Before I get to the crazy idea of the twins becoming second graders, I'm going to write this out before I forget.  Yesterday I told Easton he is not great and he was sad.  I am perfectly happy with the way the conversation turned out and have no regrets.  He started karate a few weeks ago and participated in a total of 10 classes.  I asked if he enjoys karate.  He responded with a half-hearted "yep.  It's fun."  I am at the point where the $30 Groupon starter kit ran out and now we have to decide if it's worth $80 and our time as parents to continue with Easton's karate.  I didn't tell Easton how much the karate was going to cost or give him a guilt trip about going.  I just asked if he wants to continue and is passionate about it.  He said, "I'm already great at karate so I don't know that I need to go anymore."

I was stunned and perplexed and speechless as I searched for the words to give him a dose of reality.  He's spent the past seven years believing he is an astronaut and a teenage mutant ninja turtle because we cheered him on and led him to believe he can be anything he desires.  Somehow this was the moment that reality set in for me that if he wants to achieve greatness in anything, it depends on his ability to see what greatness really is and honestly compare where he is.  Over the years we gladly cheered him on with every endeavor such as ice skating, soccer, golf, and Lego building.  We say, "Great kick!"  "You have great balance!"  "You did great on building that Lego wing!"  Those were the ways we used the word great, but somehow he interpreted that to me he achieved greatness.

You and I know there is no way he is great at karate after 10 classes, but he doesn't see that.  Here's what I said:  " You can be great if you choose to stick with it, but you are not great and will not be great if you quit now."  From what I read, greatness requires 10,000 hours of practice.  Even that doesn't guarantee greatness, but it provides an opportunity.

Layla "gets it".  She is able to see the grace and strength of the Olympic figure skaters and then compare that to her own skills. That's why she is is still dedicated to ice skating.

It could be a maturity difference between boys and girls, but Layla never had false confidence in her greatness.

1. Expose the child to as many different sports and challenges and environments as possible so they will have a broader range of experiences and skills to draw from.

2. Focus the child on a few things (whatever their passion is) and pursue it fully.

Layla is passionate about figure skating and as long as she asks (begs) to go then I am happy to help her become a figure skater.  Easton is passionate about Lego building and disasters (Titanic, tornadoes, meteors).  The other things on the fringe like golf and karate don't seem to keep his interest the way his passions do.  I'm completely OK with that, but I don't want him to believe he is great at karate after 10 lessons and quit because he can't see the gap between his skill level and true greatness.

Thanks for letting me get my thoughts down here...  Not that any resolution is found, but that these are the things I'm working through as a father of twin seven-year-olds.

The first day of second grade is here for the dynamic duo.  All 4 of the Webbs are happy.  Easton and Layla are energized partly because Kendra and I talk about the wonderful greatness of going to school.  Not a single groan or pity or sarcastic remark came from our lips.  We didn't ignore the challenges they will face, but we didn't frame the idea of going back to school from the "bummer" perspective.  Some parents I heard saying, "I know you're sad that summer is over you HAVE to go back to doing boring school work instead of playing all day".  That is a death sentence for the joy of school.  We said things like, "How exciting for you to meet new friends and learn new things in topics you love like science and music and P.E.!"  It's all in how we say it.

For some comparison here is their year by year progression from the first day of classes each year: 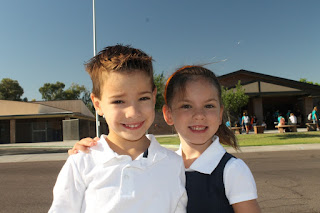 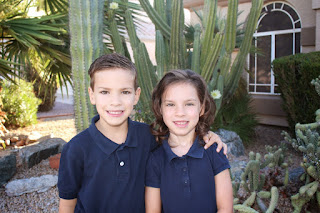 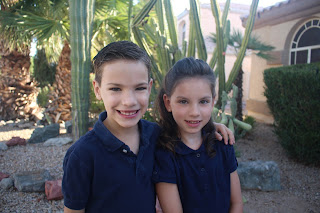 Not too much difference in the past two years, but when compared to the Kindergarten pictures it is amazing to watch them grow.

Here is Layla's first day of school look.  As parents we are loving the uniform idea at this school.  So much better than dealing with all the outfits and what is acceptable and what's in style. 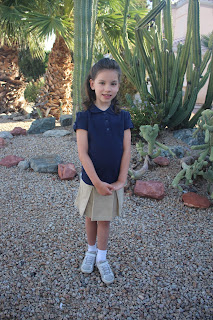 Easton's pants and shirt are a little oversized right now because we know it's going to be a long year with lots of growth where he will fit them soon enough.  His confidence is growing even faster than his long legs. 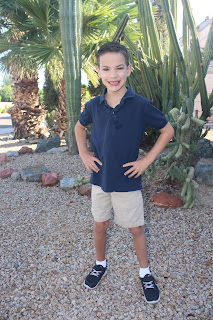 I've been taking this picture inside the front door each year to show how tall they are.  Layla is 48 inches and Easton is 49 inches tall.  I know this because they both barely made it on the 48 inch minimum height rides at Legoland last month. 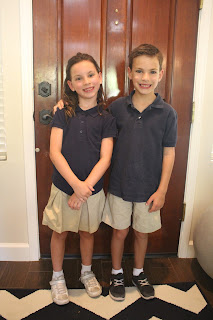 Kendra and I drove the twins to their first day of school.  I turned around with my camera and said, "Are you excited about your first day of second grade?"  Their response of "two thumbs up" was not initiated by me and proves how there are still some things about the twins where they are similar. 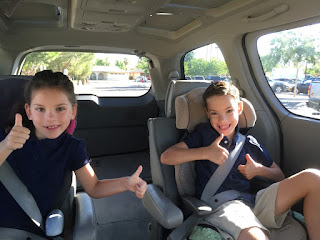 Kendra and I went for a date immediately after dropping them off at school.  kendra gets to rest during the day in between doctor visits and we get an occasional date together. 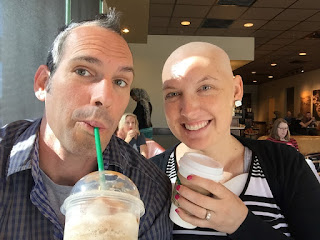 The final week before school started back was the first full week Kendra had the kids to herself since before her trip to the hospital five months ago.  The kids were reconnected with Kendra and she was rested and prepared for the one week marathon of mommy time before they headed back to school.  One of the cool things she did was paint their faces like a kitty and a dog.  Twenty minutes of face painting led to over an hour of the twins playing together with their imaginations of being a cat and dog. 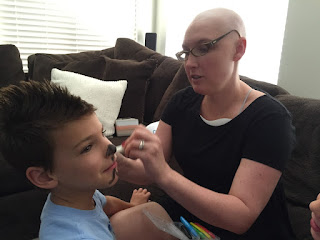 This is randomly thrown in here, but the moment held significance.  Layla somehow ended up with a figure skating magazine.  She pulled out the poster and asked to hang it on her wall.  Many seven-year-old girls have posters of boy bands or cartoons, but Layla wants figure skaters.  Of course, I agreed to hand it in her room. 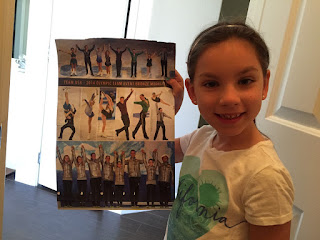 One day during the kid week marathon, her friend Tiffany brought her newborn by for some hang out time.  I was thinking, "This is what it would be like for the twins to have a younger sibling."  Everyone enjoyed the moment, but I was weirded out a little by the idea of a newborn running around our house. 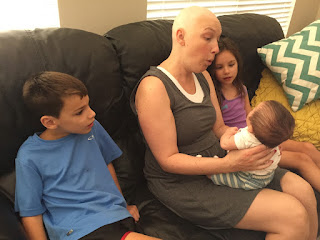 I didn't leave Kendra high and dry during her marathon week.  Every night was daddy time and even on the weekend I spent several hours with them.  One of our adventures was the free craft at Home Depot.  once per month they offer the chance to do a craft right there in the store.  Today's craft was a chalk board.  Wood, nails, glue, a hammer, and a chalkboard material were all in a neat little package.  Layla read instructions and plowed through them so fast that she surprised Easton.  He took his time as he felt every edge of the wood, lined up the corner with great precision, and stared at the tablecloth with paint all over it. 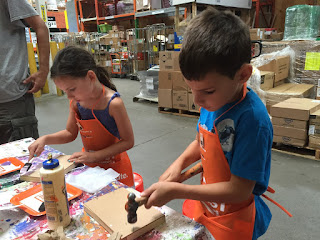 They loved the event and asked to come back next month.  Both of them got the hang of using a hammer.  That skill alone was worth the trip! 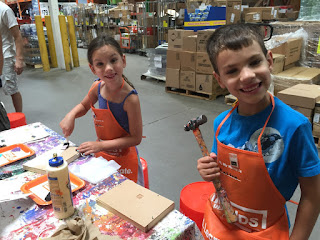 Layla drew in chalk, "Layla's room only or girls".  Good grief.  I had hoped this mindset would come along years from now, but here I am with a daughter who already knows to keep boys of out her room.  She made sure Easton and I knew we are both still allowed into her room, but no other boys. 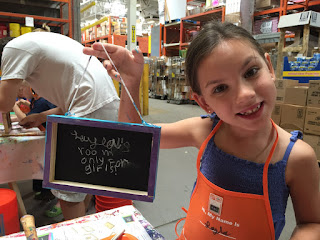 I stopped by Starbucks with the twins for a muffin and noticed they each grabbed a coffee stir stick.  They had a Star Wars light saber duel complete with sound effects and acting.  It's tough to tell whose arm was cut off and arguing didn't seem to solve the question of whether Han shot first or if Layla struck first with the stir stick. 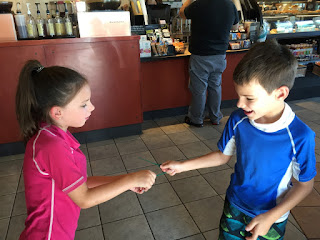 I hesitate to say "We are ready", but we are starting at a long stretch of being in town for the next three months with no breaks for Kendra's relentless chemo schedule.  The kids have school.  I have work.  Kendra has healing to receive.  That's our focus!