Legoland for the First Time

Easton and Layla woke up on Legoland morning not knowing what we were going to do.  I let Chip, Ouma's cousin's husband, break the news since they are the ones who made it possible with a free place to stay and free tickets to Legoland.  The twins cheered and hugged like the moment when Miss America is crowned as the winner.  Wish i had the video camera rolling, but I was too busy enjoying the moment.  Meanwhile, in beautiful downtown Burbank... I mean, back at the Webb house, Kendra spent a week with her long-time friend, April.  She stayed for a week and they had an amazing time together from what Kendra said.  They slept in and left the house whenever they wanted to without caring for the kids or me. 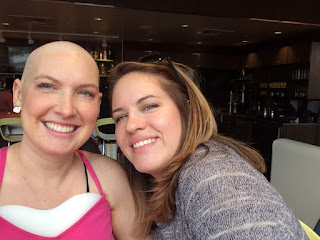 I arrived at Legoland bright and early as the park opened.  We walked into the main gates and the twins were overdosed on Lego goodness from that moment on.  I'll cut to the chase and list out every attraction and ride we enjoyed.  The age-appropriate rides fall into several ranges based on height.  48 inches is the sweet spot because they can ride every ride in the park.  Although some rides like the Knights' Tournament require an adult to ride with them under 55 inches.  Also, the Knights' Tournament requires the removal of all earrings.  For this reason, Easton rode and Layla watched because she didn't want to take hers out.  Anyway, here's the list:


One of their favorites was the Driving school.  A large Lego "city" with streets and a real driving experience.  They both did great on this and rode it twice in a row because the line was so short in the morning. 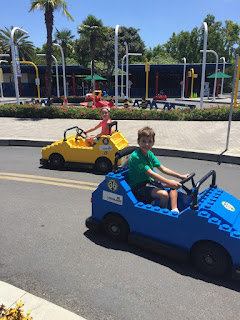 There are massive Lego sculpture like attractions all over the park like this big shark.  I love their scared faces. 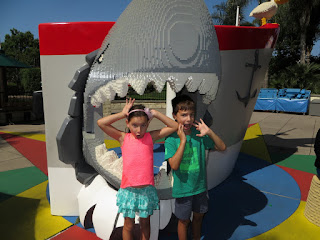 The Bionical Blaster is like the teacup ride in Disneyland.  I rode it with them and no one puked.  I call that a success. 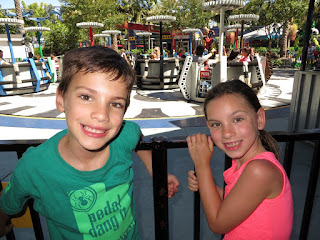 There is a Lego Friends area of the park that we didn't get to spend much time in, but when Layla saw all these lifesize figures she wanted a picture with them. 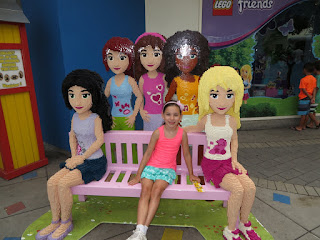 The boats were another cool ride where Easton and Layla were the captain of their own ship.  I could have rode with them, but they were willing to steer their own separate boat around so I agreed.  Layla was in a traffic jam making friends as they motored around. 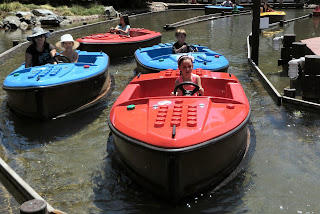 Easton was completely focused on staying between the bumpers and avoiding other boats.  He said, "slow and steady wins the race, right Dad?"  as he puttered by. 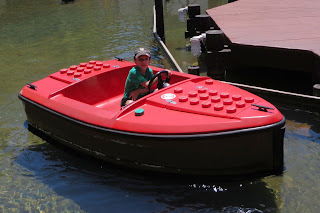 The bathroom signs across the park are Lego people with funny body postures.  I convinced the twins to mimic the boy and girl on the signs. 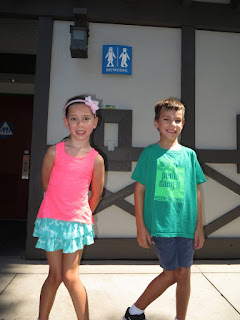 Not many pictures with me in them because I was either participating in the ride or capturing pics and video of them experiencing the magic of their first time there. 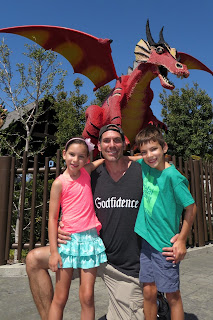 That brings me to the big "ah-ha" moment or revelation I had from these two days of adventures.  I capture the first and the fun adventures, but I never capture the last.  I love seeing their minds expand and their hearts soar as they experience life adventures.  However, for every first there is a last.  I can't remember the last time Easton spit up and needed burping when he was a baby.  There was some change that made that particular aspect of daily life no longer necessary or acceptable.  I can't remember the last time the twins took a bath together.  At some point we figured out they were too old for that and it stopped.  Or the last time Layla did the hot-dog dance from Mickey Mouse Clubhouse.   She's too coll for that now and there is no picture or blog to commemorate the loss of the hot-dog dance.  I'm not sad about it, just a realization that for every "first" and blog-worthy adventure there will also be a "last".  My greatest joy is being involved in the moment without taking it for granted.