Welcome aboard, friends and family!

The 4 Webbs...  I mean... three of us, without Kendra, drove south from Sacramento to hit the East side of the LBC.  That's Long Beach for those of you who didn't grow up with Warren G.  Kendra rested peacefully at home during her two-week marathon of joyful alone-ness.  Along the way we stopped to gas up and wash the bug guts off of the windshield.  The twins jumped out of the van and begged to help wash.  How very helpful of them. 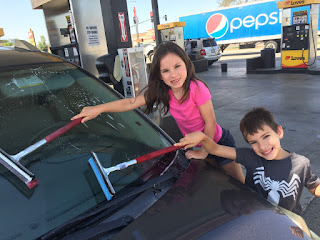 The trip there was uneventful, but the anticipation was so thick in our van because they had no idea where we were going.  We pulled into the port at Long Beach and Easton looked out his window.  The massive smoke stacks of the Queen Mary cruise ship caught his eye and he pointed out how real it looked to Layla.  I had them watch a documentary on Netflix the day before so they knew what it looked like.  They began questioning what it was and I wish I had that moment on video.  We stepped out of the van with furrowed brows as they tried to figure out how the thing off in the distance looked so real. I informed them it was the REAL Queen Mary and they burst into loud screams of disbelief and excitement.  Once they settled down long enough to turn away from the ship I took this. 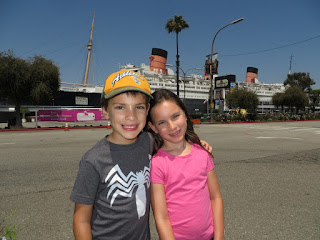 We went aboard the ship and Easton noticed a sign that had the word "Lego" on it.  This was another surprise he had no idea about, but I did.  It's the biggest Lego ship in the world and it's a replica of the ship it sits in.  Easton was beside himself.  Layla was impressed.  The worker lady mentioned there is a Princess Leia Lego minifigure onboard somewhere.  We spent the next 10 minutes finding the Princess... 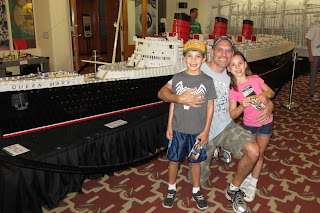 Here's a short video clip of the first few moments when we discovered the hidden treasure of the Lego Queen Mary.


Once we exhausted the worker from the twins' relentless questions we did an audio tour of the ship.  These are the guns that were added when she hauled troops during WWII. 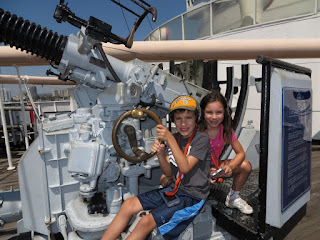 The bow was massive and amazing.  It's hard to describe the magnitude of this thing, but anyone who's been on a big cruise ship already has a correct mental image. 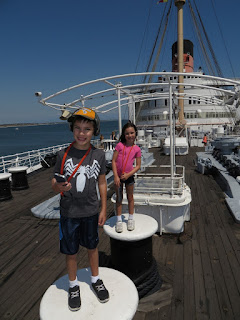 I asked Layla to climb up on this for a picture and she immediately struck a pose like a princess.  I guess 5,000 pictures per year has an effect on how comfortable a kid is in front of the camera... 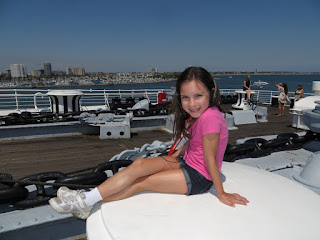 One of the long walkways inside the ship contained massive models of other ships.  The first thing Easton said when he saw the hall of models was, "where is the Titanic?"  and he sniffed it out. 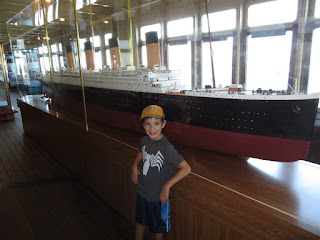 Exposing the twins to new, mind-expanding concepts is one of my favorite things in life.  It's just a ship, but I love these moments where they comprehend the size and scale of something so much bigger than them. 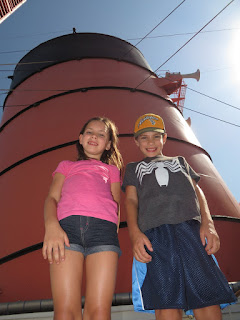 The haunted tour was included in our Groupon package and was supposed to last 45 minutes.  Layla made it for 4 minutes.  When they shut the lights off over the first class pool and turned on the spooky lights and screams of a little girl, it was all over for Layla.  She cried and cuddled next to me asking to leave.  I quickly motioned to the tour guide and he showed me to the chicken exit.  We popped out into the light and I felt horrible for a few minutes as Layla recovered.  Easton was not phased one bit.  I was most proud of him for comforting Layla with hugs and reassuring words that everything is OK.

We joined the historical tour and listed to the boring old dude drone on about useless facts.  Luckily, the twins were mesmerized by their surroundings that we didn't have to depend on the zombie-like guide to keep us entertained.  The ship was more than enough. 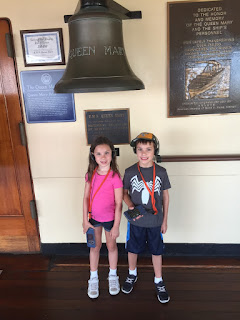 Easton asked to see the engine room repeatedly so when we got there we spent a while in awe and wonder taking in the size of one of the fastest cruise ships ever built. 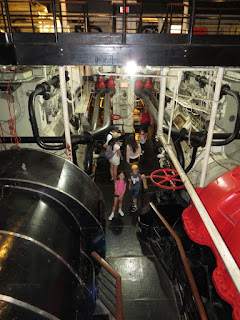 There wasn't much to touch or do on the tour.  It was entirely historical and visual, but occasionally the twins found something legal to climb on. 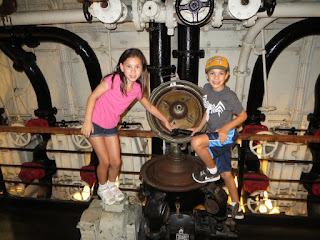 My last surprise of the event was dinner aboard the Queen Mary.  We ate at Chelsea's Chowder House.  They thought they were royalty.  It's possible to stay the night inside the hotel portion of the ship, but we were content to just share a nice dinner together. 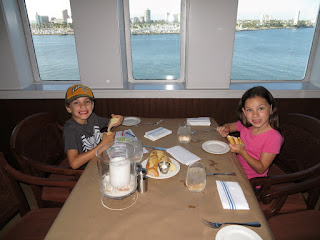 We drove on down the coast to Carlsbad where we stayed the night with Chip, Ouma's cousin's husband.  Her cousin works at Legoland and she offered us free tickets to Legoland and a place to sleep for free.  There's no way I could pass up that kind of an offer.    The sunset over the ocean is a rare background for these two desert dwellers. 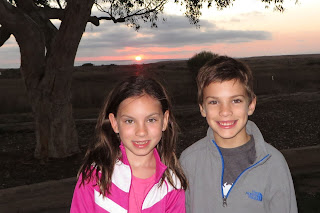