Well, we set a record for the hottest June 17th ever in Phoenix.  That's not the kind of records I like to be a part of, but the 4 Webbs are staying cool in pool.  We wear swimsuits more than we wear pants!  The twins are starting to get the hang of chores and pulling their own weight around here.  Layla is a top-notch duster and window washer.  Easton is a Swiffer mop king.  With Ouma and Oupa's help we prepared our house for a party to honor our friends who are moving to India. 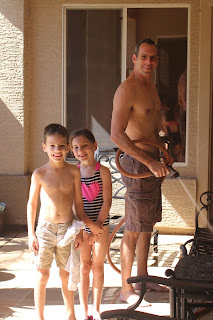 Guess who also helped?  Kendra.  She helped a little too much and her back was slightly sore for a couple of days.  She feels so well that it's hard for her to stay down and rest.  I had a great idea for a picture, but it didn't turn out like I wanted it too.  I wanted our big saguaro cactus to represent cancer and the bouquet of flowers to represent everything else that lovely in Kendra's world.  Her focus on the flowers doesn't deny the existence of the cactus, but it sure makes the world more lovely when her eyes are on the flowers instead of the cactus.  I may try to capture this another way, but my camera skills are way below my creative ideas. 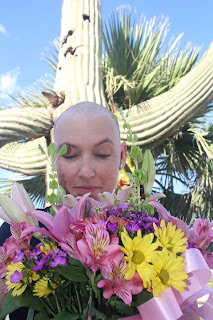 Easton asked for a Lego Titanic.  However, Lego doesn't make a Titanic... yet.  So I bought him the Cobi version, which is a knock-off brand of building blocks.  He loves it, but he is still very interested in a Lego version.  I found an idea page on the Lego website where people submit ideas for Lego to build.  If the idea gets 10,000 supporters within one year, then Lego seriously considers building whatever it is.  The Lego Titanic reached the 10,00 supporters and now the ball is in the Lego team's court to figure out if they can do it.  I put Easton in the middle of his three biggest building block accomplishments just for fun.  He built the 2005 piece Mega Blok Endeavor Space Shuttle, 450 piece Cobi Titanic , and 1,350 piece Lego Star Destroyer.  He's like a machine when he gets a new set.  The morning after we found the Lego Titanic idea website Easton crawled in bed next to me at six o'crack in the morning and asked, "Dad, do you think the Lego team is going to approve the Titanic?  I really, really want it."  Kendra and I giggled at the intense focus this dude has on what he's passionate about. 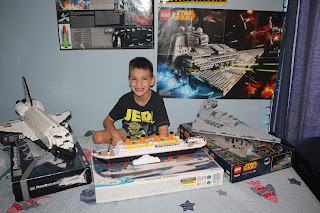 Easton is finished with figure skating.  He always felt like he was in Layla's shadow because of how quickly she advanced and her head-start on the ice.  He is fairly competent on ice skates and that was the main goal.  Now he gets to be an individual at something... martial arts. He's really getting into it, especially since he can be the one to describe all the moves and lingo to Layla.  After his third class they gave his belt a stripe, which is just a wrap of duct tape.  He earned it for obeying directions and breaking a board with a kick. This is what "proud" looks like. 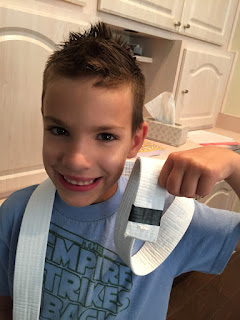 Layla is continuing her advancement through the ranks of figure skating.  She absolutely loves it.  We've never once had to convince her to get on the ice.  When I look back at the shaky legged beginner videos from last year I am amazed at her progress.  Besides, I get to sit inside the 35 degree skating arena with my coat on while the rest of the family sweats their booty off in the 115 degree temperature.  We give Easton and Layla choices.  We want them to be individuals with their own individual passions and talents.  We've always allowed them to choose their path in life and enjoy the wonderful consequences of their good choices. 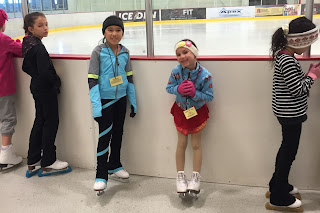 The lady in the picture below is Bernadette.  She is a chemo patient who is about six months ahead of Kendra on her cancer journey.  Last year when she found out about the cancer in her body I had zero idea about what that really meant for her daily life, pain, or uncertain future.  Then all of that changed when Kendra found out about the cancer in her body and we've spent the last three months working through this process.  I used to give Bernadette a nice church-appropriate side-hug and a "God bless you", but not anymore.  Now when I see her I can really see her.  I see where she's at in the process.  I celebrate the little victories of her showing up to church.  I feel the pain of her toenails popping off.  I listen more intently when describes the doctor's responses.  There is nothing good about cancer, but my compassion for those who are going through it has exploded as a result of what we are going through.
For the rest of my life, no matter what happens with Kendra, I'll always be able to identify with the Alices of the world in a way I never could have before.  I am thankful for this... the ability to love with compassion and an understanding of cancer patients and survivors. 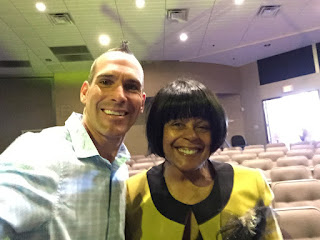 and people who break their back.  Kendra's brace has the Wonder Woman sticker on it.  front and back.  She is Wonder Woman.  This brace is on her every waking minute of every day and she's tired of it already.  It's been three months and Kendra still has three months to go.  We are continuing to believe for complete healing and full restoration of her vertebrae.  This is the prayer we focus on most intently.  This thing needs to go and it will after the doctor says it's OK. 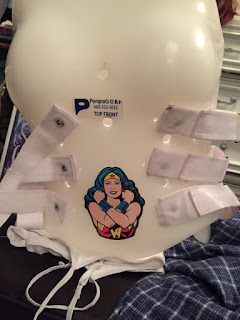 There is a heat advisory for the Phoenix metro area.  The advice is to stay inside unless it's absolutely necessary to be outdoors.  Or in our case... we just really want to ride mountain bikes.  My buddy talked me into riding a couple of hours across the sweltering desert.  I enjoyed every sweaty, heavy breathing moment of it.  Was this a good idea?  probably not, but we survived and I got some good exercise in.  I drank about 100 ounces of water and never urinated.  Now that's hot.  October is coming! 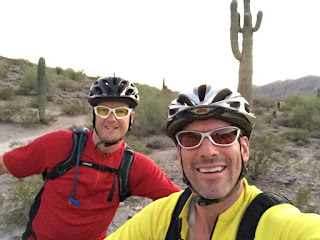 It was great to read your blog today! I am so proud of Easton for his martial arts belt stripe! You seem to be doing super through your "valley of cancer" but I know that the Lord has been right beside you, guiding you each step of the way. We are gearing up for the coming wedding on the 4th. Larry and Judy plus Phil's sisters and some of their kids are joining the celebration with us. We will miss the 4 Webbs being a part but totallly understand your staying close to Kendra and kids.
Here's sending my love and prayers your way. Miss you soooo much.
MOM