Over the past few weeks I've had so much to say about going through the healing process with Kendra and cancer and a broken back.  The trouble is that I've had a difficult time putting language to what it's like to be the 4 Webbs.  The short version of the status update is that Kendra is doing very well.  She is one-third of the way through her chemotherapy!  That is something to celebrate.  Kendra is tired virtually all the time.  She's also tired of being tired.  I'm tired of doctors and hospitals and Kendra's week being consumed with trip after trip to go sit in the doctor's office for hours on end.  But, no matter who is tired of what, we are only one-third done with chemo and then she gets 5 weeks of daily radiation through the end of the year.  We are almost to the half-way point of the year, but I was ready for 2015 to be over as soon as the schedule was laid out for Kendra.

Kendra spends much of her time like this:  lying on her side in bed.  It's boring and mundane and grates on Kendra because she is normally so outgoing and always on the move.  Her heart is genuinely peaceful and lively, but there are moments when she is frustrated by her lack of mobility or discomfort.  This is just a season and we both recognize it, but that doesn't make it any more tolerable. 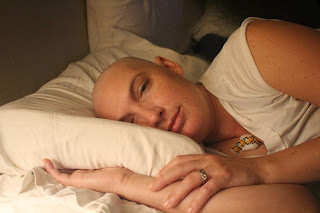 Now that my whining is over I'll add the other side of this dismal coin by admitting 2015 promises to include the absolute most incredible moments of our relationship and as a family that we've ever known.  Our relationship is stronger than ever, which seems to be a very odd thing to declare given the circumstances.  We are more open with each other in conversation.  We are more "in the moment" than ever before.  We are more compassionate towards each other too.  not that we are perfect though.  There are times when I react in a harsh tone of voice and then later I think, "Did you really just bark at your wife who has a fractured vertebrae and is going through chemo?  What kind of a person are you?" and then I remember I'm human just like kendra and everyone else.

Our marriage life-group is going very well.  24 people keep showing up each week so we'll continue the series.  We are seeing great breakthroughs for the couples who are attending and more importantly, we are experiencing shifts in the way we relate to each other.

We've been very protective of Kendra's time and involvement with hosting.  This good-bye party for some friends from church was a big effort on Kendra and Ouma and Oupa, but it was very well worth it so honor them as they go back to India.  Here's a good representation of Kendra being her lovely self and hostess for the conversation on our back patio.  We are using our house for ministry and gatherings because that's what it was designed for.  Besides, Kendra truly enjoys the preparation and party times. 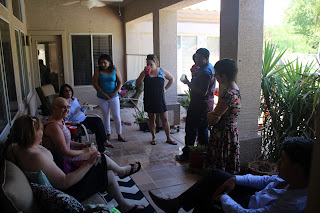 Another day we welcomed Kendra's cousin Brianne and her family into our house for a day.  They came to Phoenix on a tour of visiting friends and relatives.  The last time we saw them was at their wedding when the twins were just a year old.  We had a great time catching up and being family. 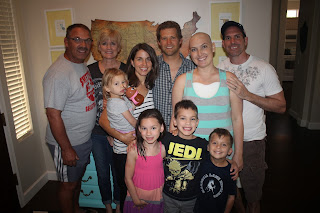 Easton is four lessons into his Taekwondo Black Belt.  He is convinced he can get there.  not because he's seen mine in my closet, but because his soccer friend is in his class and he has a black belt already.  Hey, whatever gets his motivation moving, right?  He looks forward to going to class twice per week and is learning a whole new level of discipline and respect!  Easton is also getting kicked by a girl.  I'm so happy about that.  These girls who scream "Hi-yaaa!" at the top of their lungs while kicking Easton's pad are teaching him how to respect women also. 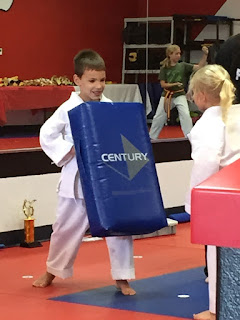 Layla experienced her first week of cheer camp.  Our neighbor's daughter is a cheer leader and she helped us get Layla into the cheer camp.  Layla has found her dual calling in life.  She loves figure skating more, but cheer camp opened her eyes to a whole new level of expression and gifting.  For the final day I went with Ouma, Oupa, and Easton to watch Layla perform.  Kendra was stuck getting a blood transfusion, but we have plenty of play-by-play stories to catch her up.  As the cheer leaders entered the gym Layla scanned the crowd intently until she saw where we were sitting.  Then as she sat with her class we waved back and forth several times. 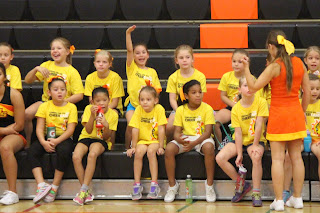 Layla watched the high school cheer squad perform for them.  Layla is waving at the cheer leaders during their performance because she got to know a few of them personally.  her charming personality always shines through. 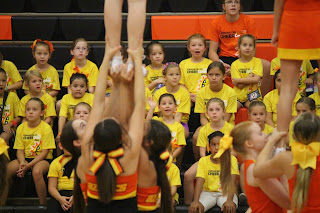 When it was Layla's turn to cheer they put her front and center in the middle of forty or so girls.  Imagine that?  Layla nailed it with passion and I'm so very proud of her for putting her whole heart into the routine.  She really blew us away with her dance moves and ability to shine so brightly in the middle of all those stars. 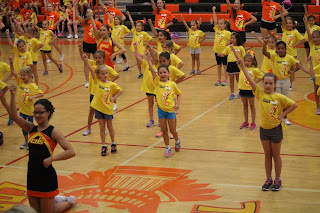 The twins also have vacation bible school this week.  that makes for an insanely busy schedule to keep.  Kendra's doctor appointments, Easton's martial arts, Layla's cheer camp, the twins vacation bible school, and somewhere in there I manage to do this thing called a job.  We couldn't do this without Ouma and Oupa.  Their presence and help is invaluable.  We will be sad to see them go in a couple of weeks.