A Ninja and a Princess

There's this old-fashion way of communicating called "the mail".  No, not email.  I mean real paper that gets magically transported across the country to the specified address.  Sometimes referred to as "snail mail" because of the extremely slow process of writing, sending, and waiting.  Layla experienced a communication from her cousin Trinity who put a picture in the mail. Layla excited to receive the letter because very few things come to our household with her name on it.  This was a special occasion!  Layla will send an equally slow, but personal response to miss Trinity and get to see the other side of the process. 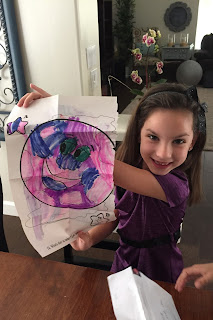 My work gave me eight free tickets to see the Diamondbacks play some major league baseball.  Easton and Layla attended the game in Oakland last summer, but have never been to Chase stadium to experience the local team.  I brought the 4 Webbs plus Ouma and Oupa plus Kendra's brother Logan and his wife Bree.  That makes eight! worked out perfectly.  As we were waiting for the game to start we walked by one of the big mascot guys who portray legends of days gone by for the Dbacks.  This was Matt Williams.  The twins have no comprehension of who this great legend is, but they gladly posed in front of him for a picture. 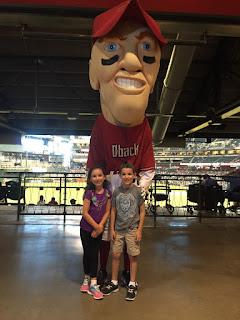 Easton asked if there are two guys in the costume.  I giggled because I can see how he would think there is one guy inside sitting on the shoulders of another guy.  We had great seats on the lower level and enjoyed an air-conditioned day at the ballpark. 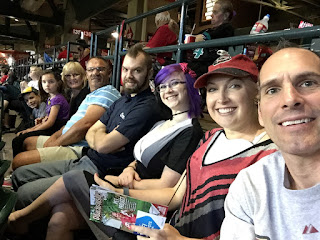 Back at the home front, it's so hot that even the local critters are dying off.  Just kidding.  this unlucky guy found our pool, but didn't find a way to get so he drowned and ended up in our pool filter.  Good thing Ouma found him dead and bloated!  Easton held him up by the tail and got a good look at all his features before throwing him over the fence to be owl food. 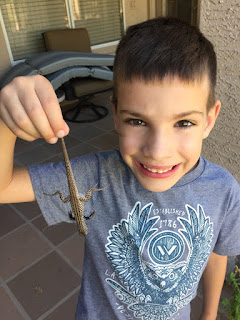 Having Ouma and Oupa around for a month is wonderful and necessary.  Kendra is going to doctor appointments several times each week and I'm going to work like a normal person lately.  That means Easton and Layla are getting a whole bunch of time grandparent time.  Ouma is Easton's hero every time she says, "let's play legos!"  There is nothing that speaks louder in love to him than playing together.  Quality time is clearly his love language. 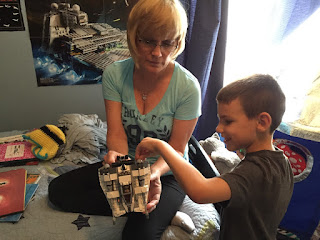 Easton is done with ice skating.  Kendra went to sign them up again for another session and Easton chose not to continue.  No big deal.  Kendra just asked him to go until he felt comfortable on the ice.  We thought he may want to get into ice hockey, but I am happy to say he has no interest in playing ice hockey.

I found a groupon for a starter kit introduction into martial arts at a school down the street from us.  I mentioned it as an option and his eyes lit up with excitement.  I took him there just to check it out and he jumped right into class. 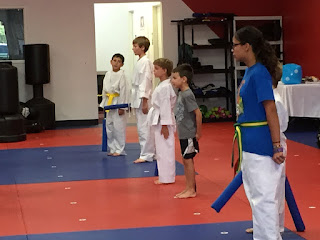 Afterwards he said he wants to come back and do it more so the instructor fitted him with a uniform and white belt.  He came out to show it off to us with a big smile on his face.  Layla found her black ice skating outfit, which went missing for the past few weeks.  She wore it for absolutely no reason at all so I took a picture of them together.  This represents their current focus of extra-curricular activity.  It's too hot for 4:00pm golf lessons from the group class they had before so this will last us through the summer time. 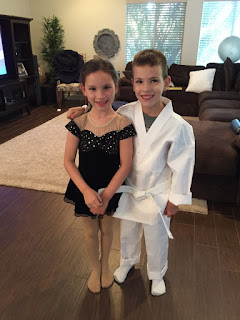 The other thing we do a lot in the summer is swim.  The water is already perfect (meaning not cold).  We left Kendra at home to rest and the five of us went to the local city pool for $6.  All of us went down the water slide and jumped off the diving boards. This was a memory Easton and Layla will probably remember forever because it was just pure fun of playing in water together in a new environment. 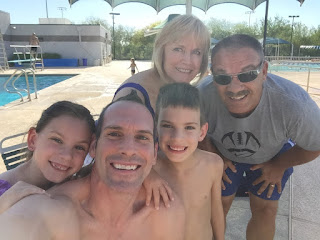 Layla and Easton have been using the same owl towels for several years now.  Layla's is getting a little short and rough so Ouma bought her a kitty towel because they spoil the twins every chance they get.  Her new towel even has a kitty tail.  Now Layla crawls around the house meowing after shower time. 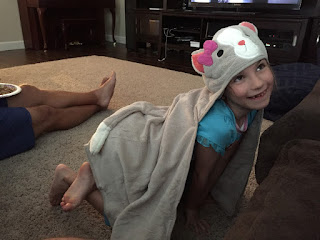 Kendra joined us in the pool today.  She is able to walk out to the pool and get in without her brace and without any pain.  This is a major accomplishment and a moment I just had to capture.  The sun is shining brightly right behind her big hat, illuminating her like a saint.  I am so happy to see her smile and interact with us as the 4 Webbs again in the pool.  These simple moments are more special than I ever expected.  I get emotional and excited about the slightest improvements because every small step towards healing is a step in the right direction.  There are so many miracles represented in this one simple picture and it means so much to me. 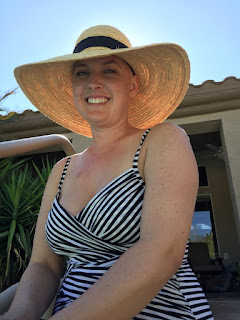 This is probaly one of my favorite posts from you. It has great pictures and lots of good commenting about them and your life recently. The picture of Kendra in her big hat is just beautiful!! I haven't been on my lap top recently to read your blogs because I use my phone for facebook and keep up with you all on that. Loving you all and looking forward to hearing more from you soon!Love ya gobs, MOM

Thanks, Mom. I'm glad you like it and I find it helpful to know what brings the stories to life. We love you and miss you.