When Failure is Success

The 4 Webbs went to see Varekai, the Cirque du Soleil performance.  I won 4 tickets at $50 each from work.  We were in a bit of a rush to get there on time so I took this picture as we walked from the parking garage into the arena. 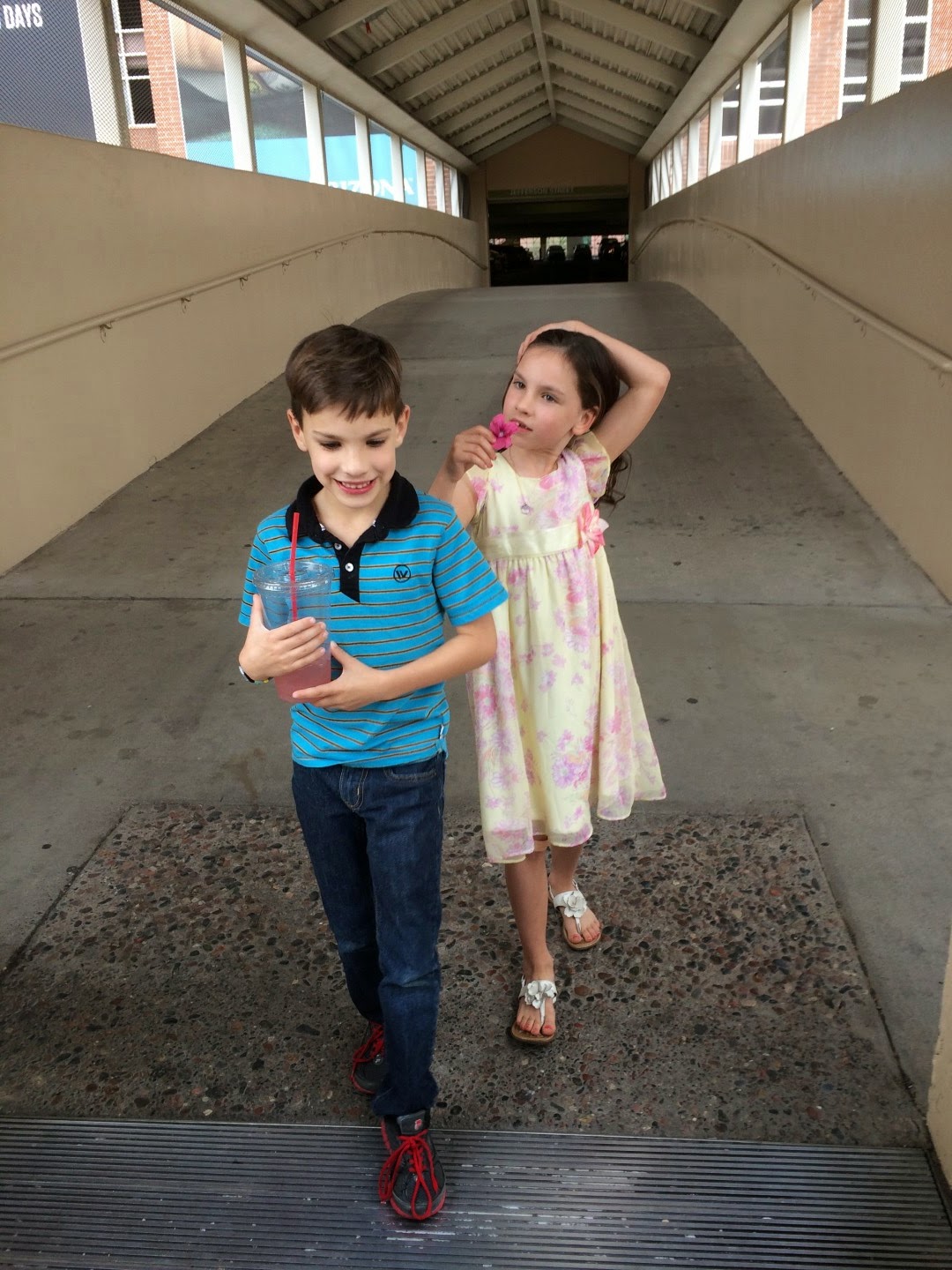 There were no opportunities to take pictures inside during the event so we'll just keep that adventure as a memory only.  The performance was very creative and well done.  The intermittent conversations were in French.  That means we could only comprehend the story based on the performance itself.  I have no idea what it was about and the twins both shrugged their shoulders when I asked them what they thought the story was about.  If you go to a circus, for example, you see a tiger jump over a man and then turn around in circles.  That's easy to understand.  However, Varekai was attempting to convey some sort of magical, mystical story about something, but it was over our heads.  That didn't stop us from enjoying it though.  The acrobatics were amazing, the costumes were elaborate, and the coordination of sounds and lights and people was fantastic.  I would highly recommend going if you get the chance.  Especially if the tickets are free.

We failed to understand the story, but succeeded in having a great experience together as a family.  The point of these events isn't always to understand, but to encounter and experience.

Anyway, back to normal life.  Layla brought home this pile of leaves and placed them on the kitchen island.  She brought me over to show me the leaves and I couldn't figure out what was so special about them until she said, "Drew gave them to me."  My brain had this little freak out moment where the Dad in me pulled on the emergency brake and locked up.  I thought, "Layla is not old enough to be pursued by a boy!"  She's only 7 years old and Drew is giving her leaves, which I equate to a first-grader's version of buying roses.

There were no less than ten ways I could have responded to Layla in this situation, but I chose to  ignore the boyfriend aspect and be excited with her from the friends aspect.  She showed me how they feel on both sides and pointed out the pretty colors.  I showed genuine interest in how and why he gave her those and what they mean.  The conversation ended well and I discovered two things:  1. There is a primal dad instinct inside me to beat up any boy who even hints at showing romantic interest in Layla.  2. The simplest gesture goes a long way with Layla (and all girls for that matter) including stealing leaves from a tree you don't own and handing the crumpled mess of leaves to her.

I failed in the way I thought about that immature boy who is obviously not good enough for my Layla, but I succeeded in responding to her appropriately because she will continue to invite me into her world when I do. 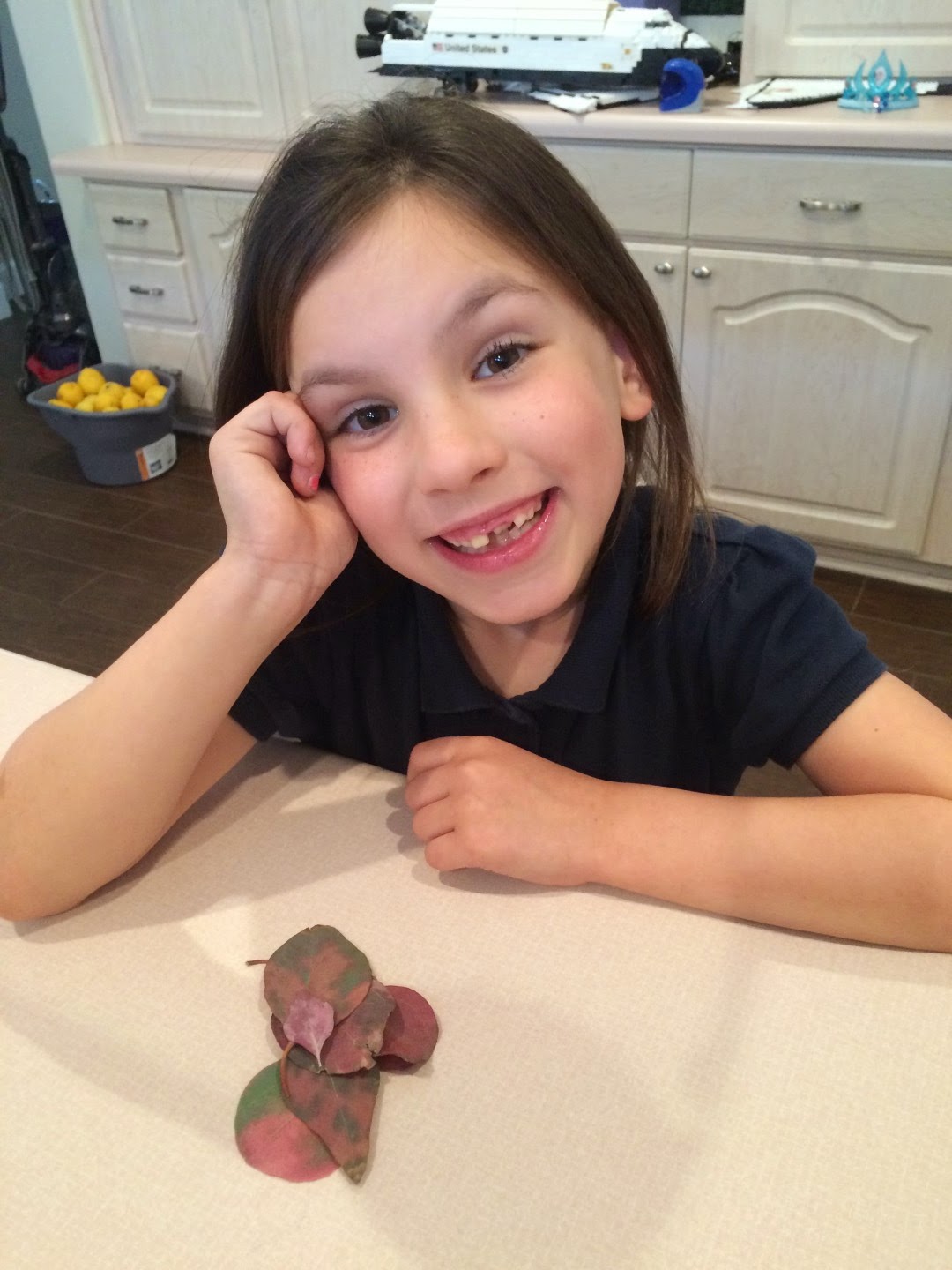 In a related story...  I brought home flowers for Kendra one night after going to the gym.  I cut them and arranged them in the vase for her to see the next morning when she woke up.  The other thing to notice is Kendra's haircut.  This is the shortest I've ever seen her hair and I like it.  Too bad she doesn't, but she'll either get to like it or wait for it to grow out. 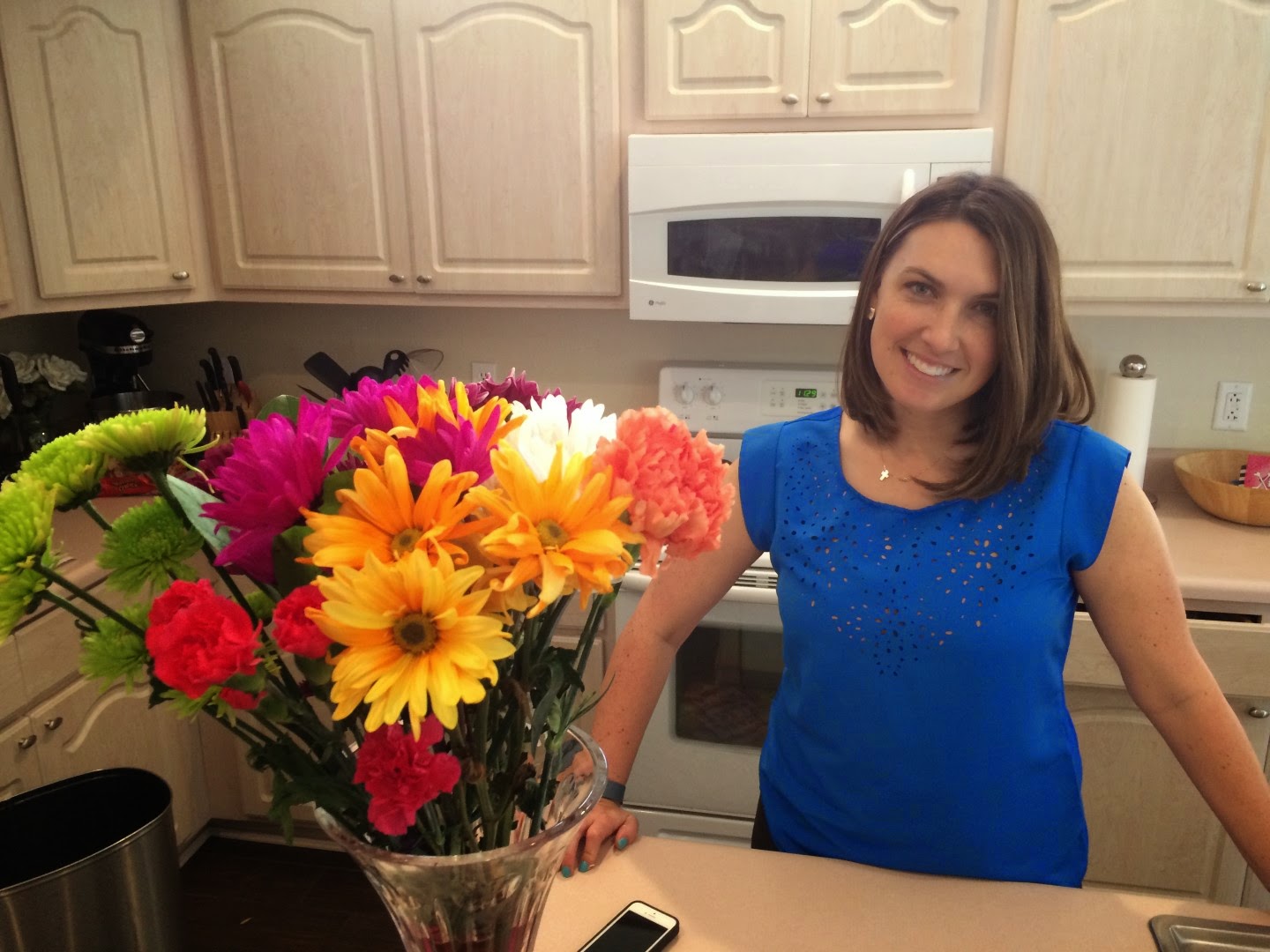 Easton and Layla are doing very well in school academically and socially.  They are reading at a pace significantly above the state, city, and their school comparisons.  The same goes for math and all other subjects.  Easton doesn't enjoy reading unless it is about topics of interest.  he gets to choose what books he uses to complete "reading logs", which are homework sheets where you describe what you read.  He's still intently focused on disasters (man made and natural) and outer space.

As parents we failed (so far) in getting Easton to broaden his horizons, but we are succeeding by allowing Easton to grow in his passion.

The goal of parenting is not to teach children to obey, comply with rules, or submit to authority, or peace and quiet or "I'm in control and you do what I say".  The goal is to steward their freedom.  The priority in parenting is connection, not control.  In other words, my priority is not to feel in control.

Most parents would say, if i de-prioritize me being in control, then what is left to motivate the child to make good choices?  If they are not motivated by fear of punishment, what will motivate them?  am i supposed to just abandon my stewardship as a parent with guidance and boundaries?  Yes!  but most people can't even fathom an approach that isn't about control.  Our parenting style is so far outside the boundaries of most people's thinking that I wonder if it's even worth explaining too deeply. 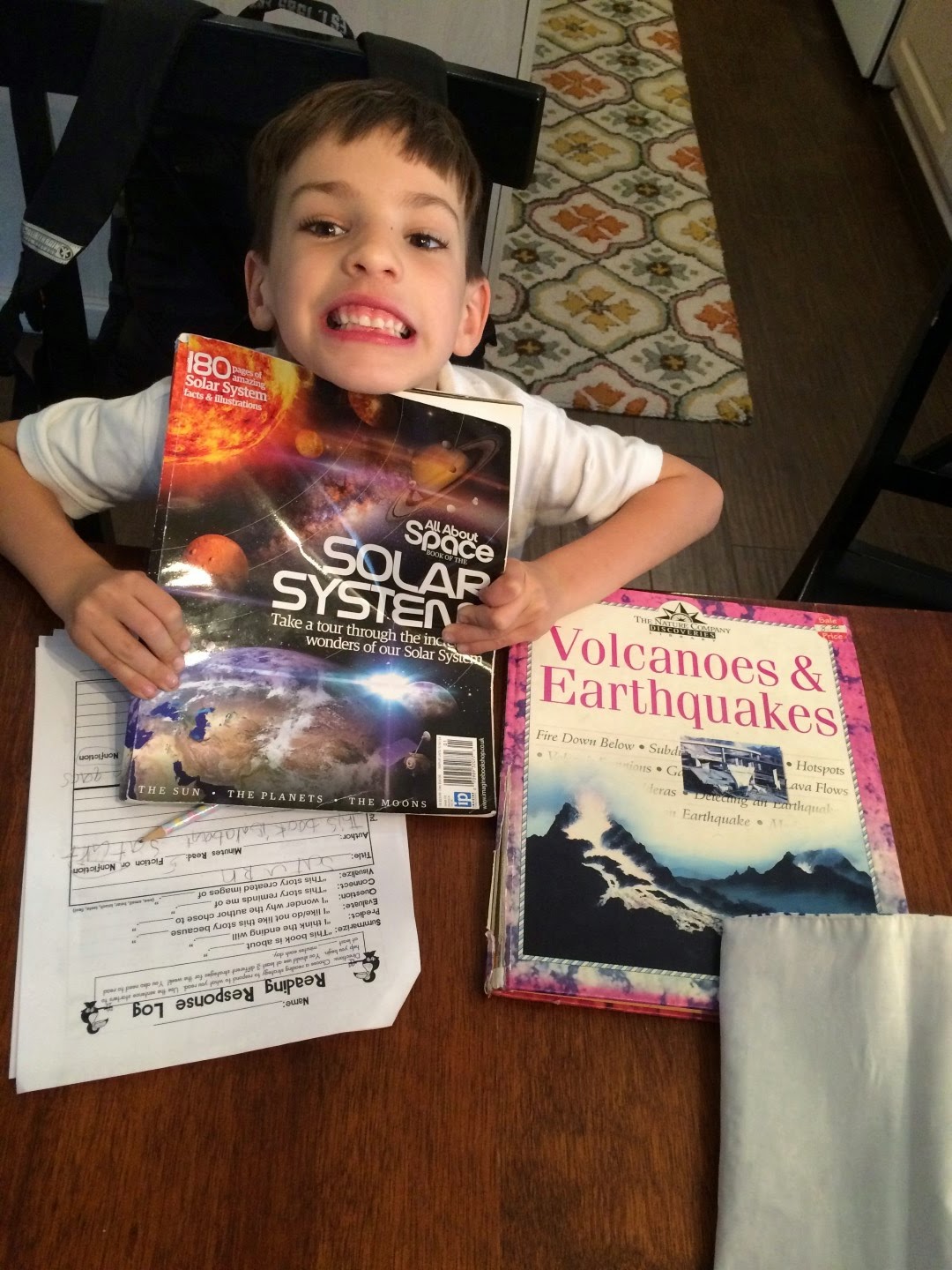 One evening I decided to do some bike maintenance.  I asked Layla if she wanted to spend some quality time with me in the garage as my helper.  I wasn't sure of her level of interest, but she agreed and we had a great time.  I taught her how to remove and install pedals on the trail-a-bike and Kendra's bike.  I gave her a wrench, showed her how to do it and turned her loose.  We both ended up with greasy hands. I enjoyed getting Layla comfortable knowing her way around the toolbox.  It's a practical life skill every child needs!  In my typical instructional method I showed her one pedal.  We did the second pedal together, then I let her do the last two pedals all by herself.  That's the way to do it!

I failed in keeping our hands and clothes clean, but succeeded in getting Layla comfortable with a wrench.  The grease will wash off, but a girl who knows her way around a toolbox is unstoppable. 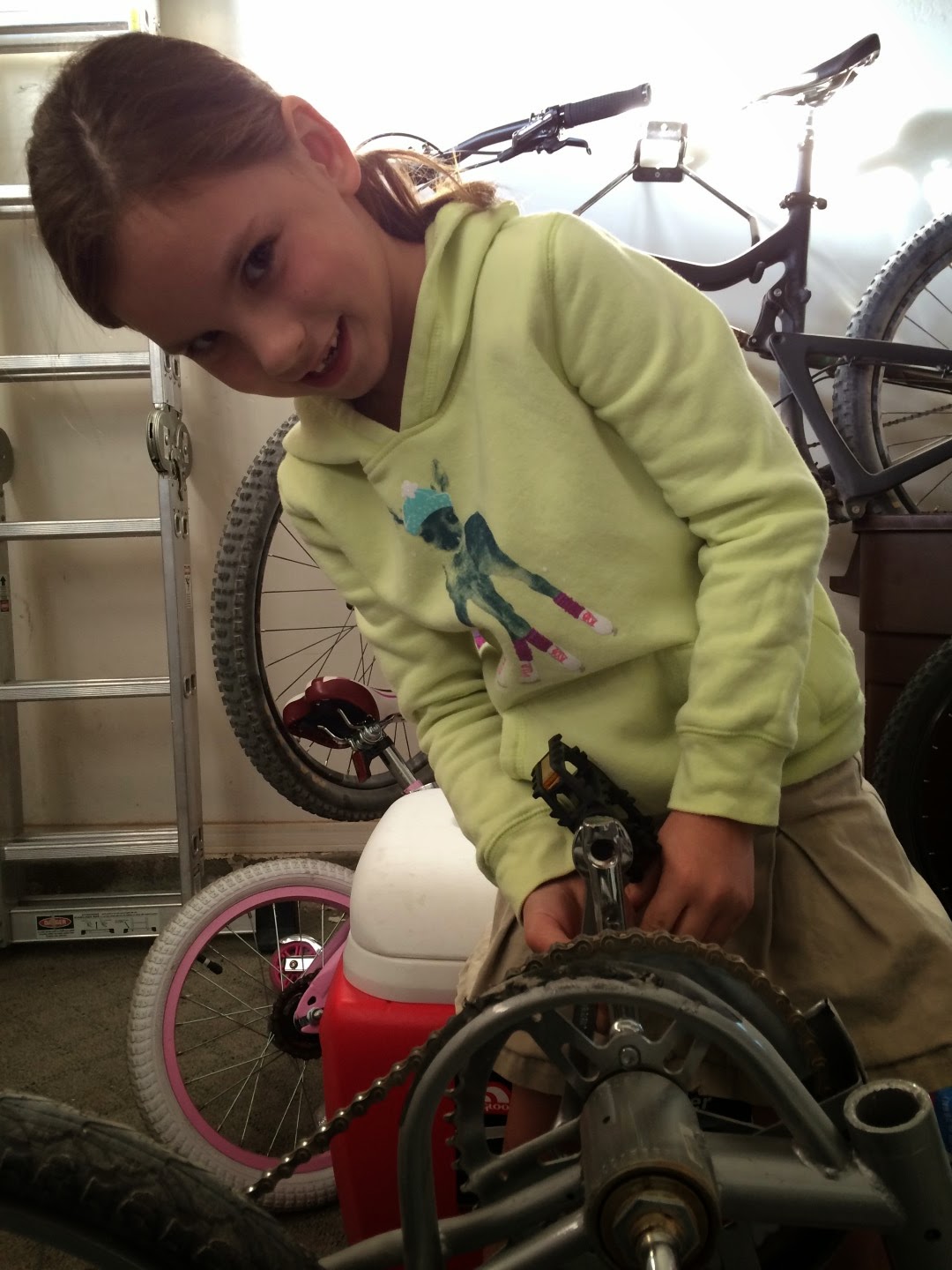 One evening I came home from work and gave the twins a few options of what we could do before dinner.  Since the wee-bump park is within bike-riding distance of our house we headed over there for some playground fun.  As we arrived we saw this little girl sitting on the end of the see-saw with no one on the other end to play with.  Layla walked right over and hoped on.  She introduced herself and asked the girl what is her name.  As the two of them hit it off I glanced over at her mom who was watching the scene.  She said, "Your daughter is very sweet and friendly."  I responded, "Thanks!  that's just the way God made her and I'm always excited for her to just be who she is.  I'm glad your daughter is so receptive and friendly back!"  Layla and her new friend played the entire time until we left the park.  She made sure to give a hug before we hopped on our bikes though.   Made me very proud to watch her show love so freely.  Easton met a couple of boys who were running around the playground too fast for me to take a picture.  His experience of meeting someone completely new and jumping into playground fun is similar to Layla's

We failed to make it home on time for dinner that Kendra had waiting for us, but succeeded in making friends by being friendly.  The most proud moment for me was watching them be friendly without me guiding the conversation or introduction.  I didn't even have to get them started.  it just happens naturally now and I love it. 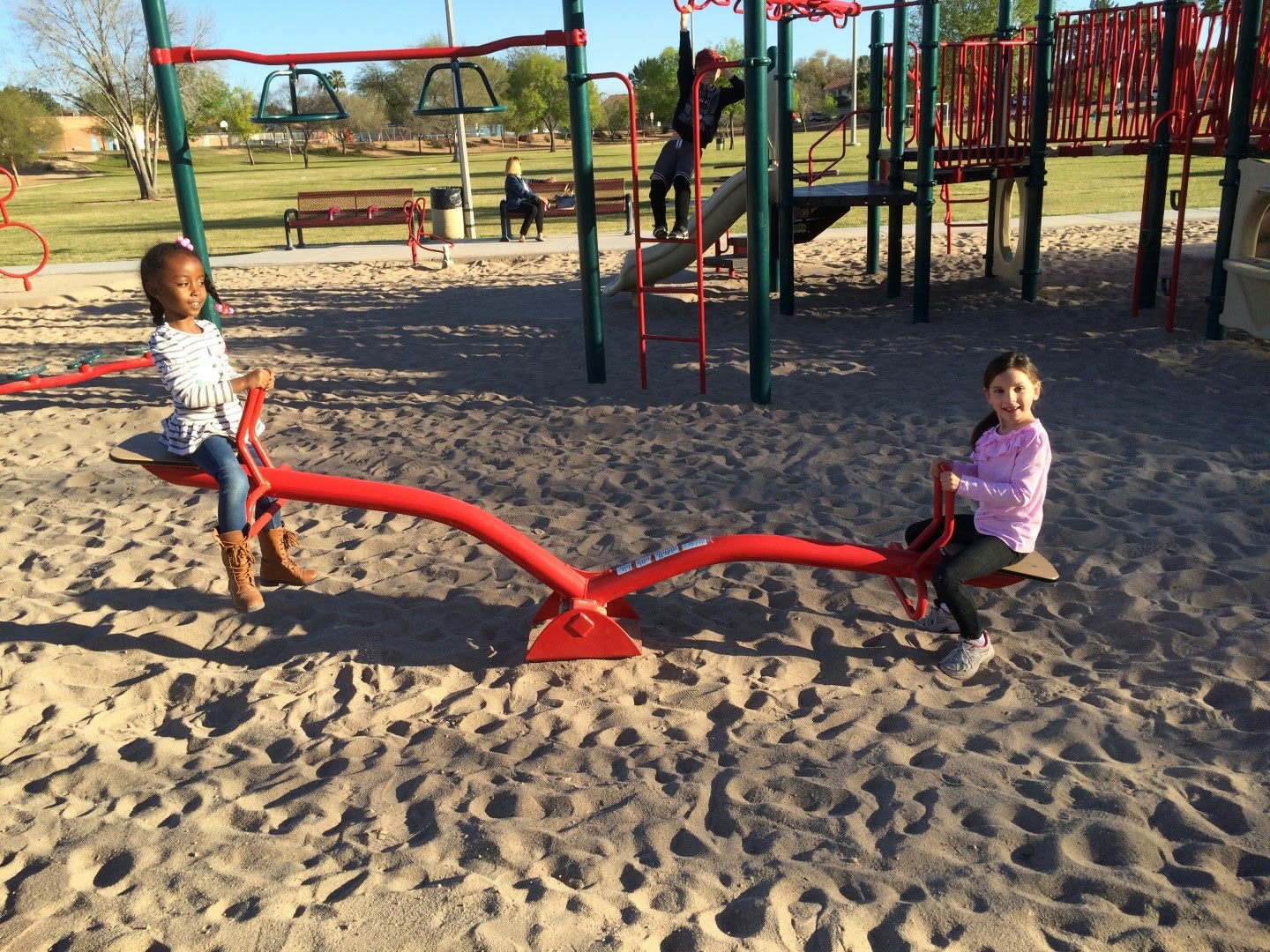 Layla bought Easton a kite for Christmas and bought herself one at the same time.  They were fairly cheap, but I expected them to work.  We had a really windy evening and decided to take advantage of it by taking our kites out for a maiden voyage.  Both of them were so poorly designed that they would go up about 10 feet and then dive down to the ground or flip over and float down.  They didn't work at all!  I had visions of us lying on the grass together watching the kites float overhead.  Well, that didn't happen even for a single moment.  I ended up running with them back and forth across the field dodging the kites as they would dive-bomb me.  The twins busted up laughing every time one of their kites would come close to hitting me on the way down to the ground.

We failed to get the kites to stay in the air, but we laughed so hard our heads hurt as we chased these things around the soccer field. 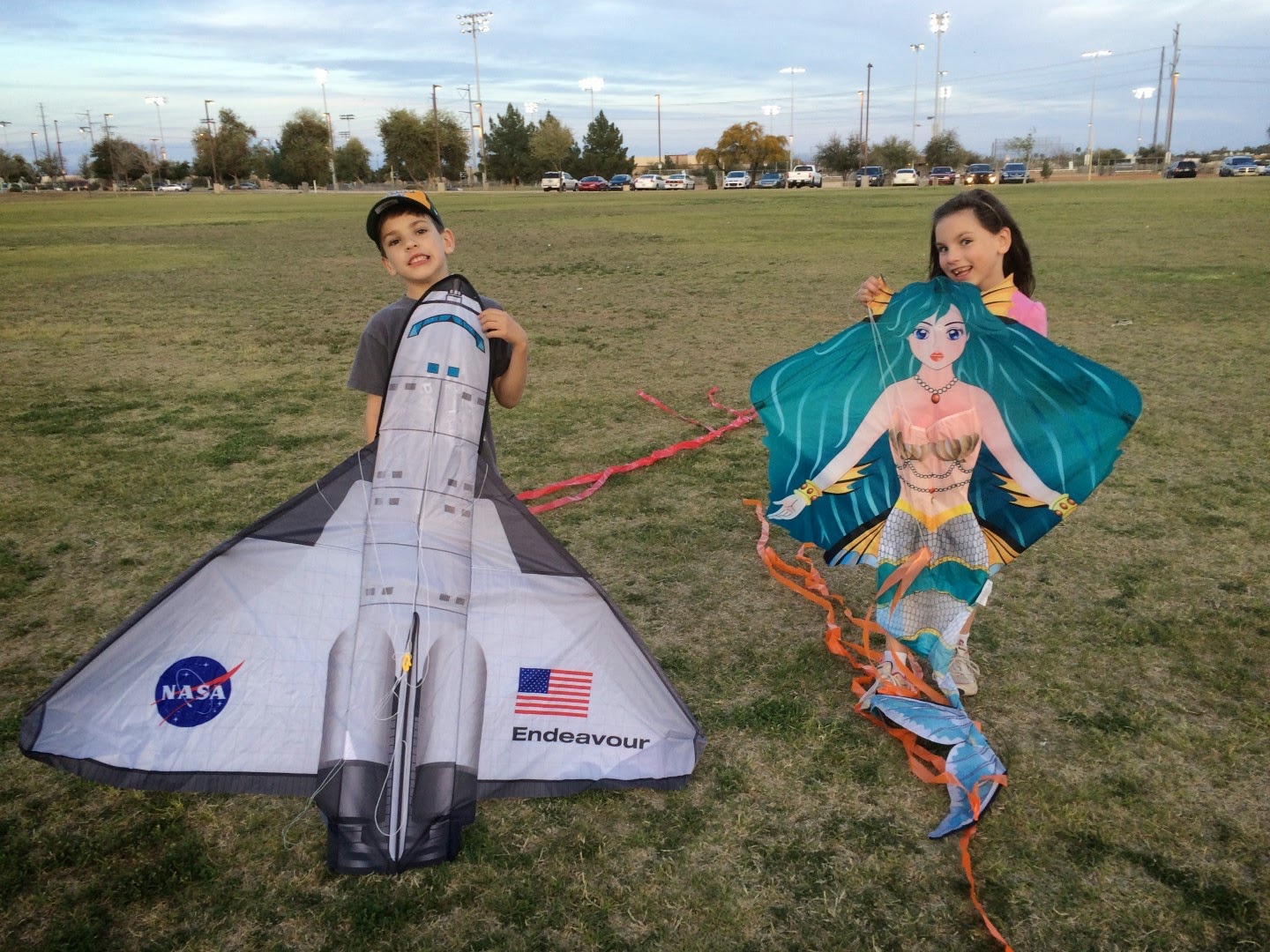 This is a lesson in failure vs. success.  Sometimes it is in the eye of the beholder whether a particular event or circumstance was a failure or success.  As you can see, I find success in almost every situation.  I'm not interested in Easton and Layla being perfect.  I'm interested in them learning from every situation and making powerful choices.