Easton and Layla's birthday week came to a close in fine fashion.  They appreciate the cards and phone calls and Skype sessions.  The mundane trips to the mailbox became a daily moment of anticipation for what would come with their name on it.  I get bills, Kendra gets coupons, and the kids get all the coolest, most desirable things. 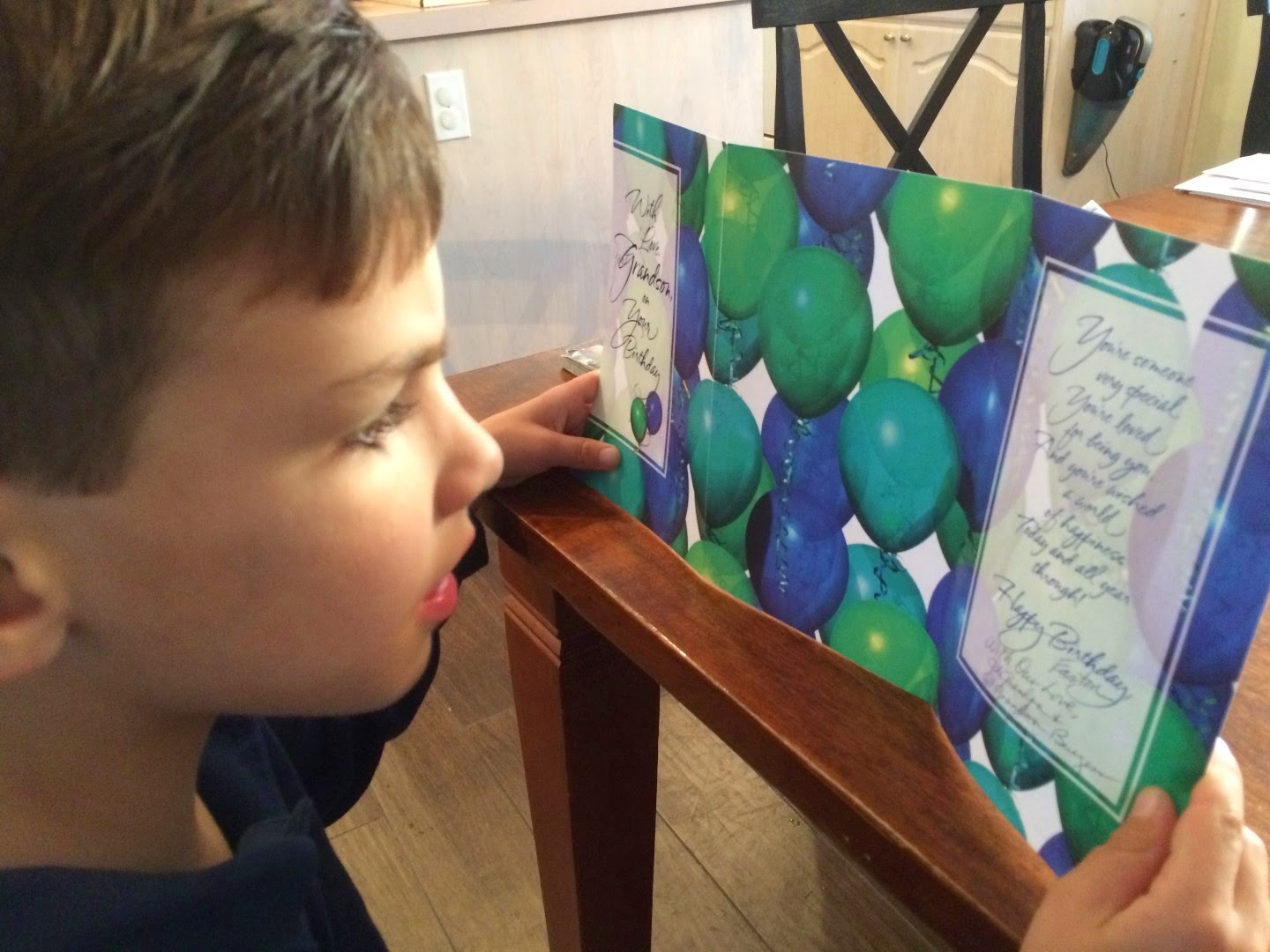 Layla reads her cards often.  For the first time in their 7 years of birthdays, they can read their whole card from start to finish. 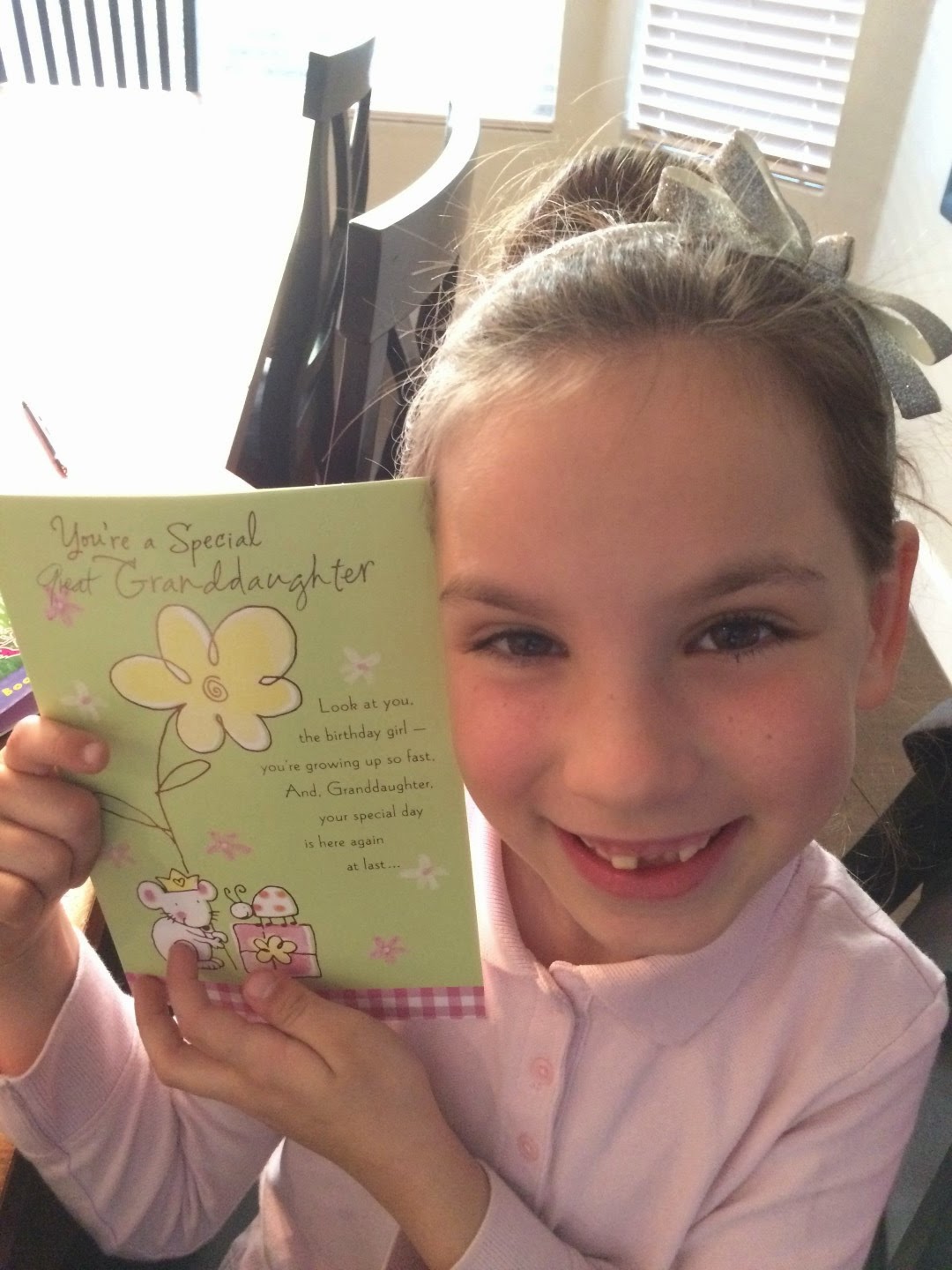 Do I feel useless as a parent now that I'm not longer needed to read their cards?  Of course not!  That's one of the main focuses of being a good parent; to empower them to be independent or rather, interdependent.

Easton took his birthday money to Toys 'R Us and went straight to the Lego Star Wars aisle.  He bought the biggest, most expensive set his money could get.  By the time we got home and ready for bed he was already 25% done with the spaceship.  We did our bedtime routine and I sent him to bed.  Kendra and I did all the busy work stuff that we put off until the kids go to bed. 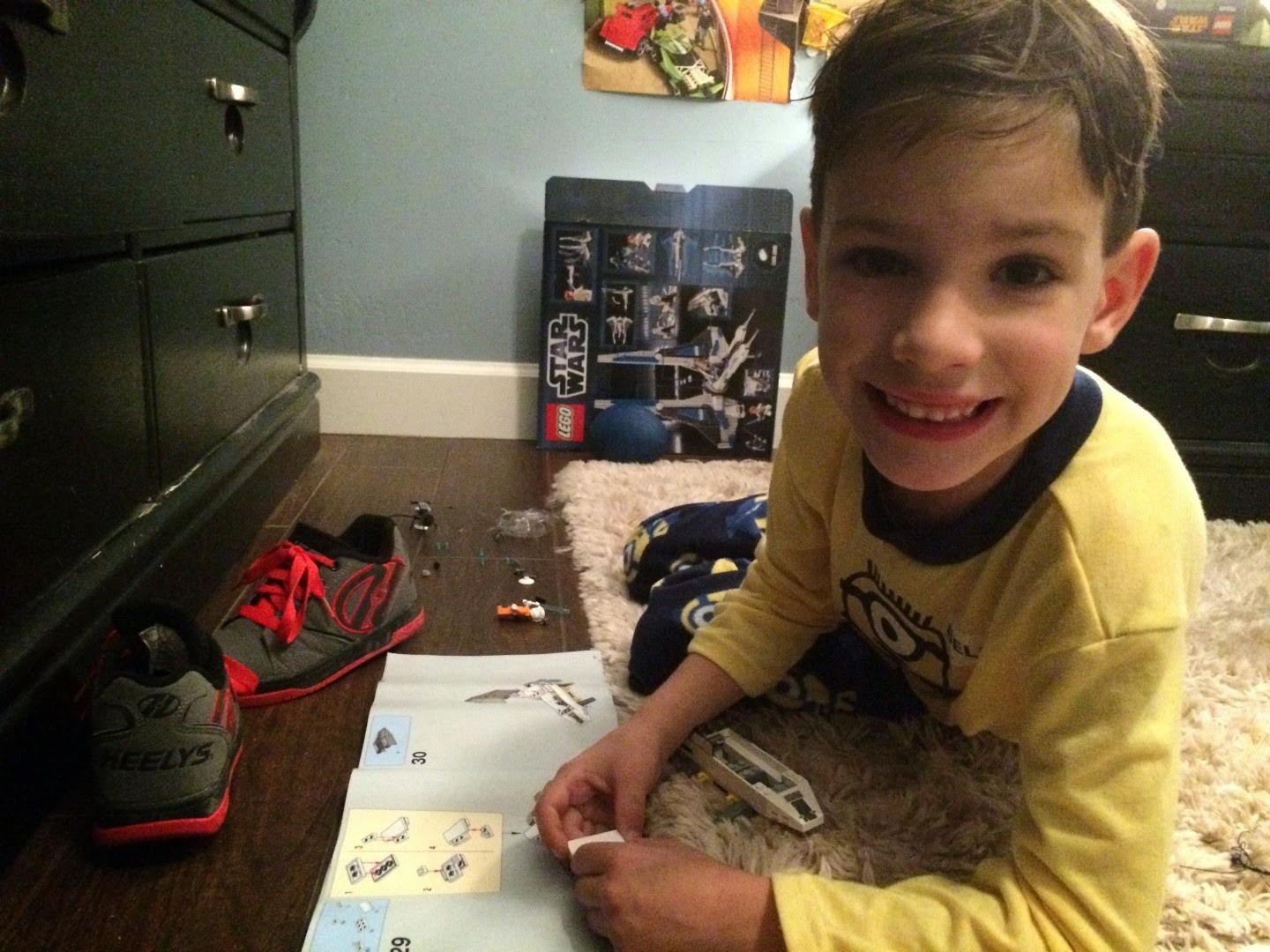 The next morning Kendra walked into Easton's room and found his ship was magically done.  He stayed up late without our knowing and put it together.  This created a couple of problems for us.

Easton made a bad choice by crossing the boundary of staying in bed when it's bed time.  For that, he had a bad consequence of a two-day timeout from the space ship.  However, Layla loudly proclaimed, "I heard Legos in Easton's room last night."  Easton became angry because she tattle tailed.  He quickly chimed in with, "Well, how did you know that unless you were out of your bed in the hallway listening?"  Aha!  He got her on that point.  So Layla had her own bad consequence.

I was impressed by Easton's passion for building his Lego set. I had a hard time giving bad consequences because he wasn't causing any problems or doing something bad.  He just wasn't doing what we asked.  Gotta pick your battles.

I got out for a mountain bike ride with my friend David.  That made my day.  The longest sickness I've ever had is finally almost gone.  It's gone enough that I don't sound like I'm going to keel over dead when I cough even when I'm huffing and puffing up a hill.  I can't wait for a time soon when I can get away for a few days of mountain biking fun instead of always squishing it into a 90 minute block of time. 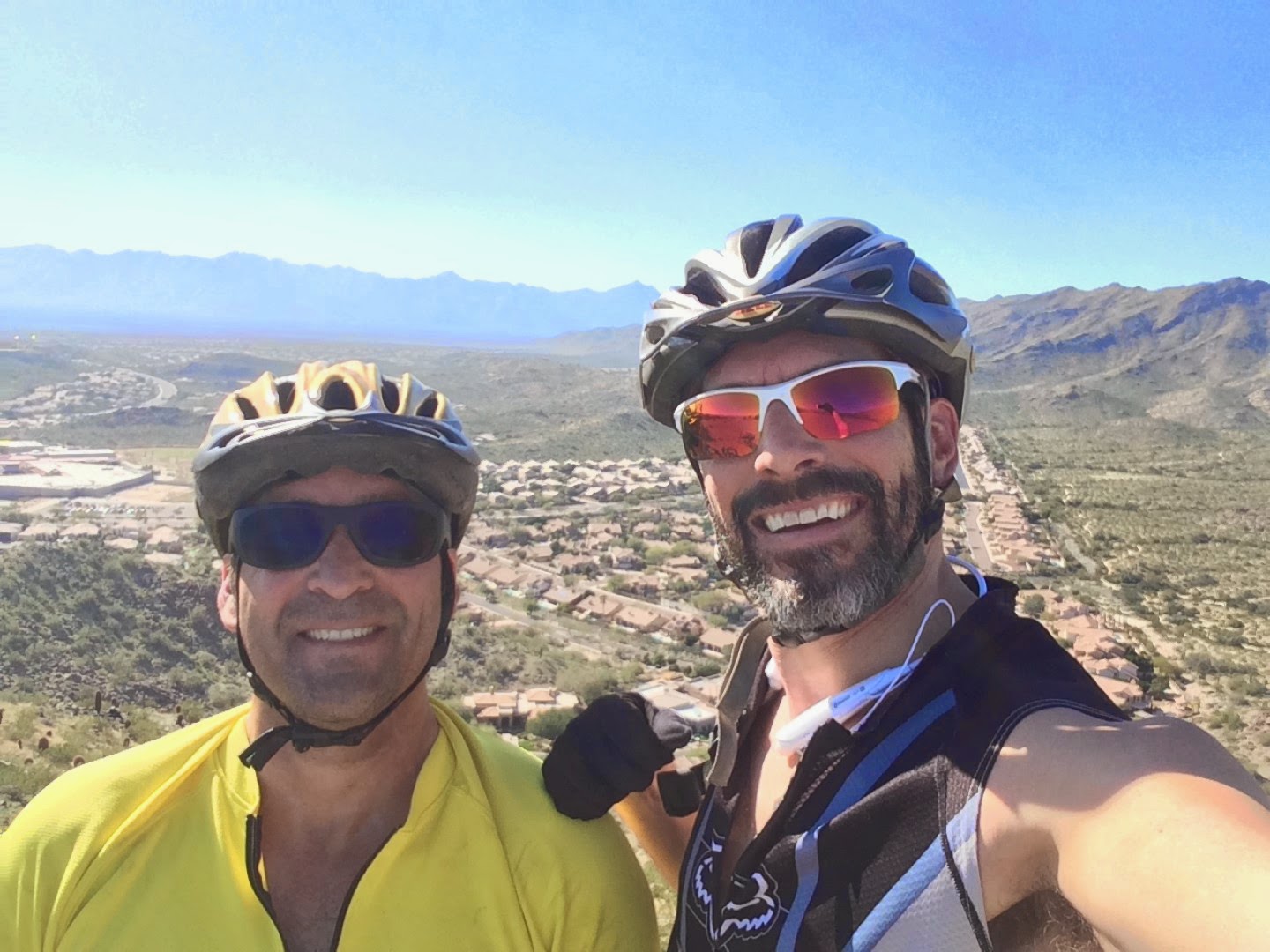 Easton and Layla's final birthday celebration included Uncle Logan and Aunt Bree.  the two of them came over for dinner, card games, and to help the twins with their homemade Valentine's day cards.  Yes, you read correctly.  Kendra is so frugal she avoided buying two boxes of Valentine's day cards for the twins.  Instead, she pulled out some pink paper, cut it into strips and gave the kids a pen to write with.  Logan and Bree were kind enough to help them stay interested long enough to complete the task.  As you can see by Easton's frown, he could care less about Valentine's day and all the "lovey lovey" stuff. 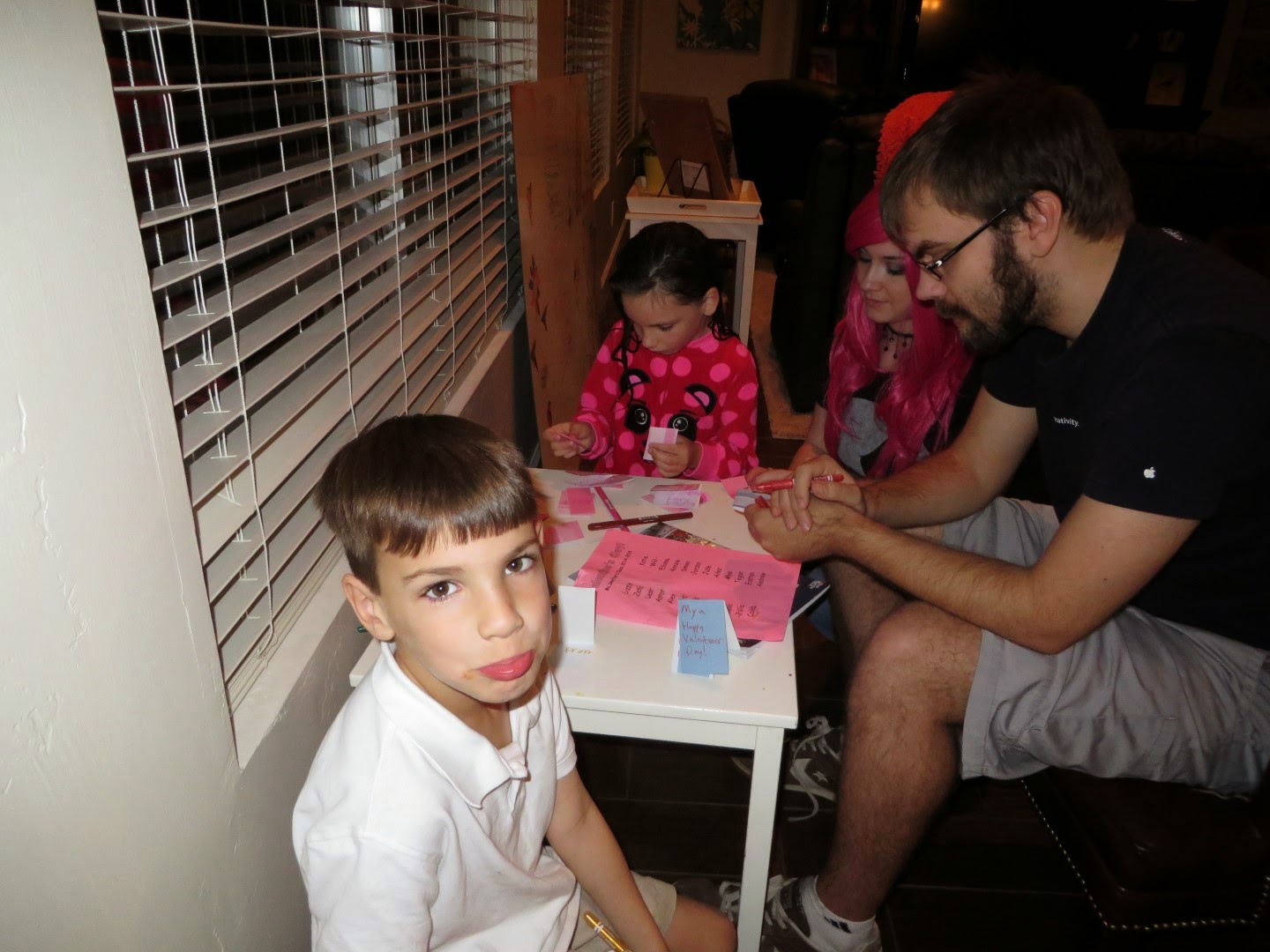 Angel food cake with fresh strawberries was a delicious way to sing happy birthday for the last time.  Easton ate it too fast and felt sick.  Kendra helped him gag and he puked it out.  I know that's gross, but I will always remember this as the angel food cake puke incident.  Easton learned his lesson about stuffing an enormous piece of cake down this throat too quickly.  I can tell he won't do that again! 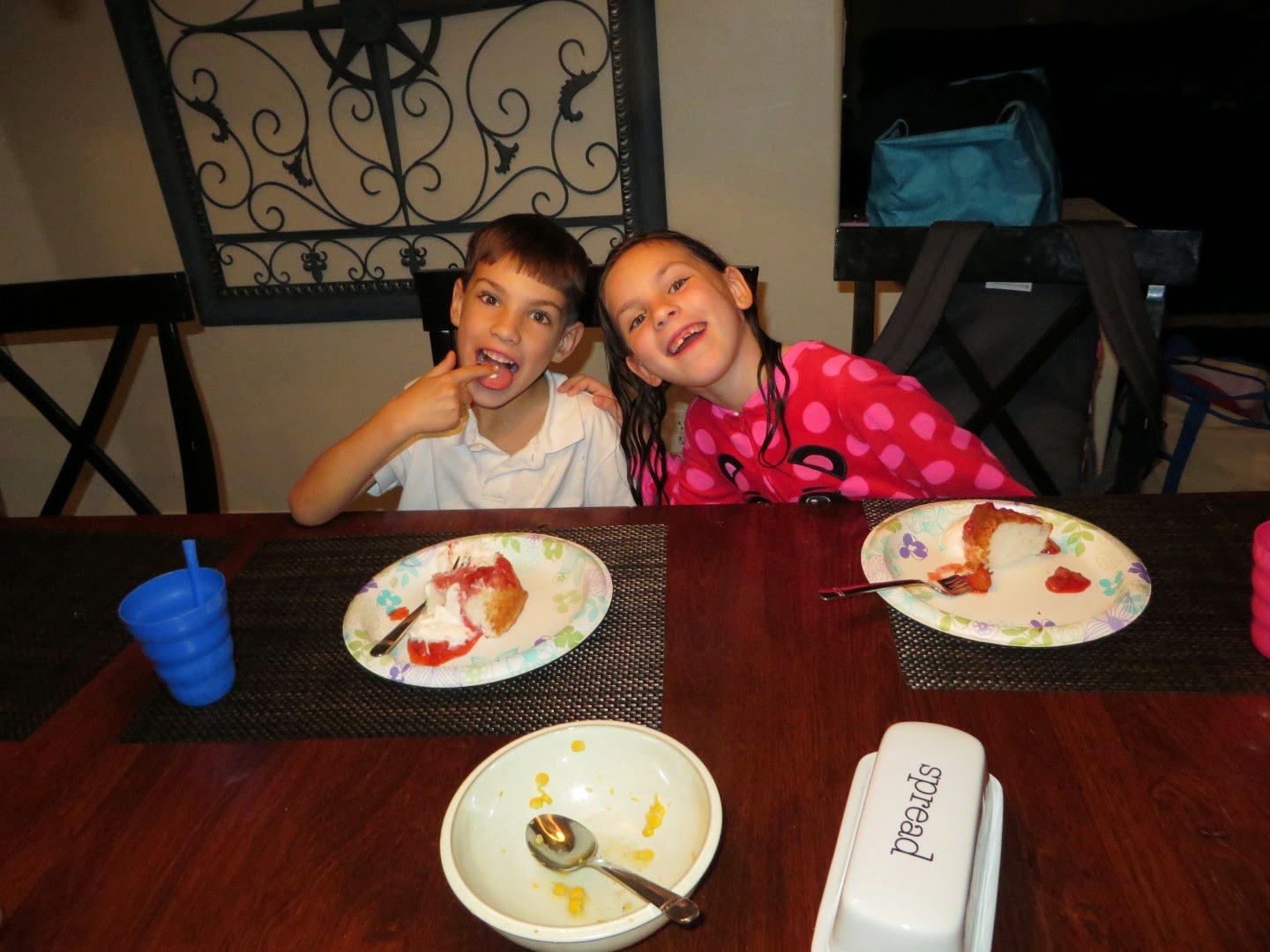 Logan and Bree gave good bedtime hugs good night for the twins as they headed off to bed.  Bree's pink hair matched Layla's pink polka dots really well!  This was the only family we had visit the twins this year for their birthday.  Kendra and I had hoped for out of towners to come visit, but we understand how the timing didn't work out.  The twins were not terribly disappointed because we had so many events, activities, meals, and Bree and Logan.  They were overwhelmed with love and attention this past week.  I consider it to be completely successful! 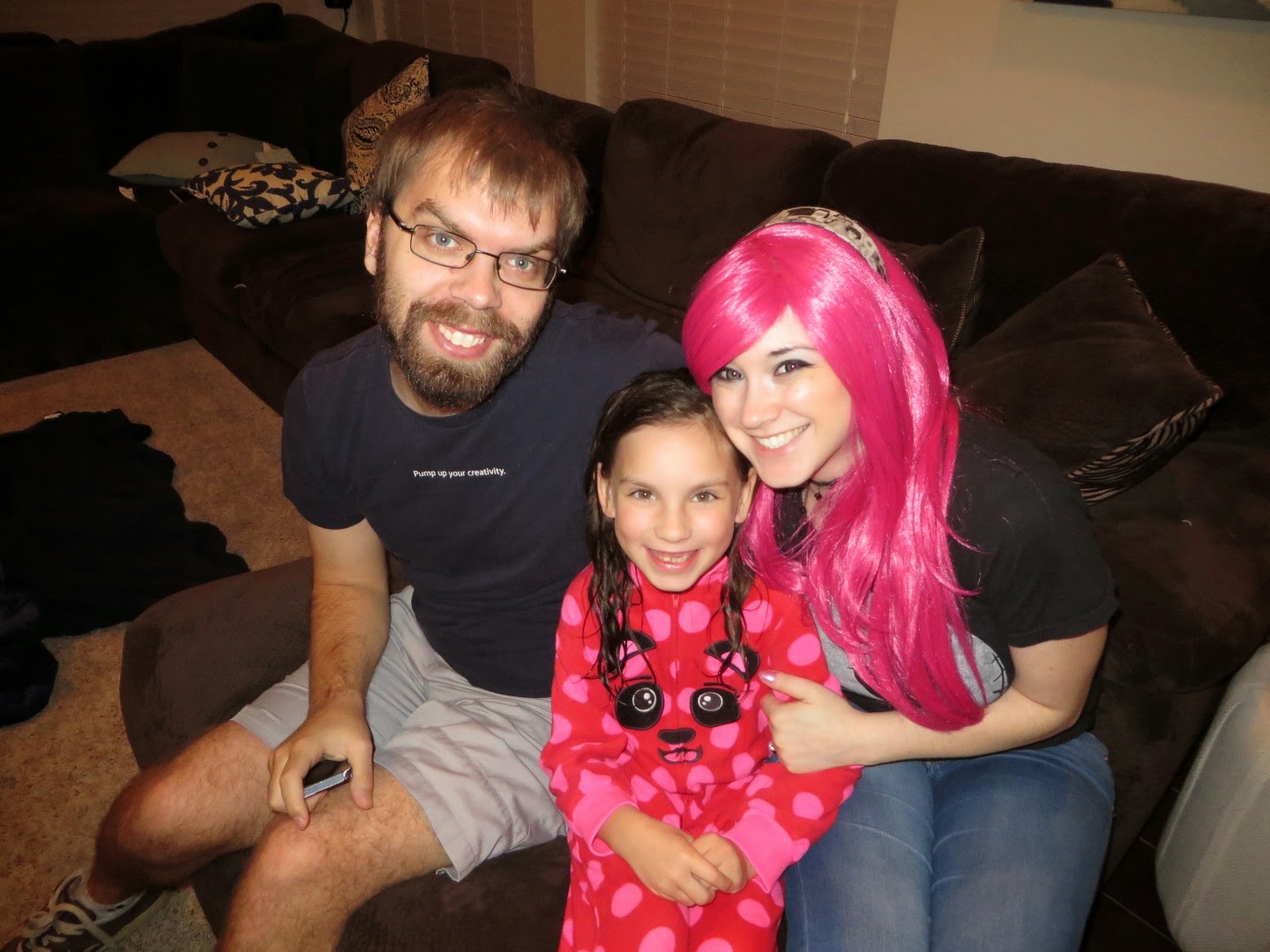 The twins have Monday off from school and I have it off from work!  Time to have some outdoor family time.  We have big plans of hiking, biking, picnicking, playing, shopping, and even some time to just sit around and do nothing.  Maybe even some chores if we plan well enough.