We've got a couple of runners on our hands here.  Easton and Layla participated in the fun run at school.  What I mean is they were forcefully coerced to run around their playground to extort money from the parents.  Cleaver scheme if I've ever heard one.  Get the parents to pledge $1 per lap and then have them run around a basketball court as a "lap".  Well played, school system... well played.

It was almost worth it for the twins to have their lap counter fully filled in to indicate they ran the race all the way to the finish!  I am proud of them for completing the race. 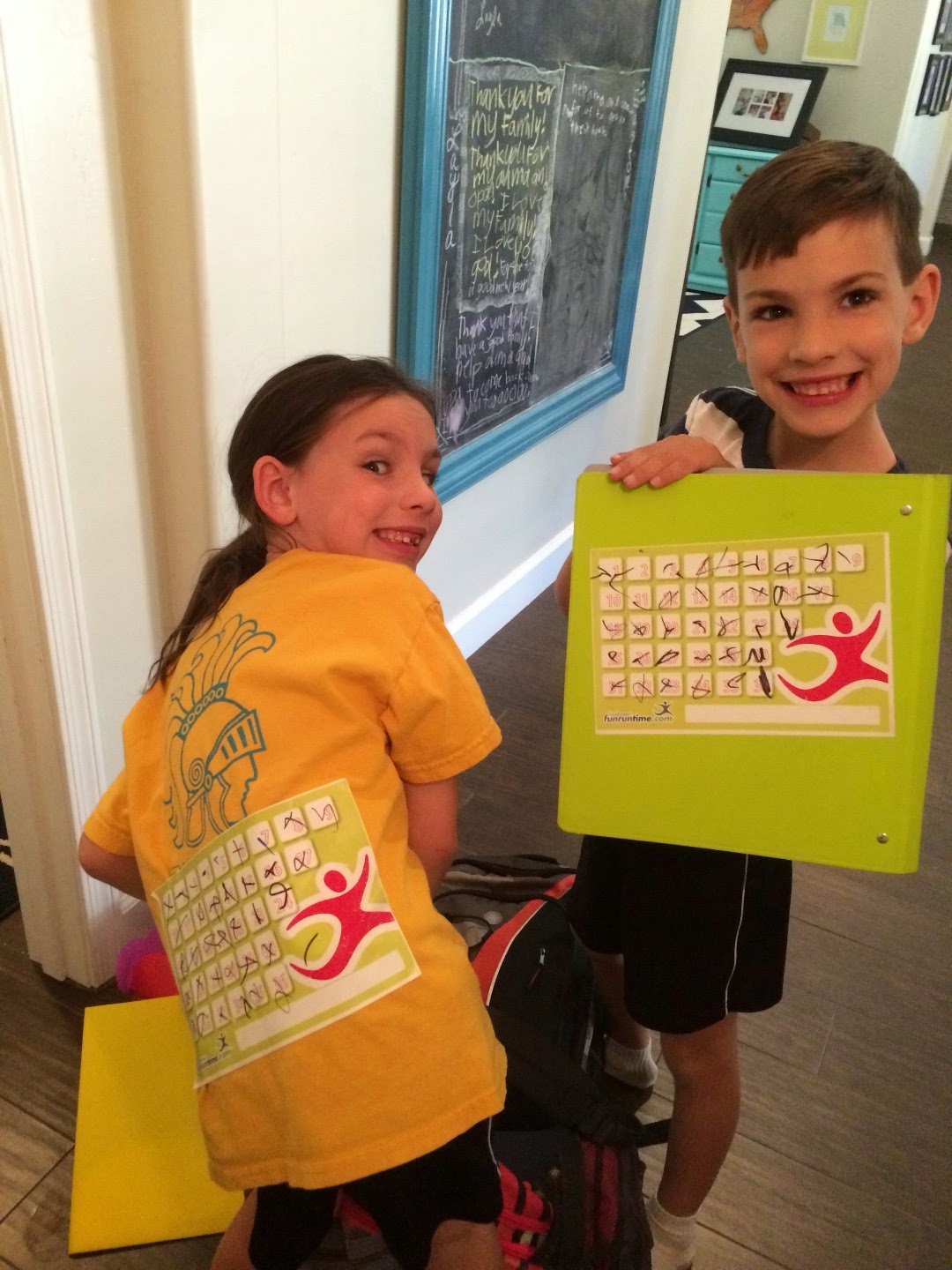 Every Friday Easton has the opportunity to choose any book in the entire school library to bring home for a week of reading.  He pulled out this book with a passion I haven't seen since he first read about the Titanic.  It's titled, "The Disaster of the Hindenburg". 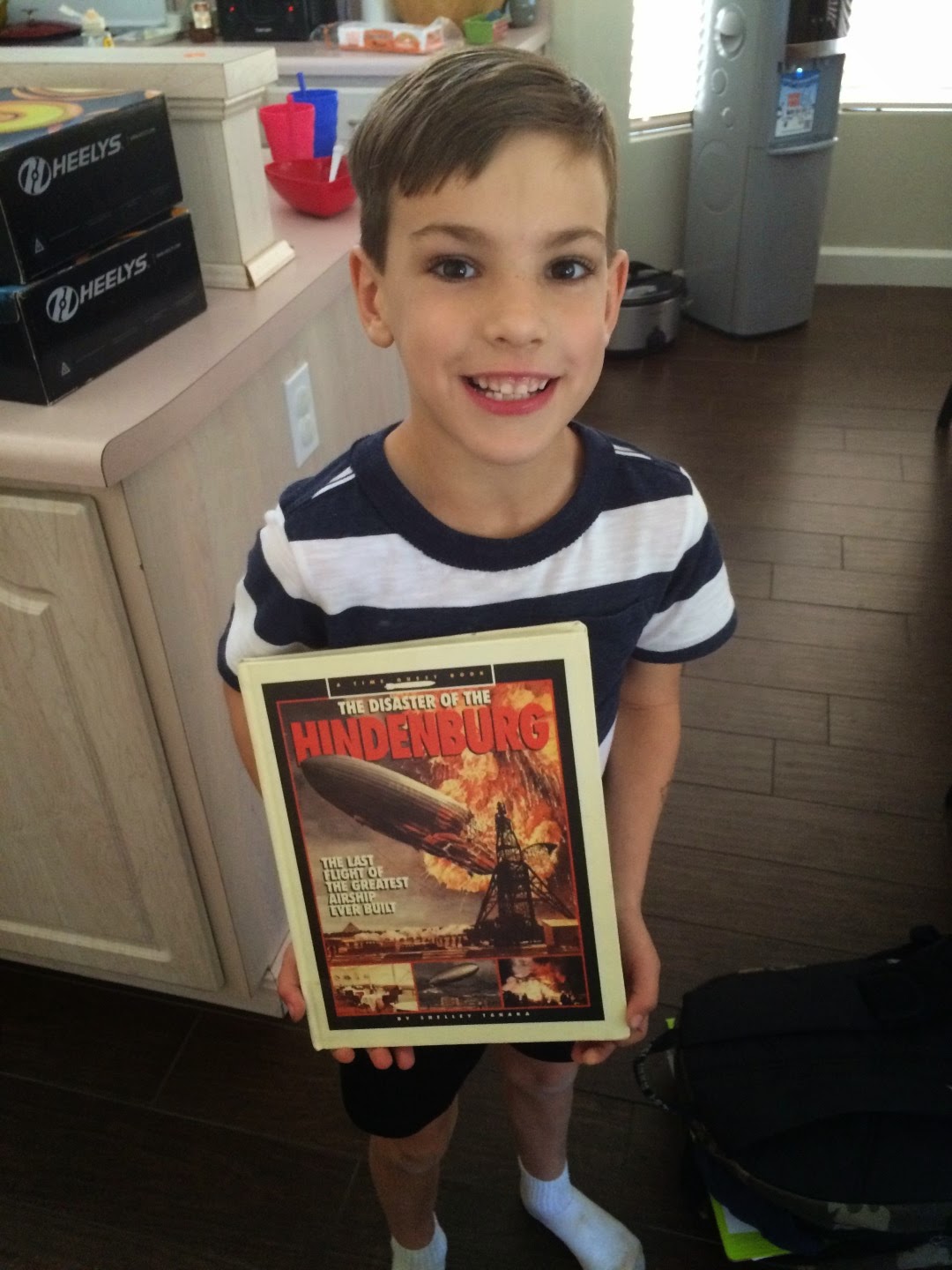 He started telling me all about how the airship went down in flames killing almost everyone on board.  I don't understand his interest in explosions and disasters, but that's not my role.  As a father I'm designed to help him find his passions and let him ride those waves as long and far as he likes.

Valentines Day was odd this year.  Kendra and I weren't in the holiday spirit so to speak.  We've had such busyness individually that we decided to make it a family day.  Most couples do the flowers, dinner, and movie, but we just wanted to be together as a family and rest.  There is nothing wrong with the standard Valentines routine, but I prefer to avoid the extremely crowded restaurants, high-priced flowers, and boring idea of sitting in the dark for two hours watching mindless nonsense.

It's just my opinion and last time I checked our government hasn't completely shredded the first amendment yet.   Anyway, there is nothing wrong with that Valentine's Day plan.  The question isn't about whether it is good or bad.  the question is: Does it bring life or is it simply following the written or unwritten rules of our culture.  There will be a time soon when I take Kendra out on a romantic date because I can't wait to be alone with her.  I will surprise her with flowers one day when I get the sense she could use a pick-me-up.  I will go to a chick-flick with her and be excited for whatever movie she is interested to see because I am interested in what she finds important.  Those are reasons to DO the things people do on Valentine's Day.  I just don't need a calendar day to tell me to do that.  I need a sensitivity to my wife to understand what she needs and wants.

OK, that's my soapbox for the day.    We rode our bikes to the breakfast place about two miles away. Each of us pedaling our own bike leisurely through the neighborhood.  Our time together over breakfast was extra special because nobody had to use the word "hurry!"  not even once. 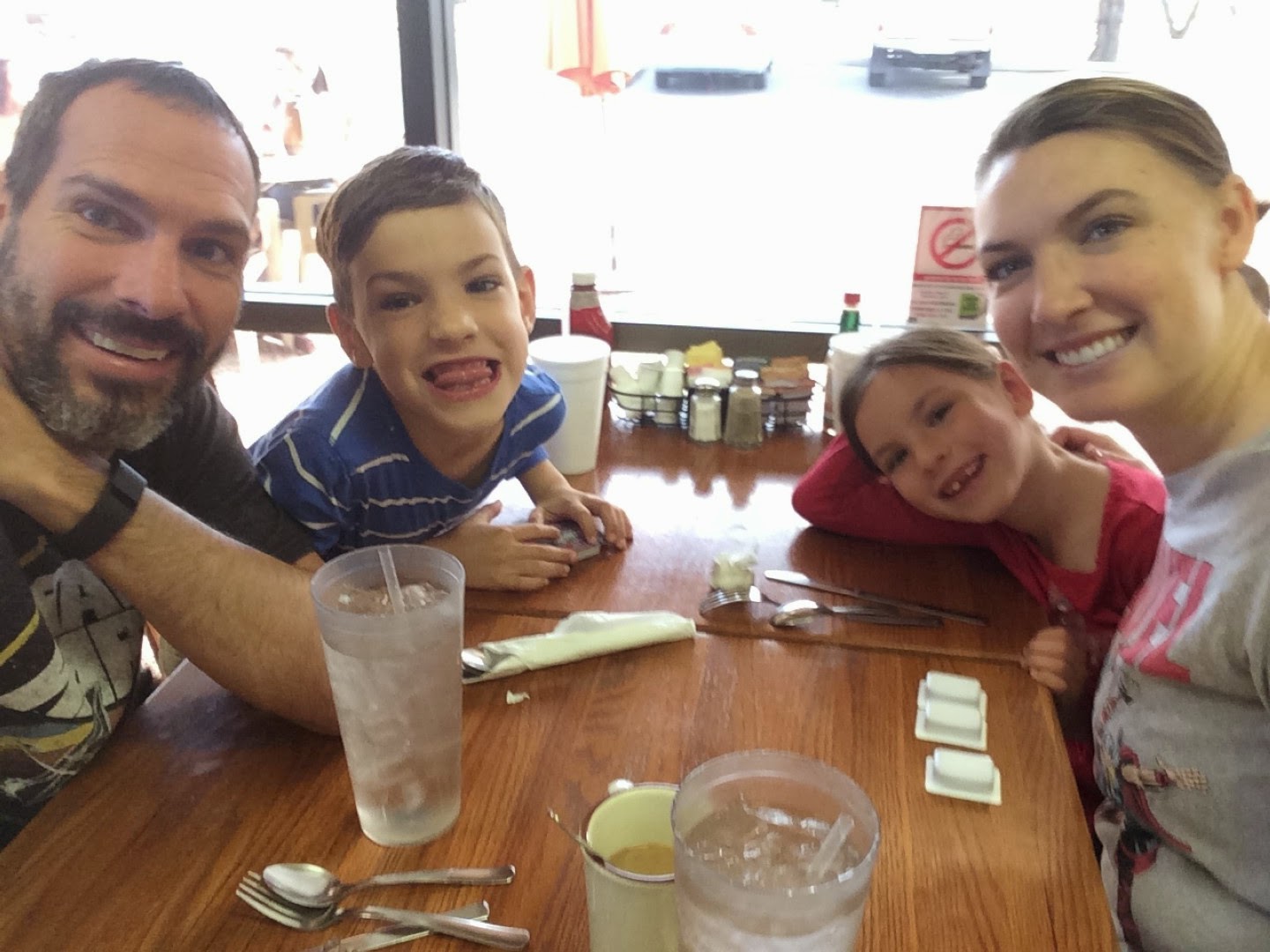 Then we went to Costco for some bulk groceries (everyone needs an 80 pack of soup, right?).  The twins wore their Heely shoes and rode all around the store hanging on the shopping cart.  When we strolled up to the checkout line, the checker guy asked if Easton and Layla wanted to scan the items.  Of course Layla jumped all over that opportunity. 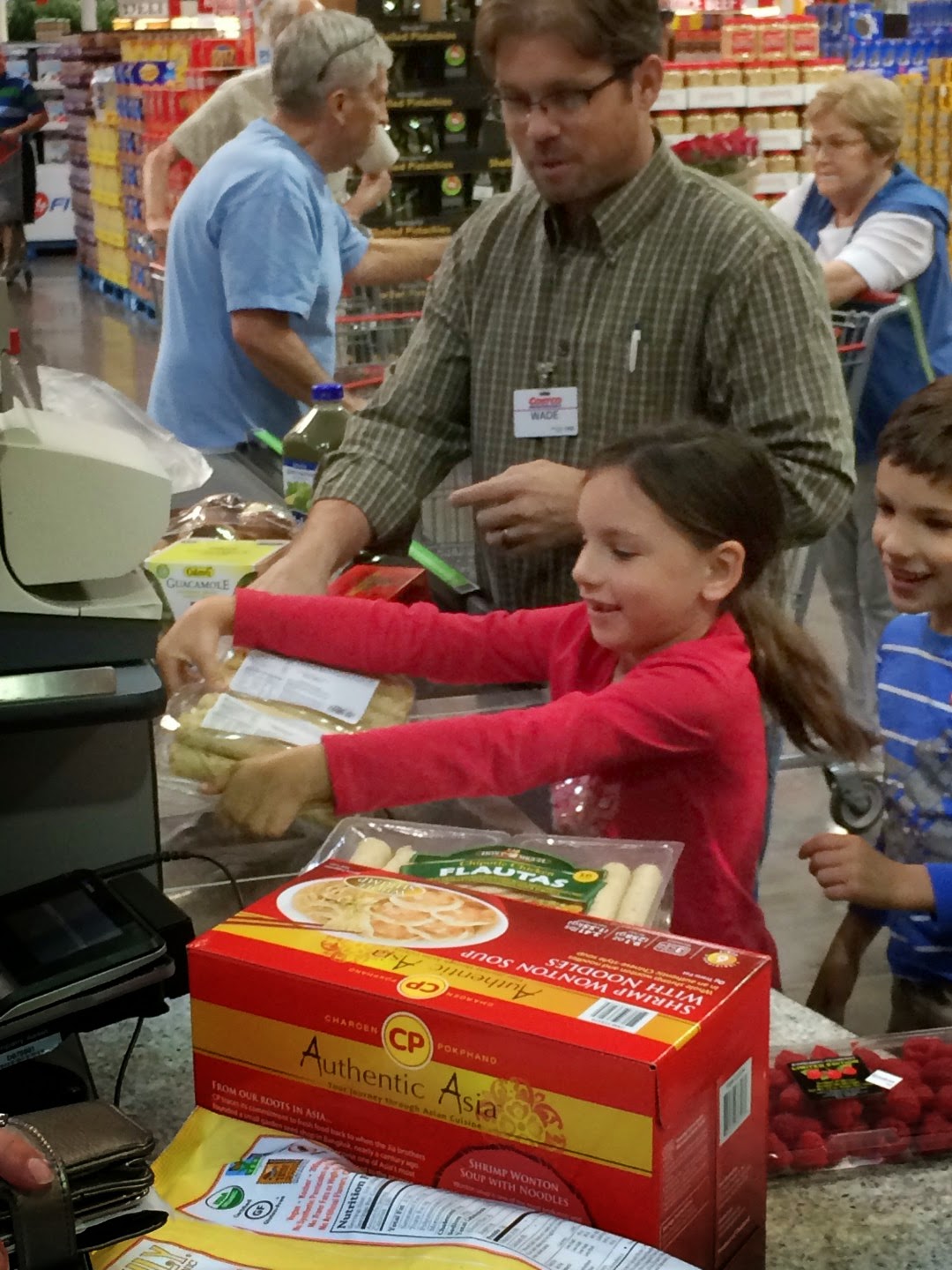 Easton took a turn also, but took much more time to scan because he was asking all these questions about how the scanner works and what the red laser lines do.  "Way to be inquisitive!" is how I responded to him.  Especially since none of us were in a hurry. 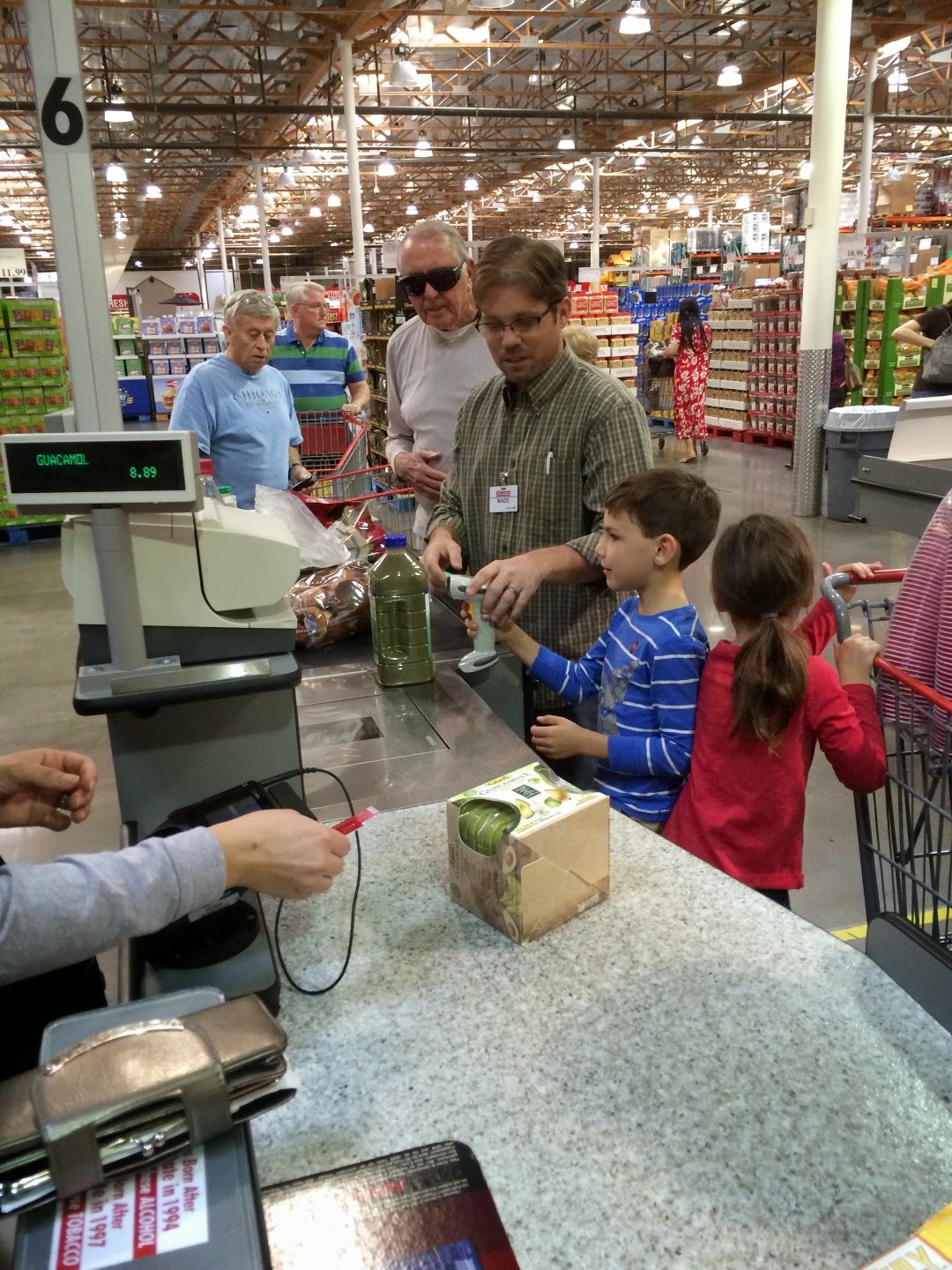 We also started our garden.  Well... kind of.  We have a separate value for the garden sprinkler system and we have a lovely area in the back corner of our yard where a garden could grow.  However, we have zero experience growing food so we asked our friends to help.  We brought over pots and learned from them how to plant.  The pots will stay at their house as we continue to learn through this season.  Then when the fall comes around we'll be ready to get our hands dirty in our own backyard.  Easton had a crash course in laying paver stones.  He learned the direction to lay them, how to make them level, and what order makes the pattern.  What a great helper he is becoming! 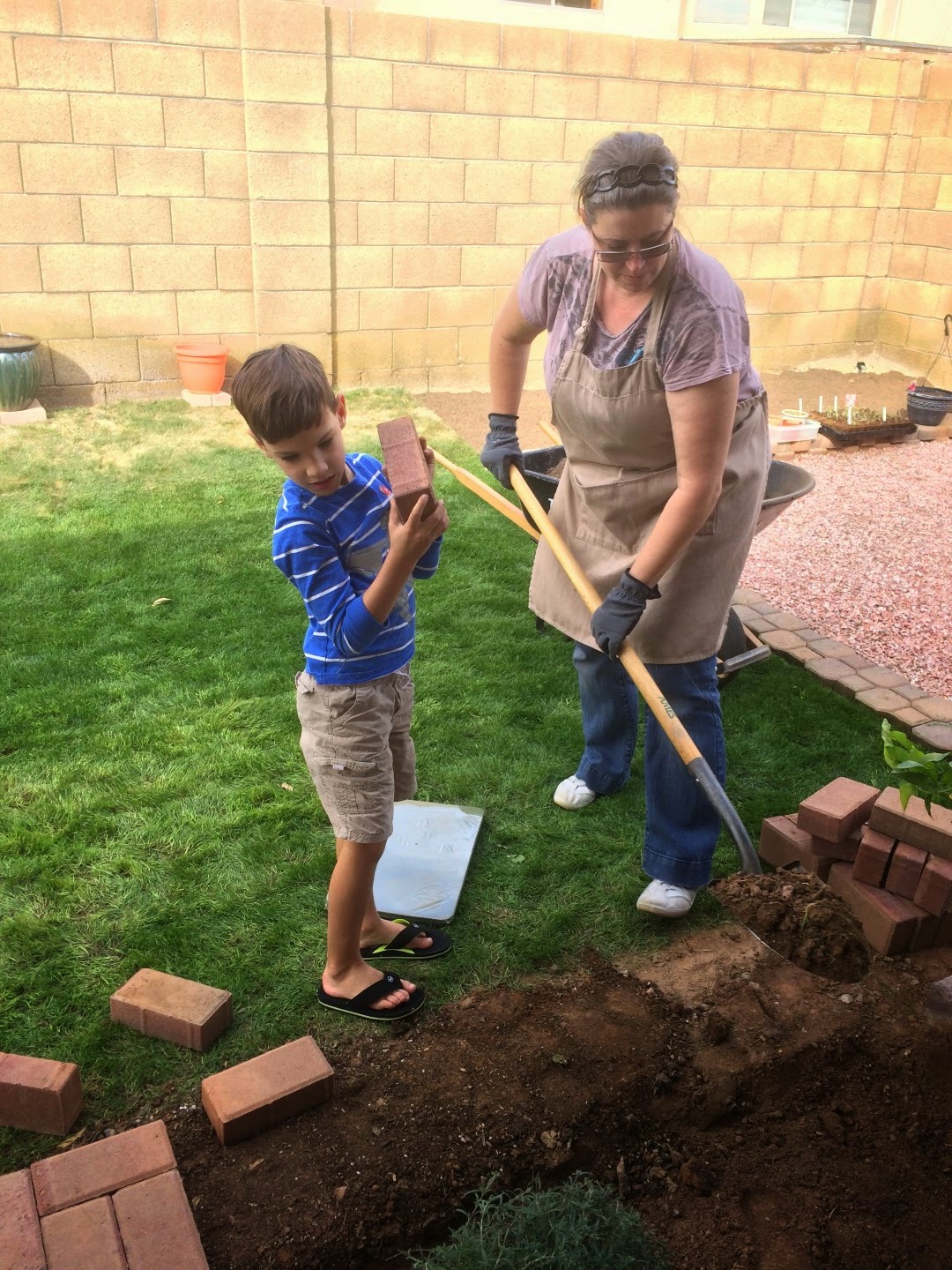 Layla also joined in the brick laying.  Her focus was on the texture and beauty of the bricks.  She just has a completely different focus than Easton, which is perfectly fine by me.  They both get the job done.  The way they do it is slightly different.  And besides, we weren't in a hurry! 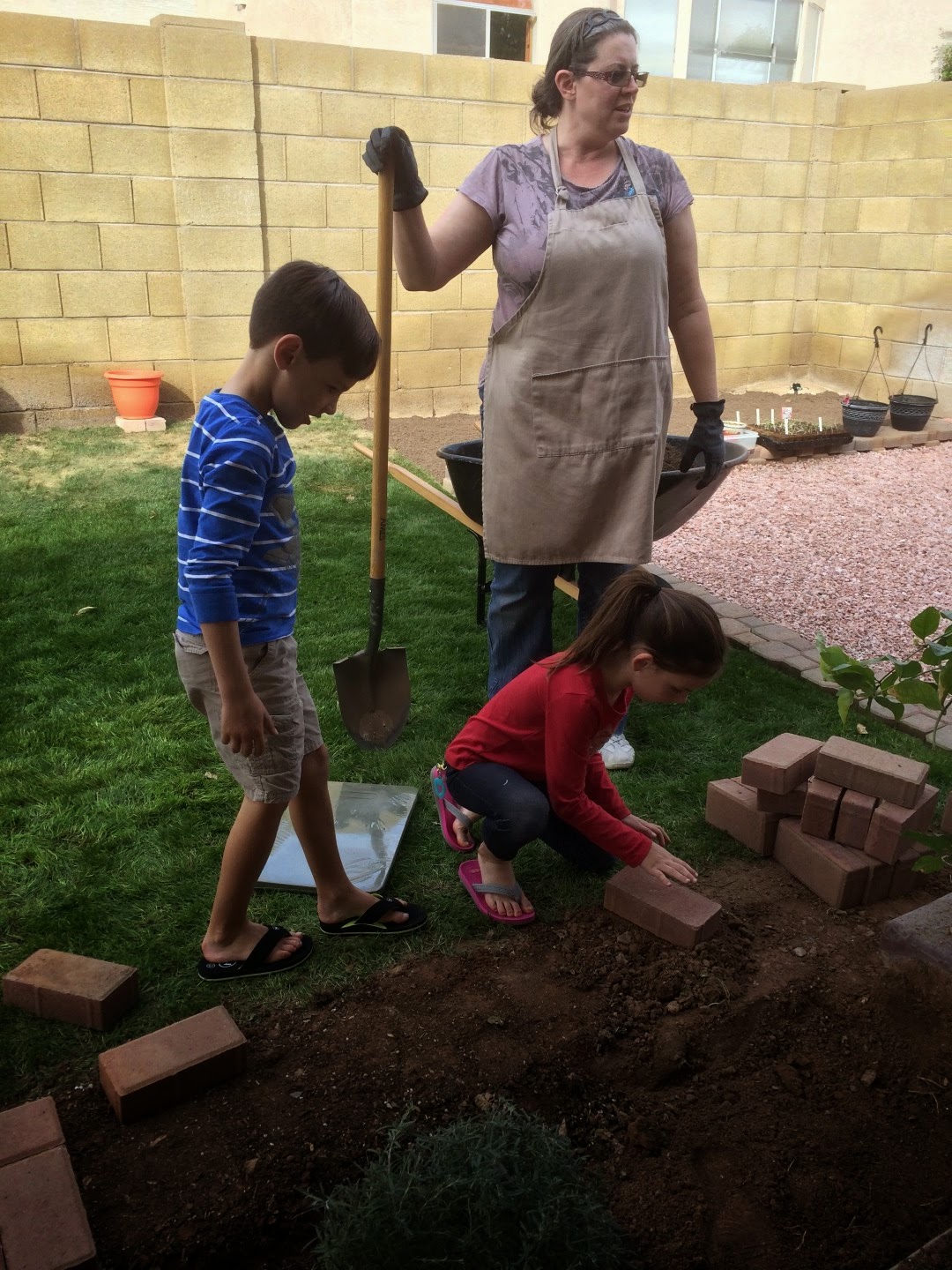 The twins took about three days to become proficient with the Heely shoes.  Layla learned by watching a two minute video.  The next thing I saw was Layla wheeling down the hallway.  Easton watched the video, but kept putting his feet out like water skiers.  Then he watched Layla, She taught him how, then he tried and fell several times, then after a couple of days he got the hang of it.  Here's a picture of both of them rolling along. 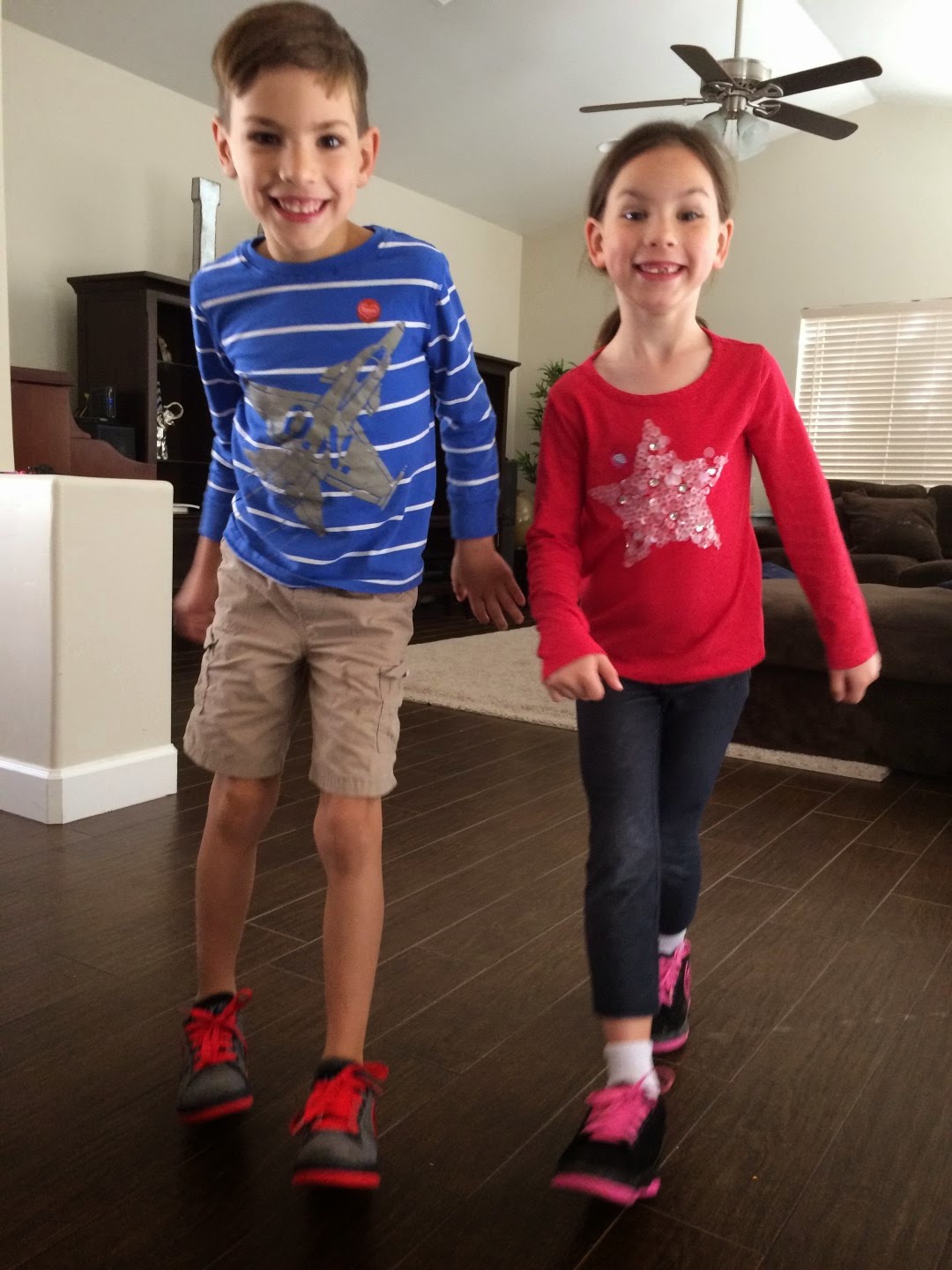 I know I posted a picture of the twins with their Heely present, but here's the video of their reactions.  Thanks to Nana and Papa for giving them the gift that keeps on giving.


The other thing we squeezed in on Valentine's day was a night ride for just Easton and I.  Layla and Kendra had a spa night with face washing, fingernail painting, and pampering.  Easton really wanted to hit the trail and experience the night life.  We arrived right at sunset to hear the sounds of a coyote pack off in the distance.  We kept our lights off for the first few yards of the trail to get adjusted to the night.  We rode four miles without a single cut or scratch.  Nothing behind us but the blackness of night over the desert.  The temperature was perfect and we both left with huge smiles.  That was a great Valentines Day.  Nobody said hurry even once, which is a rare day for the Webb household. 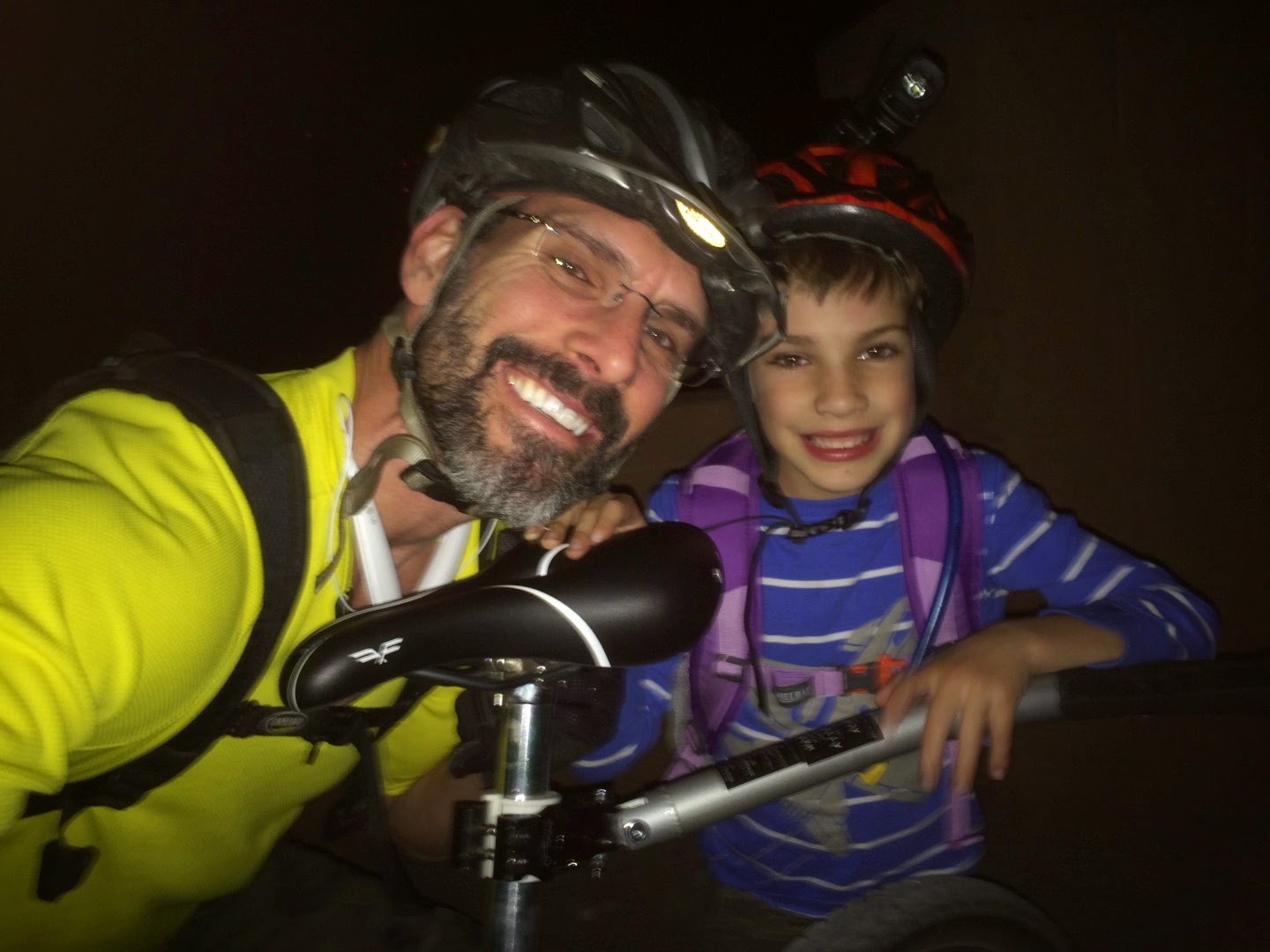 Sunday was a typical Sunday for us in this season of life and ministry.  I showed up at church by 8:30 am, took a short break in the afternoon to prepare for class that night, and then we arrived home after 9:00pm at night.  Such a long day, but completely worth the effort because we get an up-close view of what life-change looks like.  The class is going extremely well and Kendra is doing a great job of leading as usual.

Monday morning arrived and we took full advantage of the three-day-weekend.  Layla woke up late, but still managed to beat Easton out of bed. That's happened about 5 times in their entire lives.  We slummed around the house in our pajamas way too long, but nobody cared.  When we got our stuff together I took the twins to the Arizona Science Center.  The first thing we did was the planetarium because they had a new show about "extreme planets".  Easton was amazed and happy.  Layla was worried we were going to literally be sucked into a black hole.

The rest of the trip was great for both of them.  This spinning pole mounted to a metal plate was the highlight for Layla.  She pulled her ice skating moves to rotate super fast until she became so dizzy she had to stop. 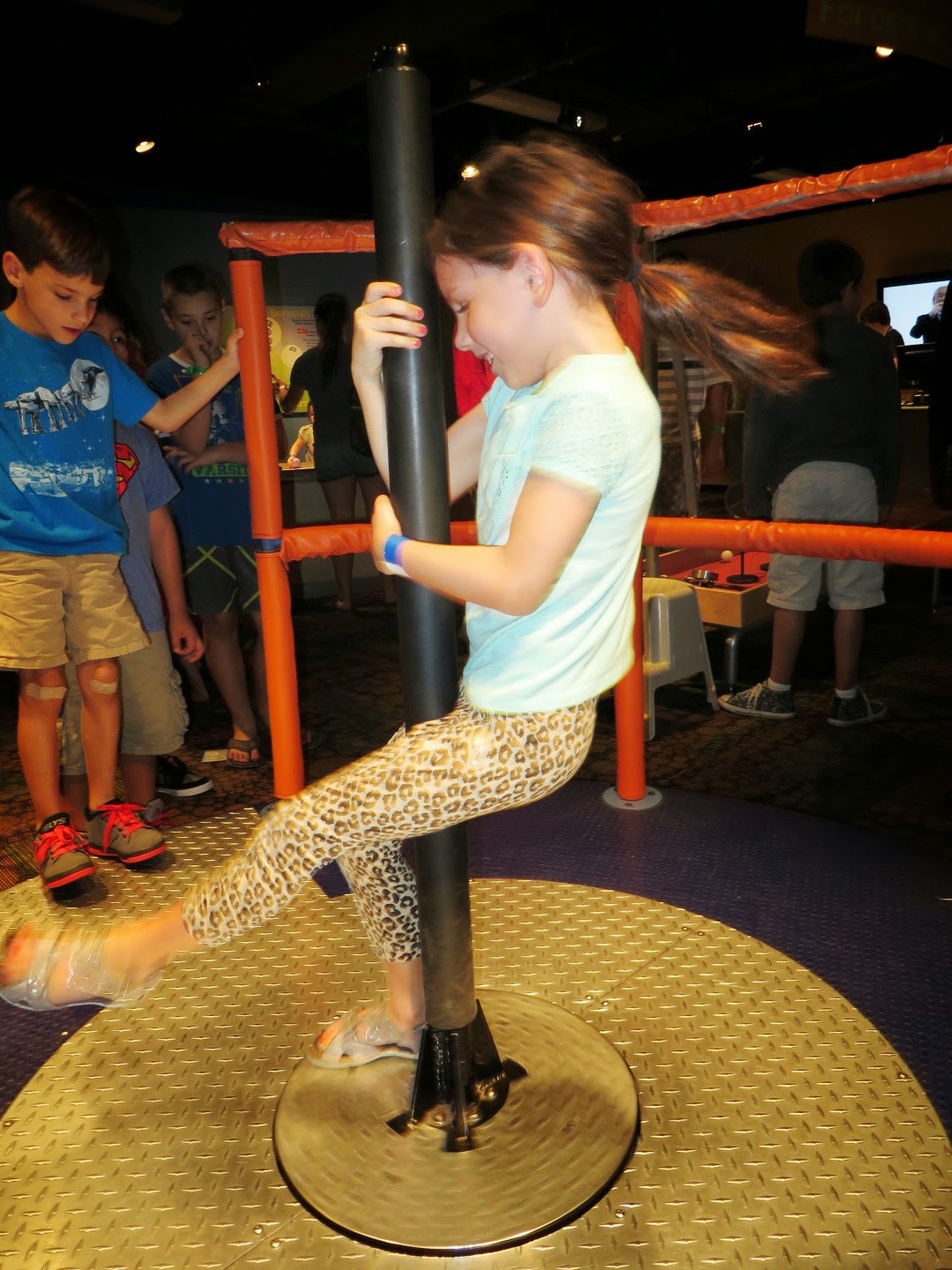 Easton was a little clumsy, but did a fine job of spinning around.  He considers this G-force practice for astronaut training. 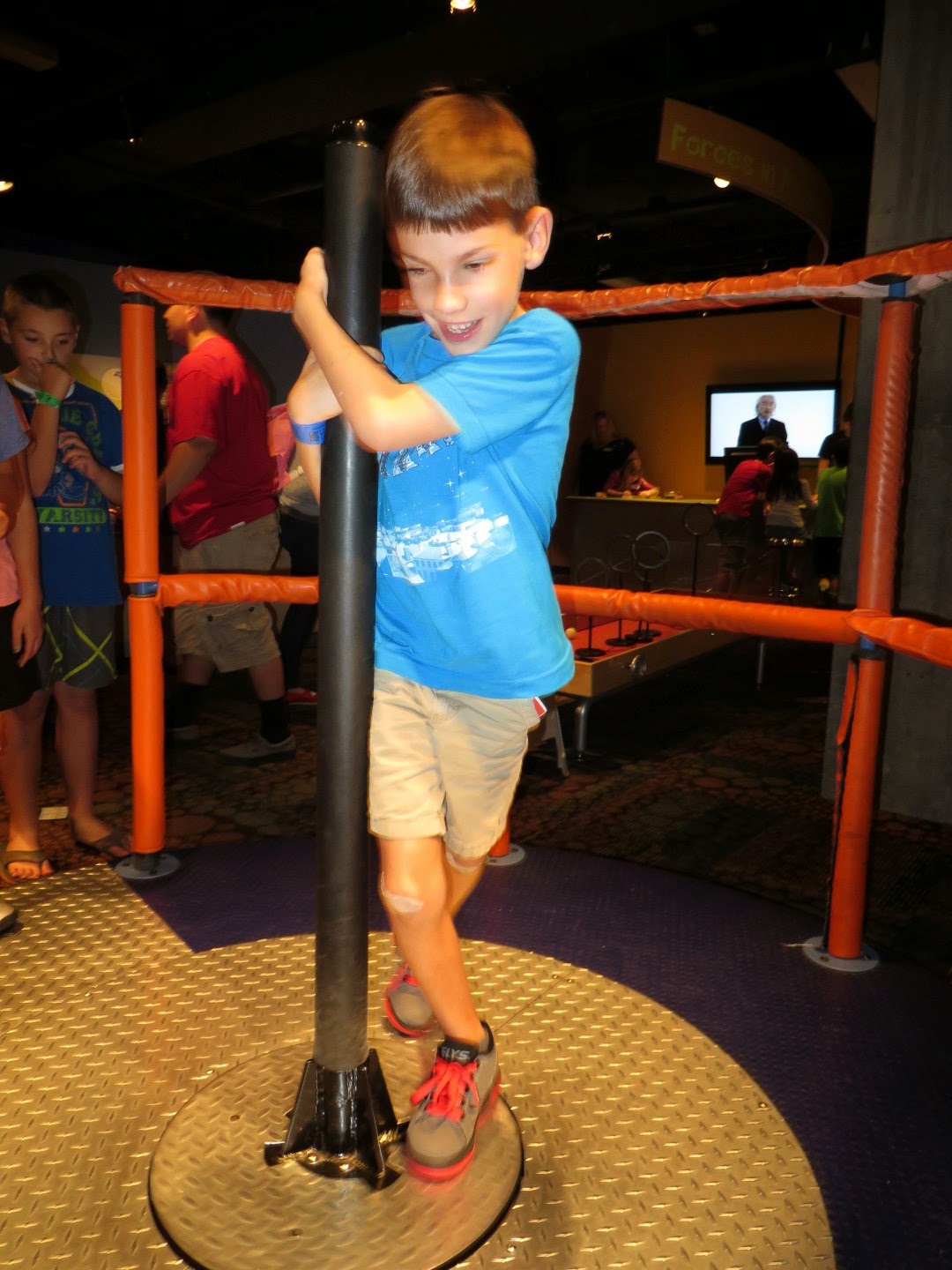 The three of us had a fun Daddy day together with minimal cost thanks to the Groupon membership. 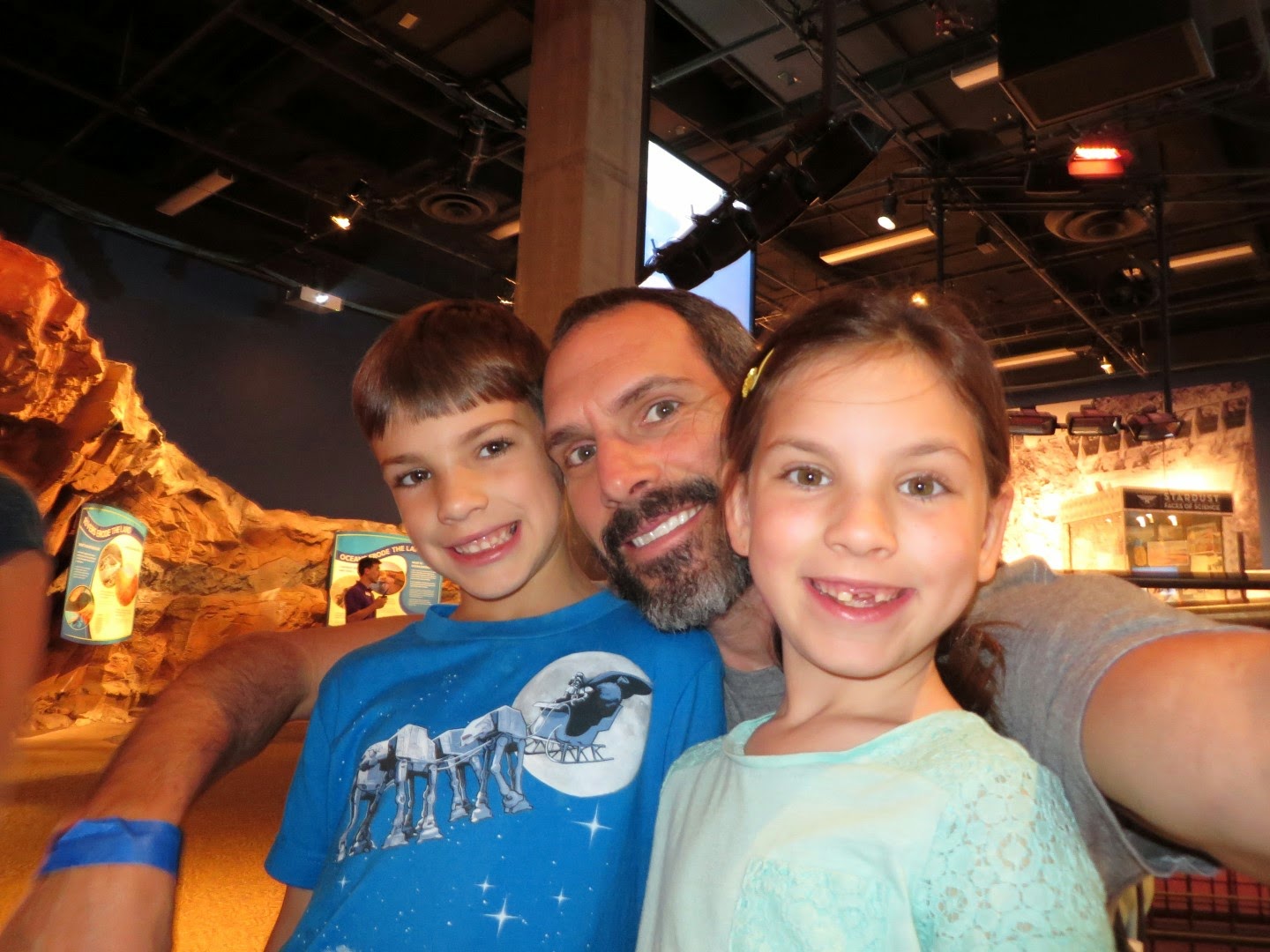 It's amazing how quickly three-day weekends go no matter how productive or lazy I am.  It was definitely a great use of our days off.  Time to get back to the normal work-life balance starting tomorrow with many occasions to use the word, "hurry!"