Javelina and the Moon

There are very few pictures of Kendra and I together that make it to the blog.  For one, somebody has to take the pictures and secondly, Kendra and I have to be together.  Those two things don't coincide often enough. Part of my goals for the next 3 months is to experience more of these moments. 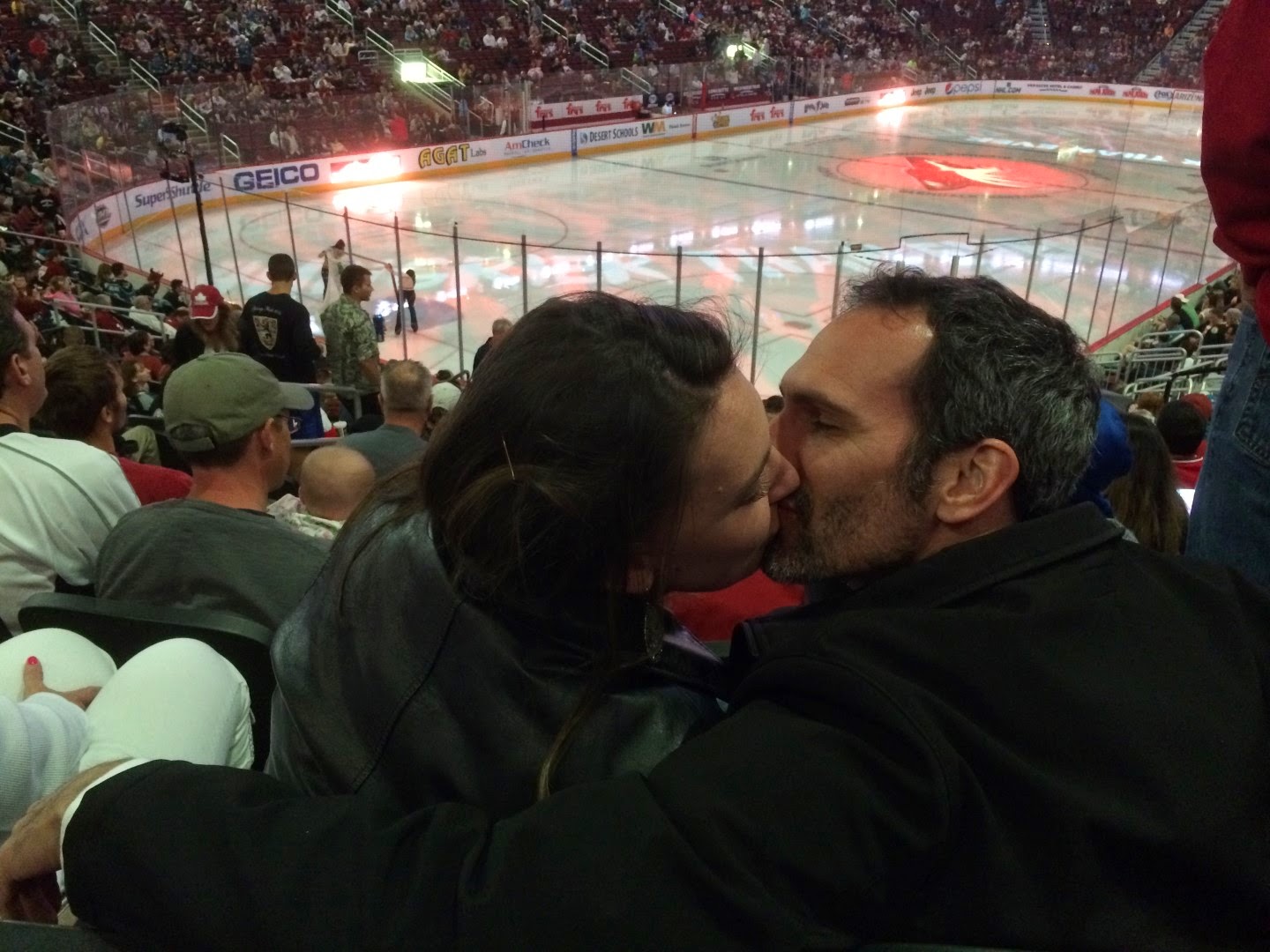 My work place has give-aways and I won tickets to go see the AZ coyote's play some hockey.  Two tickets for $175?  yeah, they really are that expensive and I would never pay that amount of money to go watch hockey.  however, I will take free tickets and pay for gas and parking and a babysitter.  We even extended our time together by having dinner out before the game.  Sitting across the table from her and then right next to her at the game was a breath of fresh air for me.  It was also a breath of cold air inside the arena. 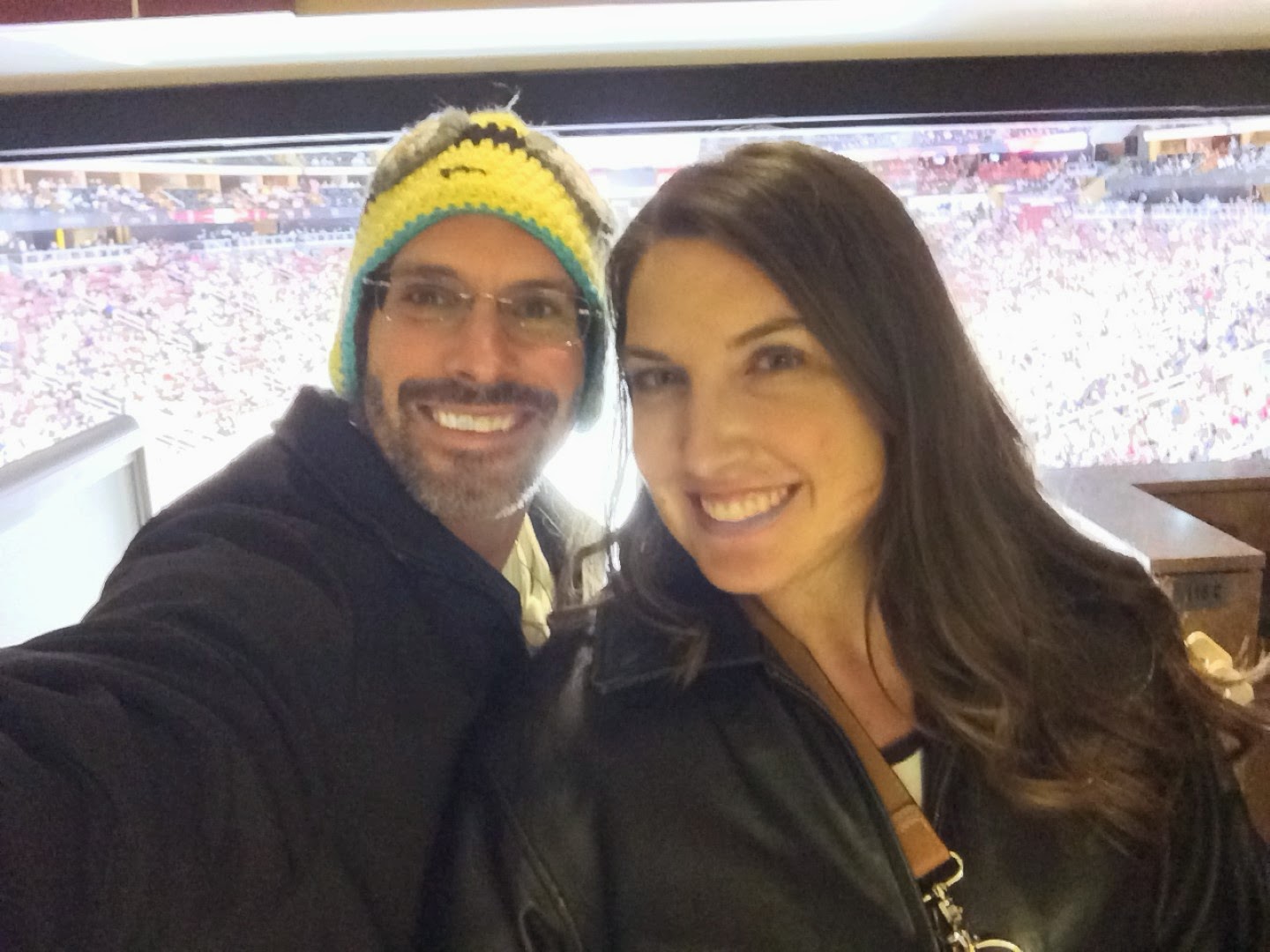 If you can't trust your wife with a 40 caliber Glock, then you married the wrong woman.  At least, that's the way I look at it.  Kendra has always been cautious about guns because she hasn't been around them much.  However, after she completed the Concealed Carry Weapon class, she is much more open to the idea.  We are planning a night out with Jacob at the shooting range so that Kendra can dump some rounds.  He thought it would be best to have gun lesson 101 at our house instead of trying to explain everything with earmuffs and loud guns blazing at the shooting range.  I was happy to have his expertise and explanation to get Kendra even more comfortable with handling a firearm. 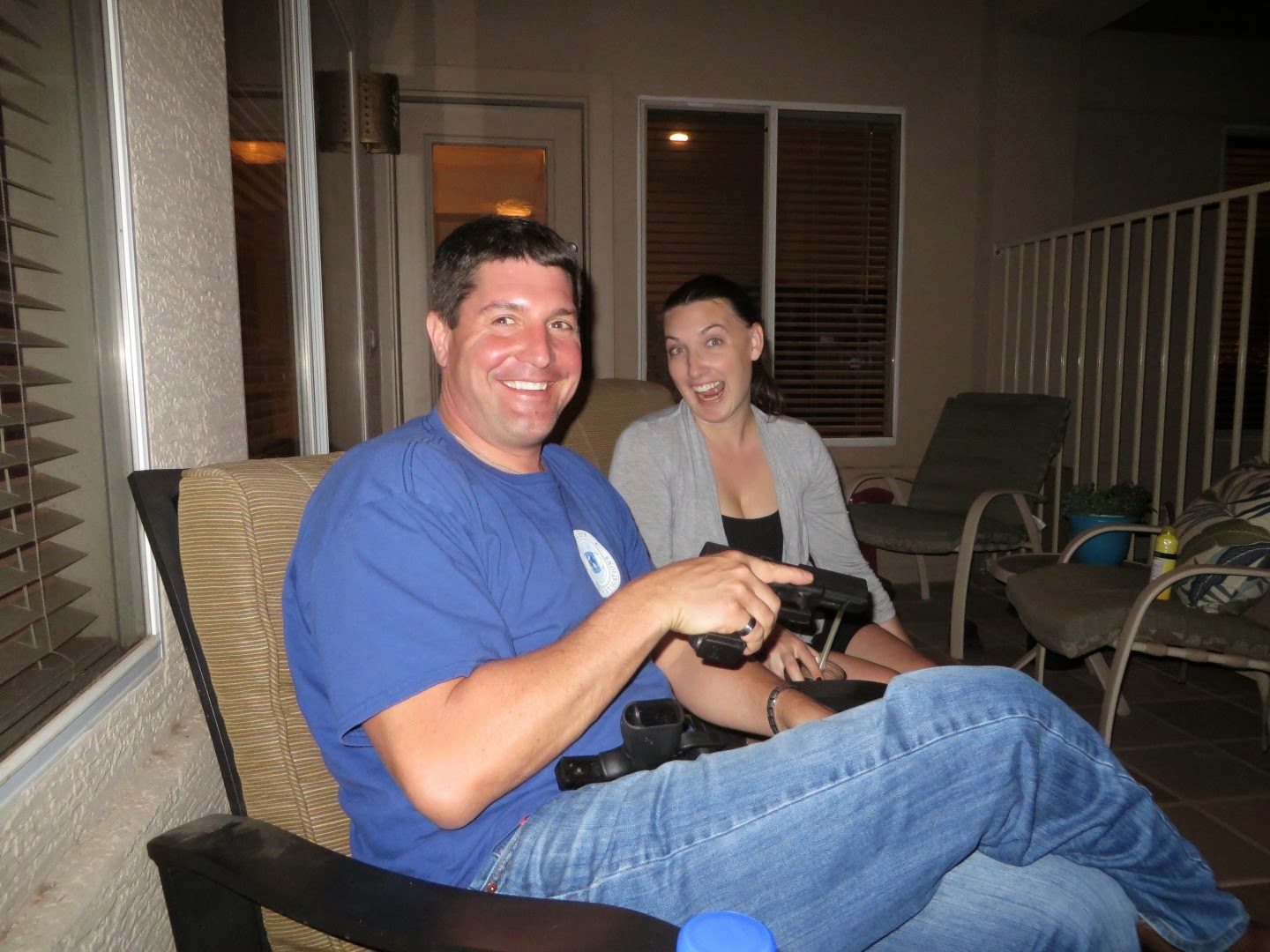 That same night was a cosmic hat-trick.  I've been keeping tabs on what celestial events to bring Easton into.  This was a biggie.  1.  the full moon  2.  Mars was closer than it has been since before Easton was born  3.  lunar eclipse with blood red moon, which hasn't happened in my lifetime.

My friend Scott was kind enough to let us borrow his telescope.  I set it up before sunset so that we wouldn't have to work through that hassle in the dark.  I wanted to keep it a secret from the twins so they wouldn't get all fired up before bedtime, but their inquisitive minds were no match for my clunky secret skills. 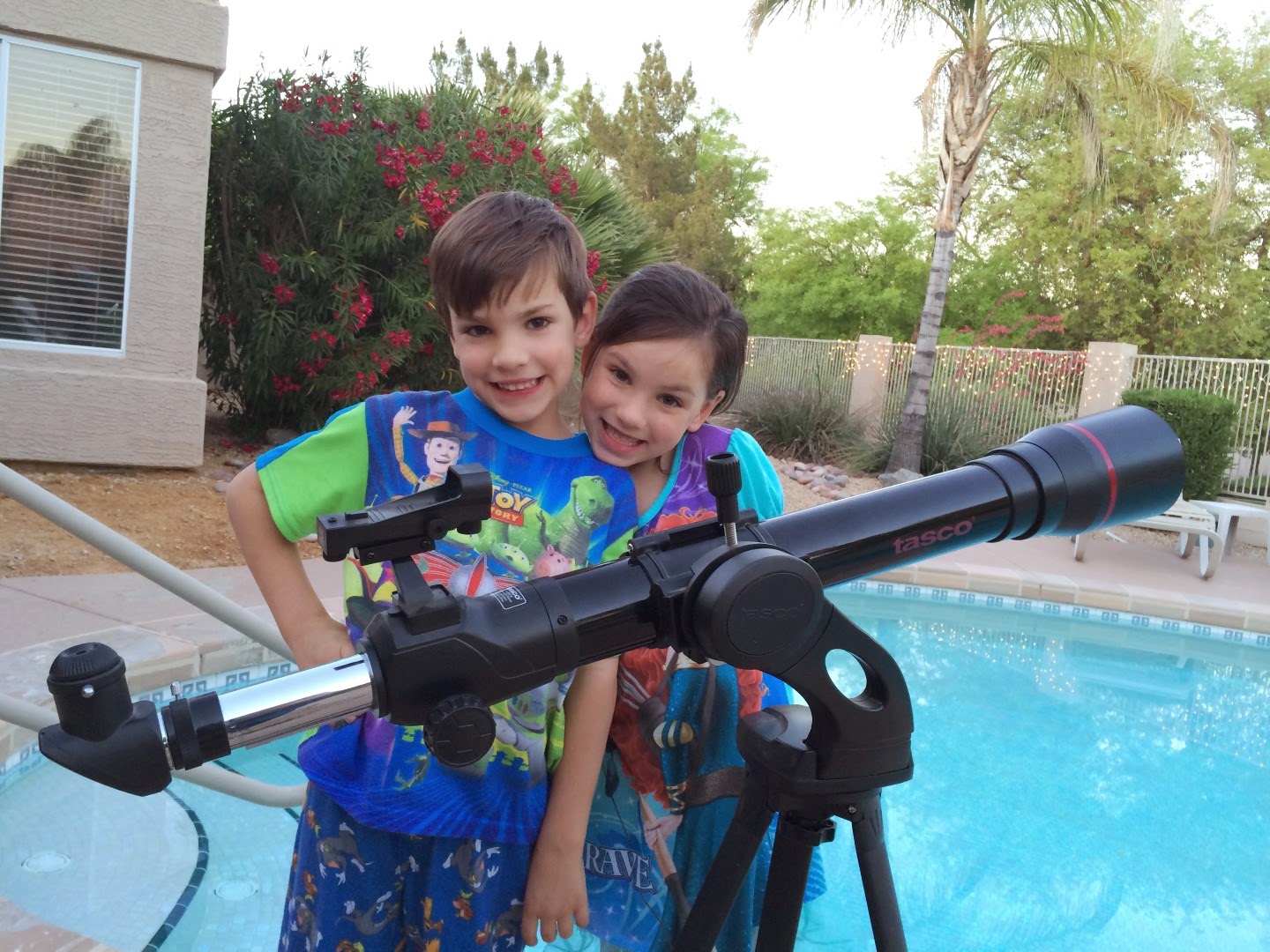 Easton is usually asleep within minutes, if not seconds, of his head hitting the pillow.  Not so much this night.  He didn't sleep a wink.  He kept coming to the back door to see watch us talking on the patio.  Finally I gave in and invited him out to see the sight of a lifetime.  Before we started star-gazing he went in to wake up Layla, but she was not interested in the slightest bit to wake up and join us. 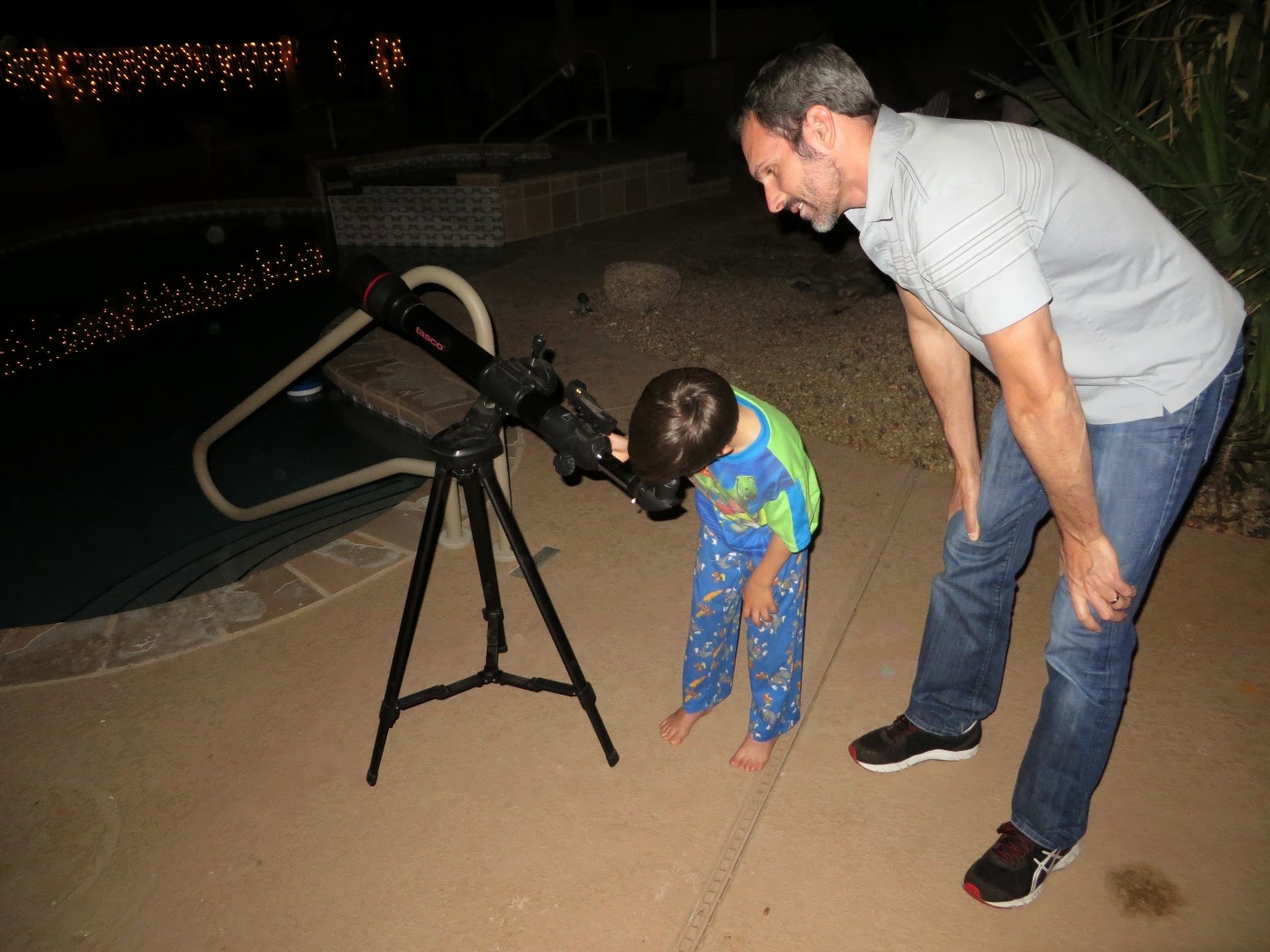 We saw the moon in all it's white glory and then zoomed in on Mars.  Instead of a tiny dot as seen with the naked eye, it was a big dot in the telescope that kept moving out of view.  Easton was super excited to have seen such a sight.  I sent him to bed and he quickly went to sleep.  Then I went back in around midnight and woke him up to see the red moon.  it looked like this: 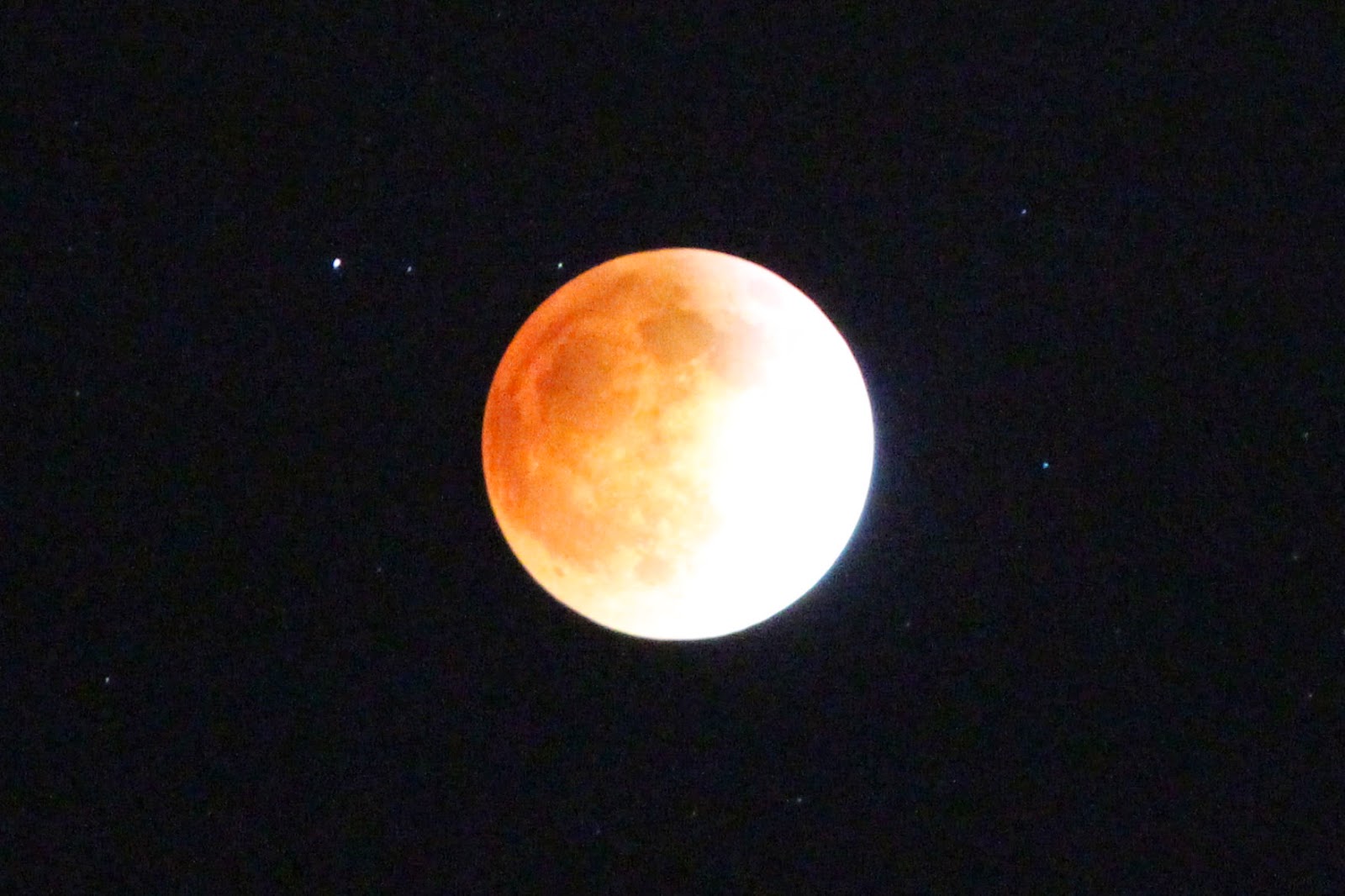 He was only awake about 5 minutes and then I sent him right back to bed.  He is convinced he didn't actually see it, but  I promise he did and loved it.

One evening we had our friends and their pre-teen kids over.  I needed to go back to our geocache to get the coordinates corrected so I took Easton and Layla and TT and Ben.  We headed down the trail and up the mountain.  something trotted out a bush a few yards away.  We stopped in our tracks and watched as four female Javelina walked by.  I've only seen a couple in 10 years of hiking and riding on South Mountain, but this day we saw four females in a pack. 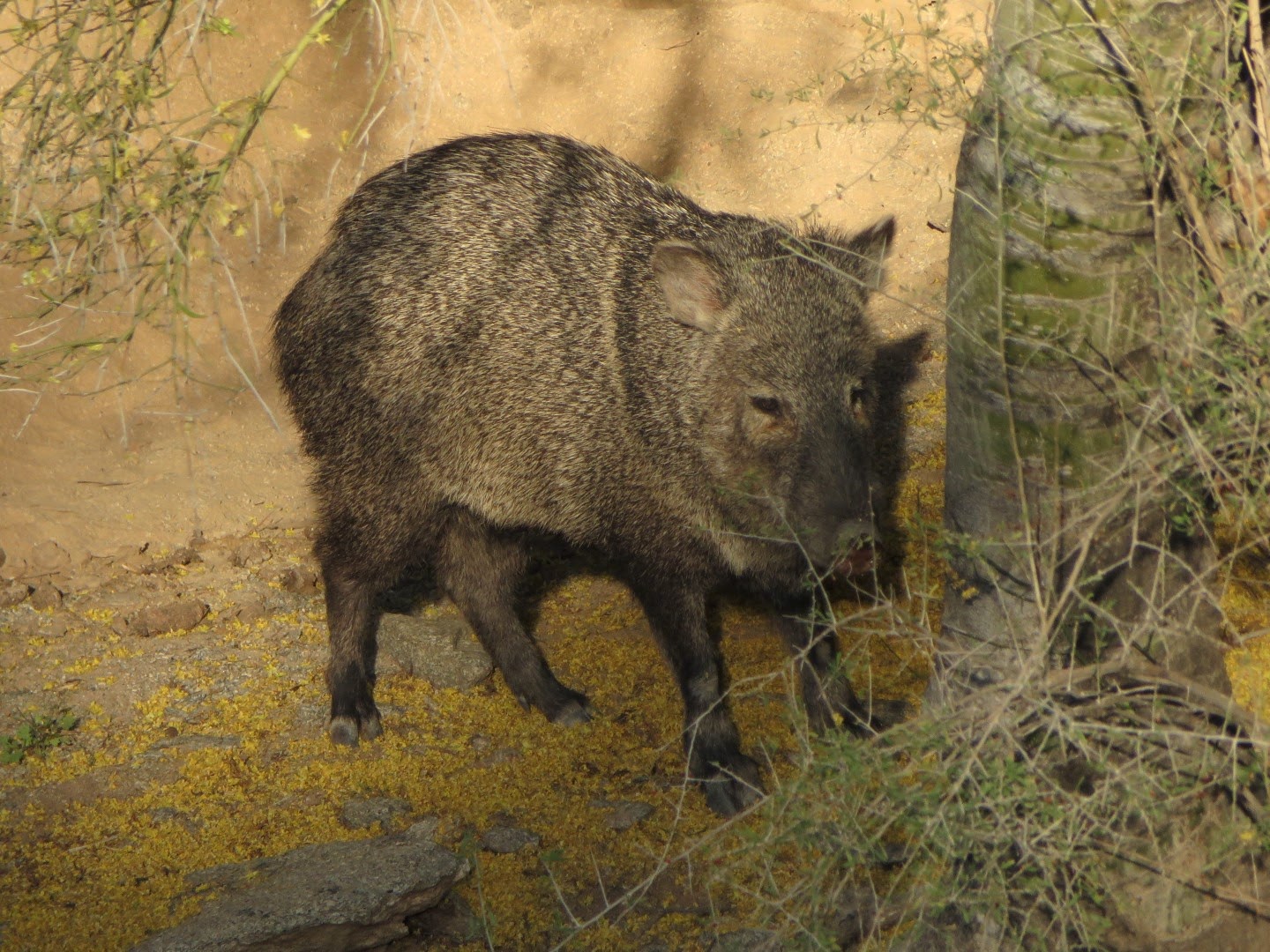 Then, as we climbed higher after validating the coordinates of the geocache we spotted two male Javelina with tusks.  again we watched carefully and quietly as the wandered away from us.  The adventuring on the mountain was the highlight of my week as far as time with the twins is concerned.  we had a great time together and adding in the other two kids was a real bonus because they are good with kids.  You can see Ben her pointing out some thing in the trail as we headed back down from the mountain. 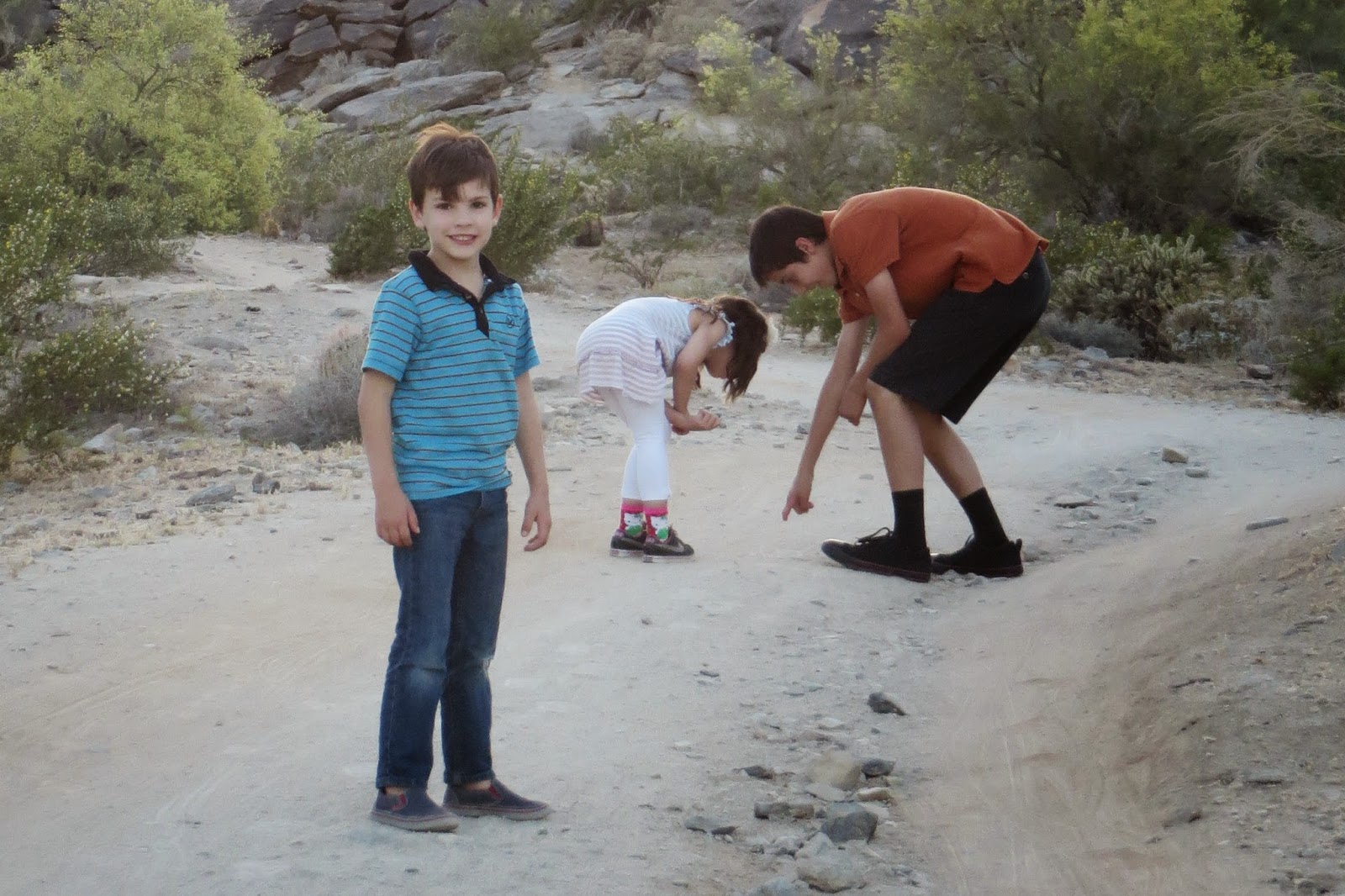 The downside of the geocache experiment is that I found out park rangers are disallowing geocaches inside the park.  arrrrrg!  So now we head back to the drawing board to find a new home for our container.  So much to learn and many more adventures to be had!

I loved the telescope story! Easton is sure learning lots from your tutoring and example. I am fixing Easter dinner tonight for B.J. and crew. Dad is smoking 2 hams for two diff. families. Joan and John and family are camping this weekend. Such a different Easter for us. I hope you have a Happy Easter tomorrow. Love ya gobs. MOM