Our past few days have been very birthday focused.  Nothing wrong with that, it was just a weird coincidence and aligning of the planets so to speak.  First, let me share the exciting leap into the realm of participators in the geocaching world.  Here are the geocache roles that also apply to every other area of life:

Spectators - those who say, "wow, that's a cool idea.  glad you like the outdoor recreational activity of finding little treasures."

Participating takers - those who go geocaching, sign the log book, take something from the container, but add nothing to the cache.

Participating givers - those who go geocaching, sign the log book, take something from the container, and then add something back to the cache.

Leaders - those who create geocaches and give their time and resources.

Welcome the newest leaders:  Easton and Layla.  Beneath their hands is a gap in the boulders where we hid our geocache under a big rock. 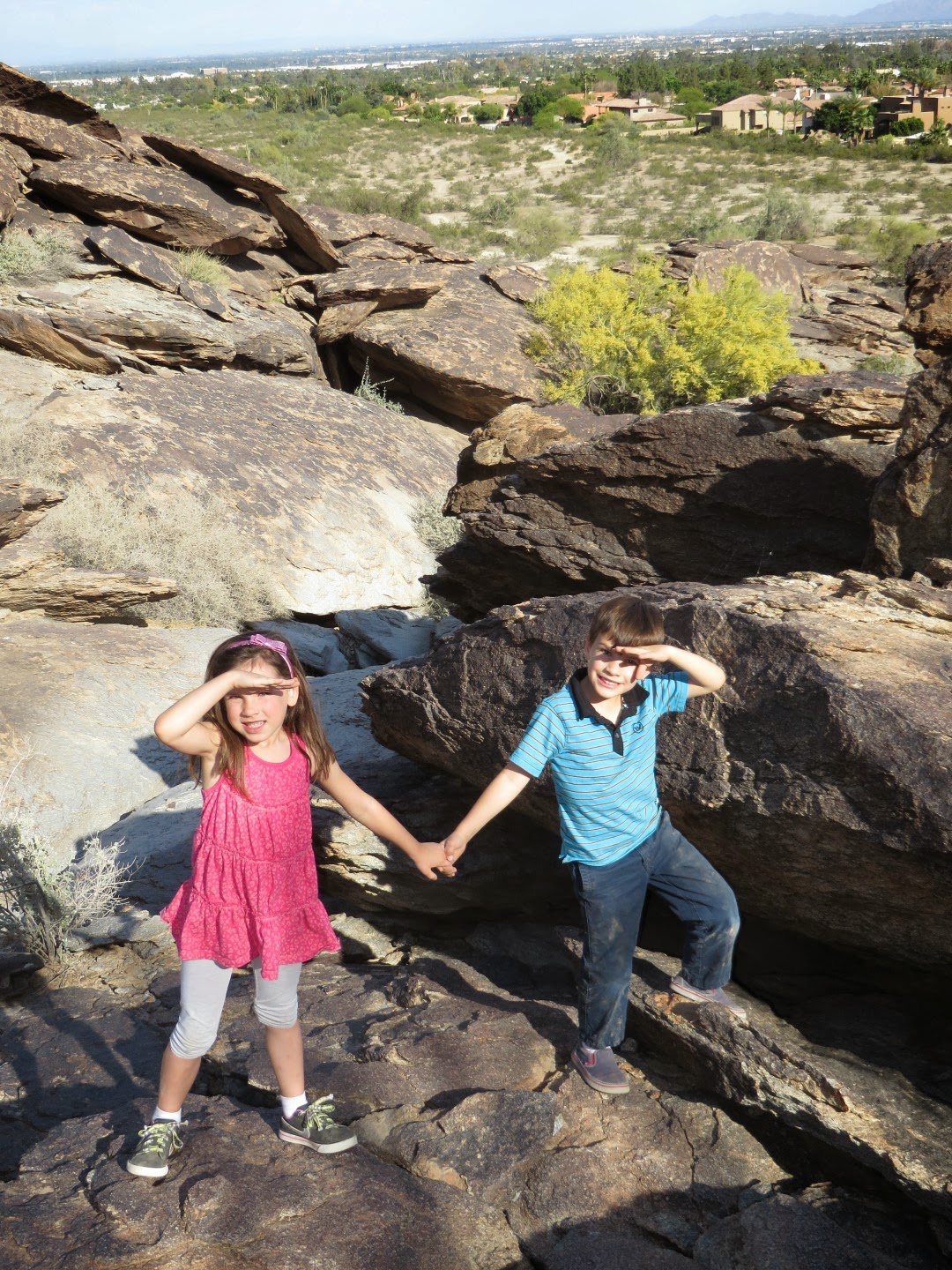 I emptied a plastic cylinder container from the garage to get it started.  We filled it with all kinds of princess figurines, lego men, a golf ball, a fake gold nugget, bracelet, thumb drive, and several other items I can't remember.  Part of the fun was filling the container with items that fit and would be possibly a treasure for someone else.  The twins named the cache "The Lion Cave" because a few fee from our hidden treasure is the small cave.  Easton and Layla are pointing to the entrance to the cave to show where it is in relation to our hiding spot. 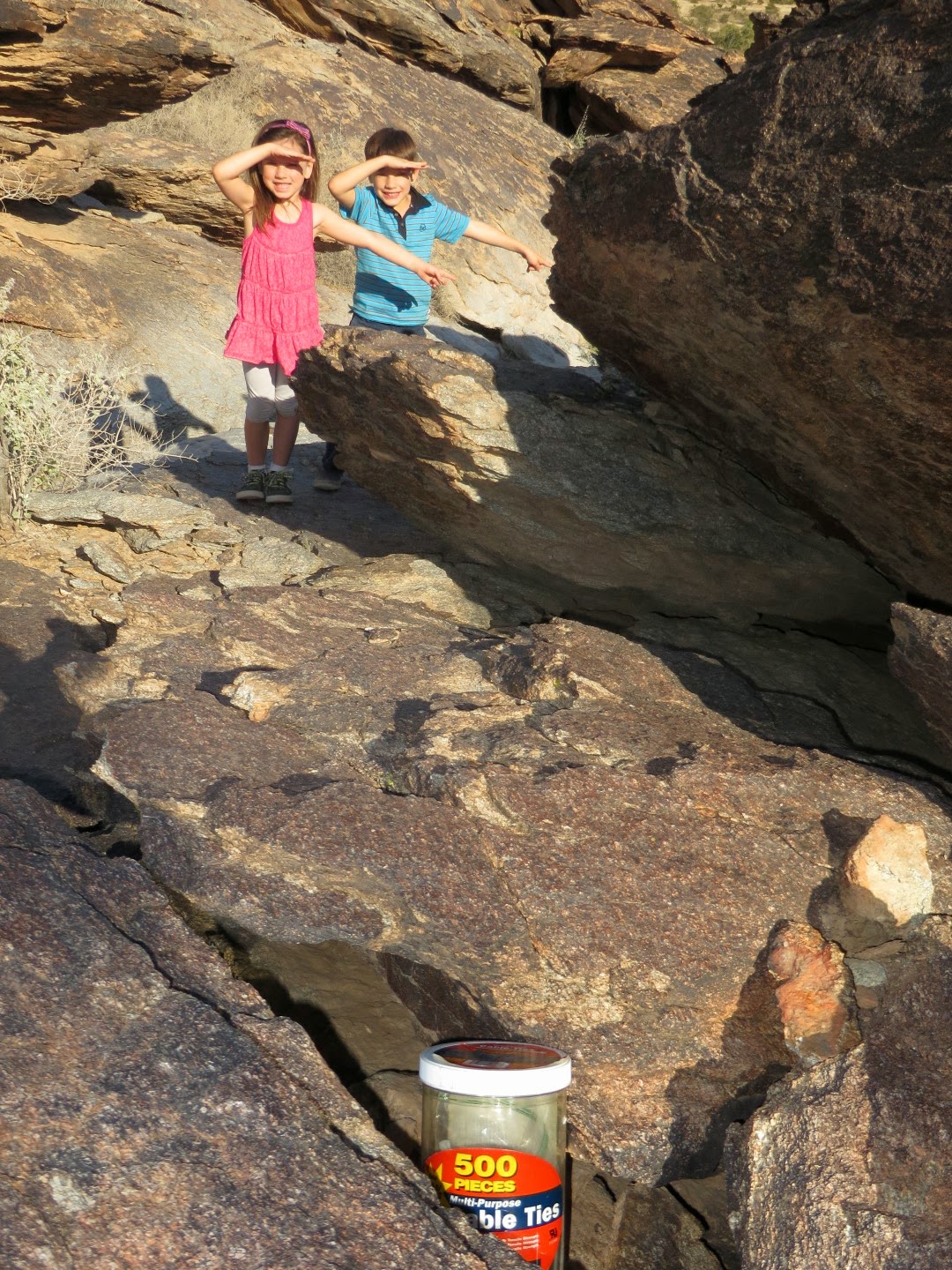 The cave is just a 15 ft by 15 ft gap in the massive boulders that piled on top of each other a million years ago.Next we will load the GPS coordinates and directions onto the website.  After we finished our geocache creation effort, Easton pointed to a gap in the boulders on the hill a hundred yards away.  He said, "Can we go see that cave?"  I checked my watch and said, "Why not?"  We had a conversation prior to that where I let them convince me they were old enough, strong enough, and cautious enough to tackle the tough terrain between us and the cave.  I wanted to test their resolve and see what they truly believe about themselves.  They were both 100% confident they could scramble up and down the steep rocks.

We stopped to see this odd barrel cactus growing up out of the boulder.  Some say life is fragile.  i say life is unstoppable.  If this cactus can make it work under such unfavorable conditions then it proves the resilience of life. 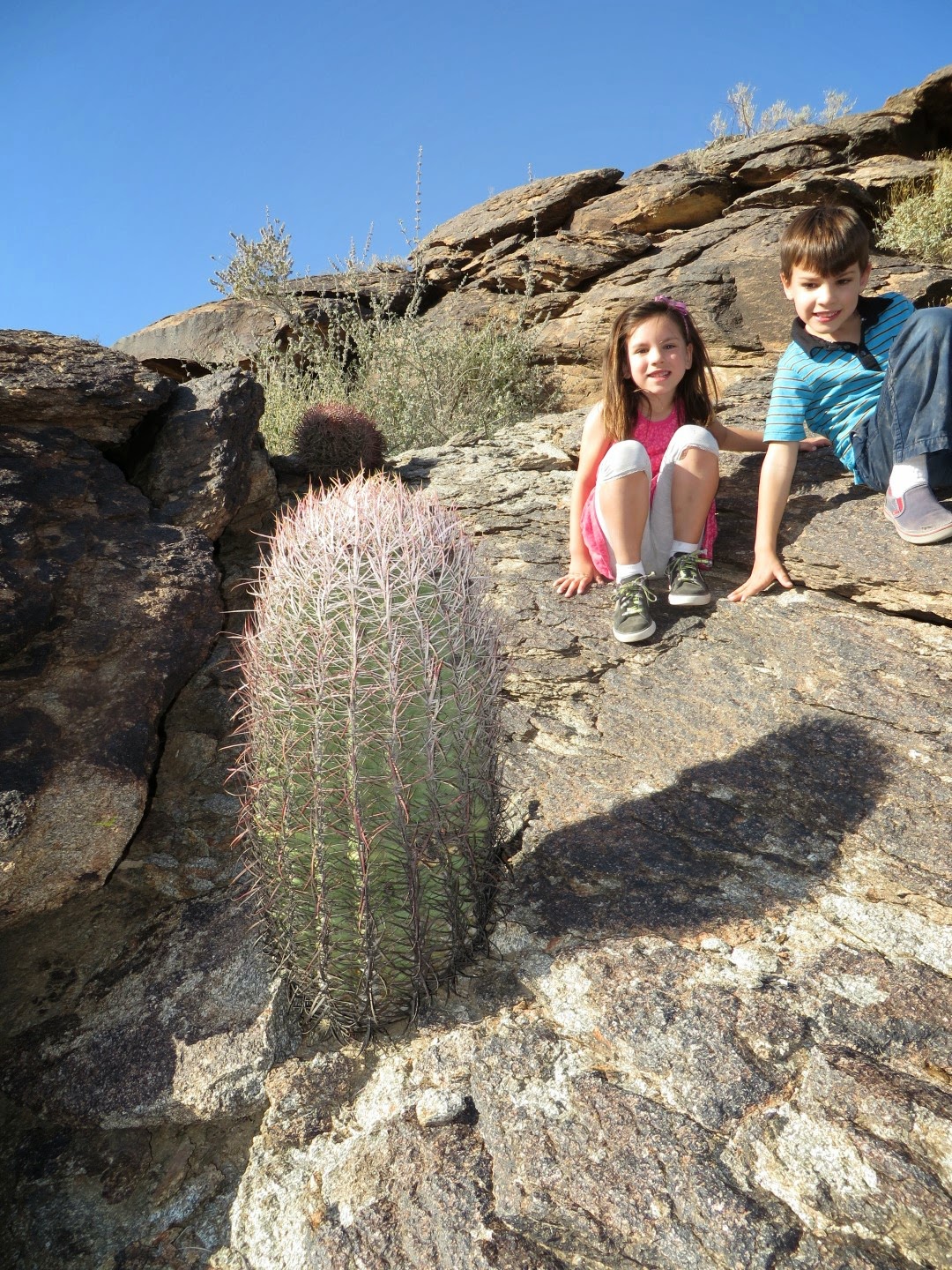 We made it to the other cave and back down safely.  A few scrapes and dirt spots were the only down side of our 2-hour hiking and rock climbing adventures.

For Joanie's birthday I wanted to do something creative.  Her and her kids are really good at these kinds of things so I wanted to go outside our normal happy birthday phone call to make her feel special.

We only get 30 cloudy or rainy days per year in Phoenix.  On our hike day there were very few clouds in the sky, but as we headed up into the rocks Layla spotted this happy face directly overhead.  I took this as a happy birthday sign for Joanie directly from God. 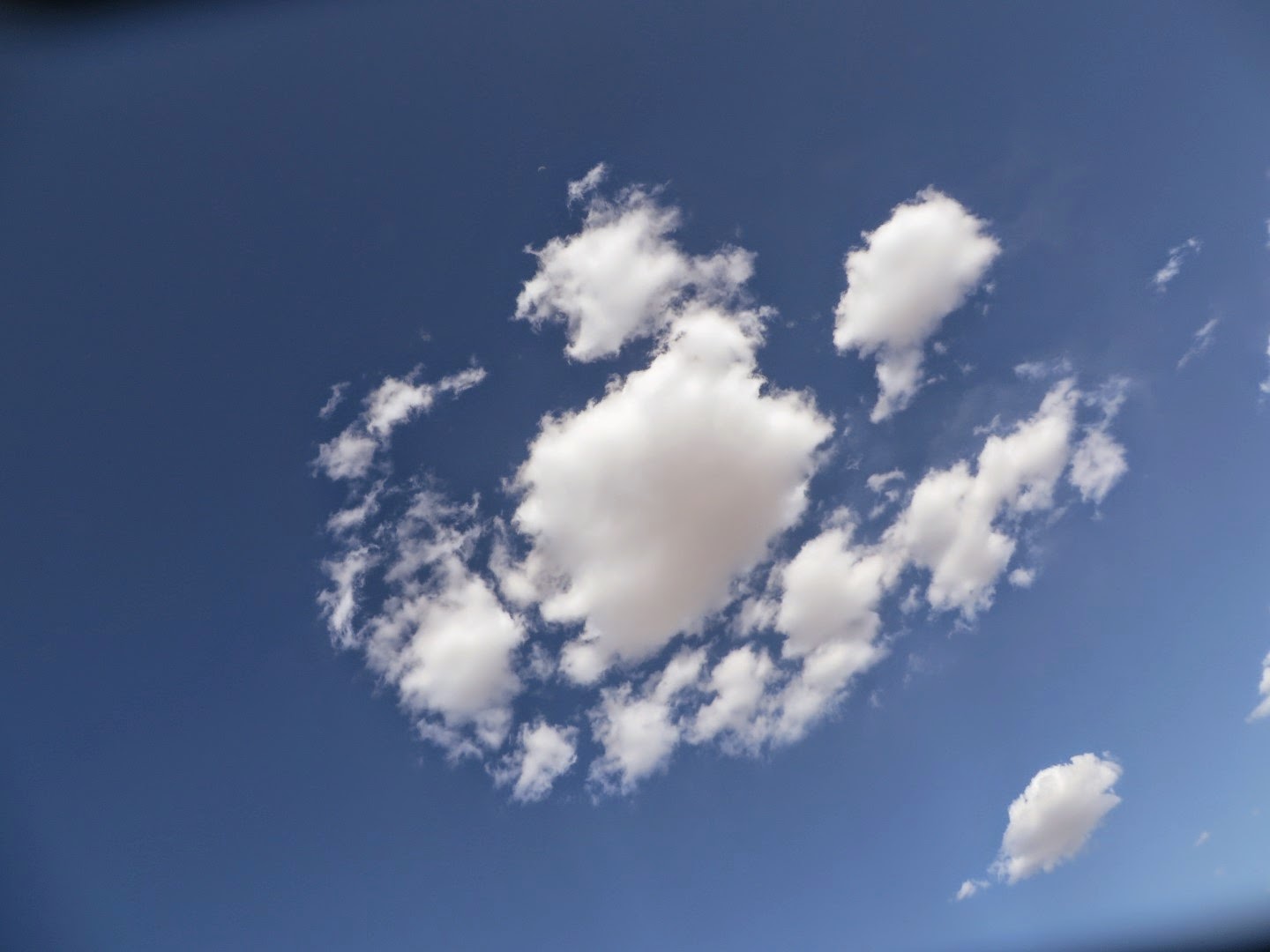 While we were in a valley on the side of our mountain I found a flat spot and a bunch of tiny rocks.  The twins helped me clear away a spot and then spell out "Happy Birthday" in tiny rocks. Easton's foot took out the "Y" when I was ready to take pics and video.  No big deal.  That's what learning is all about and that's what makes these situations interesting.  Perfection is the enemy of excellence.  So here's Joanie's Happy Birthda... 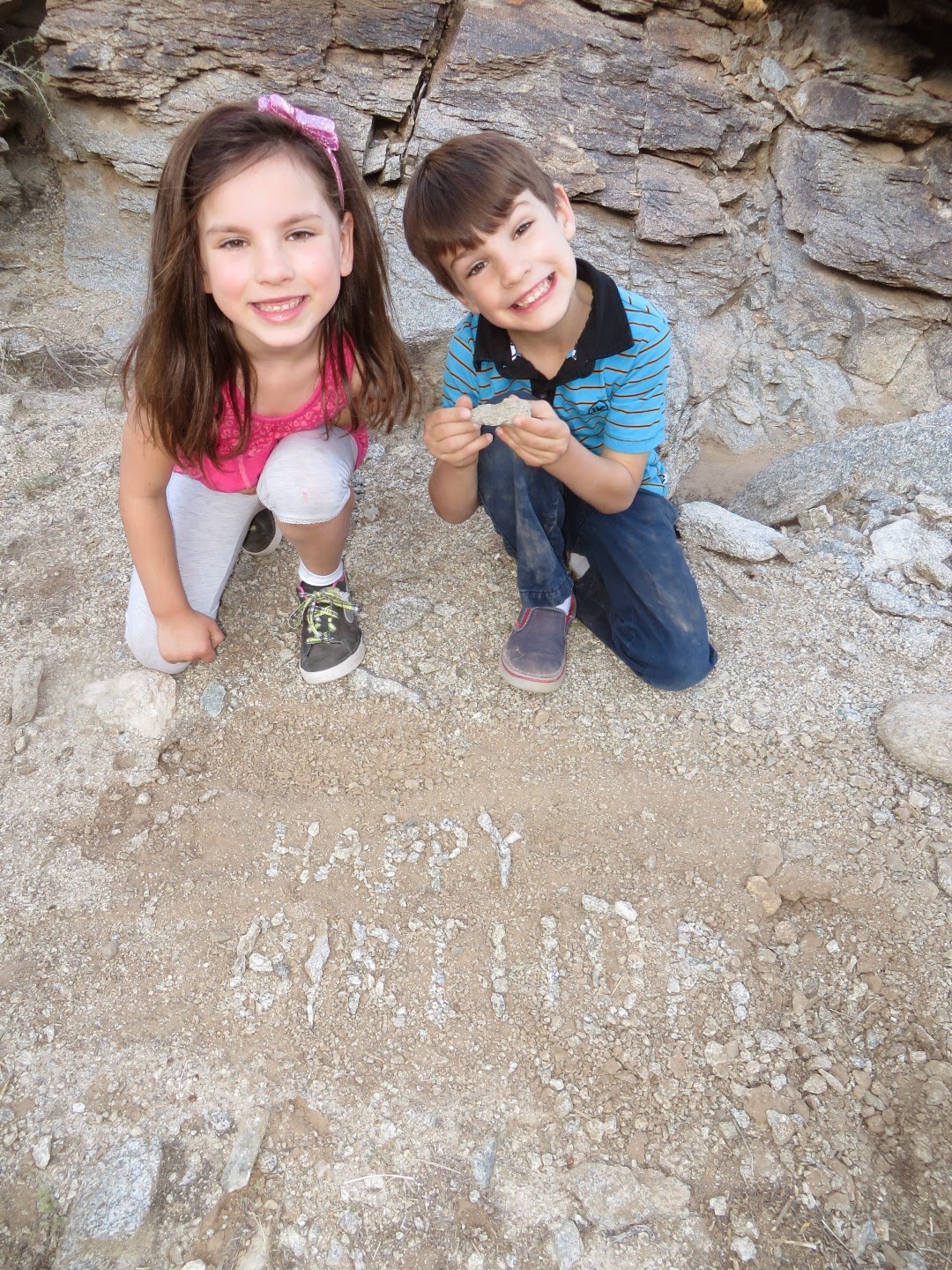 I know snail mail is preferred for cards and communications like this, but I decided to do it through video instead.  I set up the tripod and told Easton and Layla to create a personalized birthday card for Joanie.  Layla started coloring her creation and then Easton copied hers as closely as he could.  I stopped him in the middle and said, "just create what you want and whatever is in your mind."  He was perfectly happy with just duplicating Layla's creation.  I shrugged my shoulders and let him do whatever he liked.  I didn't help them with spelling because they are at the stage of creative writing.  That means they sound out the words and do their best.  Easton spelled her name "Lonea" because the J was backwards and he sounded it out that way. 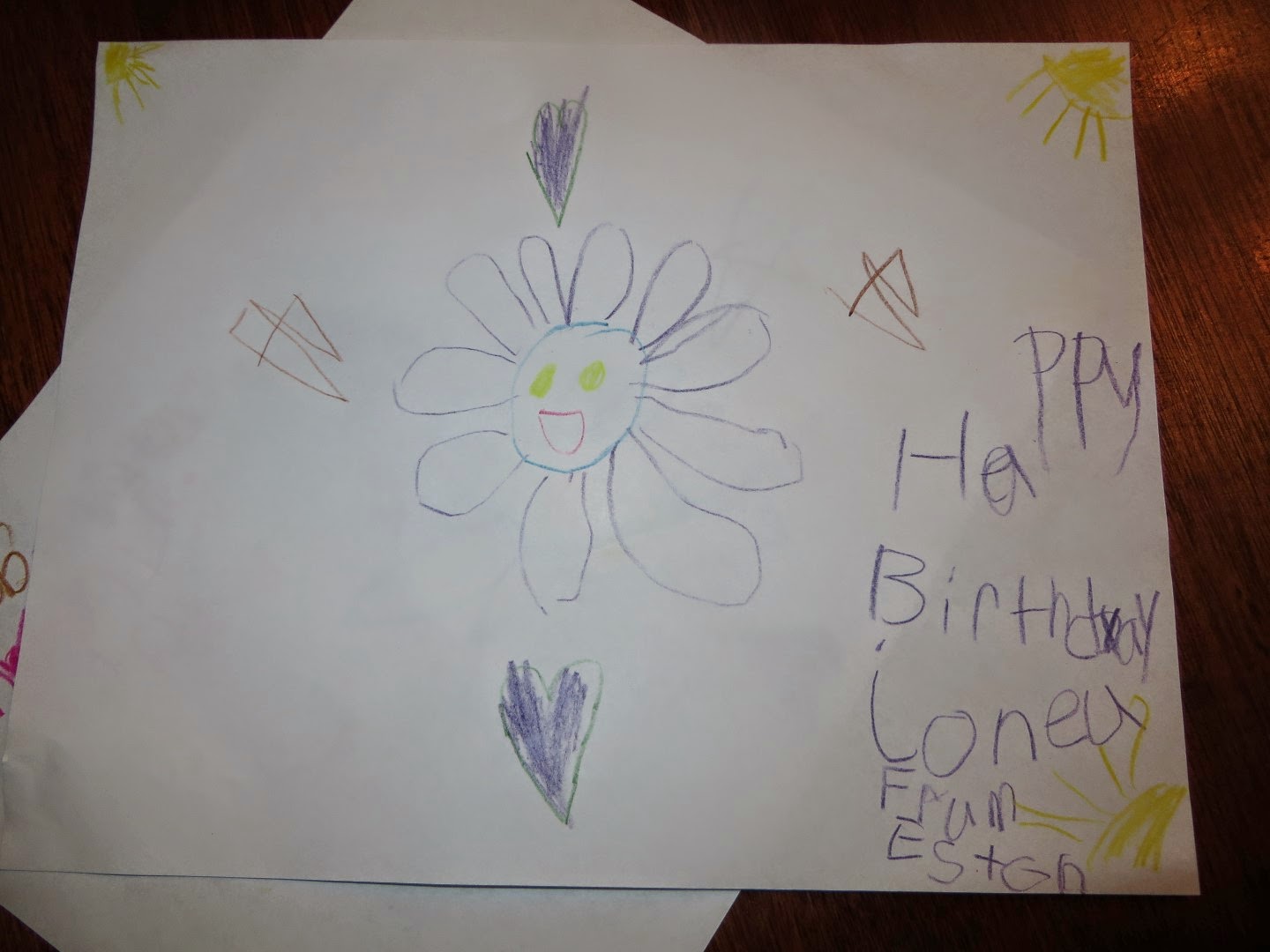 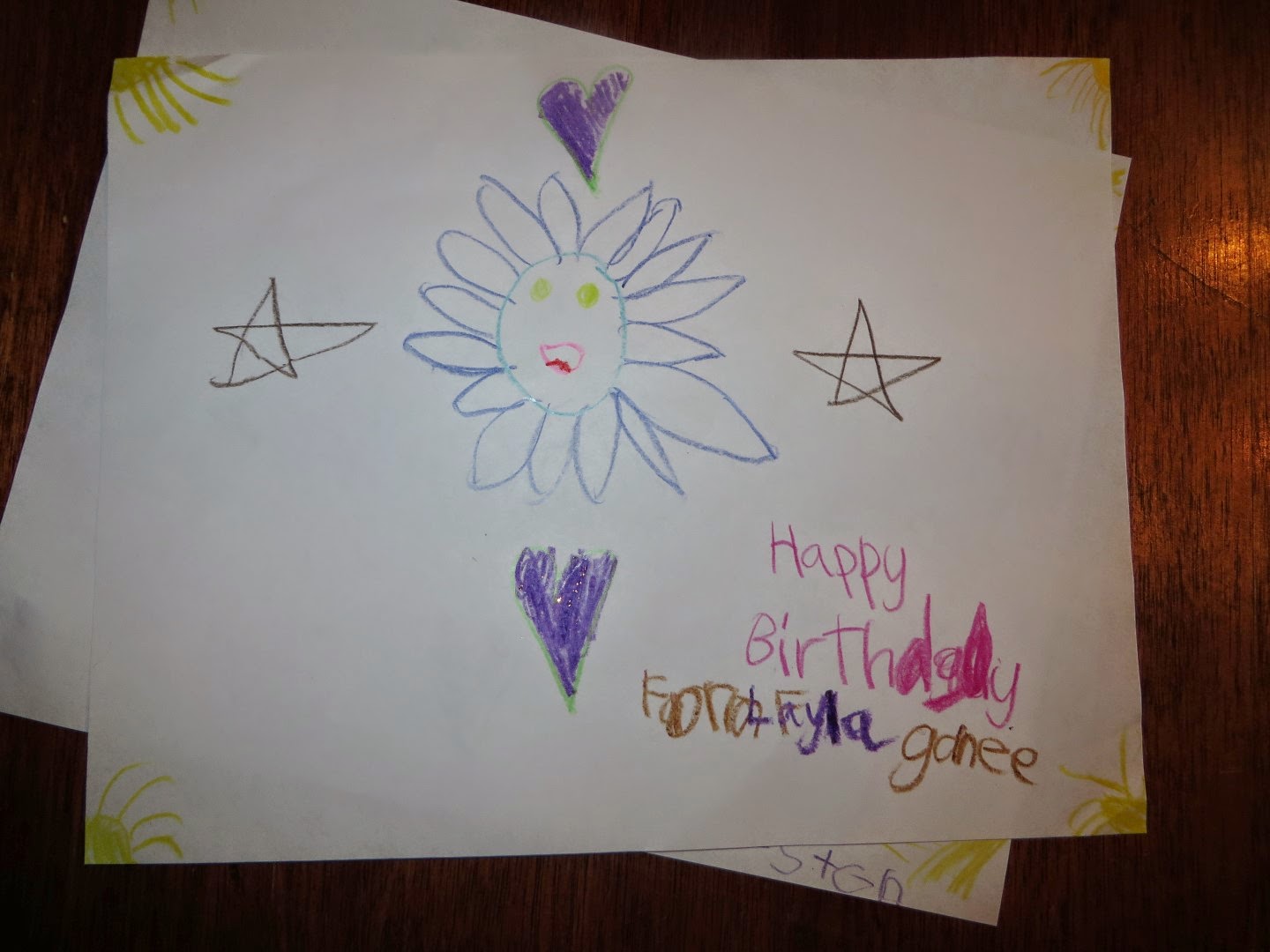 
Easton and I sat on the sidelines with our cameras in hand.  I still have my old DSLR Canon.  That became the training camera for the twins to use.  It's like giving a Ferrari to a 16 year old to learn how to drive.  I'm really glad they are getting this kind of exposure to photography (pun intended).  I took this picture of Layla practicing her dribbling skills. 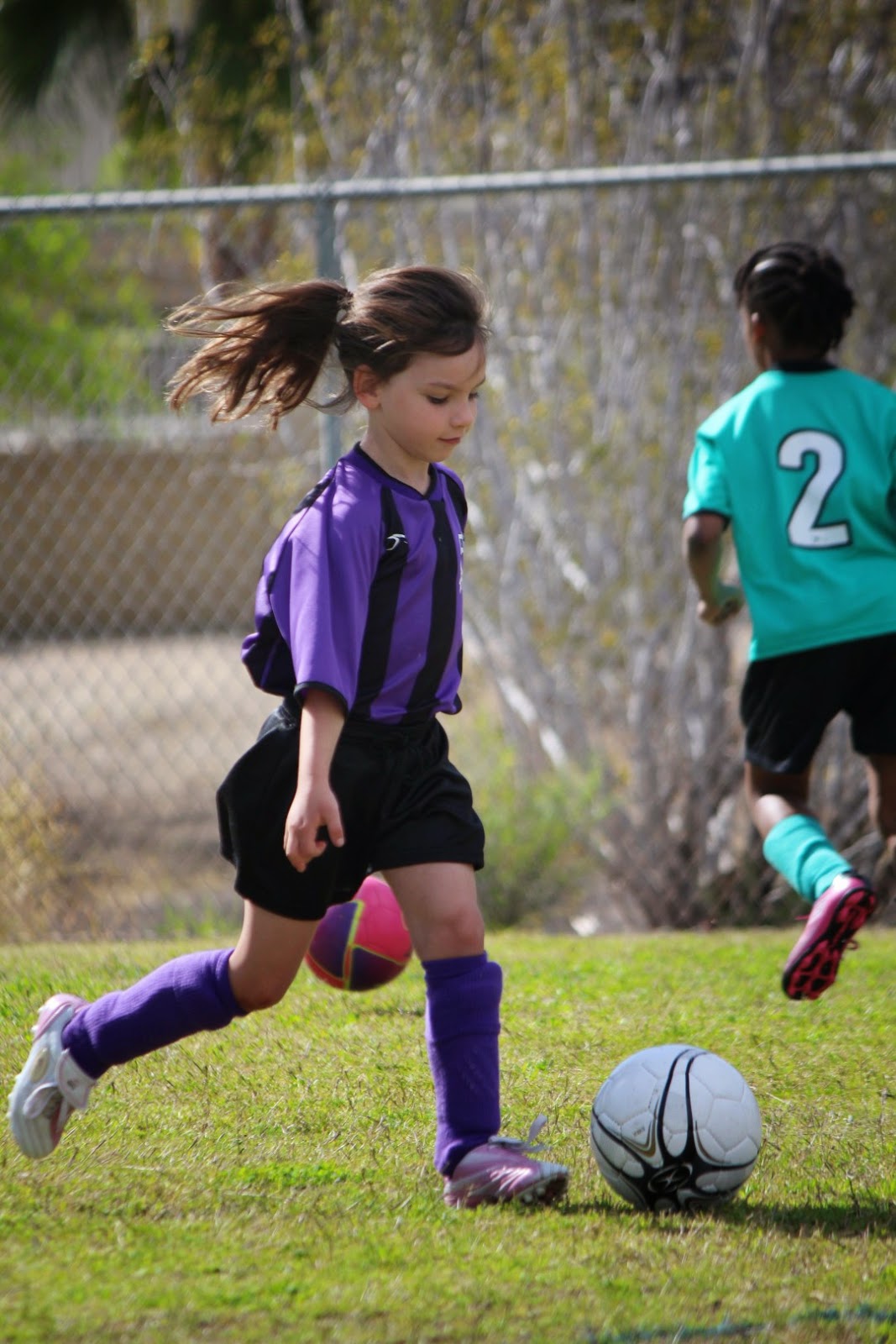 Easton took this picture of Layla in the game after she missed a goal by two inches.  Great pic for a six year old!  He's learning to hold the camera still and get the right balance of background and subject. 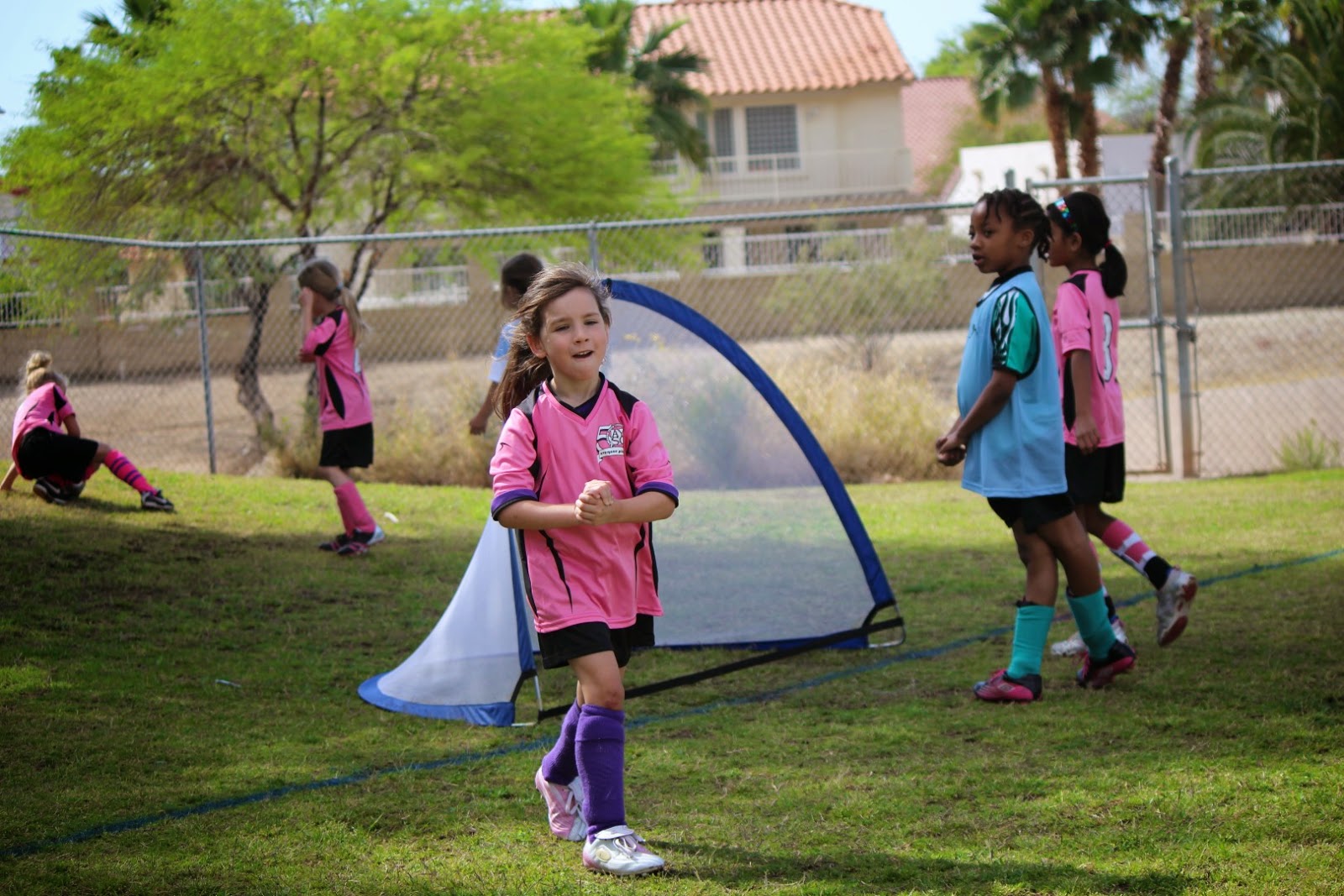 This one captures the essence of Layla on the soccer field.  She loves to play because it feeds her social interaction needs as well as her competitive spirit. and the pink jersey matches her pink shoes.  can't beat that. 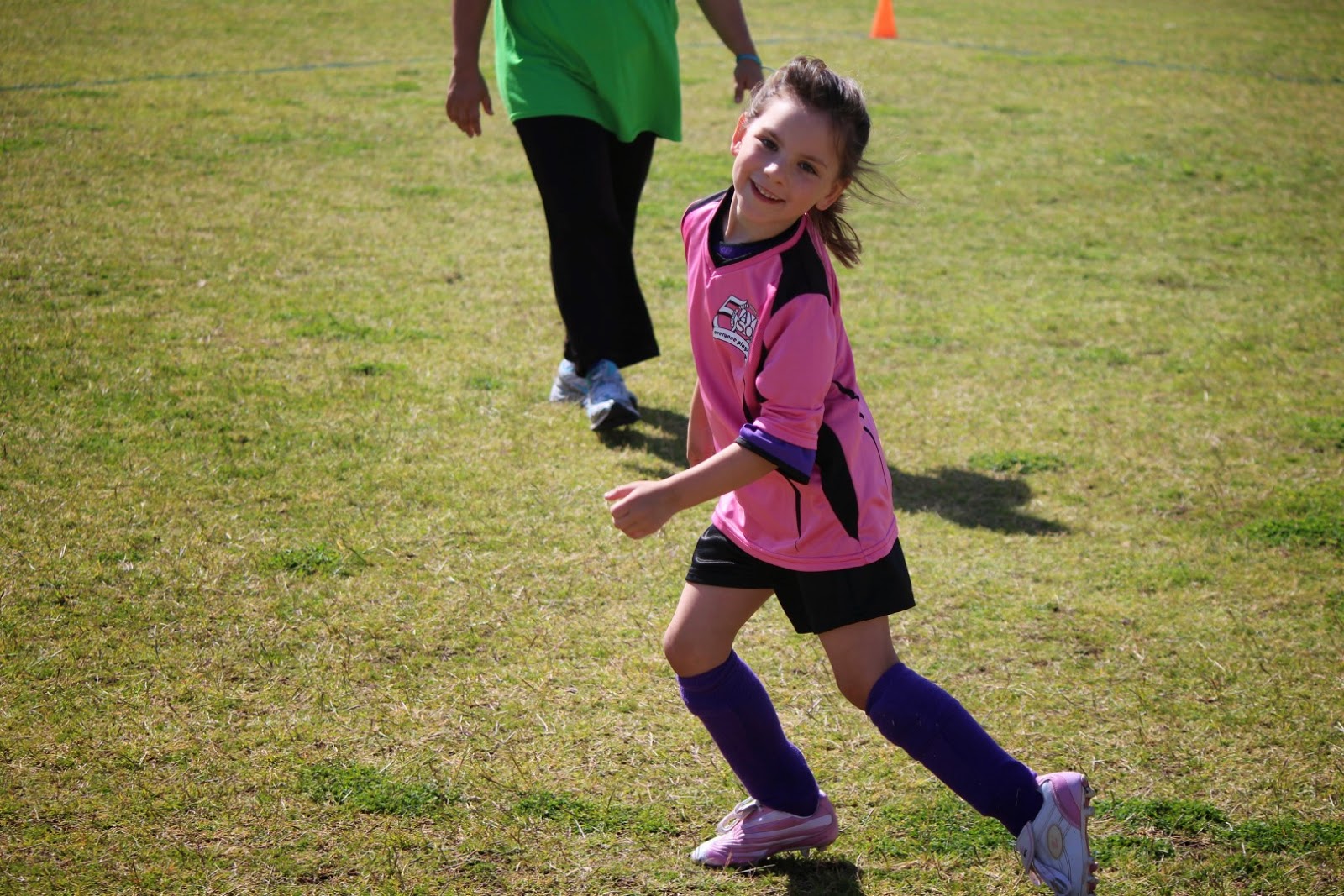 Right after the game we went directly to BounceU for a birthday party of Layla's classmate.  Her friend, Alex, is the type of girl who calls Layla her BFF one day and then says she never wants to talk to her again the next day.  I don't like that about Alex, but I can't force Layla to be friend with anyone and I can't force her to not be friends with someone.  This is a valuable time because Layla talks with Kendra and I each night about her friend.  We have a chance at this age to help her through the dysfunctional parts and celebrate with her for the fun parts.

I could easily say, "don't ever talk to her again", but there will come a time when I won't have that level of influence.  She will eventually have to make her own choices based on her understanding of what a functional relationship is supposed to be.  As always, our job as parents is not to keep Layla from the world, but to help her know who she is and how to be functional IN the world.  The most frequent phrase I say is, "I know what she said, but what does  God say?"  Then we talk through truth and sometimes she knows already what God says about her and sometimes we walk Layla through hearing God's voice.  This birthday time was all smiles and joy though. 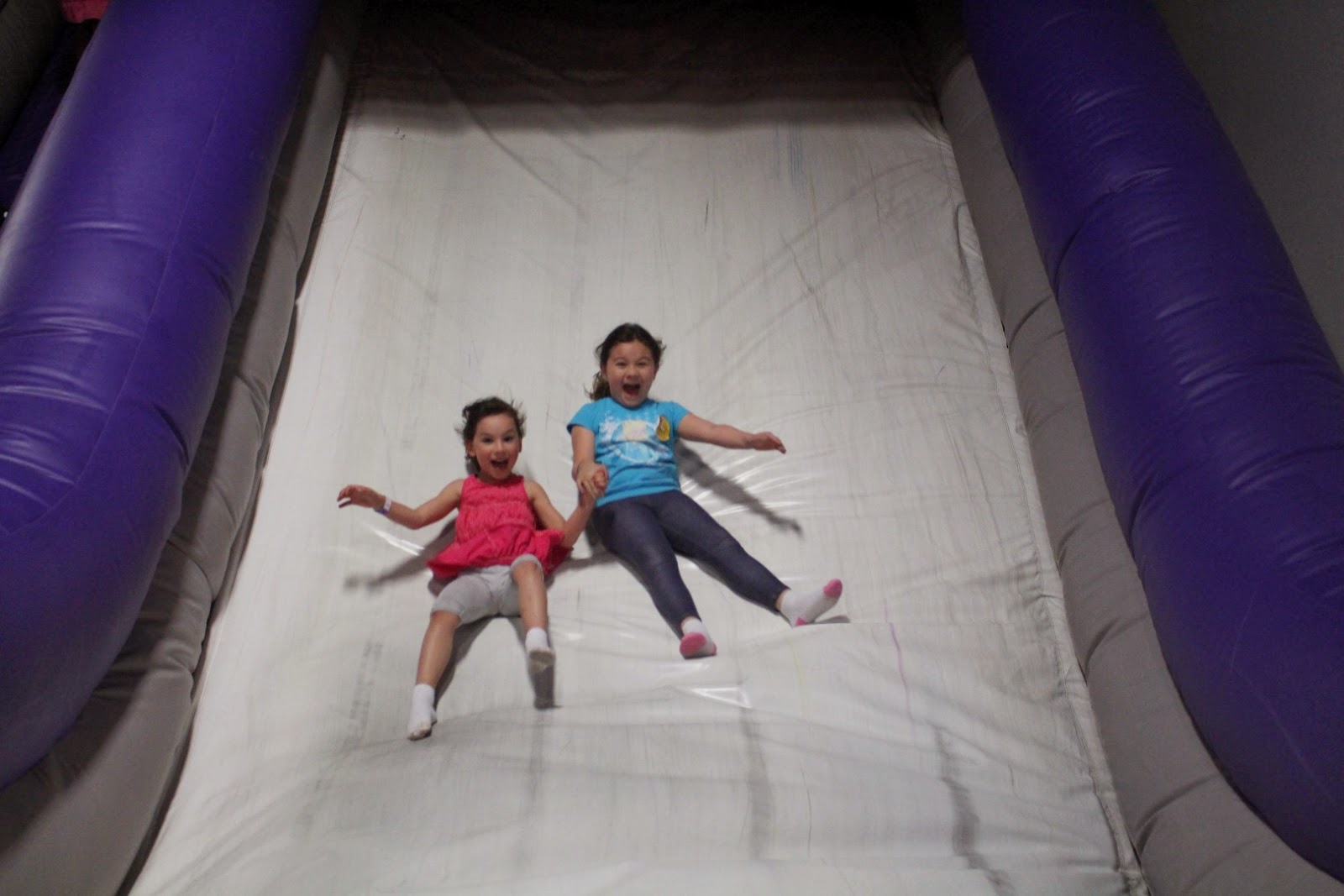 Easton had a few of his buddies show up at the party, but occasionally he went off on his own to slide and play.  He's much more socially independent than Layla, but I think their balance is about normal for a girl and a boy at this age. 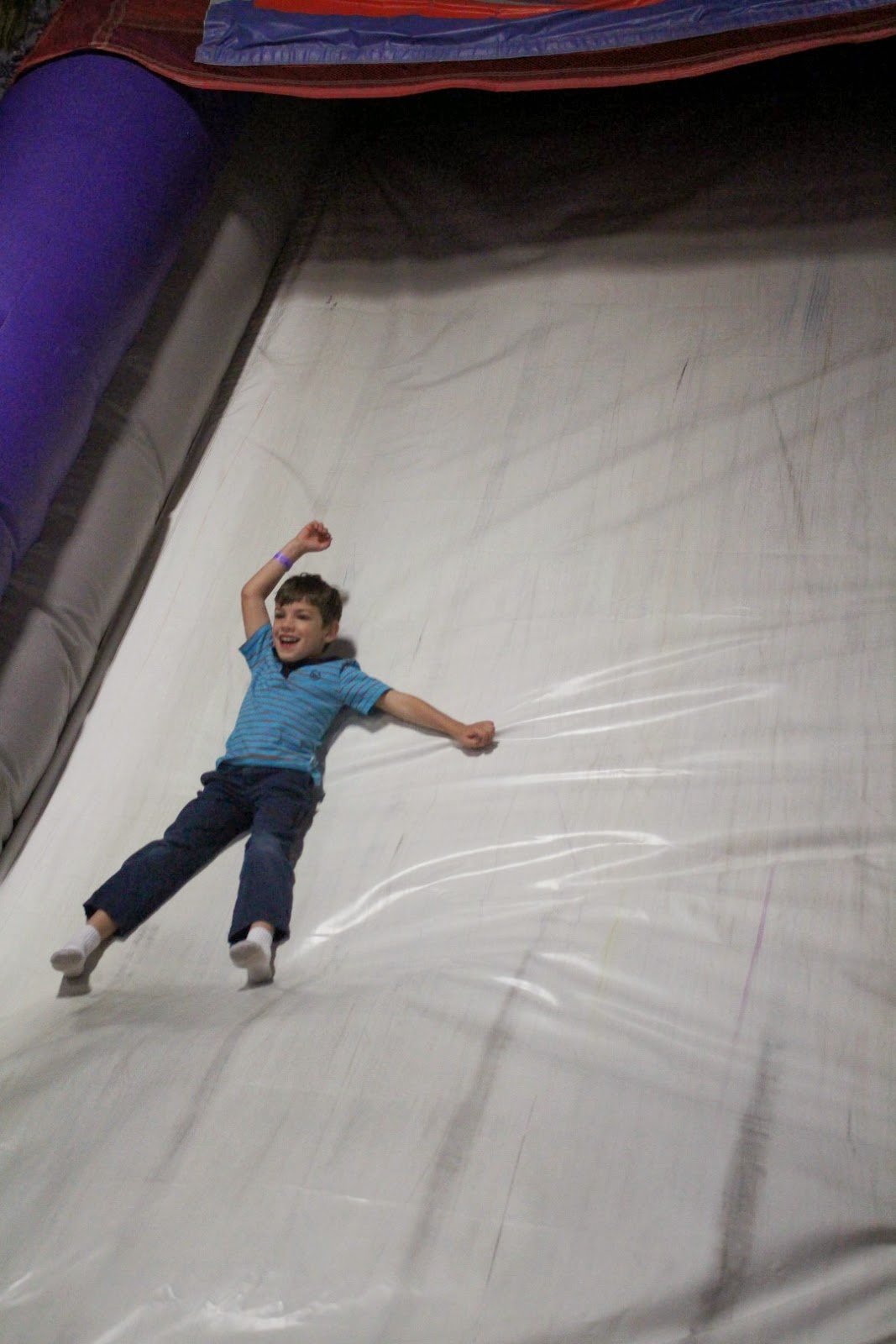 This one bounce thing was a sloping column with velcro patches on the side.  Kids run up and high as they can, slap the flag to the highest velcro spot possible, and then slide down.  As they slide down they become human bowling balls taking out several kids.  I had a good laugh watching the kids wipe out each other all the way down. 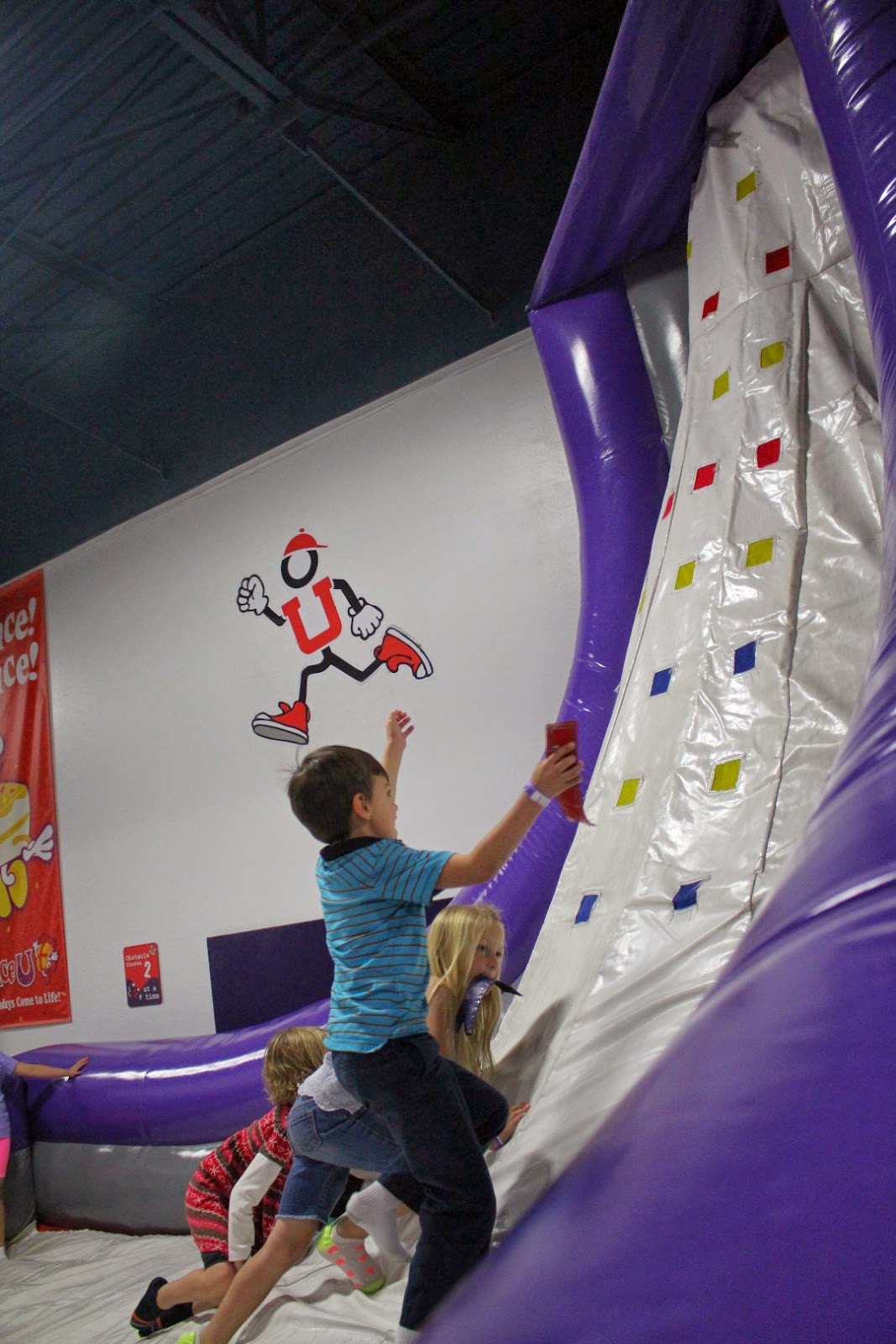 Sometimes the twins play together even in the midst of 30 friends and classmates.  There is some amount of time that goes by and they think "where's my brother/sister?"  I can see them looking around for each other and then they blab about what each one has been up to.  Layla was pointing to the spider web and describing how cool it was. 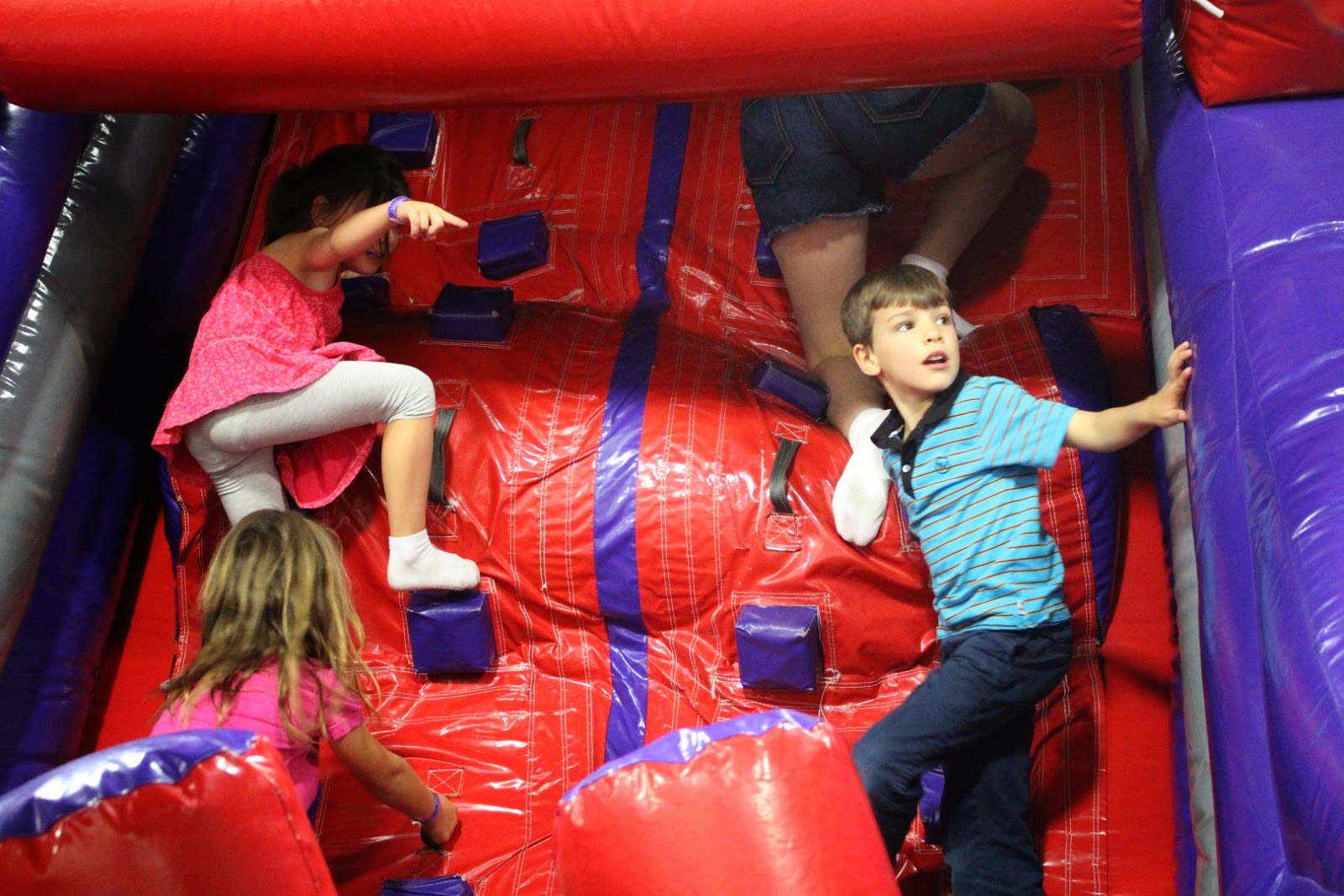 This is the spider web. 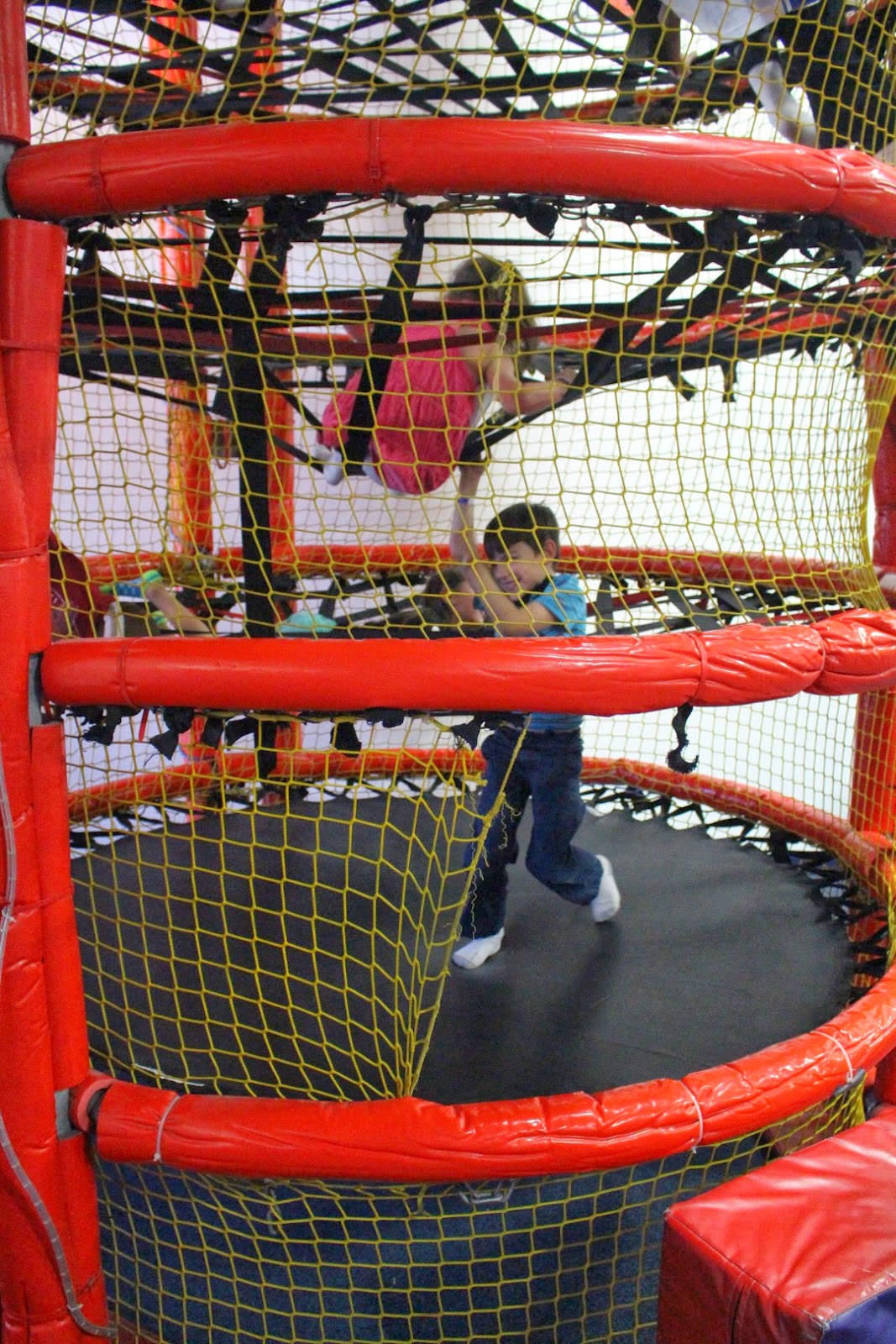 Easton is on the bottom level of the cylinder.  Layla is on the first level.  It has 5 or 6 levels of elastic straps which create the floors/ceilings.  What a genius contraption!  They played in here for 20 minutes and would have stayed all day if I let them.

Easton's favorite attraction at BounceU was the ball gun arena.  put a ball in the top-load gun, aim, pull the trigger.  He's got a pretty good aim too! 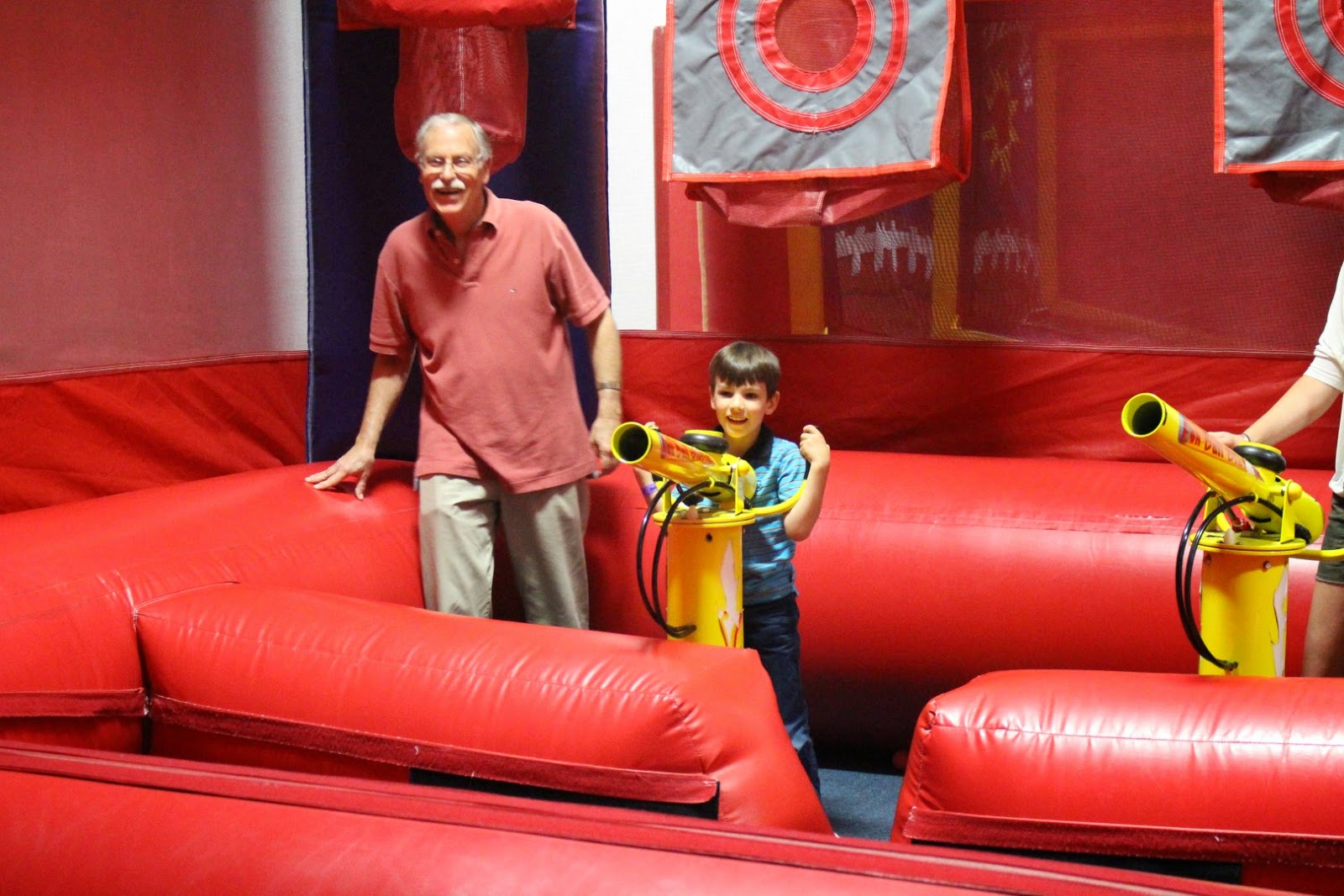 When all the energy was spent, the kids packed in a room to load up on pizza and lemonade.  I dislike pizza and don't like the twins to eat it, but at a birthday party like it would be difficult to ask the hosting family to bring a healthy salad and turkey sandwich.  So, pizza it is! 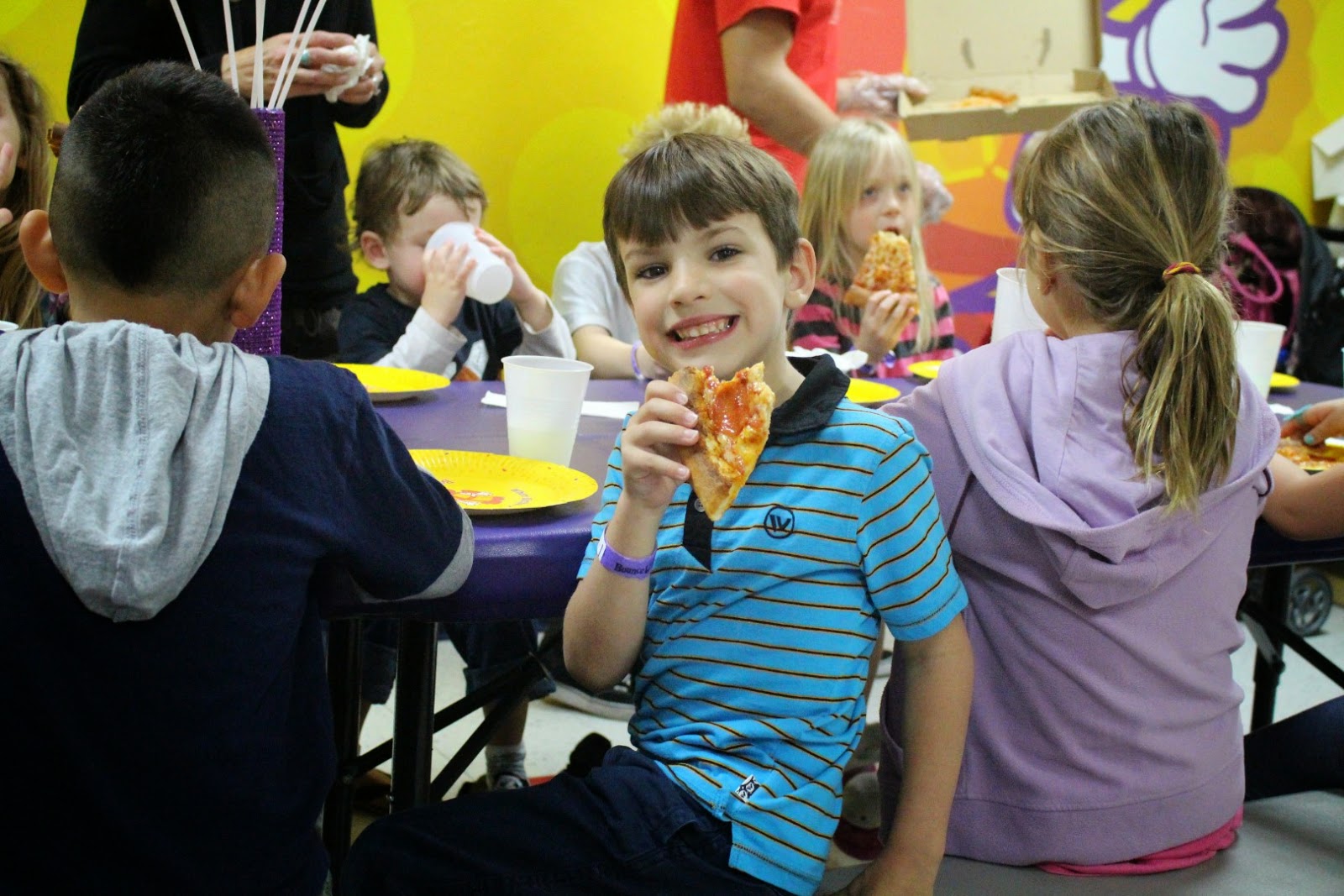 Layla had the privilege of sitting next to the birthday girl.  I had no idea it was such a popularity contest to see who can sit closest to the birthday girl.  I just don't remember caring about when i was a kid.  The table of kids stopped eating long enough to watch the pictures of their bouncing and playing time scroll through on the monitor.  That was a nice to touch for BounceU to take pictures and then post them so quickly to let the kids see themselves playing. 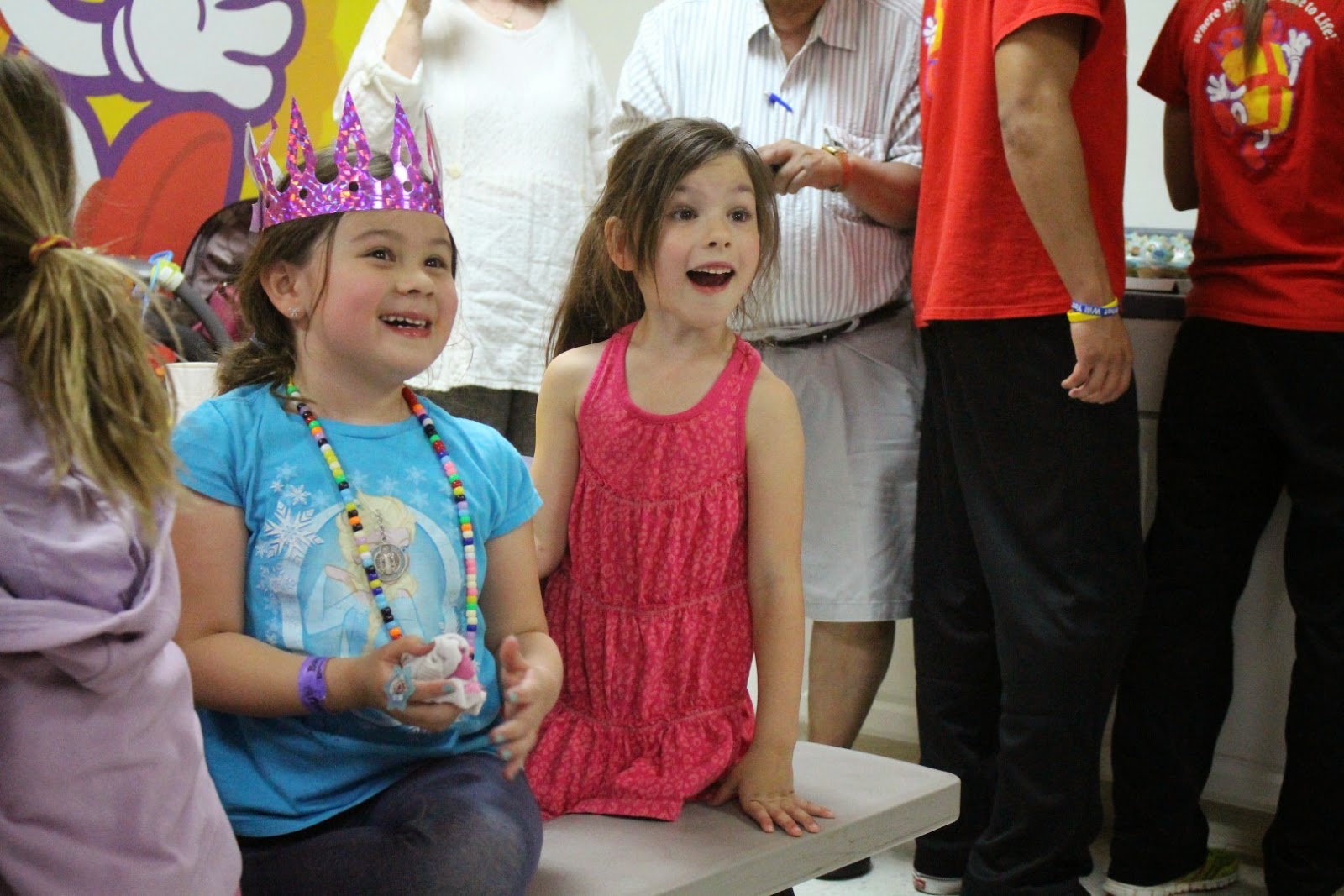 After cupcakes were devoured and presents opened we said one last happy birthday and gave hugs.  The party was so great that Easton and Layla begged me several times since then to have their 7th birthday at BounceU.  We'll see... 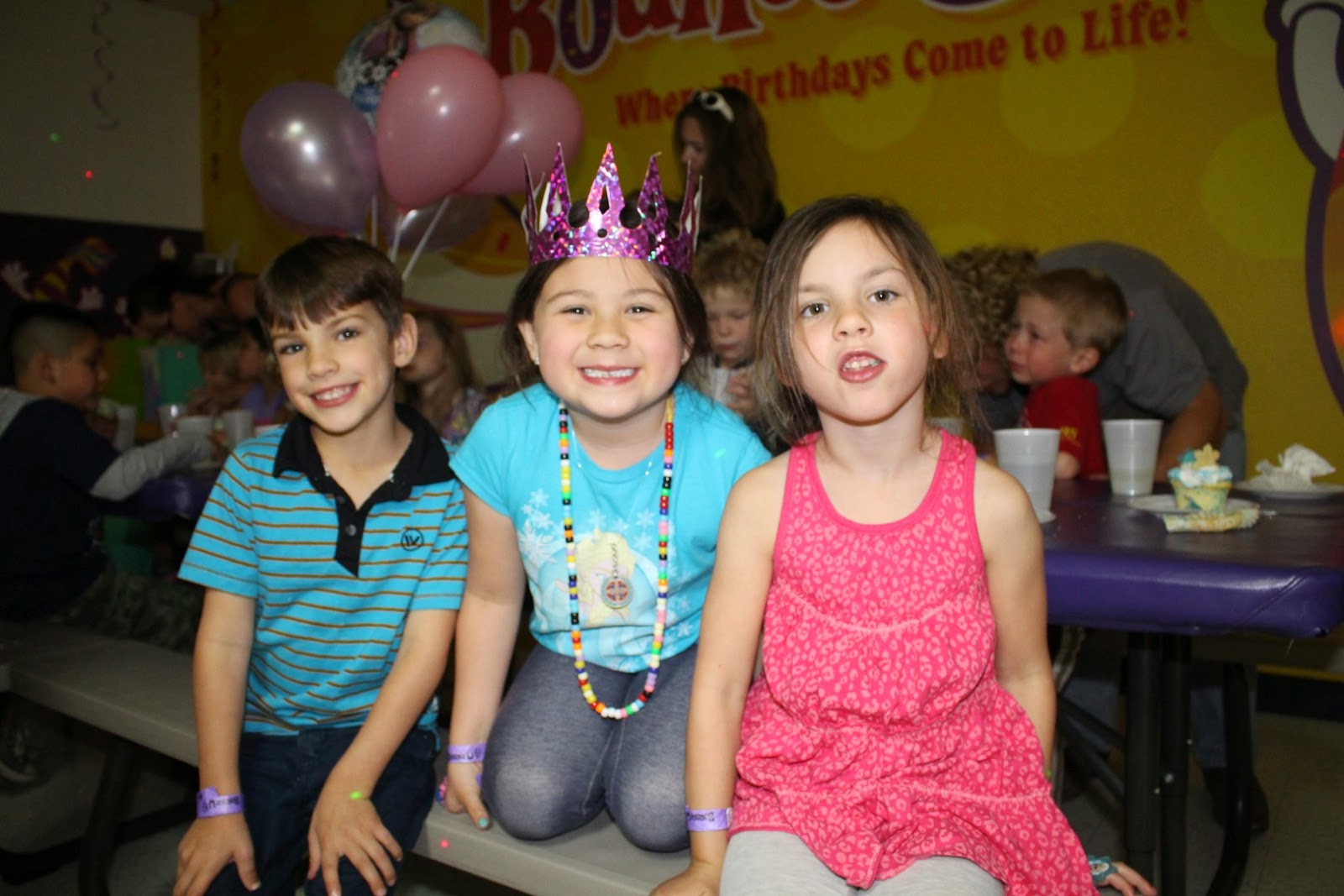 Then on Sunday Layla went to another birthday party with Kendra.  It was an all-girls invite only so Easton hung out with me.  I don't think we have any pictures of that birthday, but i'll ask Kendra. We were birthday'd out and ready for bed by Sunday night.  Just in time to get back to school and work where we can rest!