Summer is officially here.  I don't care what the calendar says.  when the 4 Webb's pool is 78 degrees, it's summer.

This video clip is random and funny.  Easton swims like a fish!  The end is especially humorous when Layla tells me my hair is turning white because I'm getting old. Truth comes from the mouths of children!


I have a golf tournament coming up and a new set of clubs to break in.  I'm ready to make the jump from my 18 year old set of Big Bertha irons to Dad's set of Ping clubs.  I can't believe it's been 18 years of golfing with the same set of clubs.  Dad bought me that set when I was still in college!  I certainly got his money's worth out of them.

I took Easton to the range to hit a bucket of balls.  We ate a burger in the golf course restaurant while watching a live PGA tournament on TV.  As you can imagine, Easton had a dozen questions for every stroke and commentator's comment.  Nothing gets by this kid.  We hit 100 balls together.  Check out the flex on that driver! 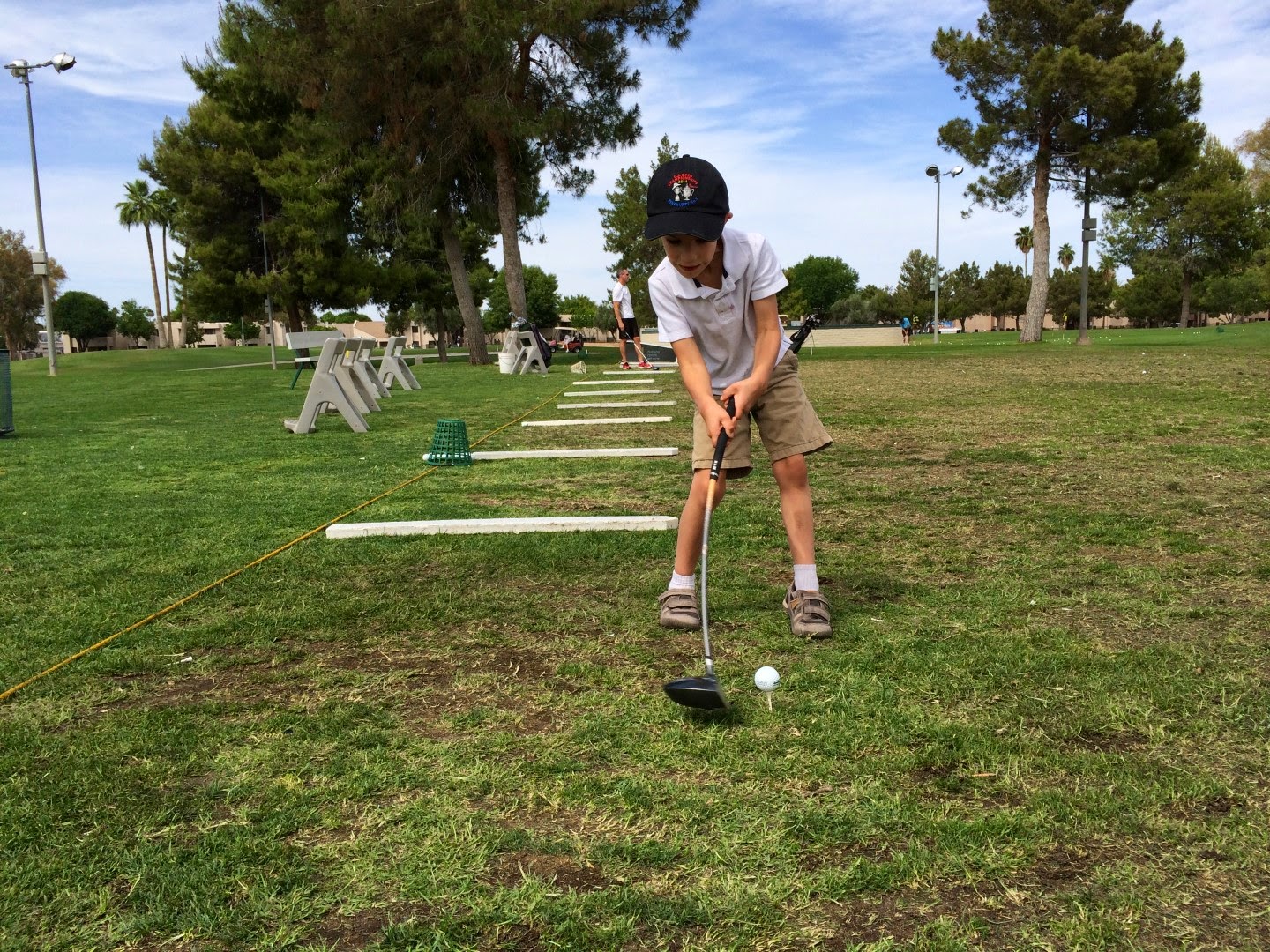 The three guys behind Easton in this next picture paused to watch him hit.  Their encouraging compliments were well received.  He may be getting a little cocky...  He declared this as "the best day ever" as we drove home.  Mission accomplished, Dad. 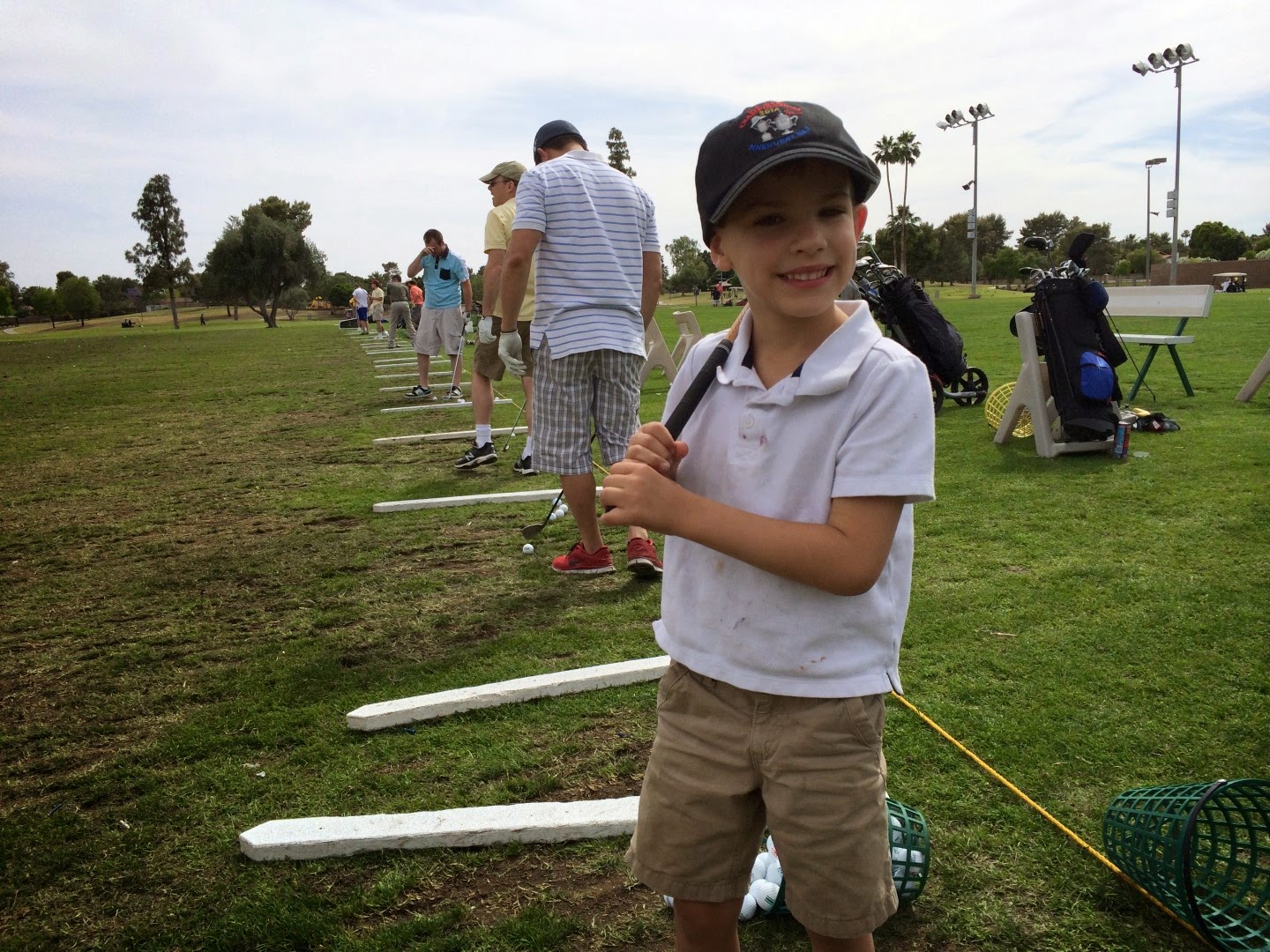 We had a whole Saturday with nothing to do.  By nothing I mean, no appointments, no visitors, no ministry, no travel, no nothing.  We sat Friday evening staring at our calendar and saying, "there must be some mistake?  We have nothing?"  No mistake though.  it was true!  Kendra and I and Layla slept in Saturday, which hasn't happened since the last blood red moon.  Notice I didn't include Easton in that. Mr. Happy Sunshine is waking up earlier and earlier because of the sun's pattern.

We had breakfast as a family, then went to the movies to see Rio 2.  The dust storm was blowing through with high wind so we were happy to enjoy some time indoor together.  After the movie we share a plate of hummus and vegetables at the Pita Jungle.  Not sure how many other six-year-olds cheer when Mom and Dad say, "we're going to have hummus and veggies for lunch!" but ours do.
The weather cleared up enough to go to the zoo for a 2-mile stroll through the animals. 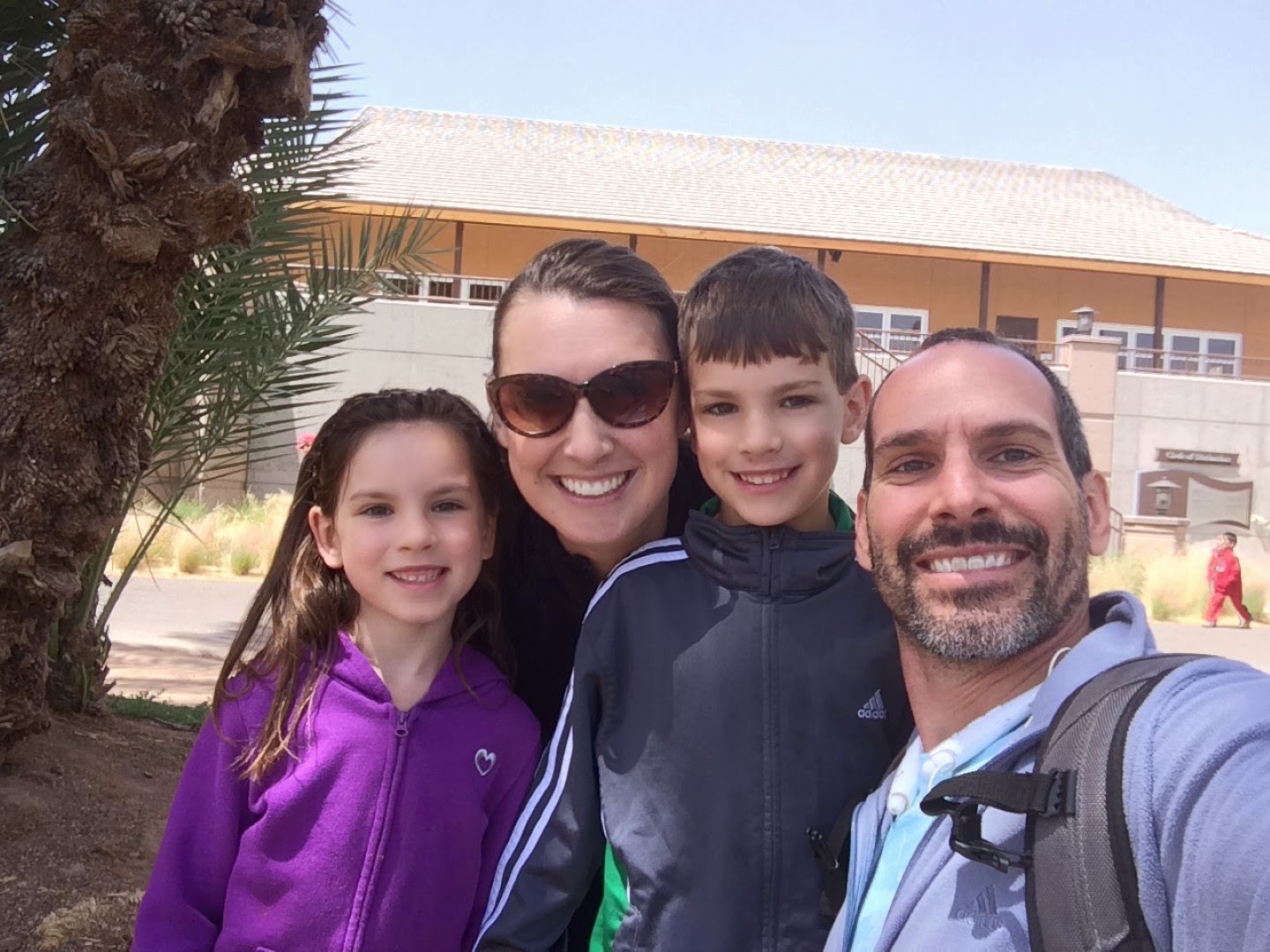 We stopped by the Scarlet Macaws exhibit to see and hear the actual birds portrayed in the Rio 2 movie.  Easton and Layla had an "ah-ha!" moment when tying the movie and real life together. 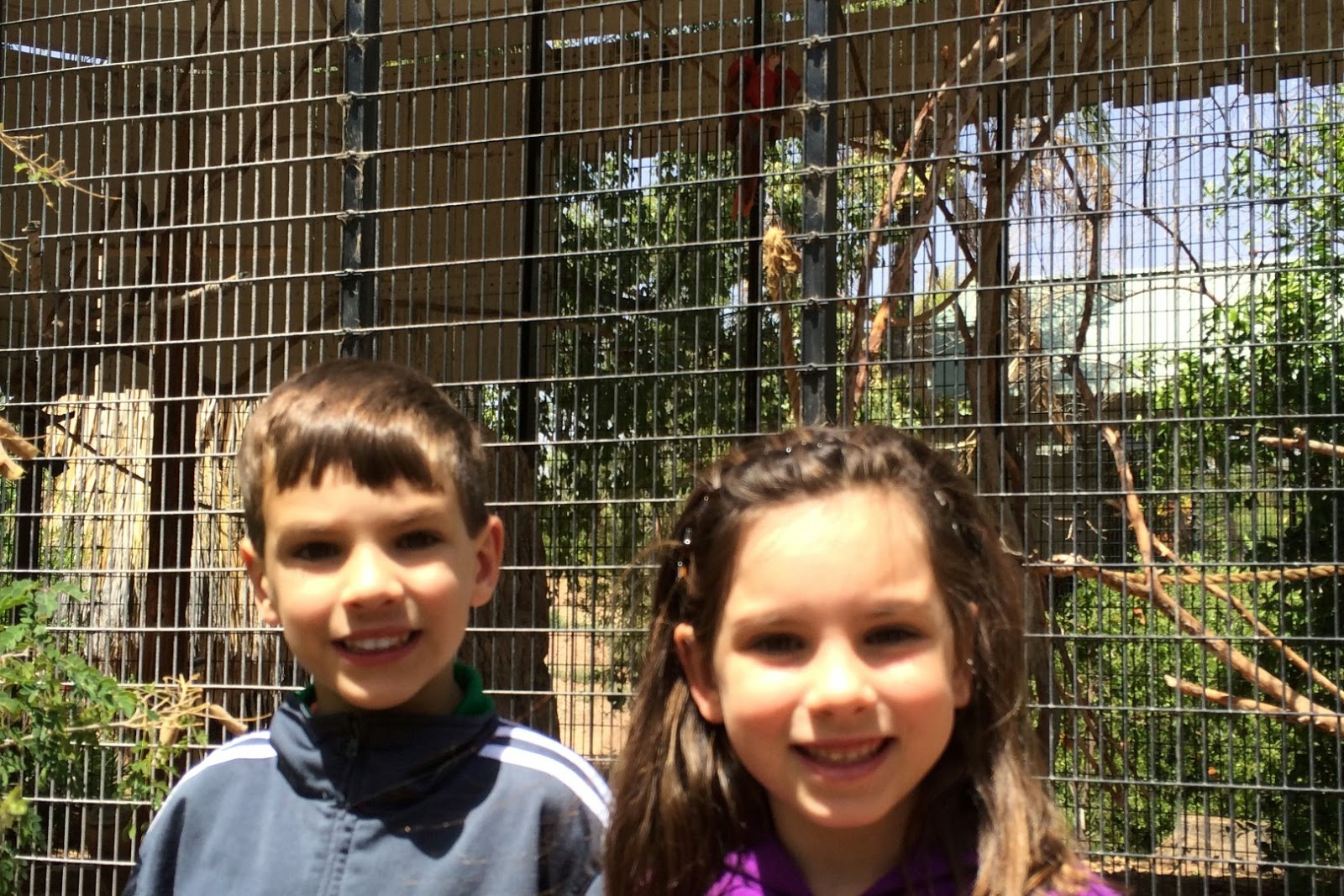 Lovely Layla picked flowers as we walked along the paths between animal cages.  She tucked a flower inside another and said it looked more artistic this way.  She's got an eye for beauty as always. The twins took a rest in a carved-out tree trunk.  I told them I wanted to take a picture and they posed like this. 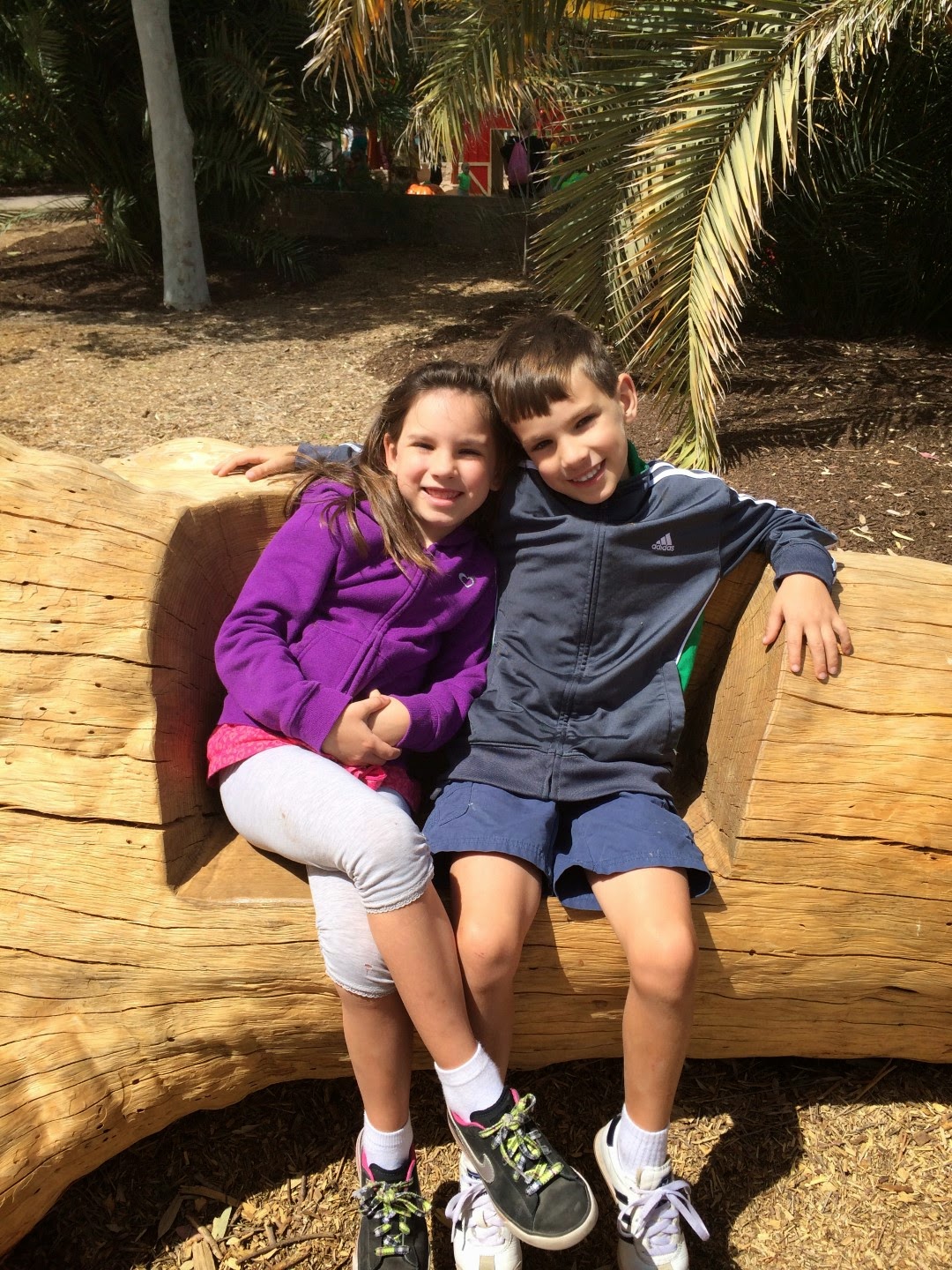 Then I sat with Kendra to do our best to recreate the pose.  They really are mini-me versions of Kendra and I.  My favorite part of the zoo trip was holding Kendra's hand as we walked along the path together.  Casually watching Easton and Layla run between cages is a much more enjoyable experience than pushing them around in a baby stroller. 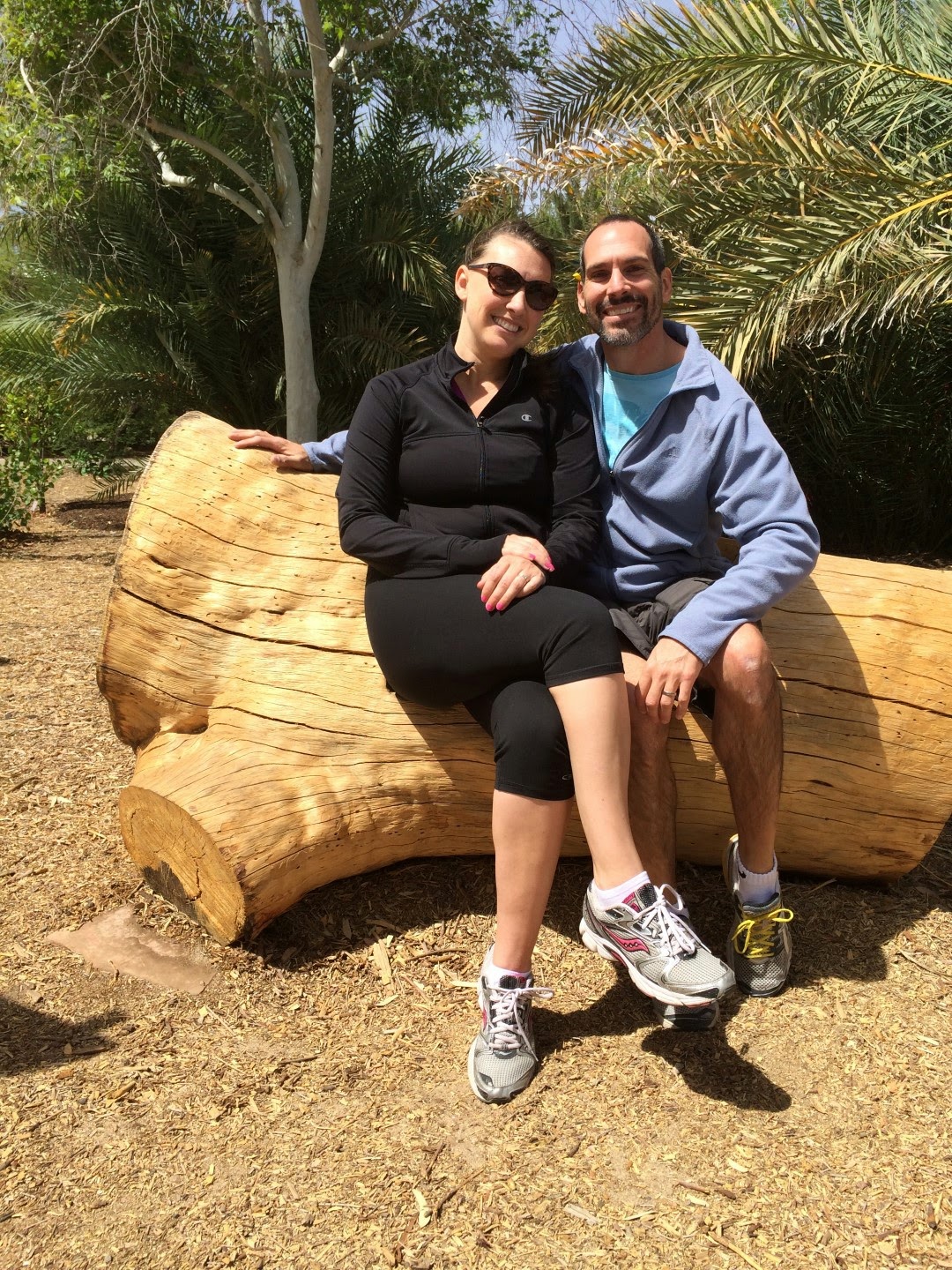 This is as close to farm equipment as they get since we are raising urban city-kids.  I like this picture of the twins though.  It is a real joy to watch their personalities and imaginations develop. 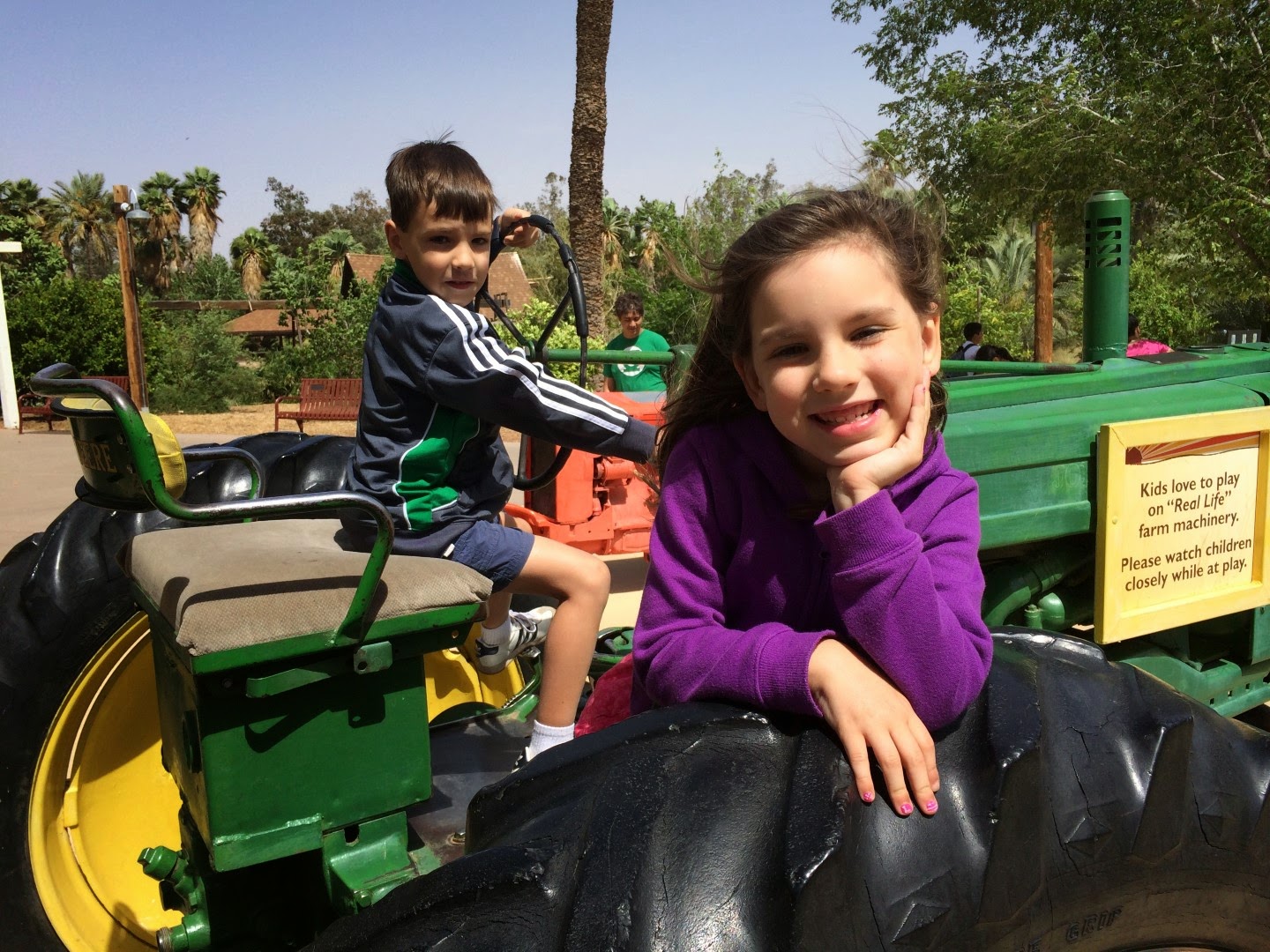 We also stopped by the petting zoo to pester the goats.  Layla found this one to claim as her own.  A lady near by noticed the goat had a plastic bottle lid in its mouth.  I calmly grabbed the goat's face and pried his mouth open.  The lady was attempting to get the lid out of it's mouth, but wasn't courageous enough to stick her hand in there.

The zoo keeper saw me across the way and yelled, "Hey! what are you doing to the goat?"  All eyes of the 40 or so bystanders glared at me in disbelief.  I wasn't thinking about it at the time, but it probably looked like I was abusing the poor goat for no reason.  The zoo keeper walked over to give me an ear full, but then noticed the plastic lid I was trying to keep from going down the goat's throat.  The zoo keeper grabbed the lid out it's mouth and her demeanor changed quickly when she realized I was trying to help. 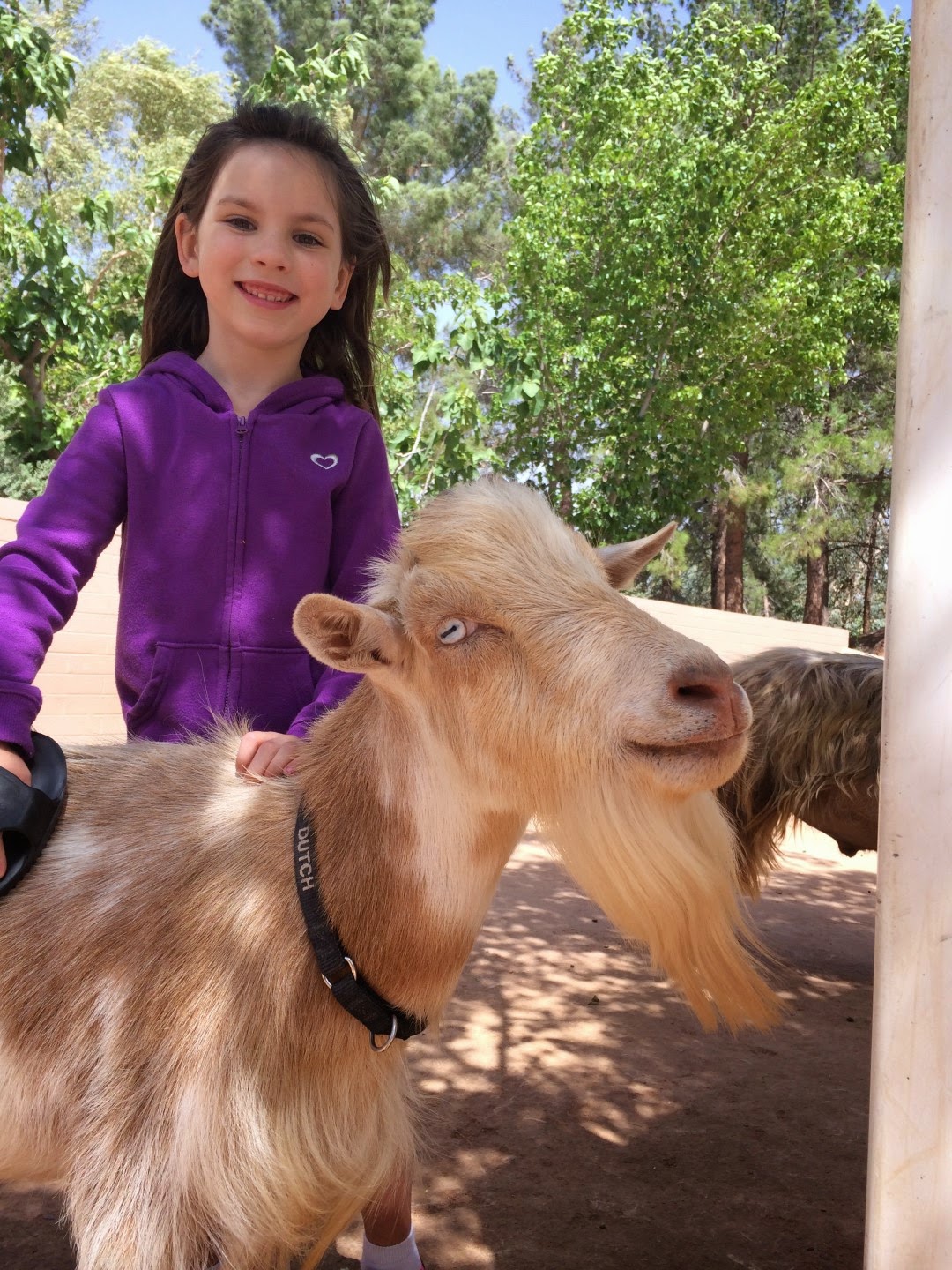 She never announced my heroism to the bystanders so they probably still think I'm a goat abuser, but Layla thinks I'm a hero and that's all that matters.

By the way, as a "thank you" when we were leaving, the goat peed on Layla's shoe.  She's a princess, but not afraid of a little goat pee.  She didn't freak out or cry.  She simply said, "Can you explain this to Mom for me?  I don't think she's going to be happy about this."

I used this as teachable moment for Layla.  I said, "even when you help someone, they may pee on your shoe, but you know in your heart what you did is right and that's all that matters.  We help others no matter what they do or don't do in return"  That's sound advice for any kindergartner!