With my birthday coming up, Kendra said there is interest to have a birthday list.  I've decided to open a "Buy Bronson a Birthday BBQ" fund.  What I really want (and need) is a new propane BBQ grill.  Mine is ancient and falling apart.  The lighter is broken, the pan is warped, the temp gauge is broken, and burners are getting rusted.  I got my money out of the cheap grill, but need to get a real nice one since we are committed to eating at home more than ever.

I have more pictures and stories than time allotted to write about it, but we are three weeks away from the end of our "busy season" so there is a light at the end of the tunnel.  Our big conference is 12 days away and we have about 25 days worth of work to do to prepare.  wish I were exaggerating, but we are only given 24 hours in a day.  With time taken for work, kids, and taking care of ourselves there are only a few hours left each day.  that's what we are making the most of.  I don't feel guilty for blogging, but I do feel like there is void if I don't get to blog.  so here I am.  Now, on to the real fun...  life with twins.

"The apple doesn't fall far from the tree" is an old adage.  Easton and I are proof, there is truth to that.  Notice the similarities in our cowlick.  We had a good laugh pointing at each other's hair.  It was like looking in a mirror in some ways. 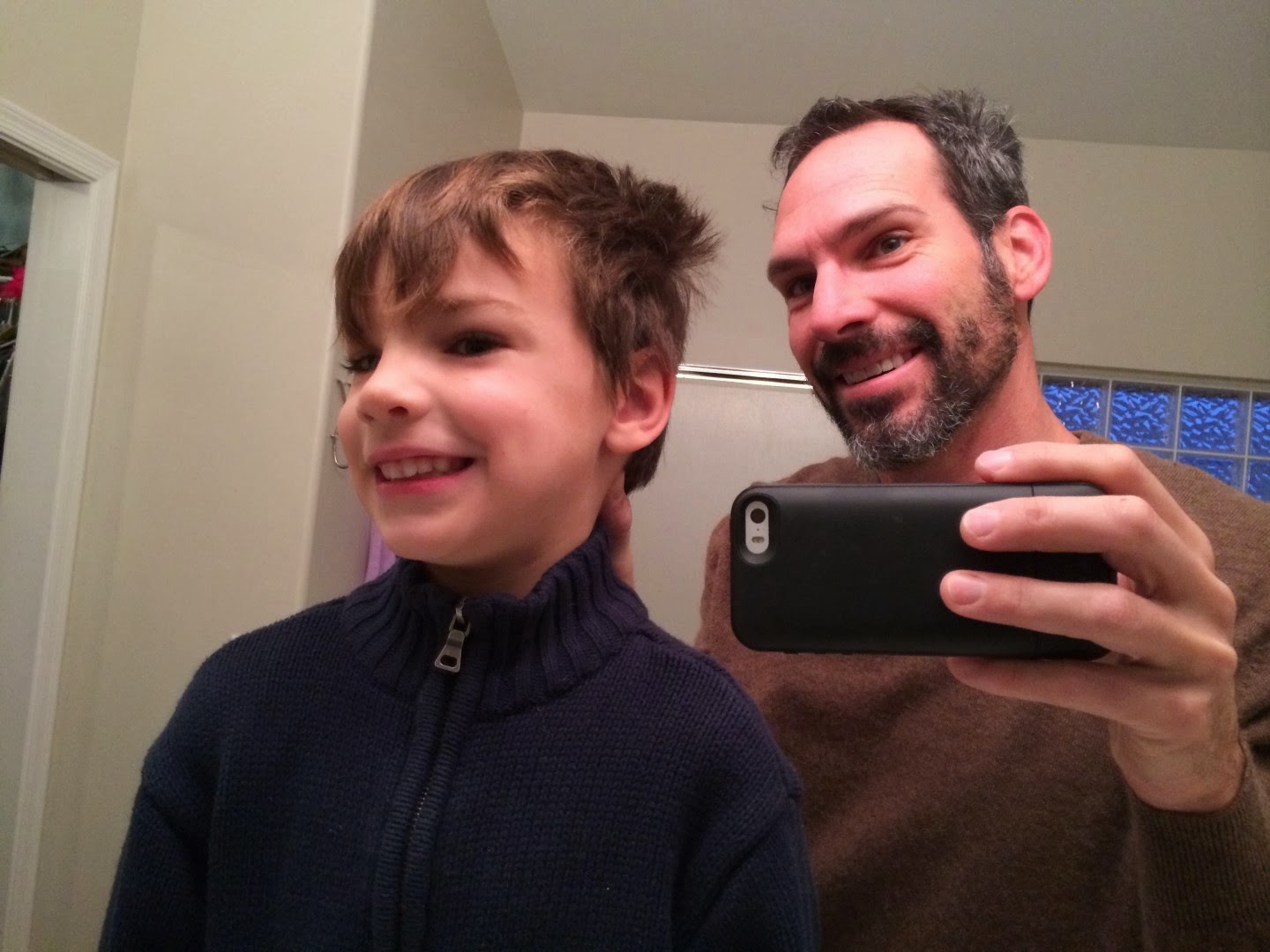 On Valentine's Day I woke up extra early and gave Kendra the gift of relaxation.  I helped the kids get ready for school, took them out for breakfast, and drove them to school before starting my work day.   She was able to sleep in and leisurely get around with peace and quiet. 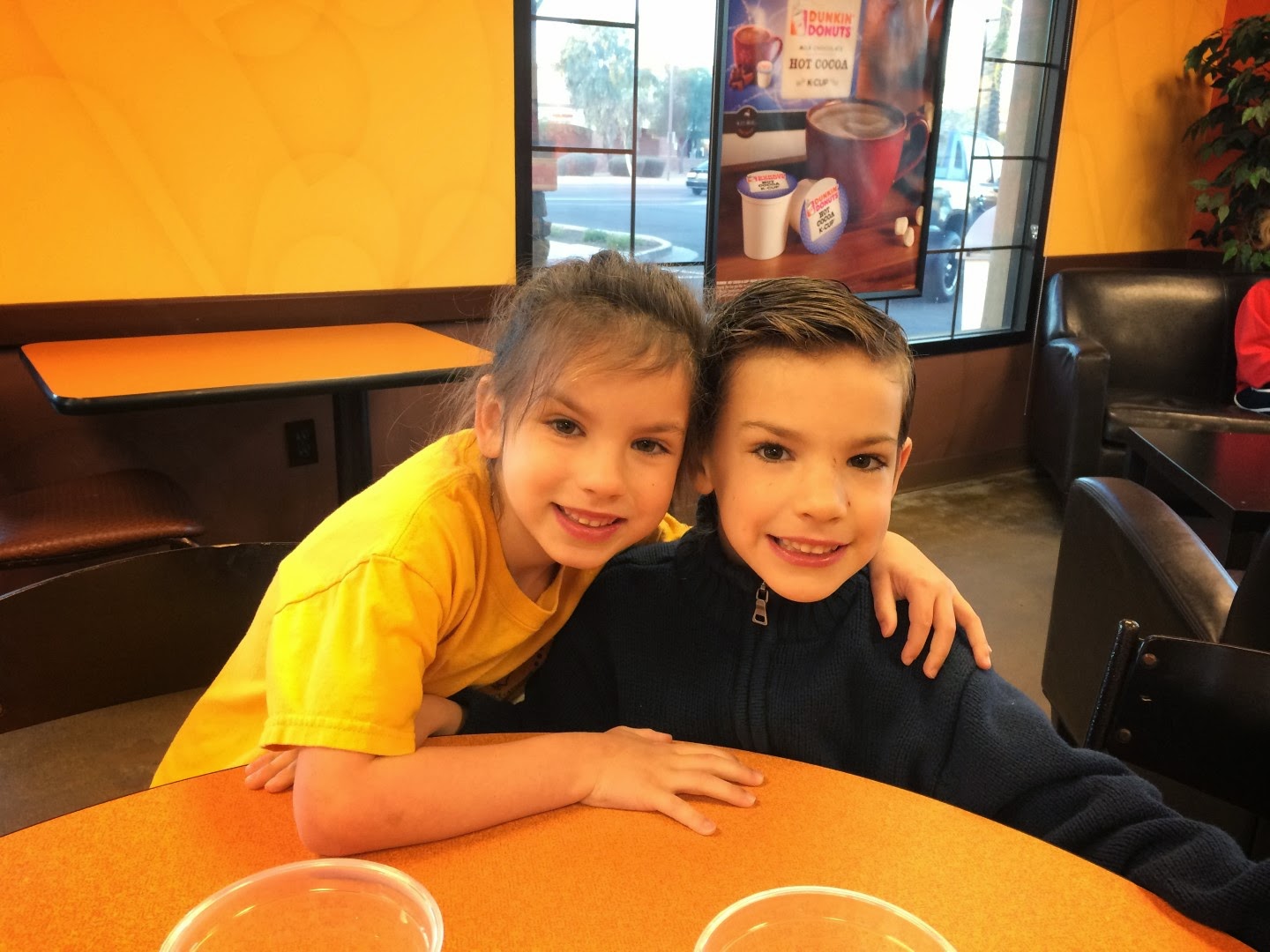 Sometimes the best gifts are significant for what they don't contain more than what they do.  Kendra and I are not big celebrators of holidays on the official date just for the sake of saying we did it on the actual day.  We have no desire to scrounge for a babysitter to go fight the crowds in a restaurant and pay 4 x the normal amount for roses.  so we don't.  we simply choose not to make it a big deal.
Instead we had a somewhat normal day of work and school and church efforts followed by dinner at home with the 4 Webbs, a few rounds of SkipBo (card game) and an evening of working on speaking notes for the conference.

the other outing for Valentine's day was a hike, without Mommy.  I gave them a choice of three well-known hikes.  they chose what we call "the peaks", which is a rapid ascent of  altitude where get to eat snacks at the furthest point before running our way back down.  We stopped on the second peak to get a quick picture. 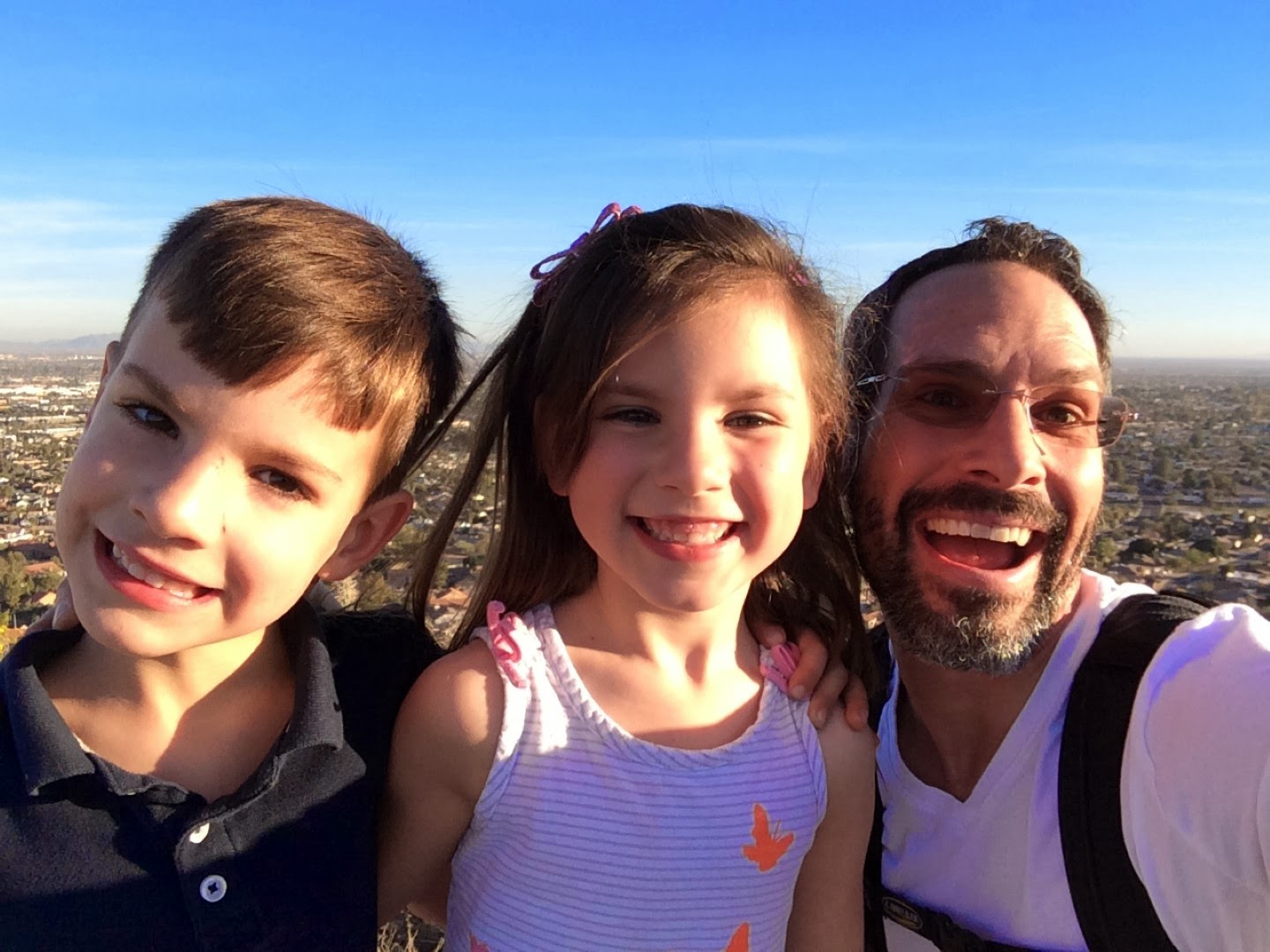 Every hiker we passed all the way up and down received a "Happy Valentine's Day" greeting from Layla and a "Have a great hike!" from Easton.  Their infectious smiles and conversations made their day for several hikers.  There were several who were stone faced or grumpy who passed by us and were lit up like a gust of happiness that washed over them as we passed.  It is truly something to behold, watching these two spread good cheer like it's coming from a fire hose.

Easton finds humor in the oddest things.  I ran ahead of them (no small feat) and turned to take a picture of them running by.  Easton launched off a rock and stuck his hand out while making a funny noise. 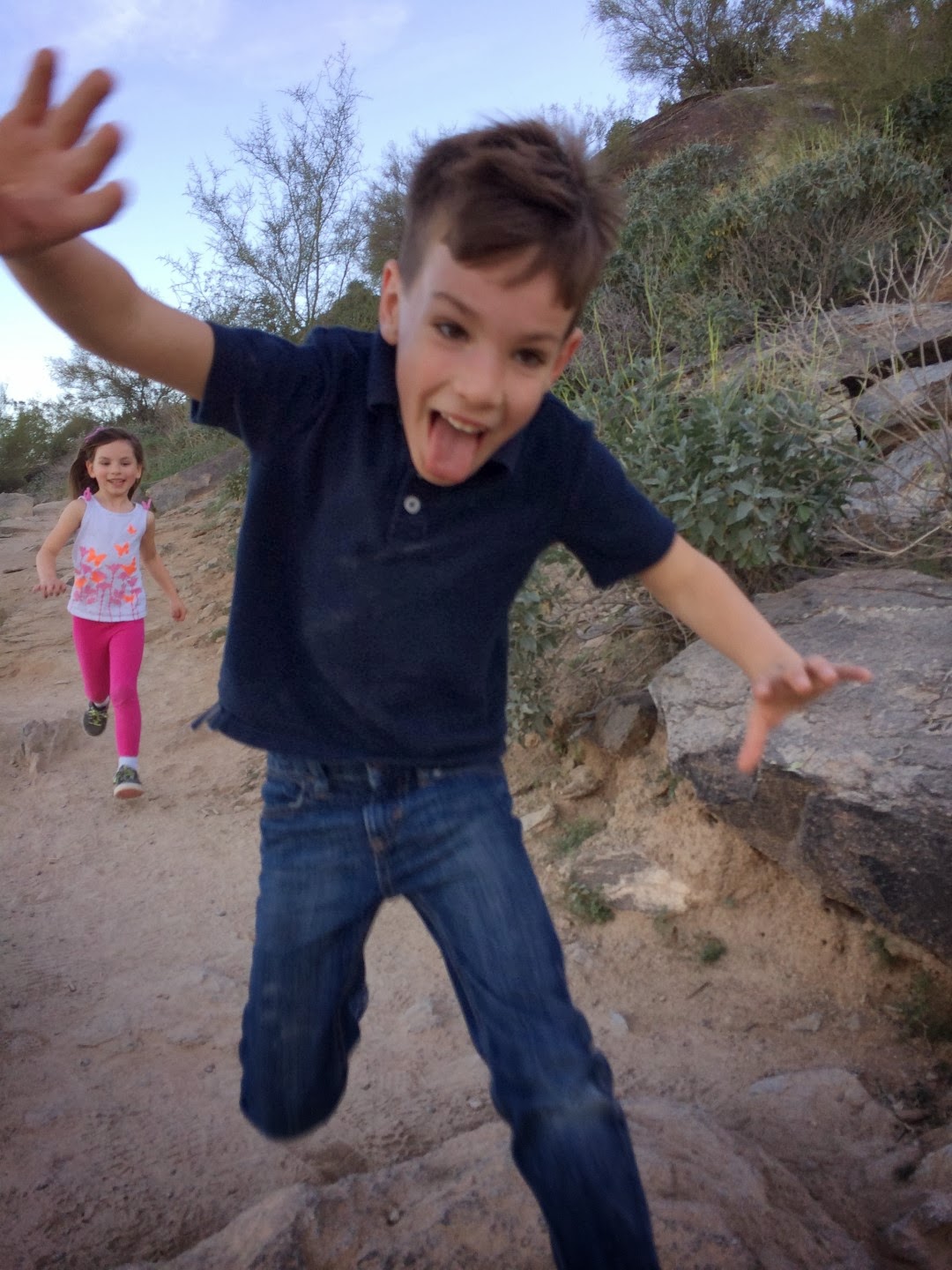 The three of us stopped to look at Easton's picture and we howled with laughter.  Not just a little "ha".  i mean the three of us were doubled over with cackling laughter.  that was one of those moments we will probably never forget.  The simplest things are fun if the right people are experiencing it together.

Kendra was still recovering from a brief fight with sickness on Saturday morning so I took princess Layla to her soccer game while leaving Big Time at home with Mommy.  This was Layla's second game on the girl's league and my first to attend.  She offered to sit out for the first rotation of teammates.  She sat on my lap and said, "can I take pictures with your camera?"

Sure thing!  why not?  She snapped several pics.  We analyzed each on by allowing her to share what she likes about the picture as well as what I see she did well (lighting, subjects, camera stillness, etc.) 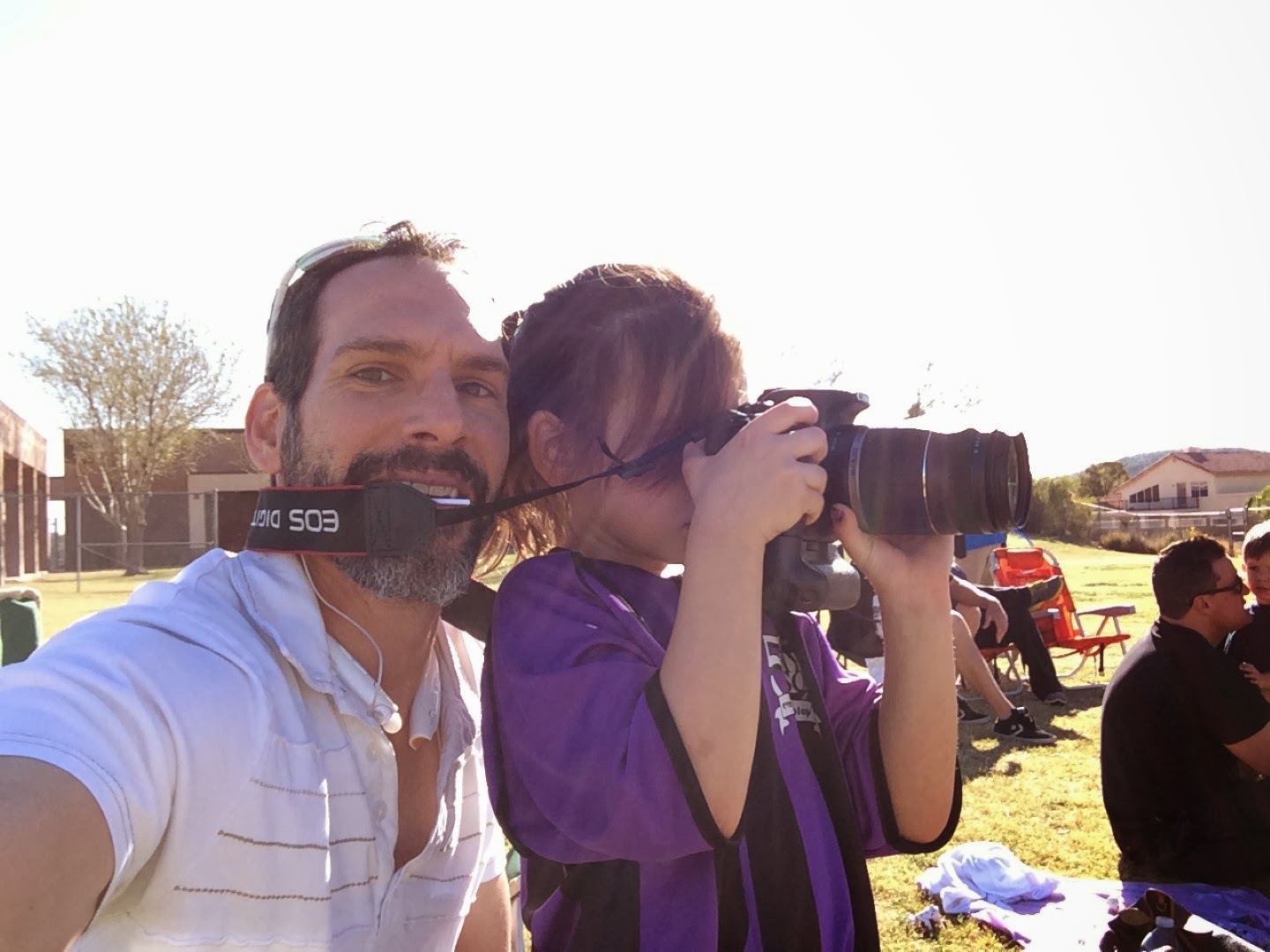 I used my phone camera to take that picture of us.  She has such an eye for beauty it is extraordinary to watch her work.  She got the call from the coach to go play and off she went.  Two minutes later she scored a goal (1 of 2 in the whole game).  This is her "hooray" look after she scored. 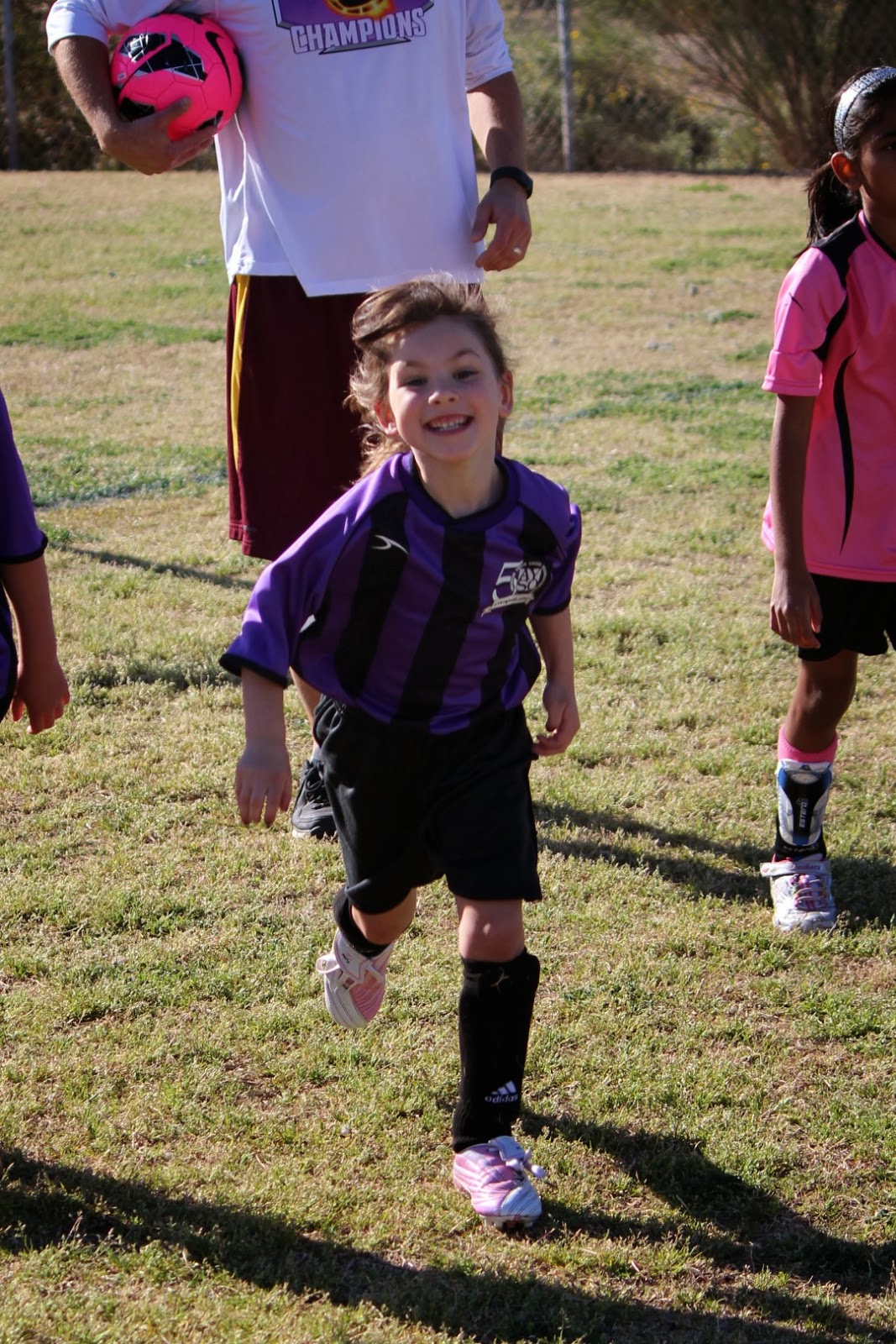 During half-time the girls gathered around a little boy's toy box that contain 101 Dalmatian figurines.  The coach lost his will to compete with such cuteness after his attempt to give a pep talk was completely ignored. 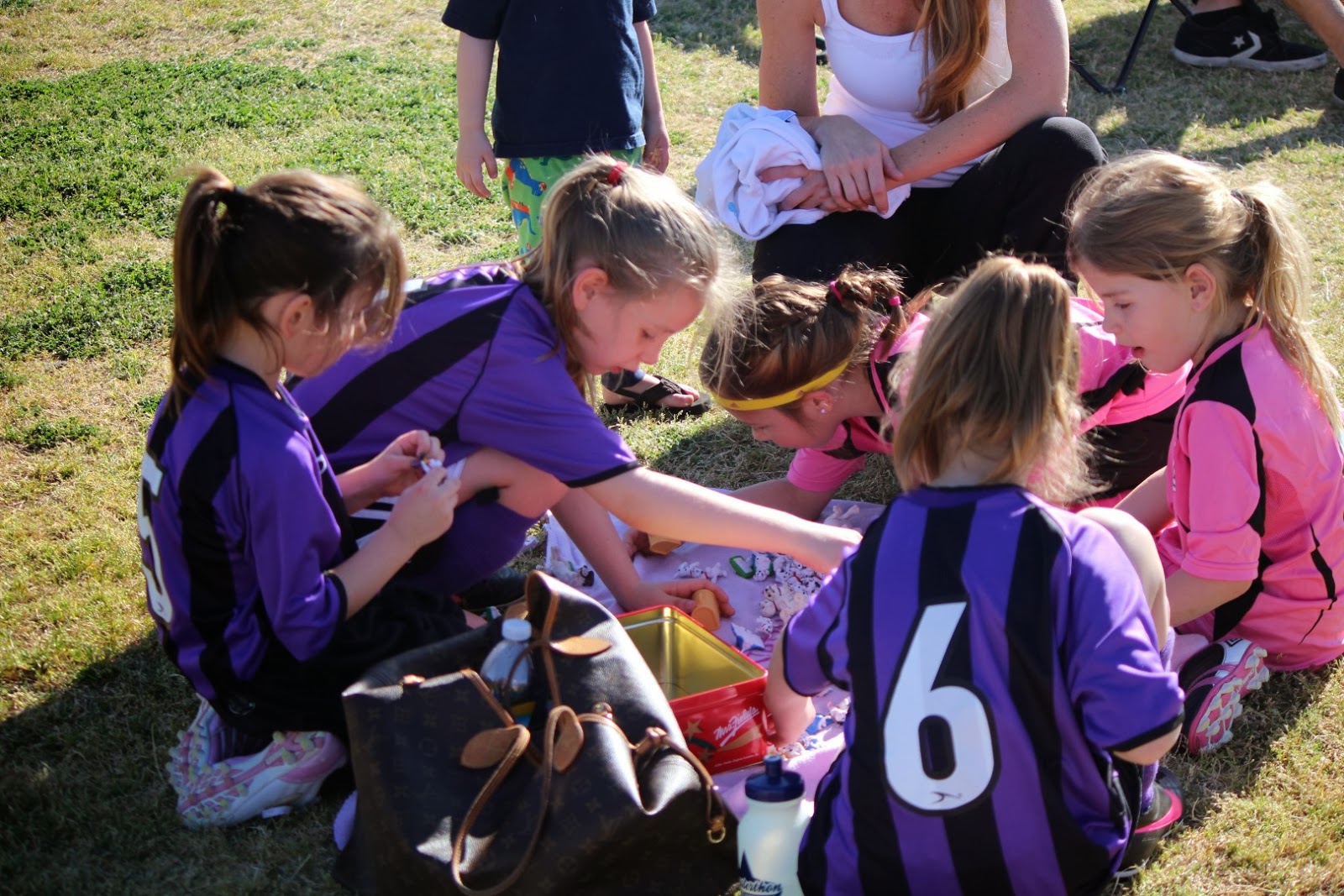 After a quick blow of the whistle signaled the second half to begin, Layla was back to it with vigor. She stopped a few shots on her goal and convinced her team to stand squarely in front of the goal, which is totally illegal, but they did it anyway. 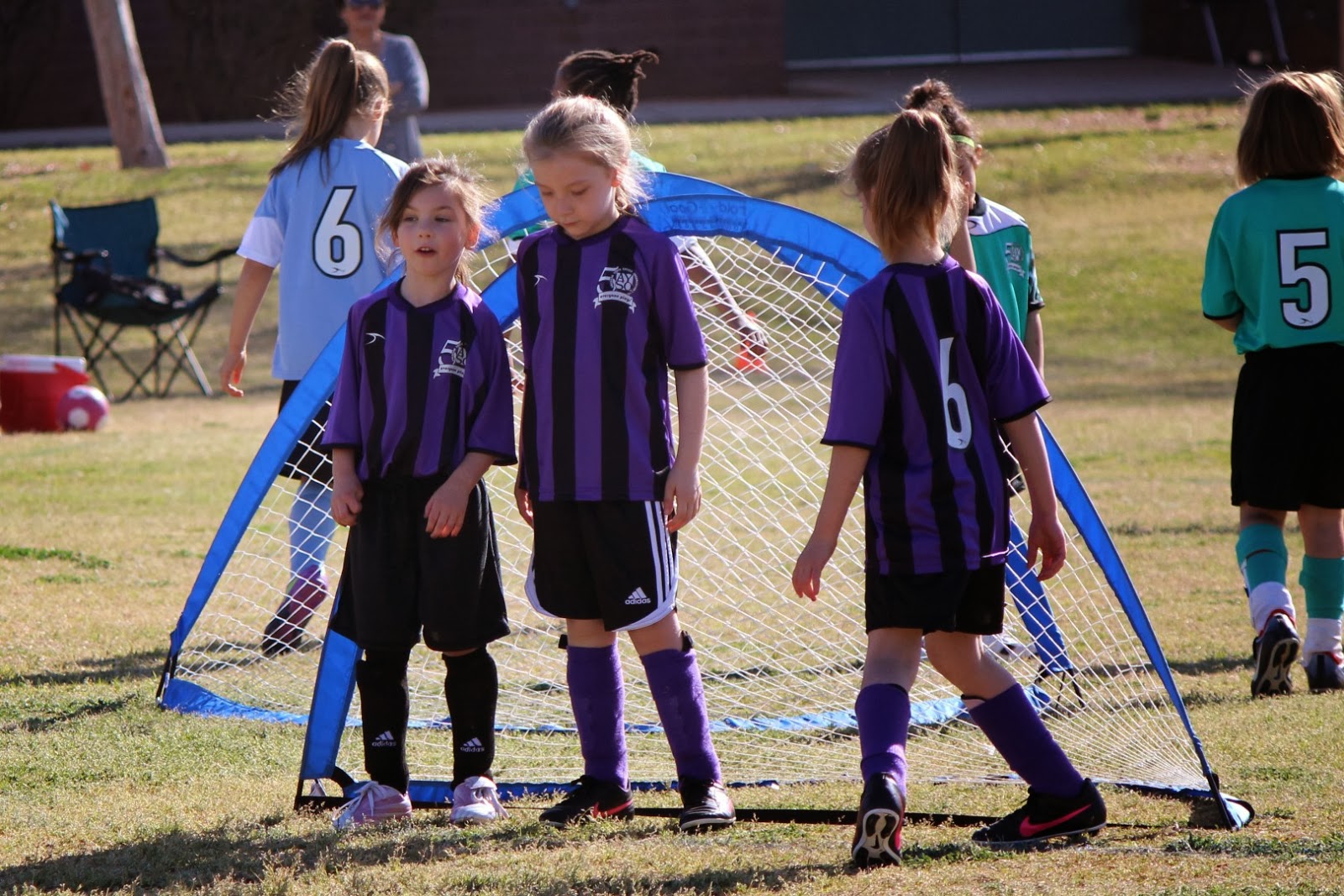 She is doing very well in the girls league because it is such a gentle, slow-paced event compared to the rough and tumble games of the boy's league from last year.  She has no problem stealing the ball from opponents and driving it down field with speed. 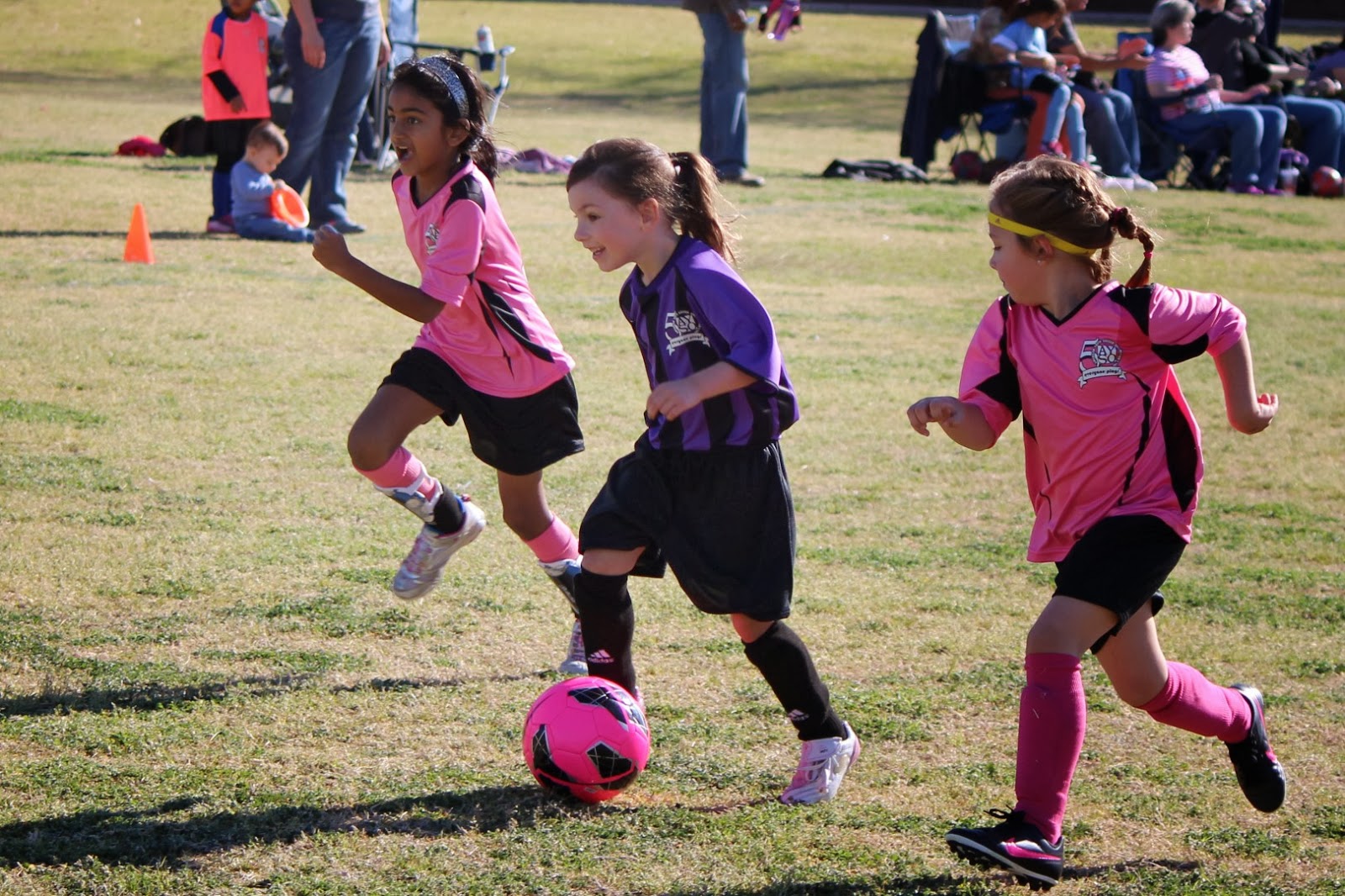 I was impressed with her strength and toughness because of the improvements even since just last season. 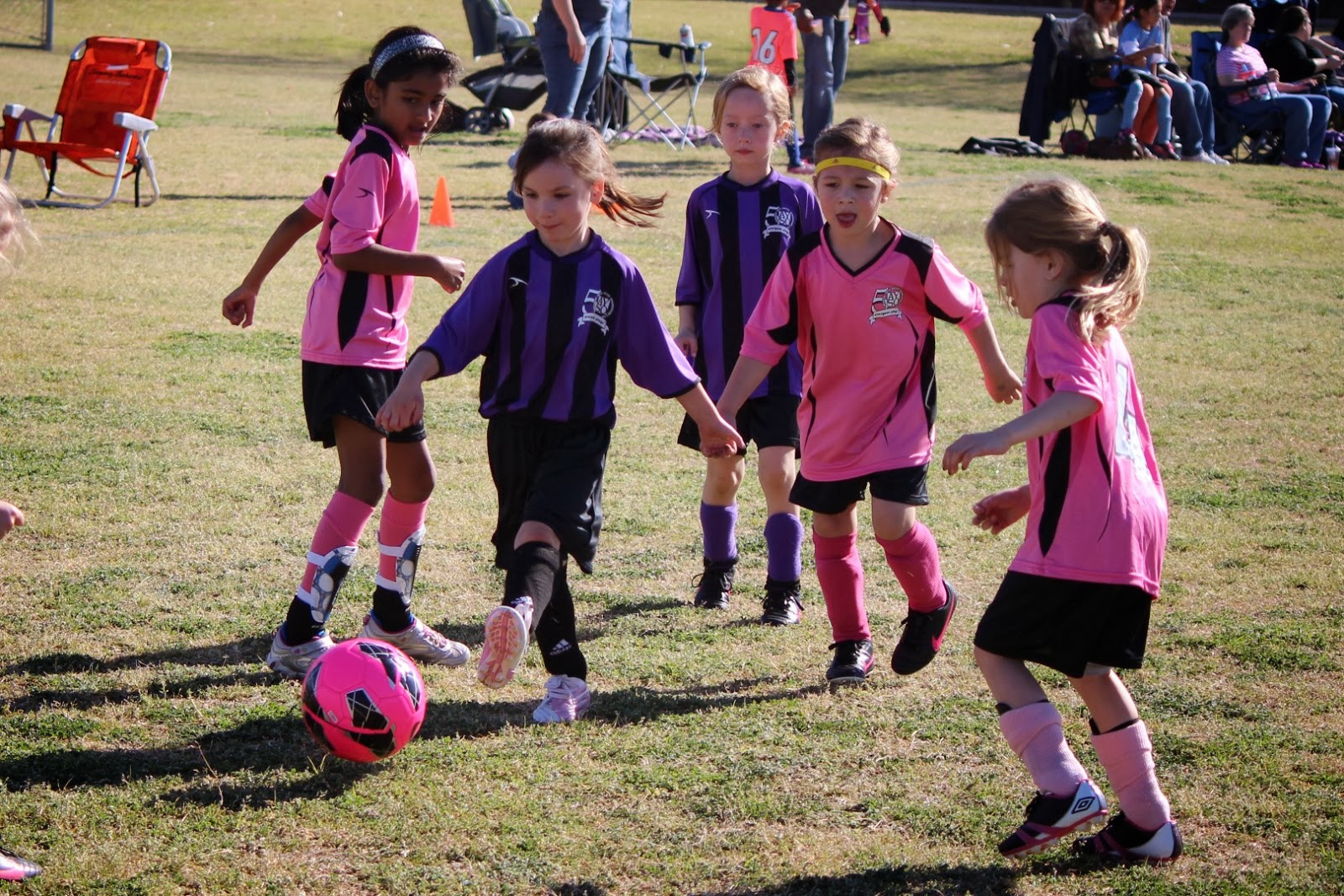 afterwards we stopped by Jamba Juice for a healthy kale-infused smoothie.  She still loves to spend time with just the two of us hanging out talking.  I'm going to keep this way of interacting functioning as long as possible. 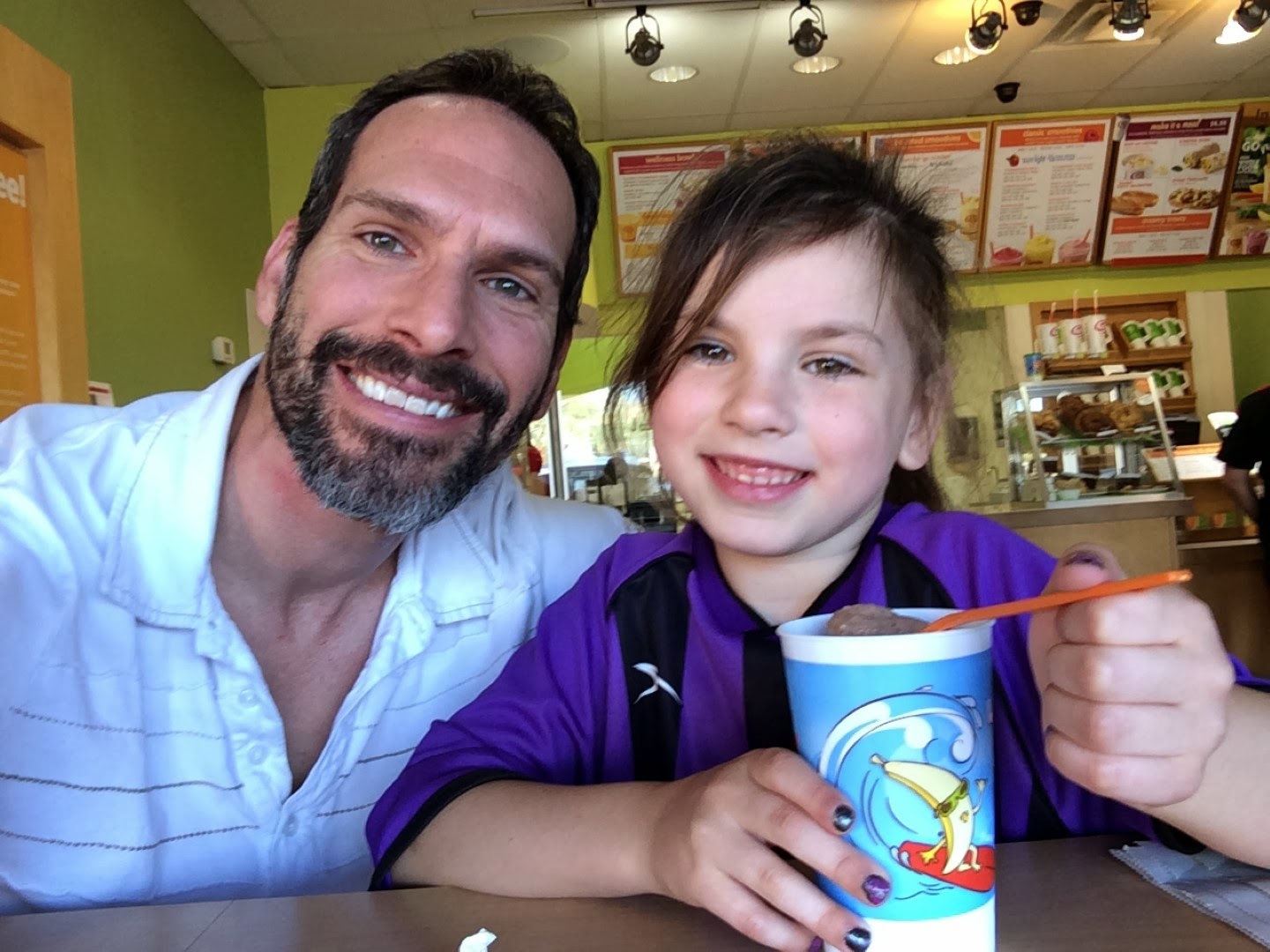 we're counting down the days for Ouma's arrival and begging her to come sooner so we can focus on the tasks at hand while not having to worry about where the twins are or whether they are being taken care of.  Can't hurt to ask...

Wish I were there to play Skipbo with you all. That Layla looks to be a great soccer player. Is she still taking ice skating lessons? Did she see skating from the Olympics? Miss ya. Love ya gobs. MOM