Down on the Farm

Layla is back in soccer this season, but instead of being one of only 2 girls in a boys league, she is one of many girls in her girls only league.  The purple jersey is right up her ally.  I asked if she liked this team better than last year's.  Her emphatic "yes!" suggests she is going to enjoy this season of the girl's team even more than last year. 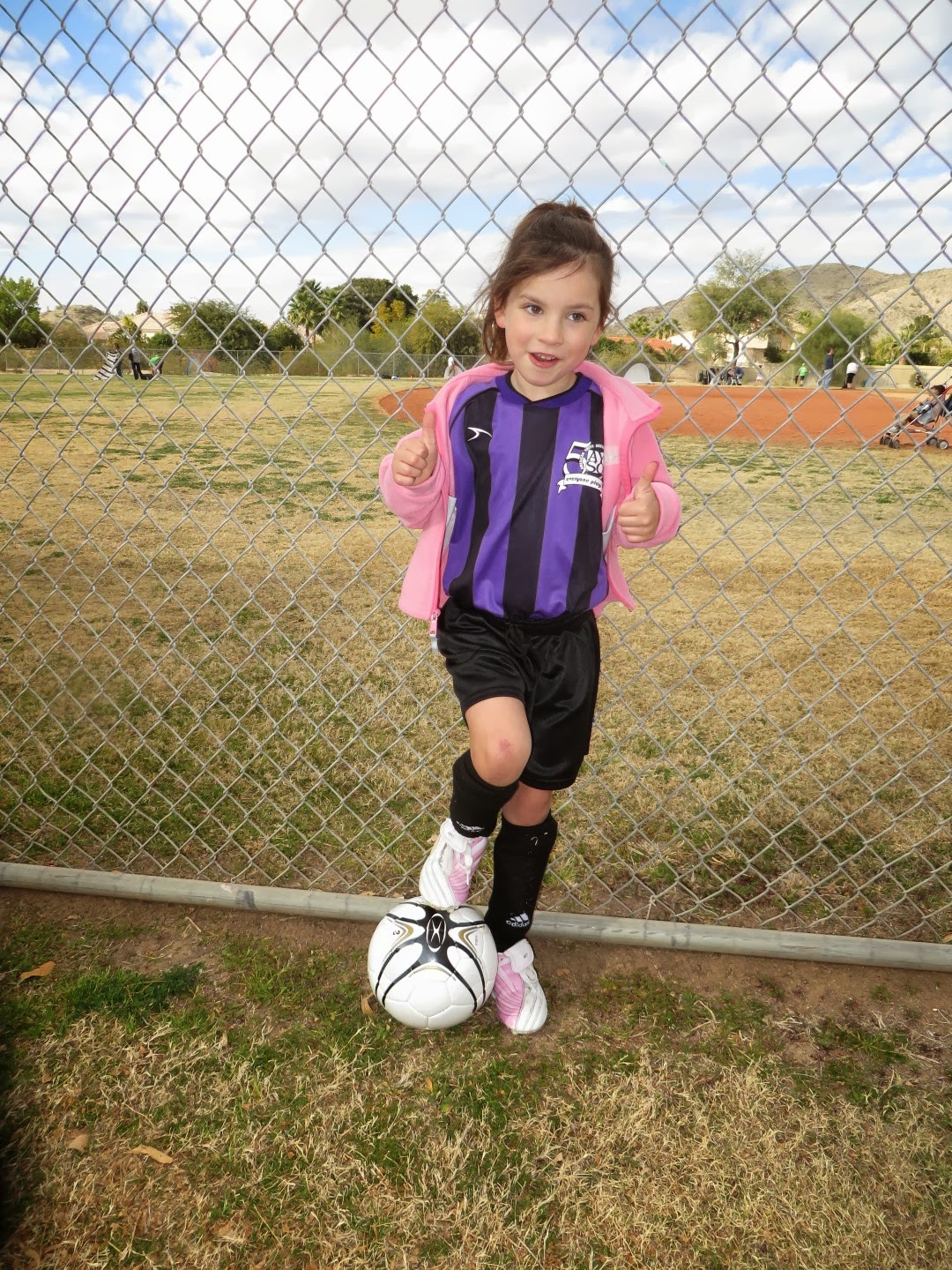 The 4 Webbs took a drive South East for about 40 minutes to attend a "day at the farm" event held by some friends of ours.  The twins harassed every animal on the premises including this soft, friendly bunny. 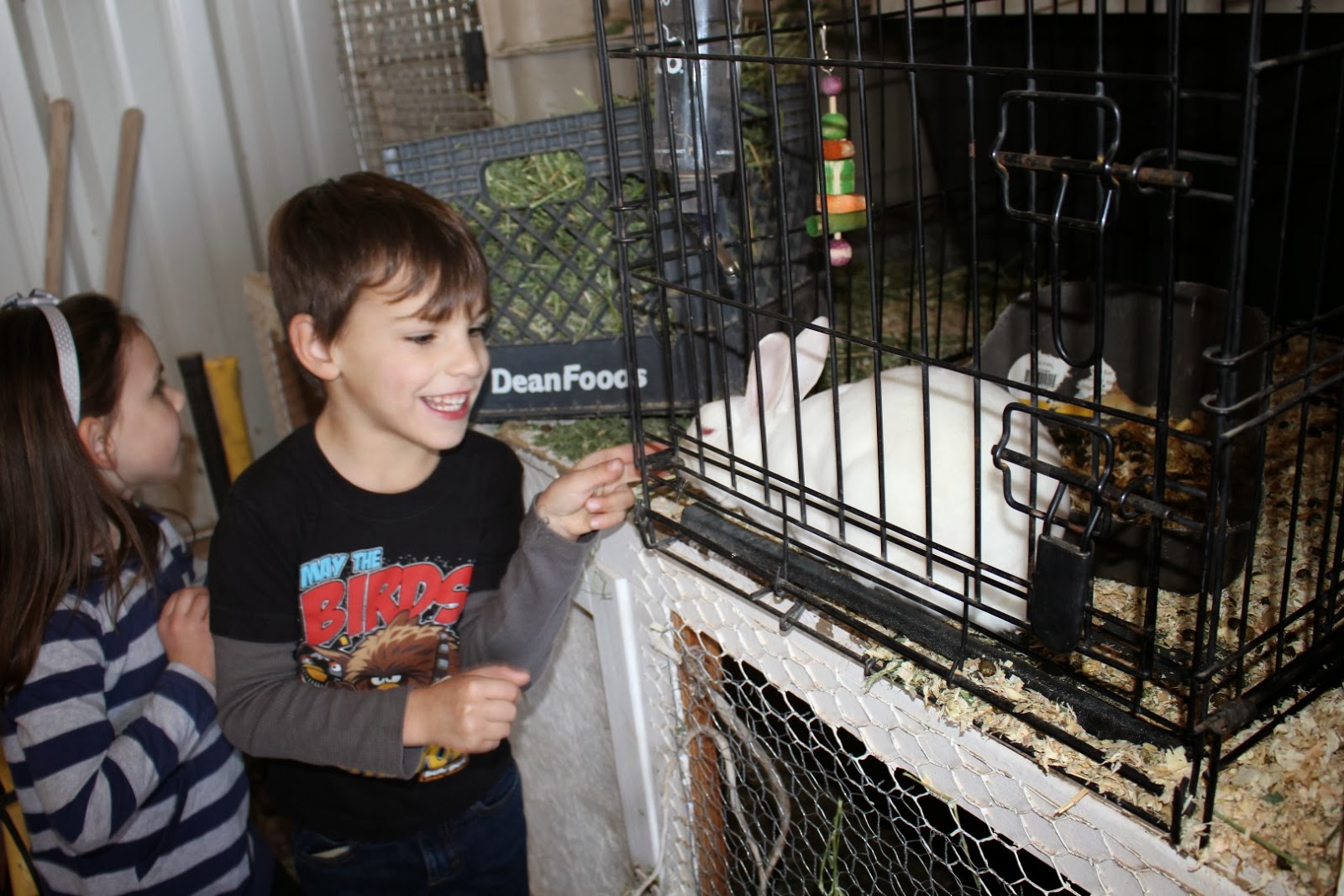 A flashback of Monty Python led to momentary concern about the harmless little bunny attacking my kids.  No fingers were lost or drops of blood.  They both held fat chickens too.  Luckily, the friendly kind that don't mind being picked up and cuddled like a teddy bear.

We ramped up the risk tolerance for a few hours.  Riding on a 4-wheeler is not high on my to-do list for the twins, but we let them do it...  without helmets.  kids having fun and taking a little risk is more highly valued in the Webb house than it was just a few short months ago. 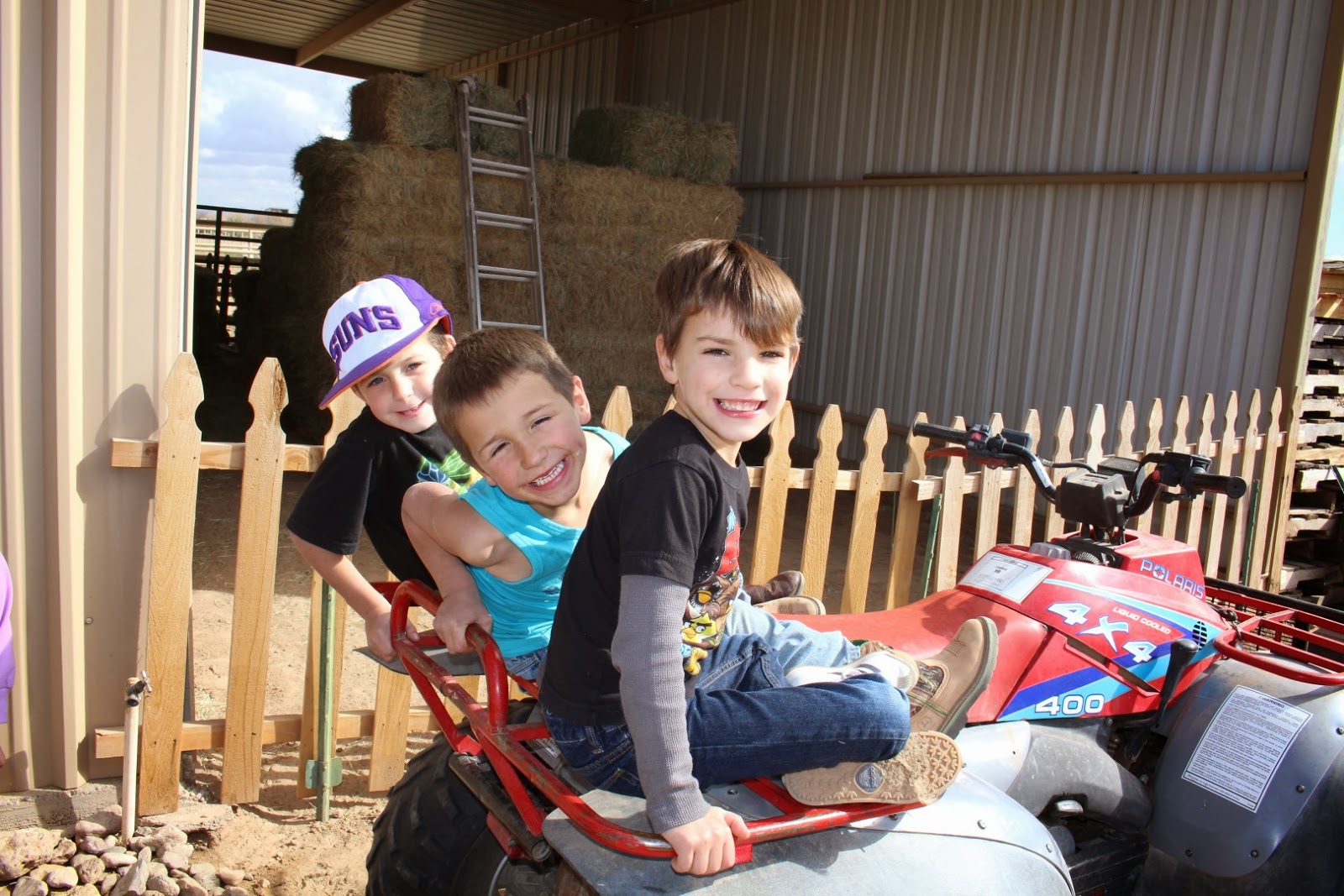 The only reason I even considered this was because I trust the driver and owner of the ranch.  He loaded up a whole trailer full of kids and went plowing off into the dirt fields. 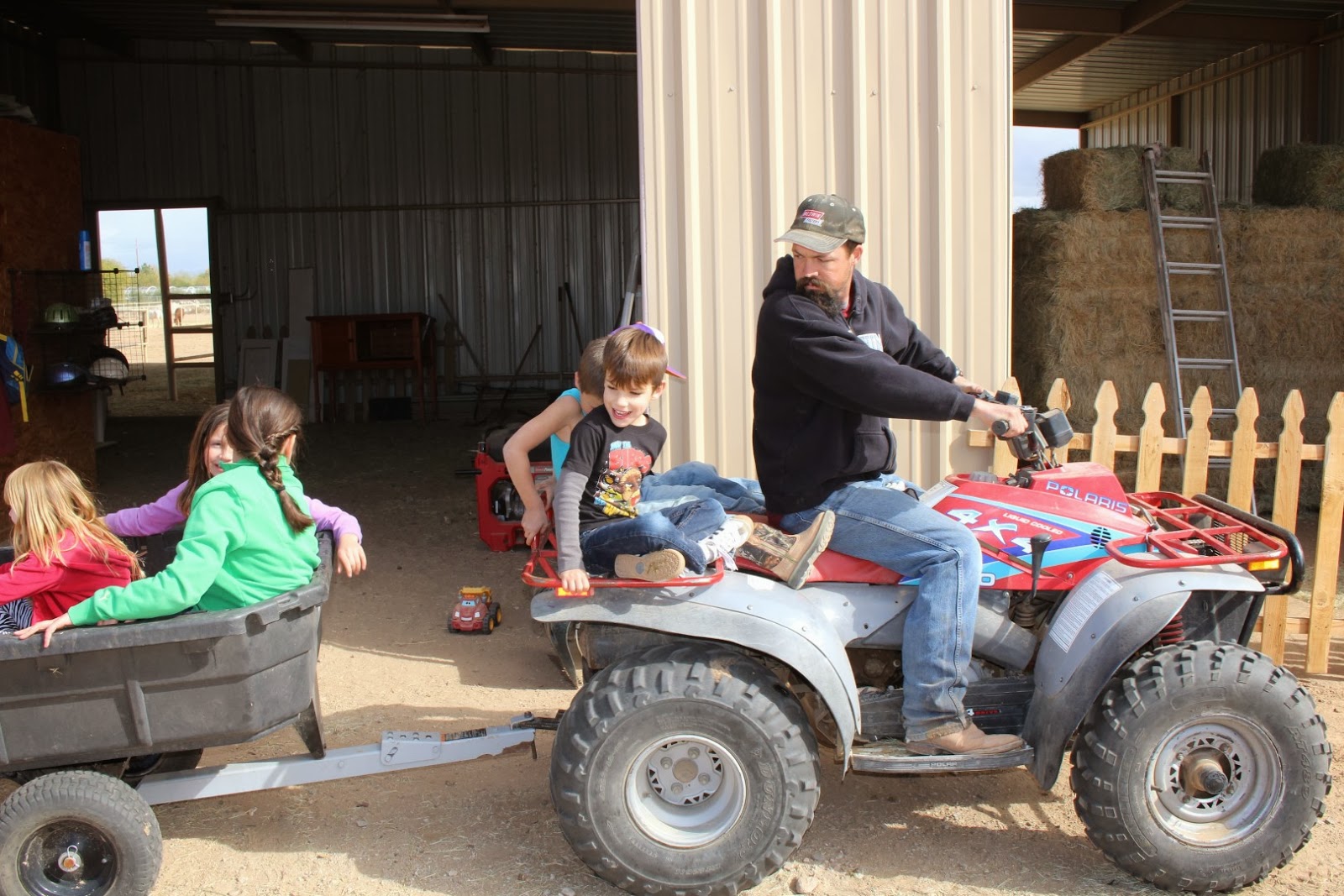 Climb over a fence?  why not.  He's getting to be a big boy.  I gotta let go some time and allow him to make choices and suffer consequences as well as make choices and boost his confidence. 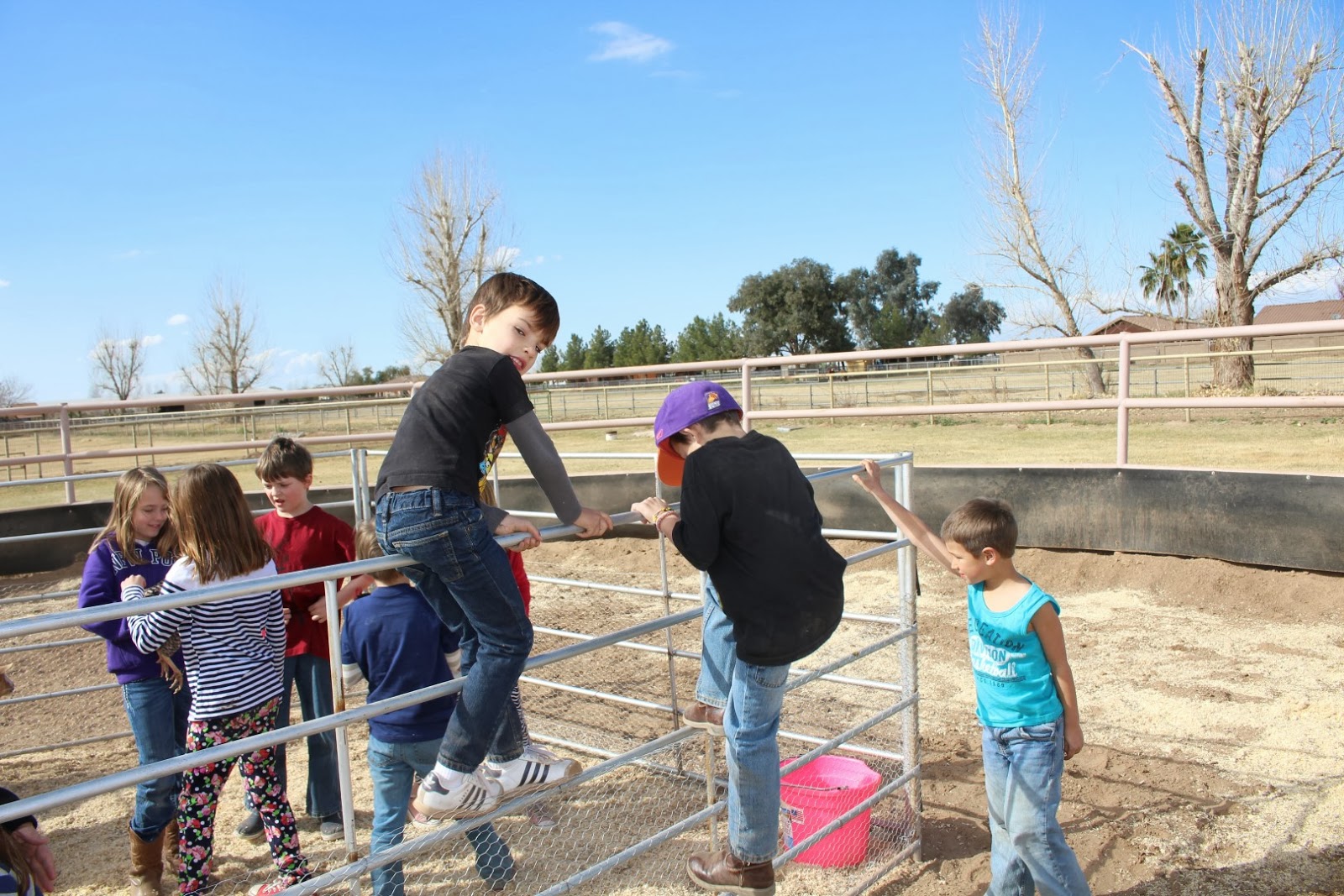 I'm doing my best to be a father to the twins in the same way God is a father.  He gives us free will to make our own choices.  He doesn't stop us from making bad choices.  He doesn't force us to make good choices. But when we choose, we are not free to choose the consequences of the choices we make.  the law of sowing and reaping is in full effect whether we attribute it to God or not.

Layla loved on the goat so much that it began to eat her shirt.  literally eat her shirt.  We don't have many opportunities to leave an event with bite marks in their clothing. 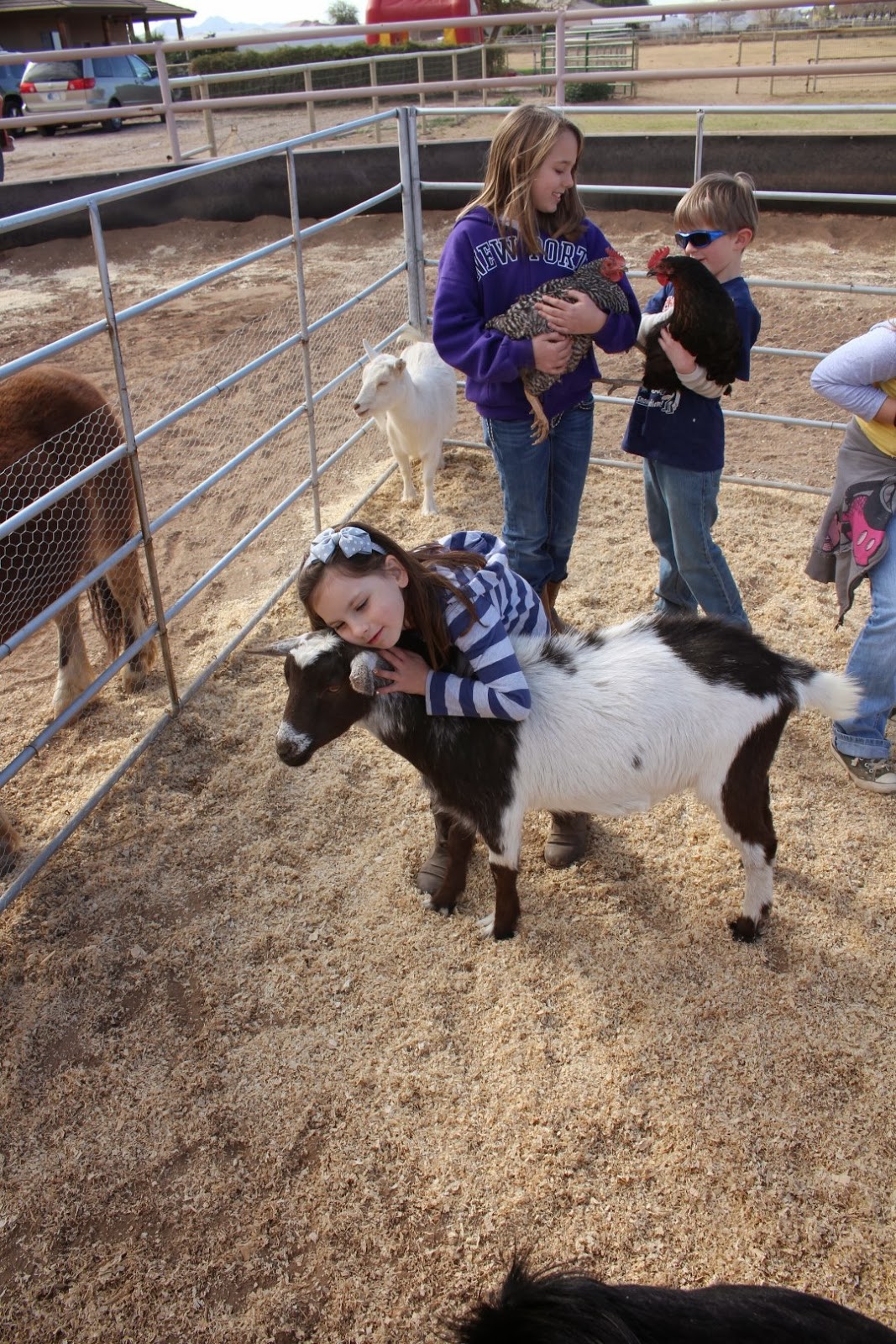 Layla brushed a little pony and for a brief moment she wanted one really bad.  Luckily that desire didn't even last through the day.  I was concerned she might jump on that and talk about it for the next 3 years until I get her one, but luckily this will be a farm-only experience. 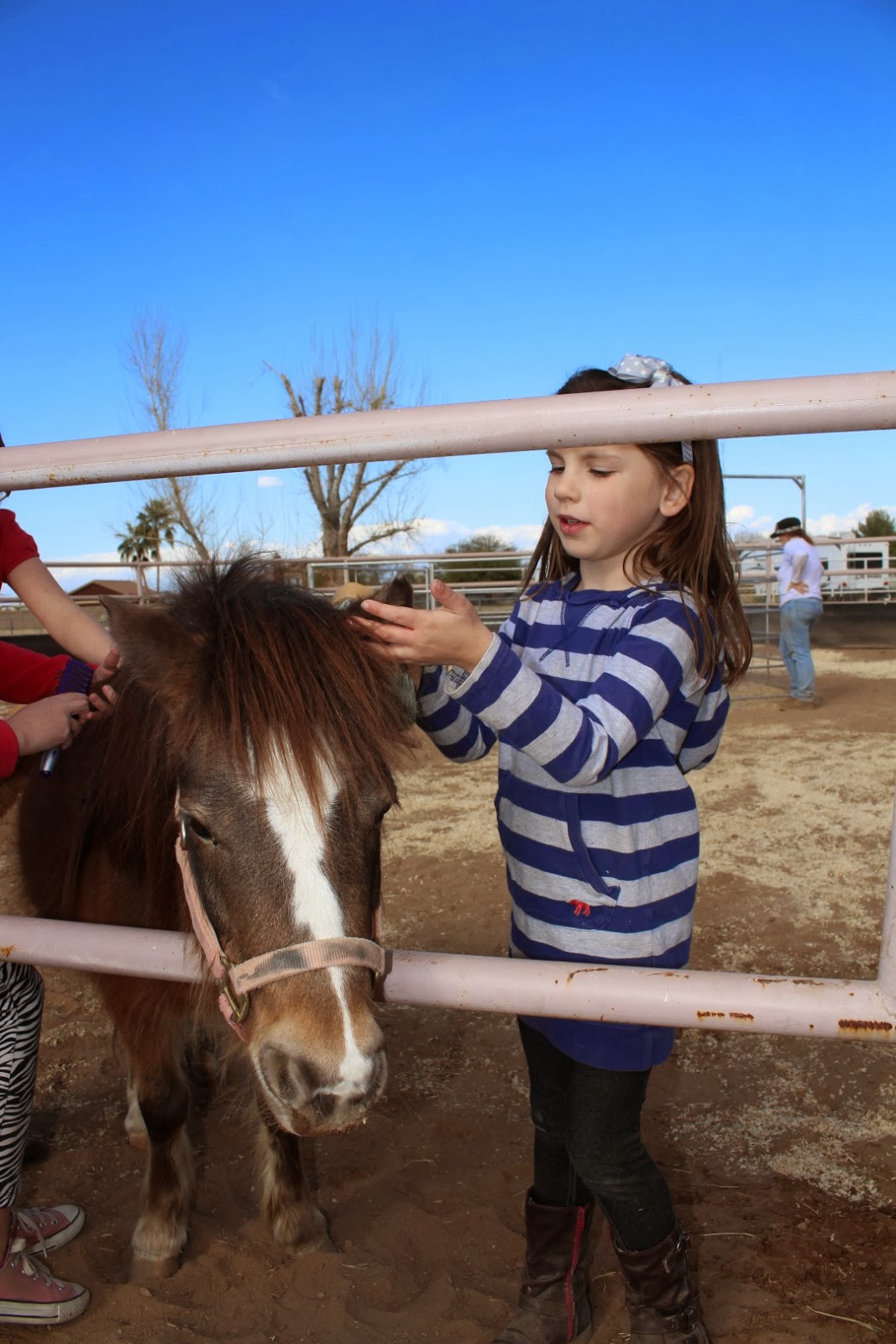 Easton and the other two boys who were his age ended up in the training pasture where they give horse riding lessons.  The kids were around horses, which is dangerous all on its own when they have never been around them during their life.  Even so, I threw caution to the wind and let them alone.  Also, they were flinging dirt everywhere, but I didn't care.  He came home covered in dirt, but sometimes that is the best measure of success for an adventure. 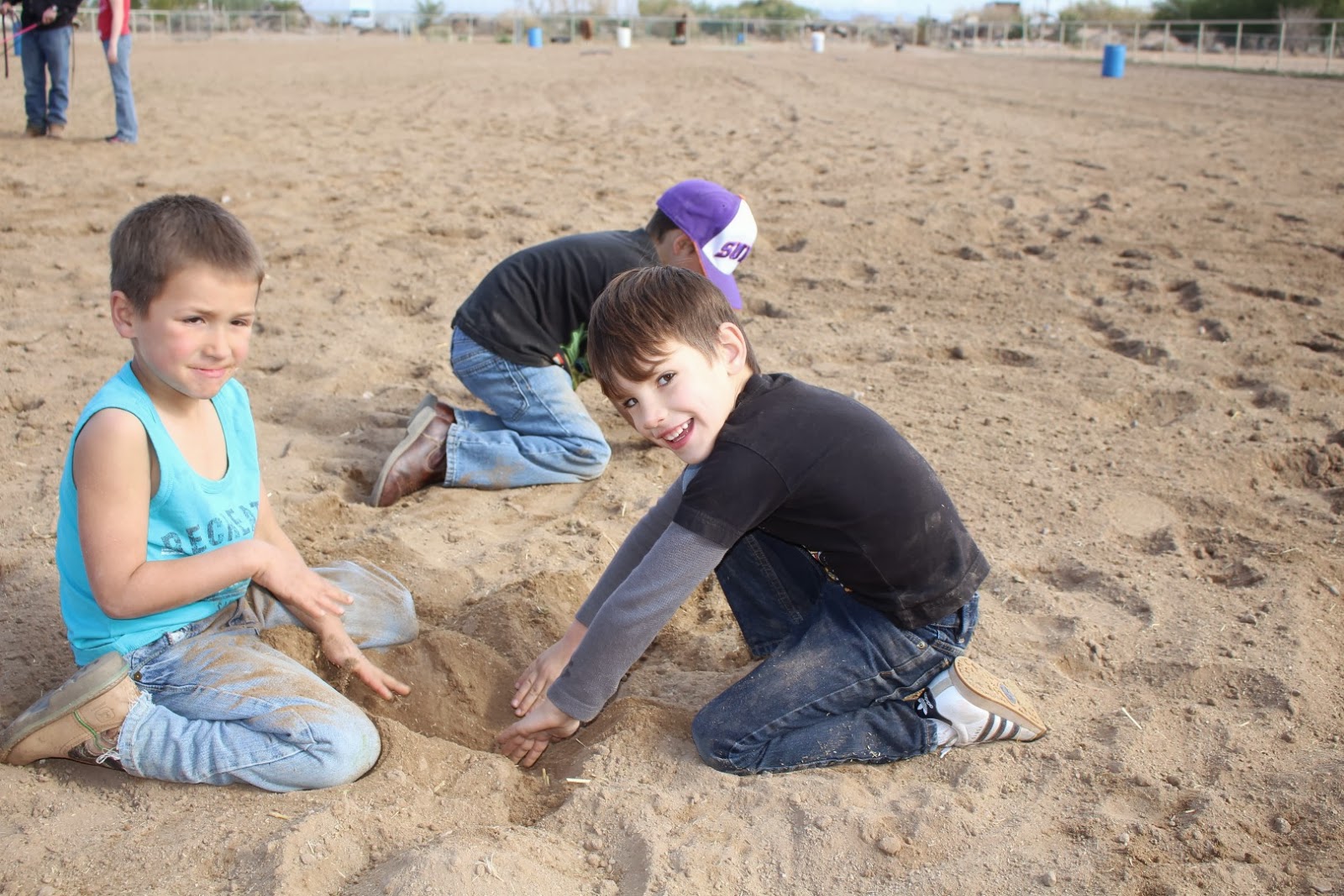 We went straight from the farm back to our suburban life.  A birthday party for a neighbor down the street.  They are known as "the french family" because they are from France, they speak french, their house is decorated like the french, and their names are hard to pronounce.

Great party though.  Their son had a superhero party with the expectation all of the kids would come dressed as superheros. 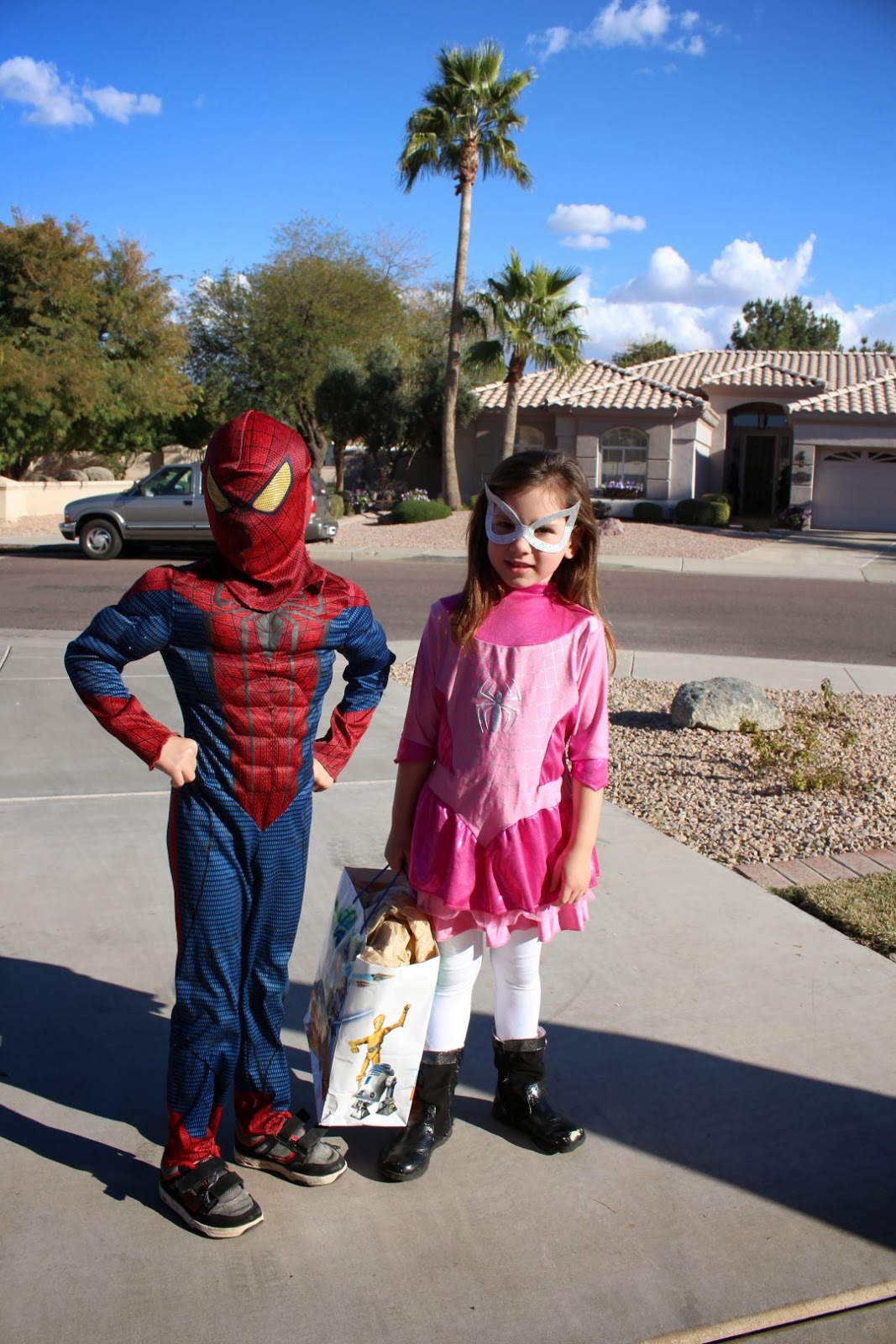 Who is that clinging to the side of the bounce house?  Spiderman, of course. 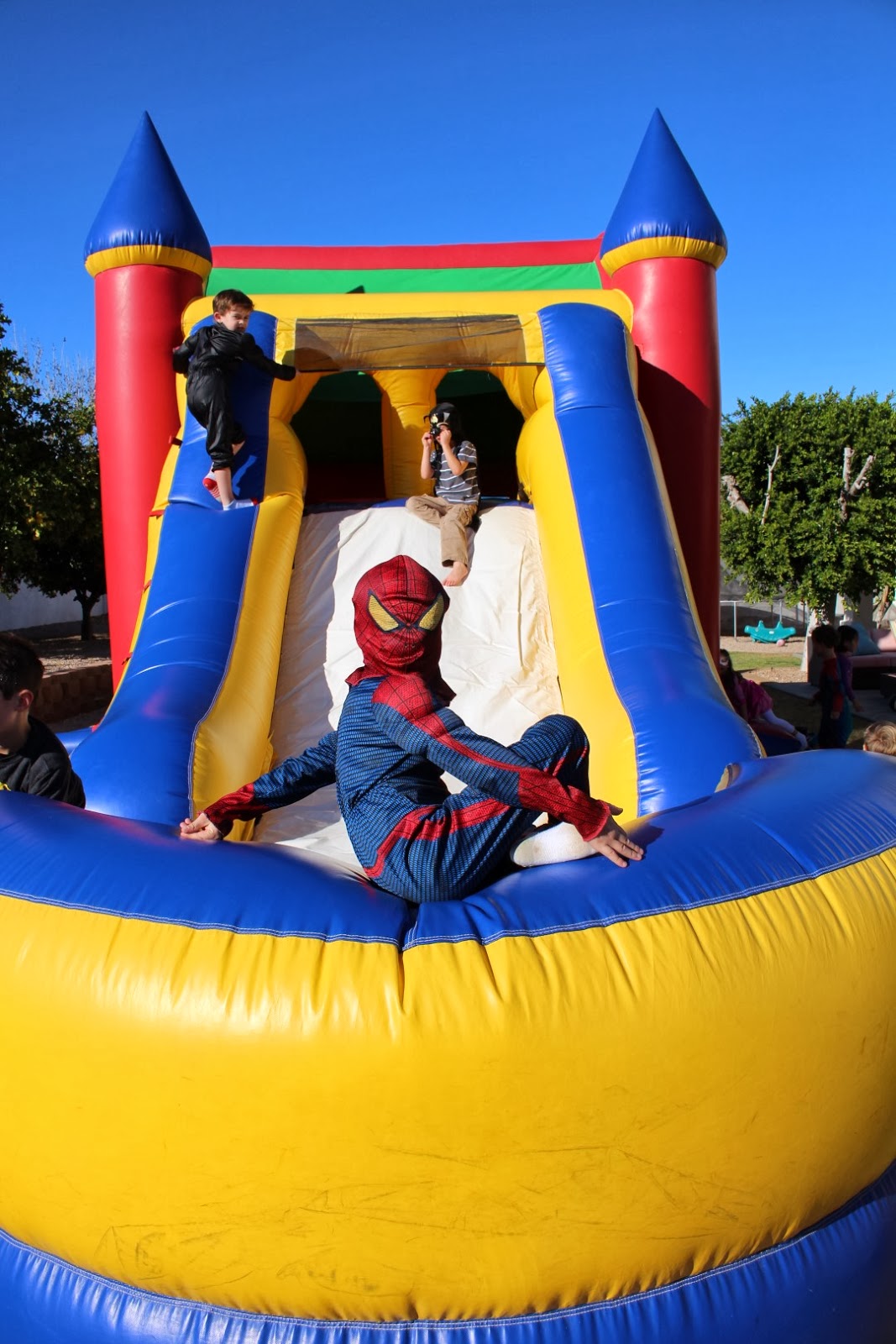 The guest of honor had the black Spiderman costume so Easton and Layla fit right in.  They played chase / tag with a ball and no bones were broken. Easton's ankle took on some damage, but he was fine after a couple of days. 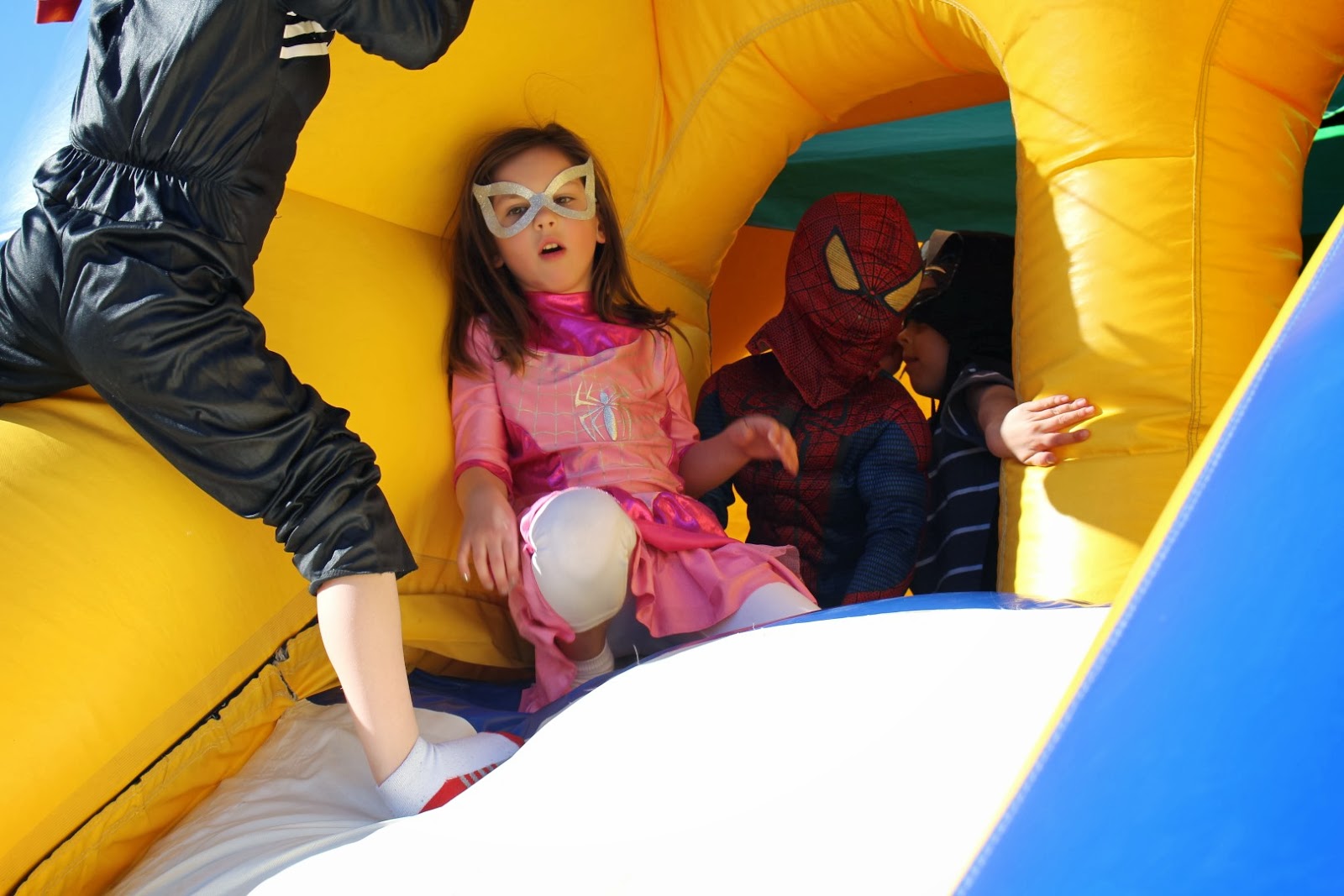 Layla climbed up the side of the bounce house.  I wanted to tell her to get down and not fall because that was a 10 foot drop from the top to the ground. but i didn't. I let her take some risk and find her own success. 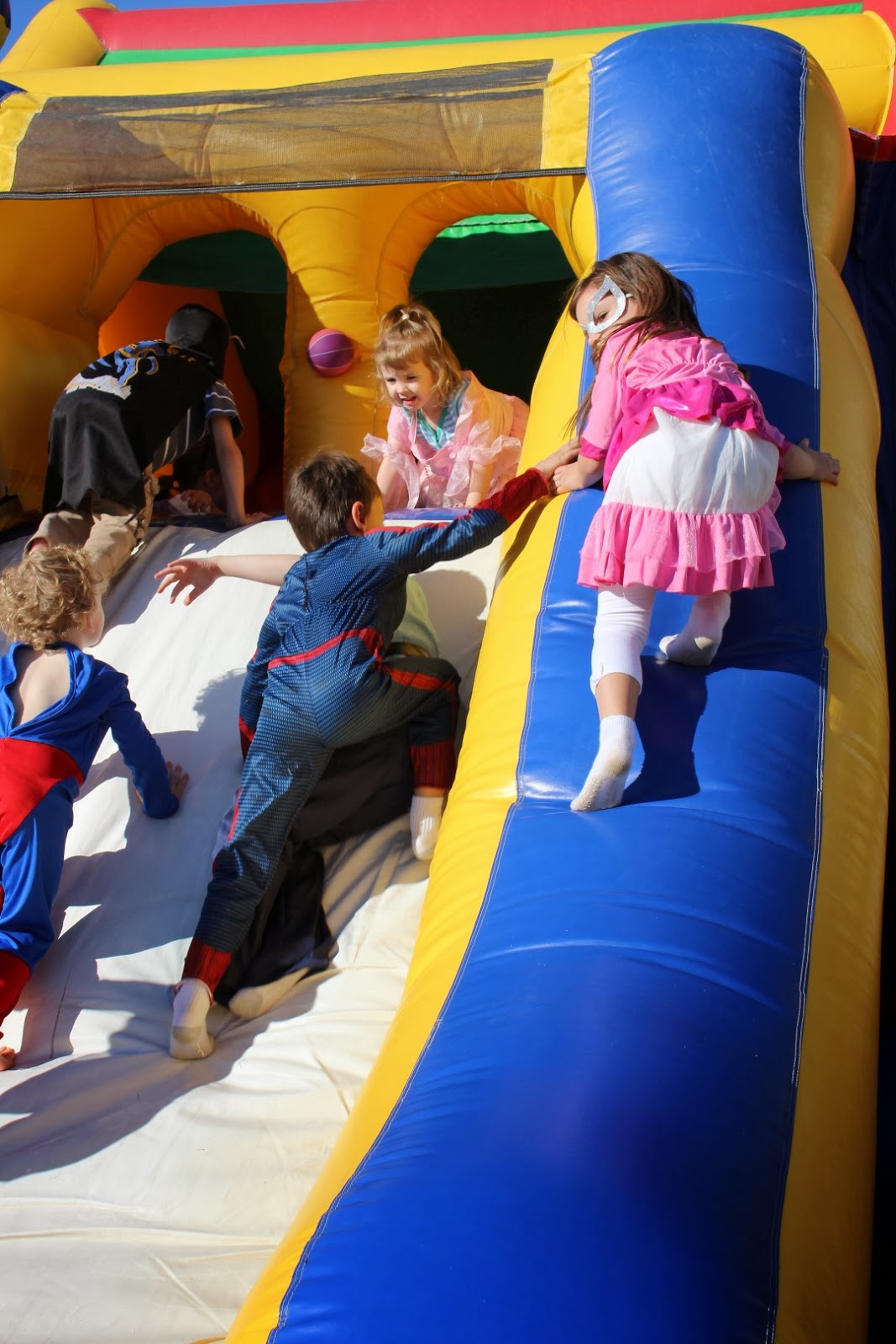 This is the whole crew waiting patiently for the (french version of a) cake to be cut.  Nothing Costco about this cake.  The twins enjoyed the party and the new friends.  We'll look forward to having the French family over for dinner sometime.  We are neighborly and so are they! 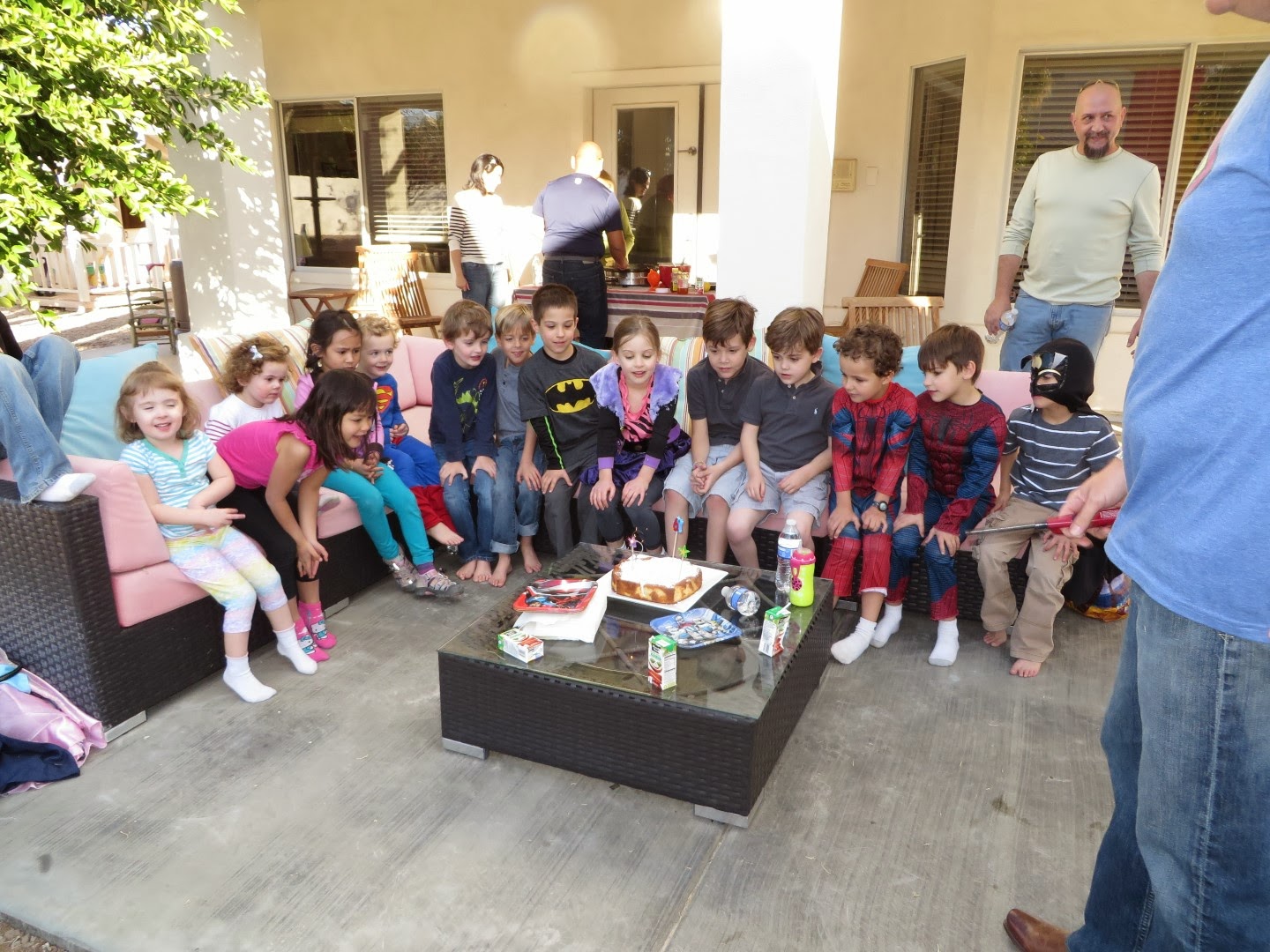 Kendra and I are still up to our neck in book writing, editing, and publishing.  Luckily our friend Tam agreed to help us with the publishing part.  She is saving our bacon.  We owe her big time and can't wait to see the finished product of what we are developing.

The downside of all this extra curricular activity is that Kendra and I haven't spent much time together. We both dislike the distant feeling that happens when we don't take an evening or at least a few hours to just spend time together.  All of our babysitting opportunities are being used to enable our ministry time to help others.  Nothing wrong with that, but I am excited to get my priorities back in line next month.

Like my brother-in-law John says, "You can do anything... for a few months."

Thanks for the stories and pics about the family outings and various exchanges between each other. It sure helps me to feel like I am almost there with you all. I will pray about your special church conference. Please let me know how it all turns out. Remember to BREATHE -- in and out, in and out! ha ha. Love ya gobs, MOM