And now for another edition of adventures with twins, which is written instead of working on 100 other tasks I should be doing.  I recently made the switch from Evernote to NirvanaHQ as my centralized task management software.  NirvanaHQ allows me to follow the GTD (getting things done) methodology in a cloud-based (web site and app) environment.  It's on my iphone, ipad, work laptop, and home desktop.  That means I can add and check-off tasks anytime, anywhere.  It changed my life.  More accurately, it organized my life.   I no longer have occasions where I wake up in cold sweat because I forgot to write down some task I should have done or need to do in the future.  Like most things in life, it only works if you really DO it.  meaning, go all in and dedicate the time necessary to make it work for you.  Some people just try things with a half-hearted attitude, but that doesn't lead to long-lasting success.

Anyway, I had a vacation day from work tacked onto the weekend.  There are literally hundreds of things I could have done with the three day reprieve from work, but I've been waiting for some Daddy time with Easton and Layla.

On Monday we begged the twins to please sleep in. please?  pretty please?  If we leave a snack out will you leave us alone?  Ha!  There is nothing more consistent than Easton's 7:15 AM wake up time.  I should start calling him Big Ben instead of Big Time.

He woke up and Layla woke up because although she would gladly sleep in for hours, it grates on her to think she might miss something Easton is up to.

So we had a late breakfast of Oatmeal followed by devotions.  I usually pull up verses on my phone or read through the devotions book for kids.  Today I pulled out my most prized possession:  Dad's Bible with Mom's notes.  I had to explain to Easton and Layla what the Bible is because their world is so digitized.  They were briefly appalled at the hand-written notes and highlights littering the pages.  I explained the purpose and value of how Mom and Dad used the Bible, which calmed their angst.  We read some verses and discussed what they believe about God.  That's some good breakfast conversation! 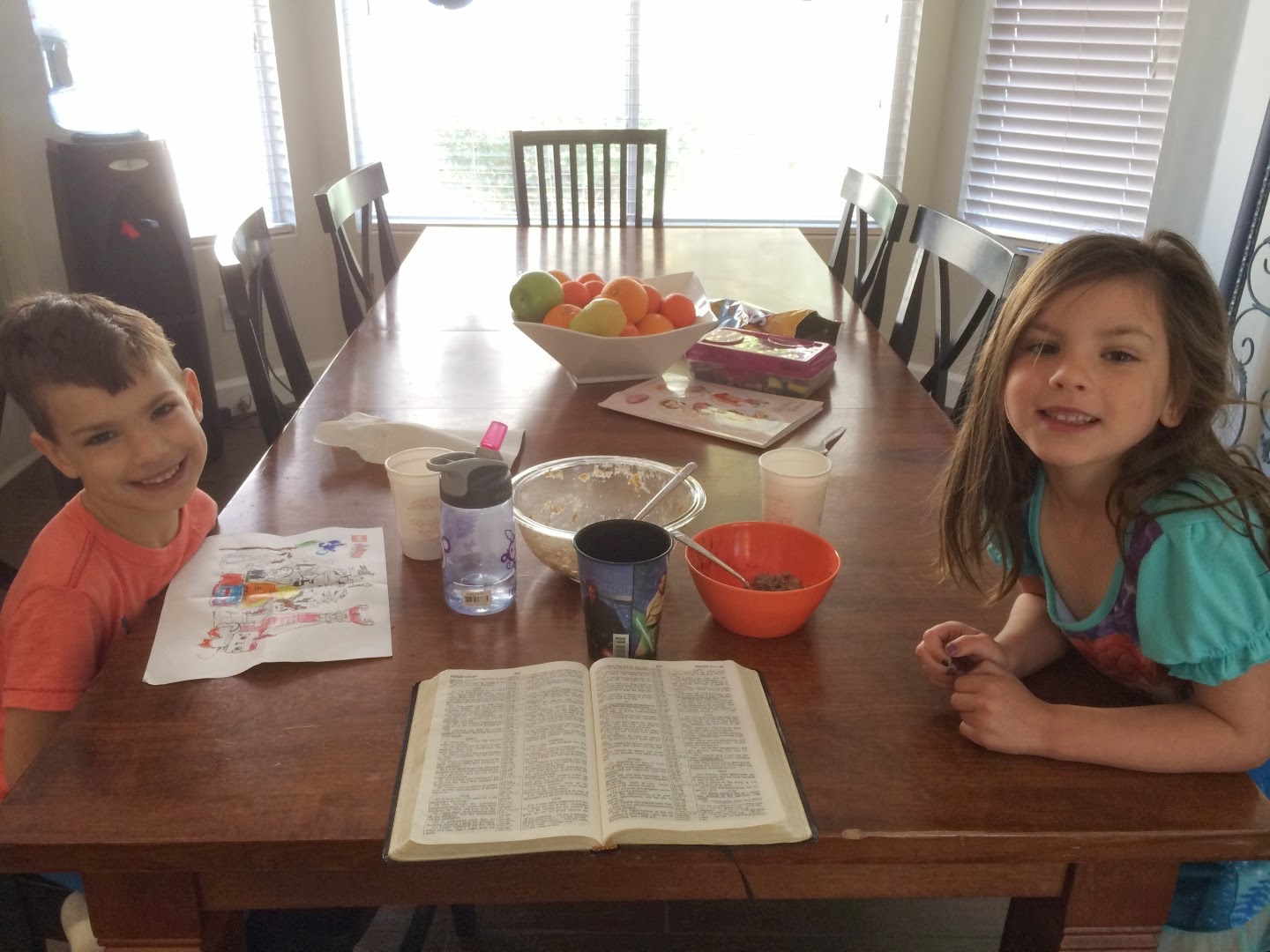 confession time:  I took Easton to see the movie "Gravity" in 3D at the theater.  I know...  it's PG-13 and he's only 6.  Even so, after watching it with my friend a few weeks ago I decided to let him see it with a caveat.  He had to close his eyes and cover his ears on command through two undesirable scenes.  There were a few curse words in it, but Easton didn't even catch what they were saying because he's never heard those words before.  He watched the movie intently and loved it.  for the next two days he talked several times about how awesome it was.

The next day Easton begged me to print him some space shuttle coloring pages.  We searched and printed off four of them.  His expression of pure joy was worth the time and effort to search for exactly what he wanted.  He asked for a picture of the space shuttle with the fuel tank and solid rocket boosters sitting on the launch pad with the launch towers. 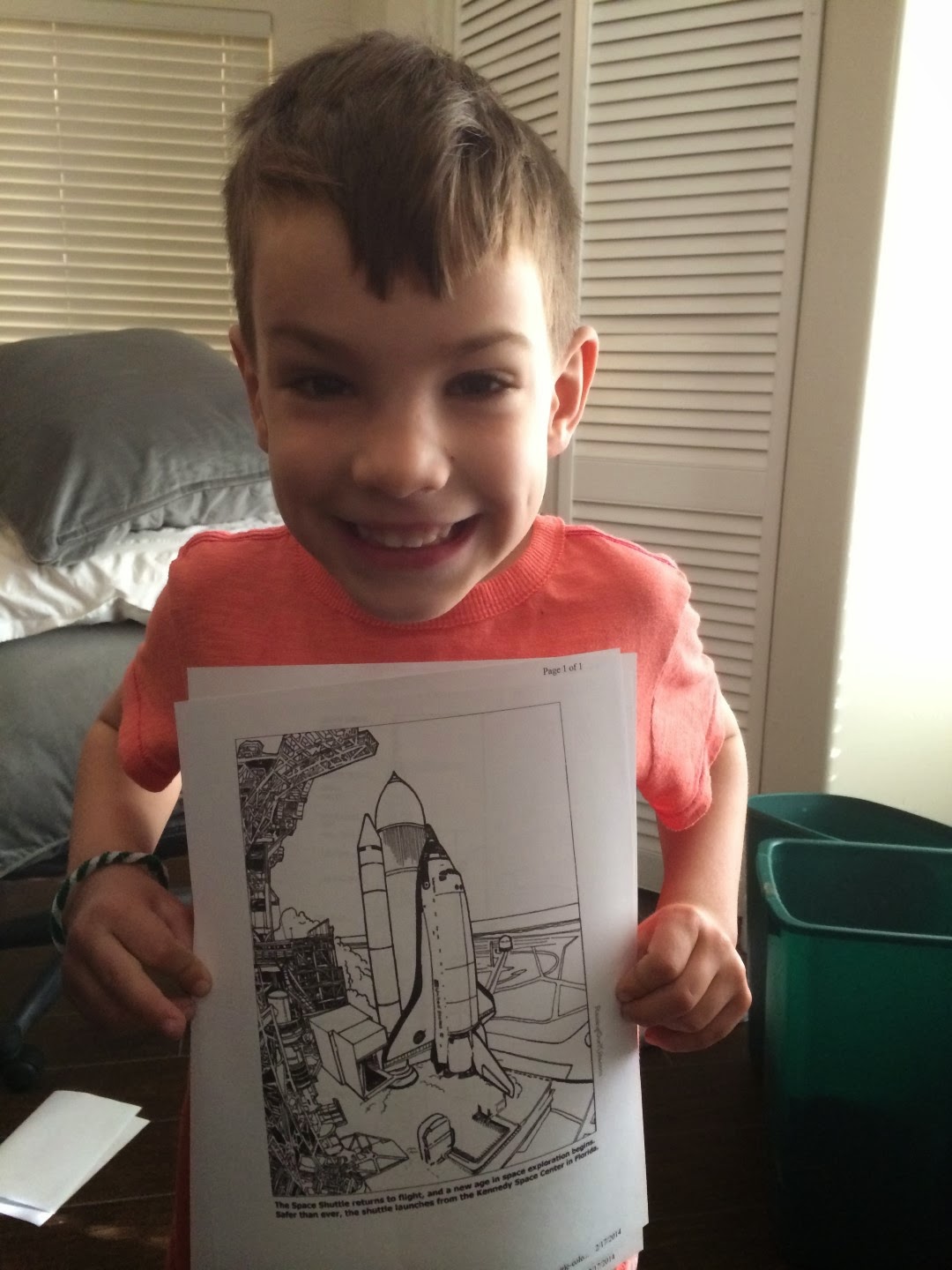 His high level of excitement for the movie and coloring pages was already at a fever pitch before he knew anything about the special trip I had planned.  On Monday the two of us headed up North an hour to the Challenger Space Center.  I discovered this gem a few months ago, then found a Groupon deal for cheap tickets, then I waited.  It is only open from 10am-4pm so we had to wait for a weekday off from school for Easton and work for me.  That day finally came around on President's Day.  We arrived to the unmarked building.  Easton was anticipating what was inside, but had no idea. 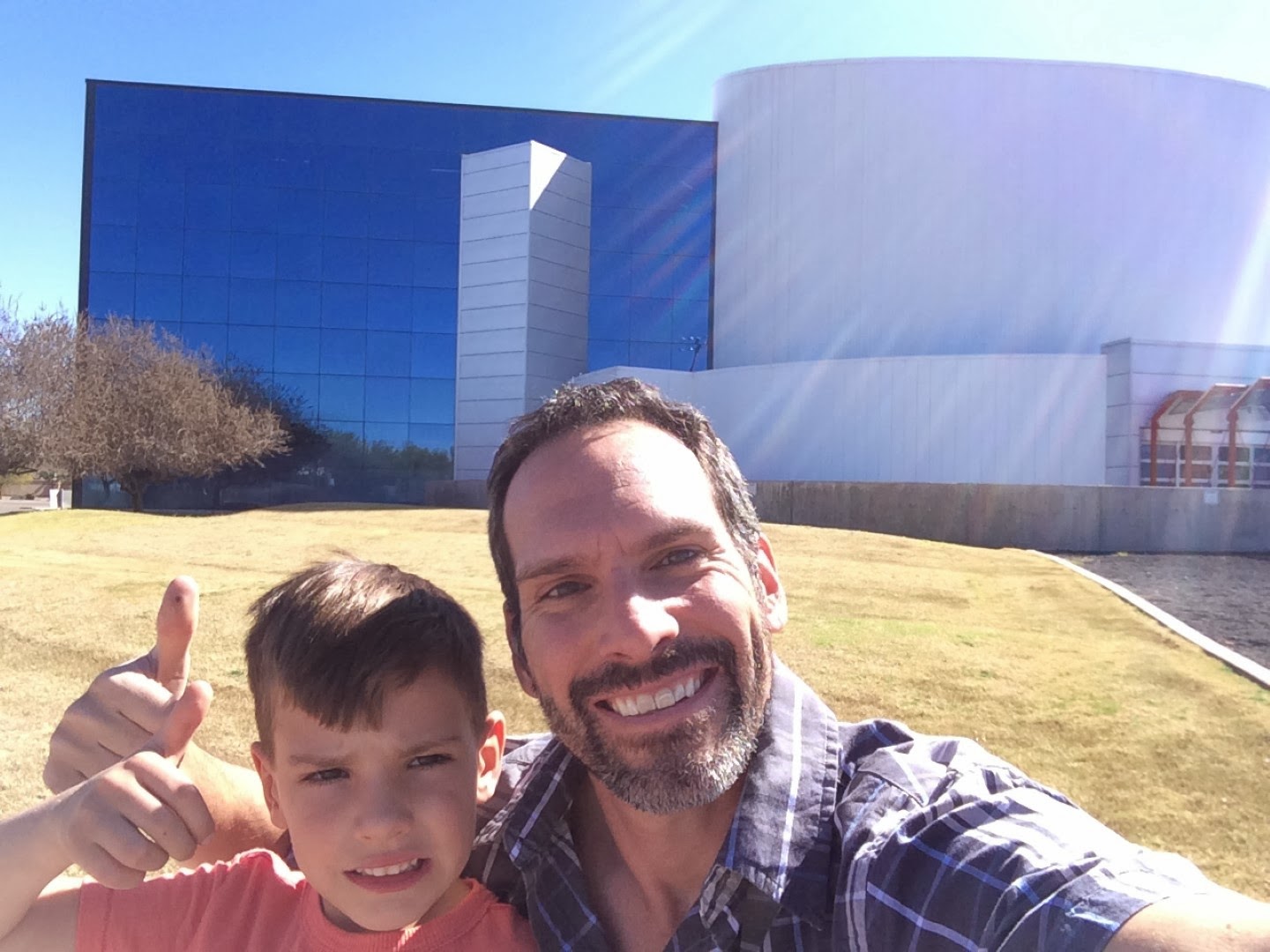 It's a 3-story complex with meteorites, models, pictures, space shuttle paraphernalia, and a mach room of the control center.  Easton was amazed by this mural of the space shuttle made from individual flat-tile 1x1 round Lego pieces.  It was a masterpiece! 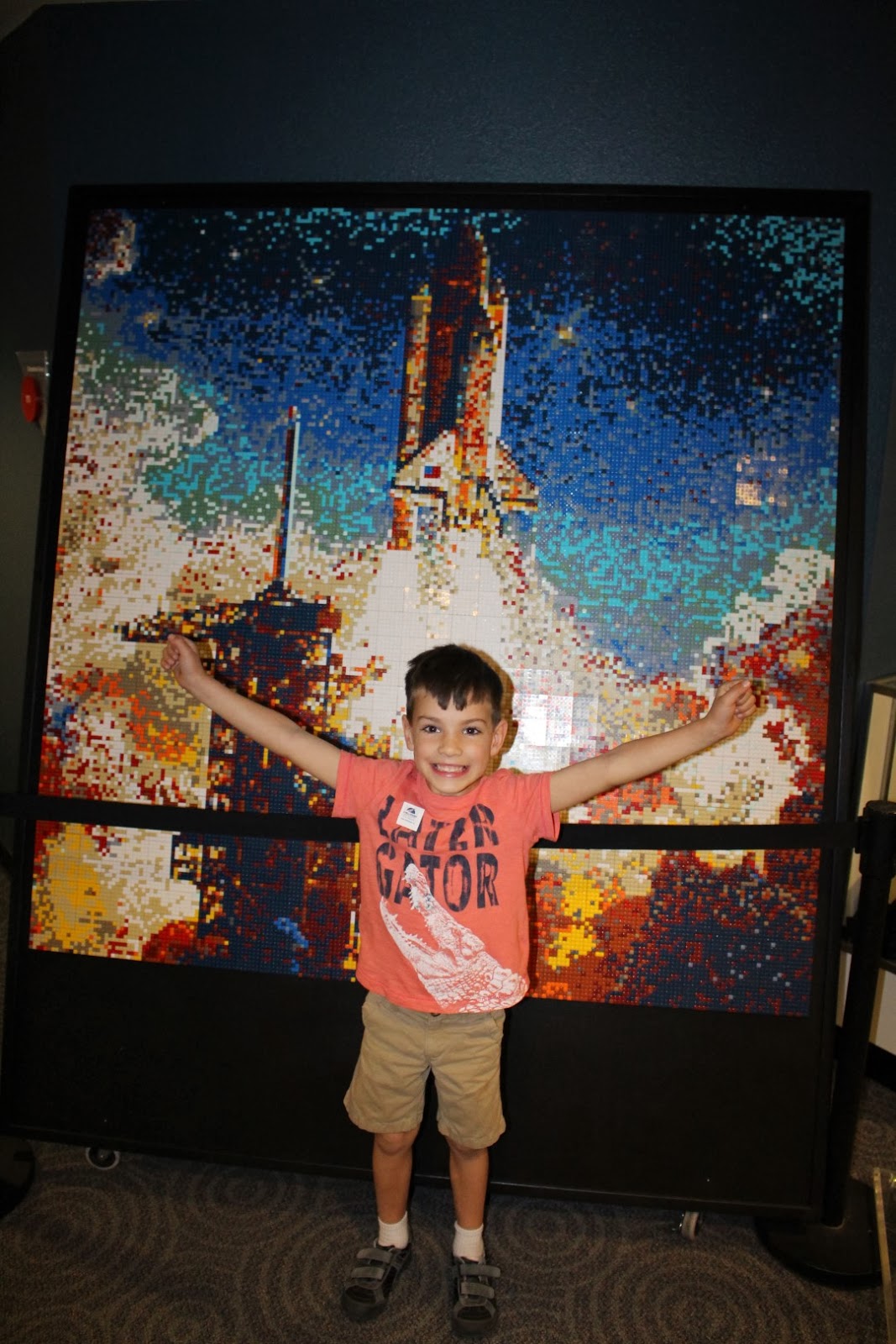 He's convinced he wants to be the first person to land on Mars even after seeing Gravity... 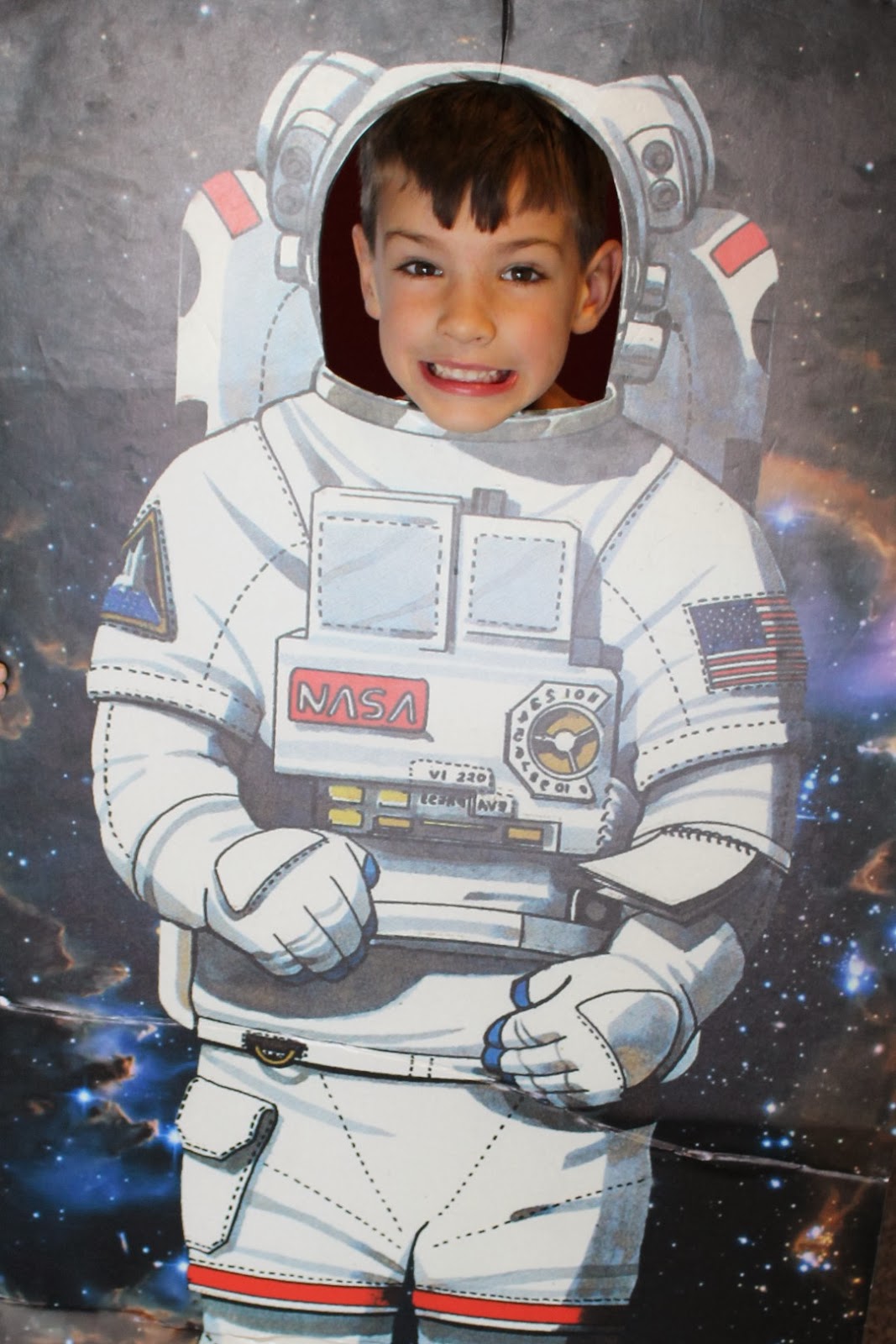 There is a huge open space in the facility.  The floor is covered with large foam pieces.  Easton quickly jumped into the sword fighting action with some other random boys playing around.  He would have stayed here for an hour if I let him. 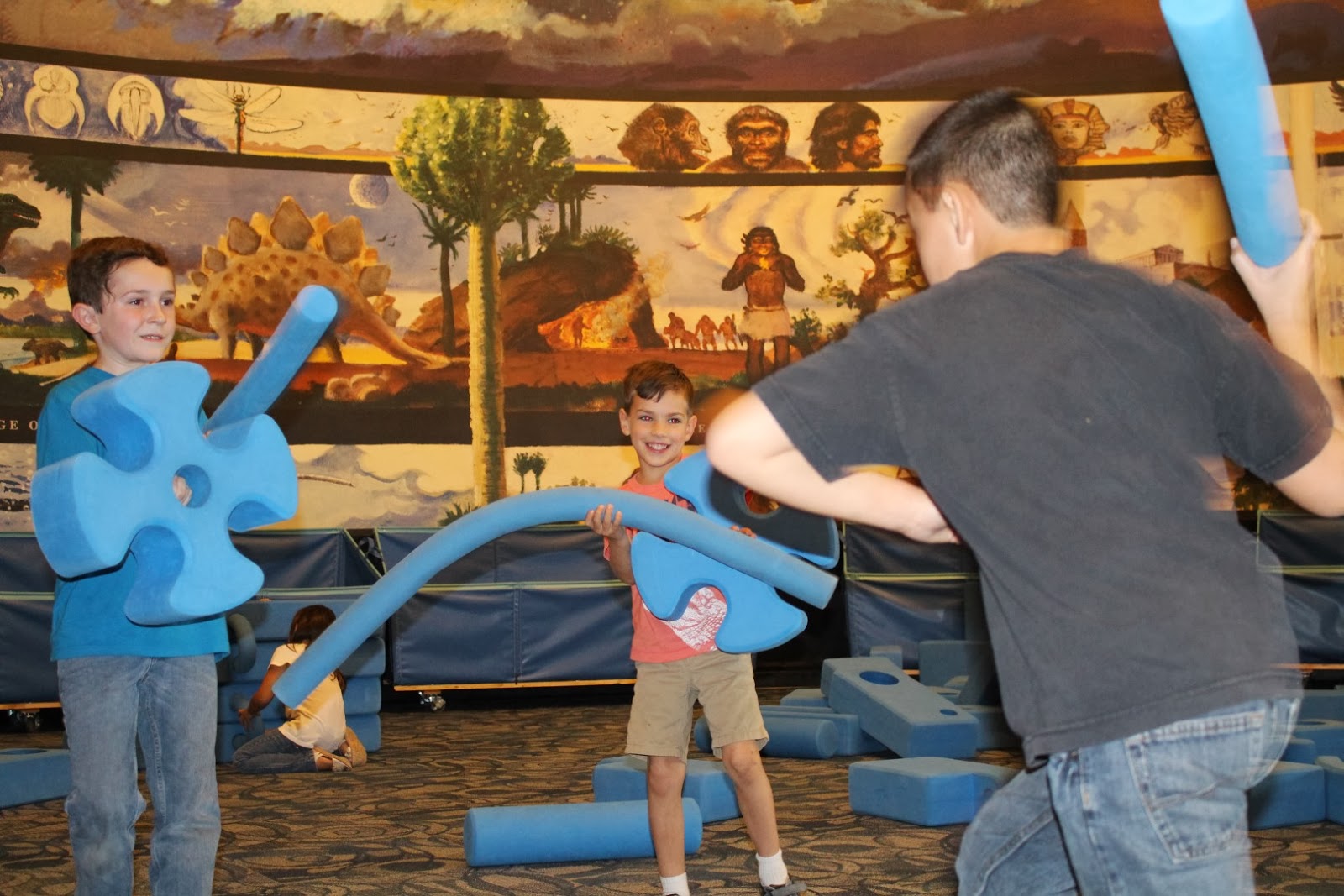 The mural on the wall is a full 3-stories tall.  It displays a timeline that includes everything from dinosaurs to pyramids to the crucifixion of Jesus to modern day.  Then the other wall has what the future of space travel might look like.  It was a dream land for Easton. 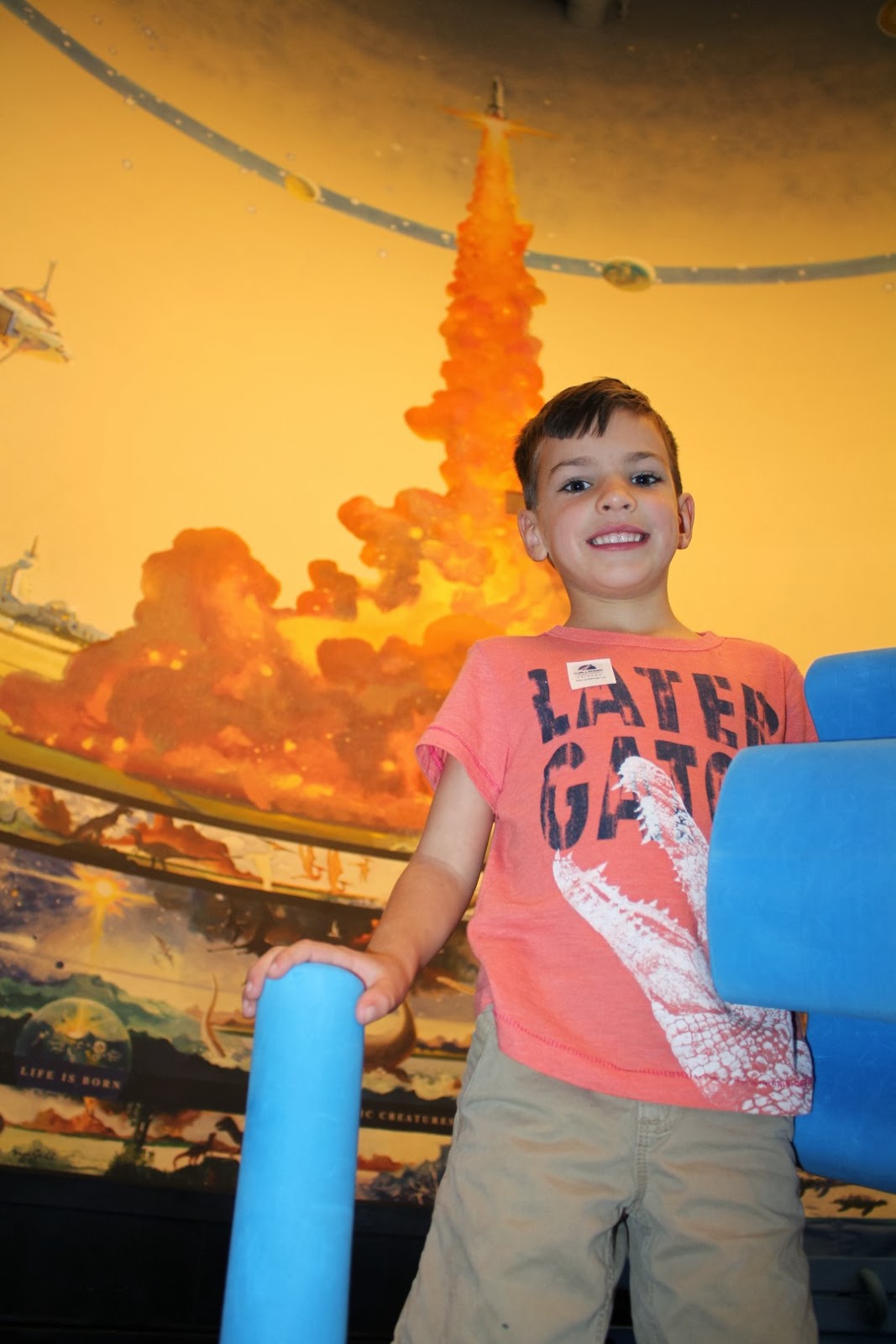 The closest thing Easton has come to seeing a real space shuttle is this massive model behind us in this picture. 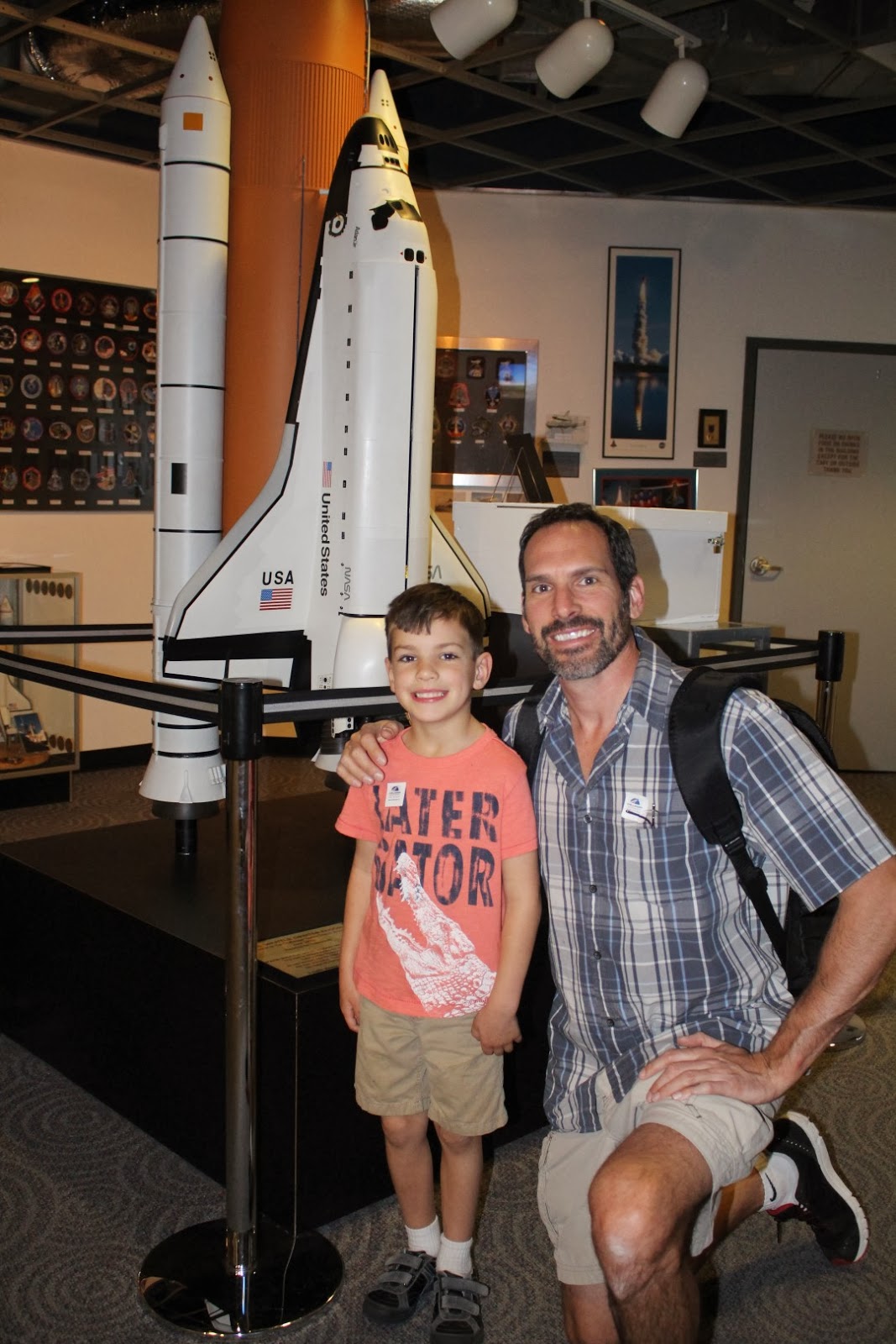 We also saw a display case with a model of the Hubble Space Telescope.  It is the exact one he has hanging in his room!  Easton's is better constructed than this one, thanks to Oupa and my efforts. 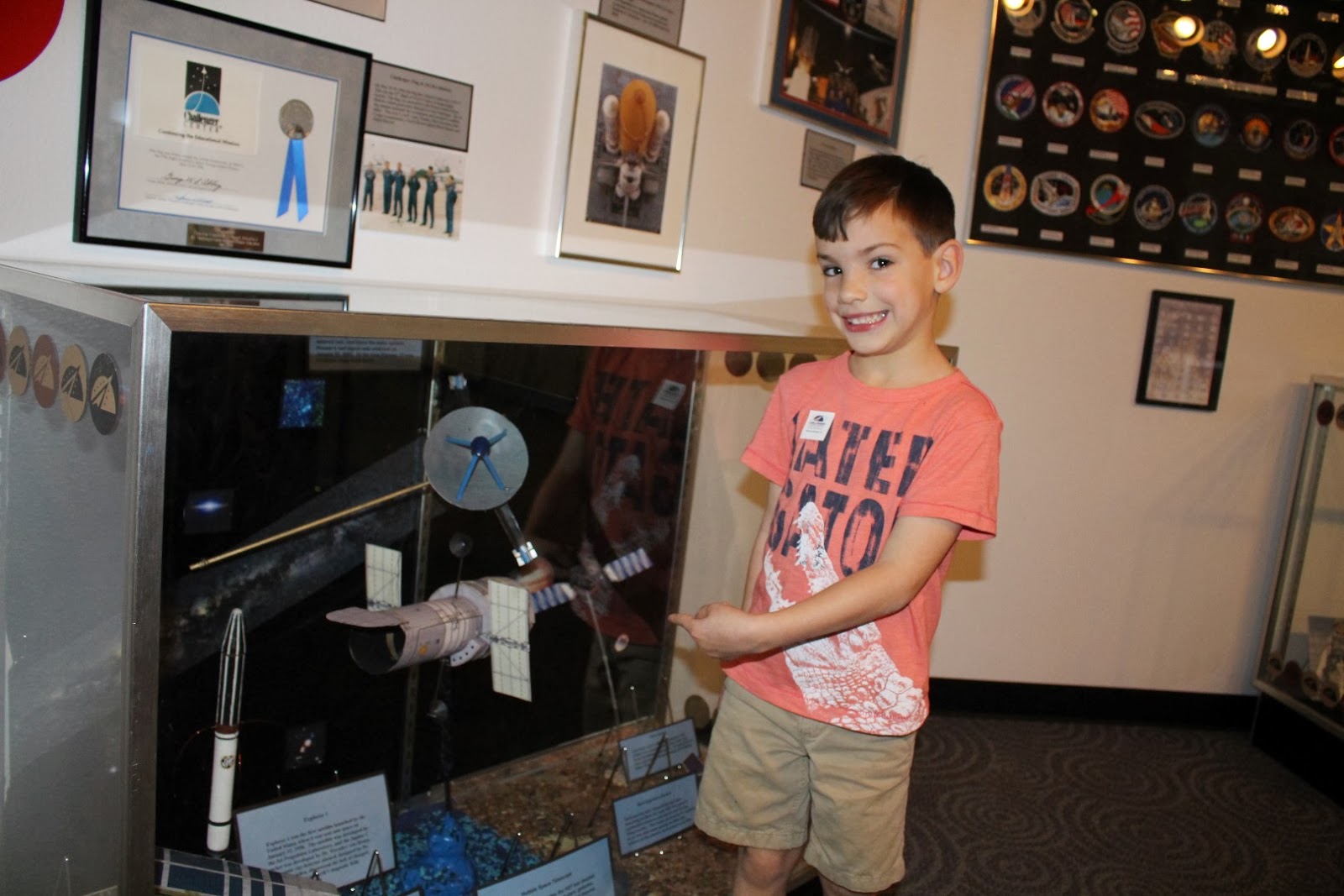 He is so fired up about going back that he begged me yesterday to take him and Layla again soon so he could show her.  The bottom line for my review of the Challenger Space Center is this:  If a kid is interested in space, this place is awesome and well worth the hour drive and $10 per ticket.  However, if a kid is not interested in space and/or younger than six years old, then this museum will be an absolute bore.  I don't know if I'll ever take Layla here because it's just not her bag.  However, Easton is already jazzed about the prospect of meeting a real astronaut and star gazing with the expensive, massive telescopes they bring out once a month.

The morning after this epic day Easton climbed into bed with me to cuddle, as he does every morning.  He gave me a big hug and said, "I like being with you, Dad, and having fun times together."

Lately I've been staying up til midnight every night and running around during the day like a chicken with my head cut off to keep all the plates spinning.  Hearing Easton say that to me makes it all worth-while.  my priorities are unchanging even in the midst of our busy self-imposed schedule.  That's what leads to a life without regrets.

My bike has been sitting untouched in my garage for weeks now.  I knew this busy season would mean putting a hold on "me time".  Even so, I squeaked in an hour ride at South Mountain just to keep the wheels greased and get my heart rate up for some cardio activity.  I picked the record high temperature day where the 88 degree weather was 18 degrees above normal.  No big deal.  just a little extra sweat dripping down my brow as I climb the hills.  better than shoveling snow! This was the one selfish thing I did during the three day weekend. 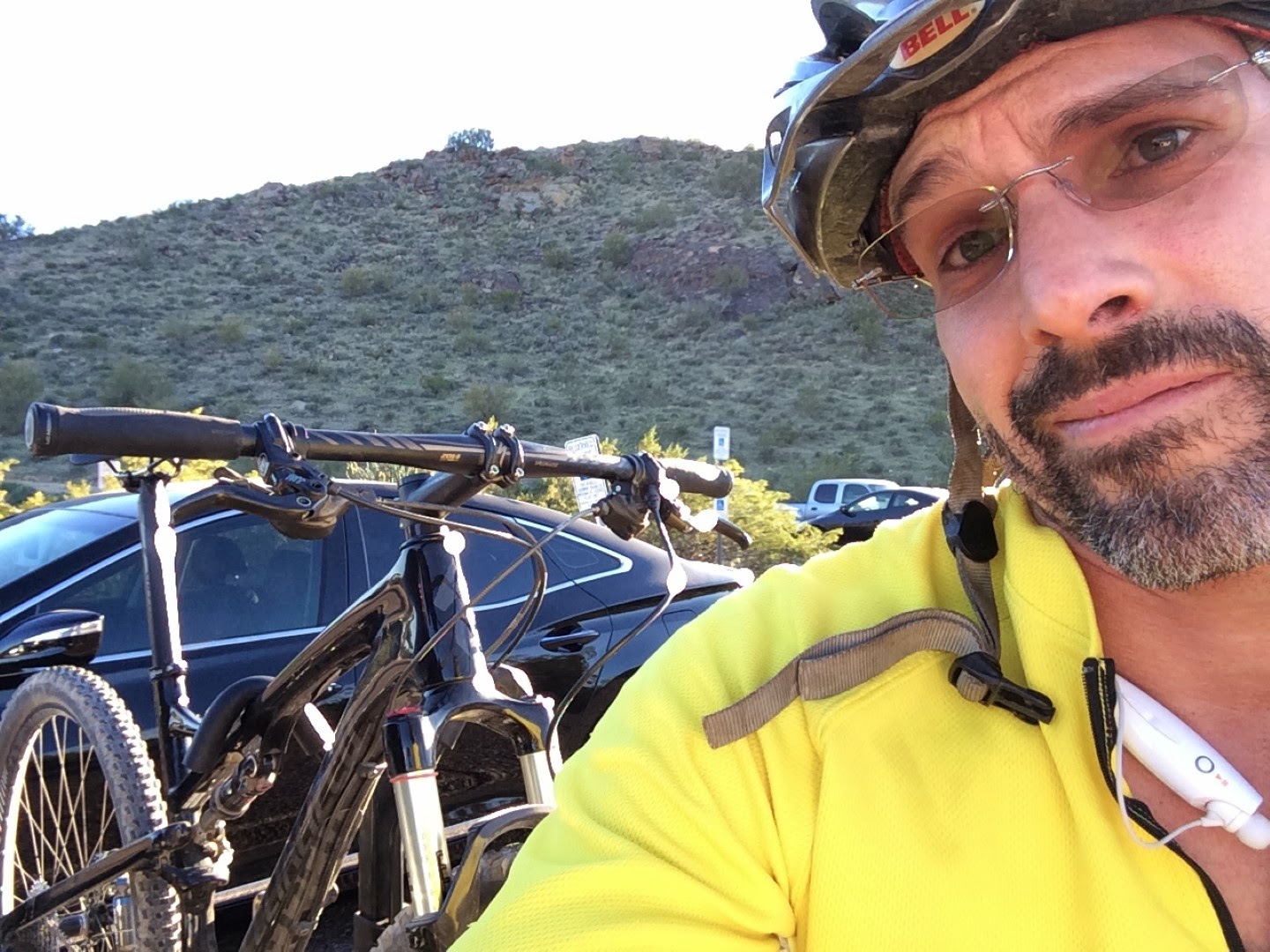 For another adventure I took the twins to the park with some church friends.  Easton brought his scooter to ride in the skate park.  I was amazed by his no-fear attitude and skills of riding up and down the ramps. 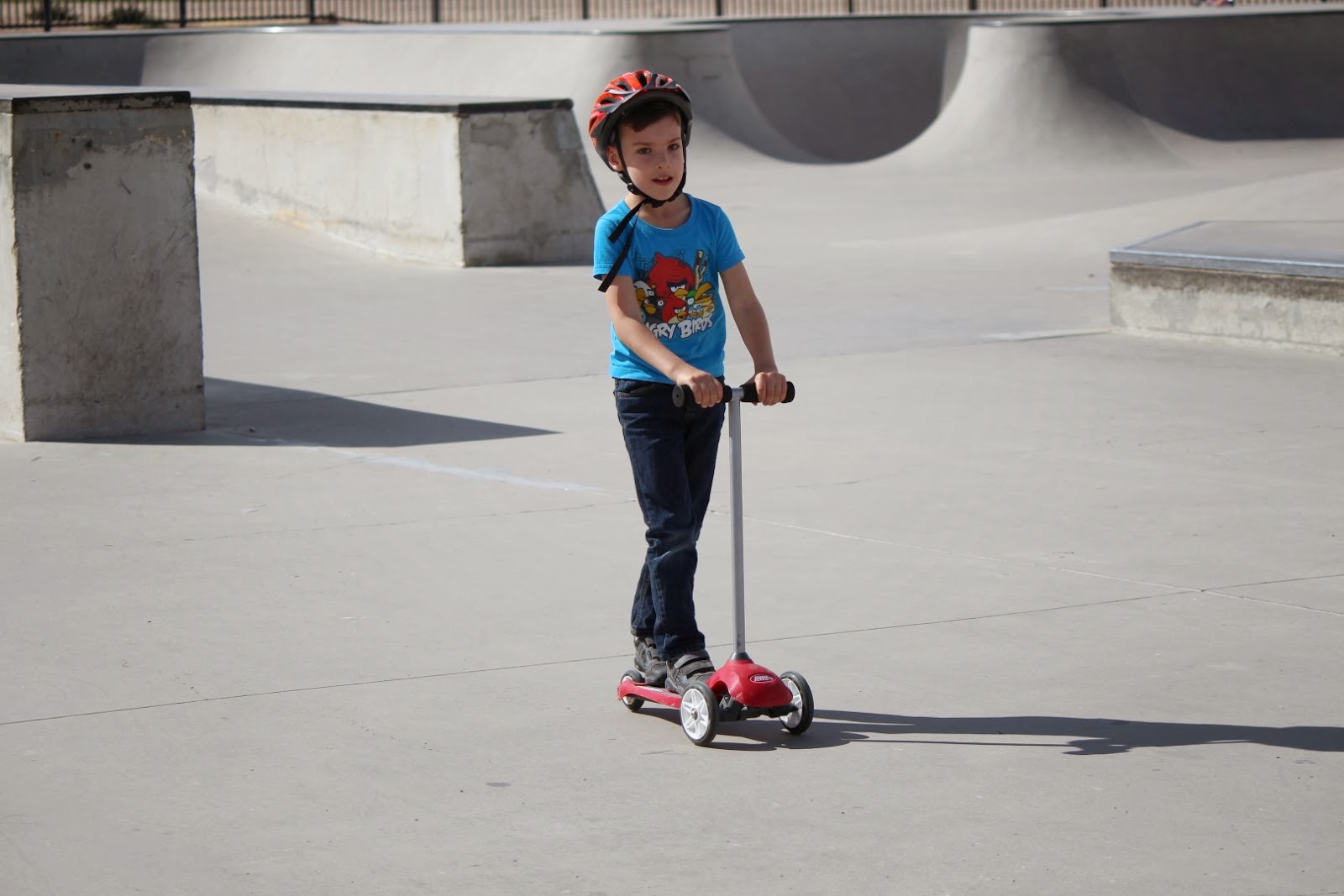 After his second time to the skate park he wants a two-wheel Razor thing because that's what everyone else was riding.  I was happy for him to have a stable three-wheel scooter until he gets the hang of his balance better.  You can tell by the smile on his face he is on his way to developing a new hobby. 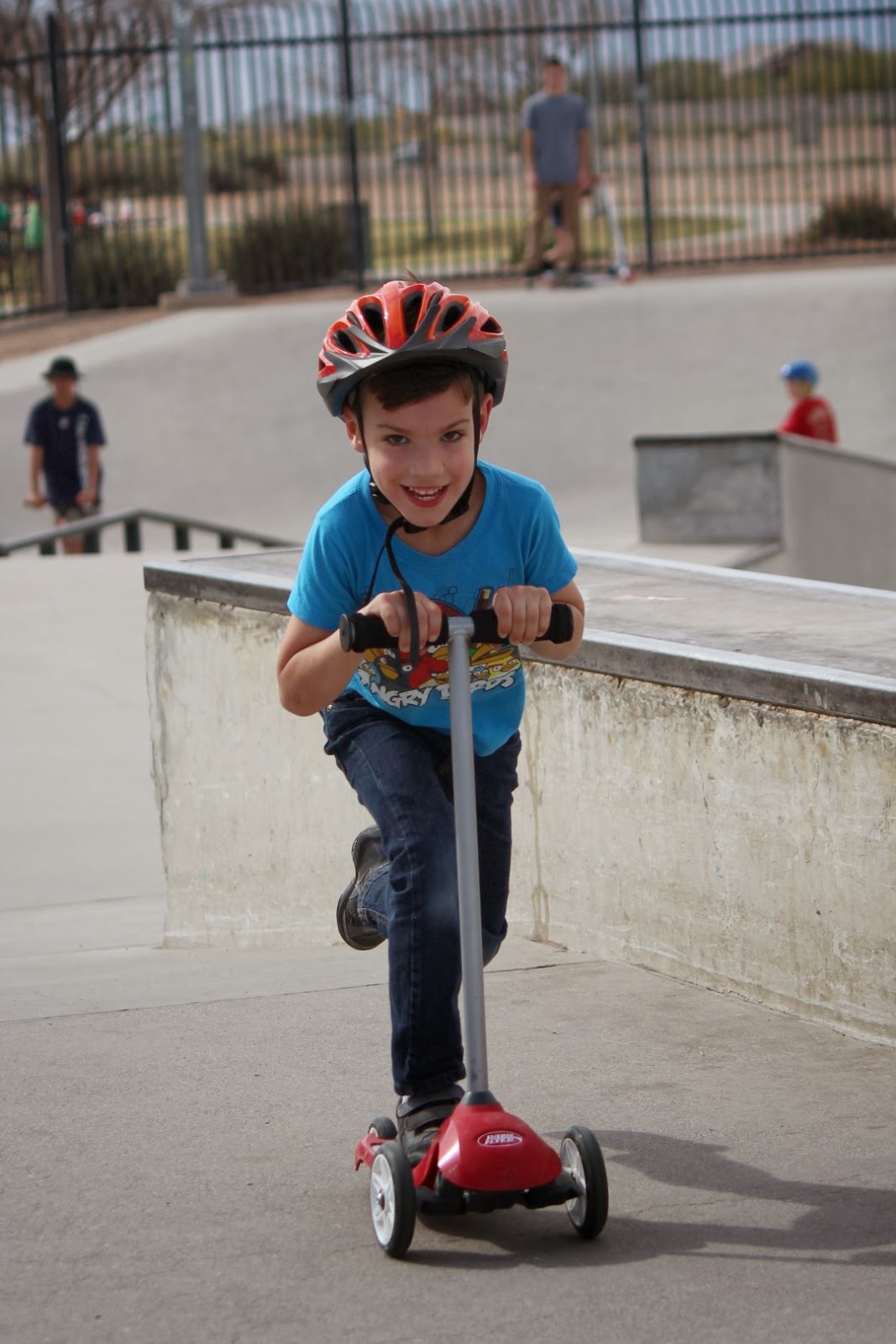 Cement isn't very forgiving when it comes to faces and body parts.  Letting Easton ride whatever he has the confidence for is another step of letting go and allowing Easton to take risks.  I should probably be more concerned, but he knows his limits well and I trust him more all the time.

Another risky activity I let him join in was football.  He already plays flag football during the PE class at his school.  He was catching, throwing, and tackling like a champ.  He even engaged in the dog pile where some strange kids and an unknown adult were wrestling to get control of the ball. 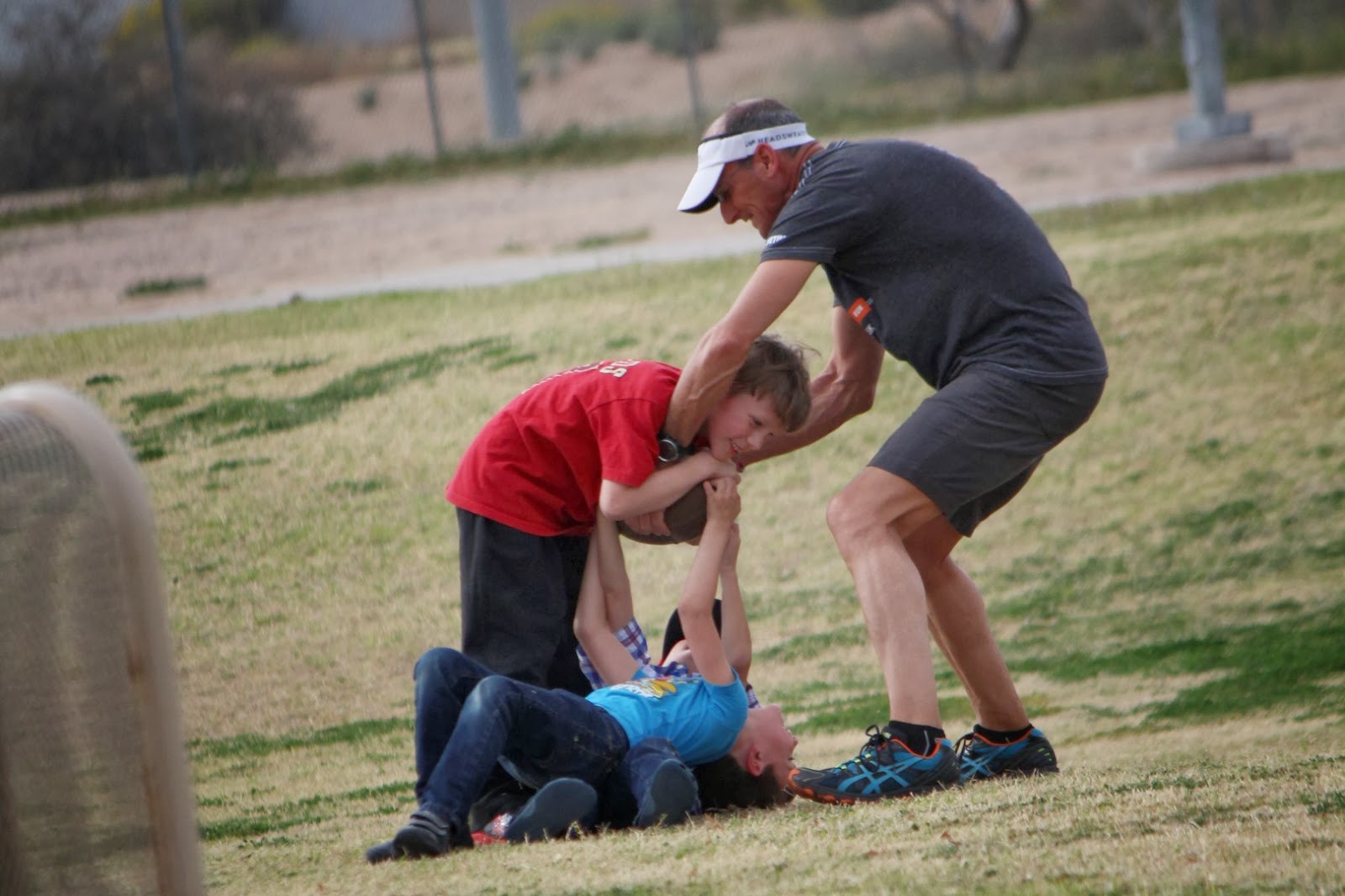 Meanwhile, Layla spent the park hour playing kittens on the playground equipment with her friends.  Joya and Kylie are a few years older than her, but I love for her to spend time with kind, friendly, older girls.  They are a good influence on her! 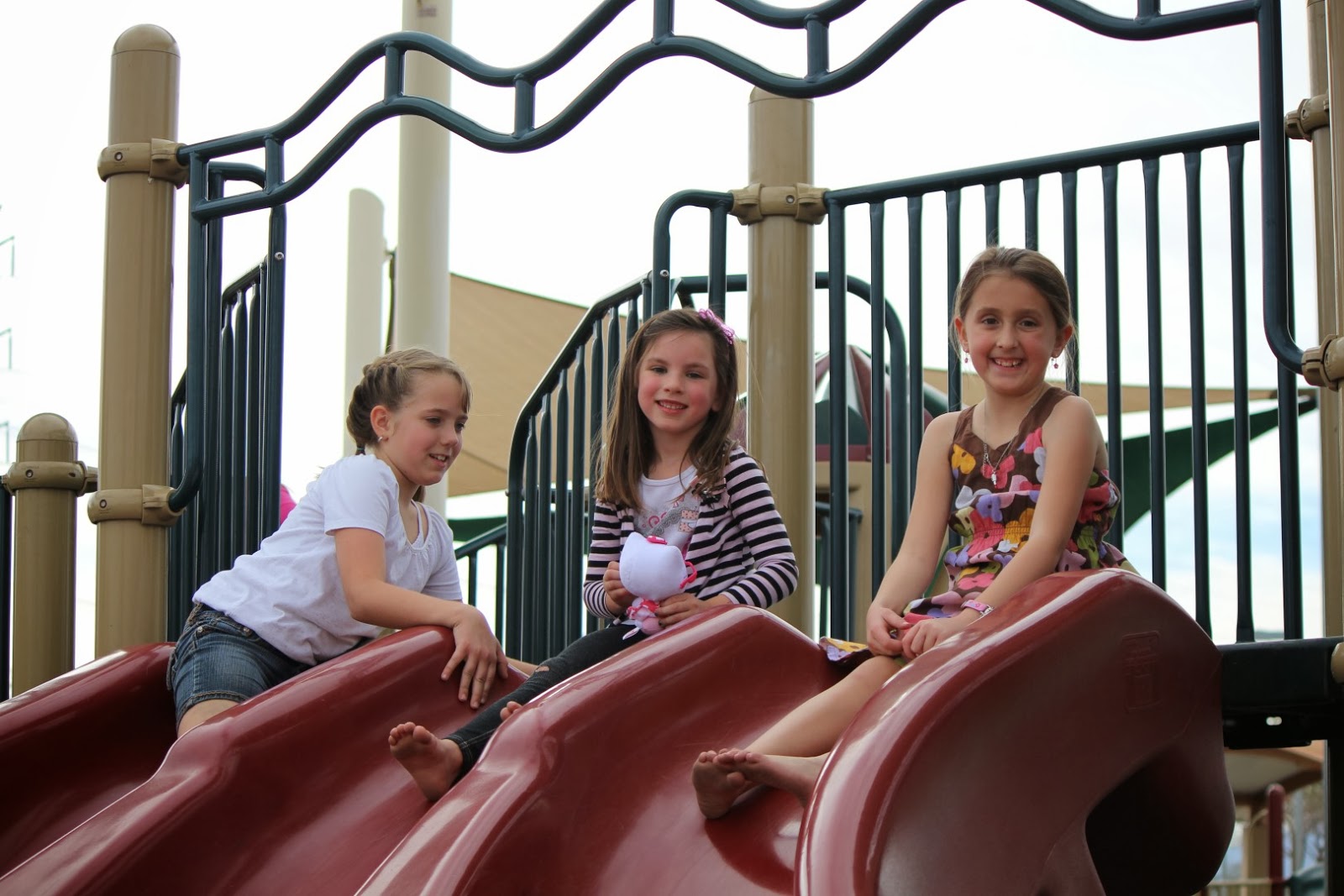 Time to get back to work so I can go to sleep by 1 AM.  Only 10 more days until we are through the finish line!