It is important for fathers to celebrate their child's successes.  There may be a limit on going bananas over the tiniest achievement, but I would much rather be riding that line than hugging the other side of the pathway by ignoring successes.  celebration my or may not include a monetary cost, but it should always include an outward expression from the heart.  I'm not suggesting that the amount of money spent on a child's milestones have anything to do with how well a child does as an adult.  However, the father's outward expression of joy and pride.  Zephaniah 3:17 says, "The Lord your God is in your midst, a mighty one who will save; he will rejoice over you with gladness; he will quiet you by his love; he will exult over you with loud singing.  Notice that God rejoices and sings loudly over us.  Not just for performance and accomplishment, but for who we are.

Easton is a yellow belt in Taekwondo now!  This is a picture of a boy looking for his father's approval and affirmation before his big "test" to show he has what it takes to be a yellow belt. 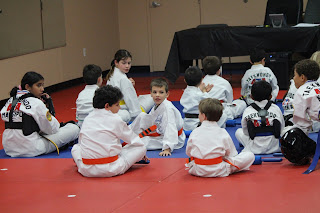 A yellow belt is not something he earned or possesses.  It's who he is.  I made this very clear to him.  Too often I hear parents congratulate kids about their performance or what they physically posses.  This leads to the performance mentality that leads a child to believe, "The better I perform, the more I am loved."  It is much more beneficial to call out a child into who he (or she) is becoming.  Once his belt was officially given to him and tied, he turned to face the crowd to be announced as a yellow belt. 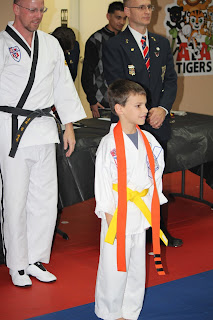 Here's the whole class of students who tested for their belt promotions.  He's still actively pursuing becoming a black belt.  We are supporting him in his goals and desires, but that means sacrificing other things we could be doing with our time and money.  He understands the value of a dollar much more than I would expect for a seven-year-old. 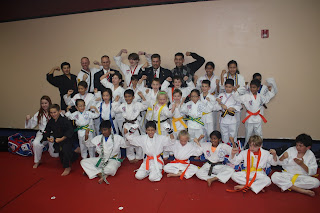 The staff at his martial arts school are very professional and I'm continually impressed by the way the school is run in excellence.  He's not getting trained by some young kid.  He's getting direct training from a champion and that's hard to beat. 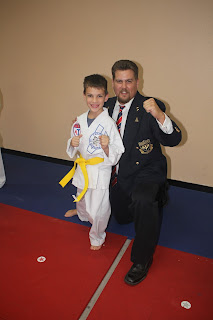 Kendra wasn't able to attend the big event because of the side effects of her radiation.  I was disappointed, but know she is limited in her abilities to get out of the house.  Lucky for us, Ouma is here!  She was able to experience the exciting evening and be a part of congratulating him. 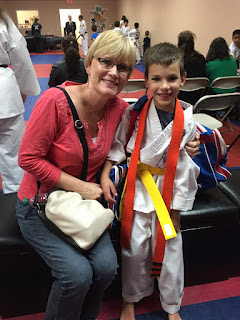 The night before this we went to Krispy Kreme for a box of doughnuts.  I went to see how Easton's bedtime routine was going and found him happily brushing his teeth with the hat on.  He is such a kind, funny boy just smiling and scrubbing his pearly whites.  The dentist gave him an A+ rating on his teeth (no cavities).  That's good news worth celebrating. 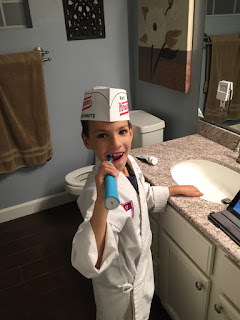 I took the twins to the skate park for an afternoon outing with their scooters.  After they grew tired of the scooters we scooted over to the playground where the twins joined a few dozen other kids for games of tag and "sharks and minnows" (whatever that is).  Layla climbed on the monkey bars for the majority of the time.  When i asked how she is doing she said, "I'm ok and don't have any blisters... yet."  She sure has lots of dirt on her hands and callouses, but this girl is a princess warrior.  Here's the warrior side... 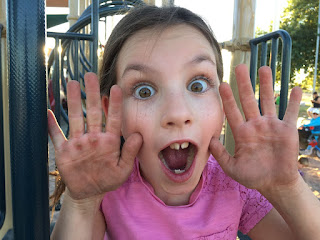 And then we had a 4 Webbs photo shoot by the Tempe Town Lakes and Layla leaned on the princess side of her personality to sparkle and shine.  She looks like a young lady and it scares the daylight out of me.  I took the picture and then looked at it on my phone.  Then I gasped and wrinkled my forehead because it hit me like a ton of bricks just how much she's really grown up already. 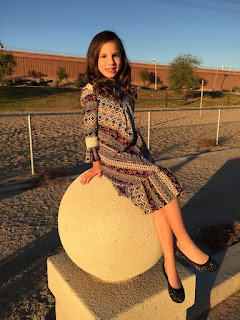 Our photographer is a beginner and a friend from church.  This was her first family photo shoot ever so we have no idea how the pictures are going to turn out.  It was a no-risk situation other than the possibility of zero out of 100 pictures turning out. 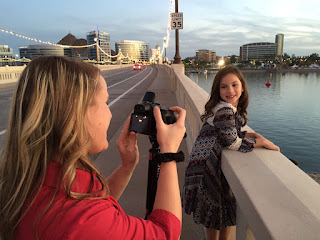 And then there's Easton.  Wow.  He's becoming a young man one day at a time right before my eyes.  I'm most proud of him for being kind.  He recognizes injustice easily and has the ability to apply himself to a single thing with laser like focus.  Whatever he chooses to do he does it with is whole being and that's a great character trait to have.  I don't know who he is becoming, but he'll be the best Easton he can be and that's enough assurance for me. We caught the sunset for some great backgrounds and even some night shots when the lights came on.  Turned out really well as long as the photographer captured it on the camera.  Ouma was with us and helped tremendously with the shuffling of kids and stuff as we moved from one site to the next.  She even got in a few pics, which I think will turn out to be some of the best ones. 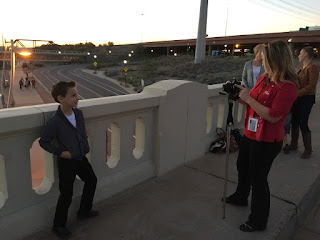 Afterwards we treated our photographer to dinner so we could get to know her on a more personal level.  It's tough to really find out about a person while she's giving instructions for taking pictures so frantically.  Anyway, as we waited for our table to open up, I stepped outside with the twins to enjoy the night air.  Layla stepped up on a light pole and I took a few more pics just for fun.  In a word...  Layla is "cheery".  Every seven year old has their moments of emotions, but overall we are blessed to have such a joyful soul reside in the body that is half Kendra and half me. 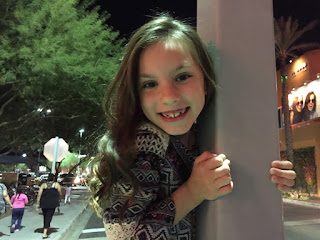 Some day I'll bring these specific pictures out when Layla is a senior in high school or something and see how much she's changed or not.  I still see the same face as when she was a newborn.  No matter how old she gets or how much her looks change I'll always see her as my little girl.  I've heard about dads describing their daughters that way even when they are grown women, but it's very different being the one to describe Layla this way. 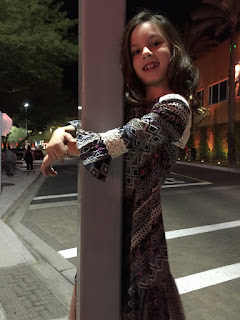 The Casa de Webb is completely full and there is no room at the Inn.  My friend David is still around, Ouma and Oupa are both staying for a week, and the 4 Webbs make seven people living under one great room.  I'm loving it because with five adults I feel like we can adequately manage the house and the twins.  Like all good things, it won't last, but I'm making the most of it while I can.  My blogging time is always in the 10-midnight time frame, but with David around and now the in-laws, we are spending every night talking and sharing and hanging out together so my blog time suffers.  It's a trade off though, so thanks for your patience.  :)