Not even sure where to start with an attempt to wrap up one of the craziest months in recent years.  I've been sitting at my computer staring at the screen for more minutes than i care to admit and I still can't sort through things in my mind enough to write them out coherently.  so i'll not even try.  Let's just go in order of the pictures.

Fall lasts about 12 days here in Arizona.  we go from blazes hot to jacket weather in a short amount of time.  The old saying, "make hay while the sun is shining" describes our current pace of outdoor activity.  Craigslist is such a great way to keep up with kids growing.  Easton and Layla both outgrew their bikes with 16 inch wheels last season.  They look like circus bears on tiny bikes.  I went to craigslist and found a great deal on Easton's bike this past week and i'll break even on the cost when i sell his old bikes.  Now he can keep up with Layla and I.  We are taking short trips to the local market and stores and parks so that the twins will get used to shifting and braking with levers.  Next week we'll be out on the mountain for a test run! 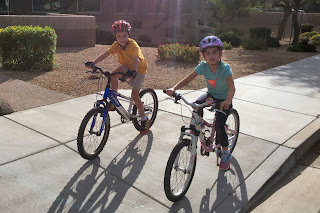 On Halloween we started a new tradition.  The 4 Webbs all wore our onesie pajamas to Chick-fil-a for breakfast.  I was the one taking the picture, but we were all there proudly eating our delicious meal together.  Easton and Layla were slightly uncomfortable at first.  I don't know when the switch of self-consciousness or insecurity was turned on, but somewhere along the way they lost some boldness.  we're fixing that as we lead by example.  We walked confidently into the restaurant and talked to a few of the strangers close by smiling at us and the cashiers.  I enjoyed every moment of the conversations and joy we brought into people's lives by just being a little silly and creative in our approach to having fun and spreading the love. 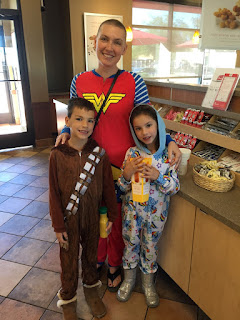 Easton earned his third stripe in Tae Kwon Do and is ready to test for his yellow belt in two weeks.  I'm really proud of him for sticking to this and watching the heart of a black belt develop.  His level of discipline at home is improving and his assertiveness in responding with a loud "yes sir!" makes me smile. 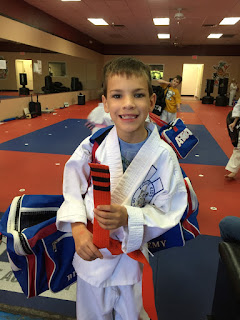 On the day before Halloween, Layla's ice skating class had a party on the ice.  90 minutes of free ice time was more than enough to convince me to take Layla.  Plus they said Easton can go too.  He hasn't laced up his skates in months, but he had a great time skating around playing tag with all the boys. 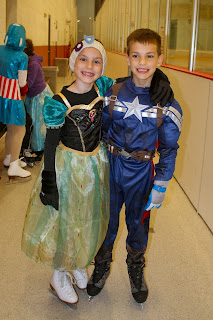 His smile says it all.  After the night was over he mentioned how fun it was, but he isn't interested in doing this again with lessons. 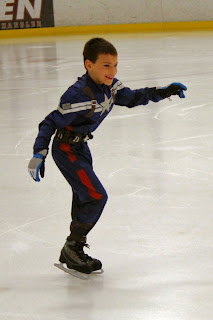 Layla was in her element dancing around like a royal princess.  Her costume was awesome and warm enough for the cold ice. 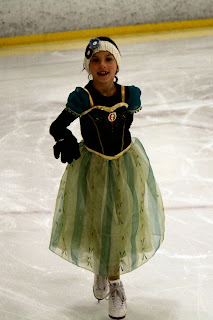 She has her own crew of pals on the ice who skate around and do tricks.  It's pure entertainment for me to watch her in action out there having the time of her life. 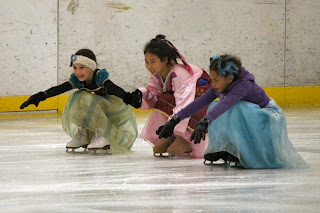 For the second year in a row we were glad to have Logan and Bree with us on Halloween.  Bree dressed as a panda and Logan had the same costume as me this year...  none at all.  Bree helped Layla carve her pumpkin.  Layla was grossed out by the slimy seeds so auntie Bree gladly stepped in to save the day. 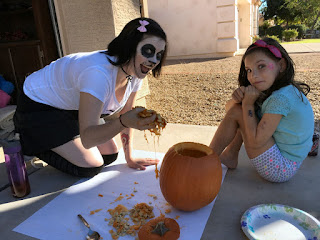 I let Easton and Layla pick out their designs.  Easton chose a creepy spider and Layla chose Tinkerbell.  The pumpkins were big, but still required some extra fine cutting of the design.  jack-o-lanterns don't last long in AZ because the dry climate destroys them quickly so we carved them up on the big day and then put them directly in the trash can after the candy bowl was all gone. 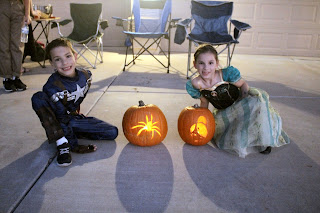 Bree and the kids had glow sticks because safety is important, even in a neighborhood like ours with very few cars driving the streets. 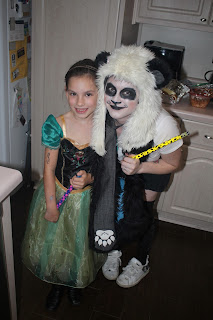 and the glow sticks can be used as Star Wars light sabers as long as no one breaks one open and gets the toxic ooze all over their costume...  luckily that didn't happen this year. 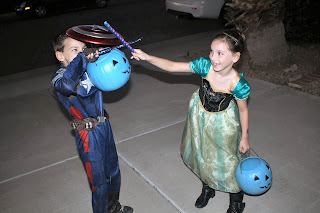 The other exciting part of our day was Ouma flying in for a month of loving on us and the twins.  We've been counting down the days!  She dressed in the batgirl costume and fit in very well with our superhero and princess. 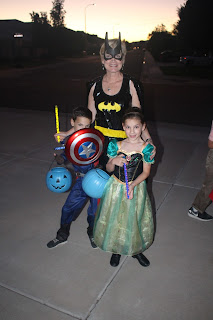 We were also happy to have stephanie and Josh spend the evening with us.  it was a full house of love and excitement and good times.  All the costume people went trick-or-treating for candy while Logan and I passed it out from our driveway to the other kids. It's like a massive candy swap that ends up costing the parents way more than the kids ever recoup from the neighbors, but it was all worth it for the great evening together. 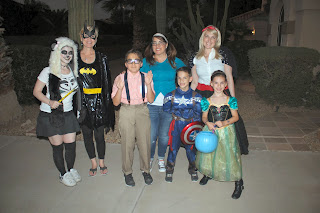 I'll be heading out tomorrow to buy a half-priced costume because I'm too cheap to pay full price for anything.  My Buzz Lightyear costume will come in handy next year too when Toy Story 4 comes out.  I'll be back in style once again!