Our house is full of people and our hearts are full of gratitude.  My friend David is still with us even though he'd rather with his family in Utah.  As soon as he gets a job he'll be gone, but in the mean time he's making our house his house.  Ouma is here for a month and Oupa is here for a week.  And one night our friend Matt slept on the couch because he worked late and wanted a place to crash.  Add in all those characters with the 4 Webbs and we have a very busy household.  I haven' heard a single complaint from anyone involved either.  We are functional and helpful for each other and considerate.  It's wonderful to watch our household flow through the days with this variety of great people around.

I get up with the kids most days to take them to school.  Lately we've been eating out for breakfast because there is no quiet way to make breakfast and eat with two seven-year-olds.  They have better volume control that they used to, but there is no way around banging pots and pans and bowls.  Anyway, part of our time together over breakfast includes memorizing Bible verses.  It's amazing what kids can memorize and how quickly they can recall these verses.  I don't care about them knowing verse and quoting them.  I care that they understand and believe them in their hearts.  This is not an exercise of intellect.  it is giving them truth on which to build their belief system.  At some point in their life someone will say something like, "all gods lead to heaven and whatever you believe in is good enough."  I want this verse to come out of their heart so they are not deceived.  I'm not teaching them verses so they can debate theology.  I'm teaching them these verses so they can manage their own relationship with God. 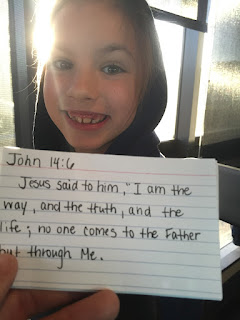 A big milestone for us was reached this past Friday:  Kendra's last radiation therapy appointment!  She was scheduled to go on Monday also, but she told the radiation doctor her body just can't handle anymore.  He agreed it wouldn't be a big deal to miss one treatment.  The moment was oddly satisfying and boring at the same time.  She hugged the doctor and we walked out.  No fanfare or line of people cheering.  No bell to ring or celebration music.  Just a slow walk, hand-in-hand, out of the facility.  I caught one last picture before we left because we believe this is the last time we'll see the inside of this building other than followup appointments.  I only went with her to a few appointments because Kendra's friends took time to be with her there day after day.  They add so much light to her journey and I'm grateful for their willingness to take Kendra to appointments. 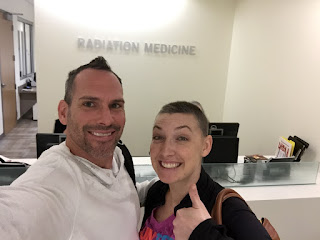 We are at an odd place where many aspects of life are changing and some are staying exactly the same.  We left our church and we left the cancer treatment world all within a few weeks.  Even so, there are many aspects that are consistent and ongoing.  Our important friendships and relationships are holding steady.  We have a steady flow of friends to spend time with and that has been very fulfilling for our whole family.  We had a game night where 20 friends came over for kid-less fun together.  Everyone brought food and we played games until 11:00pm!  Our house was loud and filled with people doing life together.  We don't just talk about it, we actually are friends by sharing life and laughs.  There is no lack of love and friendship.  These are very valuable and necessary aspects of life right now and always. 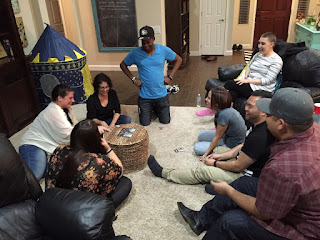 Our friend, Brett, works for the AZ Cardinals.  His wife, Stepahnie, is one of Kendra's best friends and has been for last year or so.  They made it possible for us to have a memorable weekend being around the team.  We went to the practice facility where we watched the team run plays on the field.  Easton and their son played catch a few feet behind the line of monstrous men.  He is completely oblivious to the magnitude of just how amazing it is to be there.  I didn't mind at all either.  He sees that whole line of guys as just some other men and fathers.  I'm glad he is able to see humanity as they are and not as the TV or fame makes them out to be. 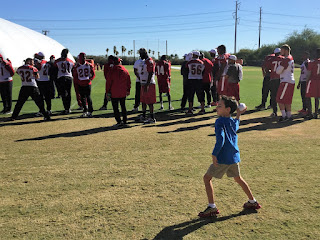 We hung out while they practiced and watched the way things flow like a flock of birds on the field as they ran plays and coached.  I would have been content to just sit and watch them do what they do best even at a half-speed trot through their playbook. 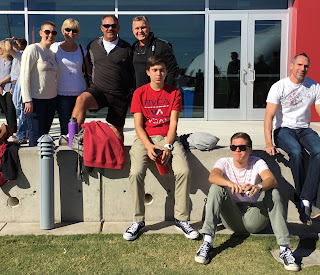 After the practice was over we had the chance to meet lots of the team.  Tyrann Mathieu came over with his kids and Kendra got a hug from one of them.  Tyrann is a quiet, gentle guy who took the time to meet us.  That's not the same powerhouse, warrior people see on the TV screen, but I am thankful we were able to see the reality of who he is off the field. 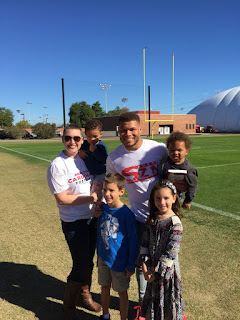 Then there's this guy, Terry McDonough, who we met and had no idea he is a vice president in the Cardinals organization until a few minutes into the conversation.  He interacted with us even gave Kendra a shirt because she wore a hot sweatshirt that was overly warm for the perfect weather. 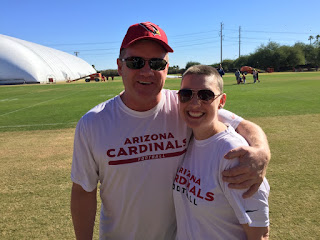 Another one of Brett's patients and friends is Frostee.  He met our whole family and although he has no idea who we are or remembers our names, it was such a surreal moment to be talking about normal life things to this guy who is on the TV every weekend. I learned he's been married a year.  I also learned we have virtually zero in common.  His world and my world would never crossed paths if it weren't for the invitation of Brett to be there.  OK, maybe our paths would cross at the DMV if he has to get a driver's license or something.  Other than that scenario, it was a one-in-a-lifetime opportunity. 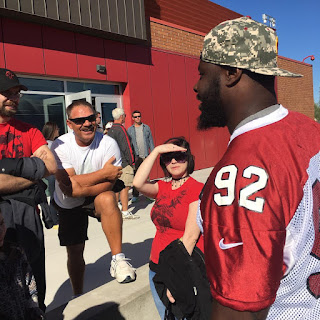 Carson Palmer is one of Brett's success stories in that he helped rehab him.  Carson came over to our group and met us all.  He even signed a small football for Easton!  I wish I had a better story to tell about this moment, but we were all just star-struck.  I've decided the term star-struck just means, "we have absolutely nothing in common and this is awkward because we will never meet again and we are both ok with that". 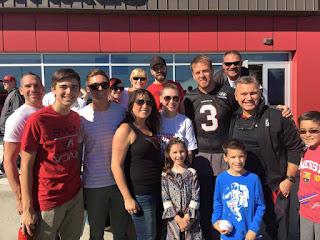 That all happened on Saturday and then came Sunday.  We visited a church Sunday morning then loaded up the battle wagon and headed to the stadium to see the Cardinals play football for real.  Stephanie brought Oupa and Kendra.  I won tickets from work so I brought David.  The five of us had the best time together.  We tailgated because we are too cheap and too healthy to spend $20 for a hotdog. 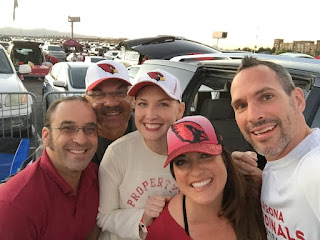 The seats were unbelievable and the energy in the stadium was enough to turn anyone into a sports fan.  Kendra's time with her dad was special for many reasons and this memory will remain up there with the best of them. 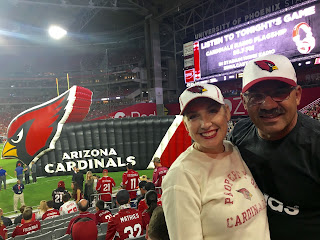 This celebration weekend for Kendra was brought to you by... Stephanie.  She put this all together and made it happen with great enthusiasm.  Those two are fun to watch together because they know how to enjoy every moment from doctor visits to last-minute game-winning scores. 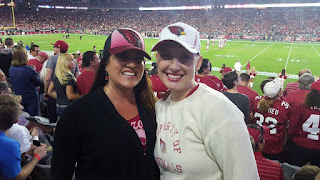 I could see Kendra and we did some hand signals back and forth a few times.  David and I had our own experience across the stadium.  He has been my friend for eight years.  Having him live with us is making his imminent departure even more difficult for me.  He knows things about me that no one else in the world knows.  He and I are deeply vulnerable and open with each other.  That's not something two guys can jump into quickly.  It takes time and bonding experiences and trust and all the good stuff that makes a friendship really work.  He was the first person to come to mind when I learned I had one ticket to share with a friend.  Once he's gone to Utah we will always remain as friends, but having your best friend live down the hall is so much more engaging than keeping up with him through phone and text.  I'll be grieving for the next few weeks, but these kinds of memories are what leads to life-long friends. 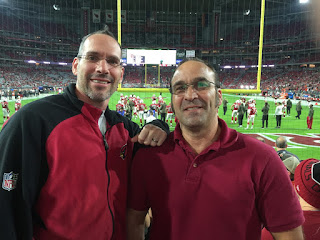 Turkey day is coming soon and I'm looking forward to family time and vacation time from work.  See you soon!