Have no fear, Ouma is here! She agreed to spend a month to be with us through the last few weeks of radiation and the first few weeks of Kendra's recovery.  Very few guys I know get excited about the idea of their mother-in-law living with them, but I sure do.  I am always happy to have her around even though I'd rather have Oupa here as well.  He'll be here soon enough to share in some Thanksgiving festivities.

Easton and Layla worked hard on their revolutionary war project.  They chose which character to learn and perform as.  Kendra wasn't feeling well enough to go, but Ouma was! 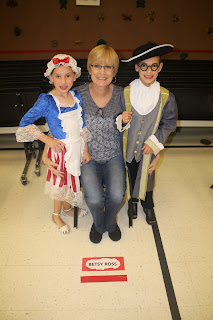 Layla chose Betsy Ross.  She learned about her and memorized a short biography to describe why she was important to the revolutionary war.  Parents and Grand Parents would walk up to one of the kids as they sat in the chair and when they stepped on their name, the kid would come to life as they stood up and recited their lines.  Layla was right by the front door so her button was pushed frequently. 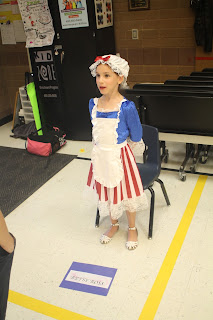 Easton chose Benjamin Franklin.  His outfit was really awesome except for the high water pants.  That kid just grows and grows.  We still haven't learned to buy clothes too big so that they eventually fit.  Instead, we buy perfectly fitting clothes that last about three weeks and then become material for ridicule at school.  Easton did great with his character and speech.  I bet the two of them will be able to recite their lines for the rest of their lives.  Not sure how we'll repurpose the two costumes, but I'm sure they will come in handy again sometime.  Hopefully before they grow out of them... 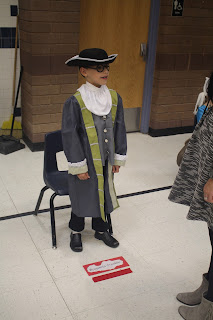 One morning I quietly slipped out the door before school with the twins and we went to breakfast so the rest of the house could sleep in.  As we were driving Easton pointed out an amazing double rainbow on the horizon.  We pulled into the parking lot of the breakfast joint just as the rainbow reached full display of the great colors.  Sprinkles were coming down, but I convinced the twins to go stand in the rain long enough for me to take a panorama shot with my phone.  It isn't the greatest quality, but this is one of my favorite pics in a long time.  Those moments of just having breakfast together and talking about random thoughts are some of my favorite moments too. 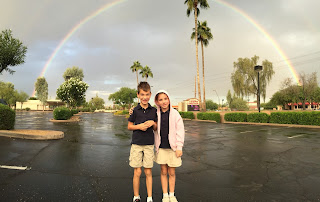 Kendra and I are in this odd season of being without a church home.  We are not itching to find a new one, but at the same time we aren't going to wait months or years to find a new place to plug in.  we just don't know what God has in store for us and we are completely fine with that.  One of the concerns we had was that we didn't know how our friends would react.  who will remain friends and who will abandon us as soon as we walk out the back door of the church?  Well, we are pleasantly surprised by the number and quality of friends we are keeping in our lives.  Stephanie and Brett are one such family.  We stopped by to prepare for their neighborhood garage sale.  They allowed us some driveway space to sell our garbage to local treasure hunters.  She gladly added to our newly clean house by giving Easton the biggest Picachu I've ever seen and Layla a huge, cuddly giraffe. 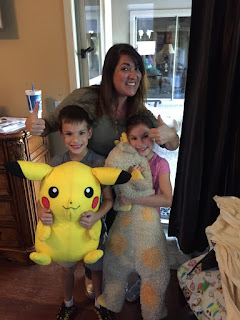 Kendra and Stephanie have the same "let's make a deal" gift and we had a great time hanging out together and haggling over a quarter. 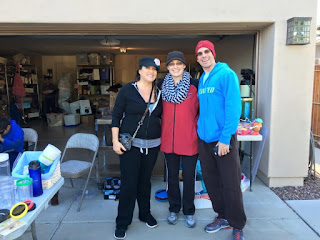 Kendra brought out our Thanksgiving hats to sell and tried them on just for fun because they are so silly.  With Kendra's hair being so short, but growing in quickly, this picture gives no indication of whether she has a massive mountain of hair or a bald head.  I like how much these two laugh when they are together.  It's good for her soul. 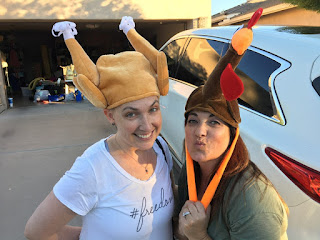 Easton is getting into football.  not because we watch it around our house or talk about it... ever...  He's into it because his school yard buddies are into it.  Ouma bought him some squishy Cardinals-themed footballs.  Easton and I are making the most of our awesome weather days by throwing and kicking the ball back and forth in the greenbelt.  I like that Easton still invites me into his world and wants to play together.  As long as he's willing, I am happy to be a part of it. 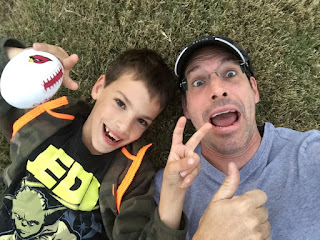 We went to Joe's Farm Grill after attending a potential church.  As we sat outside waiting for our food, Kendra noticed a table full of peculiar bird lovers.  We went over and introduced ourselves like sociable, kind people do.  One of them offered to let the twins hold her bird.  I don't even remember the bird's name, but it was a "rescue" bird, which means it was scraggly with big patches of feathers missing.  Sweet bird though! 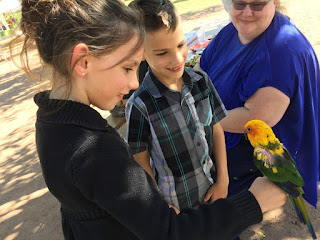 Easton was a little more hesitant than Layla, but after seeing how she didn't die or get bit by the little bird he was willing to give it a shot.  The happy little bird bobbed his head up and down to the beat of his owner's beat-box noises. I intentionally go out of our way to interact with people who aren't like us because I want the twins to know that people, in general, are kind and friendly and interesting. 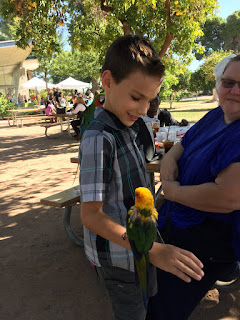 Like this character, David.  He's living with us for a few weeks or months while waiting for a job to open up in Utah his family is already moved.  He's my best friend and I'll be sad when he leaves in a few weeks.  While he's around, he is just part of the family as much as any other member.  He's really handy too.  We've needed to replace the exterior door to our garage since we first moved in.  rain leaks in and floods our garage because the door is disintegrating.  David found a handyman willing to do the job for $450.  David said we can do it better and cheaper.  It ended up costing us two full days, 6 trips to Lowe's, and over $500.  It was a very good learning experience though and I'm glad we did it.  I would never have attempted this without him here, but his confidence and skills came in very handy. 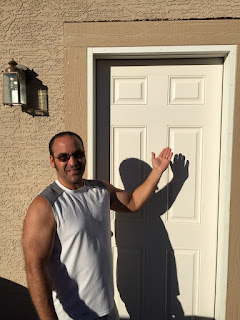 He's also picking up cooking meals and cleaning up as well.  Kendra calls him the "hus-friend".  He's taking care of things around the house like a husband, but he's just a great friend because the husband role is already covered around the Webb house.  Homemade tacos?  Their nothing like Aunt Mary's, but they are authentically good in their own delicious way. 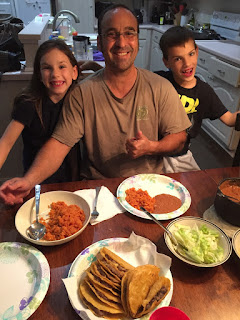 The really big news from a few days ago is that Kendra's biopsy results came back from her vertebrae surgery.  The biopsy showed the cancer is gone in her vertebrae and it's completely healed!  This was a happy day for us. 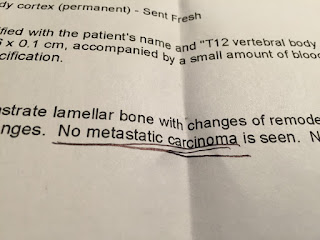 We celebrated by resting and relaxing together.  I set this picture up in our back yard because it is symbolic of how we are managing through this treacherous journey.  I love her more every day and I'm thankful for each and every day we have together.  It's been eight months since that dreadful day we went into the hospital.  Feels like eight years some days.  Kendra's radiation will be done in two weeks.  She is excited for that glorious day of leaving the hospital after her last radiation treatment. 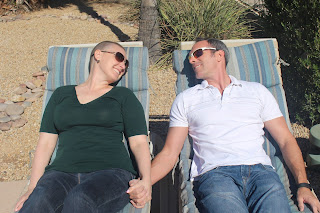