Many people have asked what we are telling Easton and Layla about Kendra's cancer.  My response is, "we tell them the truth in as much detail as a seven-year-old can comprehend."  We don't lie or sugar coat anything.  There are some details that we choose not to share with them because they aren't important, but whatever question they ask, we answer openly and honestly.

We explained about the cancerous tumors, her fractured vertebrae, the hysterectomy, the laser radiation and now the next step, chemotherapy.  Before that starts this week she had to get a port inserted in her shoulder so they can avoid starting a new IV every week.  That surgery was Friday and we took another doctor date trip to the hospital.  She was sedated, cut on, received the portacath and sewed up with super glue and stitches.  We have fun together in the most odd surroundings and circumstances.  Kendra told me not do the duck face because I look silly.  She's got it down pretty well. 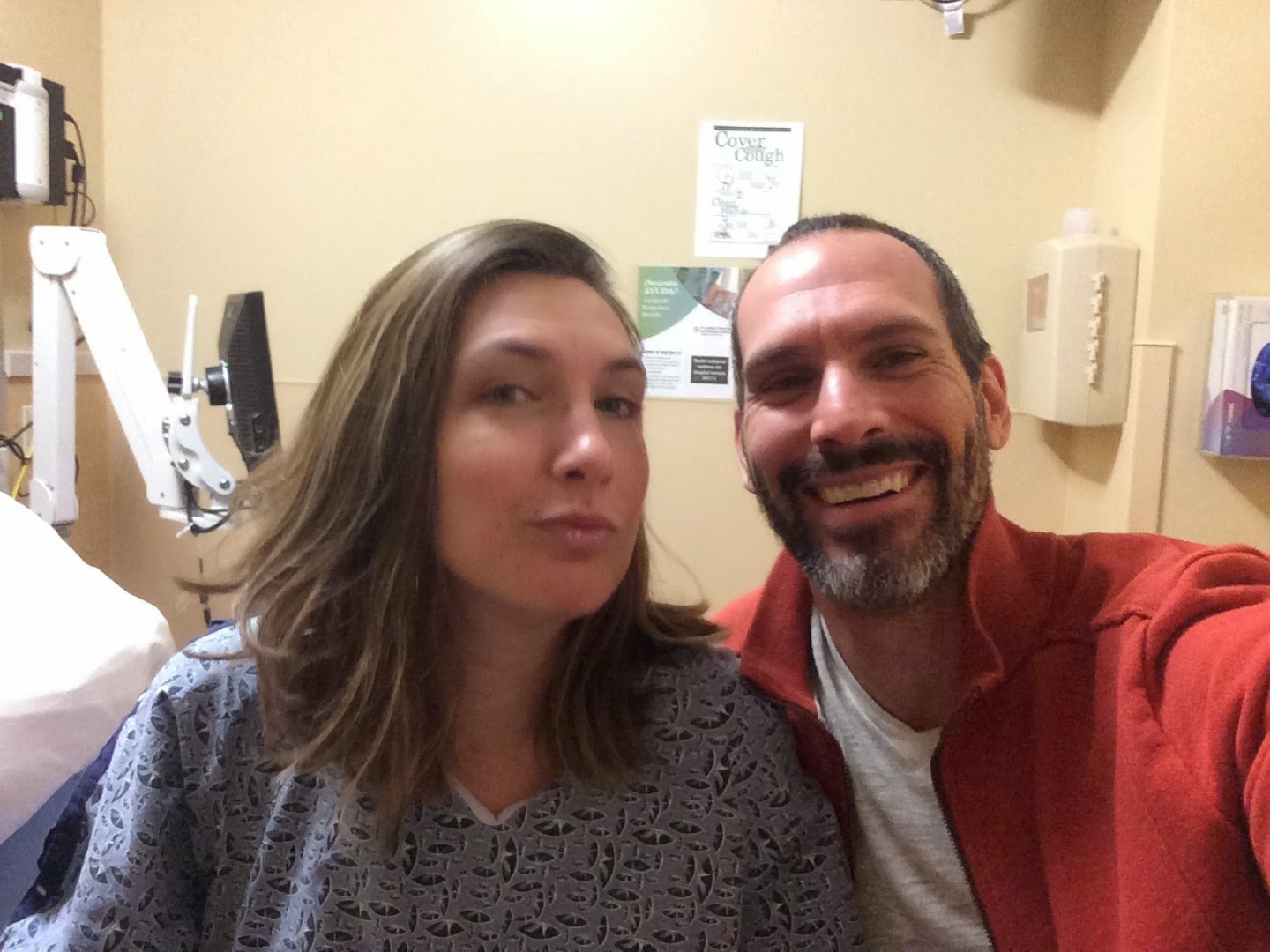 and the "after" picture that I hate more than anything in the world right now.  Watching my wife suffer is one of the most painful feelings I've ever experienced.  I held her hand as she came out of sedation.  Two new scars and a bump under skin accompany the swelling and bruising around the new device.  This is a sight I will see one more time as they remove the port from her body 6-12 months after the chemo is done.  That will be a glorious day and I'm already looking forward to it. 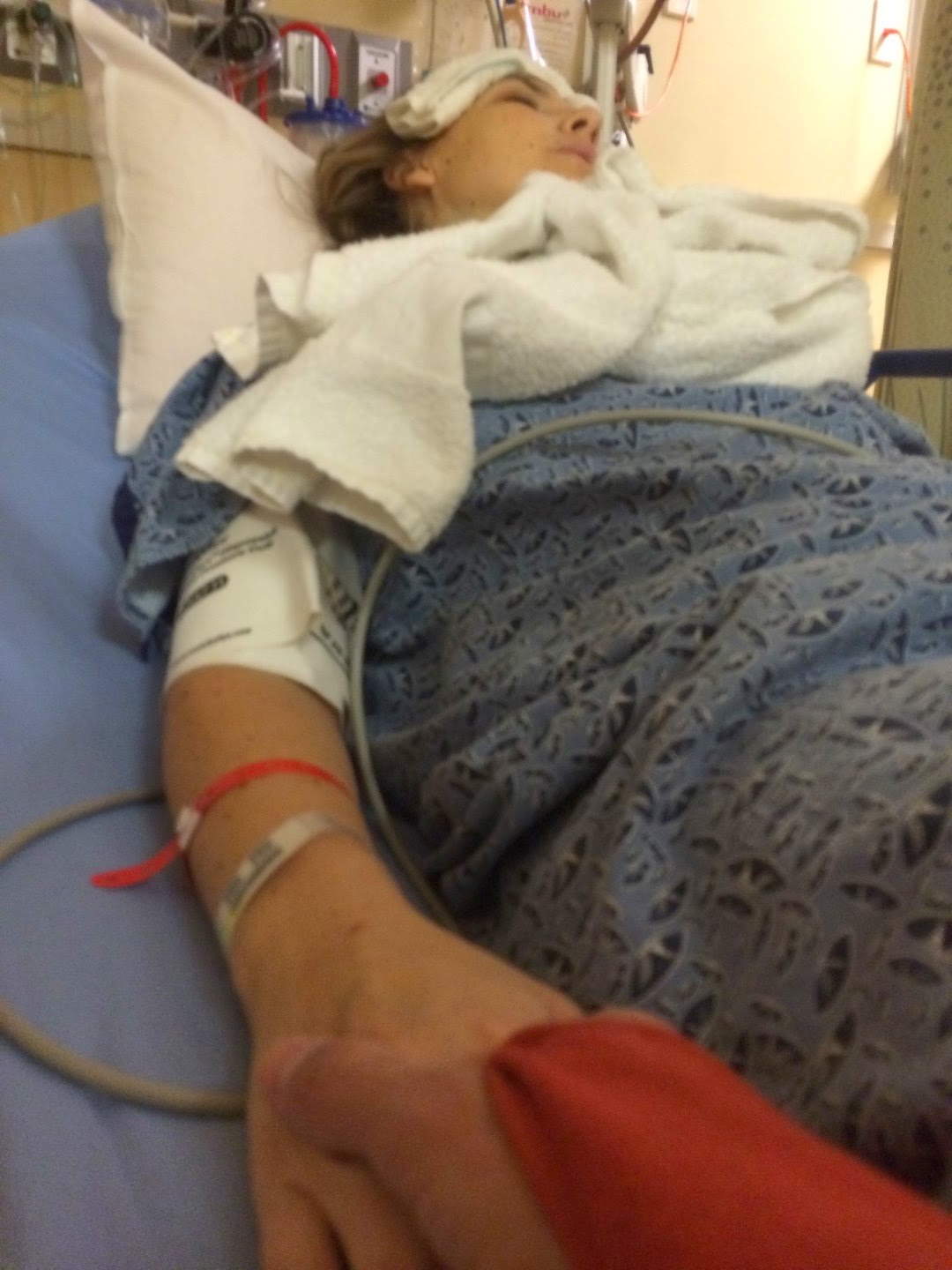 The rest of this post is on the lighter side of things, but without Kendra.  She is throttling her time out of bed by making every moment count when she's standing or sitting.  Joanie and I have managed the kids and the house as a tag-team effort.  Sometimes she is with the kids, sometimes I am and sometimes we both are.  the bedtime routine is one of the most enjoyable times of the night because the kids are calming down and playing together at home.  Daphne and Trinity fit right in with our princess, Layla, and her night gowns. 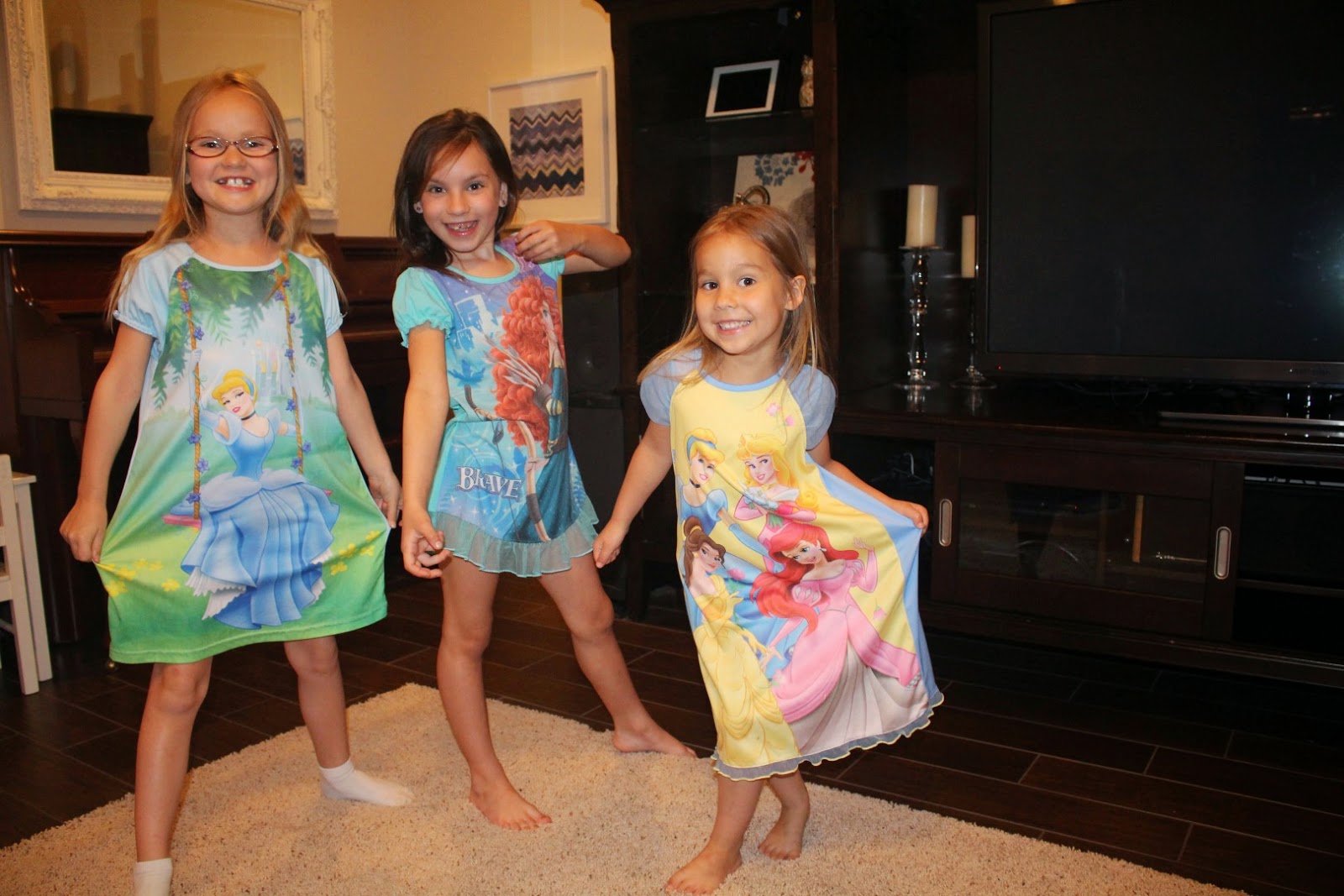 One of those occasions where we both hung out is the breakfast trip to the Hangar Cafe in Chandler. 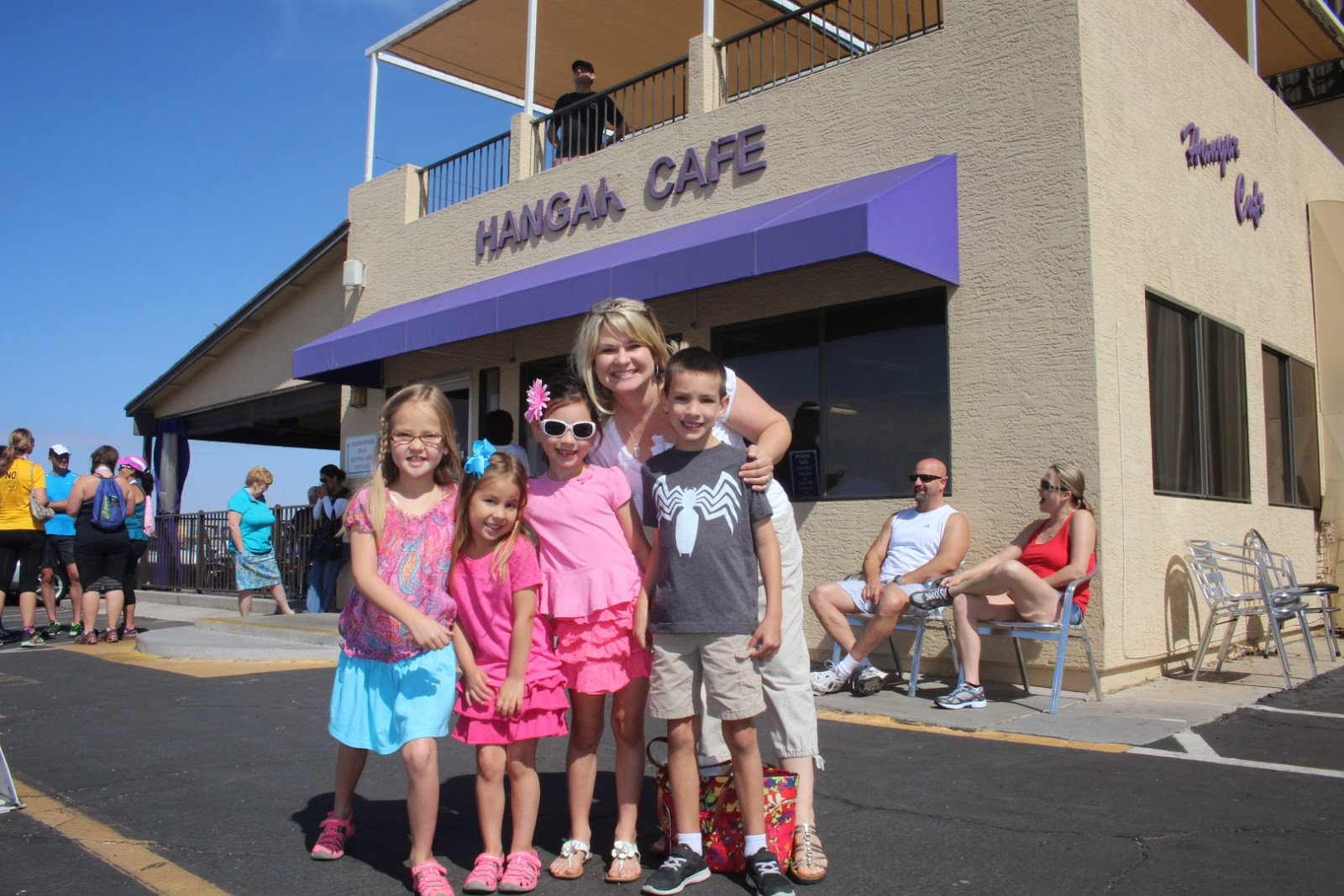 The cafe is literally next connected to hangar so it's more than just a theme of the restaurant.  we checked out some commuter planes while waiting for our table to open up.  If we had a few more minutes we could have convinced the mechanics to let Daphne and Trinity sit inside one of the planes in for repair. 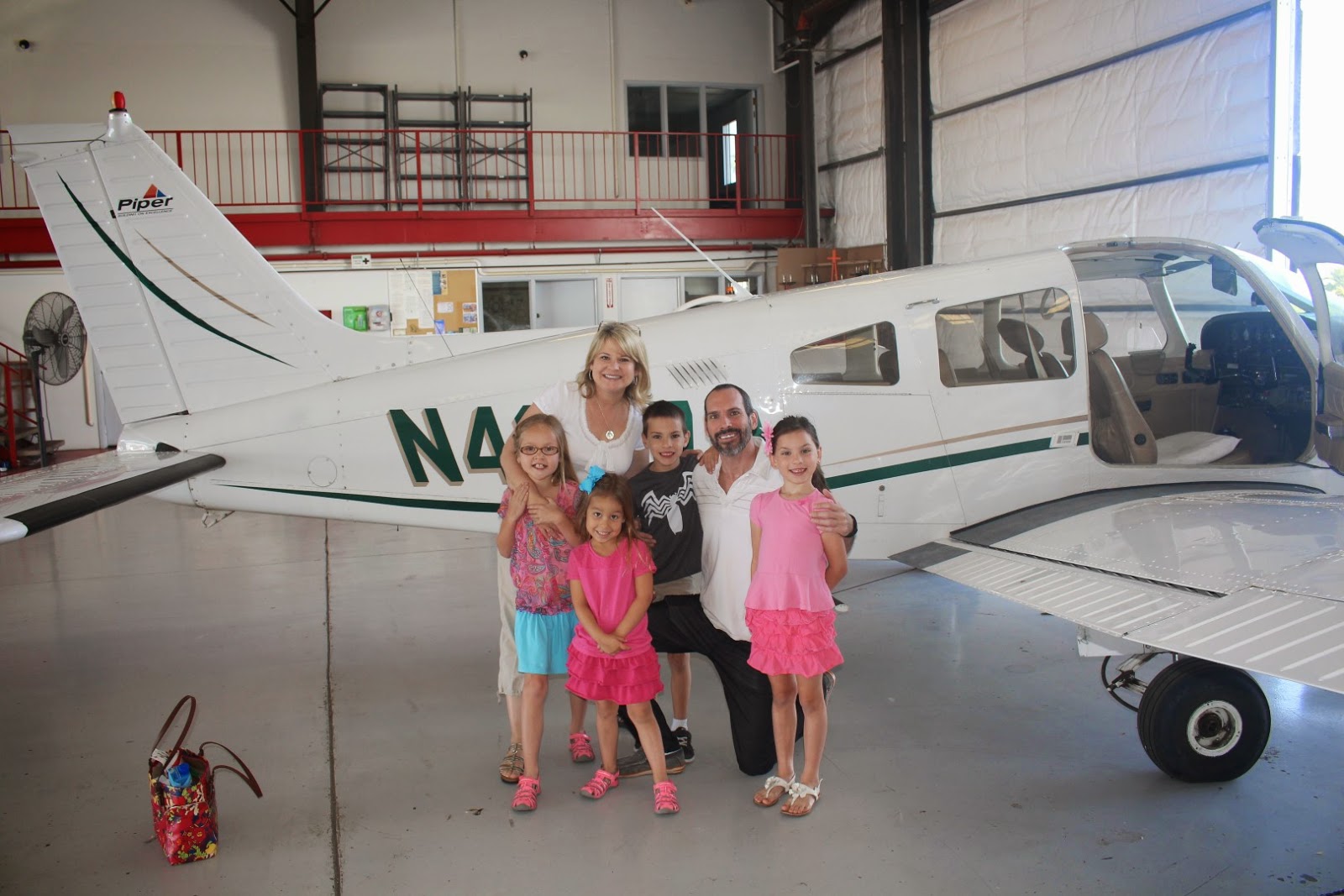 But our name was called over the loud speaker and we had four hungry kids ready for breakfast.  The patio where we sat was right on the tarmac.  Planes were starting up and taxiing away just a few feet from our pancakes. 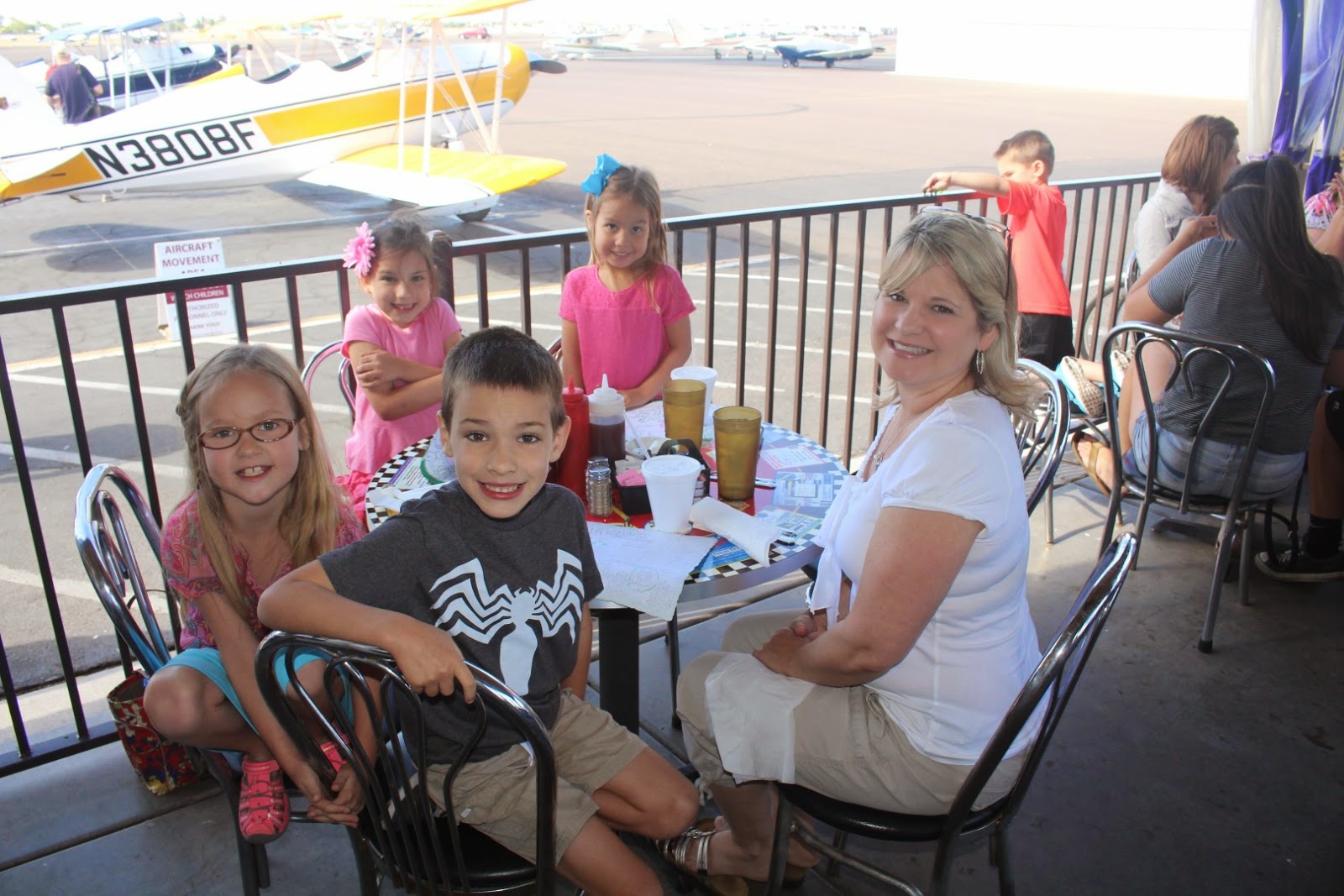 On our way out we paused to watch a small jet take off.  Easton is still enthralled by flight and space so this was especially interesting to him. 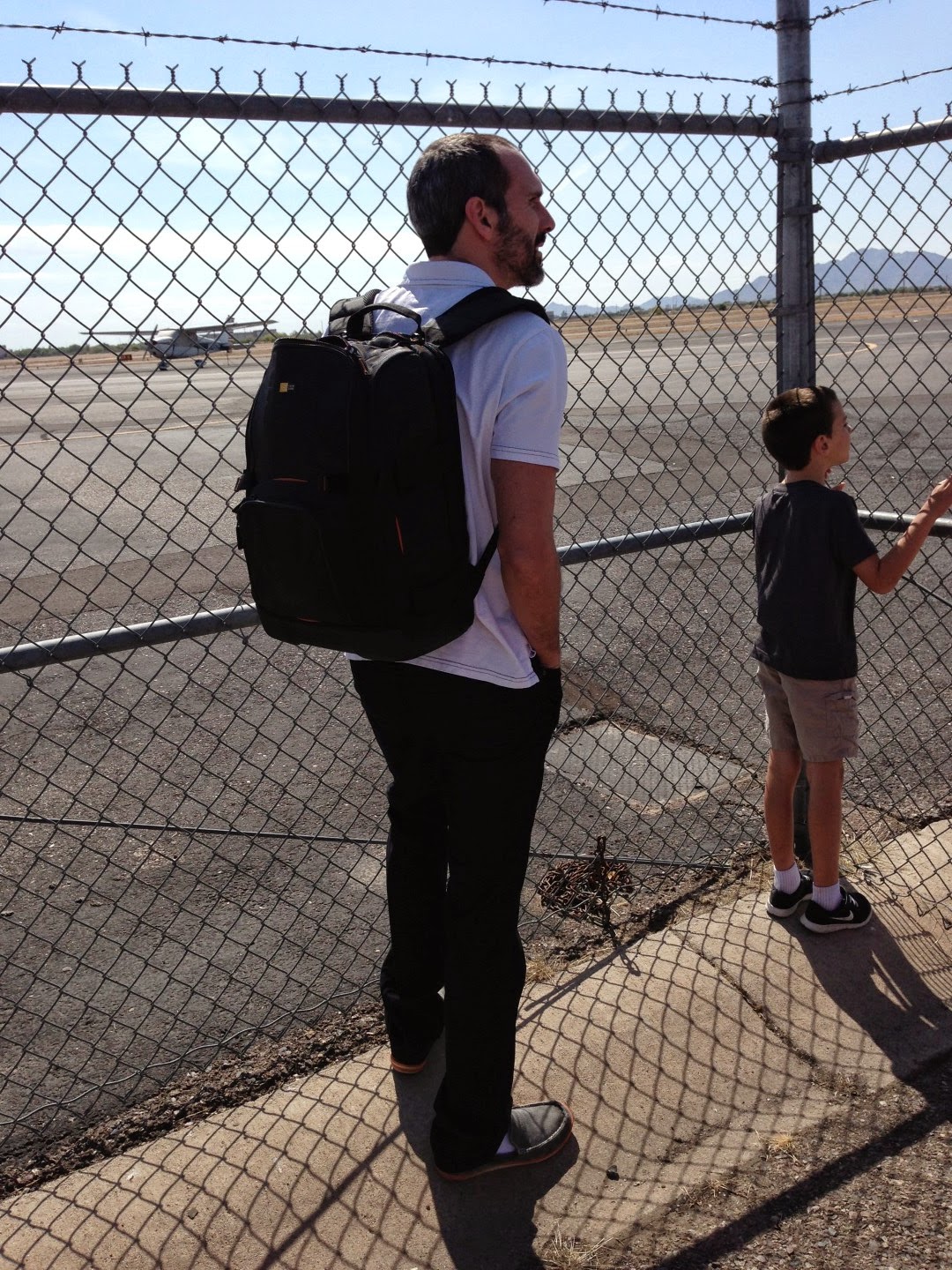 and probably the only picture of Joanie's trip to AZ with both of us in it was taken by Daphne as we headed home from the airport.  We are usually the ones taking the pictures, which is fine with us!  Her time here in the Webb house was fully utilized as she jumped right in to shuttle kids, clean up, play games, and even help with homework.  There is no job description for "sister", but she's gone above and beyond anything I could have asked or imagined when she offered to come out during this tough transition time with Kendra. 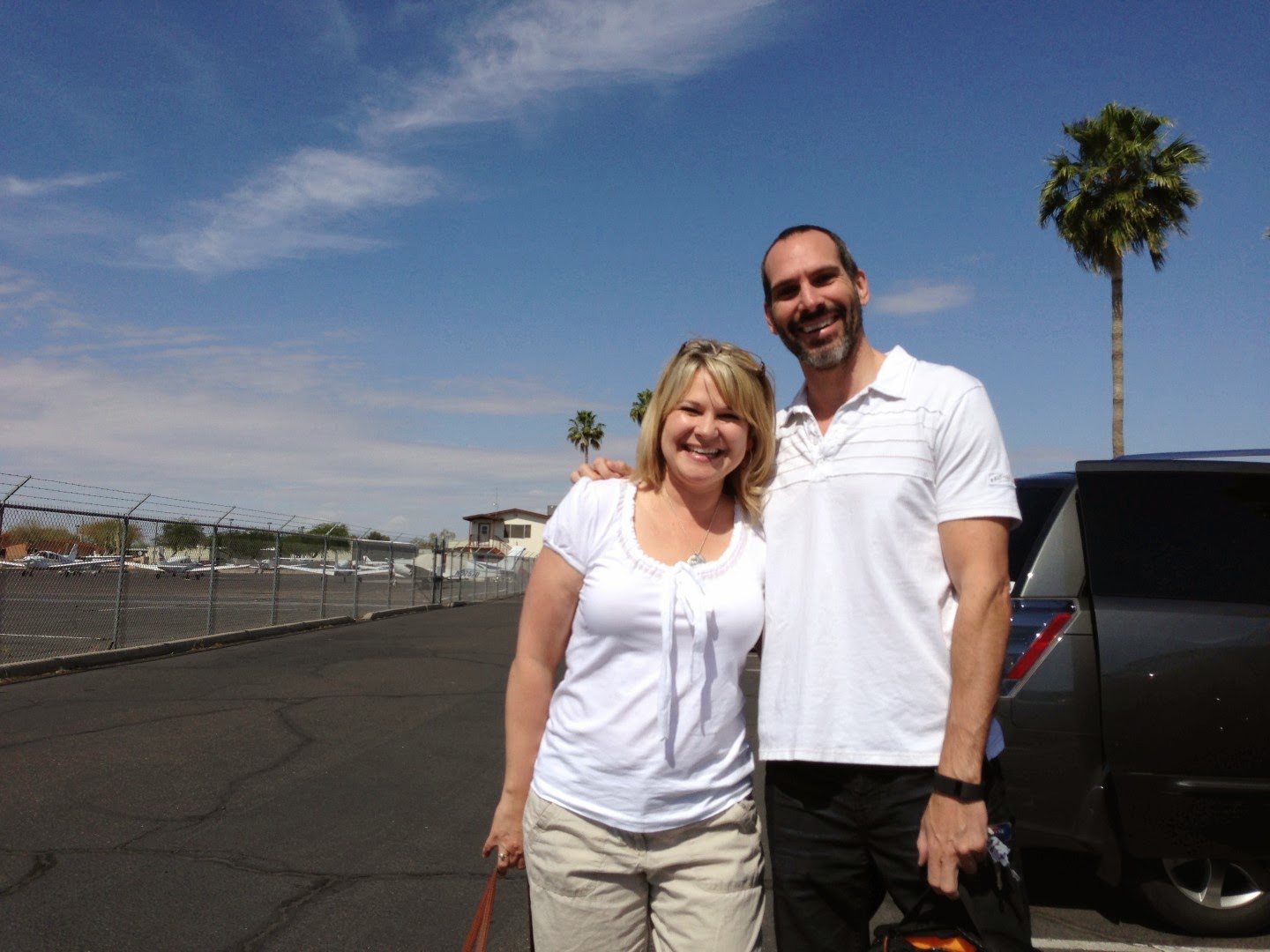 I've done a few uncle things during their visit, but haven't had the chance to spend much time with them because of the myriad of other priorities and commitments.  We've had a few moments though like when I asked them to help me pick lemons.  They stood back as I shook the tree.  Lemons plopped out of the tree and the girls were good helpers to put them in the bucket.  Their reward was fresh-made lemon curd, which was used on breakfast for the next few days. 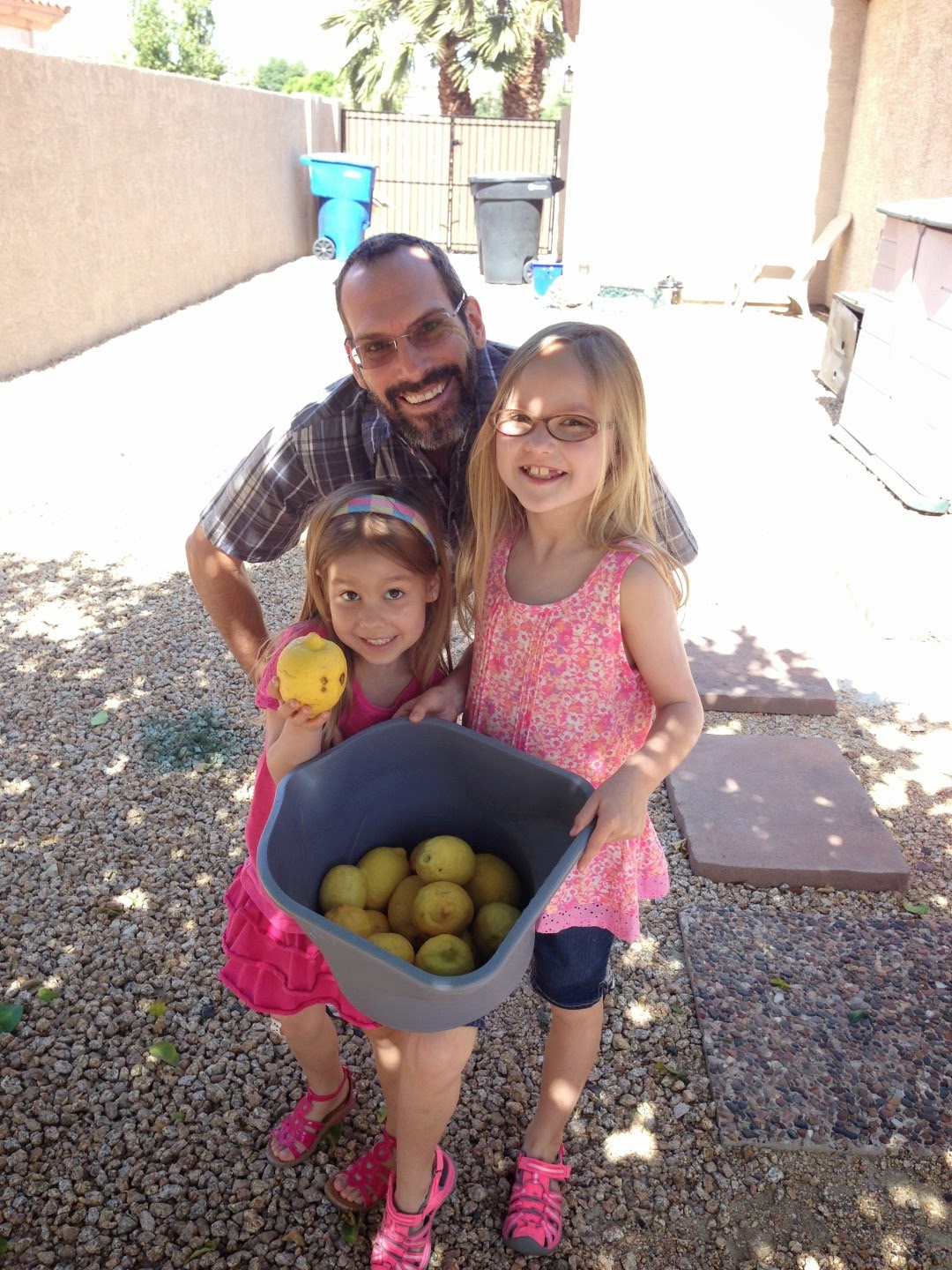 Easton and Layla are influencing Daphne and Trinity.  Most times for the better but sometimes the twins expose their cousins to things I'd rather them not do.  Making soap bubbles at the kitchen sink is not the worst thing in the world, but it will lead to more messes for Joanie to clean up when she gets home. 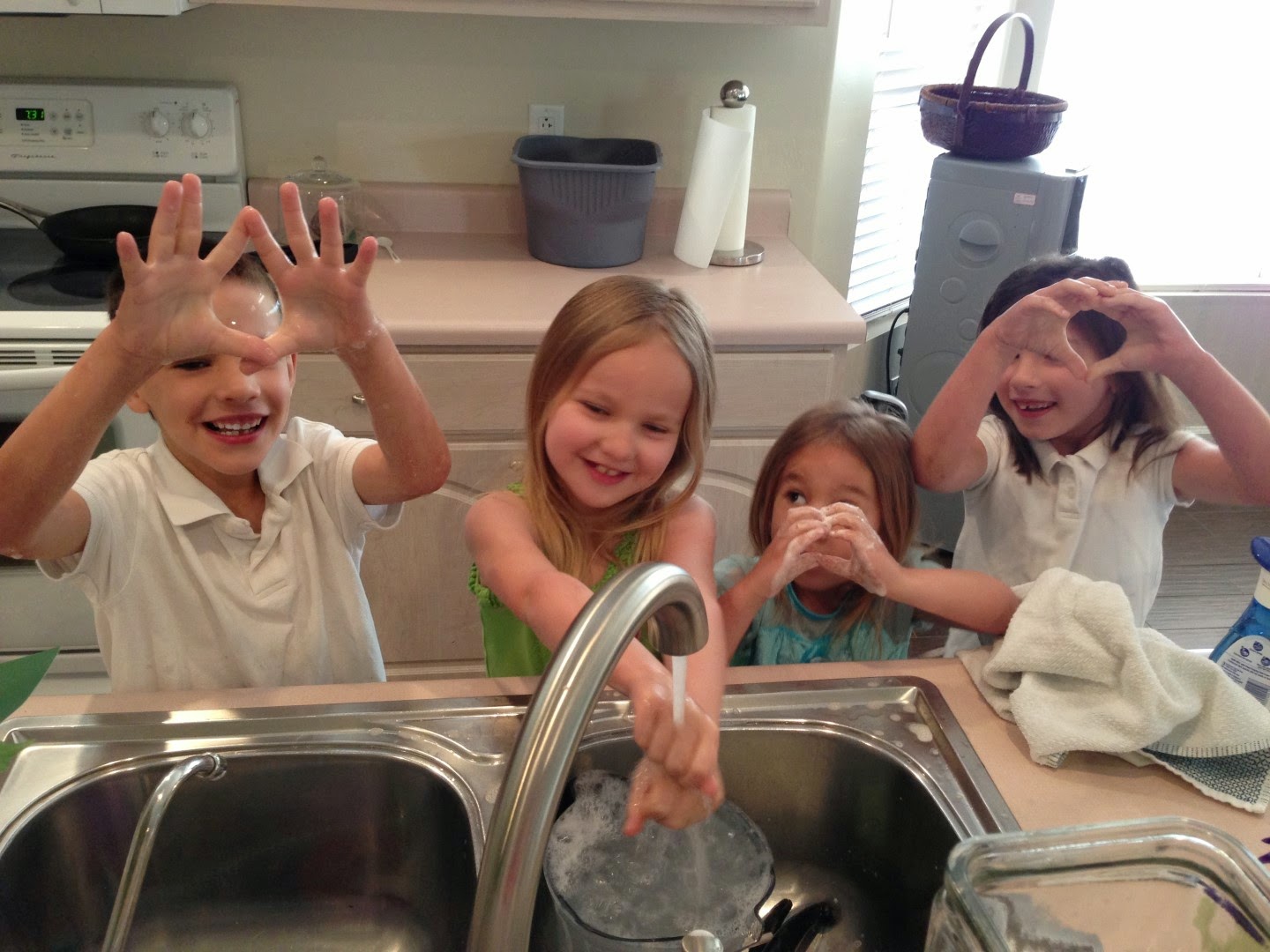 Layla's proudest moment was probably showing off her ice skating skills for her cousins.  They watched as she twirled around the ice skating rink and cheered each time she waved while passing by.  She might be a little too proud because she's leaning towards bragging and haughtiness when it comes to her ice skating skills. We'll have to keep an eye on those seeds to watch how she grows. 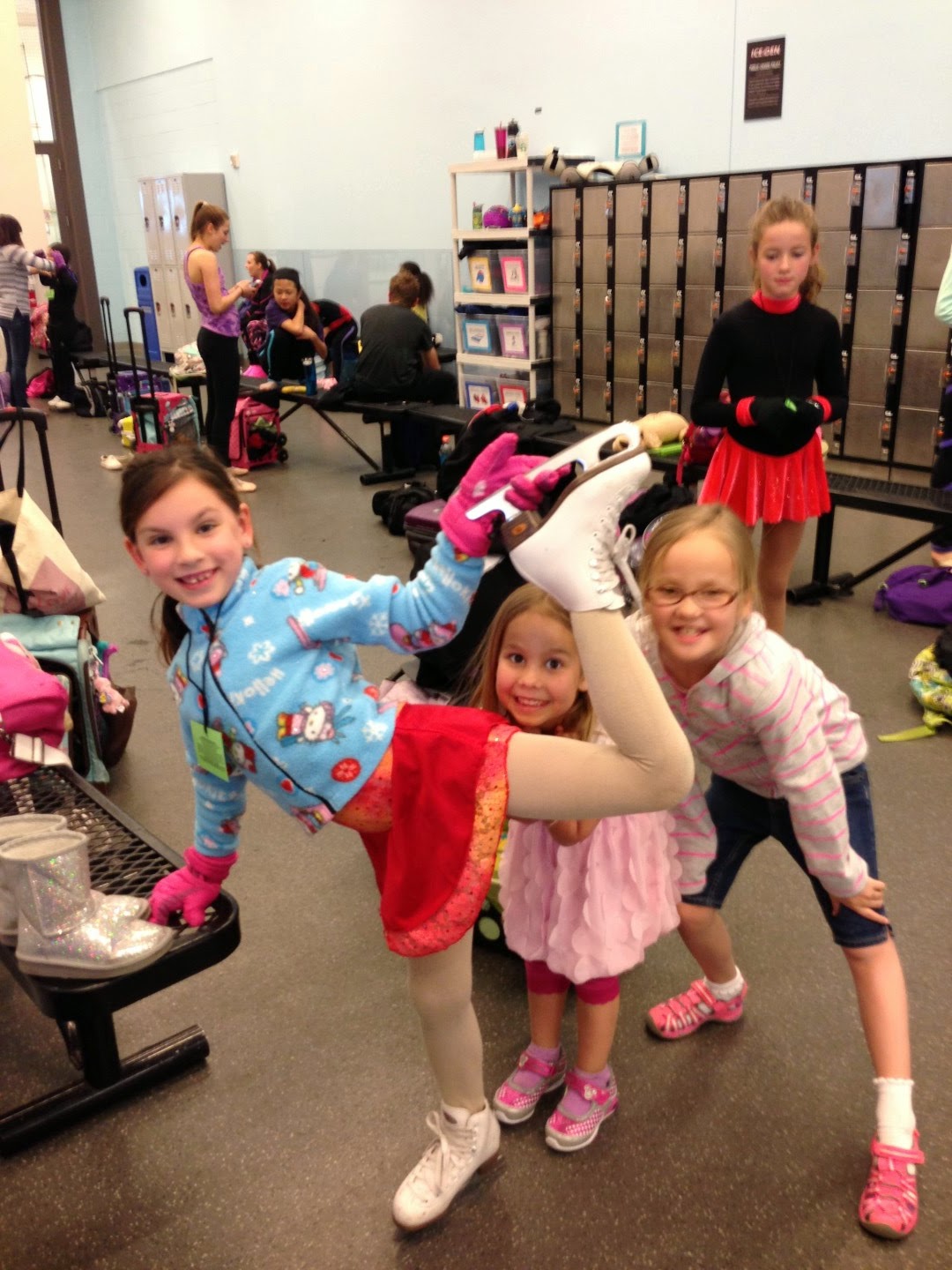 Bed time includes reading and songs when Aunt Joanie is involved.  I'm more than happy to give up that part of my nightly routine for a few nights. 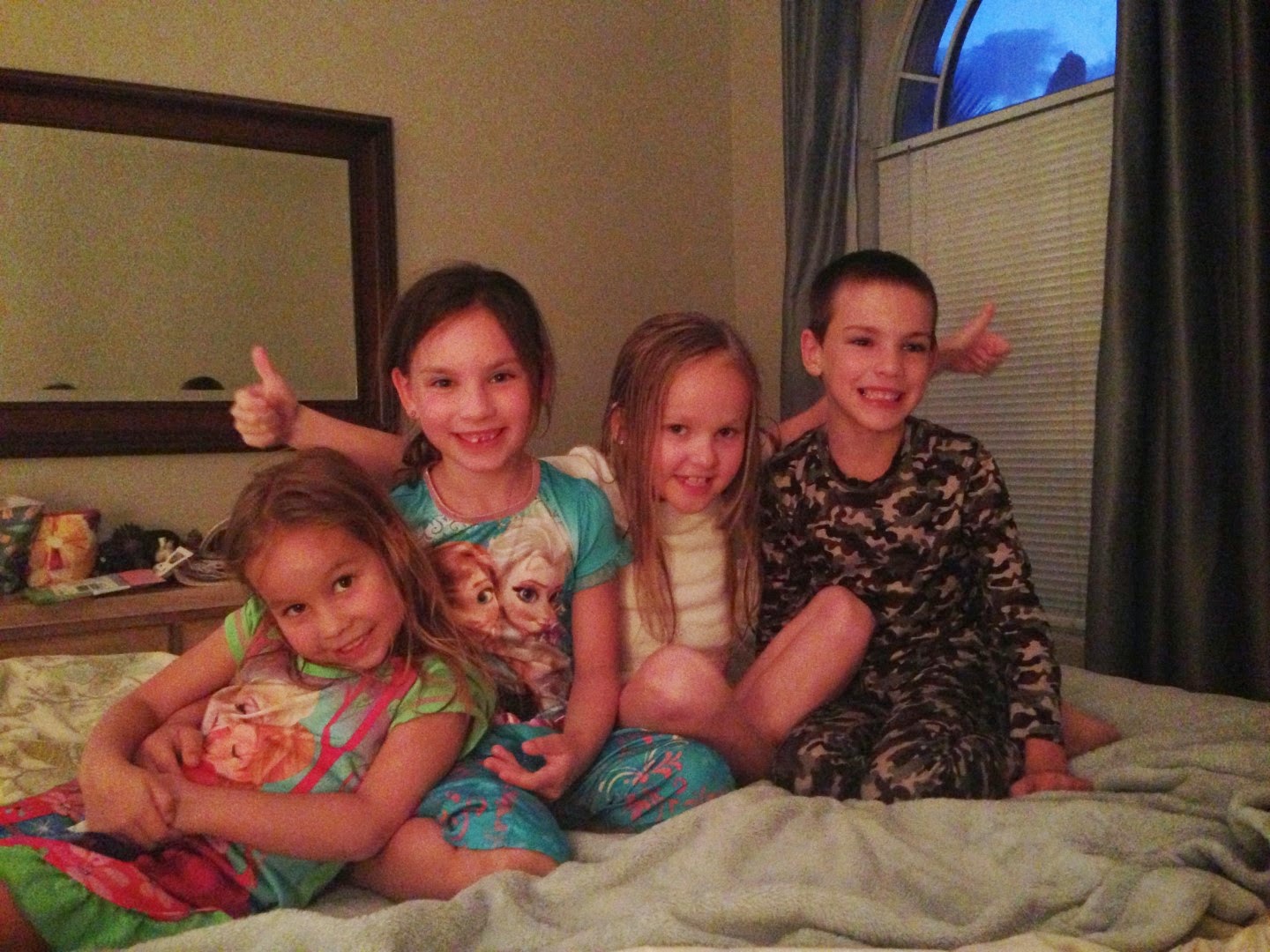 I'm not sure how Joanie convinces everyone to pose so well, but I'd like to learn her secrets to photography. 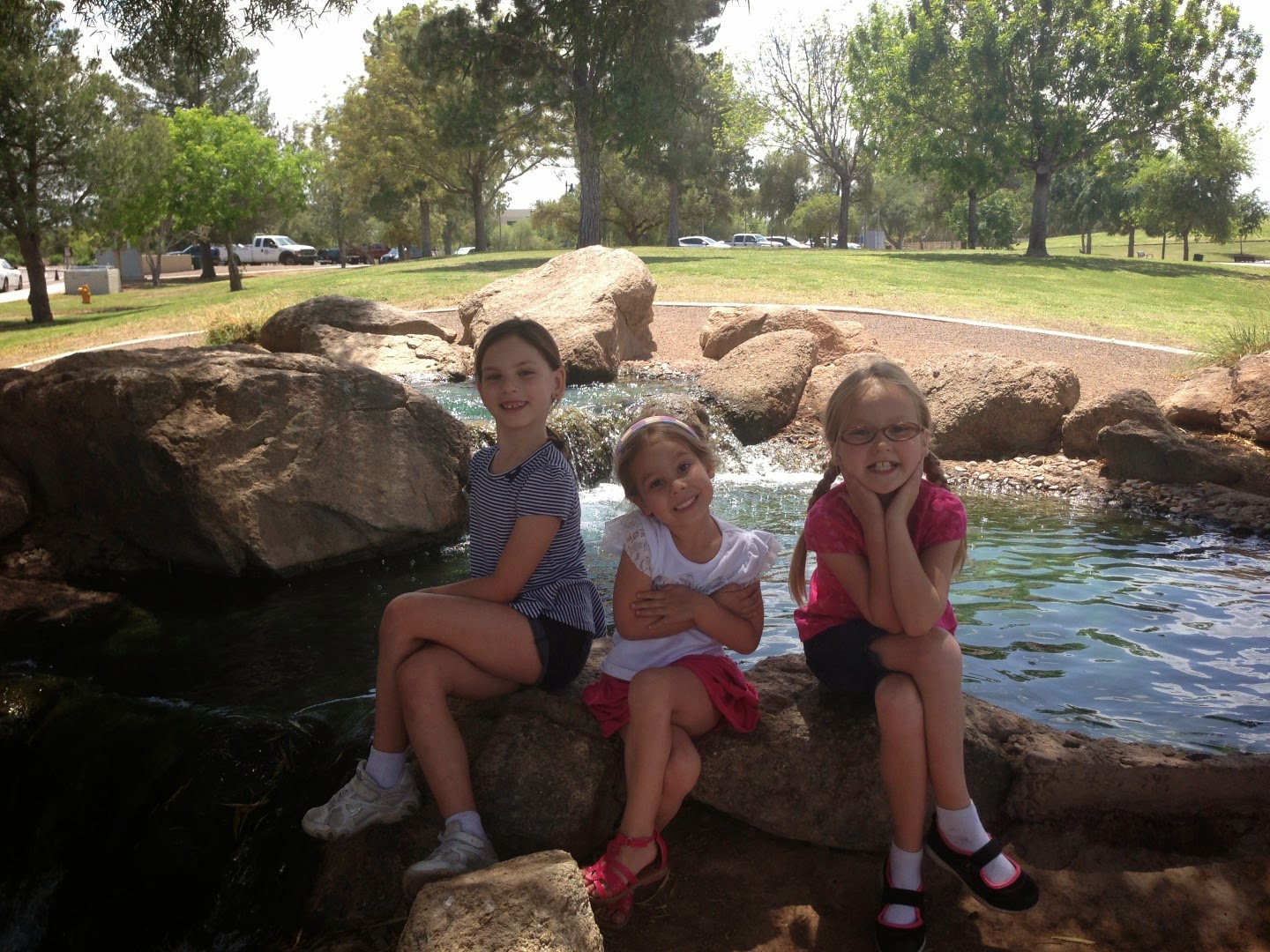 This time of year includes many hours at the park because we are between the chill of winter and the blazing sun of summer.  My twins are very knowledgeable about every park within 5 miles of our house.  Layla is a star everywhere she goes. 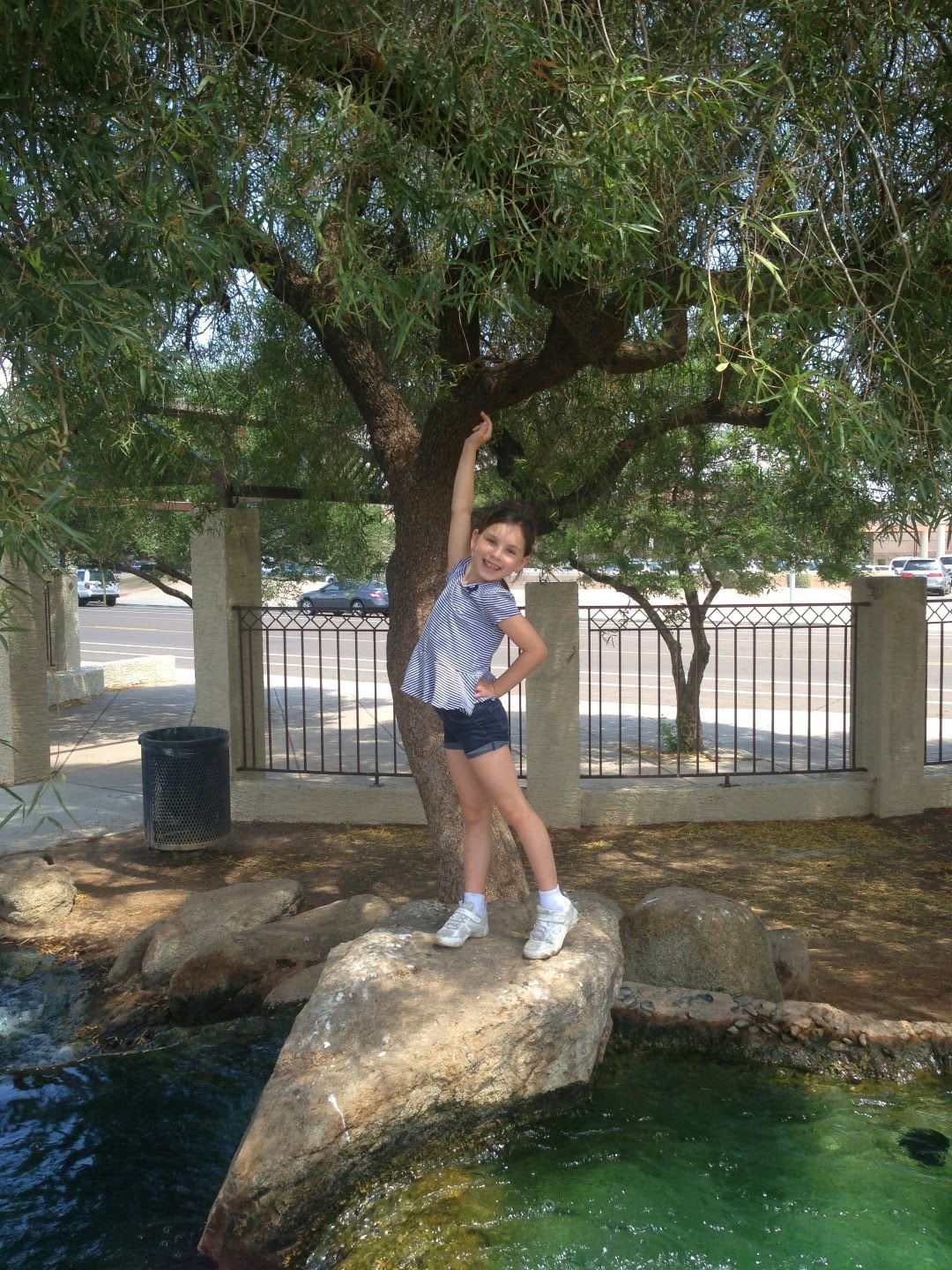 Joanie treated the kids with a trip to the Butterfly Wonderland.  The four of them fit nicely on this butterfly bench inside the conservatory. 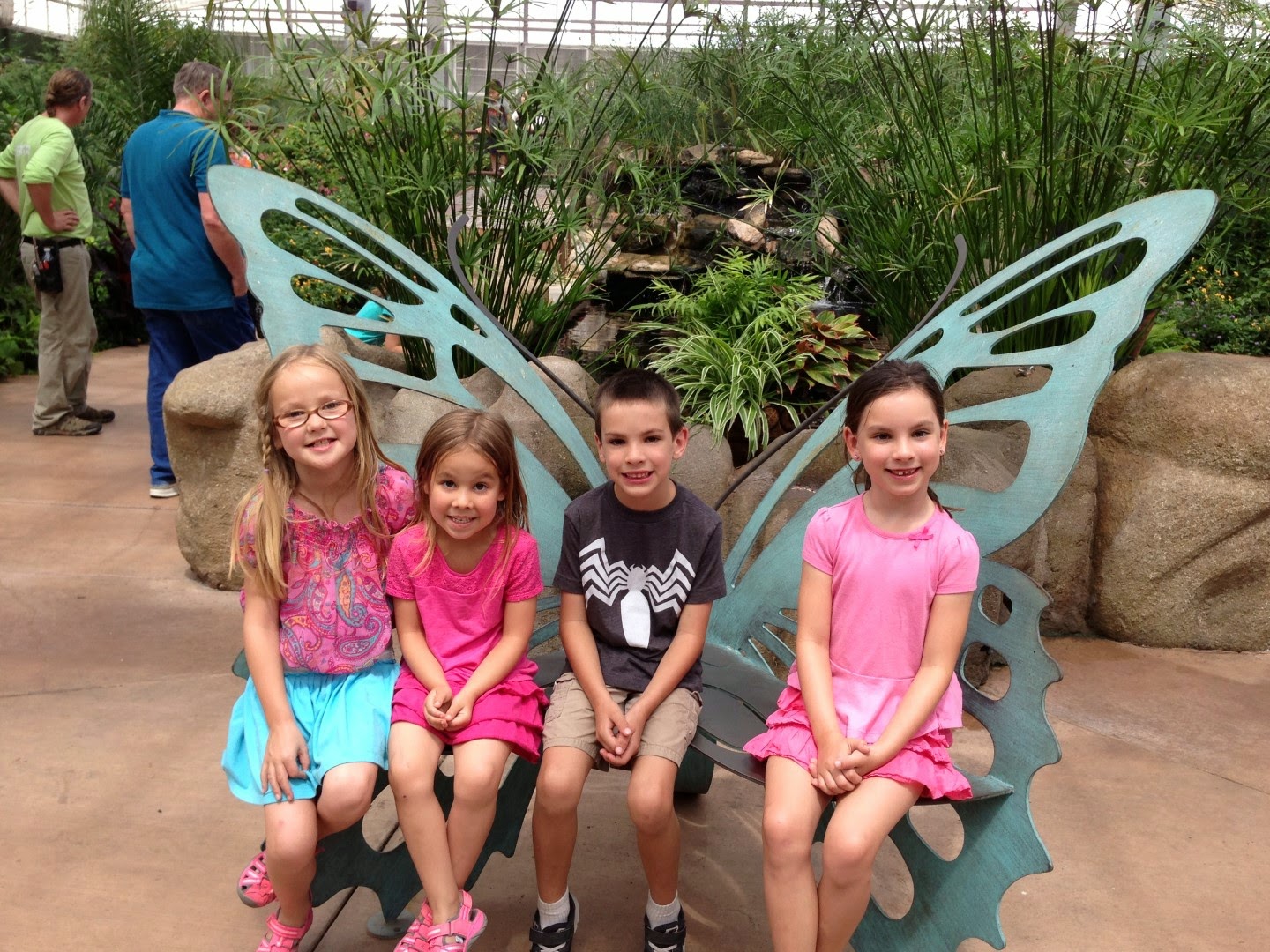 Easton made a butterfly friend who sat comfortably on his shoe for about 15 minutes.  This was the highlight of Easton's day. 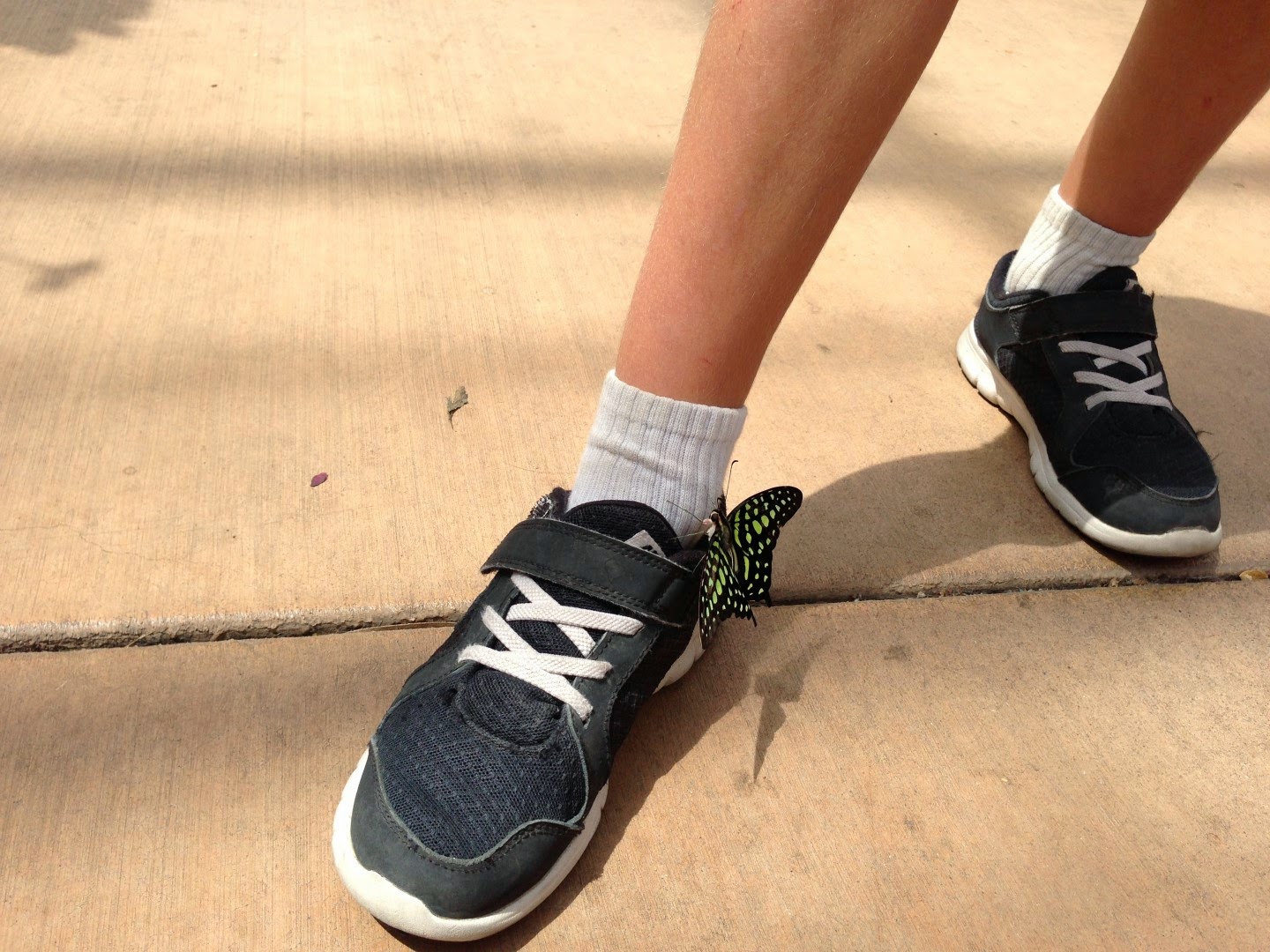 Layla held still long enough for a big butterfly to land on her finger.  I wish I could have been there to watch her expression of joy as this happened. 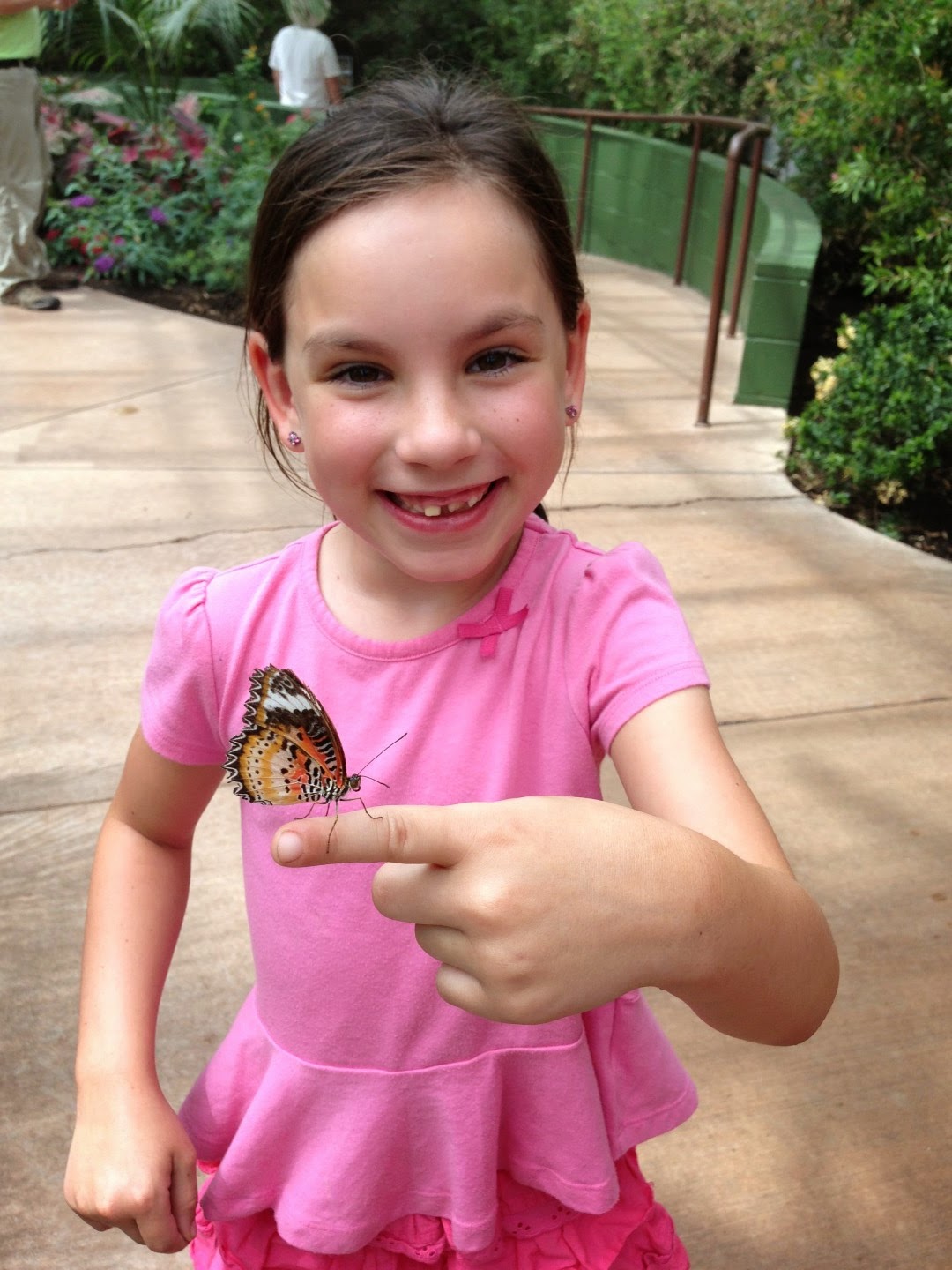 Joanie became the undisputed favorite aunt this week. Partly because of the awesome adventures, but mostly because she is so loving. 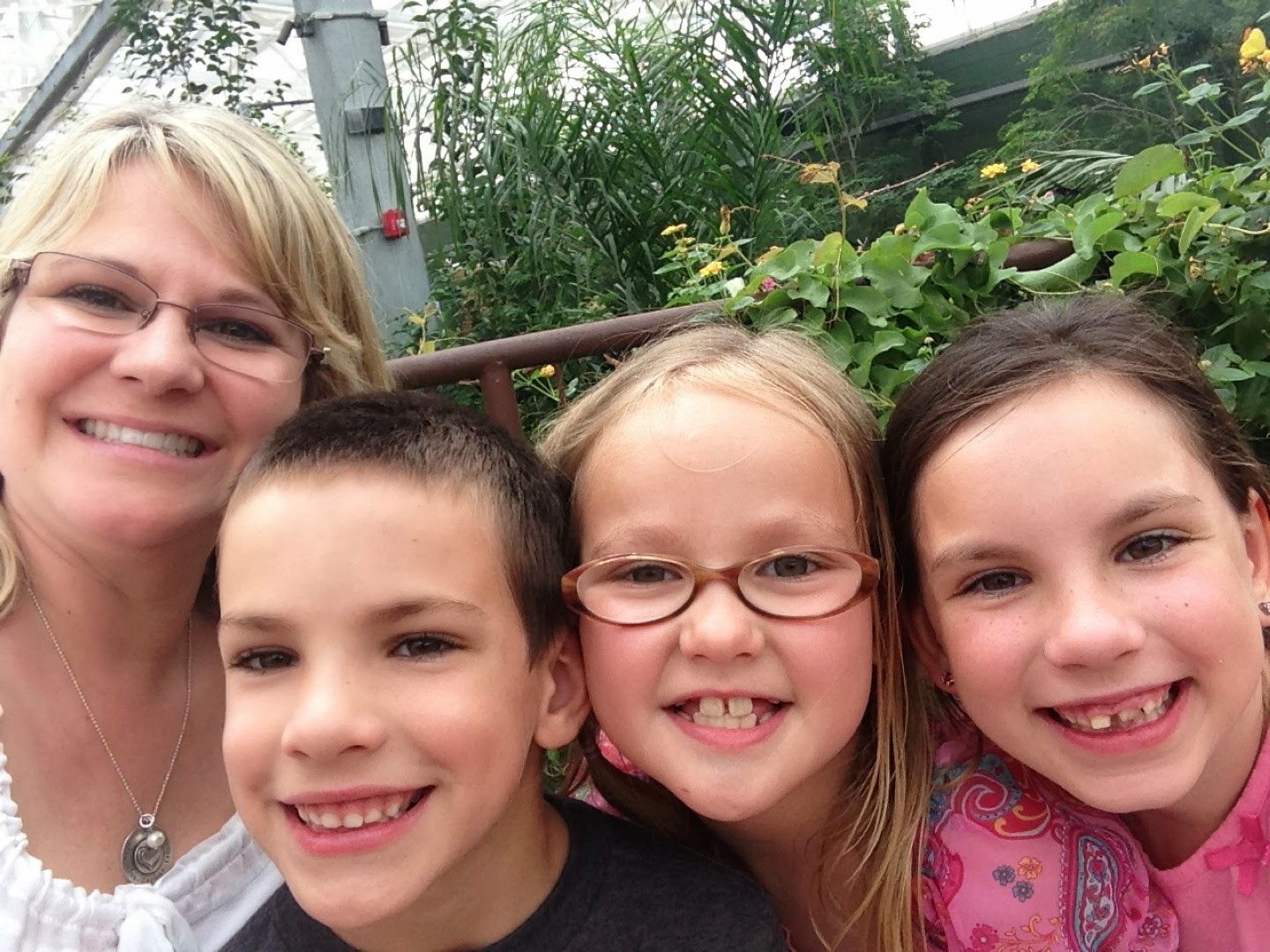 The pool is a few degrees too cold for my twins.  I heated up the hot tub a few degrees to make it tolerable for the kids to enjoy without their lips turning blue.  My plan to just get my feet wet didn't last long with those water guns around... 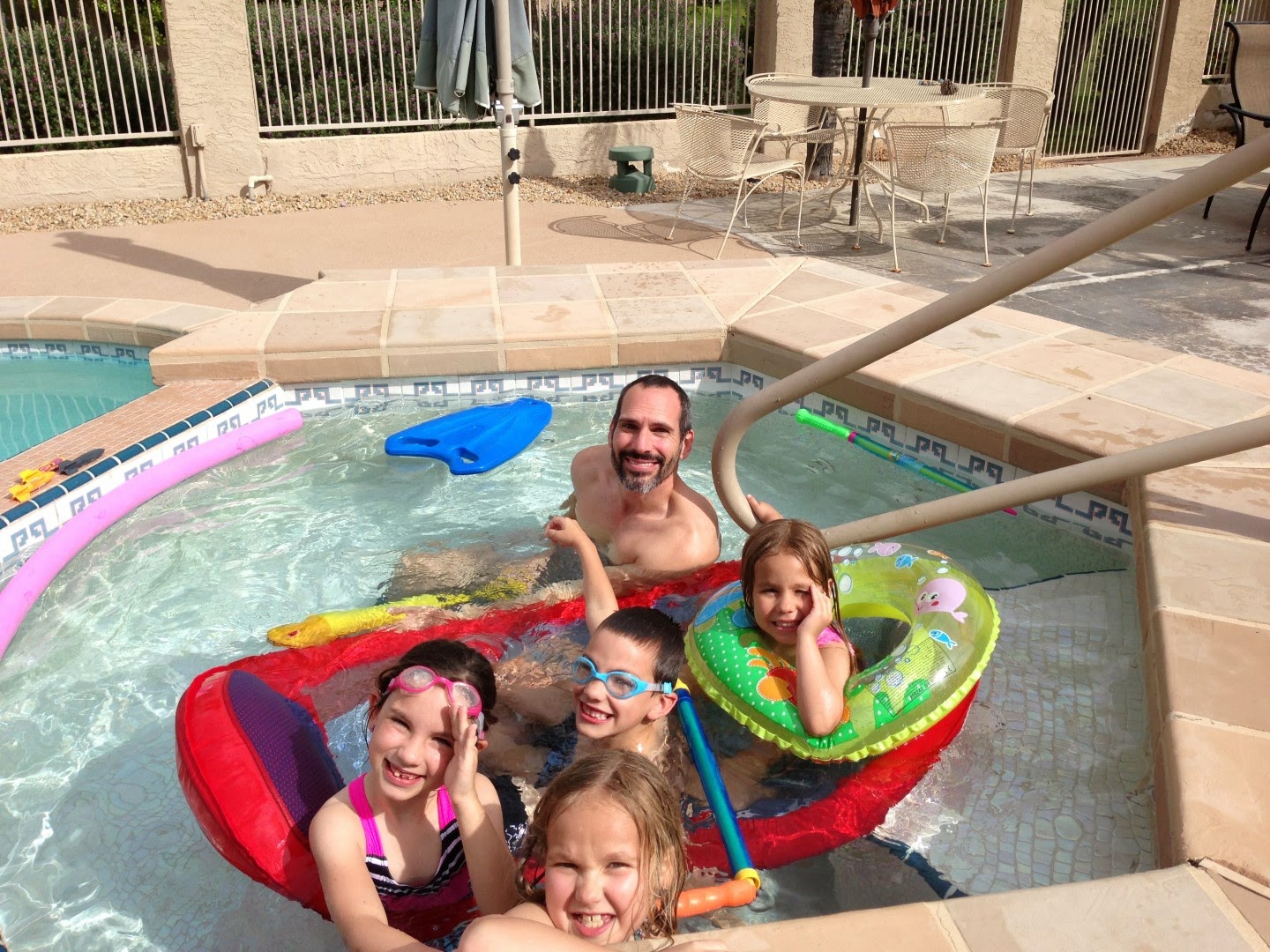 Easton's favorite restaurant is Firehouse subs.  This is also Layla's least favorite for unknown reasons.  Easton was happy to introduce his cousins to the sandwiches, pickles, and free hats. 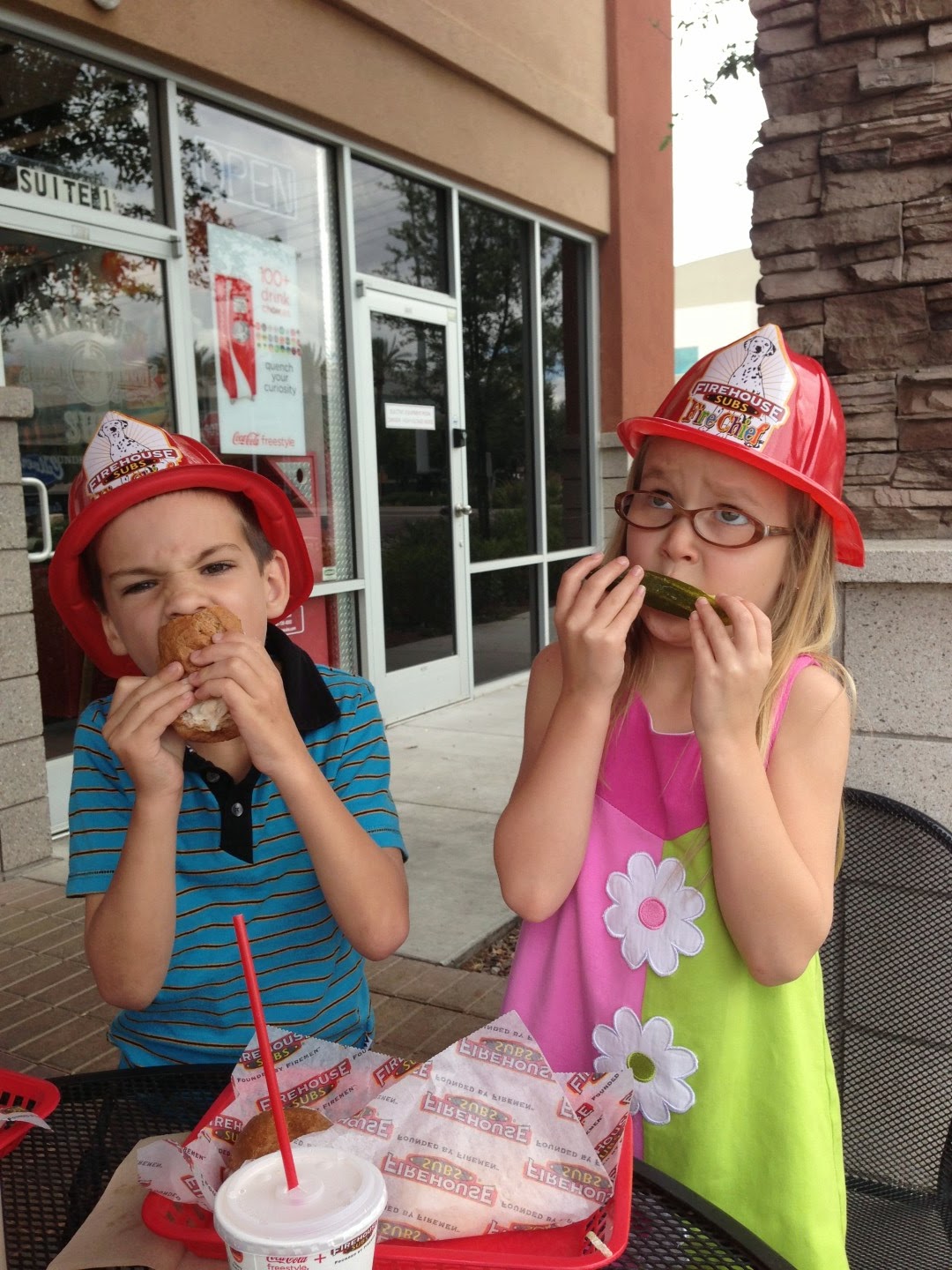 The Firehouse trip was Sunday after church.  Layla would be happy to wear her fancy dress and tiara almost anywhere, but these were considered "church clothes" this day. 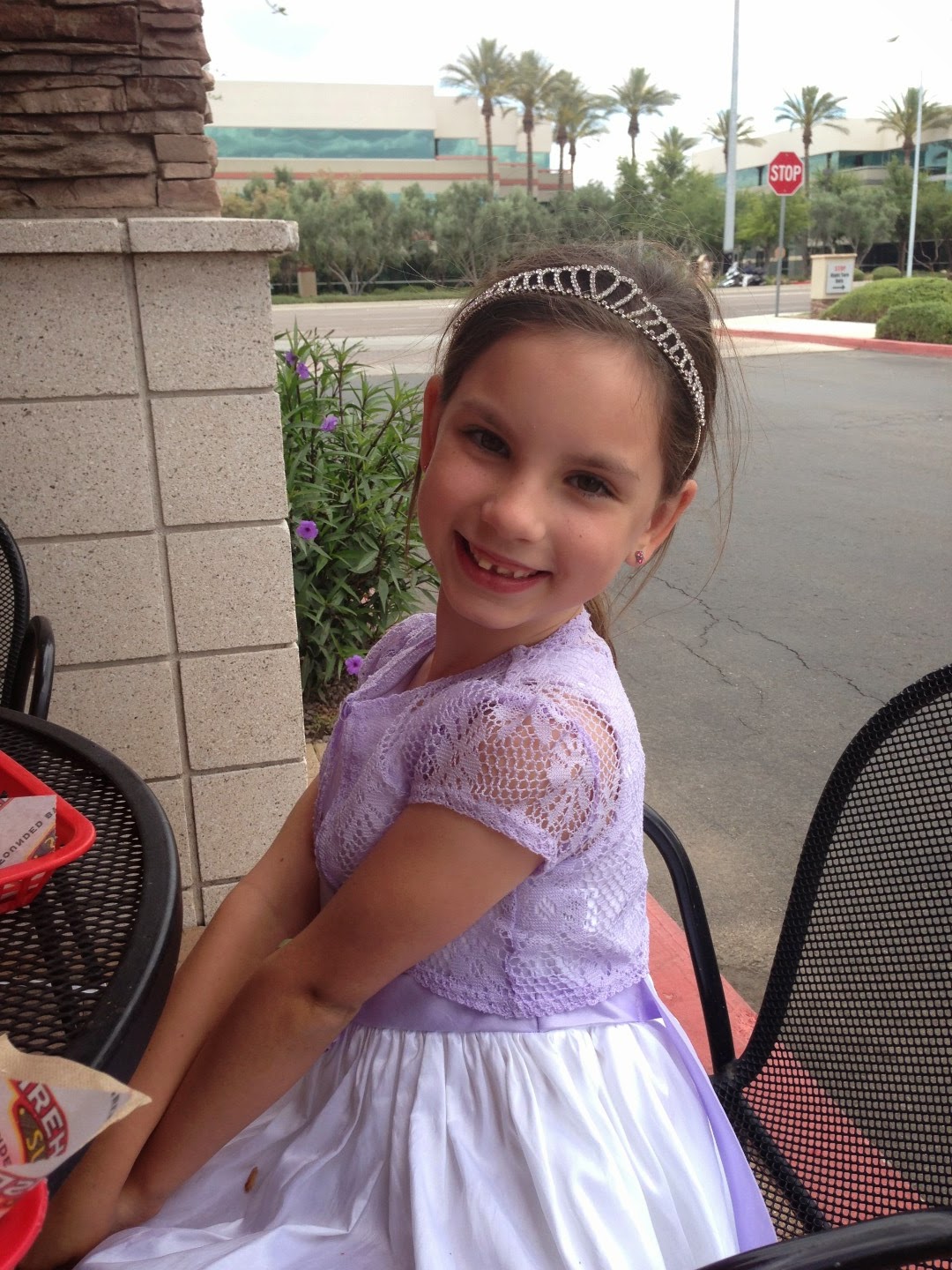 What fun would a cousin trip be without board games?  We have a closet full of games from the past few years.  Most of which are standard issue for every household in America, like Battleship and Jenga.  We also have some new ones like "beat the parents". 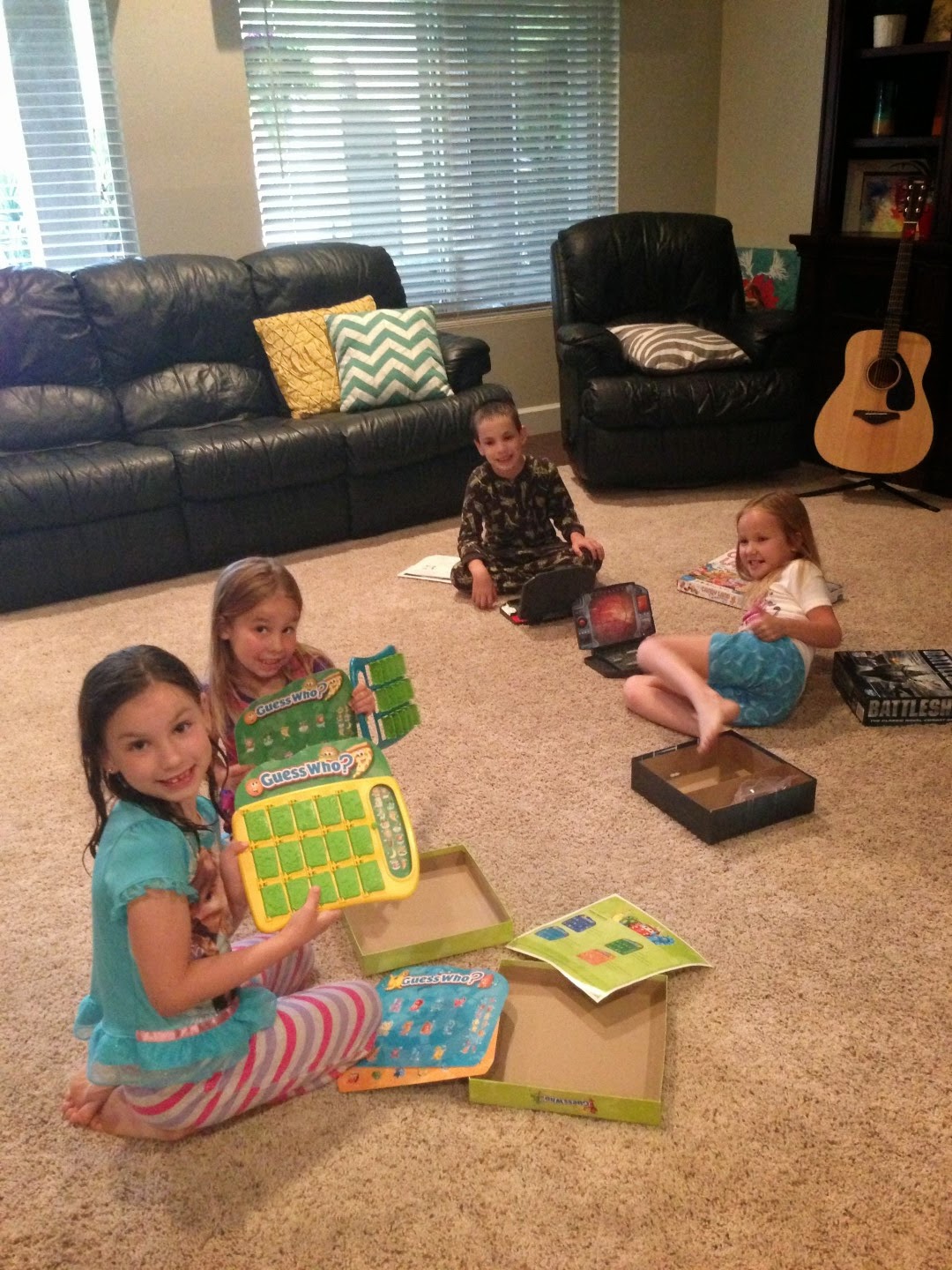 During all these adventures Kendra is conspicuously missing.  Not because she was lying in bed every minute of the day, but because she was doing what she does best:  giving to others, being a blessing, and leading ministry.  I'm still waiting on pictures.  :)

All the pictures and adventures with the cousins will be special memories for them all to cherish now and in the future! Love to you all. Miss you much and of course Joanie and the girls.