These past few weeks were incredibly challenging and difficult to navigate.  Every day was uncharted territory.  Many decisions were made without a full understanding of the data.  Even so, life goes on for the world around us including the twins.   I have about two weeks worth of pics and stories, but I can't figure out how to catch up all in one post so I just gave myself permission to start fresh.  I'll stick to the past two days.  The word of the day for us is "perseverance".

Easton and Layla have been in golf lessons for a couple of months.  Every Friday I take them across town where they learn the game of golf with about 20 other kids.  They have never played a real game of golf during their time of practicing on the driving range and putting green.  That is, until Saturday.  Part of the golf lesson package is a free day of golfing.  I packed up the twins and our golf gear with all the excitement and hype I could muster because I want them to have a positive experience on their first round of golf.  They were excited even more than me. 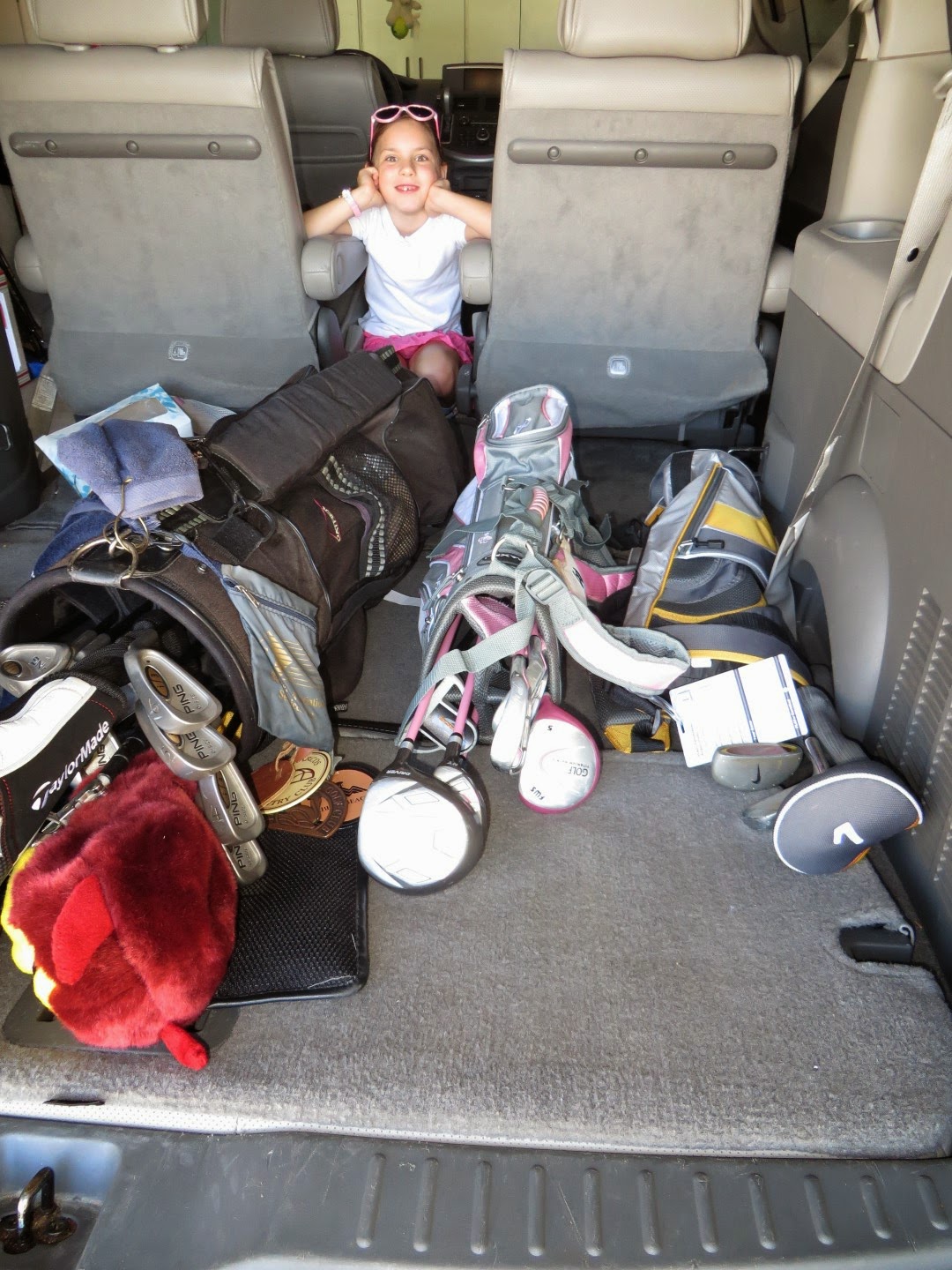 We arrived at the perfect time to jump onto the first tee box and play without being pressured to speed up. 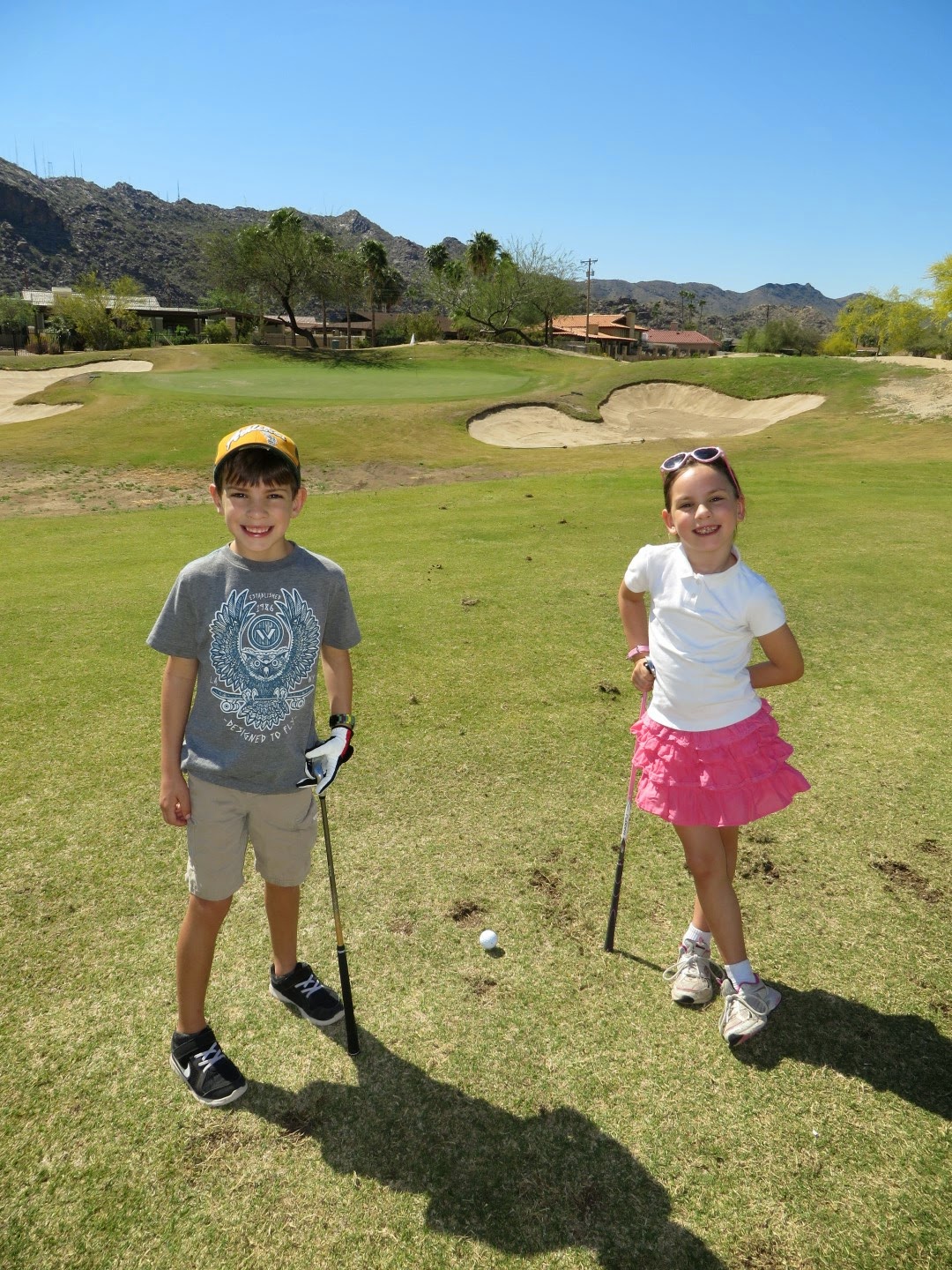 Easton had one par on the 9-hole executive course and lots of bogeys.  At the end he said, "Dad, you and I should be called 'the bogey boys'". 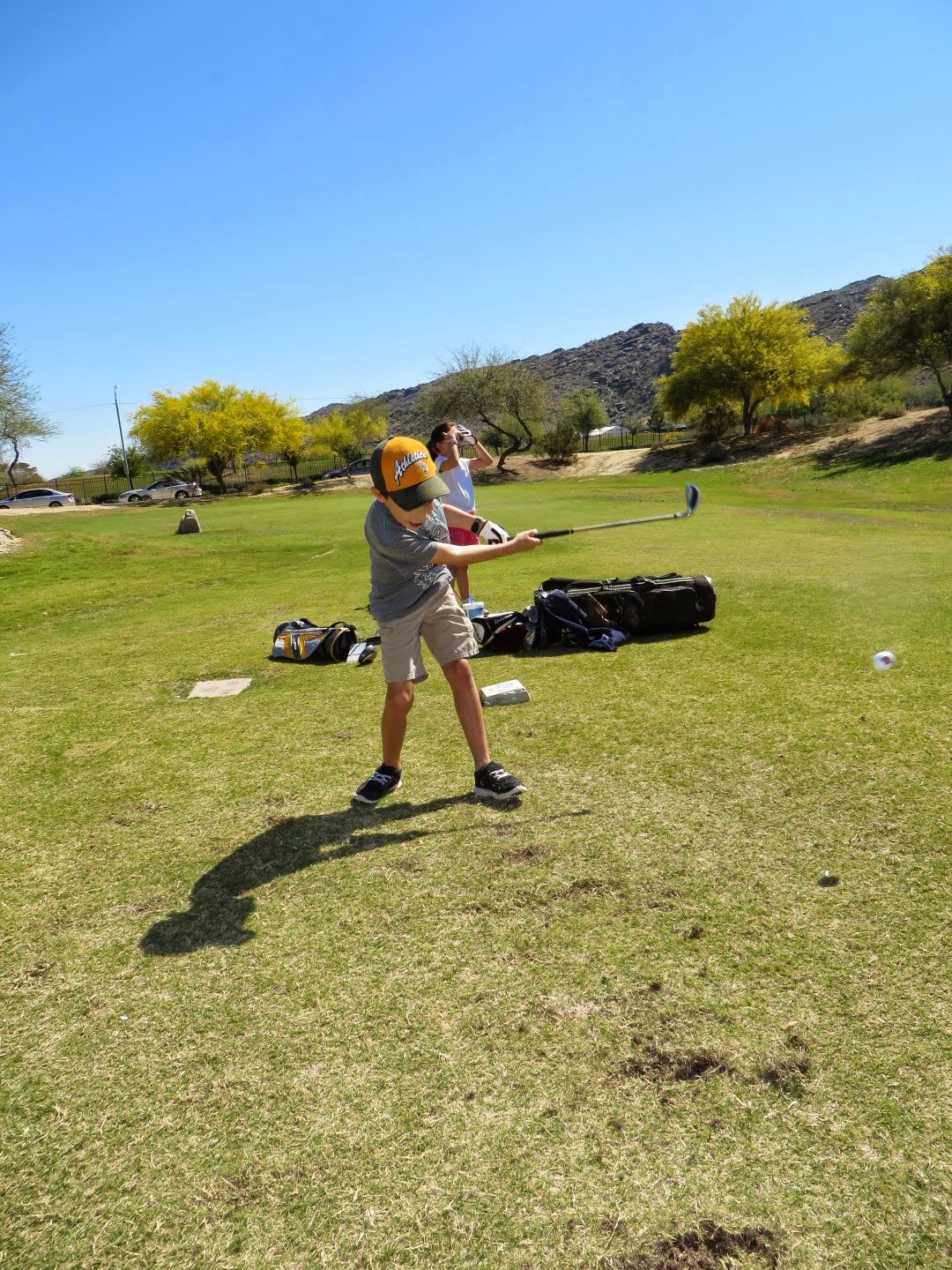 Layla's clubs are a bit too long, but she'll grow into them.  Her form is lacking, but she had fun and learned a whole bunch about etiquette on the green.  She wanted to quit after the 7th hole because it was a little hot, but we finished all nine holes and persevered! 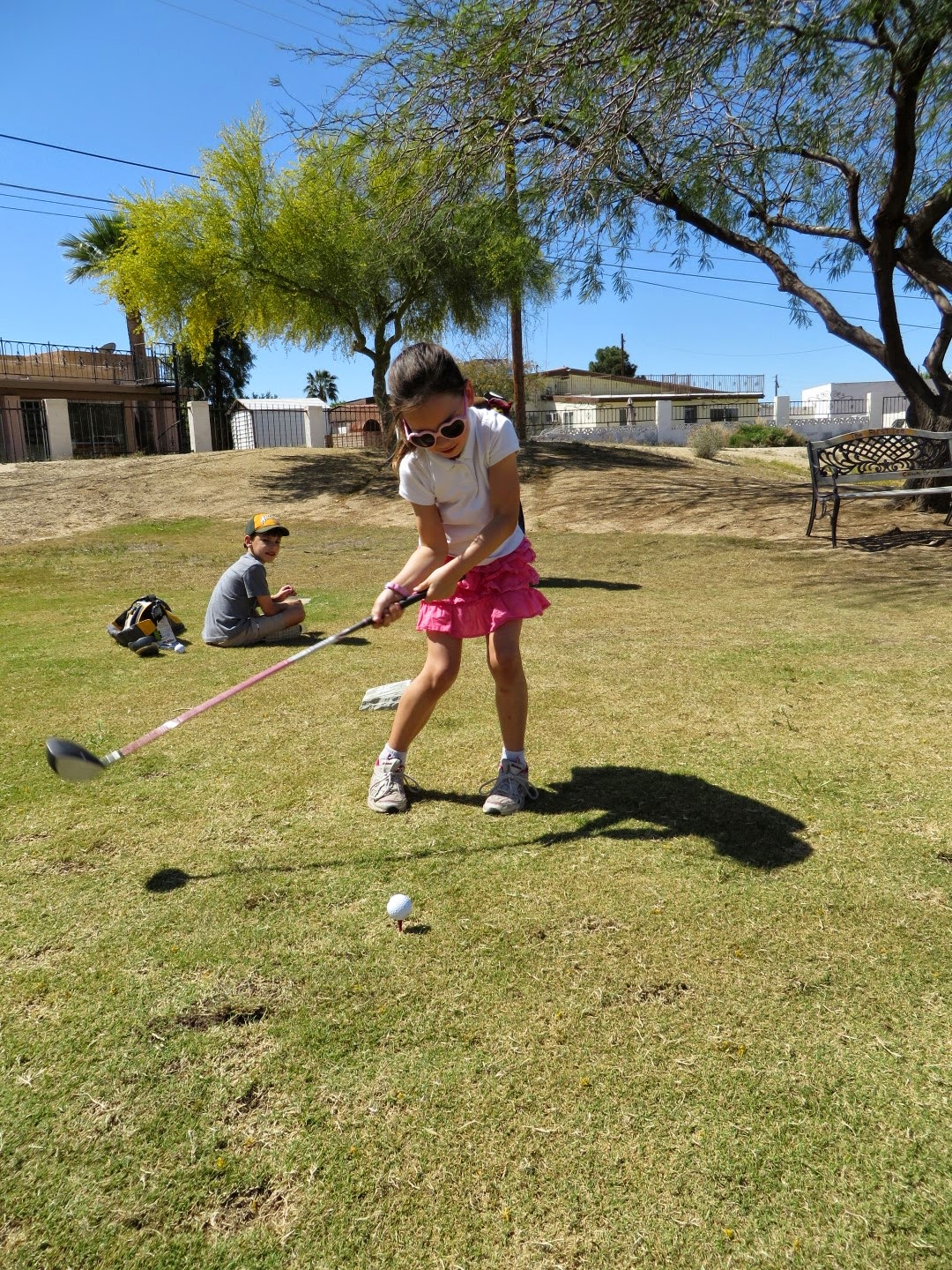 Proof we made it through their first round of golf together.  We persevered! Nobody was injured and there were plenty of memorable moments.  Ever since the twins were born I had visions of doing things like this with them.  The golf outing was 7 years in the making and it was as rewarding as I've been dreaming. 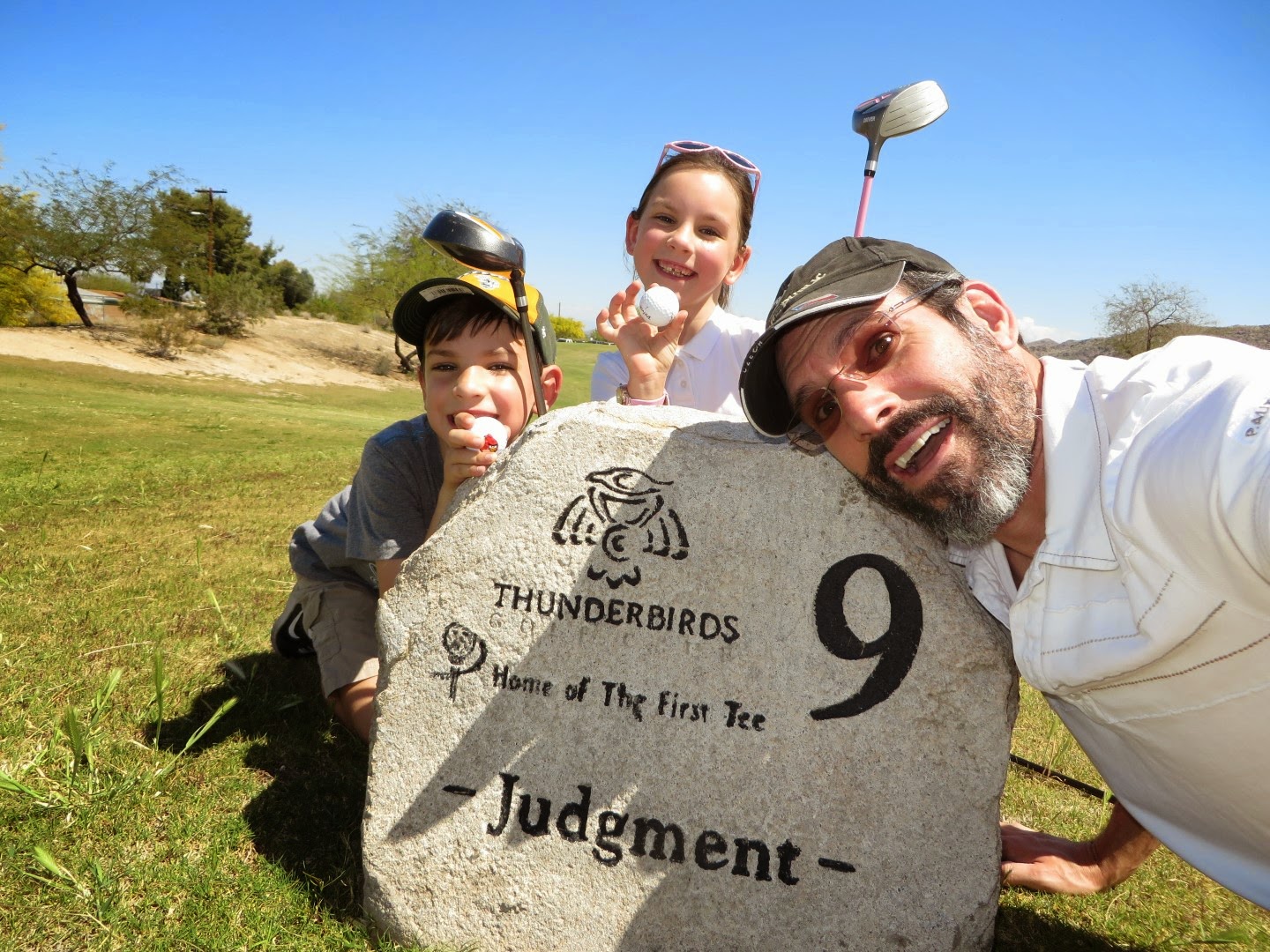 On Friday afternoon I took the twins out for a rock climbing and hiking adventure.  We traversed the side of the mountain and found the bat cave again.  I think we are supposed to stay on the path and where we went is considered off limits, but there no signs saying, "stay on the trail!"  The rocks we climbed on were probably a little more dangerous with exposure than I prefer, but they did great with following directions and being safe.  I told them to give a mighty bear face and this is the result. 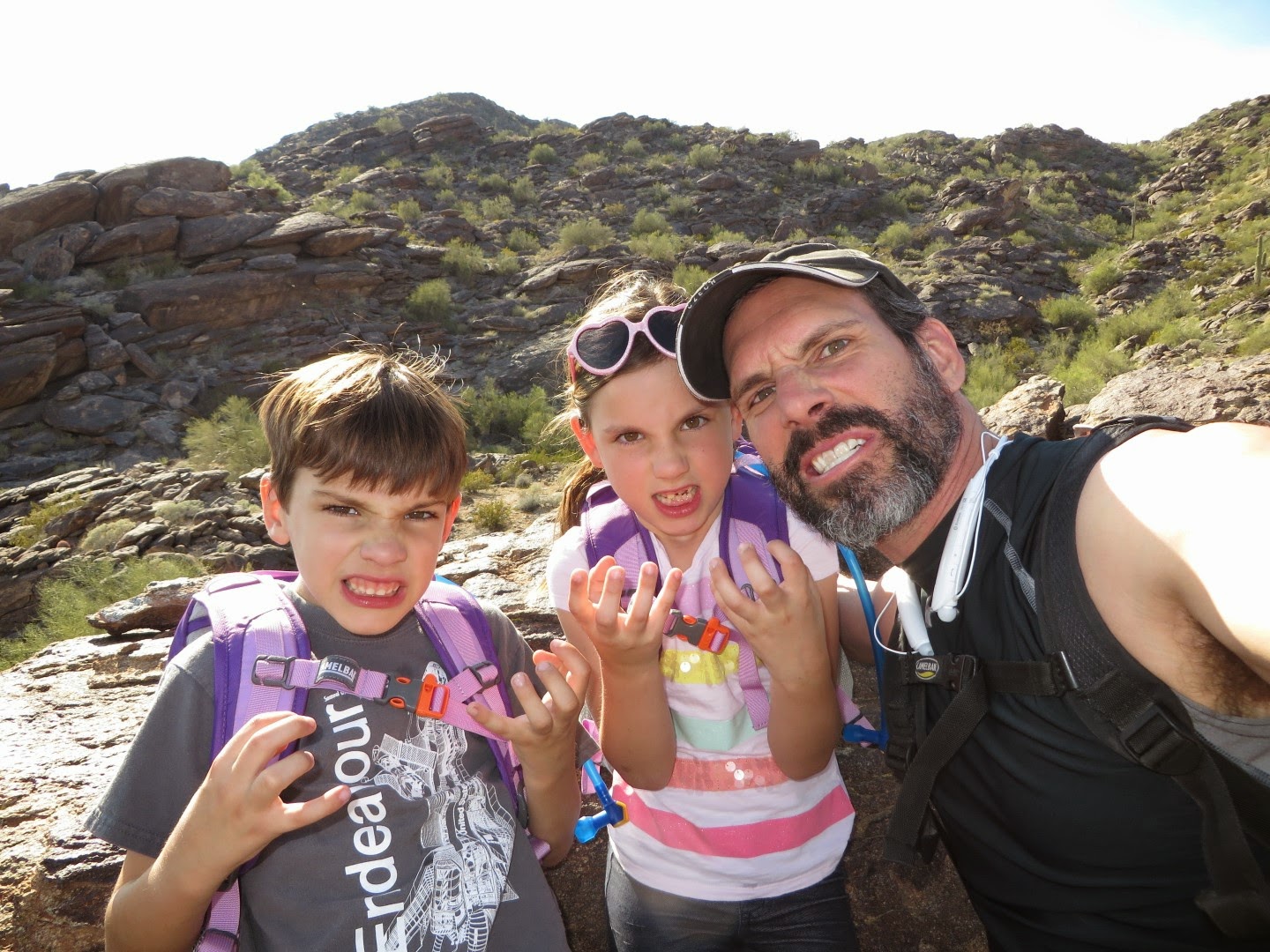 The difficulty of climbing we did is hard to describe, but this picture shows what "scrambling" is.  the rock pile behind them is where we climbed after this picture was taken.  We had to find ways up and over different rock formations like this.  Two fun-filled hours of climbing up, across, and down the mountain.  Our goal was to find the bat cave again and didn't stop scrambling until we rediscovered it.  We persevered! 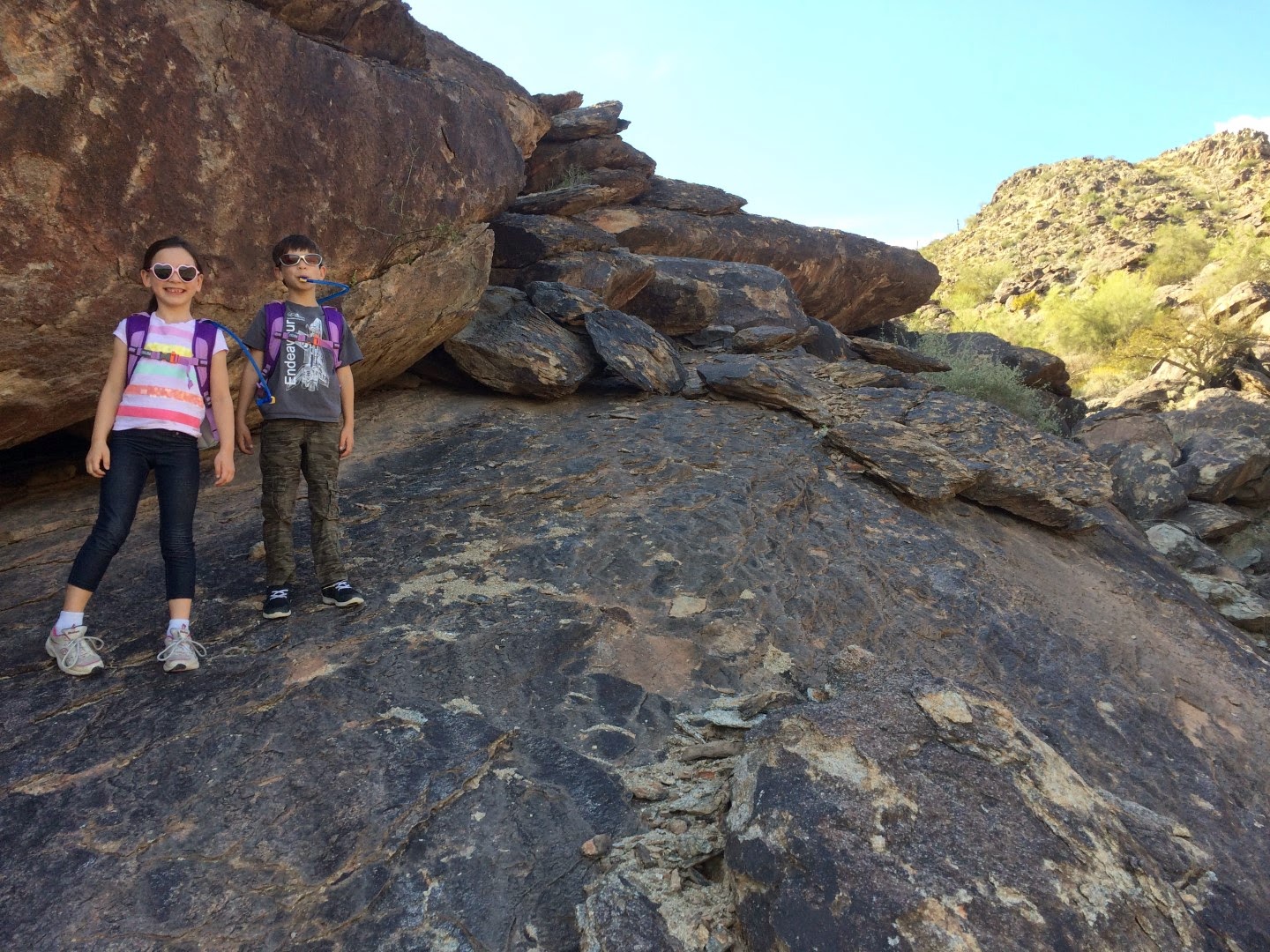 I remember book fairs as a kid, but I thought those went the way of the dial-up modem.  Not true.  The twins took some of their own spend money (hooray) and bought a few books at school.  Easton chose "100 Most Disgusting Things On The Planet".  That's what happens when you give a seven-year-old boy some money and the freedom to buy whatever book he wants.  We've had some great evening bed time readings lately... 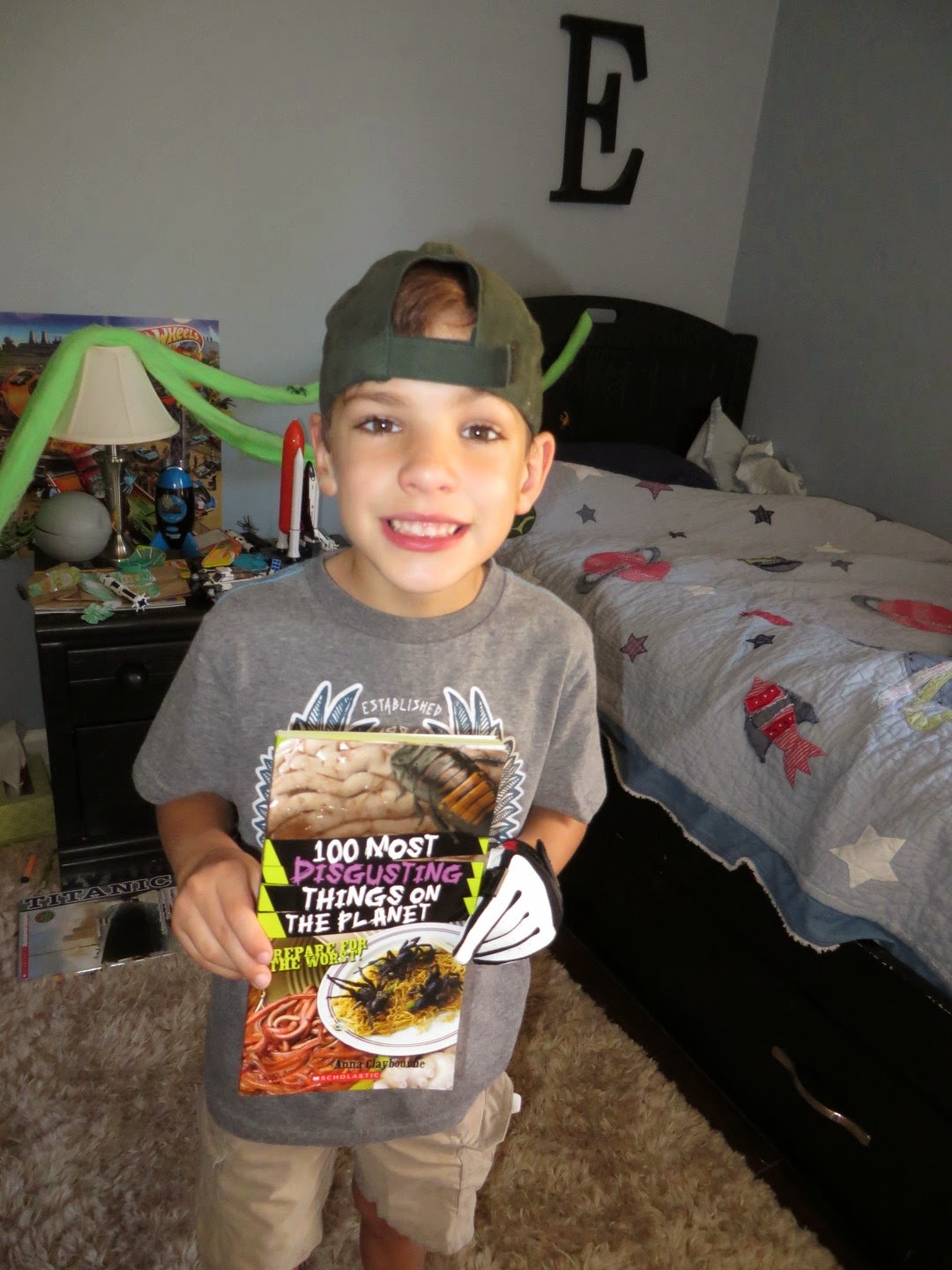 When Easton was about six months old Kendra and I had a conversation about one day when Easton would join me on the mountain bike trail on his own bike to ride together.  I thought he was a year or so away, but as we were hiking on the trail to look for the bat cave Easton said, "when can I go riding with you on my own bike, Dad?"  it was music to my ears.  He requested we ride the trail we were on because it was relatively cross-country (flat).  I told him it was up to him whenever he wants to ride.  The next day we loaded up our two bikes and hit the trail. 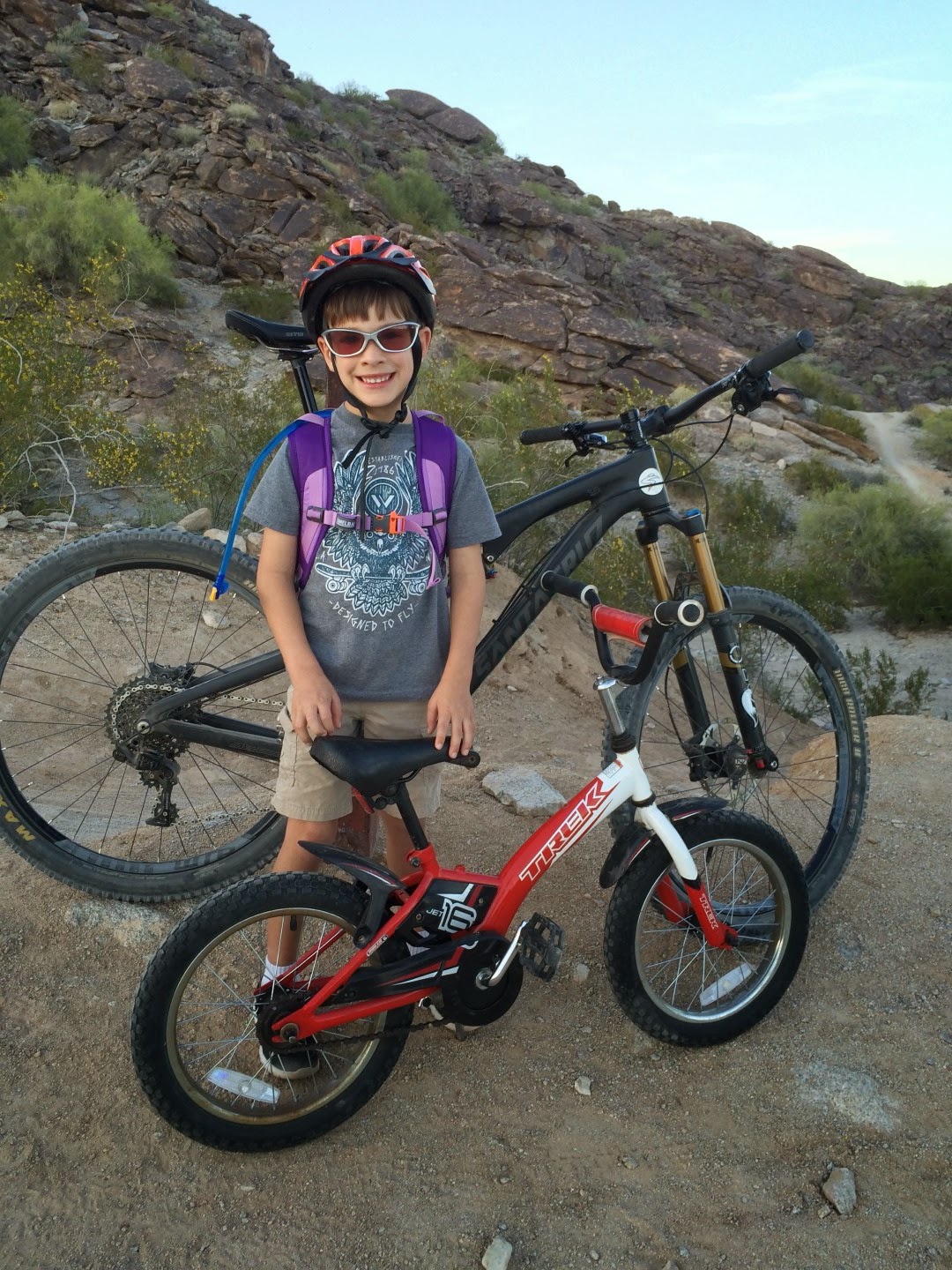 The entrance to the trail is a steep, short downhill section.  You can probably guess where I'm going here.  I rode down it and then he followed me.  Before I had the chance to say, "stay on your brakes!" he crashed at the bottom in cloud of dirt and sand.  He cried, I comforted him and apologized for not giving him more specific instructions.  he dusted himself off and we continued on the trail.  We persevered!  We rode out to a half-way point and I offered to ride back to the van or keep going.  He said, "let's keep going, Dad.  I'm having fun." 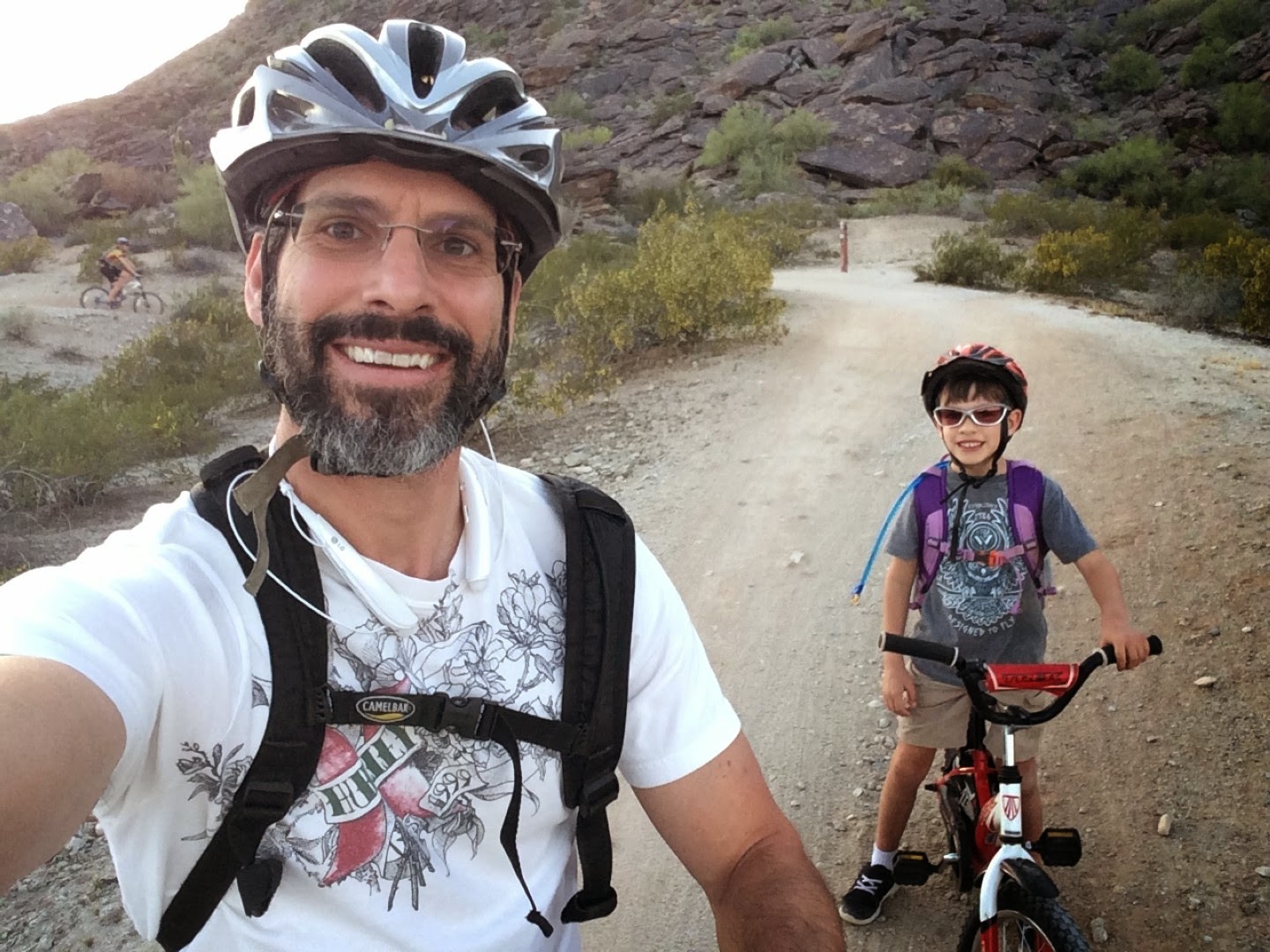 He did a lot of hike-a-bike where he pushed his bike up hills and walked it down some hills, but overall he did extremely well.  I was super proud of him for riding so well and told him in several different ways. 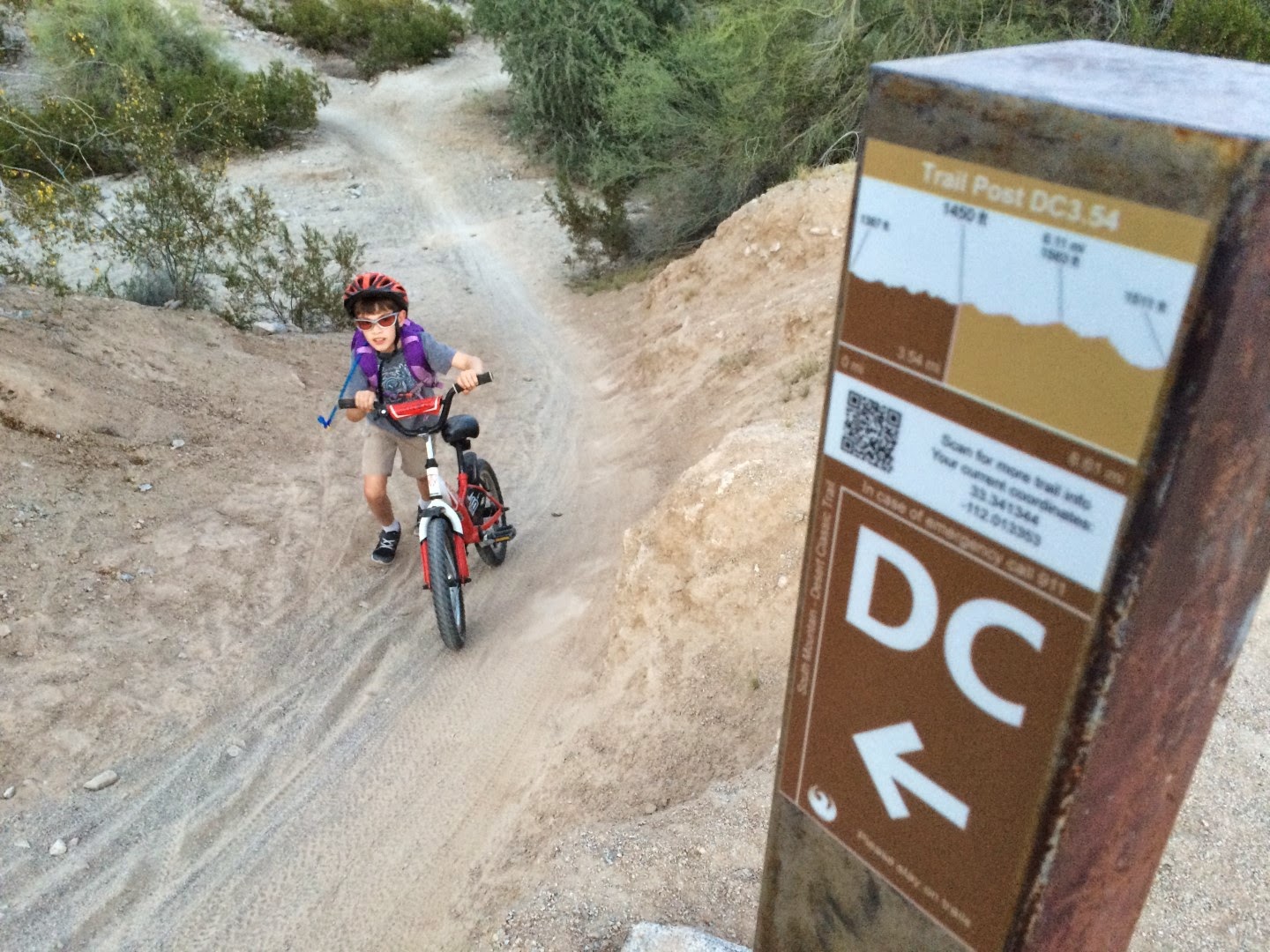 Layla still wears pull-ups every night.  If you would have told me when the twins were born that I'd be buying diapers for 7 years, I wouldn't have believed you.  Yet, here I am with a daughter who sleeps so soundly that she doesn't even wake up to go pee.  We've been working on it by giving her less water close to bed time, requiring her to go pee before bed, and even waking her up before I go to bed occasionally.

I bought her a very nice snowflake necklace at a 90% discount at Khol's.  A few months ago i told her if she goes three nights in a row without peeing that she can have it.  She finally did it!  We are on the right track to a diaper-free home.  We persevered! 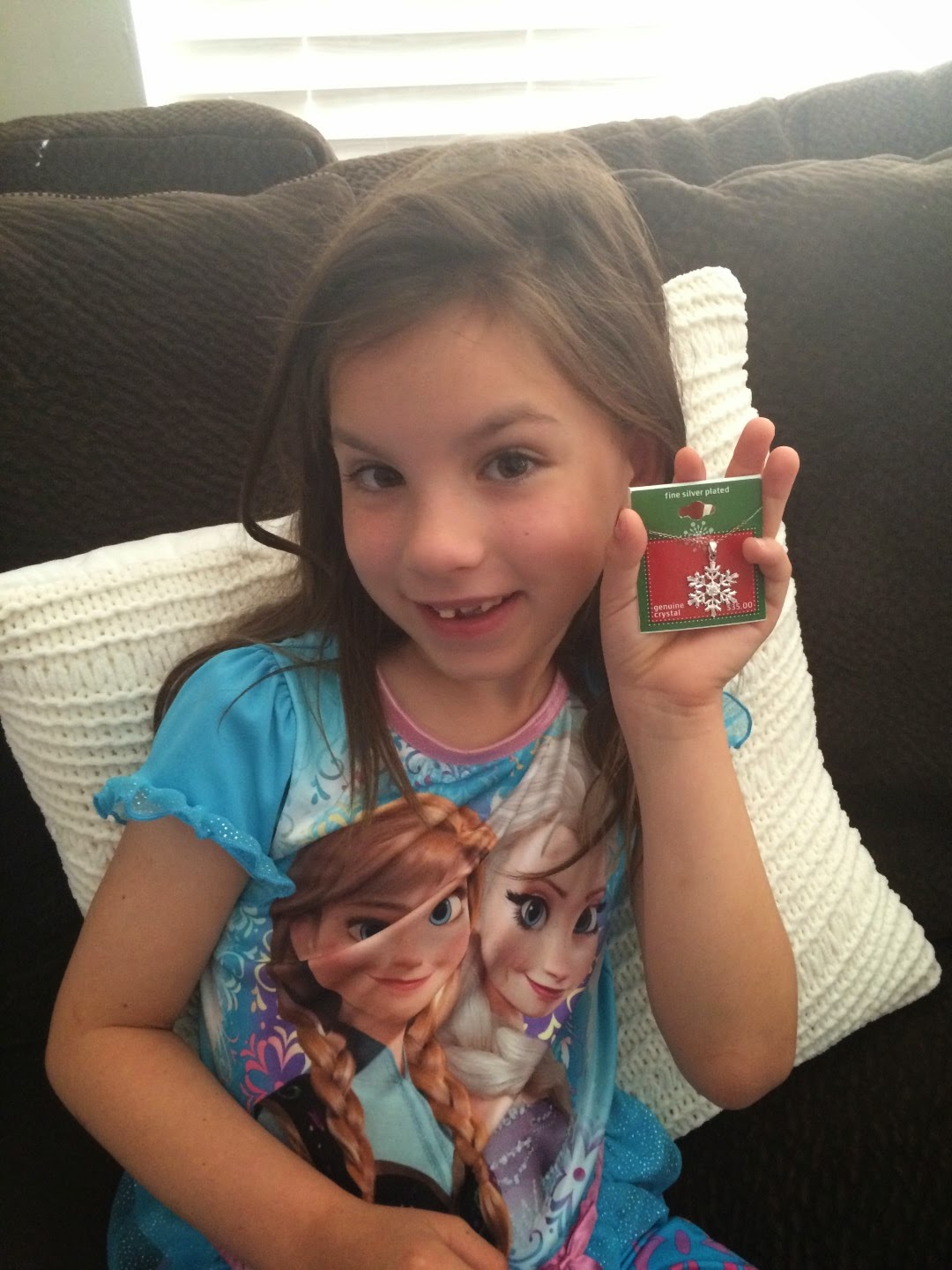 We are holding up well at the casa de Webb considering the adjustments required to accommodate Kendra's new "temporary" normal.  It's a day-by-day process we are anxiously walking through.  We will persevere!