The day finally arrived for Easton's relentless dream to own a Titanic.  A few days ago Kendra gave the twins a directive to draw their own picture and color it.  Layla drew something creative and flowery.  Easton drew the sinking of the Titanic. 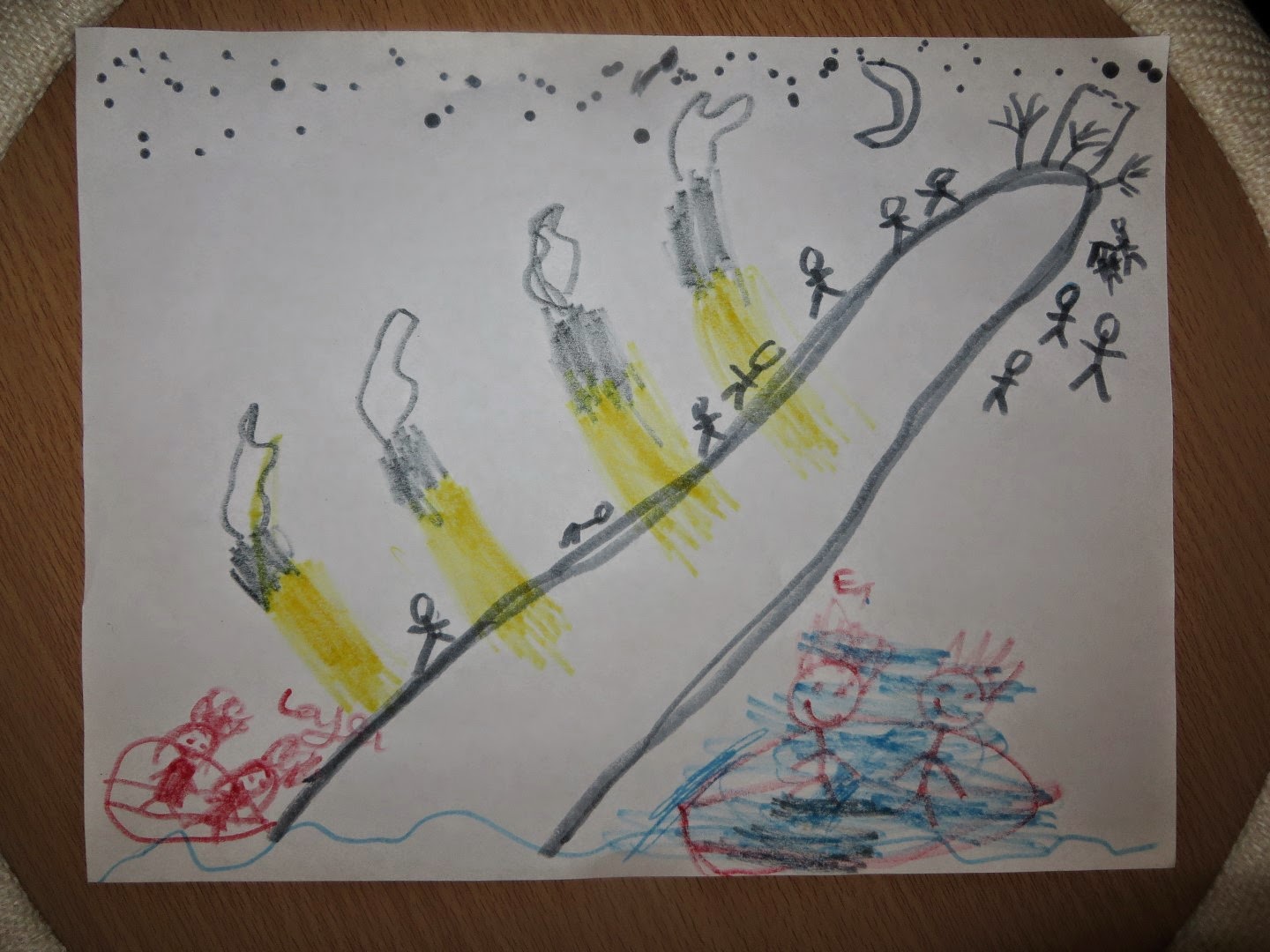 I don't know what's up with his passion for disasters, but it is amazing to hear his thought process and how his mind works.  It might be a warning sign for a kid going into darkness of his soul if this were taken out of context.  He regularly talks about tornadoes and volcanoes and space shuttles exploding and the sinking of the Titanic knowing they are real, disastrous events.  He isn't focused on the death and destruction.  He is focused on the power displayed and the tragedy.  When he talks about the Titanic he is excited and animated describing details of how big it is and how it works.  When he talks about the people who died he doesn't fully "get it", but he is somber and sad for the loss of life.

Part of my job as his dad is to encourage him to pursue whatever he is passionate about.  He's been asking me for months now to have a Titanic toy that floats.  I've been shopping for one that won't break and sink on the first day of use, but doesn't cost a fortune.  I found one and told he I ordered it.  The count down was on and he marked his calendar accordingly.  The big day came and as I arrived home from work he said, "do you think it's here yet?"  I said, "let's check!"  We opened the front door and the party started. 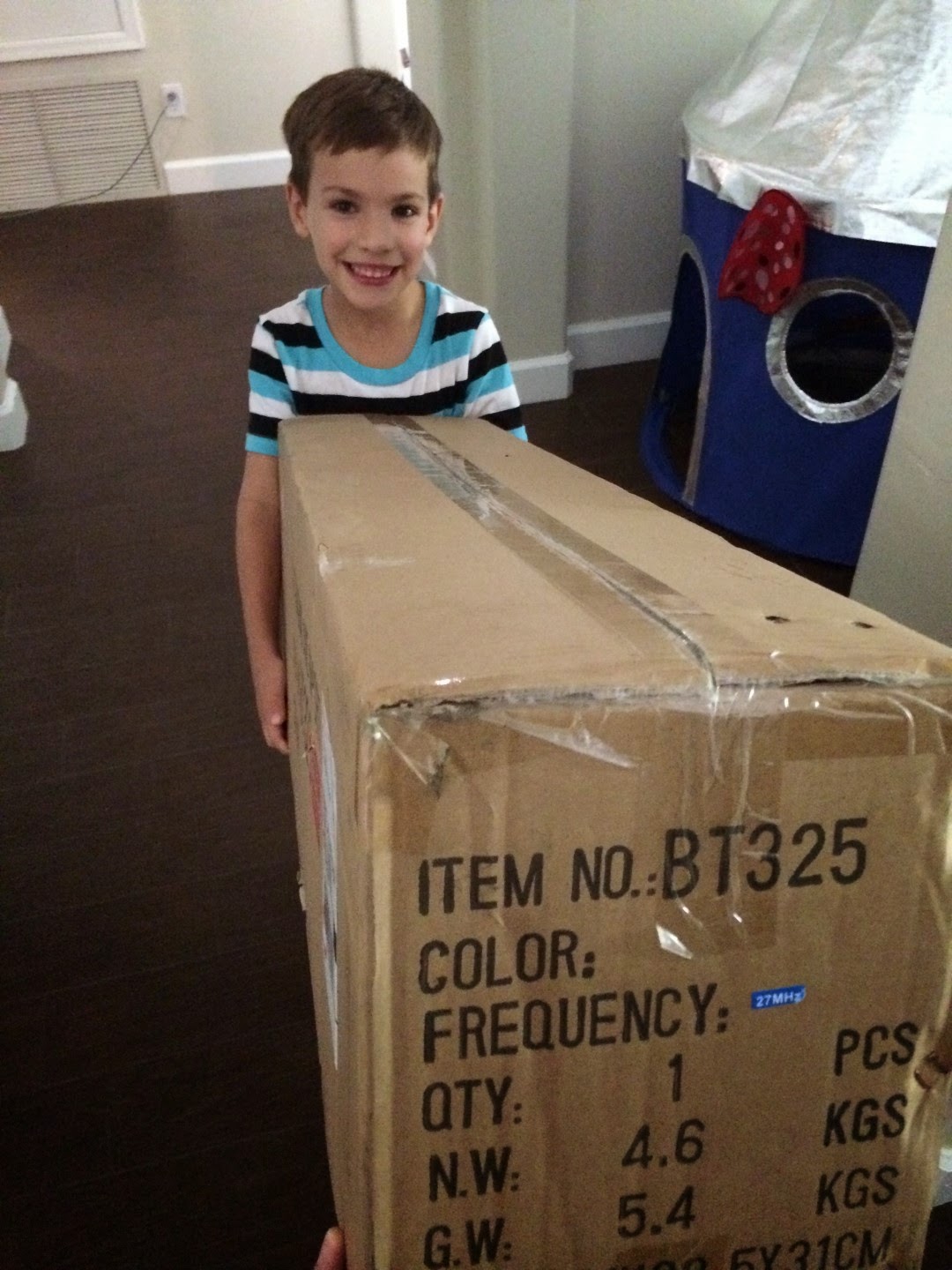 i let him open the box with his pocket knife, so that was a big deal. When the box came out Easton hit a new level of giddiness like i've never seen before.  his smile says it all.  He was kind enough to let Layla join in the fun.  This is the part I like most about this great unveiling.  Layla was happy for Easton even though the toy wasn't for her.  Easton was willing to let Layla be a part of the action and never had a single selfish comment or posture.  I am more proud of that than anything from the day. 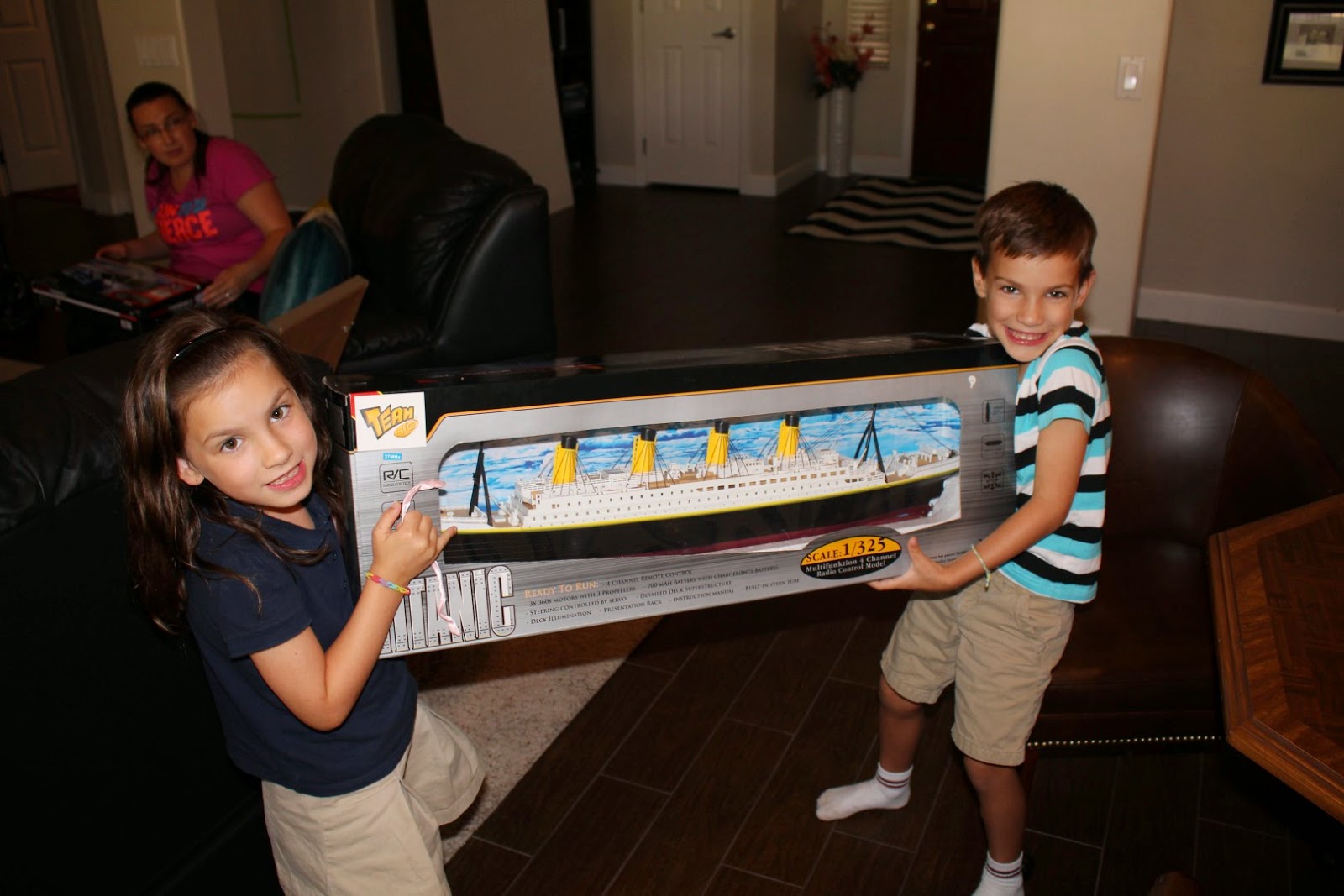 We unpacked all the stuff with great care. When it came time to remove the ship from the box he held his new prize as if it were made of delicate lace. 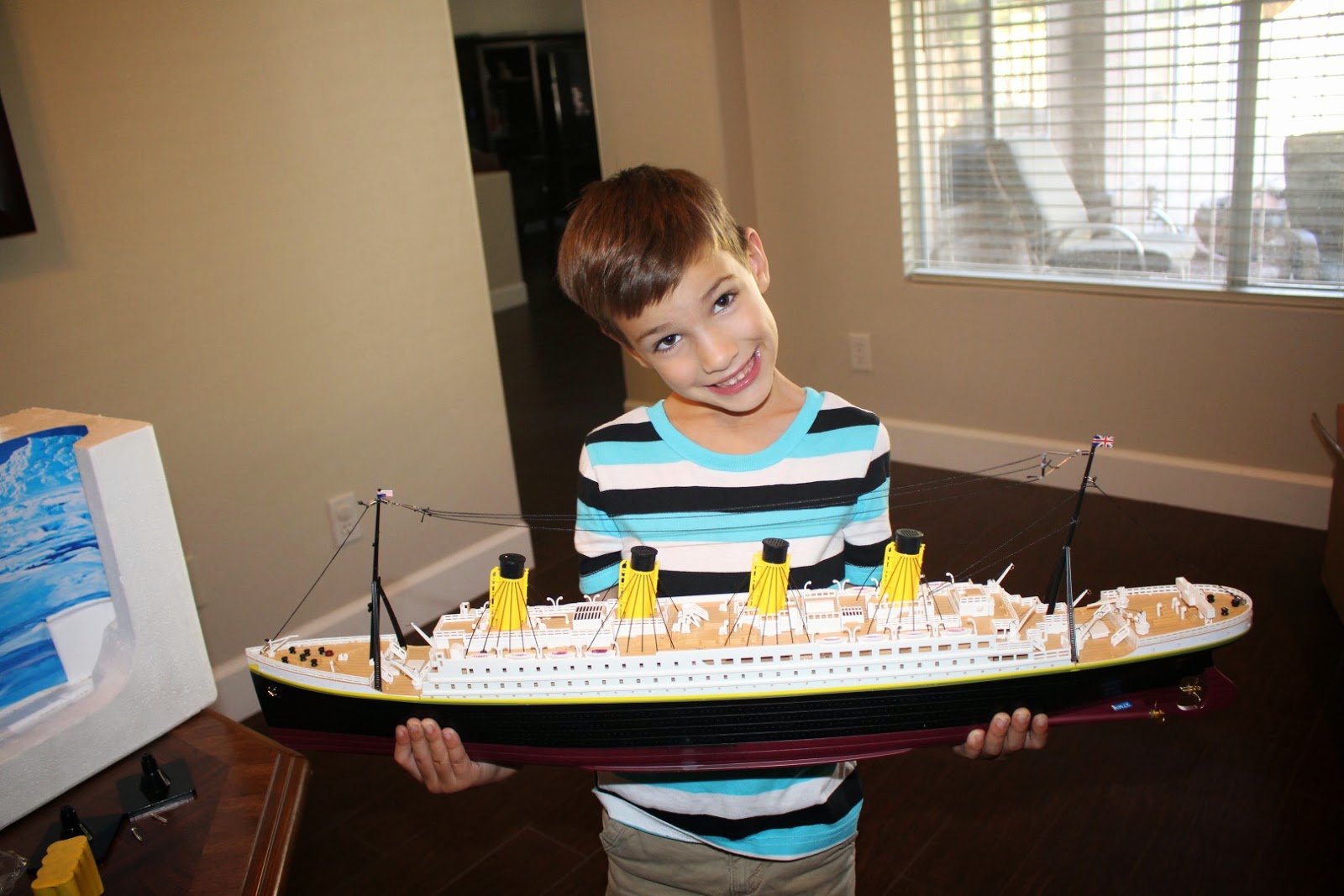 He begged to have it sit in his room overnight while the battery charged.  of course!  why not?  right? 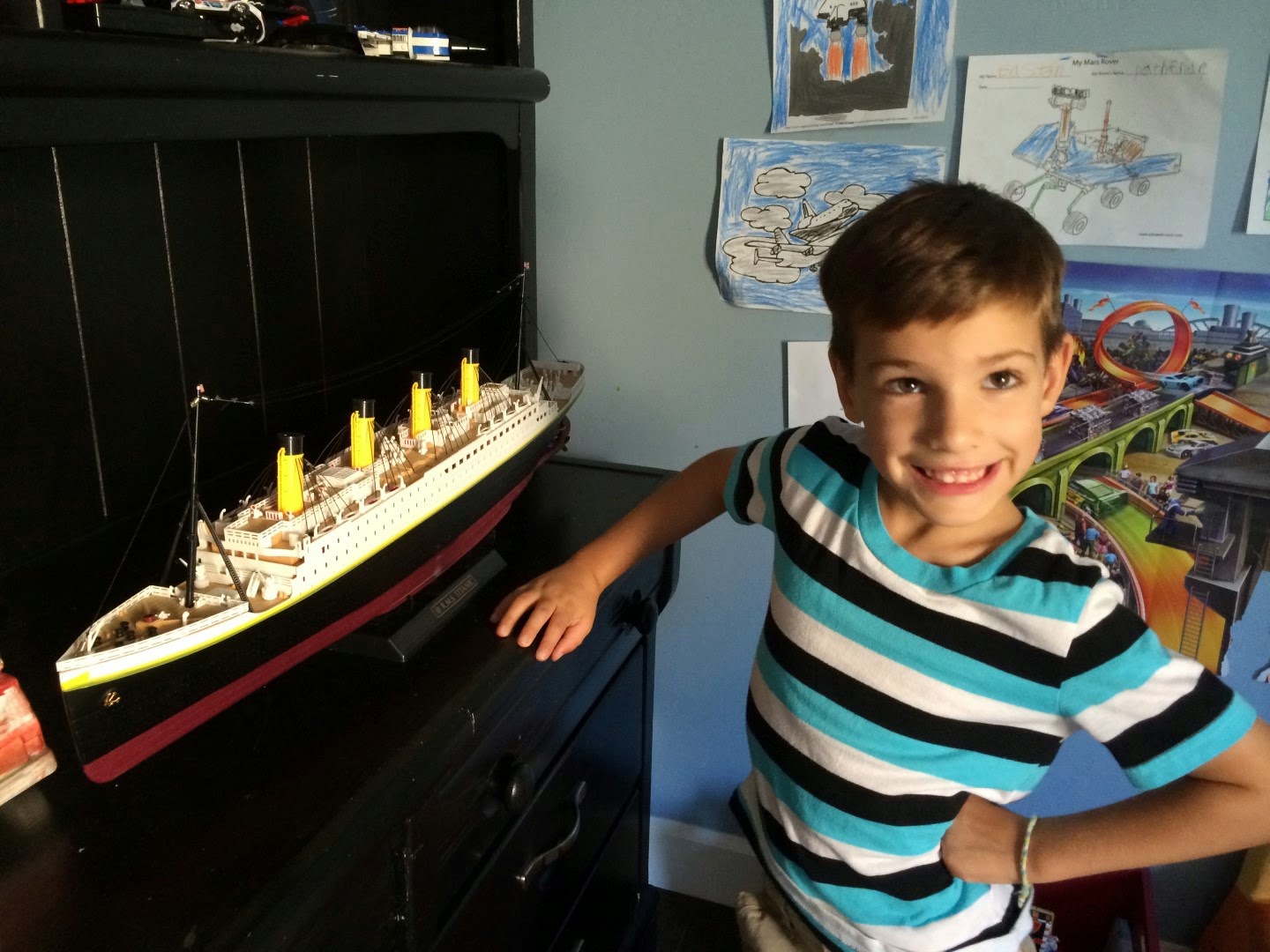 The next evening we prepared the ship for her maiden voyage.  Layla became the first mate saying, "Aye aye captain!" several times. 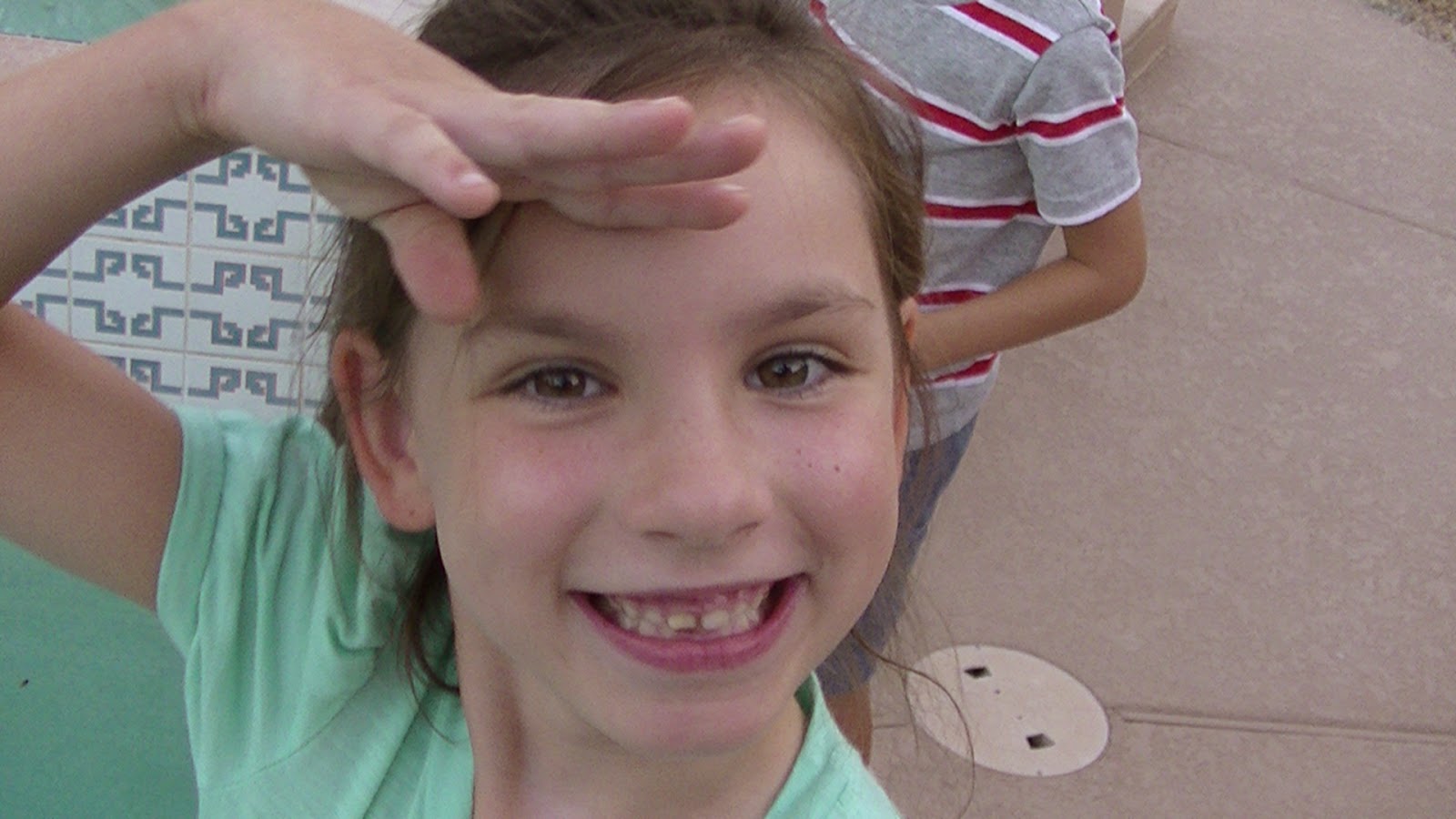 The Titanic set sail in the pool with great success. Everything works perfectly and it didn't sink.  He learned how to steer it and what the rudder does.  it's alive! 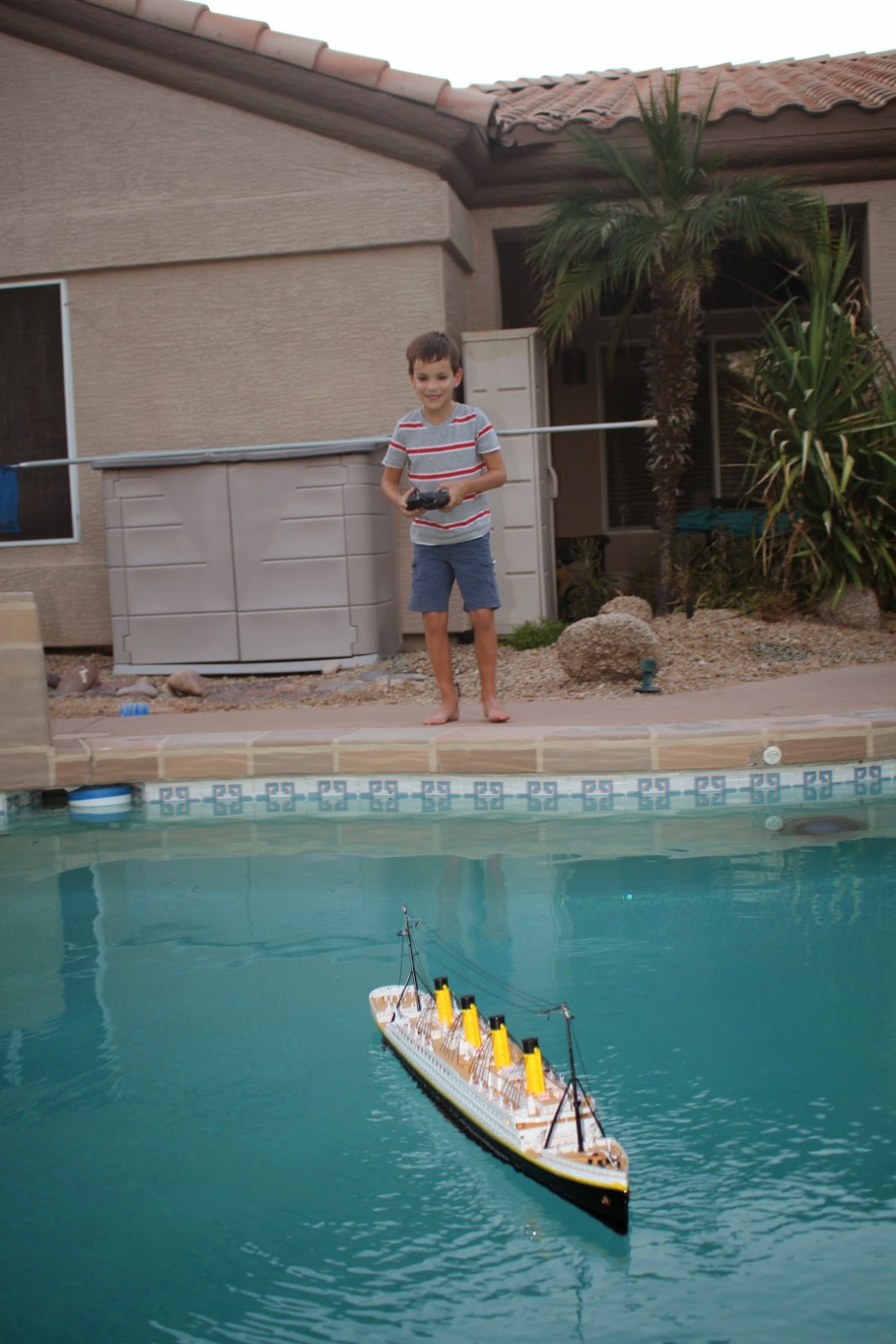 I took a short video of the trial run around the pool. i foresee daily ship launching for the next few weeks. the next stop is swimming with the Titanic!

It ws great to see the launching of the Titanic! Easton learned how to manuver the ship so quickly! Wish he could have been with us on our cruise on a big ship.Maybe some day we can have him and family can do that in the future. Love ya gobs, MOM

He figured out how to steer quickly! I told Easton you were on a ship like the Titanic and floating in the same waters as the Titanic would have been had it not been for the iceberg. He was impressed to say the least. All of our family taking a floating vacation together would be a guaranteed winner for the 4 Webbs. Maybe someday...