Party on, friends and family!

The week before spring break was an explosion of enjoying the moments and anticipation for the birthday party.  Easton and Layla's school had a "superhero" day where kids were allowed to dress in their favorite superhero costumes.

Easton only has a couple of options and Layla only has one...  unless you consider Rapunzel's long hair to be a superhero power.  Now that I think about it, Rapunzel is more of a superhero than Ironman!  Anyway, they went as spiderman and spiderwoman. 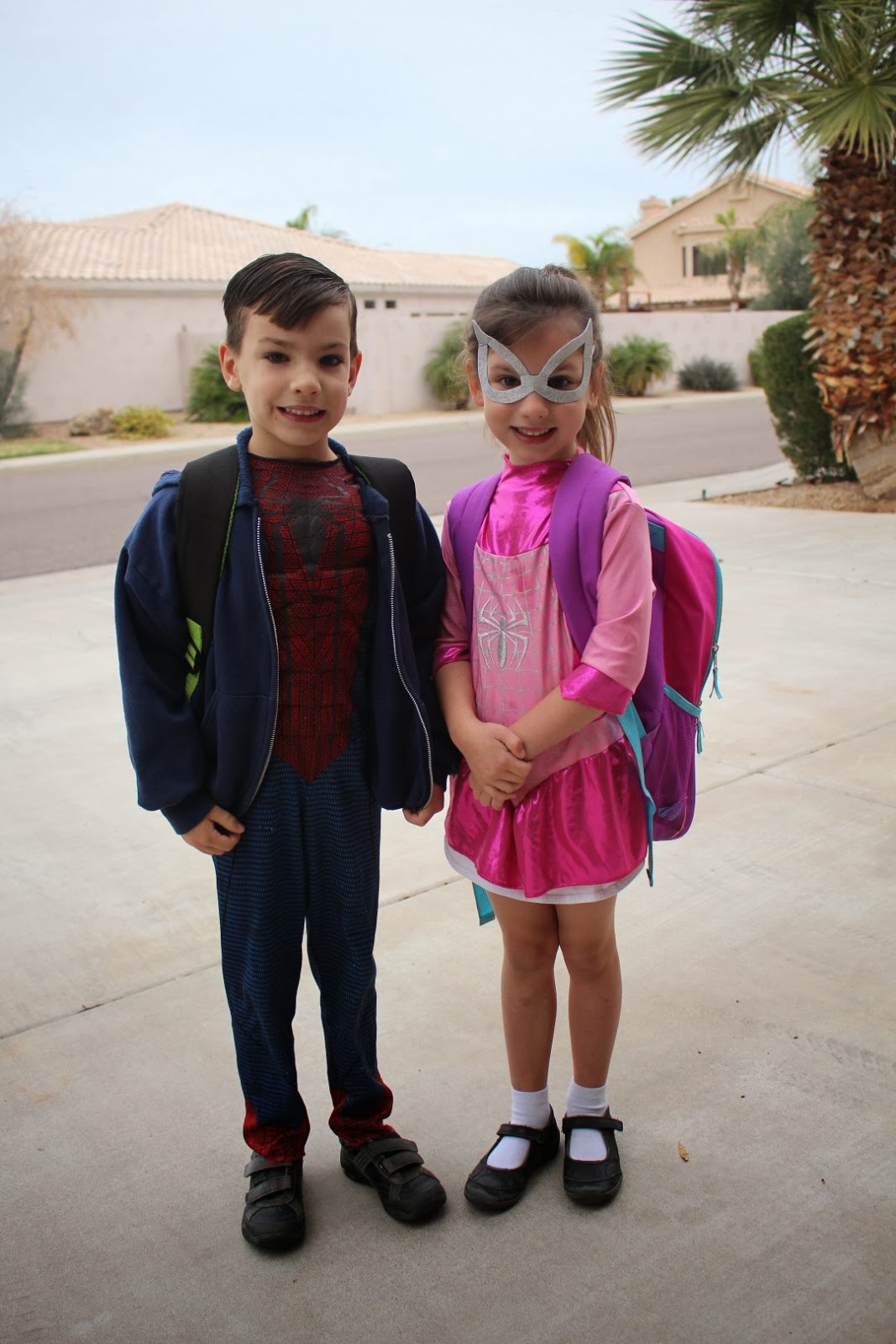 and the Webb's shoot webs! 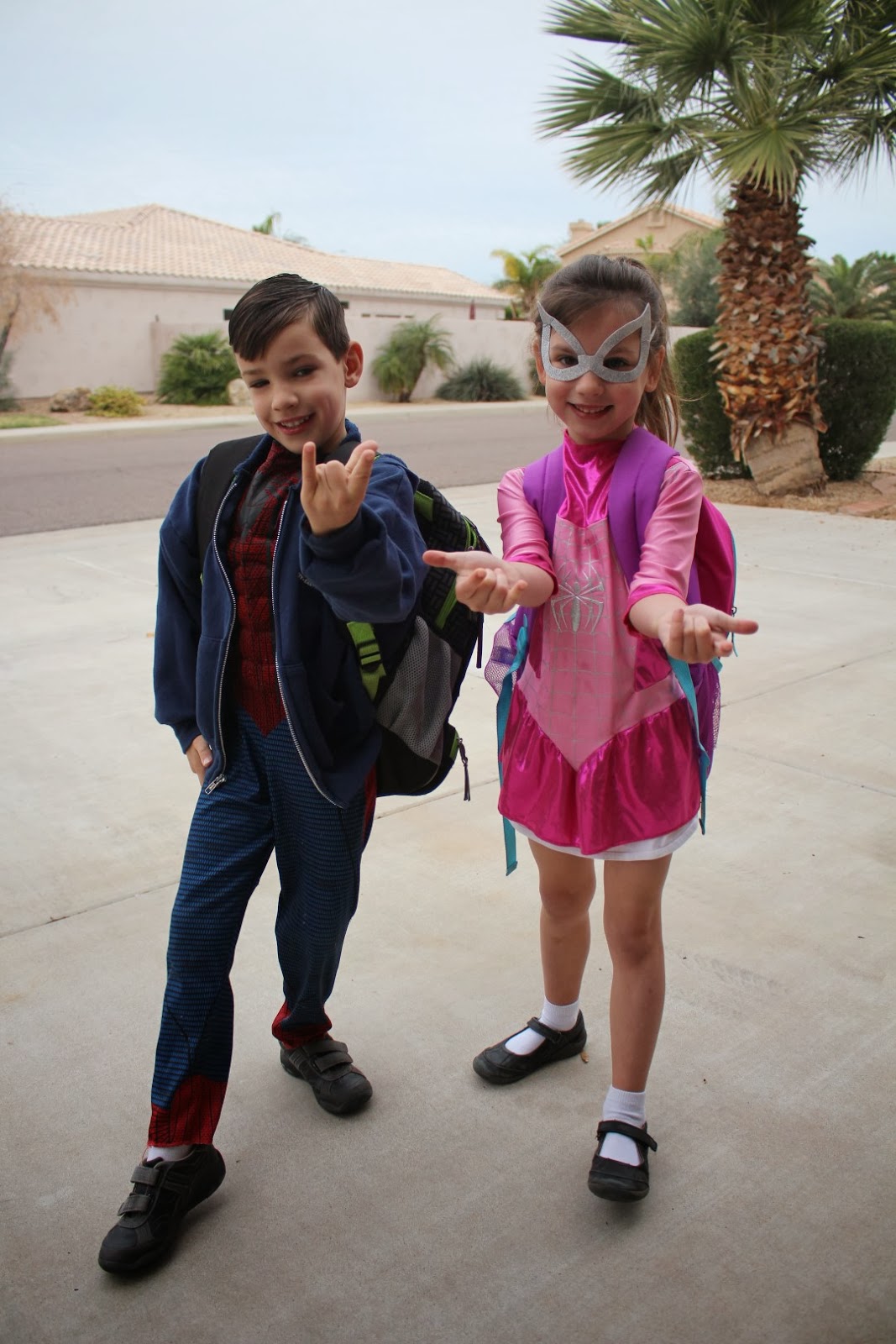 Their time with Ouma for the past two weeks was priceless and very much appreciated.  From the 7:15am dual alarm clocks all the way to the 7:00pm good-night songs it was "Ouma first!"  She made so many things possible and more importantly shared quality and quantity time with the twins.

Even though their birthday was in February, we planned their party for March 9th because that was the first weekend we had free for the past 6 weeks.

The birthday party was one of the best six-year-old birthday parties I've ever seen or heard of.  Our friend, Tam, added the icing on the cake with her face painting.  Every attendee chose their own design.  Layla and Easton were first because it was their birthday. 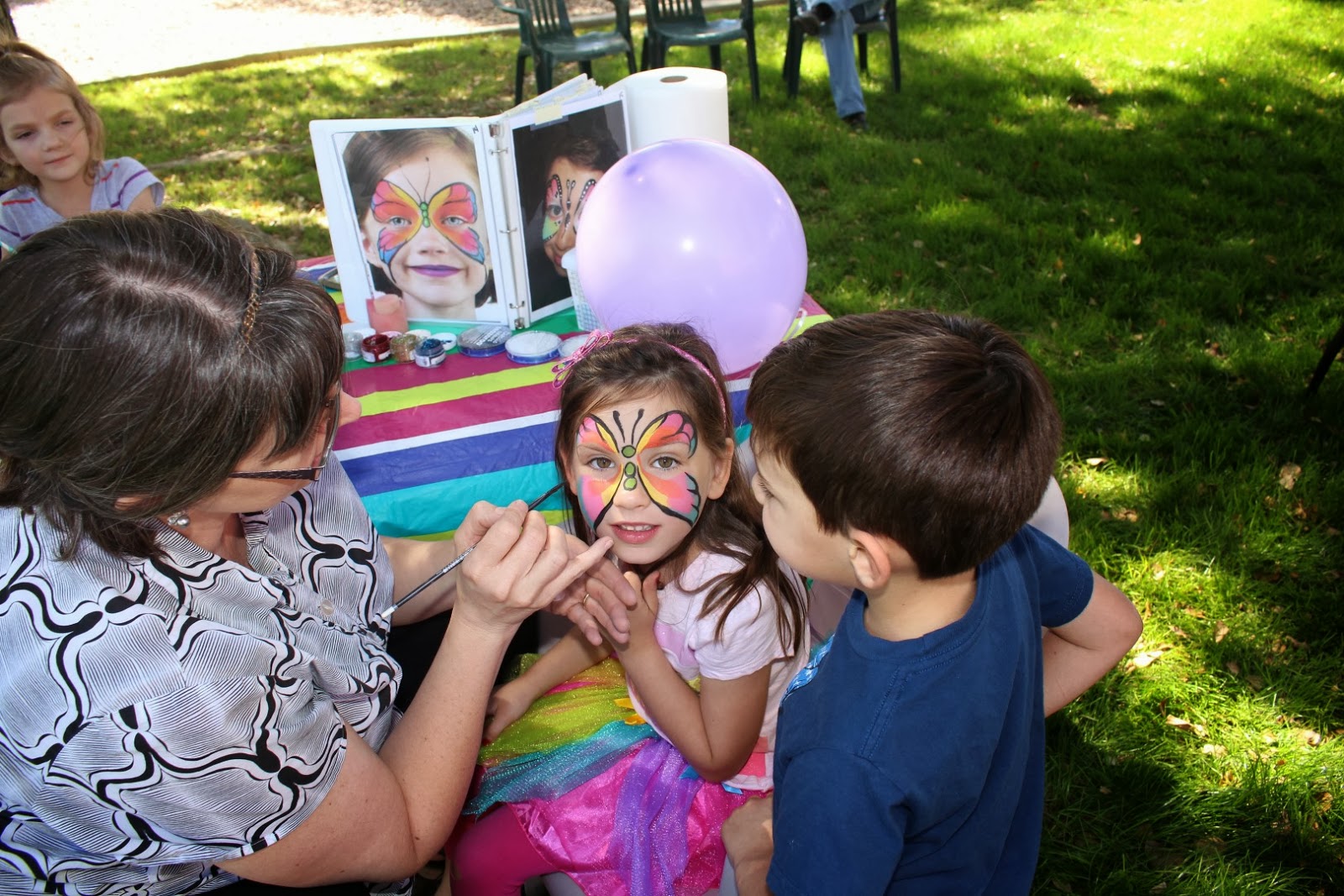 Easton saw the example picture of the scorpion and chose that option.  They were happy campers. 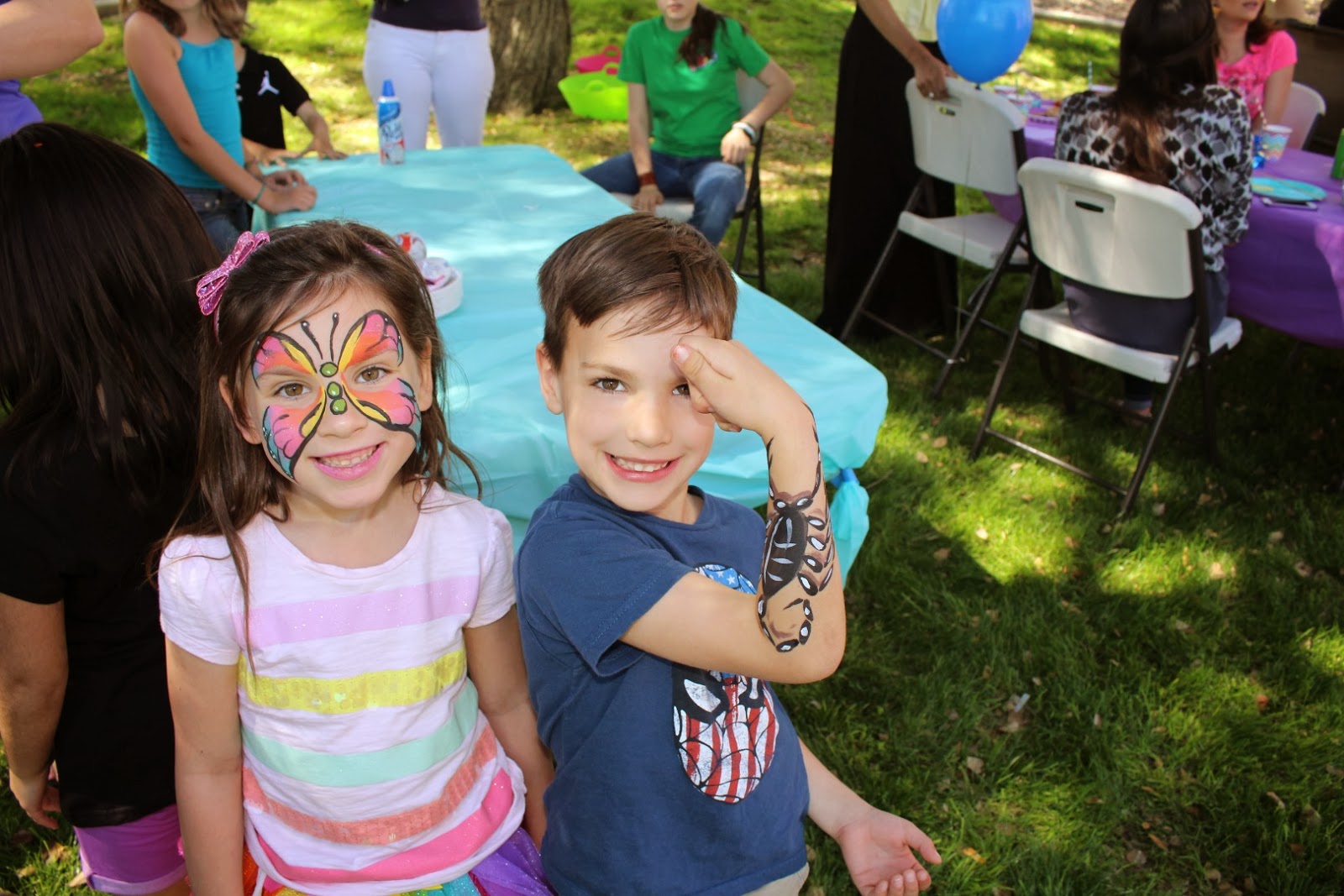 Kendra made the party theme "worms and rainbows".  I'm not sure how she came up with that other than Pintrest or Easton and Layla's input.  We had some silly games such as this one where gummy worms were covered with whip cream.  The participants had to find the worms with their mouth and spit them out on the table.  It was like bobbing for apples, but with whip cream and worms instead of water and apples. 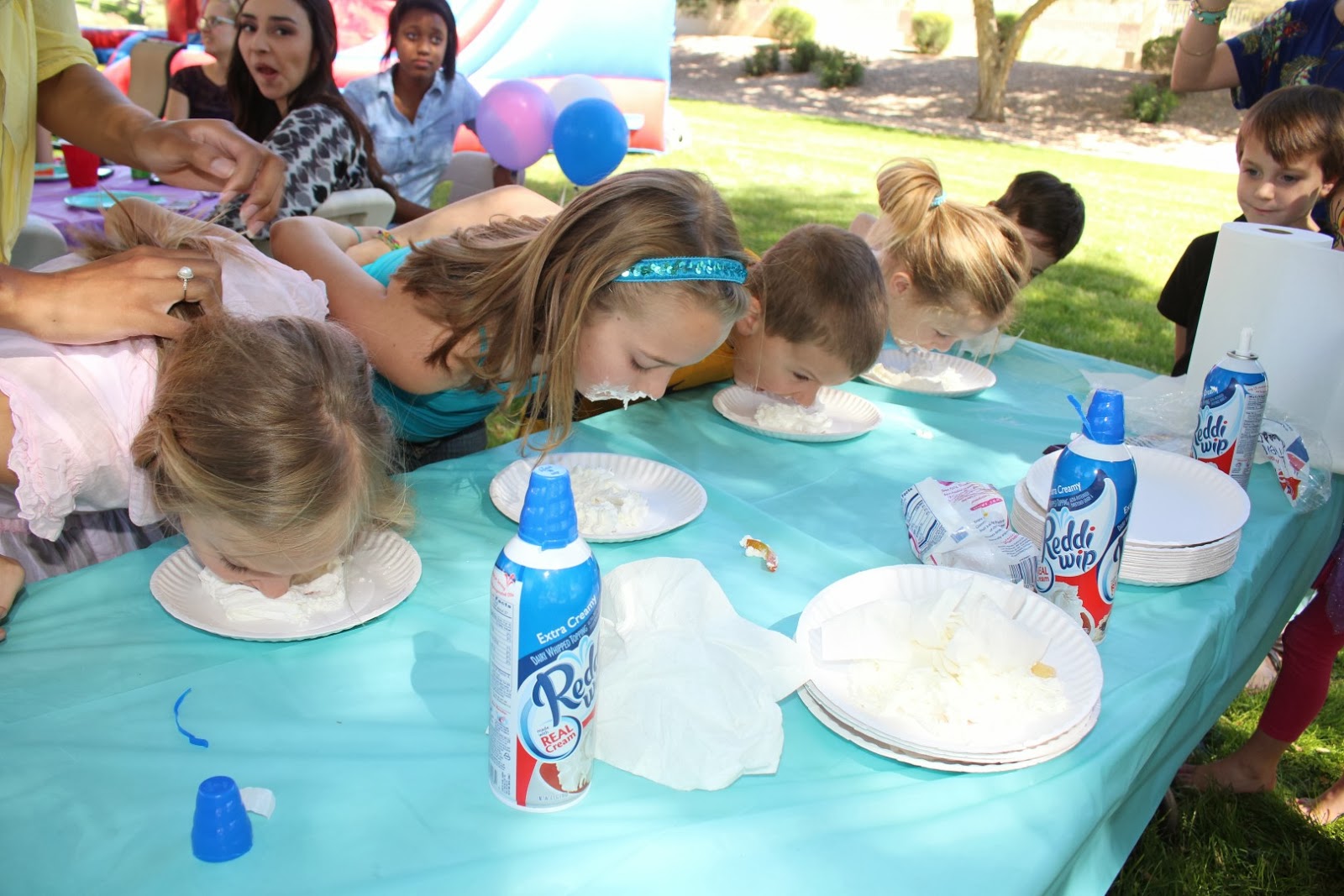 Kendra and I filled about 200 water balloons for the party.  We create two "bases" in the greenbelt where the balloons were waiting.  We split up the two teams into boys vs. girls.  Then yelled, "GO!" 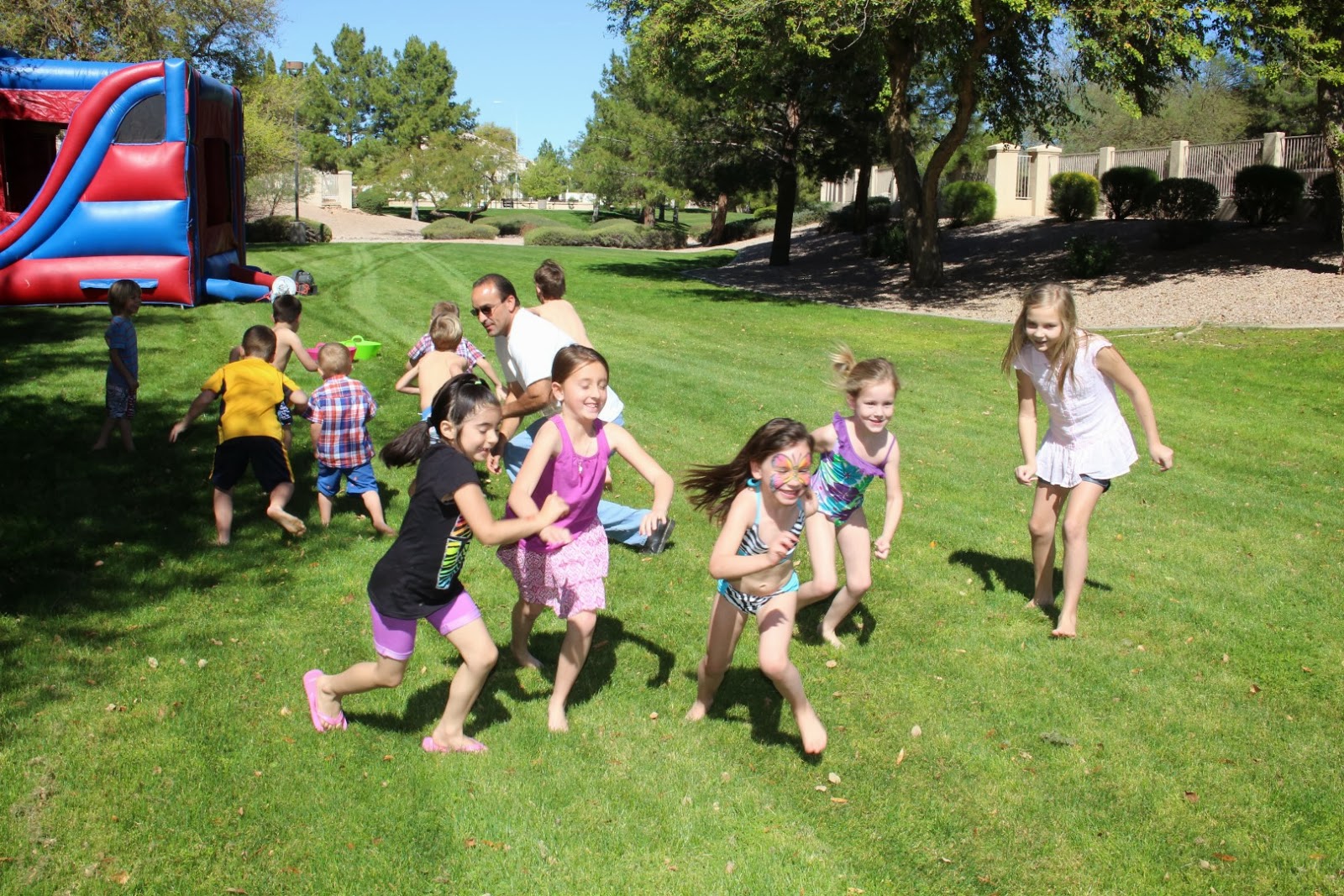 Six-year-old kids have bad aim.  That was the key lesson I learned from this experiment.  9 out of 10 balloons hit the grass and died.  The problem is that the two bases were too far apart.  closer bases would have resulted in soaked kids.  Even so, they had a blast throwing them. 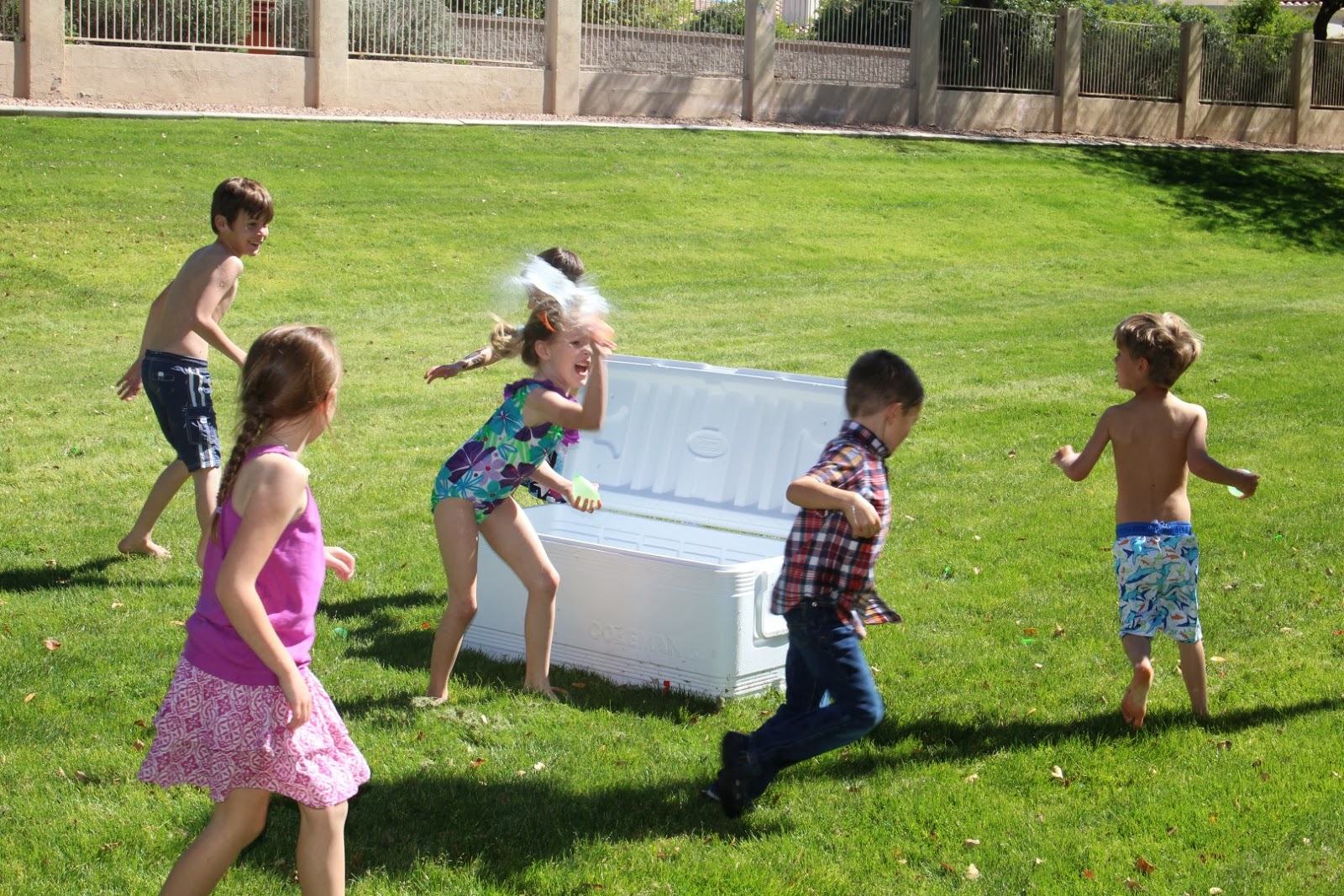 Kendra baked two rainbow cakes, cup cakes, and cups of chocolate pudding and oreos with worms sticking out.  Lots of choices for the many guests.  The rainbow paper on the cake was edible!  kind of weird to eat the decoration, but it was a tasty cake...  All three pieces I ate. 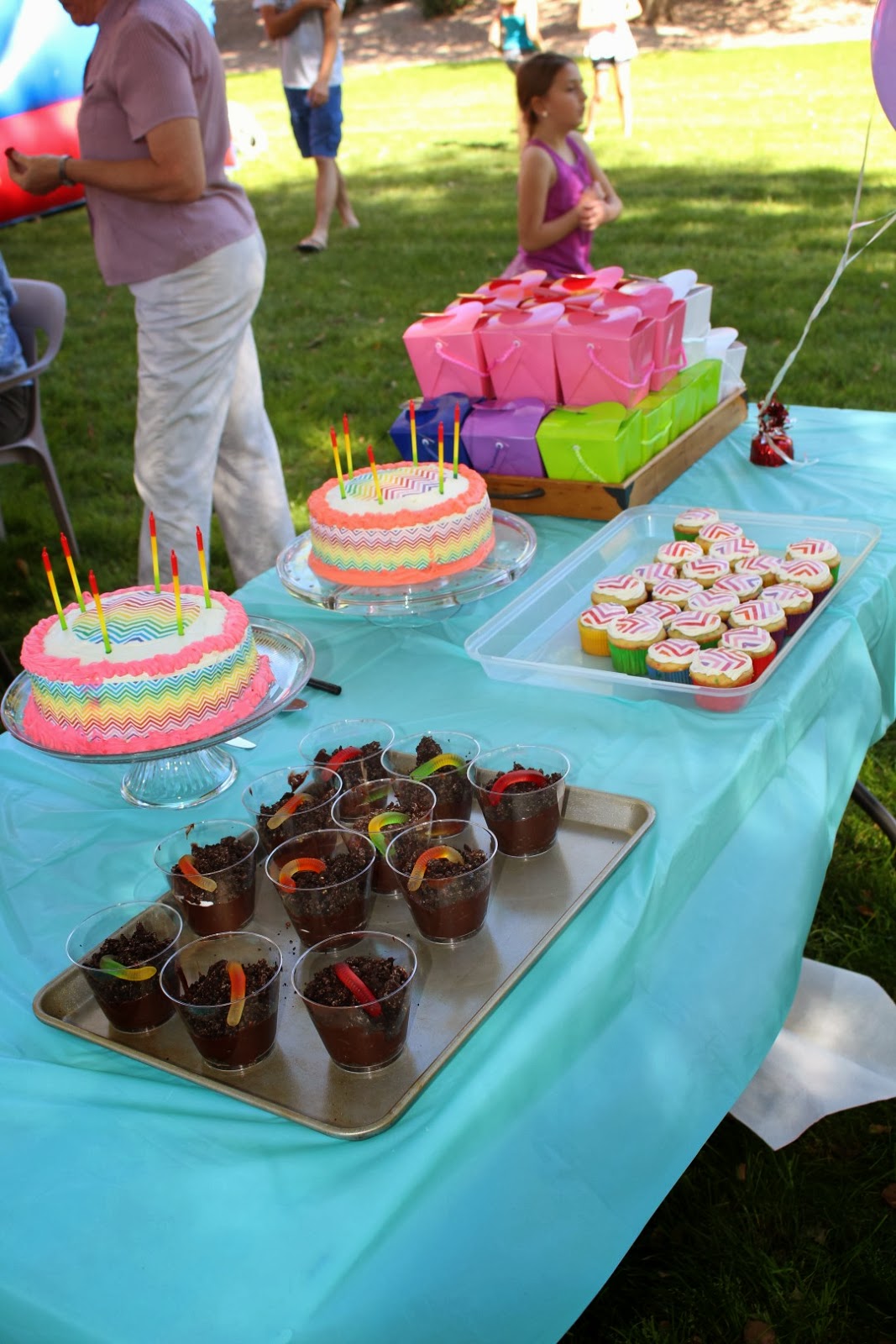 The whole crew sang happy birthday to them as they smiled brightly and soaked in the celebratory moment. 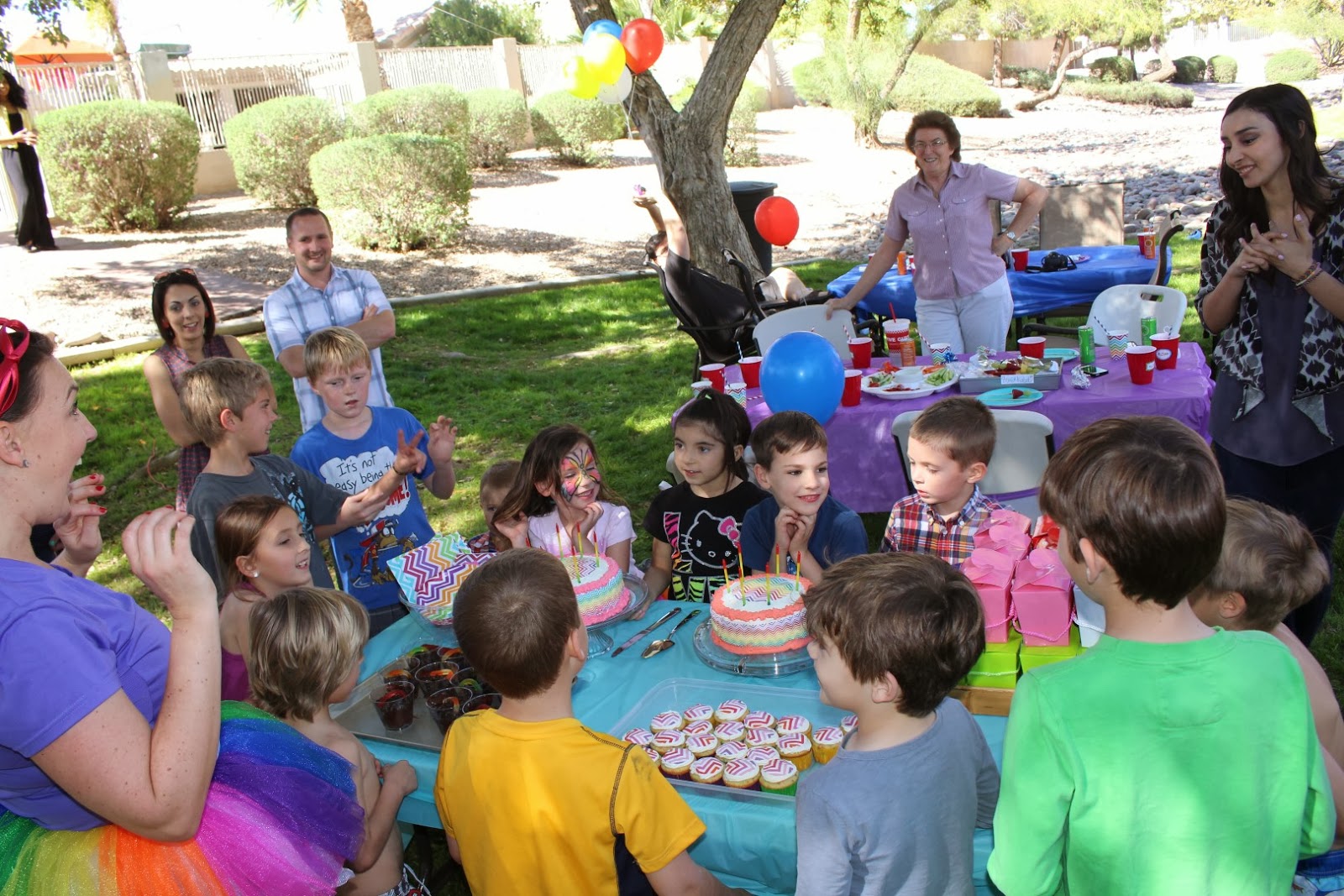 They were so antsy waiting for cake.  It is humorous to watch a table full of kids exercise patience and self-control. 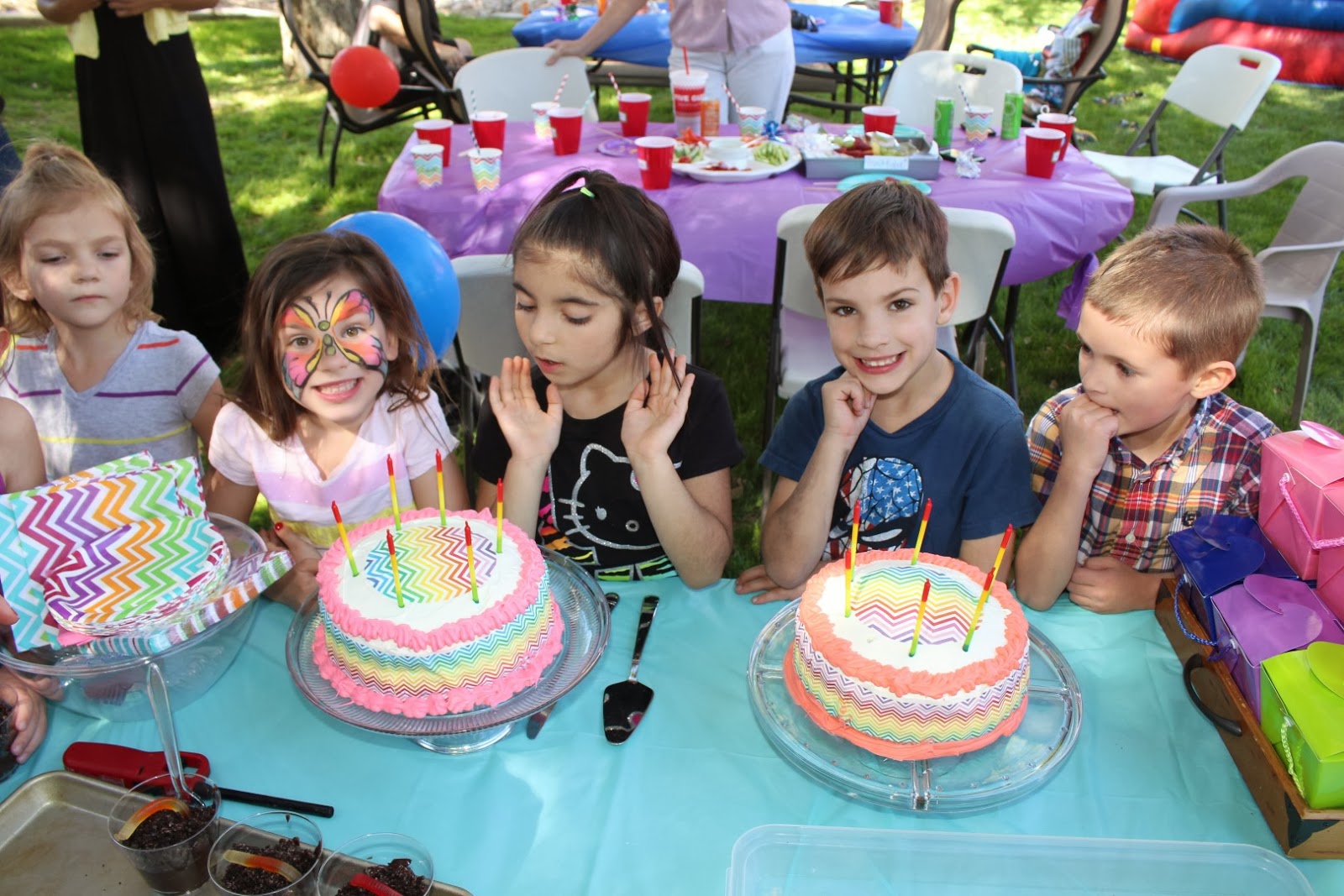 And here's the rainbow cake Kendra made.  Every person who received a piece responded in the same exact way, "wow! the cake is rainbow too?" 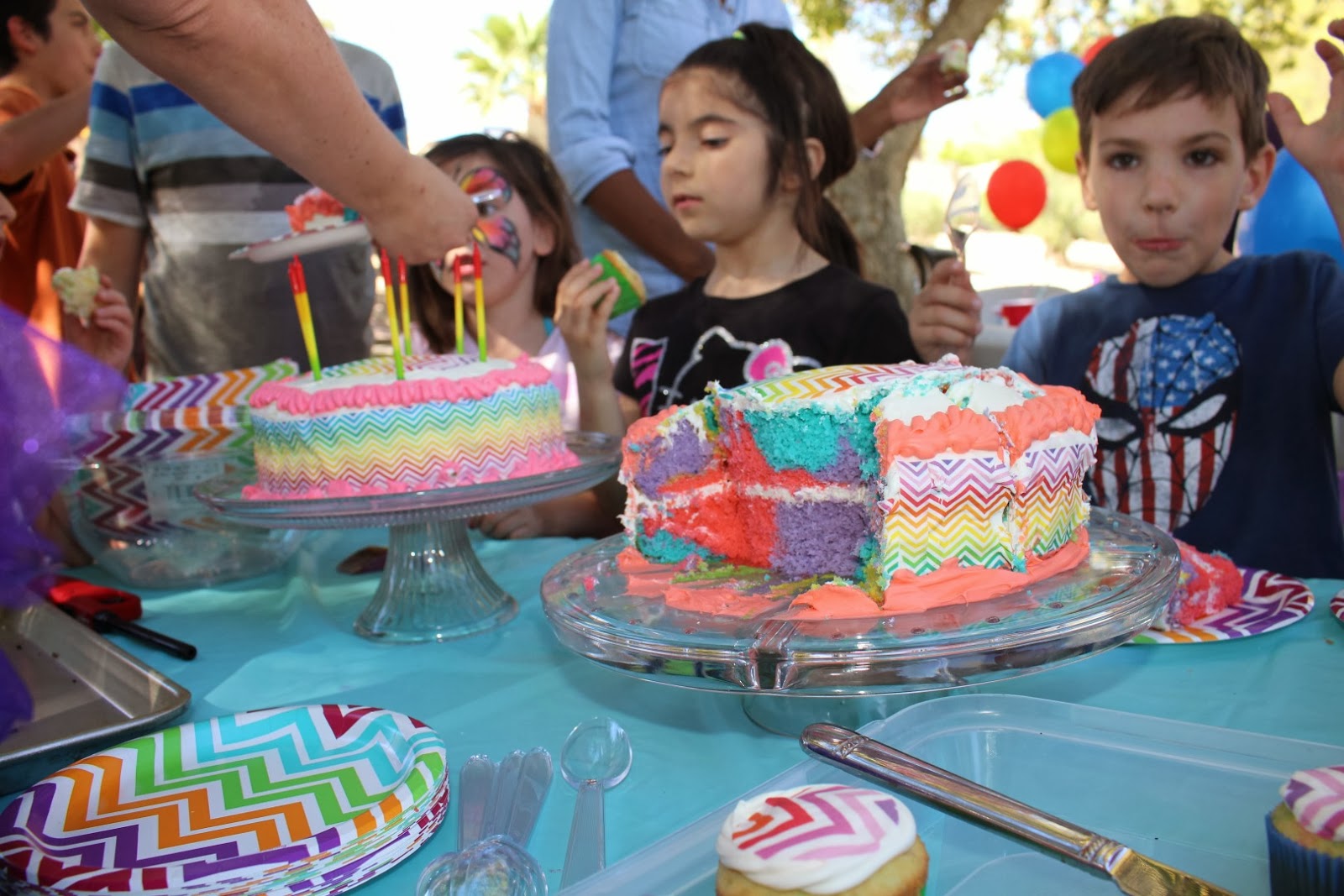 The greenbelt was the perfect setting for us to have the party.  The perfect weather made for a very relaxed atmosphere.  Here is a look at the layout and crowd we invited. 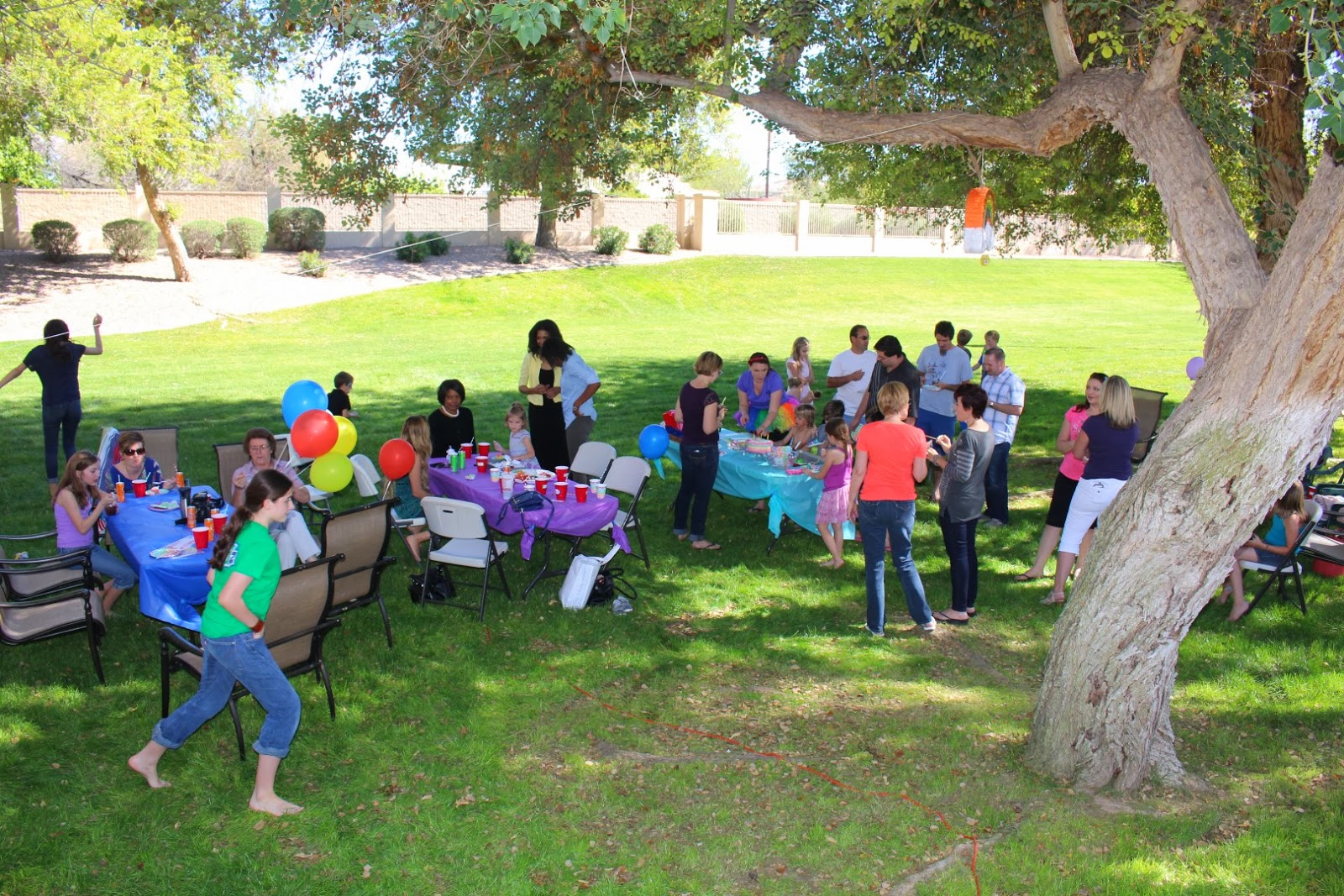 What better way to top off a rainbows and worms party than with a pinata?  We made it through almost the entire line of kids before it burst candy onto the ground.  Layla had some good swings! 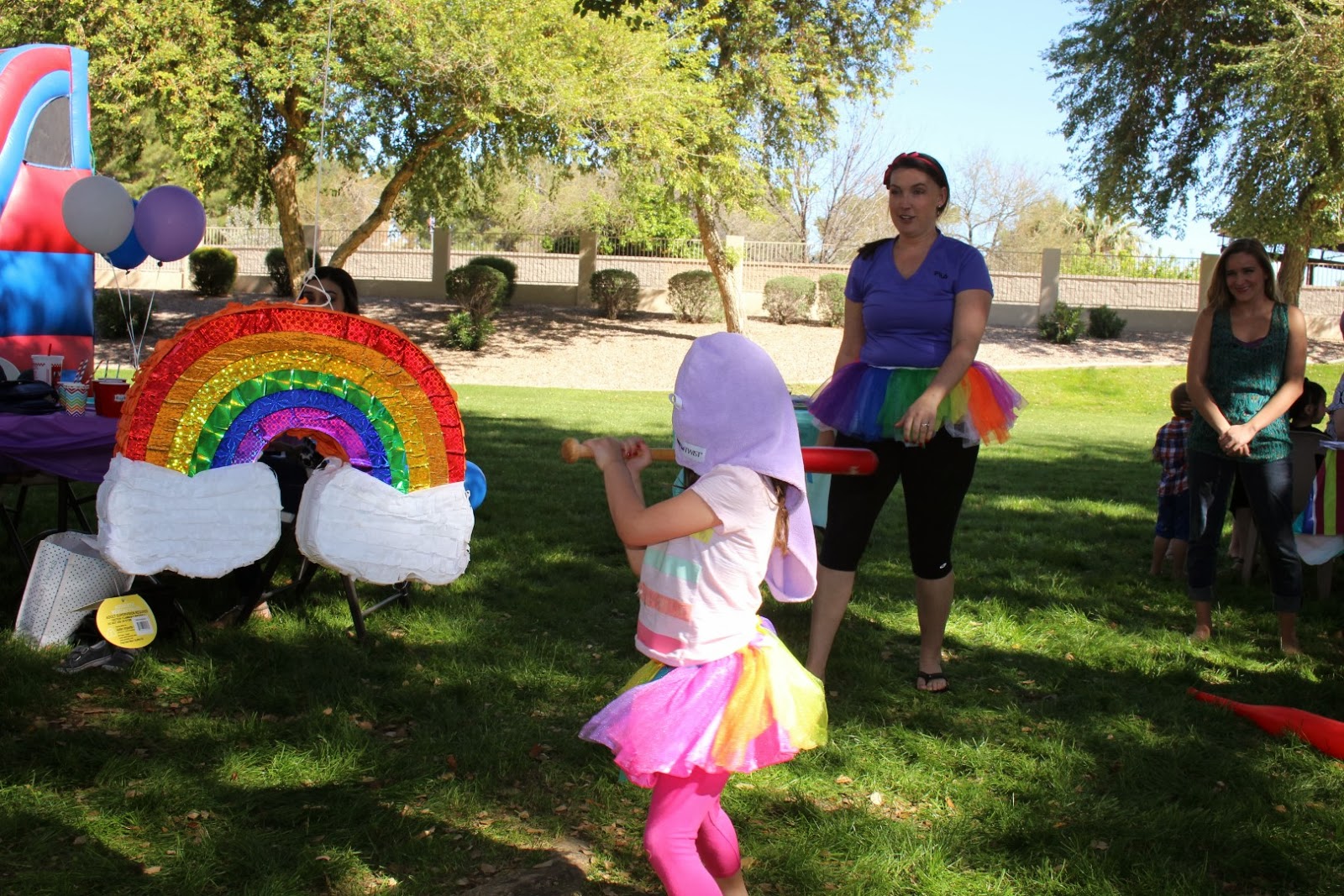 Here is Layla with three of her friends who had their faces painted.  They were some happy girls. 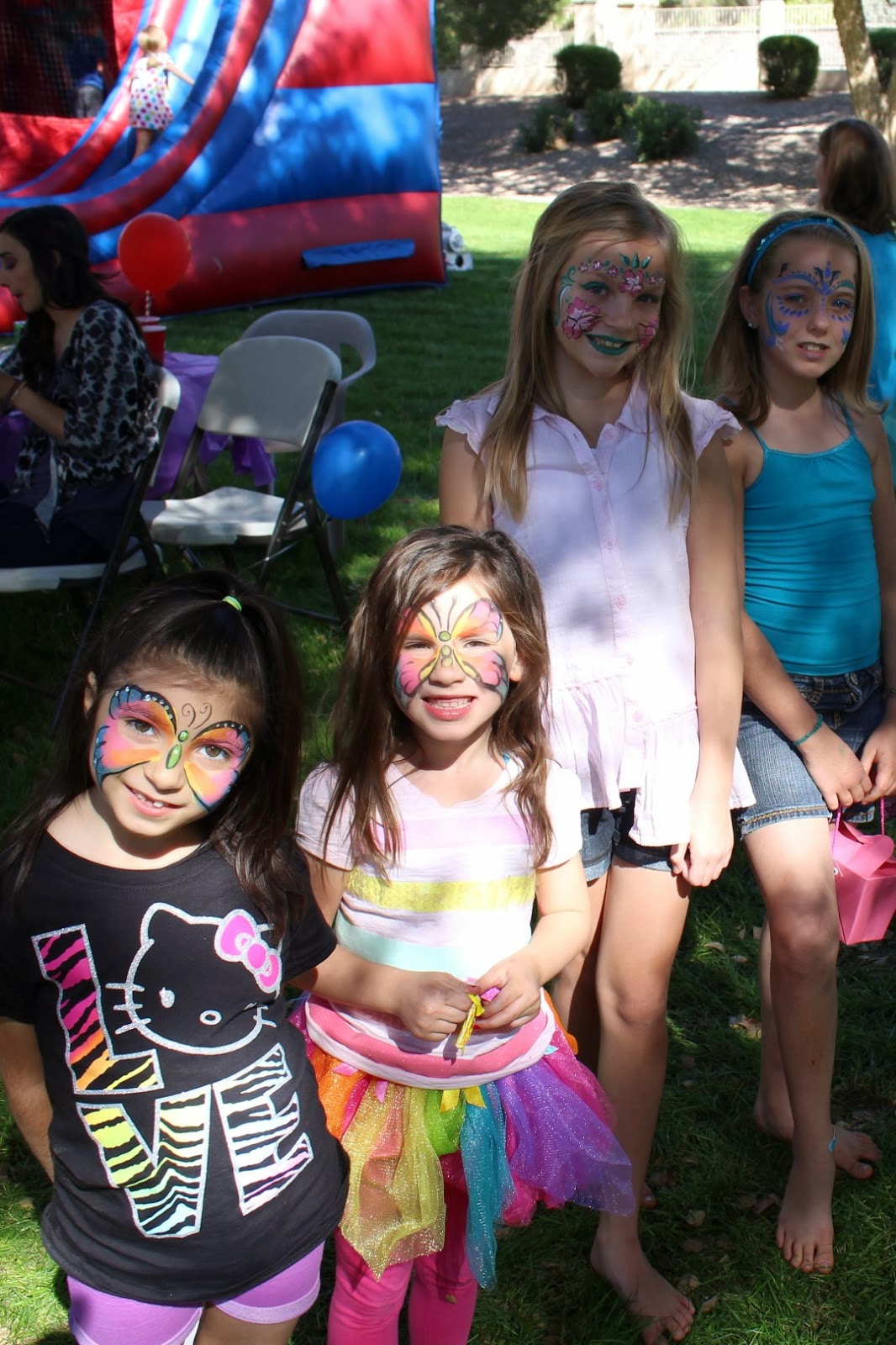 And one picture of Layla's close friend Kayla.  They hang out more and more often as we become closer friends with her parents.  You can't go wrong with butterflies. 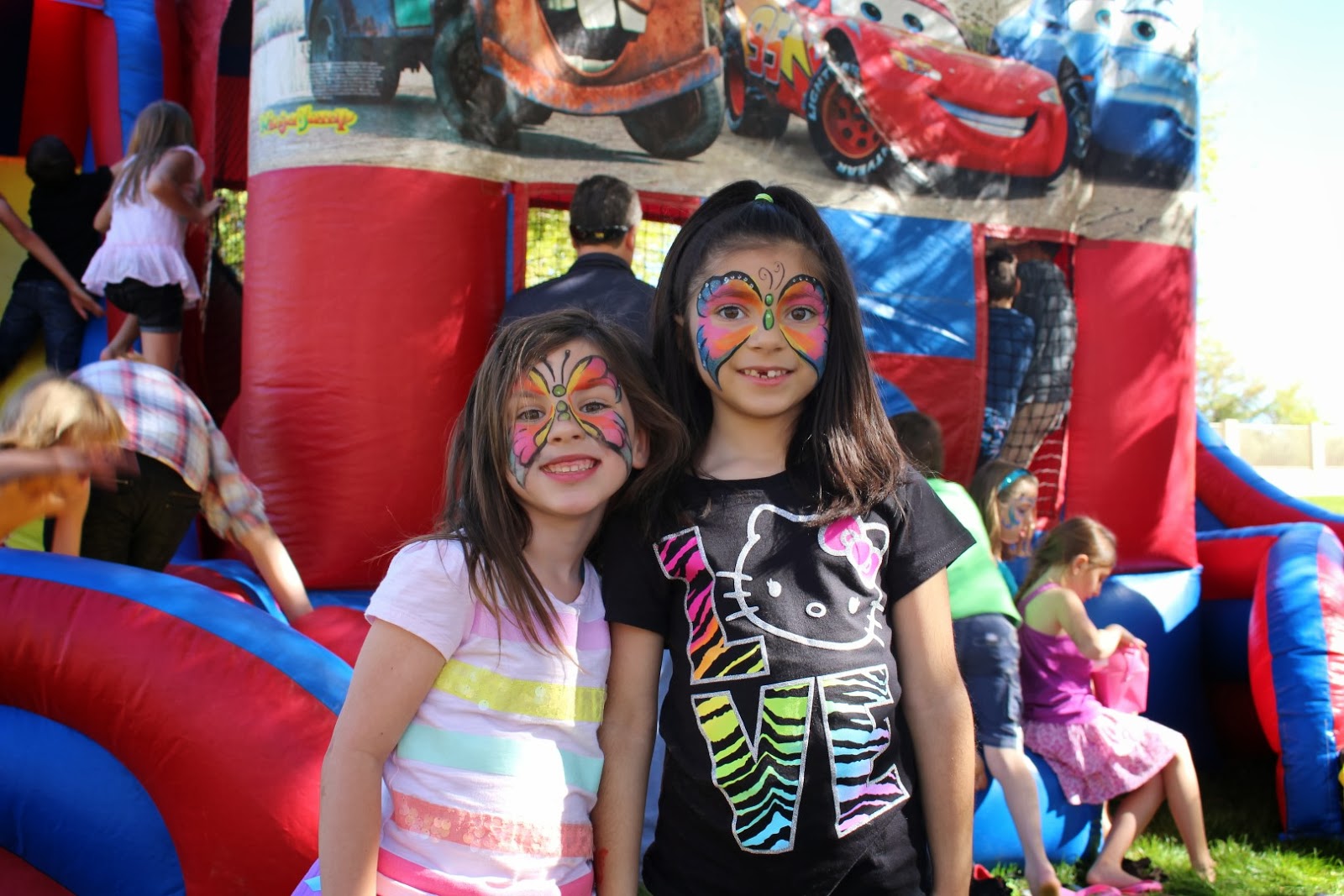 The party lasted about 3 hours.  Occasionally there was a lull in the action.  Kendra jumped in with her coach skills and directed them to play some games.  freeze tag?  you betcha. 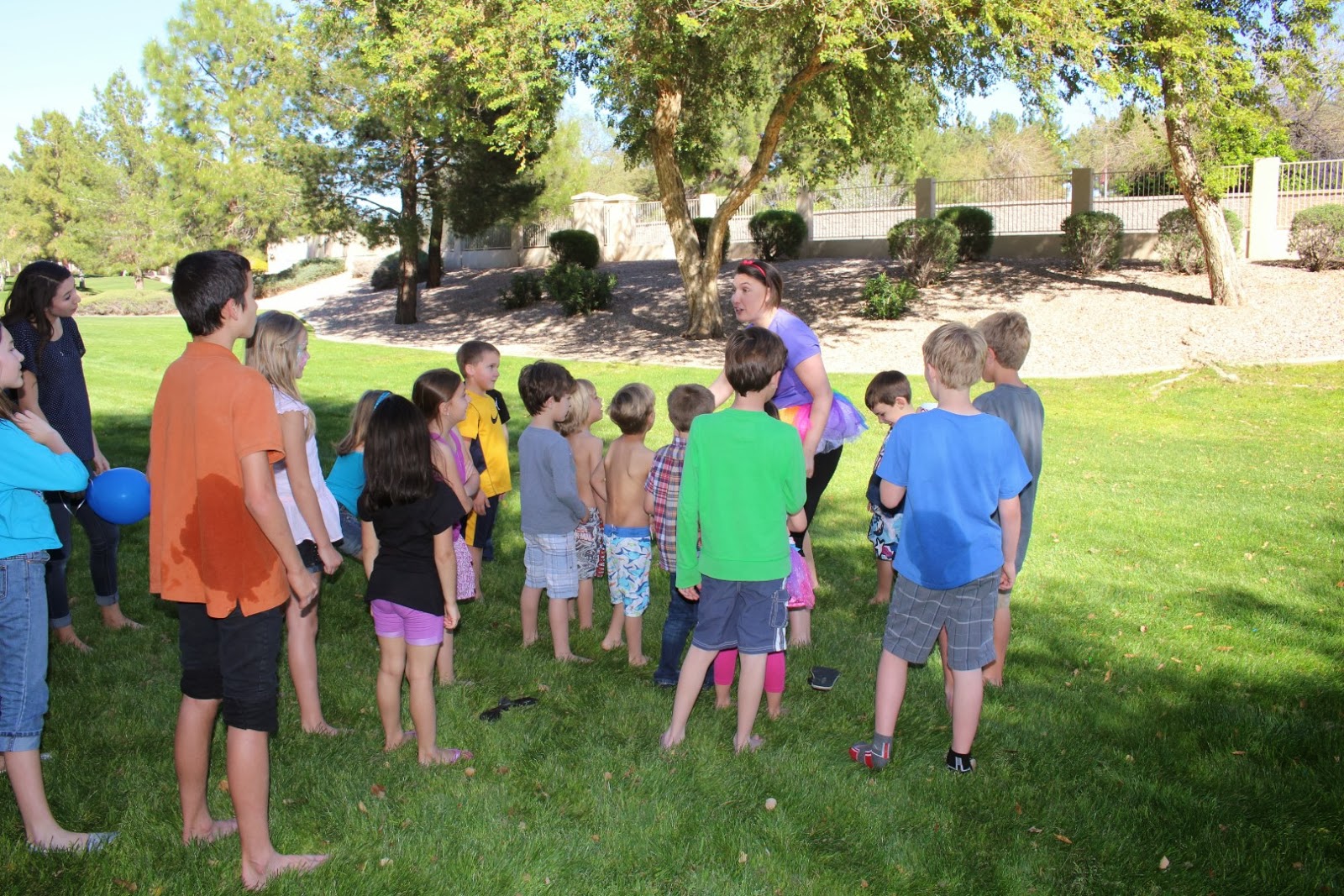 And not just coaching, but participating.  After a long week of busyness and cleaning and preparing for the party, Kendra still has the energy to run around with the kids. 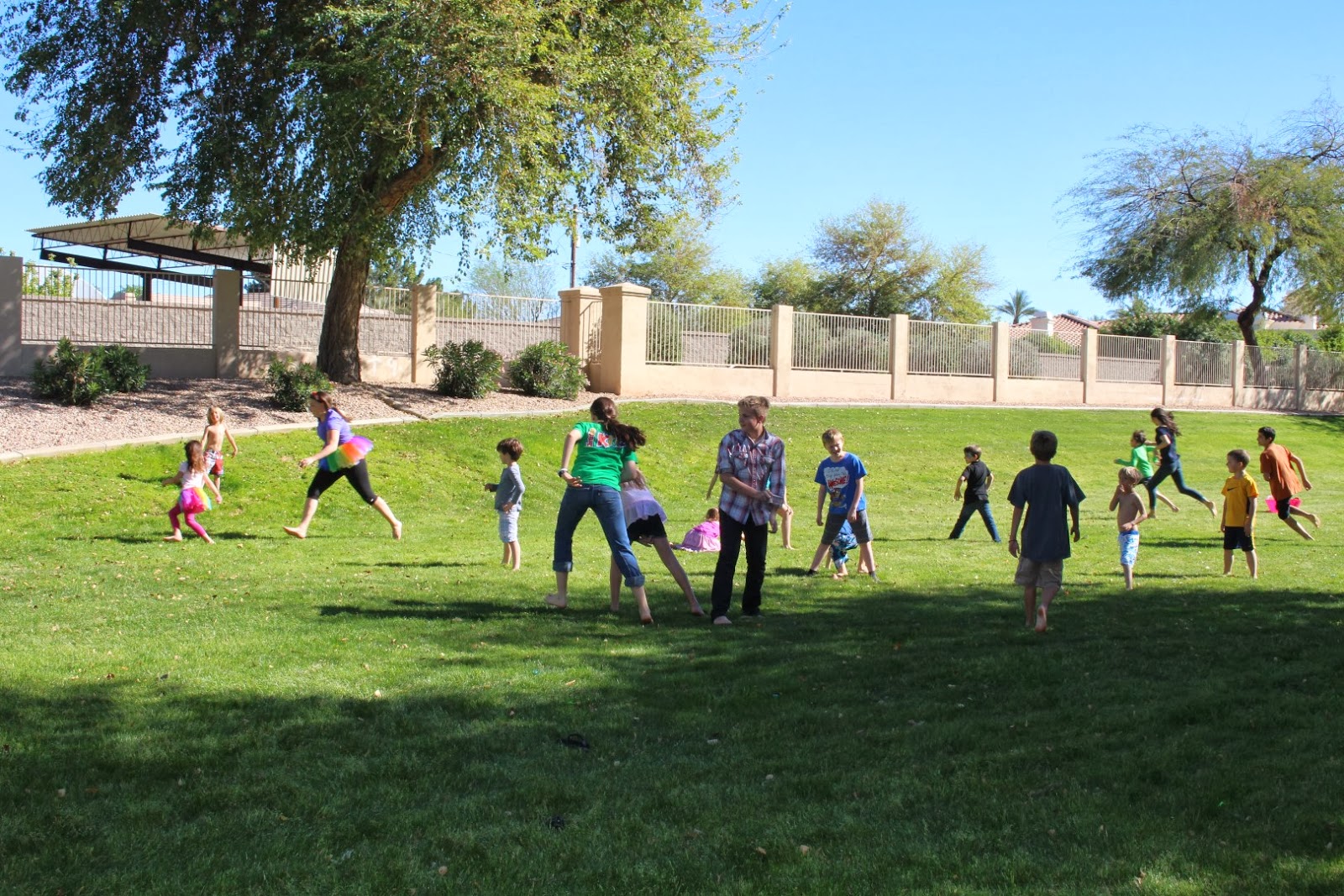 And after all of that she is my attractive, photogenic wife.  I like this picture most because I'm in it...  Just kidding.  Although I had to go get the camera and bring it back down to the greenbelt because as the party was winding down I realized I took every picture, but didn't make it into a single one.  10 years from now when Easton and Layla read the blog I'm sure they will be thinking, "where was Daddy when this happened?"  My response will be "I was there!  who do you think took all these pictures?"  but just to prove it, here I am in the picture instead of just taking it. 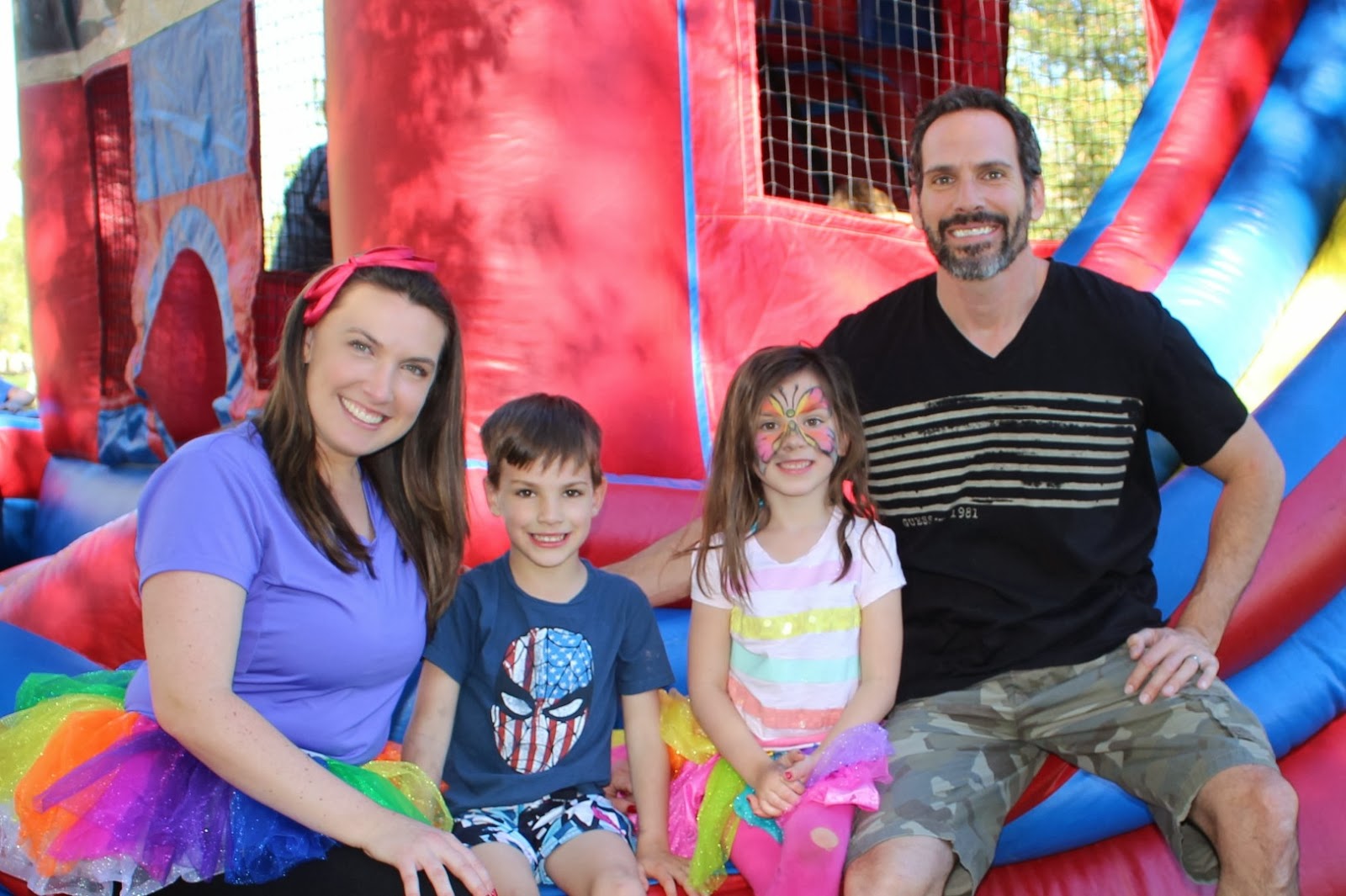 Betty was kind enough to stage a few birthday photos with us on the slide.  This one will be the official sixth birthday picture for the 4 Webbs. 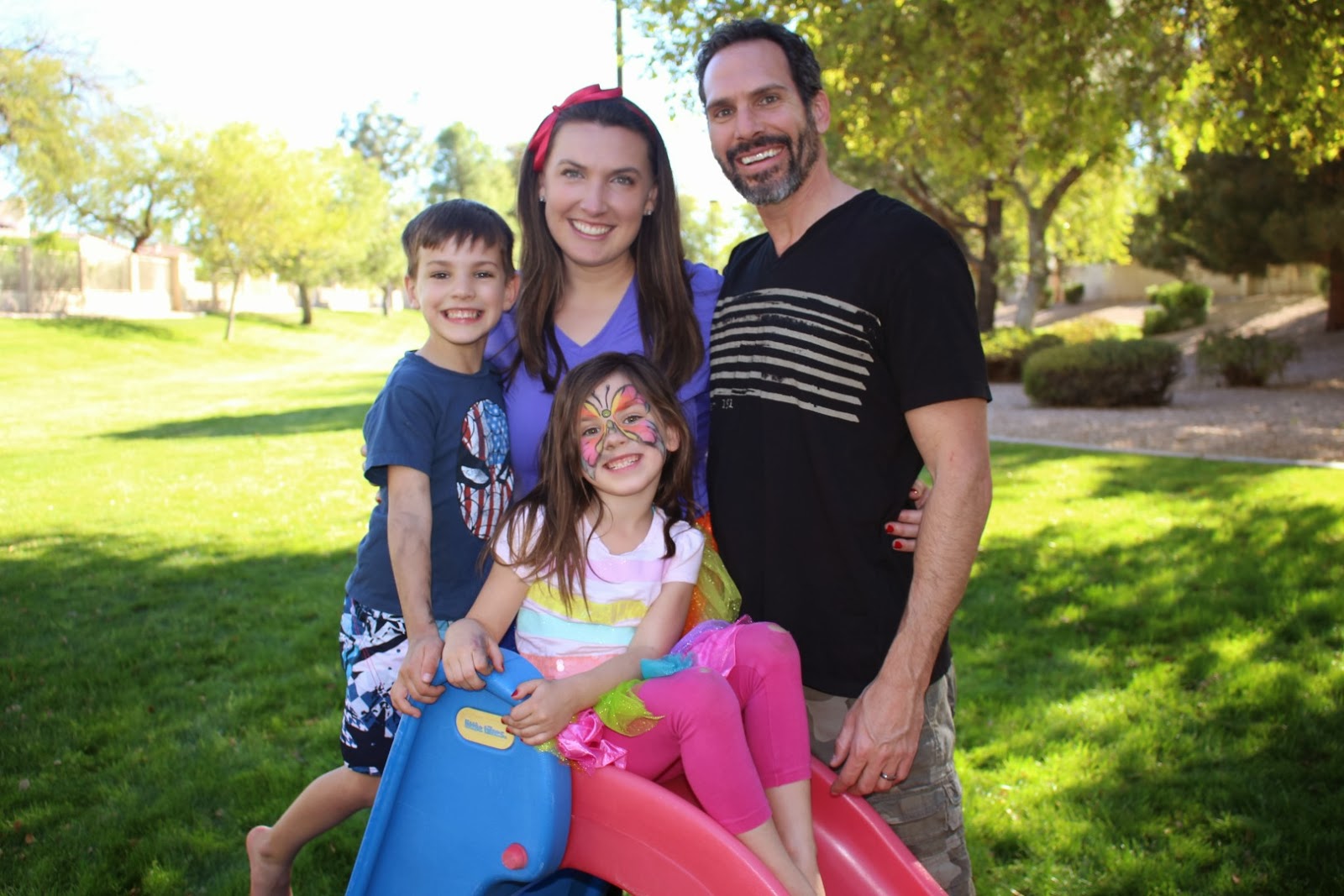 and our MVP is Ouma!  Having her here for these weeks was a special treat and a major factor in the excellence of the party.  My favorite segment of time spent with Ouma was lunch at the park with her and the twins.  Just playing with the kids and sharing a picnic lunch can be a highlight with the right people involved. 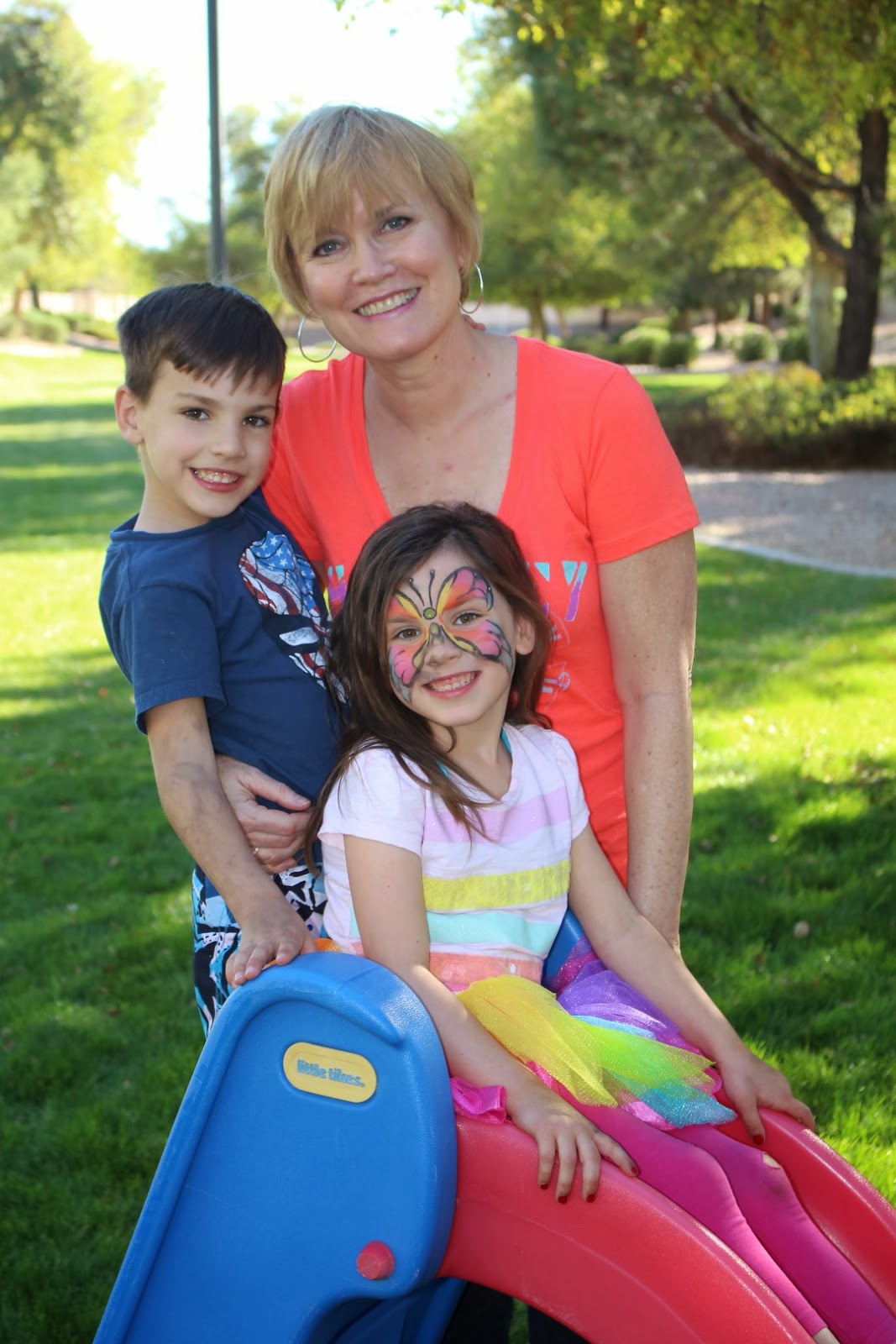 I spent less time with Ouma during this trip than any in recent memory.  I expected it to happen this way because of how much we crammed into 15 days, but I'm looking forward to our trip this summer when our responsibilities will be zero (other than my job).  No friends, no ministry, no mountain biking, and no house repair.  That sounds really sad if someone had none of those things in their life ever, but for Kendra and I it sounds like a much-needed, well-deserved break.

Ouma went home.  Oupa is happy, but the 4 Webbs are sad.  The only reason I agree "time heals all things" is that we'll get to hang out with both of them in just a couple of months.

Even though the birthday party lasted 3 hours we didn't waste any of that time opening presents.  Friends brought gifts, but we decided to save the gift opening for the next day with just the 4 Webbs and Ouma.  From our experience, there is nothing more boring than watching the birthday kid open gifts.  However, one thing we will change next year is to be sure to mark each gift AS IT ARRIVES with the proper name of who brought it.  About half of our gifts had no name or card with it.  for anyone who reads the blog and doesn't get a thank you card from us, sorry for the miss on our part to track who brought which gift.

Thank you all for the gifts and cards!  Easton and Layla were thrilled with what they were given.