The biggest project of Easton's short life is finally complete.  50 days ago I bought a box of Megablok parts from Craigslist for $10. 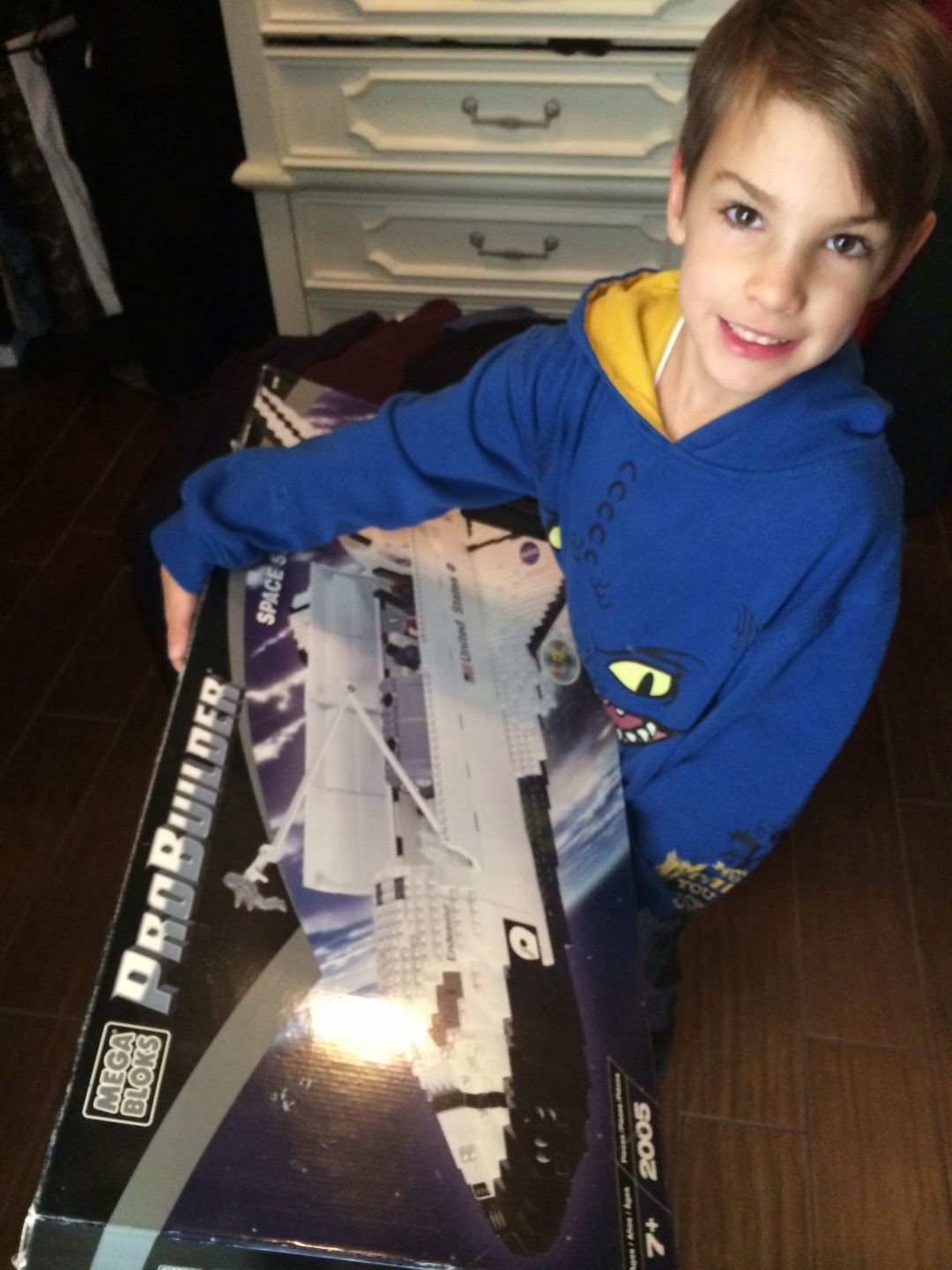 Easton and I started building it by working on two or three steps each night. 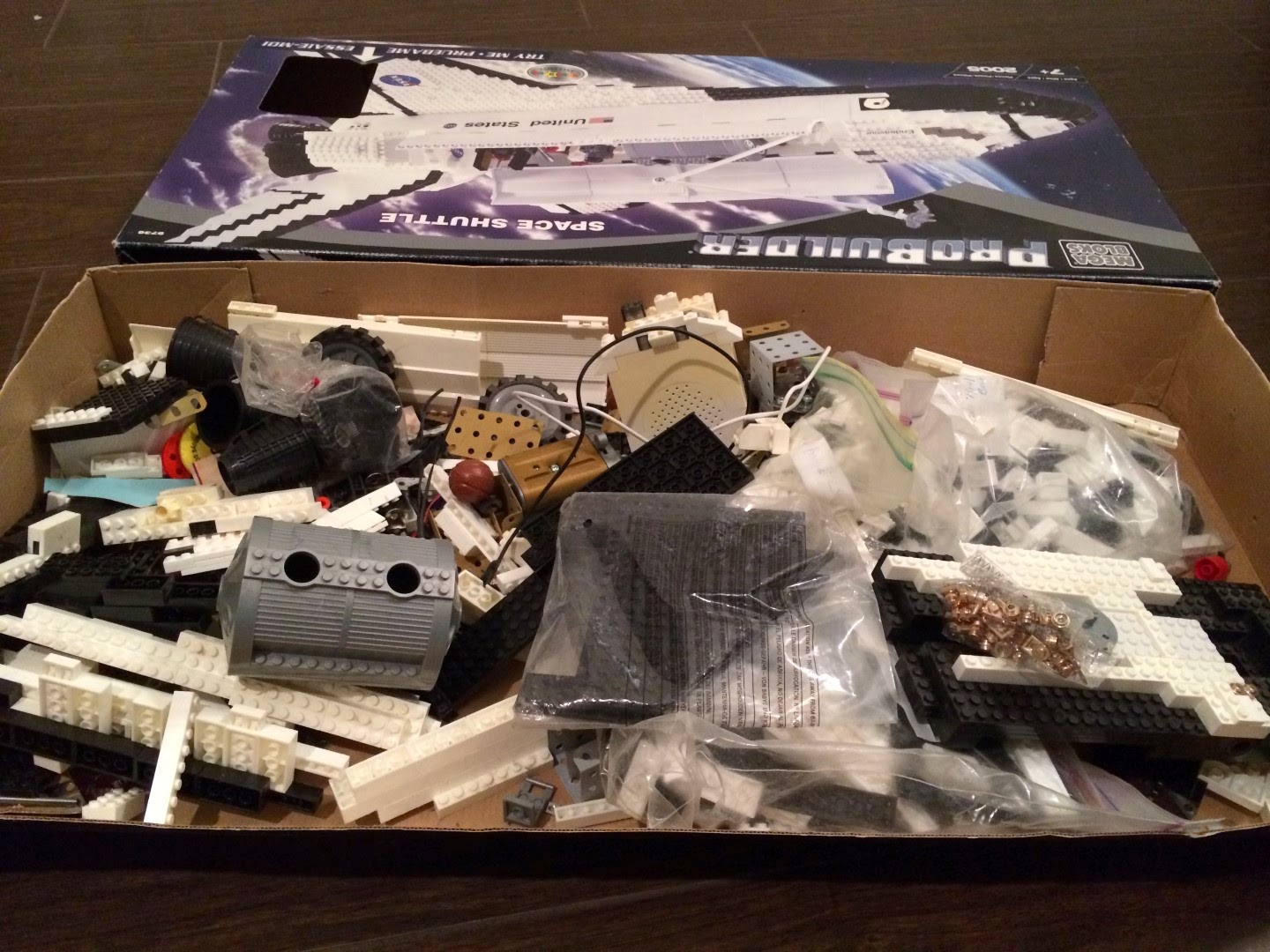 We built the base and as Easton lifted it up to take a picture he said, "This thing is going to be huge, Dad!"  Yes...  Yes it will be, son. 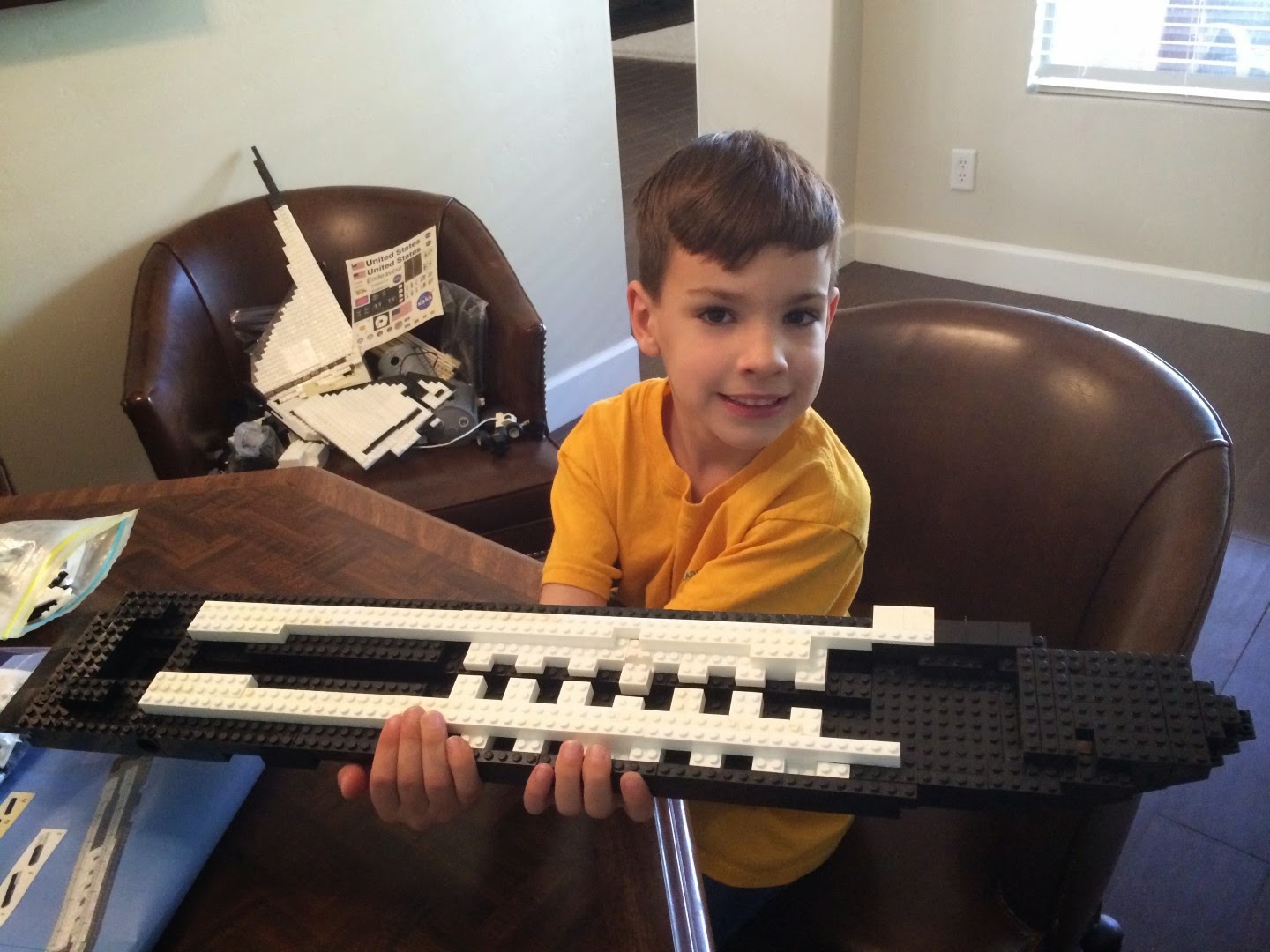 Each morning he would come in my room and along with asking for breakfast he would ask when we will be able to do another step on the space shuttle. 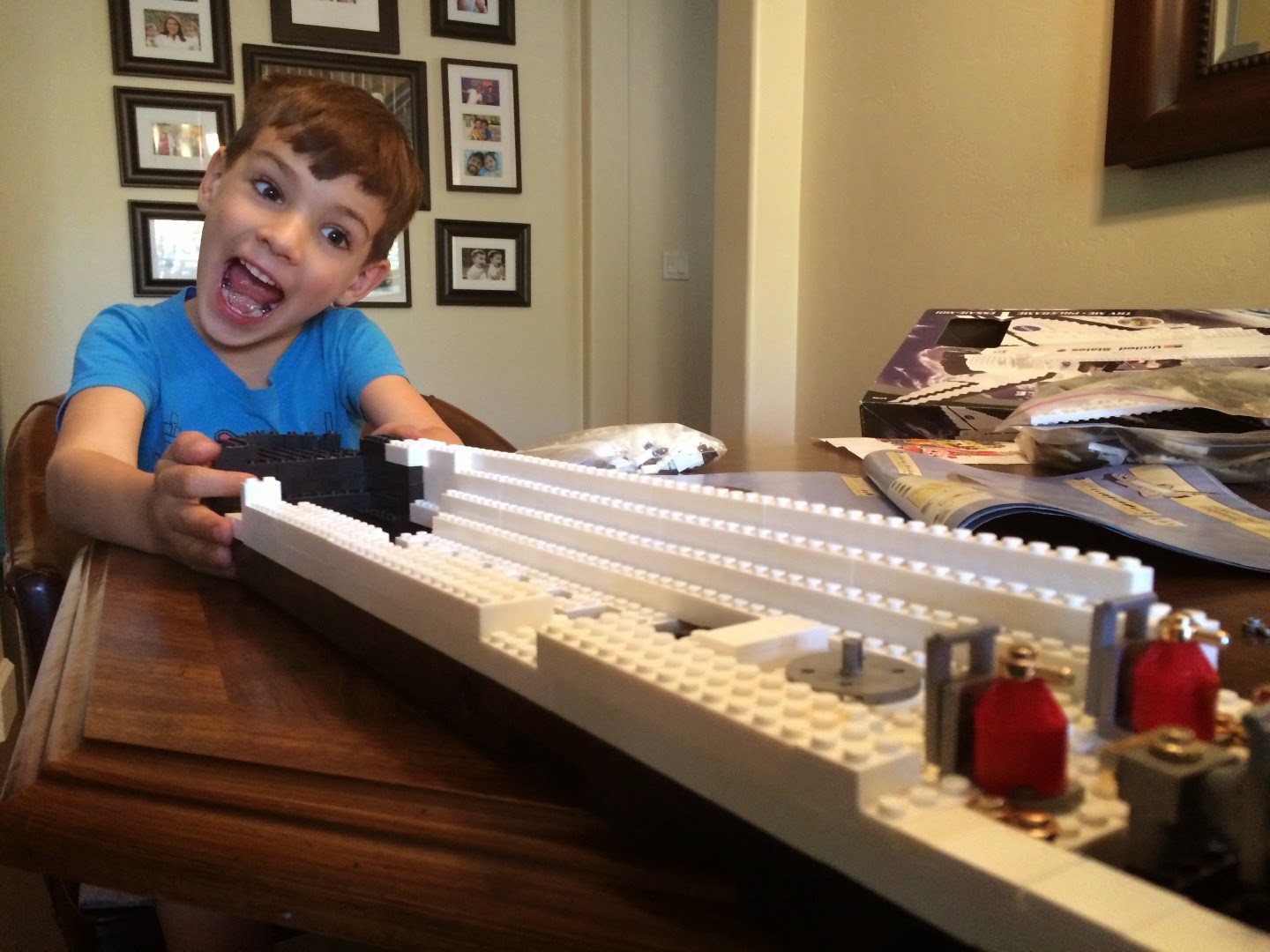 We made it this far and I realized we were missing many pieces.  There are supposed to be 2005 pieces, but my guess is that we were short about 100 or so.  I found another full, used set online at a goodwill auction and bought it for $8.  We continued to build what we could without the missing parts.  He did more than half of the work throughout the project.  Sometimes he would get parts and I would build.  sometimes I would get parts and he would build. 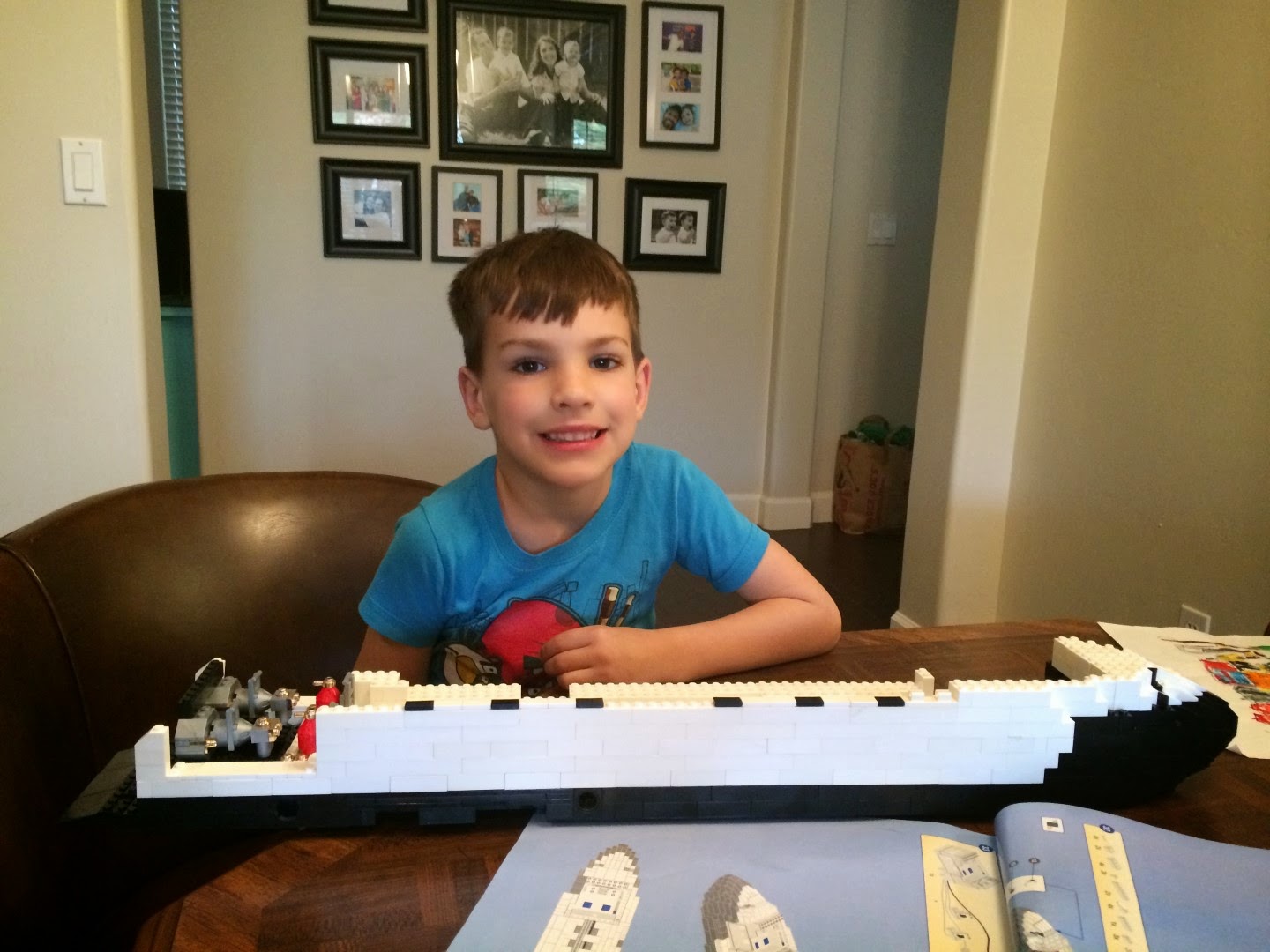 Little by little it began to take shape and look more like a space shuttle.   Our second set came by mail and dumped all the parts together, then sorted them according to size and shape.  That cut our build time in half because we didn't have to search through thousands of pieces to find one little part. 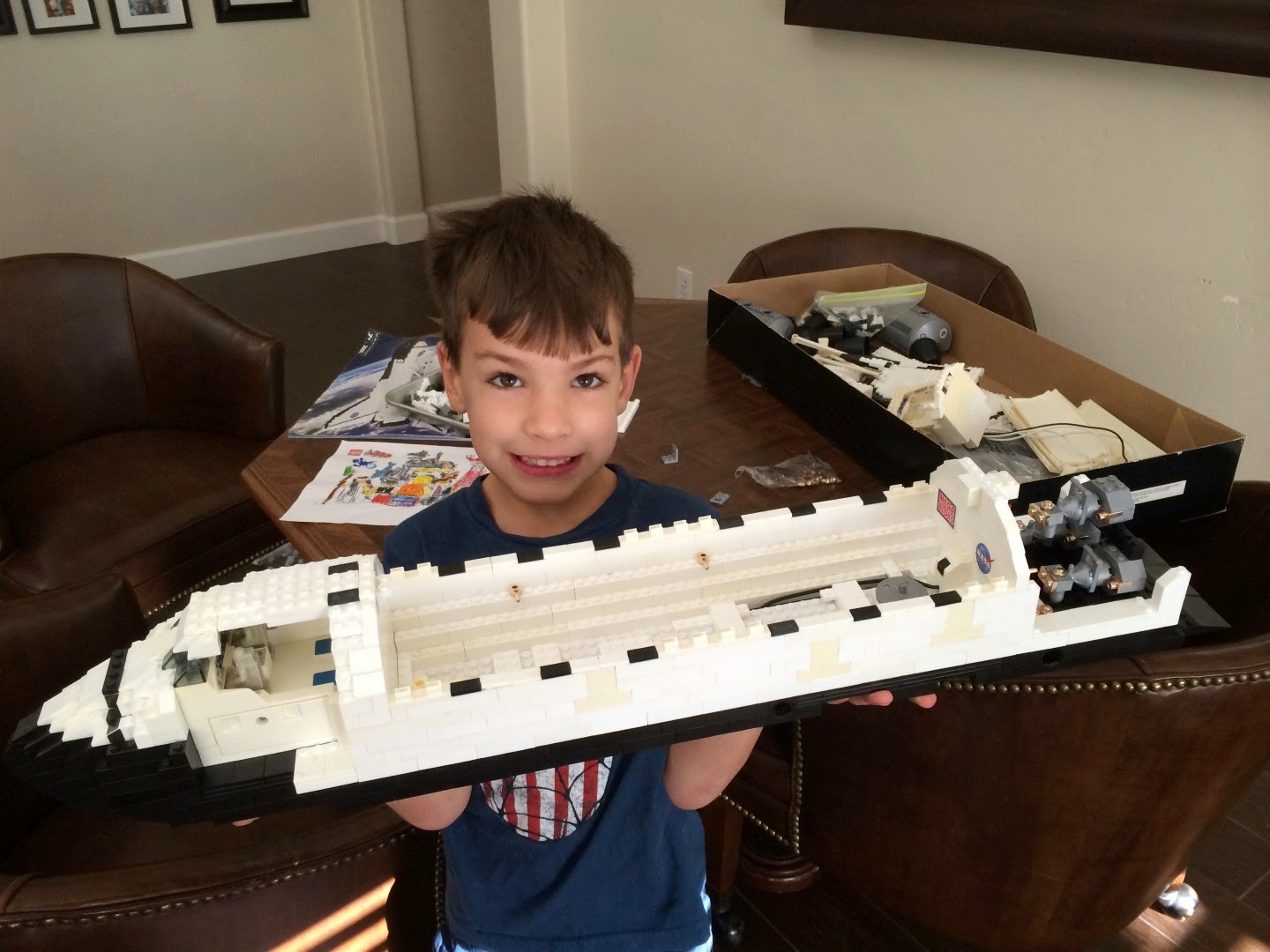 His math skills took a major leap forward.  He was doing addition, subtraction, and multiplication with lightning speed to determine how many parts to get and what size and shape they are. 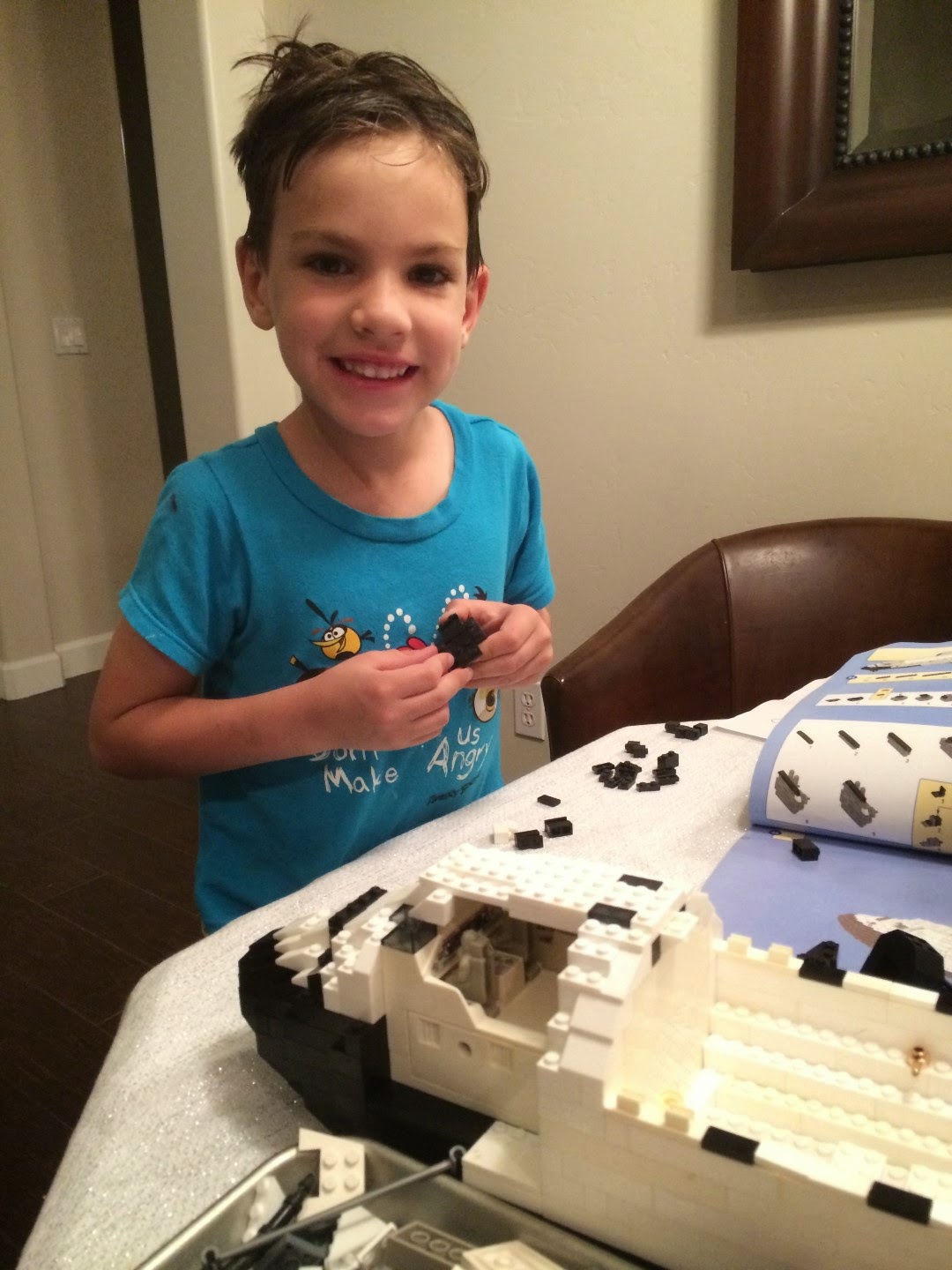 When we put the tail on he really ramped up passion for making progress.  He built the tail all by himself and couldn't wait to get it attached. 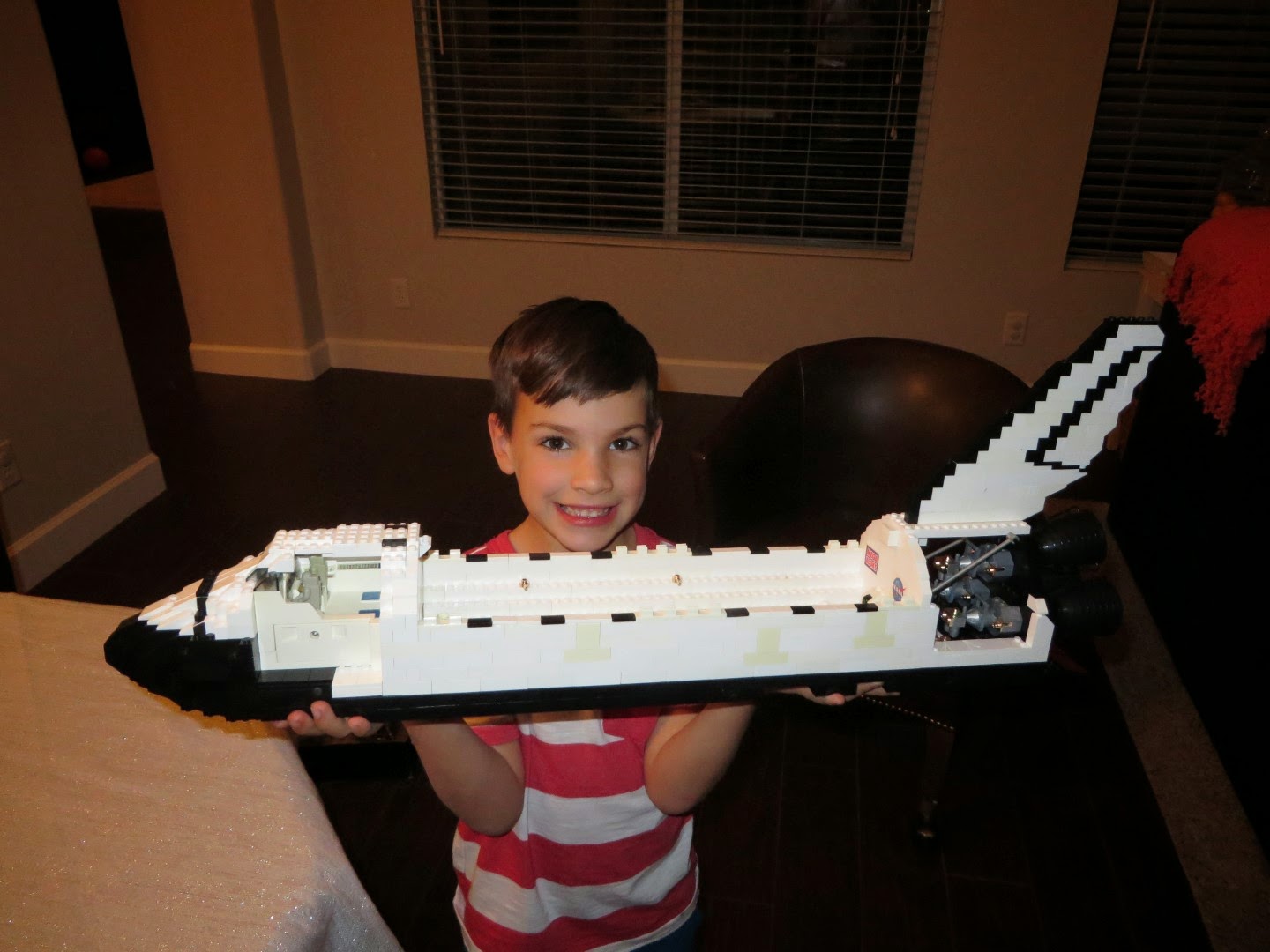 Building the wing was no small task.  I had to do most of it and I won't lie...  it was difficult even for me to keep concentration that long with arranging that many pieces in one step.  When we connected the wing to the body it was a magical moment. 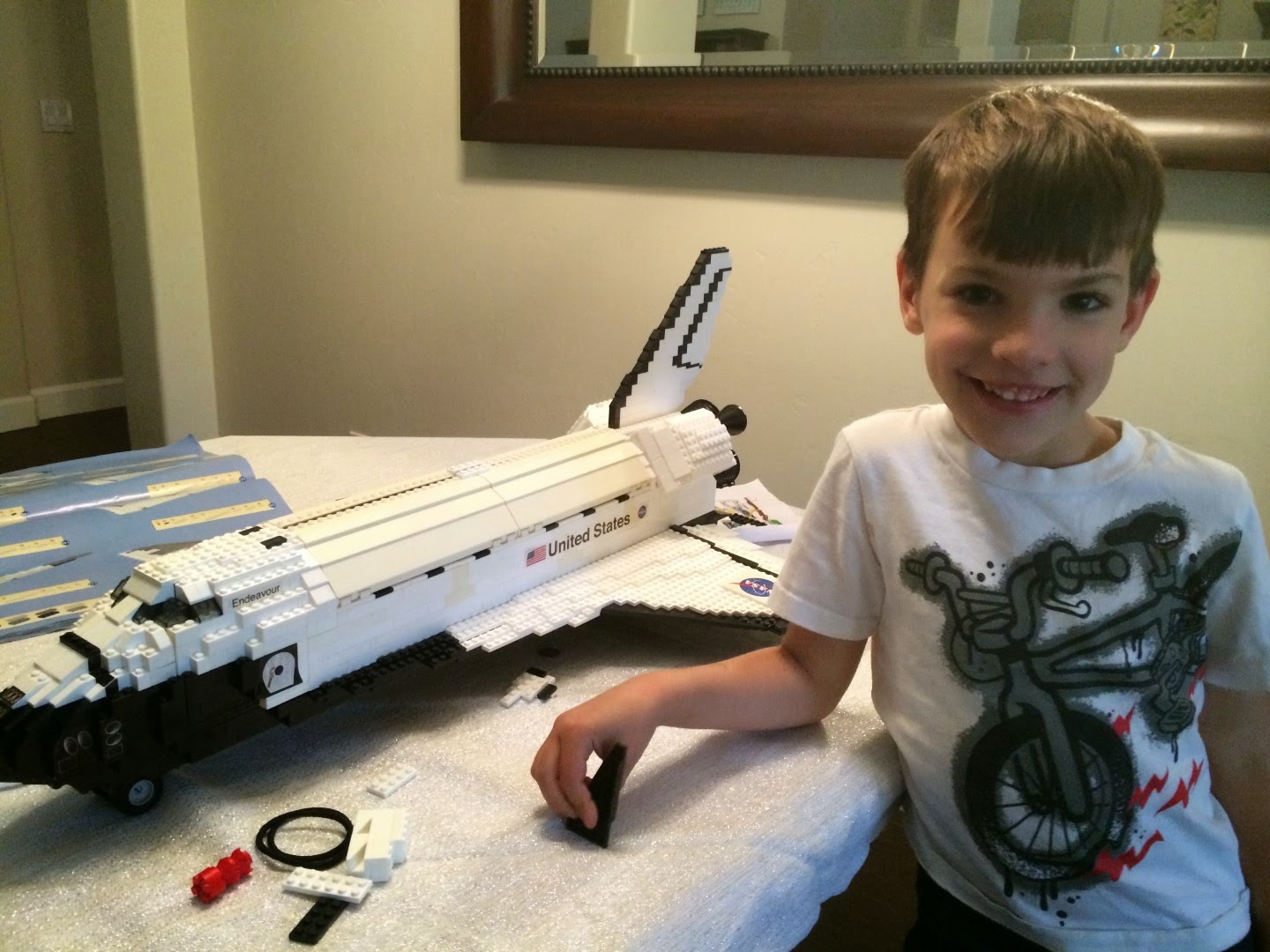 Then we built the other wing and connected it as the last step.  The booklet contains 189 steps.  The two of us worked through all of them together.  I never would have guessed this project would be such a challenge, but it was worth it to experience the time working together and seeing the satisfaction on his face. 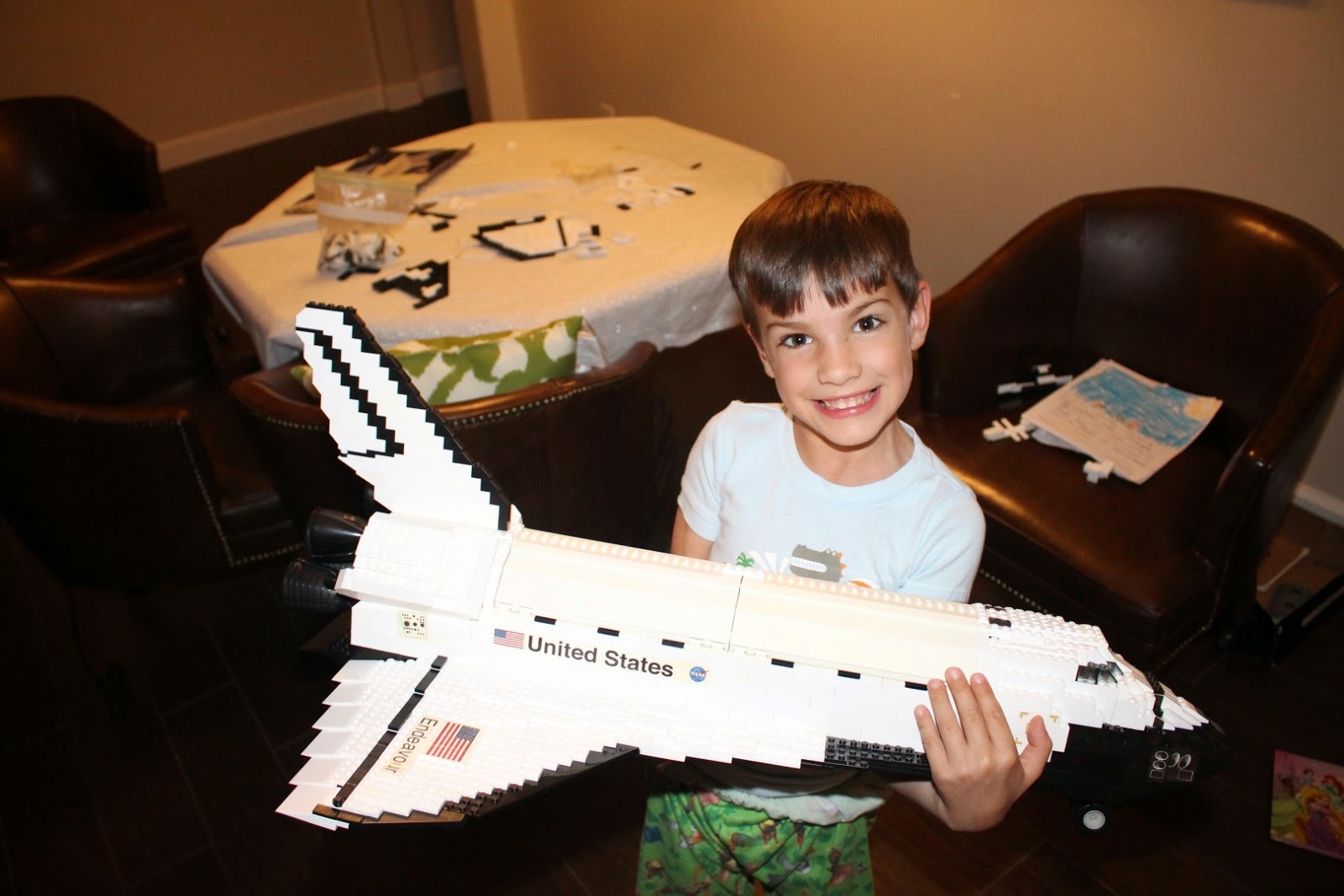 Some events and projects come to a close with a should shrug or fizzle.  When we realized there were no more steps we screamed and danced and high-fived and cheered.  Not that it was over, but that we could play with it now. 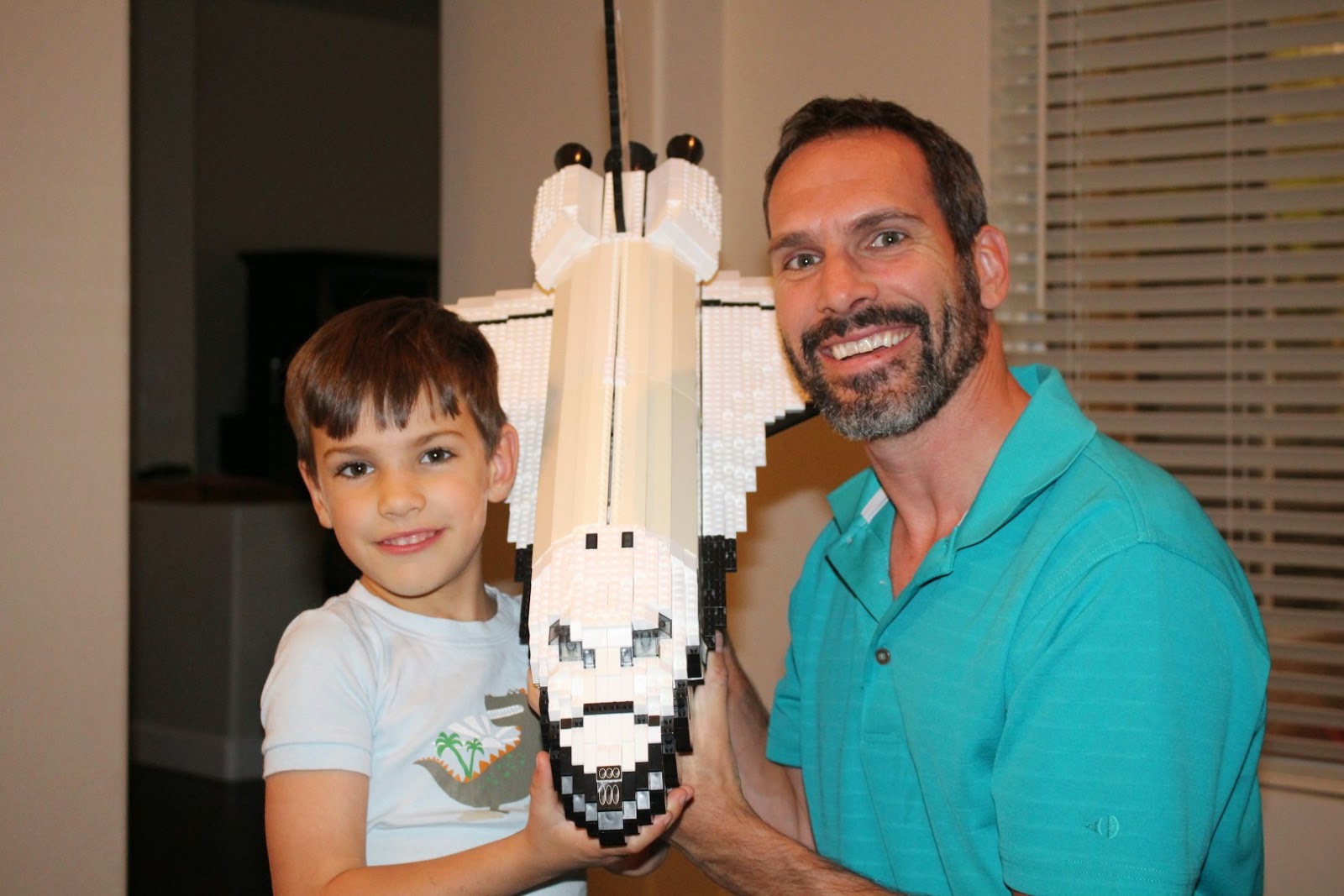 I don't know of any other six year old with the passion, focus, and perseverance to accomplish anything close to this.  I'm most proud of Easton for not giving up or losing hope.  We hit some serious road-blocks along the way, but he trusted me when I promised we were going to finish it no matter what. 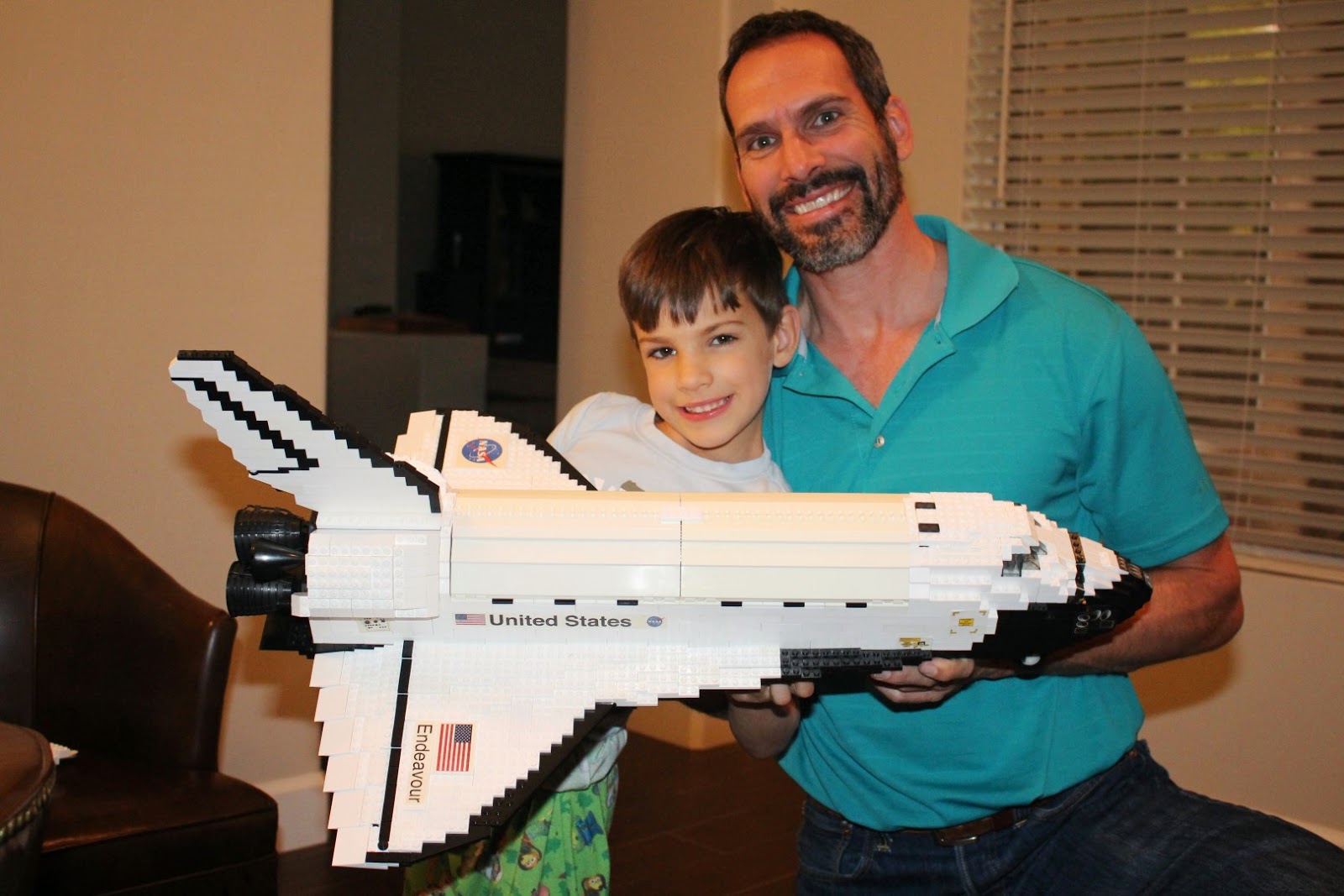 Not sure why this picture is funny to me, but it captures Easton's level of excitement really well.   This was the best $18 I've ever spent for Easton. 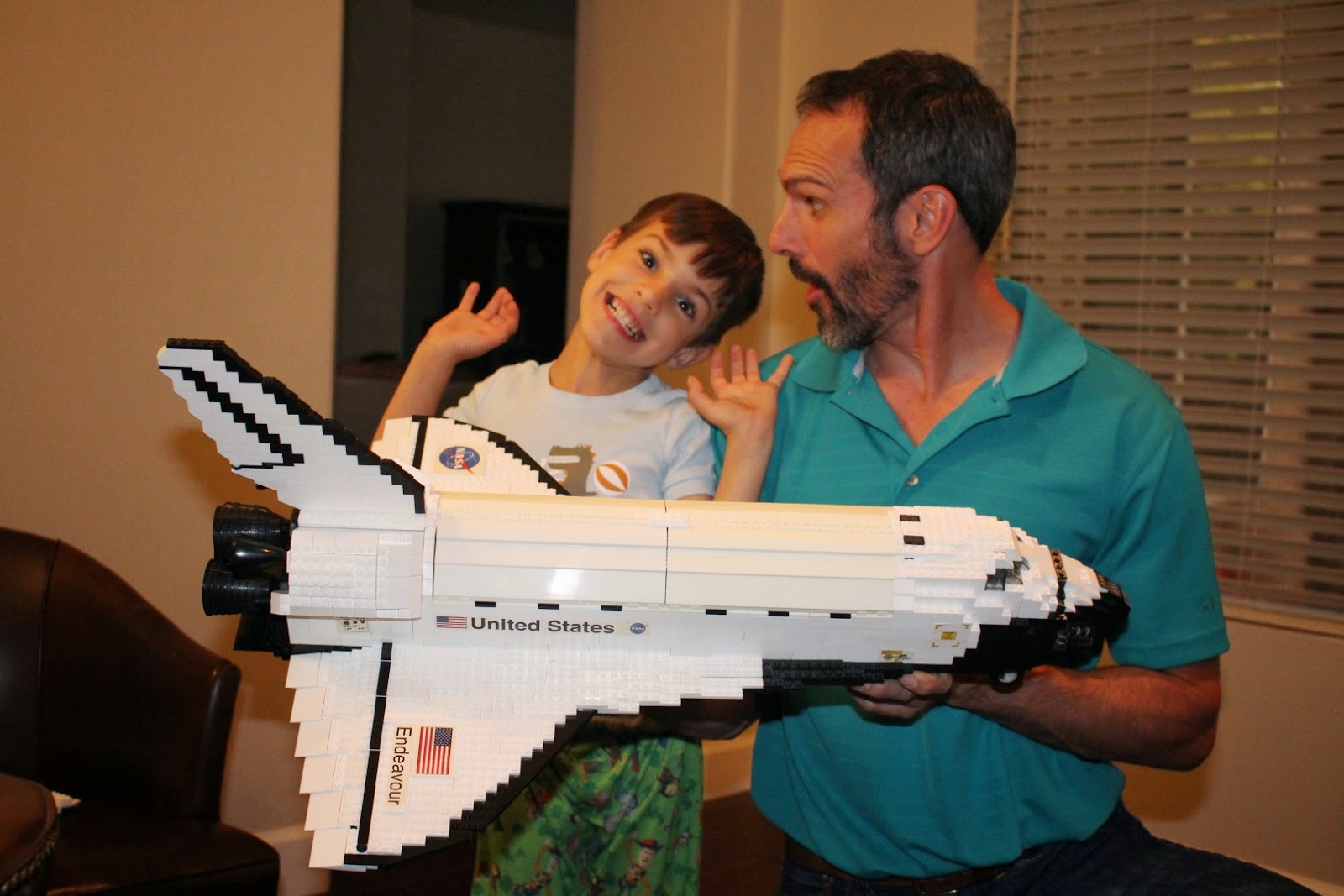 We placed in on the kitchen table for a day so we could showcase it.  All the items in the cargo area are meticulously built, down to the little satellite's solar panels and radar.  After all the hoopla I picked him up and spent a good five minutes expressing in words how proud I was of him for what he did.  He got a little uncomfortable because I was so adamant about him looking me in the eyes when we talked, but after I finished talking he was able to share his own thoughts and gave me compliments as well. 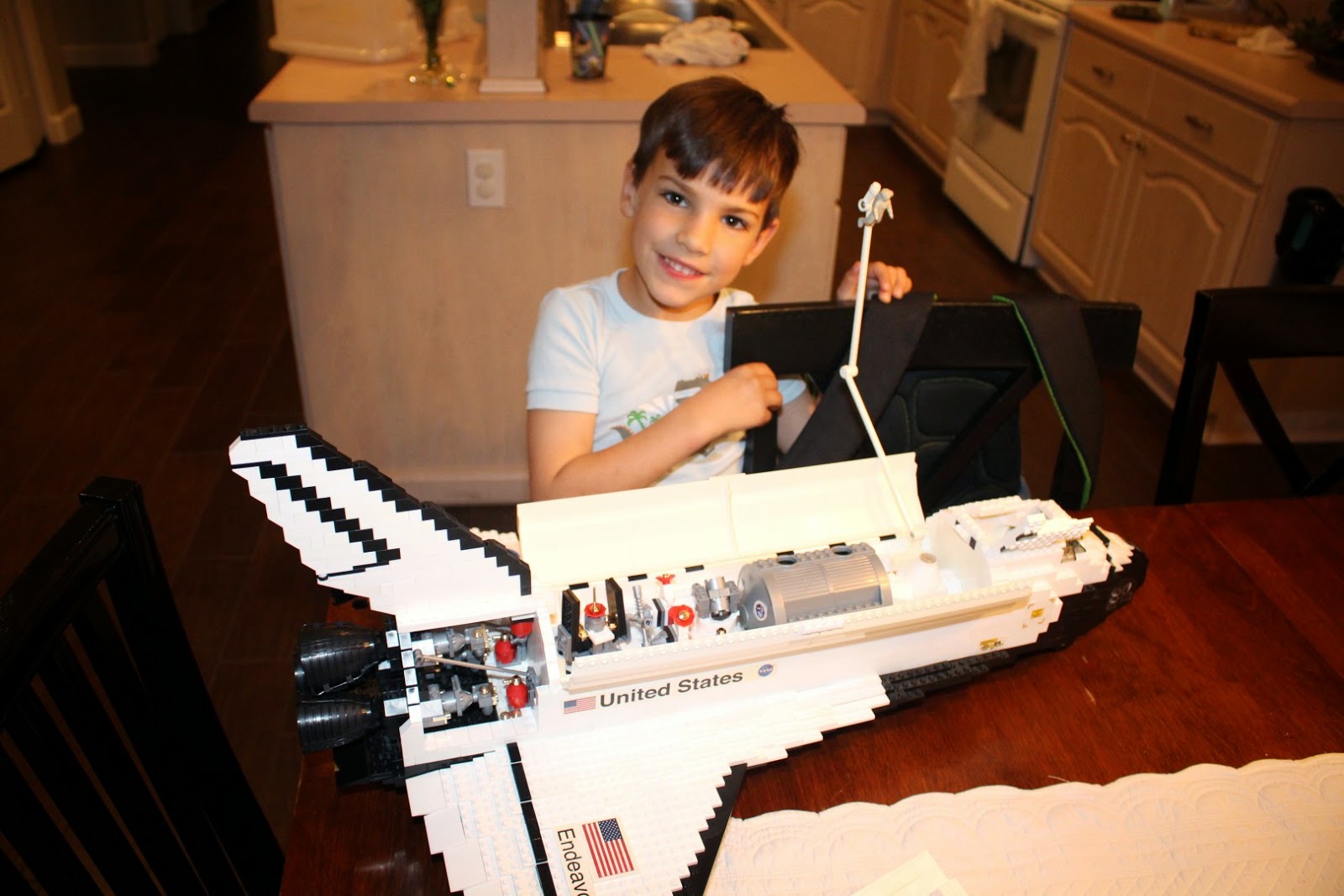 A thought ran through my mind that when he gets tired of it we might be able to donate it to the Arizona space museum.  We were just there and I know they don't have one like this!  Considering a new set costs $260 and it hasn't been produced since 2002, I think we have a rare, if not one-of-a-kind, space shuttle.

I found this Youtube clip of a time lapse photography that shows the progression of it being built.


The only downside of our project is that Layla got a little jealous a few times.  She didn't get equal Daddy time.  I'm OK with her feeling that way though.  She needs to know that although we love her no matter what, sometimes Easton is the focus and star of the show.  She has to learn to share the spotlight sometime and there's no better time than now to learn that lesson.  I did several special things with her along the way to make sure she didn't feel slighted or less important than Easton.  I wouldn't do anything different if I were to do this over again.  In the midst of our crazy quarter of ministry and events and giving and all the other tiresome things, it was very valuable to me to have this project to have a point of connection with Easton.  Just goes to show me that no matter how busy I am, there is always time for what's important.

Speaking of taking time...  I've only been able to ride with friends about once per month for the past several months.  When I get out I make the most of it!  Time with Jeff is always time well spent.  He is a big encourager and it's always refreshing to be around someone of the same caliber where I can just be myself. 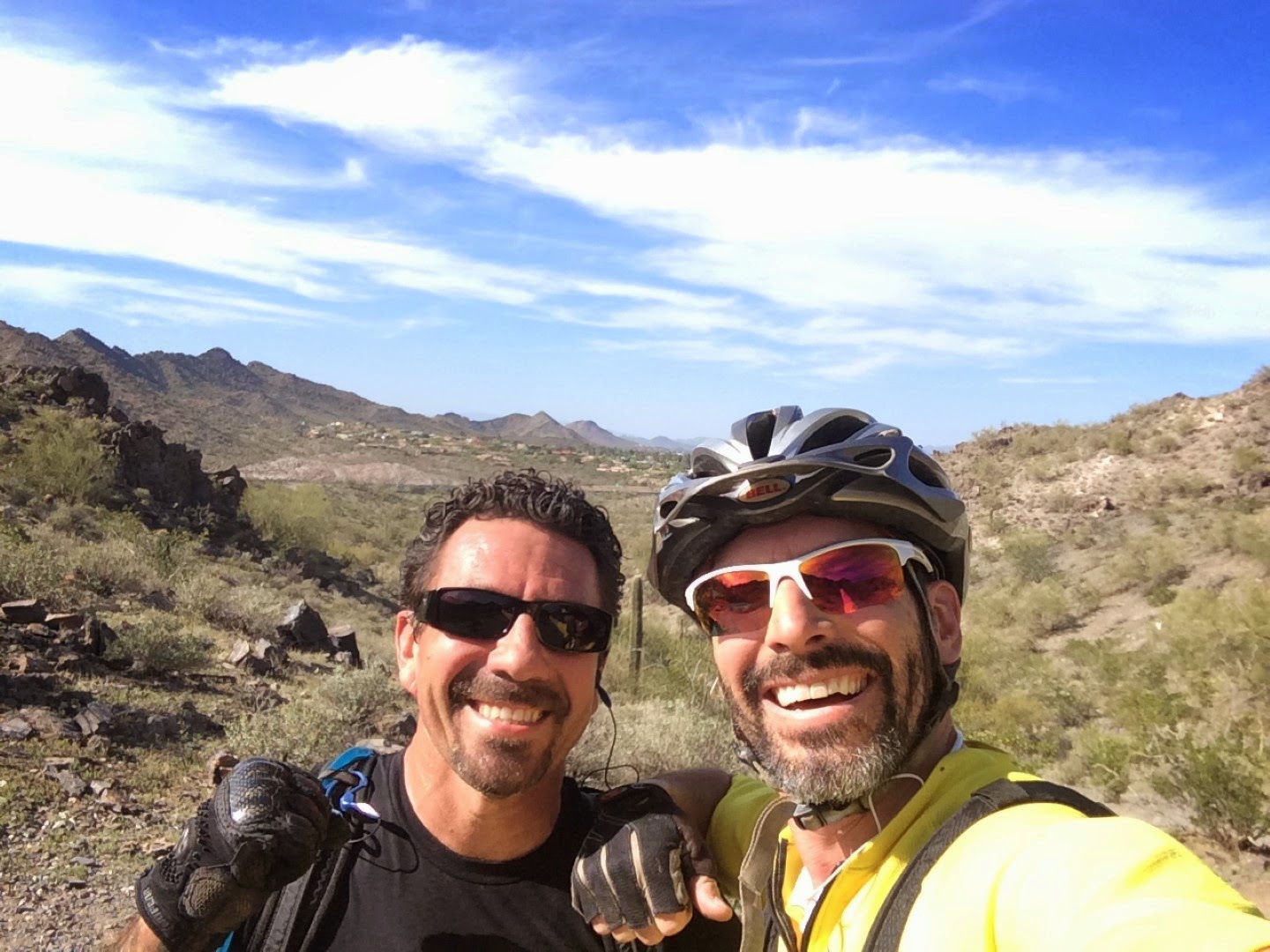 If you ever need to change out 600 lbs. of sand in a pool filter, let me know.  My pool guy was going to charge me $300 plus material!  I said, "no thanks, i'll do it myself."  That sentence rarely comes out of my mouth when it comes to home repair, but I got this.  My shop vac (thanks Dad) worked like a charm.  3 hours later i had an empty filter ready to be refilled.  Oh, the joys of home ownership.  I will gladly take a couple of days worth of free time to spend the summer in our wonderful backyard swimming. 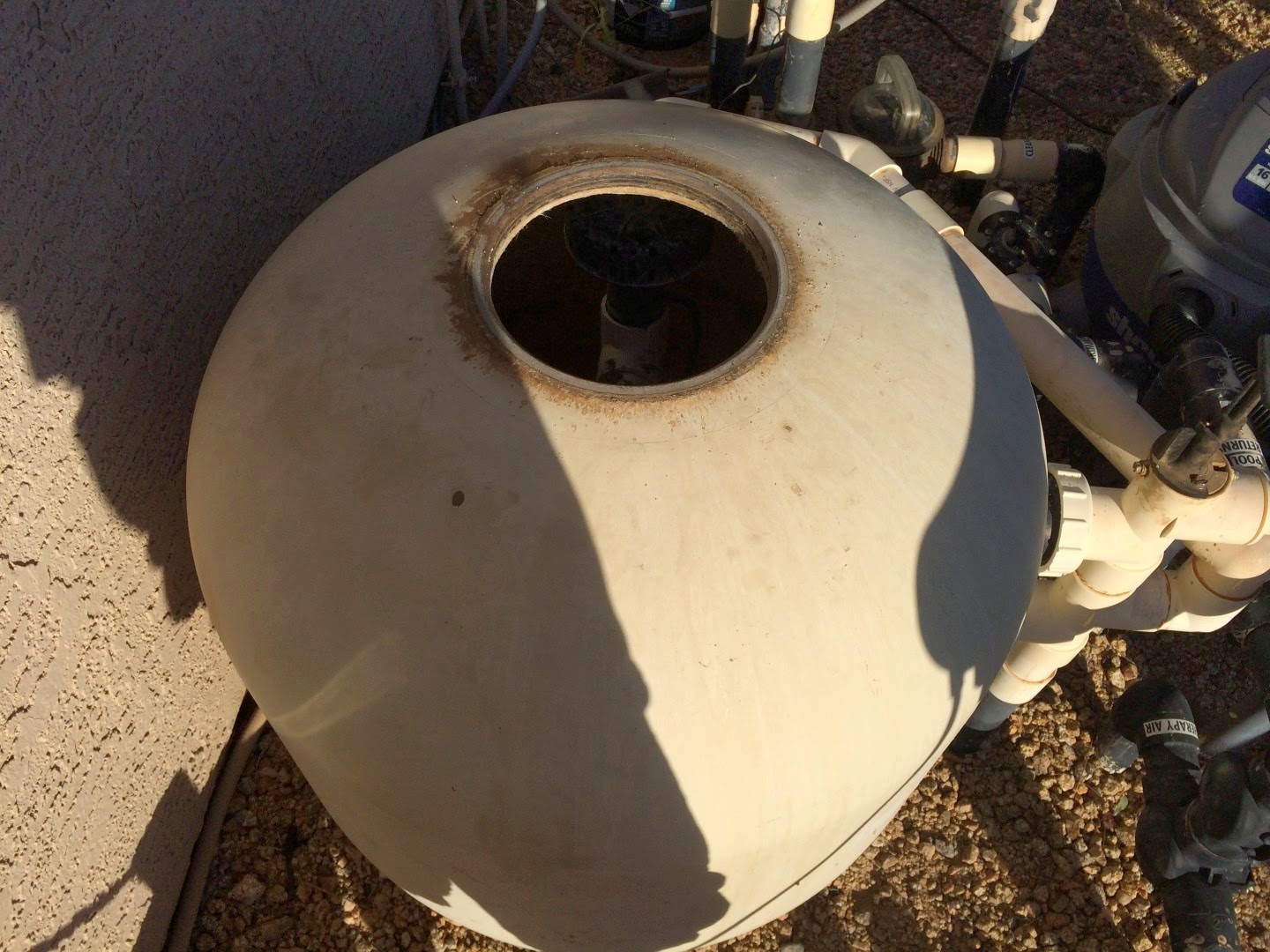 Haboob!  That's a funny word.  It's even more awkward to be using that word in March.  Usually the monsoon dust storm created by collapsing thunder storms don't start until July.  I think it's going to be a long, hot summer.  Here's a panoramic shot of the 1,500 foot-high wall of dust coming at us.  I took this picture, then drove home quickly to batten down the hatches.