Q1 is almost over, thank God.  Each day, each week, and each month has its own finish line we've been working towards.  This past week was another crazy one with little to no down time, but we accomplished so much!  Ouma is still here being a part of our daily life and more importantly spending quality time with the twins.

I had good opportunities for Daddy time so that Kendra and Ouma could focus on the birthday party preparation.  On Saturday I surprised the twins with a trip to aviation days at the Mesa airport.  I have several other pics on my camera at home, but this is a good preview.  We arrived early to beat the heat, but so did a thousand other people.  We parked, then rode a shuttle bus to the entrace on the tarmac.  The bus ride was entertaining for the twins.  it's the little things in life that bring the biggest smiles for a six-year-old.

The entrance was a mine-field of parent traps.  bounce houses, rock climbing walls, and trinkets for sale.  I am grateful for Easton and Layla's happy, obedient hearts.  Many parents were stuck with bratty, crying, screaming kids who reacted exactly the way they were taught by their parents:  tantrums.  Yes, I know there are autistic kids and other one-off situations to consider.  Even so, there were dozens of families stopped dead in their tracks because one or more of their brats, I mean kids, were not told what the word "no" means.

I've played this game of chicken with the twins a couple of times and they figured it out quickly.  I say, "no we will not play on the bounce house."  Then I explain why "because tomorrow you have your very own bounce house for EIGHT hours of all the fun you can stand for your birthday party."  and I continue with, "If you obey we get to go see airplanes.  If you disobey we will go home right now."  then I top off my calm explanation by saying, "you two are so powerful to choose what we do.  What is your choice?"

And with that we held hands and walked through the row of hawkers and time wasters.  Layla pointed and asked, "why is she acting like that?"  Her reference was to a girl convulsing on the ground screaming at her mom to get her way.  My simple answer was, "She doesn't understand good and bad consequences because her mommy hasn't taught her that yet."  Hearing her describe that behavior as completely incomprehensible was music to my ears.

We wandered onto the tarmac and made our way around to each plane, vehicle, and helicopter.  The 20 minute line to get a tour of the inside of this monster plane was well worth it. 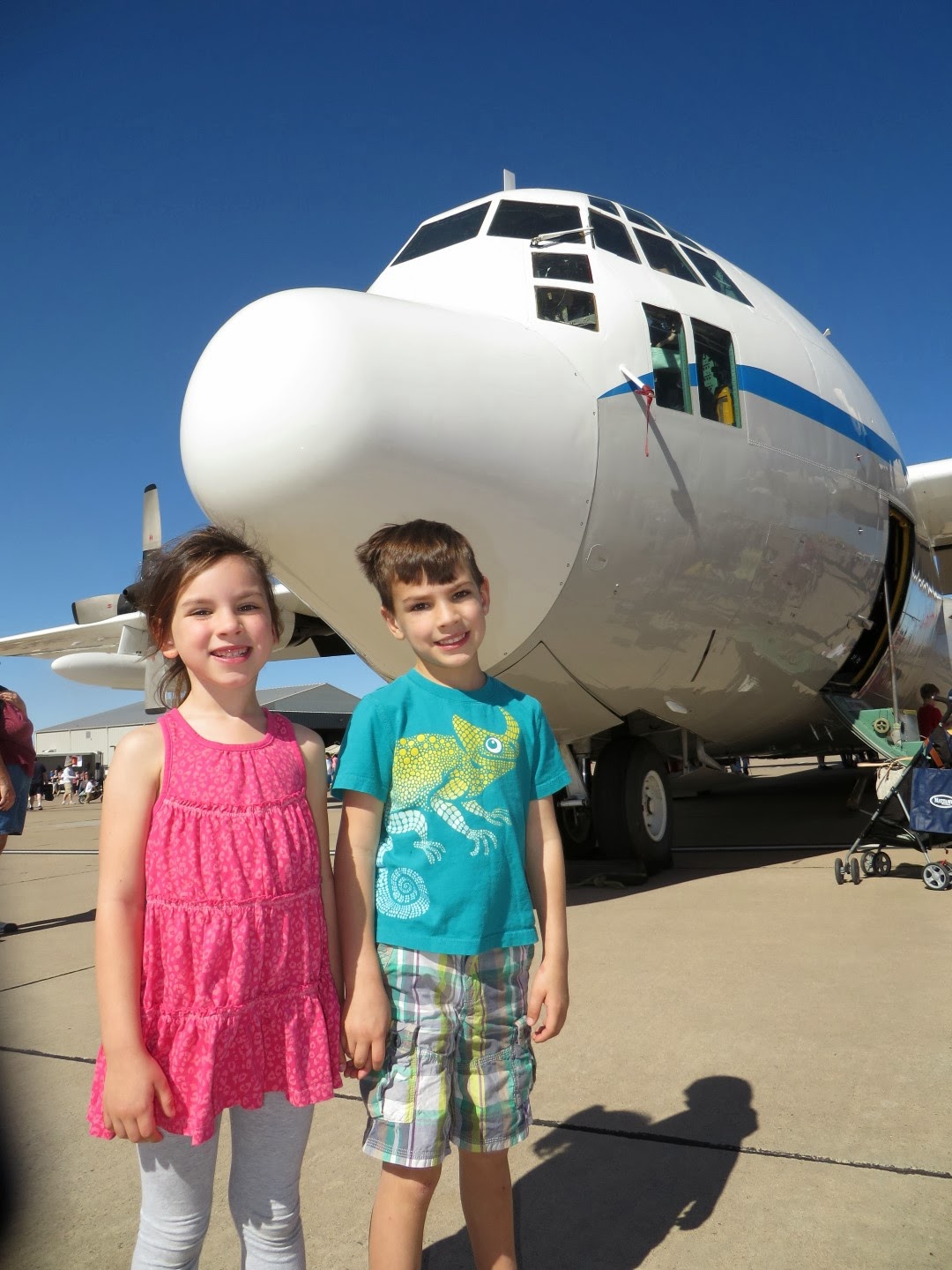 It is used for paratroopers and spraying chemicals out of the back for oil fires in the ocean.  I think that's what the tour guide said the plane was used for... 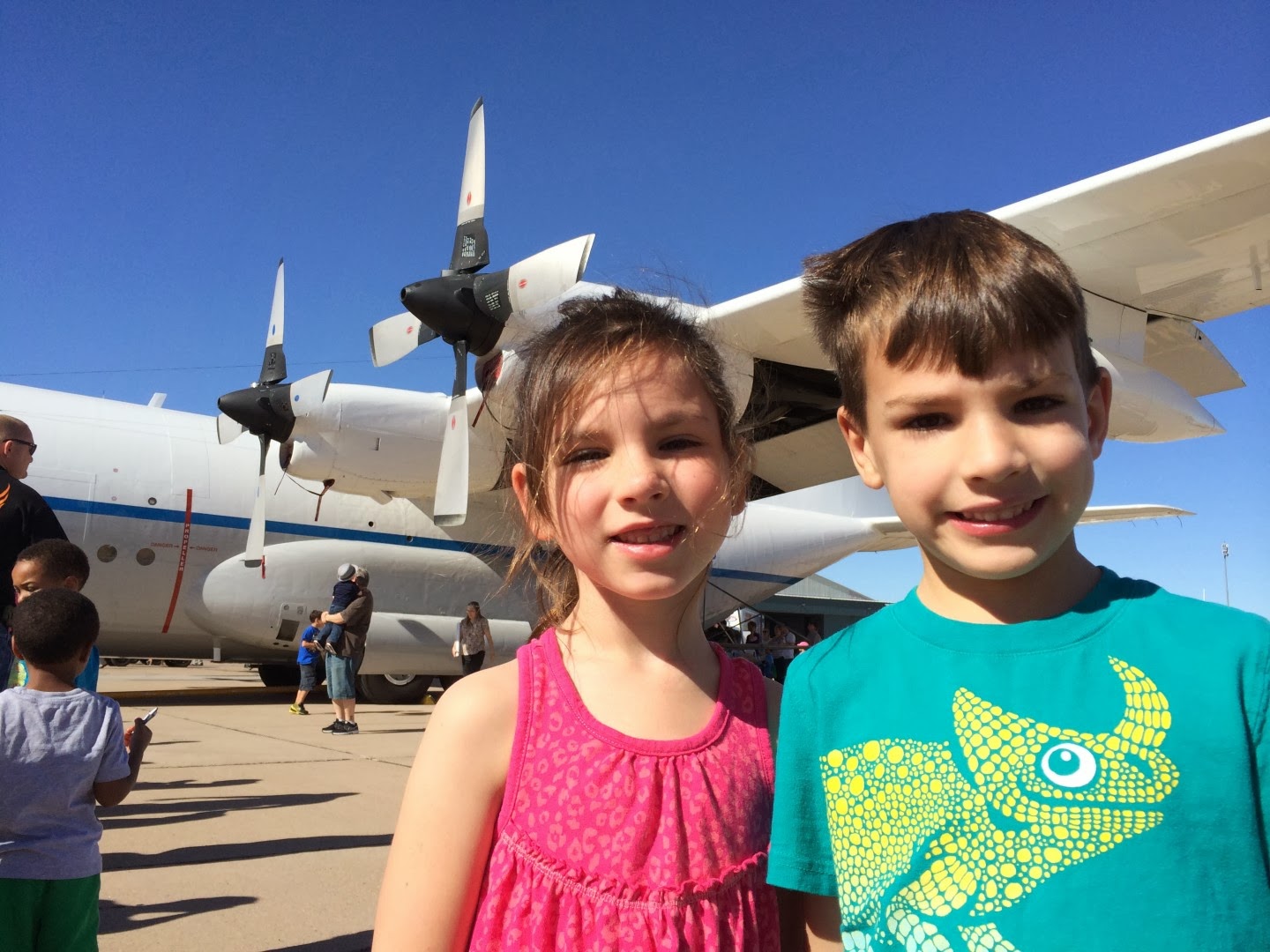 I sure hope the pilots check ever knob and switch before take-off because I can imagine things would get completely out of order with this many kids sitting and playing in the cockpit.  Easton and Layla were well behaved while at the same time enjoying the moment of experiencing what it is like to sit in those seats. 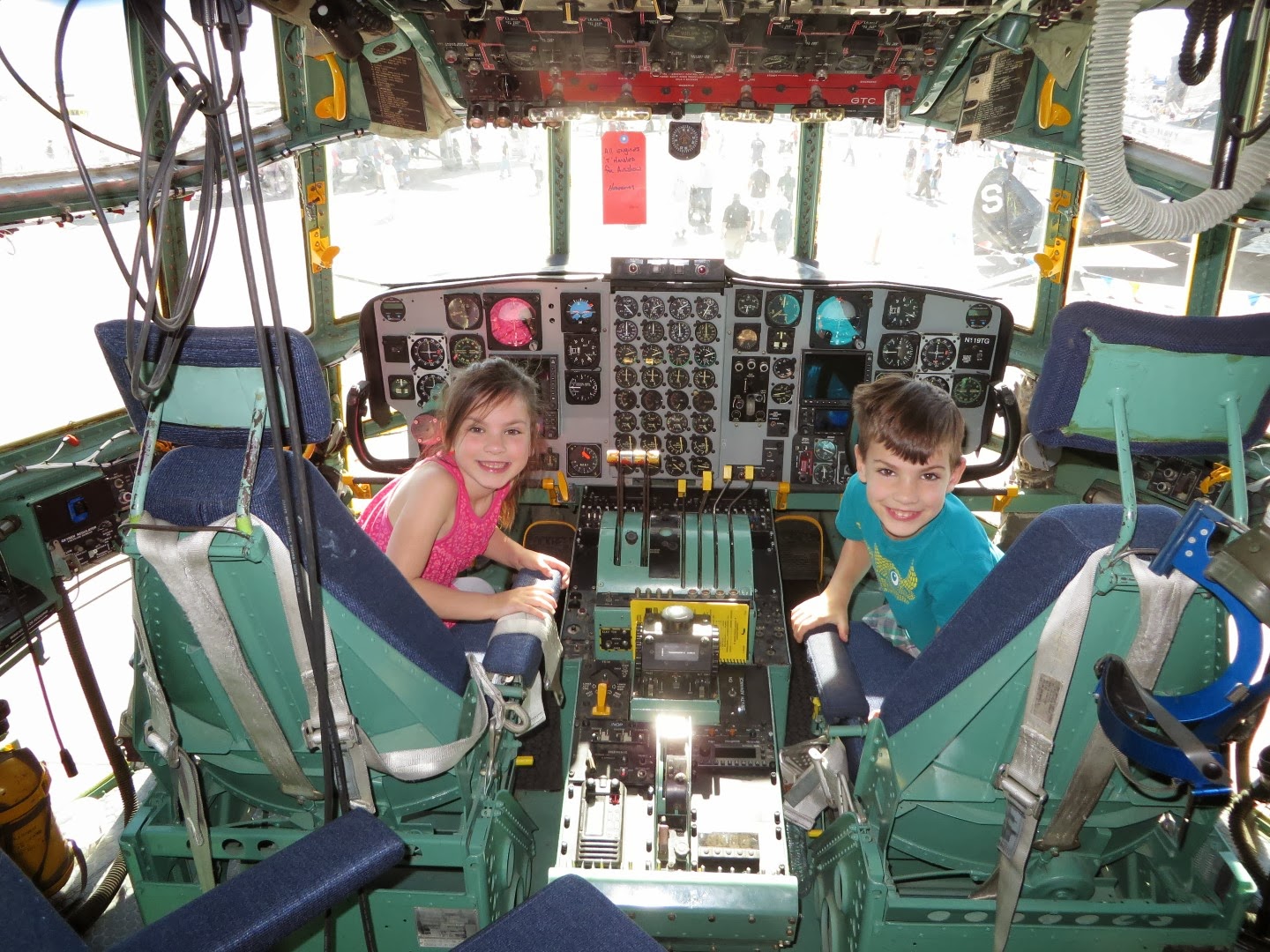 A lady was dressed like one of the army girls from decades ago.  Her brown skirt and top along with her heavy make-up turned out to be an interesting magnet for old war heros on the tarmac.  She stood in front of this plane below and held her hand with a stern salute.  Layla saw her do that and did her best to mimic the army lady's actions. 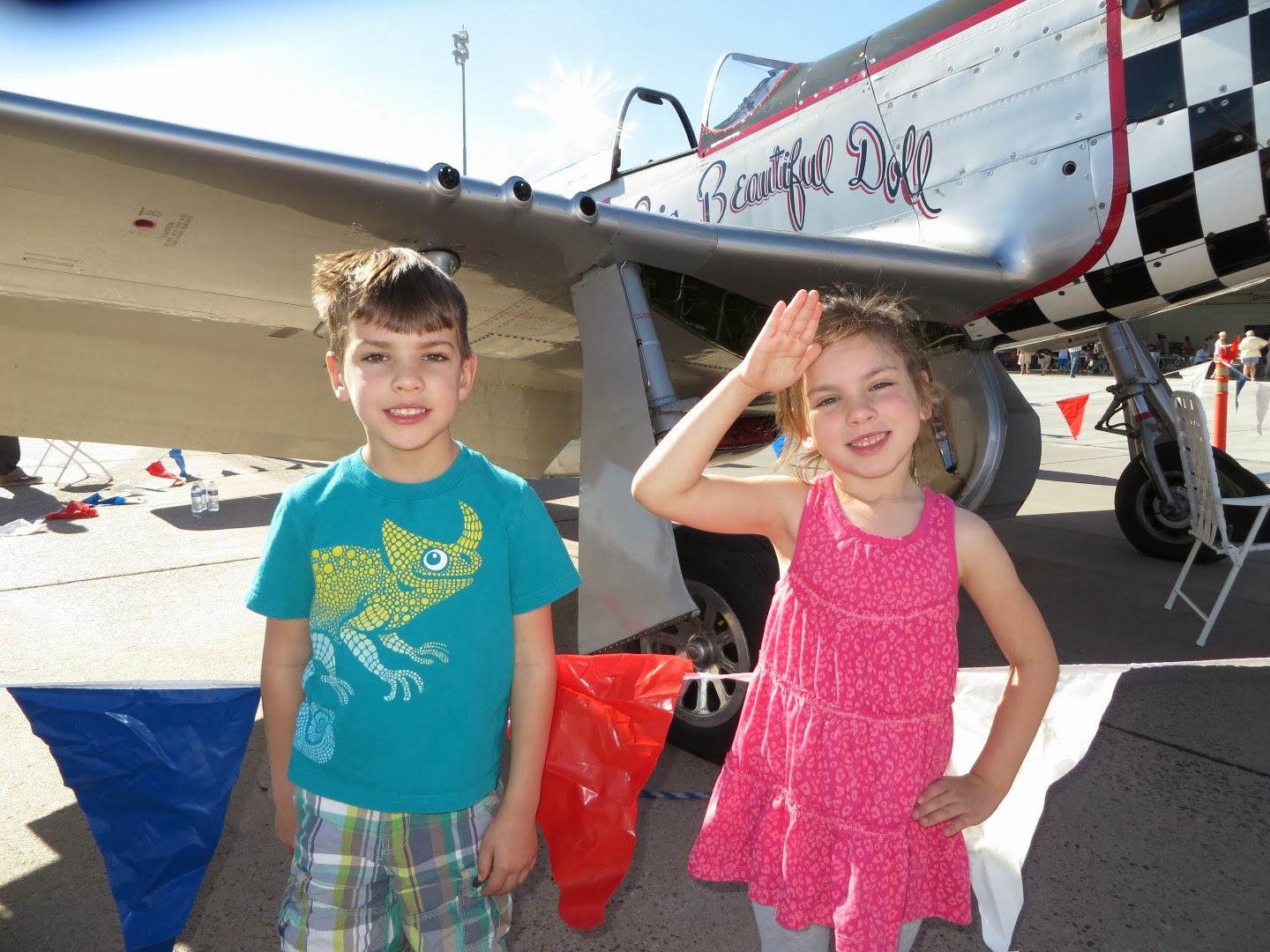 There was an odd mix of vehicles and planes out there.  An army-equipped Humvee was open to be used as a playground.  The twins climbed all through it looking at the gadgets and design. 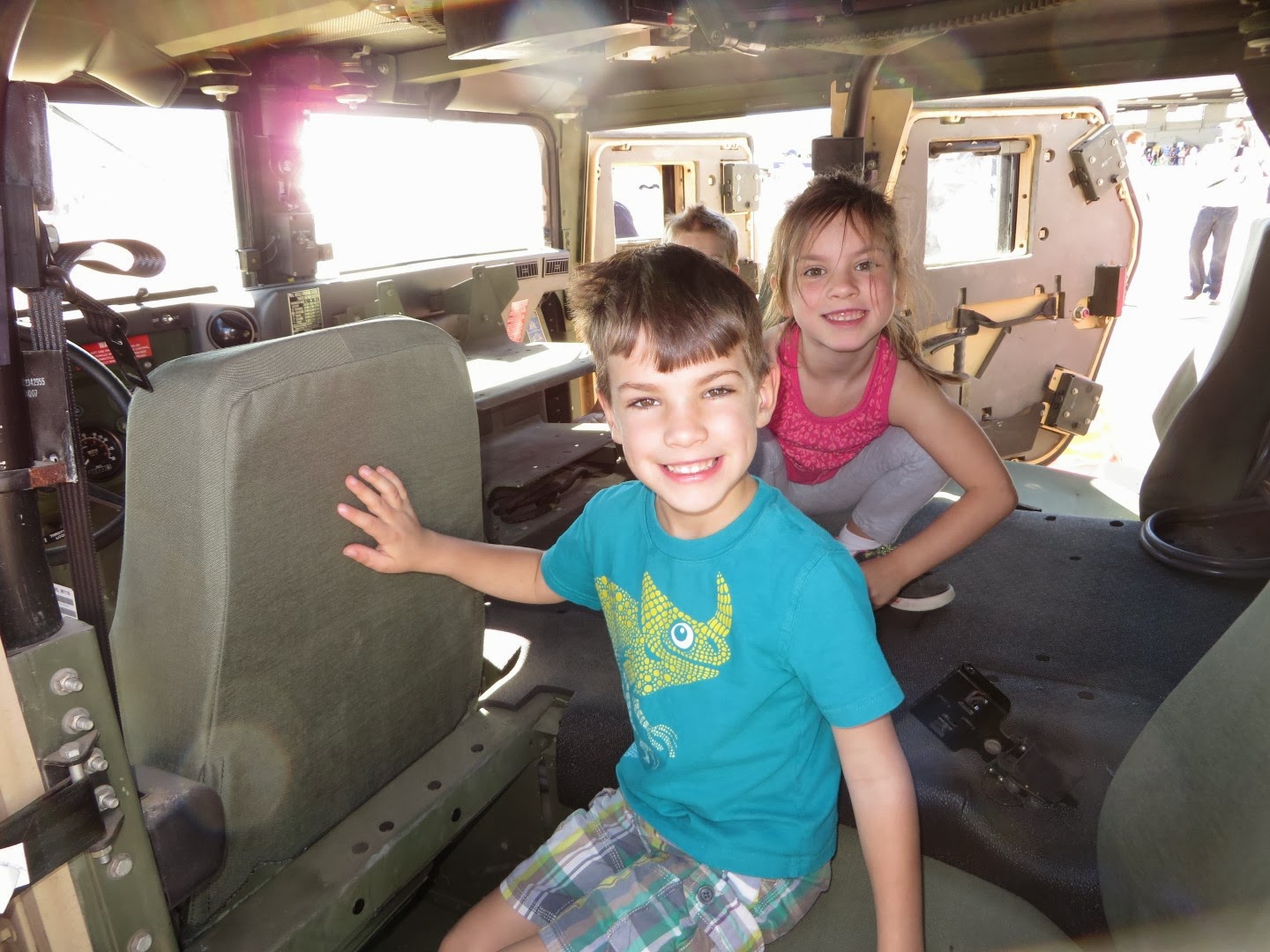 I got in on one picture with the twins to prove I was actually there.  The Sentimental Journey B-17 was one of the most interesting planes we saw.  Manufactured in 1944 makes it 70 years old.  It's incredible to think how far technology has come in only 70 years.  The twins had no way to grasp the concept of technology or 70 years, but they appreciated to cool looking plane. 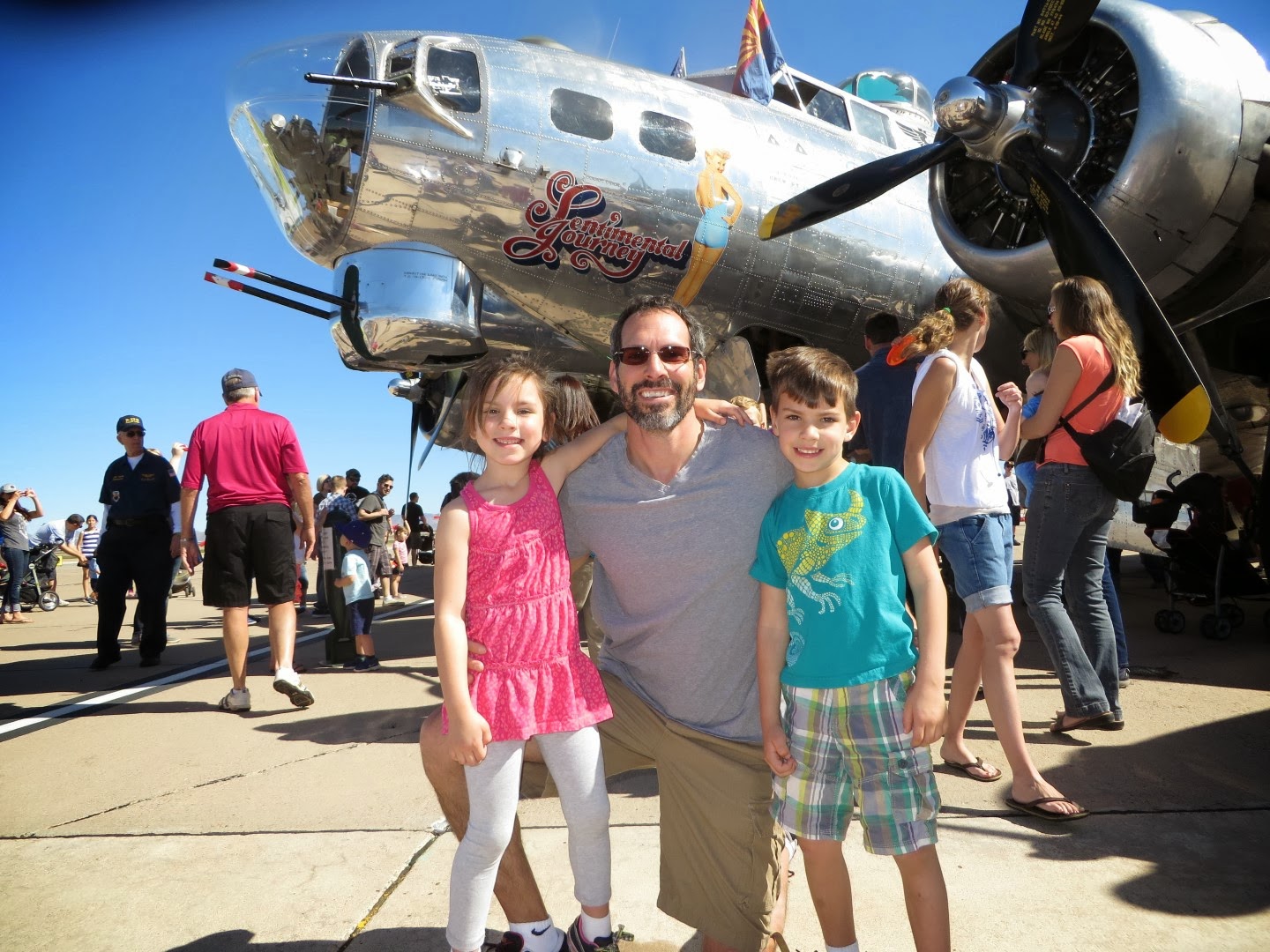 By the time we left the airport and rode the shuttle bus back to the parking lot, the twins were both hot and ready for something cool. Back at the home-front we helped with chores to prepare for their birthday party.  As we cleaned up furniture in the back yard, Easton stepped down into the chilly pool.  Both of them wanted to swim so bad, but the water is still not quite warm enough. 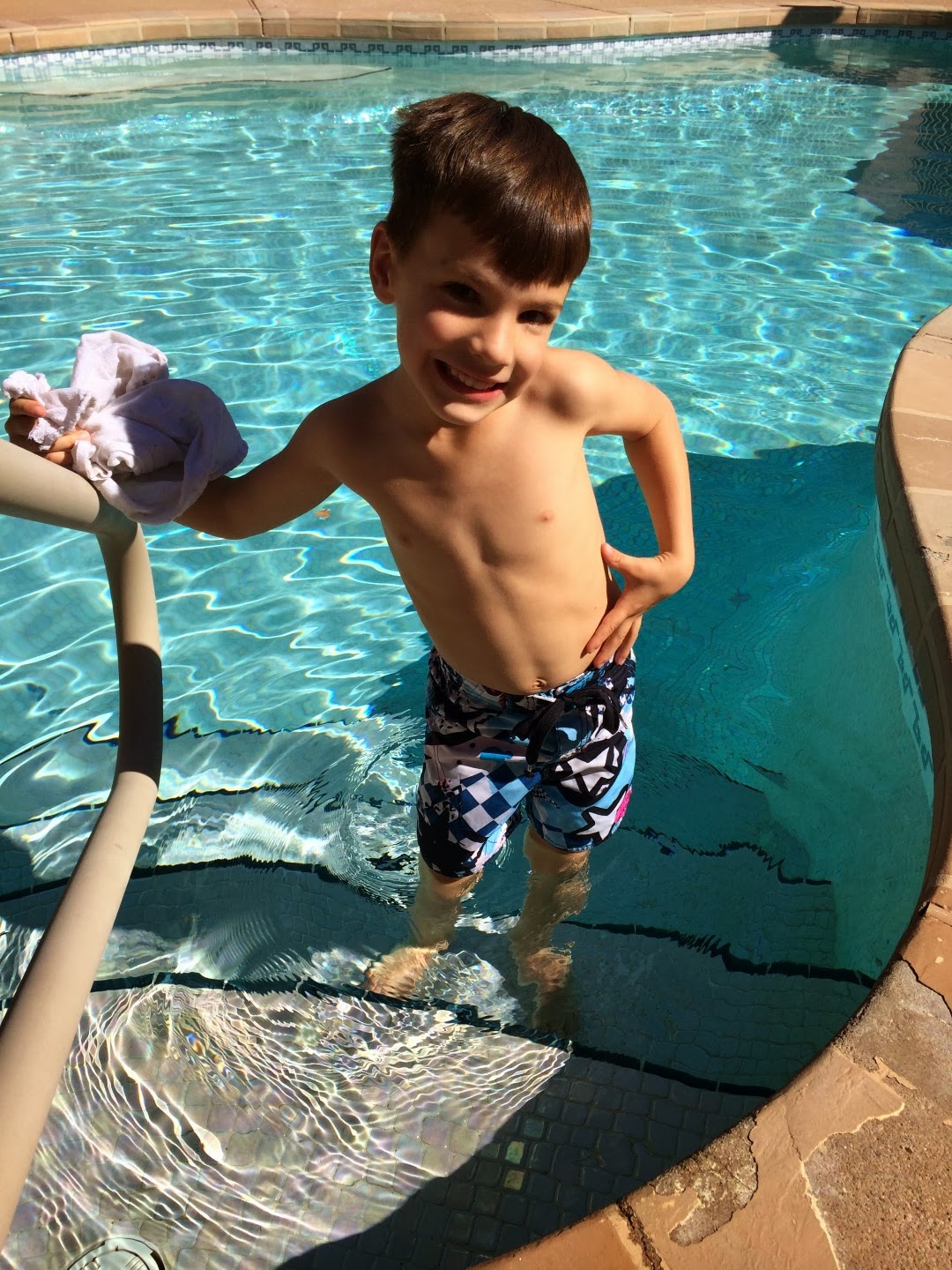 So they settled for a bucket of water on the driveway.  They played while I washed the minivan.  I'm amazed by the fun two kids can have with a garden hose. 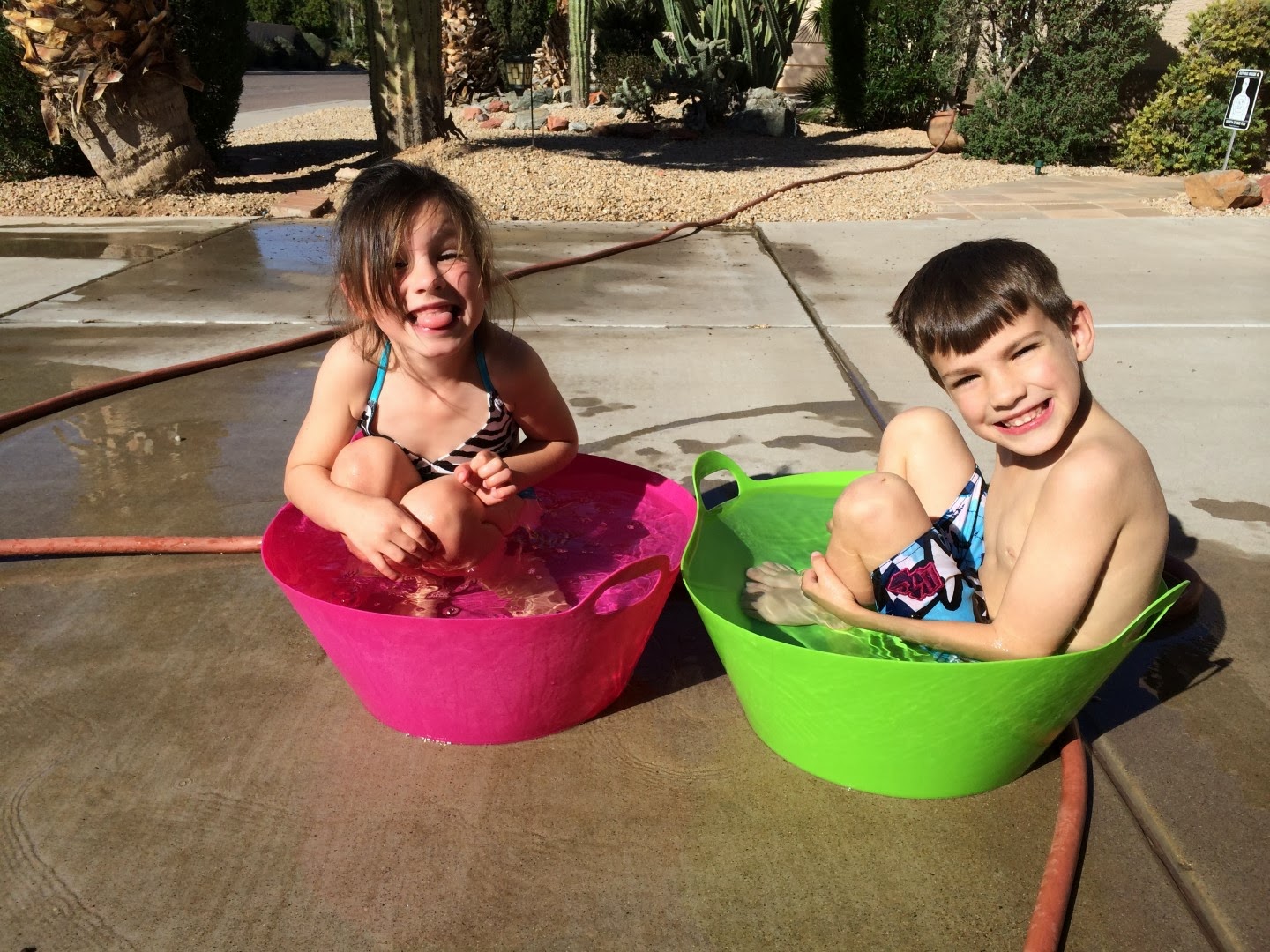 Kendra and I spent an hour or so filling up 200 water balloons.  This was a tedious effort, but because we haven't spent much time together over the past few weeks it was really enjoyable to just be next to Kendra and talk as we filled the balloons. 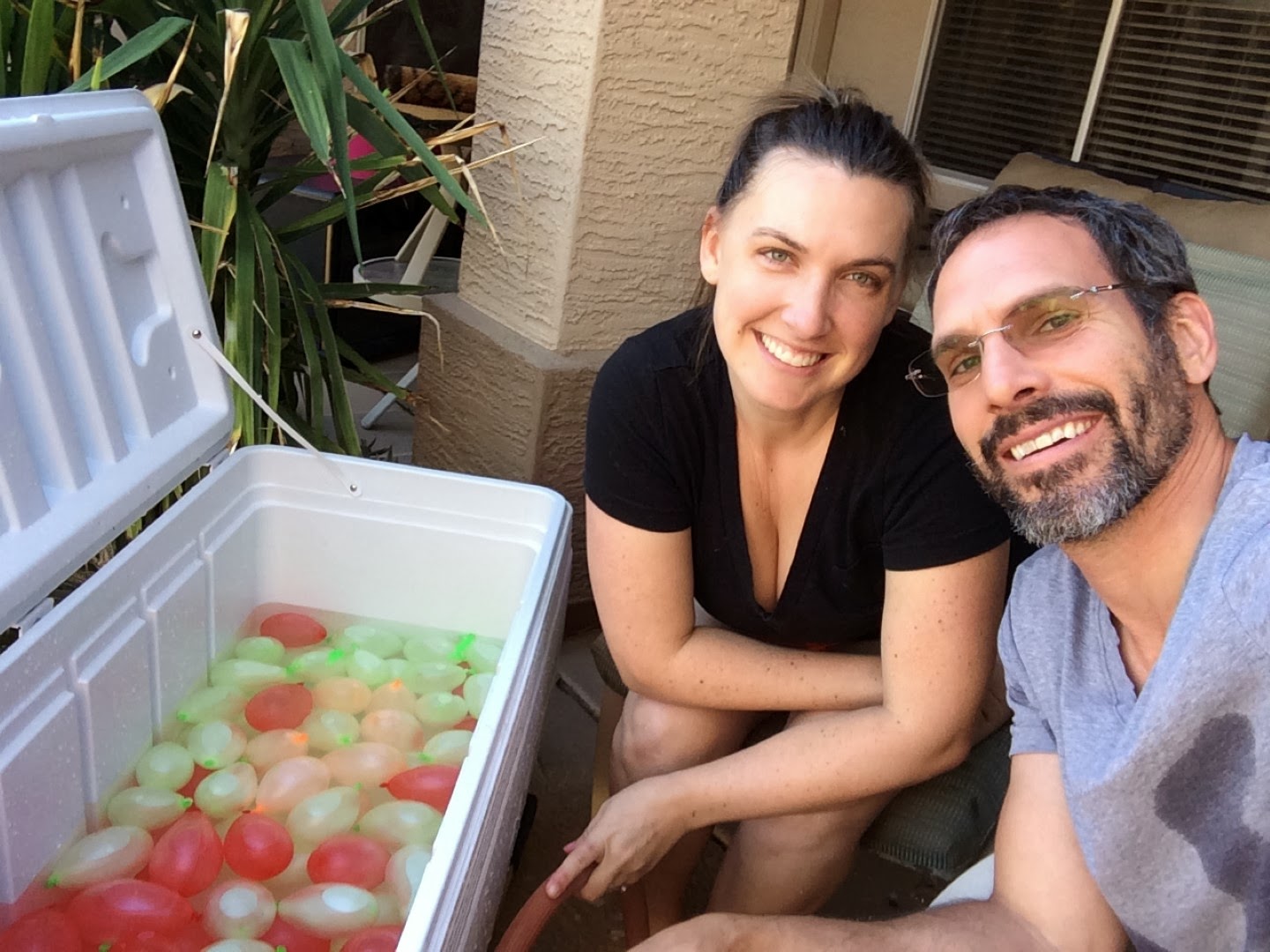 The bounce house arrived early on the morning of the party.  Within 5 minutes Easton and Layla were bouncing themselves silly.  The greenbelt provided a great place to party! 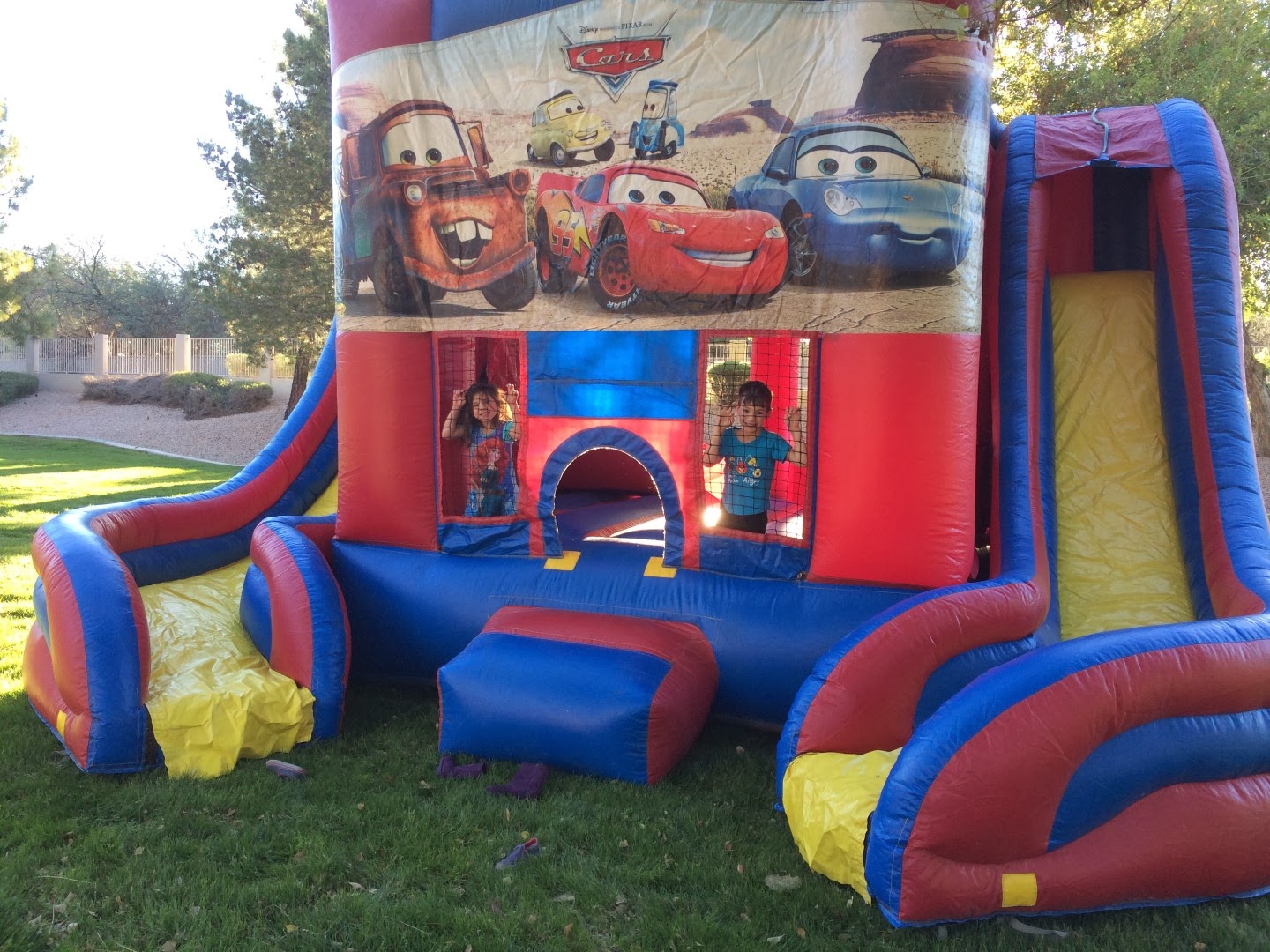 Easton and I are continuing to build the Mega Bloks Space Shuttle.  We have yet to experience a missing part, which is amazing.  Our two-set Frankenstein is coming together nicely.  According to the instruction book we are about half-way through.  He's the most patient six-year-old I've ever heard of. 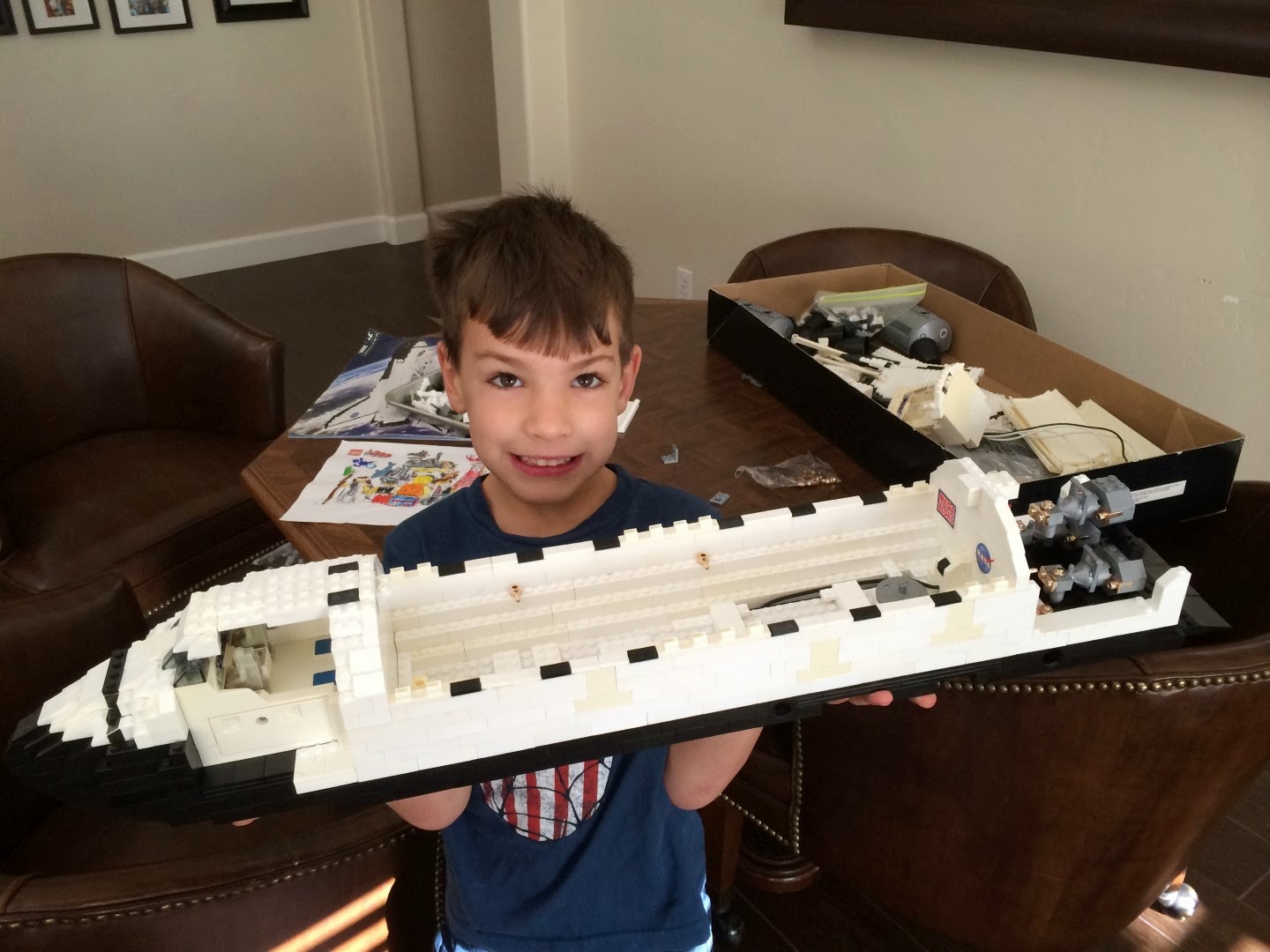 Their sixth birthday party was an overwhelming success!  Looking forward to sharing the pics and stories.