The Week of Nothing

This week was notable for what was absent more than what was present.  We had a full five days, Monday through Friday, with zero scheduled events.  It's been several years since we made it through an entire week of being in town without a single thing on our calendars beyond work and school.  It was refreshing and healthy, to say the least.  One of the evenings I laid on the couch with my head in Kendra's lap and just looked at her.  No music or TV or agenda to cover.  It was an odd, but comforting feeling.  We will do that more often, I'm sure.  I wasn't even highly productive in the evenings either.  There is much to be done, but we put the world on hold, including our friends, to just...  be.

The one biggie on our schedule this week was soccer.  Our team hasn't won a single game all season and the coach was out of town with his son, one of the players.  Then came Kendra.  She stepped in and took over as coach this game.  aaaaaand we won.   coincidence?  Not at all!  She was calling plays and positioning kindergartners by literally lifting them up and placing them in the correct position. 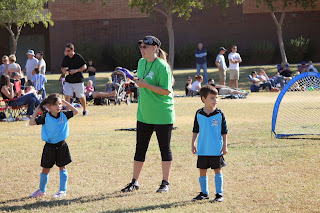 Easton and Layla each scored a goal.  I didn't have my camera handy when Easton scored his goal, but I did when Layla happened to kick it in.  How about this for a genuine joyful reaction to succeeding. 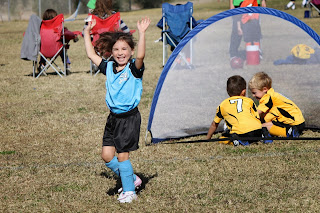 They were not sure how to even react at the end of the game as winners because we've never won.  We had to say, "we won!" several times before the players even comprehended what we said. It was a great day on the field.  Too bad we only have two more games left. 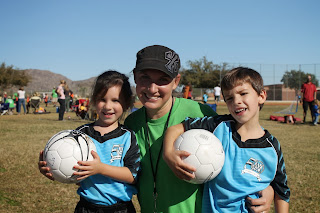 Easton already decided he doesn't want to play soccer next season.  He wants to golf.  We'll be starting "training" this coming week to get the sticks out and putt around on some local greens.  Layla already decided she does want to play on a girls team.  We are glad they played together this season, but they are free to choose what they want to do or not do after the season is over.

Kendra had her first day of work since leaving the work force before the twins were born. 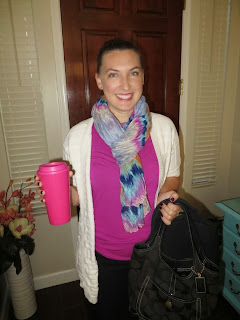 She's not working a full-time job or even a part time job.  However, the church needs some help and she has the skills to assist in the area of accounting and data entry.  It's only a couple of hours per week and won't interfere with anything she has going on for ministry or her full time role as home maker.  I'm glad to see her brushing up on Excel skills as a side-benefit.

My week for work was surprisingly light so I took off Friday morning to go for a mountain bike ride with Jeff.  He's a pastor who's church is just a few miles away from mine.  He shared some difficult situations they are working through and I was able to be a listening ear with timely words to encourage him. I didn't expect the conversations to go this way, but we're cut from the same cloth so it was easy to get to know him on a level I never had before.  It's hard to find a riding buddy for Friday morning, which is the only time i have free to ride.  It's even harder to find someone with common goals and interests.  We may do a weekly or twice-monthly ride especially since the temperature is just about perfect. 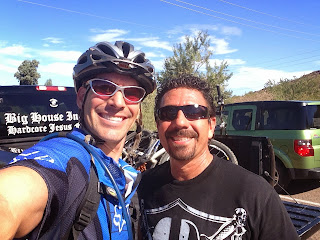 I have no idea where the image in my mind of this next picture came from, but it could have something to do with how clearly I realize Easton and Layla won't be this small forever.  There will be a day when my strength will not be sufficient to hold them both up at the same time. 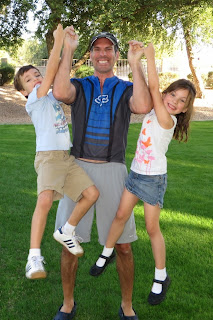 Until then I'm going to take advantage of every opportunity to be a part of their lives in whatever way is most meaningful to them.  If Easton wants to fly Lego planes around the house then I'm excited to do it with him.  If Layla wants to count to 100 by fives, then I'm excited to do it with her.  When they get older, the little things will be seen for what they really are:  the big things.