After our lessons in bad parenting by not taking the twins to the dentist during their toddler years I'm overly cautious about preventative measures.  My sister mentioned her daughter's eye care as an issue she wishes they would have found earlier.  Kendra scheduled their first annual visit to the eye doctor.  The twins had no idea what to expect, but I'm happy to report everything is well with their vision and they had fun.  I've never through of the eye doctor visits as fun, but from Kendra's description they did different tests than I normally do.

You can even see Layla's smile behind the optometrist equipment 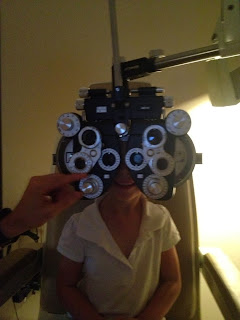 Not sure what the test is, but they wear these 3D looking glasses and tell the optometrist what they see.  Easton has a slight astigmatism, but nothing to worry about. 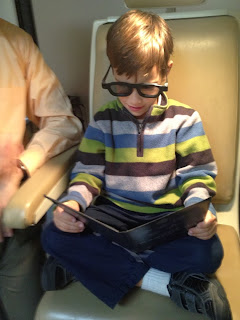 He can spot an airplane in the upper atmosphere so I know his eyes are working well. 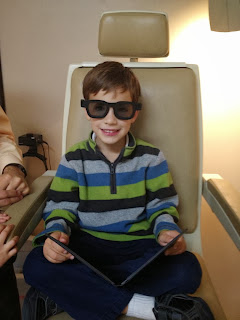 I dug through Kendra's iphone cache of photos and found several where I had no context of the story or situation.  Like this one with two parrots behind them.  The look on their face is one that says, "please let me turn around to see the birds instead of looking at the camera." 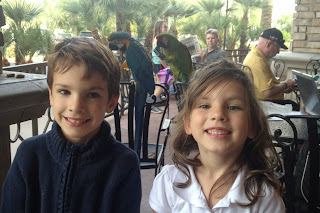 Rain isn't a big deal.  It's just rain, I know.  But in Phoenix the number of days it is rainy per year is so few that it causes people to take days off work, avoid driving on the streets, and stare out the windows. For us it is a license to get soaked and go for walks.  After school the twins changed into play clothes and wore their winter coats for a walk with the 4 Webbs.  We jumped in every puddle between our house and the main street into the neighborhood. 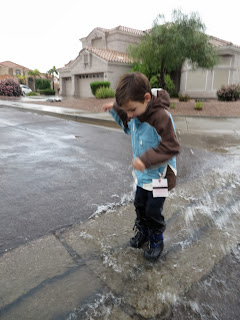 I didn't bring my DSLR because rain and electronics don't mix, but I brought my point-n-shoot to capture the moment as best I could. 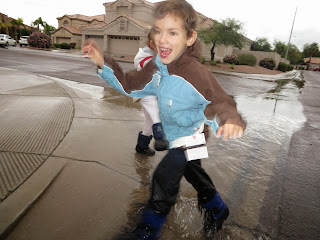 Layla had to hold her sweat pants up for the last half of the walk because they were so drenched.  Her snow boots from last year barely fit anymore, but they held water inside just fine. 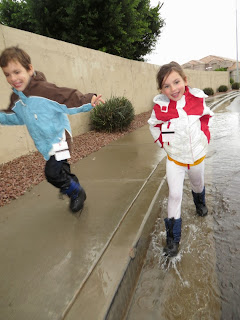 Layla's boots were a little too small.  A blister formed on her ankle so Kendra carried her by the canal. 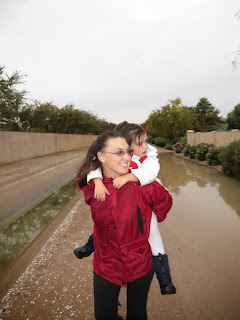 We ended up in the greenbelt, which doubles as a pond during the heavier rain each year.  Notice I didn't say rains (plural) because it's usually just an annual phenomenon.  This is one of the cutest pictures of the twins being silly I've seen in a long time. 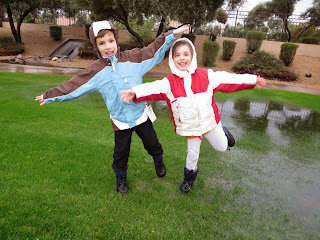 As cautious as we are as parents we want Easton and Layla to be kids and enjoy childhood.  Kendra told some parents of our plans to play in puddles to the point of being soaked.  Some of them had never even thought of the idea, which is fine.  Every parent is different, but why not let kids be kids?  We walked behind them holding hands while talking about how blessed we are that the twins are having such a great childhood.  Their laughter and free spirits were on full display as they charge down the hill into the mini-pond created by the constant rain.

Layla's blister was hurting, but not enough to keep her out of puddles.  We removed her boots and she took off through the marsh. Easton and Layla are learning to share and deal with their own personal space issues, but they are best friends who get along so well.  They may not remember these moments forever, but I know when we provide these environments to just have fun that they will look back on their first memories fondly. 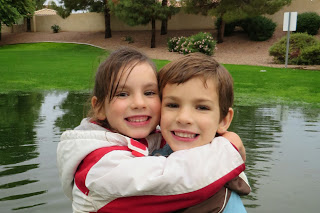 Together, we braved the Costco crowds for bulk food shopping.  Kendra came across these full body pajamas with the feet in them.  Easton's are a little too small and I doubt they'll last through the winter.  He's in a growth spurt, but keeping a one-inch lead on Layla as he has since they were born. 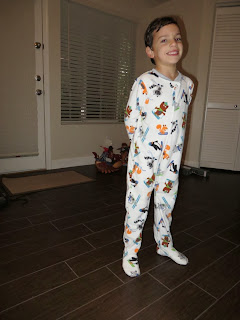 Layla's princess pajamas fit perfectly with her height and personality. 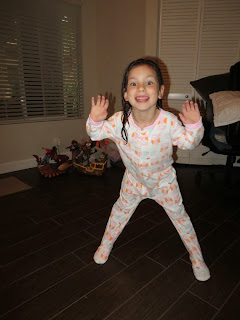 This next picture is a bit of an optical illusion because Layla is closer to the camera so she looks taller.  I told them to hold still so i could take a picture and they immediately threw an arm around each other.  I couldn't see the patterns of their pajamas well enough as they were squished together in a side-hug so I asked them to stand apart so i can see their pajamas. 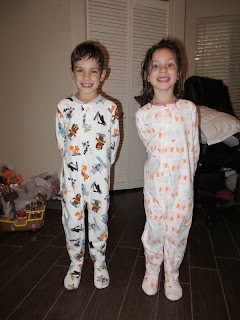 They are full of energy and full of life.  So much that it's tough sometimes to get a picture without a blur.  Parents ask where kids get their energy from, but that's a silly question.  It's obvious they suck the energy from parents!  I'm glad to have enough left in my tank to take care of what I need and want to do.  The way I recharge is through sleep and spending time with Kendra.  This week was much more balanced in our time together.  We were able to just hang out and be together for more than 2 minutes at a time.  That's a victory because the balance had shifted too far in the wrong direction over the past few months.

As for Thanksgiving, we have zero plans, which is completely fine with us.  We thought about having a few people over, but everyone else already has a place to go.  We will have 4-5 days of fun and productive time together.  I'm looking forward to the vacation days and cleaning out our garage!  finally.