Just because we don't have snow here in Phoenix, ever, doesn't mean we can have snow flakes.  I did step 1 and 2 of effective teaching.  I folded up the paper, cut out some sections and unfolded a hand-crafted snowflake for Easton and Layla. Now I know how David Copperfield feels.  Their belief of me as a superhero is further ingrained. 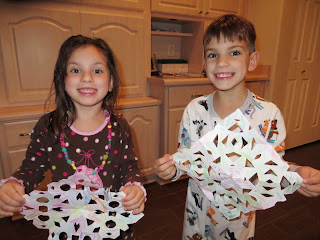 The idea behind effective teaching is:

This is my own version of the idea so maybe I should copyright it.  I'm just kidding.  I know there is nothing new under the sun. This is just a peek into my brain to understand what works for me as a parent.  Uncle Dave taught this way, but never documented or told me this is the process he used. He taught me many things, including how to teach.  When I follow those simple steps it appeases the auditory (Layla) and kinesthetic (Easton) learning styles.  If I don't explain it then they don't understand the "why" of what I'm doing.  If they don't explain it, then I know they aren't ready to do it.

Tomorrow is step 2 and 3... with kid safety scissors. 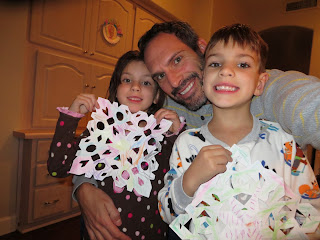 The soccer season is officially over.  We went out with a party instead of a final game because of the rain.  Our party plans were supposed to involve backyard games, the hot tub, and a soccer cake.  However, we settled for McDonald's playland and chocolate lava cake.  Easton is still recovering from his persistent cough and runny nose.  It's been 2 weeks and he's still carrying tissues in his pocket.  Doctor gave him antibiotics so we are praying he'll be back to full health soon.  His cheery demeanor is still prevalent, even in the pictures. 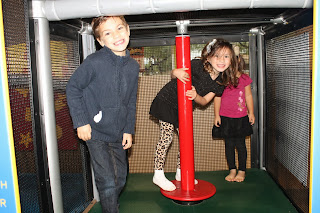 Layla is excited to wear sweaters, leggings, and everything else in the "winter" half of her closet.  Kendra curled her hair for the soccer party and the team recognized her princess royalty right away.  They were used to seeing her as one of the guys with her hair pulled back and jersey on.  This was the first time they saw her in another environment.  We are happy for Layla to be flexible and multi-faceted.  If we only give her Barbie dolls and dresses then she'll be stuck in thinking of herself only as one-dimensional.  I'm glad she's not afraid to get physical on the soccer field. 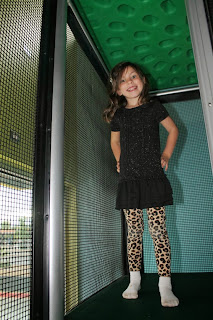 They received trophies with their picture in it.  They'll probably keep these through their senior year of high school and then toss them out as they move into college dorms somewhere.  That's just a guess based on how they occasionally pull out their trophy from participating in a girlfriend's backyard birthday party games.  It probably cost 20 cents to buy and has their name written in sharpie marker on the bottom.  If that means a lot to them, then these will be like gold to them. 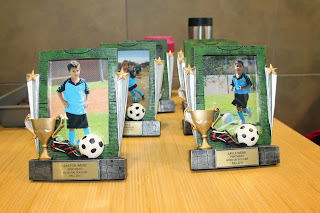 Here is the Panthers team.  Seth, Ty, Zane, Easton, Layla, and Tunoa. They won one game, which just happens to be the only game Kendra coached.  Kendra is in denial about being an awesome soccer coach, but it looks like next season she will be the coach for Layla's team.  I'm excited for Layla to get used to winning.  Easton and Layla scored three goals each, over the course of eight games.  We are proud parents! 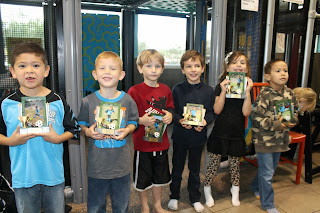 Layla can't wait for the all-girls team next season.  Easton can't wait for golf to start.  This Thanksgiving will be unlike any other in the history of our marriage.  We have no travel plans and we have no visitors coming.  It'll just be the 4 Webbs for 4 days of family fun.