I have two long lists I maintain that contain nuggets of wisdom overheard in random places.  I'll throw some of these out here just for fun.

If you are wrong and you shut up you are wise.  If you are right and you shut up you are married.
Many arguments are avoided or won by simply not giving in to the need to be right...  and whether we admit it or not, we all feel the need to be right.  Understanding this applies to other relationships too such as work, friends, and children.  marriage has taught me so much.

"If I can't share it then I don't want it.". Finding purpose in life is easy because deep down, everyone wants to bless others.
I won two tickets from work to see the Cardinals beat the Panthers.  I've never been to an NFL game and wanted to go.  However, if the rules of winning the tickets didn't state that I had to be one of the two attendees, then I would have given away both tickets as a blessing to someone.  I made a list of who would most enjoy going to this game and started calling down the list until I found someone willing and able to go.  I ended up taking Jeff, my friend from church.  He's a Niners fan and I'm not a fan of any team, but we both had a great time being a part of the ear-splitting excitement of such a large crowd. 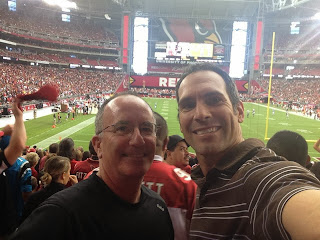 We never "drift" in the right direction.  Excellence requires intentionally focusing direction.
The choices you make determine the life you live.
Nobody drifts out of debt.  Nobody accidentally becomes a good father.  Nobody randomly gets a great relationship with their spouse.  What I experience today and tomorrow is simply a result of the choices I made yesterday.  I will thrown in the concept of grace and mercy as an addition to this concept, which can sometimes be falsely referred to as "karma".  Grace is getting what we don't deserve (gift).  Mercy is not getting what we do deserve (punishment).  Thank God he doesn't enforce karma because I get so much that I don't deserve such as love, fulfillment, forgiveness, and opportunity.  At the same time, mercy is displayed every day to me when I fail, but get a second chance at relationships, my job, and parenting.  Even though my behavior or motives or reaction deserves punishment, there is mercy given by others in my life that prove karma is a lie.

A fool is a person who knows right from wrong and they don't care.

I don't think much explanation is needed for this one.  Once a person, even a child, know right from wrong, then we are free to choose, but we are not free from the consequences of the choice, but for grace and mercy.

You'll never leave where you are until you decide where you'd rather be.
There is no whining allowed in the Webb house.  If you start a sentence with "I want" or "I don't like" then you're going to have a bad time.  We only respond to politely asking and being specific.  Passively saying, "I don't like orange juice" will not get you a glass of grape juice.  As a matter of fact, you're guaranteed not to get a glass a grape juice because we understand this next principle:

You get what you reward and you deserve what you tolerate.
If we reward whining, laziness, or bad stewardship, then guess what we will get more of?  If we reward sharing, loving, caring, effort, and results, then that's what we get from our kids and each other.
You can never be a good leader until you become a good follower.
Layla is a natural born leader.  She gives orders like a drill sergeant. to other kids of varying ages on the playground.  Easton is a natural follower.  He has no problem falling in line with authority and doing what he is told.  Even so, I force both of them to lead and follow.  If I always let Layla lead then she will not be a great leader because she would not know what it means to follow.  If I always let Easton follow then he won't take the initiative to be a leader.  Biking is the easiest example.  If one of them leads our adventure, then when we get to the furthest point I have them switch for the ride home. 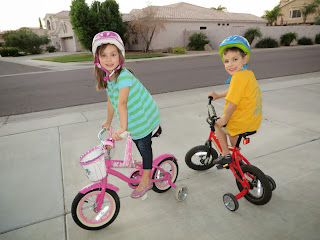 Prosperity is having enough to do what God called you to do.
I've been given the opportunity to be a husband, father, employee, friend and church leader.  I consider myself prosperous because I know God is providing and will provide what I need to carry out what He wants me to do.  As long as I am "about my Father's business" then I will have enough.  Easton and Layla have no idea how great their life is compared to the bell curve of the rest of the world.  That's not their job right now though.  I want them to appreciate the goodness of their childhood, but I not at the expense of ruining their innocence by dumping them into an unhealthy environment to prove a point.

We have enough to do what God calls us to do. 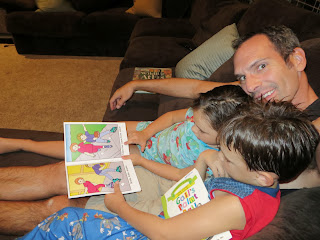 The reason we have lawyers is because we don't keep our word.
Easton and Layla can tell you what being a man or woman of your word means.  many people don't live that way today, but that is part of the problem with society.  If I say I will play with them at the park after dinner, then the only thing that would prevent from doing what I said I will do is a trip to the hospital or death.  Also, if I say I'm going to throw a toy away if they make a bad choice again, then I absolutely will throw it away if they do that again.

Most of society wants to believe there are no absolutes and everything is some shade of grey, but not me.  I am building the foundation for Easton and Layla based on trust that I am a man of my word and I expect them to be a boy and a girl of their word.  That doesn't mean "someday I expect them to".  that means today, right now, as children they are capable and expected to.  Sometimes they test me and I can see it happening.  They may do something to test whether or not I will love them all the time no matter what, which is my word to them.  Each time I prove my love is not dependent on what they do or don't do, I build their foundation a little stronger.

I realize I am a young father and not a wise, old man, but there are things I've learned through knowledge and experience that have proven these things to be true.  I'm not so smart or perfect that I can't be taught or corrected.  I'm a work-in-progress so feel free to help me see things differently where I need to adjust.

Good advice! You do a great job of weaving wisdom into parenting. Love how much you think and care about your job as a Dad. It shows in your amazing kids!
--Joanie