Thank goodness for absent fathers.  I was totally absent from my family for 48 hours and it was wonderful.  It is a good thing for fathers (and husbands) to be away from their family occasionally to relax, refill, rejuvenate, revive, and re-whatever else.  I missed Kendra and twins and Ouma too, but I surrounded myself with 45 Godly men for a weekend conference.  I didn't go to get away from them.  I went to get connected in a deeper way with guys who help me become a better husband and father.  It's the same idea of preventative maintenance on a car or piece of machinery.  My car oil doesn't get changed when the engine explodes.  It gets changed regularly so the engine doesn't explode.  This time away gives me perspective and wisdom so that when I jump back into daily life that I'm the best "me" I can be.

This is my roommate, Carl, and I hitting a buckets of golf balls to loosen up as a preparation for golf the next day.  He and I had some intensely open moments of transparency.  He told me things about himself he's never told anyone such as his past, who he is today, and what he hopes for the future.  I did the same and it's one of the most freeing things in the world to talk through the issues of life and be encouraged about my dreams and goals. 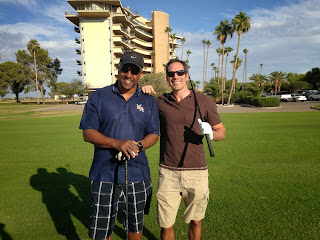 The next day I hit the course with some new guys that I didn't know very well.  The game was slower than molasses, but it gave us a chance to talk for several hours while waiting.  Certainly not my best day of golf, but sure was a ton of fun to get to know these guys better.  Such unique backgrounds and diversity across us. 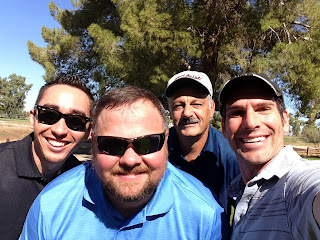 Then we went to our new church campus and did what 45 men and a bobcat can do for landscaping in 4 hours.  We transformed the area by digging trenches, planting trees, and raking ground cover.  Doesn't sound like much fun, but it really was.  Anything done together by this many guys is considered a bonding experience.  If all we did was sit around and watch TV or eat a meal, then that wouldn't cause the level of relationships that are forged when guys pull together to achieve a common goal. 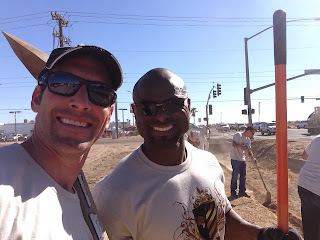 I was able to speak a few times and lead the group of guys through some interesting spiritual concepts.  This leadership role is getting real...  quickly.  This was the best $125 I've spent on myself in a long time.  I consider it an investment because what I got out of it will benefit my family and strengthen my relationships with solid men who will be a positive influence on me.

While I was having the time of my life Kendra and Ouma was helping the twins recover from the after-effects of the flu. Sounds like I missed out on lots of coughing and snot.  There wasn't even a single picture worthy event except when Betty came over to watch the twins while Kendra and Ouma went to an event.

Her daughter Kayla hung out as well, which left Easton out of the princess tea party.  He was probably glad for the alone time though.  It'll take many years for me to get used to the idea of seeing Layla in a wedding dress, but for now it's not too big of a deal.  I'll be her prince for as long as she'll let me. 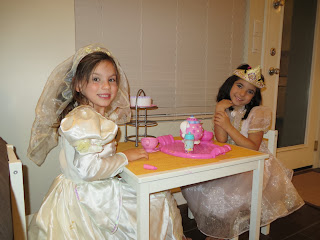 The new thing around our house is jump rope.  One end is tied to the kitchen chair and the other is manned by one of us three adults.  Layla and Easton are both very excited by the accomplishment of jumping 5 or 10 successful revolutions. 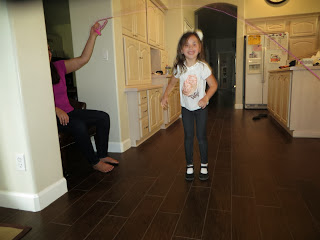 We don't celebrate Halloween with scary movies and evil components, but we do participate in the festivities.  Pumpkin carving is the first component because we want to get all the use we possibly can from the jack-o-lanterns.  Ouma helped Layla figure out what she wanted. 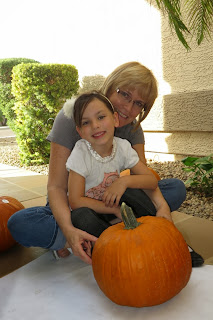 and then Ouma made her own from a little pumpkin. 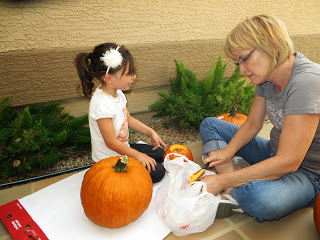 Layla settled on a princess and penciled in a rough sketch of one on the pumpkin.  The features were too small to carve out so I asked if I could pick out which princess to make for her.  I went to the computer, found a template, and printed it off within about 2 minutes.  Then I taped it on and cut it out.  I chose Ariel and here are the results. 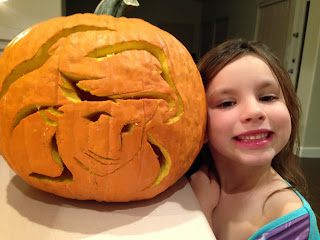 We had to threaten Easton with losing the privilege of designing his jack-o-lantern because he wouldn't pull out the pumpkin guts.  He was grossed out by the idea even after Kendra pulled out a handful of slimy fibers and seeds.  He decided it was worth the grossness to design his own so here's Easton tolerating the yucky stuff. 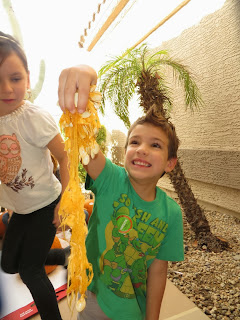 He wanted a bat because he recently learned how to draw bat wings.  As Kendra drew the mouth he requested the happy smile be replaced with a scary, sad mouth.  Not sure why he wanted it that way, but as you can see by his face he is happy with the results. 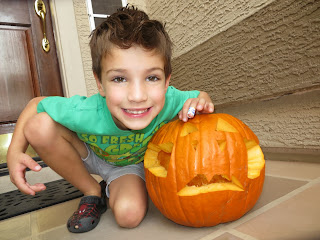 Later that afternoon Easton and Layla were in the neighborhood running around.  They ran into each other and Easton hit the pavement.  He was brave, but these kinds of injuries are sometimes the fall out from letting kids be kids.  It was an accident and both parties were equally at fault.  Easton just took the brunt of the damage because Layla has better balance. 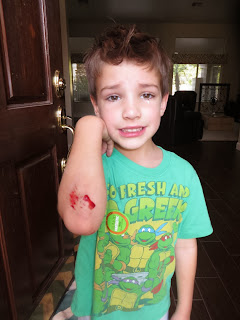 I took the twins shopping for tea lights because we had no way of lighting our creations once the sun went down.  They turned out well considering our novice artistic skills. 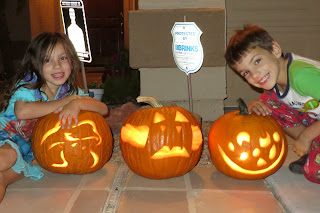 I'm still thinking about what costume to wear and the next 4 days are going to be crazy busy.  Looks like I'll probably be Buzz Lightyear again.  :)