We reached another milestone in the Webb house.  One which I've been waiting for since the twins were born.  I asked the question, "when will Kendra and I be able to sleep again?"  The answer I received is proving to be true.  The answer is:  When grandparents are in town or when they turn five years old.  They recently discovered volume control of their voices and understand when we give directives such as, "When you wake up, eat this banana bread and these crackers."

Easton and Layla are 12 days away from their 5th birthday and today was the first Saturday (with just the 4 Webbs) where Kendra and I both slept in while the twins played quietly.  It's been a long time coming, but I am thrilled to have this stage of independence arrive.  When they obey (most of the time) they get dressed all by themselves, make their bed, clean their room, and brush their teeth.  The relief we feel as parents by not having to do every little thing for them is refreshing.

Neill and Jenny were with us for a full week, which turned out to be a never-ending parade of people through our house.  Neill and I took one of the few breaks in the action-packed week to visit the Titan Missile Museum in Tucson.

This is the only in-tact Titan missile out of the 58 built during the cold war.  We walked three stories deep  into the ground on a tour of the facility. These are haz-mat suits the guys wore when working with the highly volatile rocket fuel. 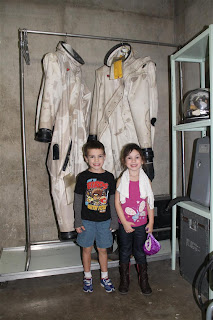 Here's the control room where the launch would have occurred if we ever fired the "Mutually Assured Destruction" retaliatory missile.  The technology was amazingly advanced for such a long time ago.  Easton and Layla had no idea what the rotary telephone was.  Such a new world we live in compared to before they were born. 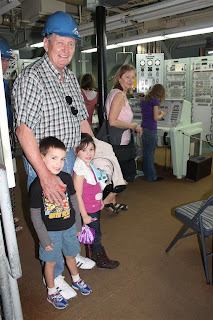 Here's the three of us standing in front of the bay window looking down into the silo where the missile hung by springs. 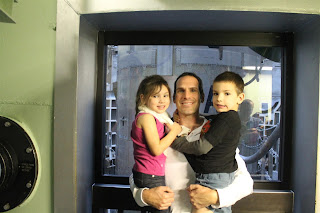 The missile is amazingly huge beyond description.  There are two stories more of depth to this monster.  Looking down into the silo brought the magnitude of the size into perspective. 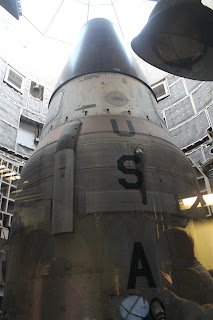 Top side there were a few rockets to look at.  I'm sure they are not intended as play ground equipment, but I couldn't resist the chance to put my rocket boy on a real rocket. 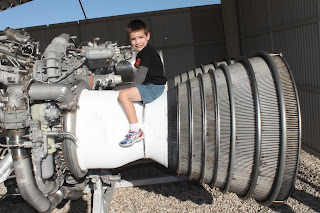 And here is one of Miss How 'Bout Me.  She enjoyed the tour more than I expected.  I'm impressed by how much they really understand.  Although it was a very tough to explain when they asked, "Why do we have missiles?" 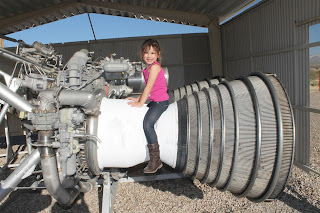 I've been searching for a space shuttle toy for over two years.  Easton has been asking for one "with the fuel tank and solid fuel rocket boosters".  I've searched every brick and mortar store and online retailer with only ONE possible candidate I found on Amazon.  The reviews were very unfavorable and shipping is costly so I've been waiting and hoping.  Well, guess what the missile museum has in the gift shop?  The exact same item.  Easton's eyes lit up and he asked me very kindly to buy it for him.  I agreed and he was ecstatic.  The quality is as bad as the reviews said.  The cargo doors were broken before it even came out of the packaging.  The wheels are cheap plastic and won't last more than 2 gentle landings on the tile.  The connectors between the fuel tank and the space shuttle are flimsy at best because it is a pressure fit between plastic parts.  Even so, Easton is getting some serious astronaut playtime. 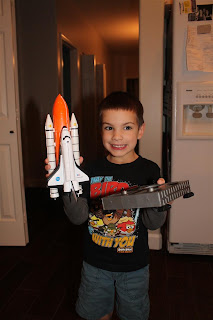 On the way home we stopped at Culver's to see if one of our Casa Grande young adult friends was working.  Turns out she wasn't there, but the twins enjoyed their Oreo mint chocolate ice cream mixer just the same. 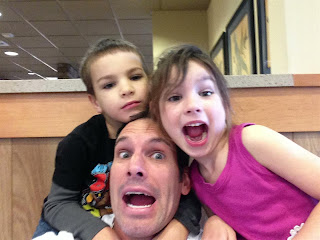 I took a few days of vacation for Neill and Jenny's visit.  The perfect weather lead to playtime at the Weeeee-bump park because there's no need in wasting entire days inside...  We have all summer to do that. 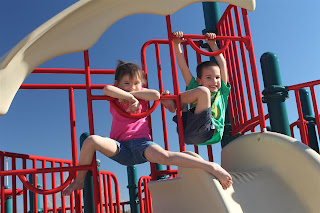 Our new friends arrived in town from Massachusetts. They are new pastors in our church who have no family in town.  perfect match for us because we're in the same boat.  Their son is very close in age to Easton.  They dove right into the Ninja Turtle roles with nothing more than a mask and weaponry. 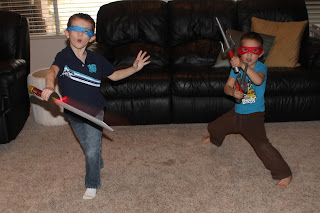 Layla doesn't choose to play pirates and war ships with Easton very often.  He took full advantage of a willing swashbuckler like Josiah. 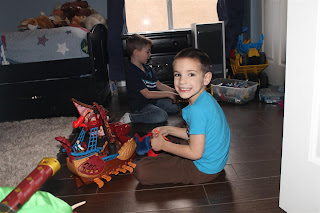 Even though Layla's new friend, Kylie, is a few years older she still sees the fun of princess dress up and tea time.  There is no escape from this playtime scenario when Layla is in charge of the agenda. 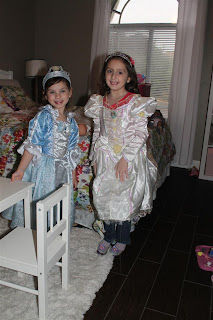