Only two days away from Neill and Jenny's arrival and week of sharing time with them.  I'm happy the extreme cold weather (for Phoenix) is gone and 72 degree daytime highs fill the 10-day forecast.  On Saturday Easton had a play date with his friend Elliot.  He's been asking for a while and we granted the request because the "friend" criteria are met.  Here is how we decide if a play date with a friend is a possibility or not:

...  maybe. If all questions above are answered with a "yes" then we will consider possibly, maybe allowing Easton or Layla to spend a few hours at their house without one of us present.  We are not paranoid.  We are extremely cautious about who we allow as influences on Easton and Layla.  I don't care if they are family or church friends or even advisory board members.  Trust must be built over time.  We won't control their friendships in Junior High School or beyond, but until then it's our decision.  I have a past and my family has a past.  There is too much at stake to allow my most precious treasures to be damaged physically or mentally or spiritually.

After I dropped Easton off at Elliot's house I drove downtown with my lovely Layla and pulled off the best Daddy date ever...  so far.  I made sure she wore the tiara as her hair band before we left.  She had no idea what we were going to do and the surprise alone was worth the (expensive) price of admission.  We arrived and she saw the advertisement sign for the Disney on Ice "Dare to Dream" performance full of princes and princesses.  She said with a sad voice, "I wish we could go to that some day."  I said, "Yes!  How about today...  right now?"  Her eyes lit up as she cheered and wriggled around in her car seat with dancing.

I wanted to get a picture before the show started, but Layla was enthralled by the set and ice.  The look on her face is less-than-happy because she just wanted to look at the ice and wait for the princesses. 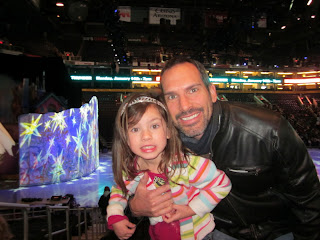 The highlight of the event was when Layla serenaded me with the Tangled theme song as Rapunzel ice-danced with Flynn Rider.  She held my arm tightly and we gazed into each other's eyes as she sang with the best vibrato voice on the planet:

She finished by saying, "You're my prince, Daddy."  I was in tears.  If ever there were a moment in my life I wish I had on video, that is the one.  Completely melted my heart and I was a wreck for the next 5 minutes trying to pull it together before the lights came on.  I told her before, "sometimes Daddy cries because I'm so happy to be with you"  so she wasn't worried about me. 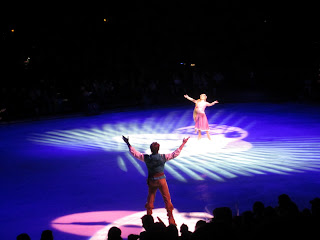 The performance was a little disappointing because Mickey and Minnie had about 60 seconds of total time on the ice.  The bulk of the time was spent on telling the movie version of The Prince and the Frog, Cinderella, and Tangled.  After the three stories were done, all of the princes and princesses came out for a 60 second dance around the ice.  Layla cheered each princess as she skated onto the ice.  The costumes were outstanding and the set was well designed. 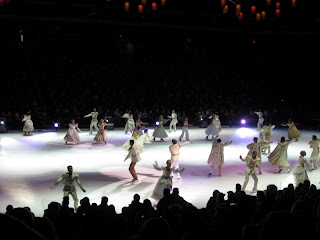 We exited promptly after the closing curtain and picked up Easton from his play date.  He had a great time playing with Elliot's toys and his new playground equipment in the back yard.  Elliot's parents said Easton is great at T-ball.  I hadn't thought of getting Easton into T-ball, but I watched him smack the ball off the T.  He his with precision and strength.  Guess he'll be making some choices coming up soon about which sports he will play.  The rest of the day was consumed with errands and housework.  We finally started to hang some pictures and interior design items on the extremely bare walls.  It's been over a year since we moved in here and it's time we start adding some personal touches to the place.

I came home from work to find Easton and Layla waiting with surprise drawings.  Layla drew herself (note the big smile and over-sized boots).  Easton drew me a spider. 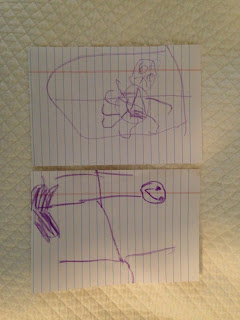 The two of them are sweet in their own creative way.  I'm glad they are able to express themselves as individuals yet still be so close.  They are self-admitted best friends and I have a video to upload where Layla describes how when she grows up that Easton will be her kid.  We have some serious explaining to do.

For snack time I gave them orange juice, two apricots and four prunes.  They arranged the plates and cups to resemble Mickey Mouse.  Think they are ready for Disneyland in four months?  Oh yeah. 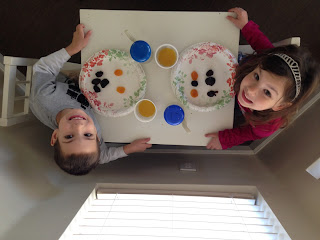