During the drive home from Sacramento we were conversing and Easton answered a question with a profound answer.  I complimented him about how smart he is.  Layla was upset because she really, really likes to win... at everything.  She should have encouraged Easton along with me, but because he came up with the correct answer before she did, she said, "Easton is smart and I'm not."  I know she doesn't believe that, but she said it because she was mad about not winning and having the answer before him.  Anyway, we attacked the lie and I reassured her she IS smart.

A few days prior to the incident I found this interesting validation of measuring twin's intelligence.  The average difference in IQ for our twins is 8.4 points because they are fraternal.  This reinforces my limited personal experience with only one set of twins.  They are very close in IQ, but very different in areas of interest and comprehension.  Typical boy and girl differences apply, but that's what makes raising boy/girl twins so much fun. 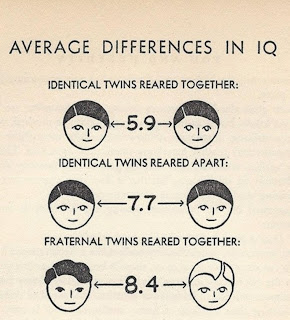 I pulled together all of the Christmas 2012 odd-ball pictures that I overlooked from the past few weeks because I had so many devices to keep track of:  iphone, canon point-n-shoot, DSLR, Flip video, and Ouma's camera.  Here are the gems from our trip:

Kendra enjoyed several kid-free outings including girls night out for dinner.  These are three of Kendra's best friends from high school. They all lead very different lives and are spread out across the country, but remain friends after many years out of school.  There is something refreshing and relaxing about spending time with friends who have known you for a long time. 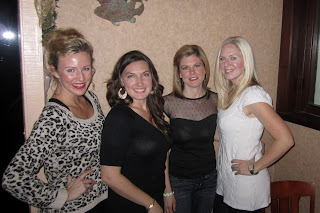 We didn't have room for Easton and Layla's bikes, but Ouma and Oupa still have their tricycles.  The sloped driveway provided great downhill adrenaline rushes and the court was safe for street riding. 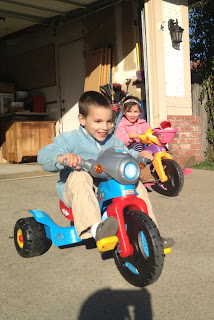 These next two pictures describe what traveling is like with the twins.  Easton sleeps anywhere in any position as long as he has a blankie or stuffed animal to cuddle with.  He stares thoughtfully out the window observing the mountains and cars and sky between naps. 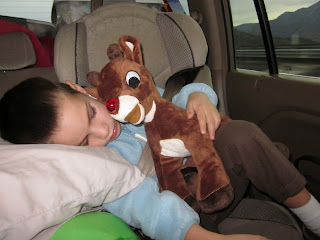 Layla never sleeps.  She just goes full speed ahead until she gets so worn out that she crashes.  She is a chatterbox with a vocabulary twice the size of Webster's dictionary.  She makes up her own words...   The never ending songs in her head come out in humming and singing during the small gaps between conversations. 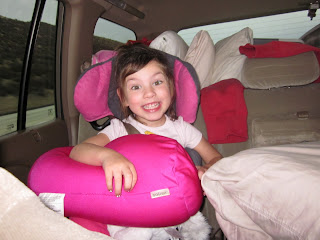 Both of them are well traveled and I'm very thankful for their happy hearts in the car.  This was the first trip with big boy and big girl undies.  no pull-ups!  We had a few side-of-the-road experiences, but no accidents.  I consider this to be a major measure of a successful trip.

Easton never wears pull-ups and Layla only wears them at night.  We are almost out of the "diaper stage"!  If someone would have told me before having the twins, "kids wear diapers until their 5 years old" then my expectations would have been properly set from the beginning.  unfortunately, I had no idea about the cost or hassle or timing of diapers and the stages of potty training.  Maybe someone else will benefit from my post and have their expectations correct from the beginning.

Layla had her own friends and fun.  Her friends are as princess-like as she is.  Not sure how she learned to pose like that, but I'm happy for her friendly personality and ability to make friends. 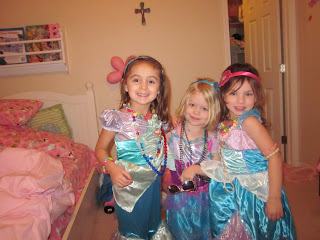 Oupa opened up the gym for us to have our 5th annual basketball and indoor playtime.  The twins finally are big enough to play by themselves on the scooters.  That was easily an hour worth of fun. 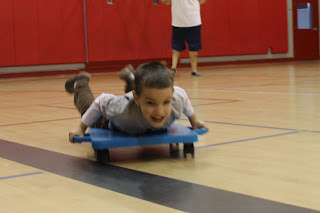 We pushed them, they pushed us, and we even rode together a few times!  and no one was injured.  The core muscle workout was perfect for their developing bodies. 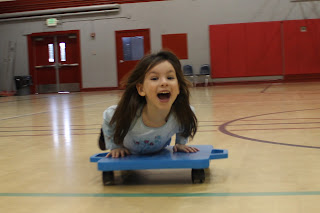 One of the highlights for Easton and Layla was Inga's house.  She is a retired Kindergarten teacher with strong German roots and a very kind heart.  She invited Kendra and the twins over for playtime and they arrived not knowing what to expect.

Inga told Kendra, Ouma, and June to rest comfortably in the living room.  Inga had appetizers and drinks all set up for the adults so they could rest and stay out of the way as she interacted with the twins. 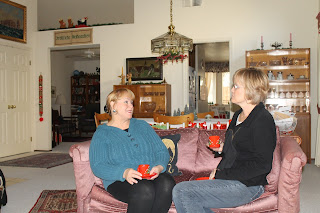 Kendra described the playtime and it's obvious Inga really knows what she's doing.  The had a blast. 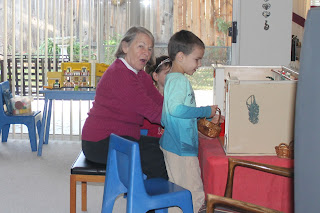 She has a separate room full of miniature, intricately designed food and kitchen supplies.  It's difficult to see the scale, but you can see Easton's hand in the lower corner of the picture. 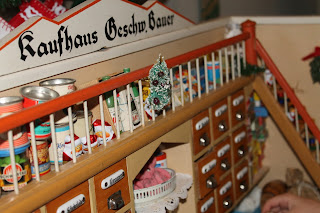 They went "shopping" in the mini store and then made some real-life treats in the miniature kitchen.  Layla's love of cooking/baking just took a cosmic leap.  Easton just wants to figure out how the scale works... 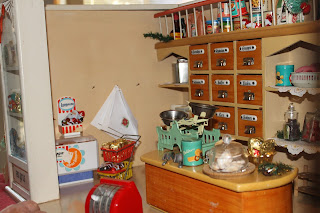 Inga's collection of child-friendly equipment and ability to work with children is impressive.  I hope her untapped talents don't get wasted in retirement. 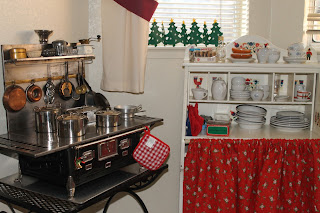 Kendra doesn't like me to go grocery shopping because I buy basket-loads of useless junk and snack foods including stuff nobody in the house likes besides me.  For example black olives, sweet white garlic, V8 juice, and pickled okra.  I convinced Layla to give the hairy, juicy okra a try and she likes it!  Easton wasn't the least bit interested, but they are both very adventurous when it comes to trying new food.  Aunt Patty gave a name to what we already implemented when the twins were just old enough to eat.  It's called the "no thank you bite".  That means the child must take at least one bite of everything served before they can say "no thank you".  They get a lesson in manners and trying new things at the same time. I'm not making light of the mass shooting in Connecticut, but I'm a firm believer in the right to bear arms.  I believe in gun safety.  I will teach Easton how to shoot guns and more importantly to respect them.  For Christmas he was given a semi-automatic, 7 battery powered Nerf gun with a high capacity magazine with glow-in-the-dark bullets.

He learned how to load the magazine, fix it when it jams, and strategies for when to take cover and when to attack with guns blazing.  This boy has great aim and accuracy! 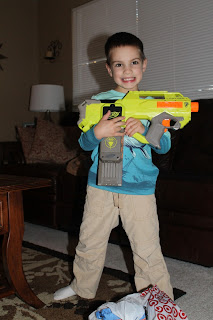 I spent 13 days in a row away from work!  My success criteria was met when I forgot what day of the week it is.  Is it Thursday or Friday?  I don't know and it doesn't matter.  That's when I know I'm truly on vacation.    This picture sums up my vacation time pretty well. 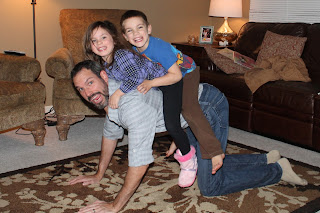 Lots of time with the twins playing inside during the rainy days.  I made the most of the sunny days as well with two golf outings in two weeks.  This time my brother Casey, Dad, and I sloshed through the soaked course together.  I scored par and beat Dad on the first hole.  My competitive goals were met and the rest of the round was icing on the cake.  The grass and trees and hills and sunshine provided a great setting to spend quality time with "the boys".  One day soon Easton will be able to join us.  He's already professed his love of golf and desire to play it. 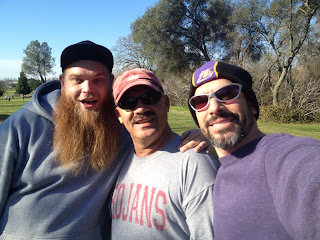 We certainly packed in the adventures this trip and made the most of our time with Kendra's extended family.  We even made some advances on the continued bridge building efforts between myself and the in-laws.  2013 is starting off well and optimism abounds.