A Gentleman and a Princess

This post is pictorially presented in its entirety from my iphone.  I have a very expensive Canon DSLR that contains photos from the past few days, but it is in the bedroom... with Kendra, who is sleeping soundly.  Since she is not feeling well I'm stuck with iphone quality.

Today was a special Saturday.  I've been wanting to give Kendra a kid-free day for a few weeks, but today it finally worked out.  She read some books, watched TV, went to the salon for a hair cut, and whatever else she wanted to do.  I wish she could have a day like this when she was healthy instead of waiting for this situation where she is a little under the weather, but nothing is perfect...

I, on the other hand, had a full Daddy day from the moment I rolled out of bed until I sung their good night songs.  We had a great day together.  I made cream of wheat and let them stir in the chocolate chips.  The three of us shared a big bowl of it together.  Most of the conversation over breakfast was me convincing them people call cream of wheat "hot cereal".  They thought I was joking!

I noticed the temperature was relatively cool and there was zero wind.  Those are perfect conditions for a model rocket launch!  We went to the near-by soccer field where we successfully launched and recovered the rocket twice.  I had to climb a chain link fence for one of the recoveries, but that's what happens when rookies like us get our hands on something capable of 950 ft altitude.  here is Layla's launch.  Notice how Easton thinks the sound is too loud so he offers to cover her ears while leaving his own exposed.  Layla gets a little bossy about it, but she is still learning how to receive Easton's considerate behavior.


Here's a picture of Layla's launch preparation in case the video doesn't load. 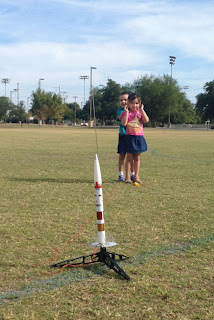 I don't have Easton's launch on film because even though we went over the instructions a few times, when Layla started the countdown she said, "5.... 4.... " and Easton said, "What does this button..."  Whoooosh!  There it goes.

We went to the lizard park for a little different scenery.  A couple passed by the playground area towing triplets. 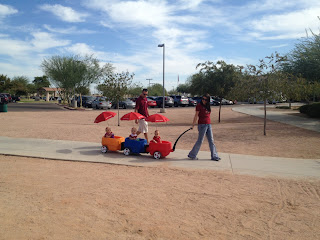 I snapped a picture and said, "it gets easier when they turn three.  hang in there!"  I was really thinking, "Thank God we decided to implant only 2 embryos instead of 3!"  We changed our mind literally 2 minutes before the doctor implanted the embryos.  Twins was incredibly difficult for the first few years.  Triplets would have driven one of us insane.

Easton has been and will be in "gentleman training" as long as he lives under my roof.  He knows to open the car door for Layla and let her in first.  Layla abuses the privilege and bullies her way past him if he forgets.  I'm still working on her to give Easton a chance to be a gentleman instead of demanding it.  He also knows to  get out first and then offer his hand to help her down out of the car. 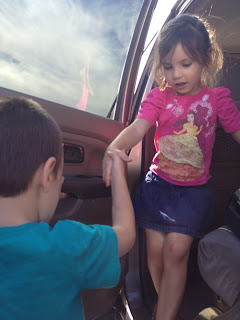 I was able to take this picture because Easton does this so regularly that I just had to jump out with my camera ready to catch him in the act.  I'm very happy he sees this as normal and expected  behavior towards women.  I'm very happy Layla expects to be treated this way.  For all women I want to scream:  "You get and deserve whatever you are willing to tolerate!"  If a woman allows a man to treat her poorly, then that's exactly what she will get.  Layla will not be one of those girls.  I want her standards and expectations to be so high that she will walk away from punks and low lifes and bad boys.

I heated up the hot tub to give the twins some swimming time and to dust off the heater since it hasn't been used in a while.  Everything worked as desired and they had a blast splashing around in the bubbles.

Two of our friends came over to get financial advice in an FPU working session.  Afterwards we walked down to the back yard for some golf lessons and croquet.  Easton and Layla had never played croquet so we made up the rules as we went just to have some fun let them swing a mallet.  Layla got smacked lightly in the hand and Easton got poked in the eye.  Even so, nobody cried and no injuries required treatment. 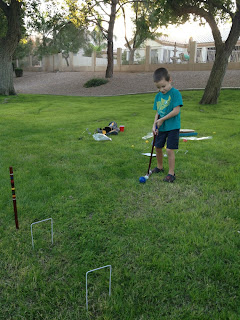 We also did some shopping around because I wanted to find some clearance Teenage Mutant Ninja Turtle costumes for them.  No such luck.  inventories must be tight because we didn't even find something as simple as a turtle mask.   Time to shop online...  They found some witches hats and wanted to put them on.  Kendra played a few minutes of the Wizard of Oz for them last week.  Their impression of the Wicked Witch of the West is this: 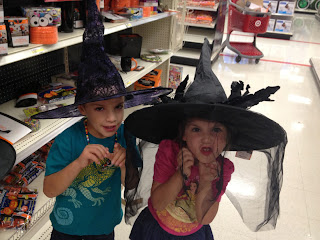 In our conversations today they asked me to explain many things.  The three words stand out as the most difficult concepts I had to field:

Seriously!  What four-year-olds require an explanation of these advanced concepts?  I explained and then they gave me an example to show me they understand.  That's so much fun...

To end our night we went to Pei Wei's for chinese food.  I have no idea where that came from, but when I asked them where they want to eat, Easton quickly shouted, "Chinese!"  While eating on the patio a police woman walked by to go into the restaurant.  Easton and Layla loudly pointed her out and said, "hi!"  Easton exclaimed, "I've never seen a police woman before."  as she smiled and walked past us.  On our way back through the restaurant they both went directly to her table where she was eating with a couple.   The twins asked her name and if she has a police car and then Layla gave her a hug good-bye.  Their understanding of law enforcement as good guys and gals who protect us and care about us is exactly the perception I want them to have.  Parents who degrade law enforcement in front of their children are doing them a disservice.  I want to make sure the pendulum is swinging on the other side of the equation for Easton and Layla so we talk kindly about police and fire and armed forces.

That's a really exciting day as far as I'm concerned.  Not much I would change about it, but I know I couldn't handle doing this every day by myself.  God bless single moms...  I'm pooped!

I like the way you are teaching Easton how to treat a girl and how to be polite. What a SUPER DAD you are! love ya gobs. MOM