My vacation officially started Wednesday morning and I'm happy to announce Thursday was a full day of absolutely nothing.  I didn't cook, clean, fix, go, or do a single thing for an entire day.  It was heavenly to say the least.  this must be what it is like to be retired?  I hear these kind of days are more frequent than once per year.

Anyway, our house is a constant flow of people, which is perfectly fine by me.  Ouma and Oupa and Aunt Judy are our current residents, with other friends and family wandering through.  For Thanksgiving day we had leftovers!  Since the ladies cooked up the huge turkey meal on Monday, nobody felt like going through the effort again on Thanksgiving day.  It turned out great though because everyone had the opportunity to rest.

Easton and Layla's excitement for the Nerf dart guns is renewed after our battle with Logan.  They also rediscovered how the darts stick to our 15 foot ceiling.  They each fired a couple of darts upward and looked at me to gauge my response.  I verbally asked the same question I always do, "why not?...  Go for it!"  Easton shrugged his shoulders and they unloaded the entire arsenal on our poor ceiling.  I captured this image of them looking tough. 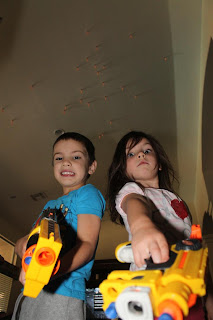 After reviewing the image on my computer I immediately thought of the Pulp Fiction poster.  See the similarity? 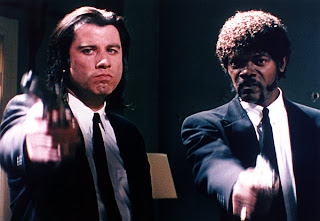 We also had cousin Megan and her boyfriend, Brandon, over for an afternoon.  We hung out with them last year for Thanksgiving and Brandon proved back then how excellent he is around kids.  The 4 Webbs are a big fan of Brandon, especially Easton because of how engaging he is with the kids.  He joined Easton for Disneyland XBOX Kinect fun.  that's about all it takes to win Easton over. 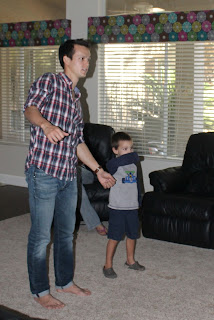 Kendra's cousin, Megan, was just a youngster when I met her 10 years ago.  Since she lived out of state Kendra didn't get to spend tons of time with her, but they've always had a good friendship and connection.  She won over Layla's affection just by being herself. 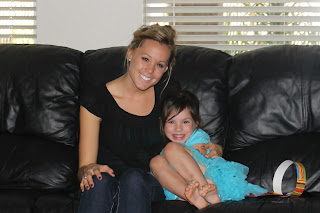 This week-long visit is Judy's first opportunity to spend days-in-a-row with us.  We've been around her for a few hours here and there when we happen to cross paths in Sacramento, but we had a really good time getting to know her better.  Any time her and Ouma are together, stereo laughter is sure to occur.  Part of the entertainment value is observing the two of them as they laugh. 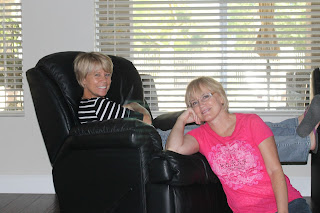 Did I mention Brandon is great with kids?  He has experience with two younger brothers and parents who obviously taught him how to be kind and tender-hearted.  He'll make a great father some day. 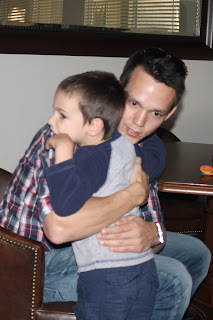 Speaking of great fathers (or not) I let Easton and Layla play next to an open fire in our backyard. 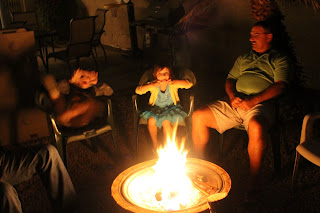 That doesn't count for bad parenting, but it doesn't lead to father of the year awards either.  Jacob came over for an evening to talk about life, love, and the pursuit of happiness.  We decided to use Matthew's fire pit and the wood from our tree demolition project.  The twins were awarded for good behavior with fire-melted S'mores.

And now for my greatest accomplishment of the year.  you might want to sit down for this big news...

I tied Oupa in a round of golf!  I feel like a sappy actor winning an Oscar award.  I would stand up there with my prize score card in hand with tears in my eyes and say, "After 11 years of playing golf with Oupa all that hard work finally paid off!  I'd like to thank Big Bertha, my golf club sponsors, and Oupa for playing the worst round of golf he's had in years."

He played an uncharacteristically bad round while I got lucky and didn't screw mine up.  I took one mulligan on hole 15, but that part wouldn't be in my Oscar acceptance speech. 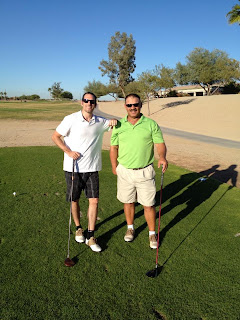 Since this round of golf, he redeemed himself by winning against several formidable opponents.  As for me, I may never play golf again just so i can end my golf career on a high note.

It's so refreshing to realize this is only one day into a 4-day vacation weekend.  I won't spend another day doing absolutely nothing, but the bar is set so low that if I accomplish anything in the next few days I'll look like a hero.