The year is quickly wrapping up and we are in full hibernation mode.  The sunrise happens later and later.  When I take Layla for figure skating practice she is very aware of the darkness and the never-ending stream of crows flying overhead. 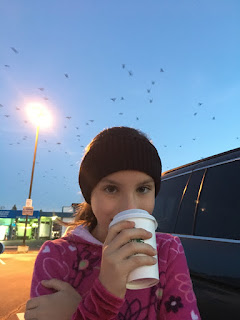 Layla and I joined a hundred other ice skating friends at the Disney on ice show as it passed through town.  This was the best one yet because it featured every princess at some point and the performances included acrobatics as well as great skating.   These last few weeks have been busier than usual for my work so I was excited to have a daddy date with just Layla and I. 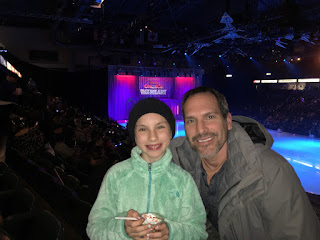 Then I joined Easton and 80 other parents and scouts for a three mile hike by Lake Washington.  This was part of the kids who stopped throwing rocks and splashing in mud puddles long enough to snap a picture.  I brought Max who was the star of the hike because all of the boys wanted to pet him and hold the leash as he muscled up and down the trails.  Easton was up in front with the leader the entire time so I didn't get a single picture of just him and I together.  no big deal though because part of the reason we have him in scouting is to learn to lead. 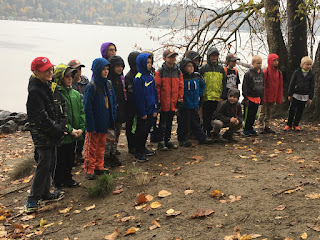 and to be responsible for things like taking out the trash.  At some point we'll change the chores up and Layla will take out the trash but for now it is solely Easton's.  We are working diligently to get the twins to take responsibilities serious and do them without being told.  just taking the next step in maturing these two fine young kids into valuable citizens. 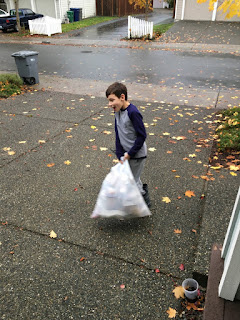 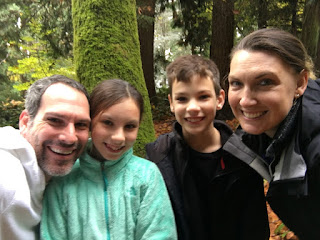 The temps are chilly, but at least it wasn't raining during this window of opportunity.  When I looked back at Kendra riding with the kids I was filled with emotions of gratitude for Kendra being alive and healthy.  I will never take this for granted no matter how many years removed we get from Kendra's close encounter with death and debilitation. 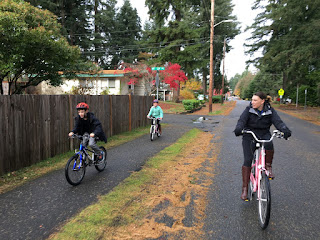 When we arrived home from our bike ride Layla saw Easton's container of dirt and worms he gather the day before for no apparent reason.  She pulled one of them out and started inspecting it.  Her curiosity and comfort with holding the slimy wiggly worm made me proud.  She's not afraid to get her hands dirty.  literally. 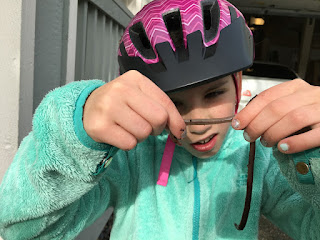 but she's still my princess too.  She has figure skating lessons three days a week in the morning.  I get to take her most of the time on my way to work.  We usually get up extra early and share enough breakfast to get her through the lessons.  These are the segments of time where we laugh and talk and work through all kinds of 4th grade situations. 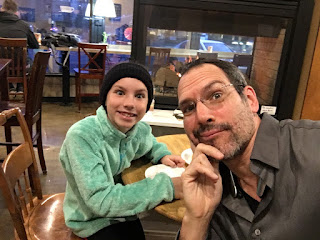 I usually watch her out on the ice for a few minutes before heading to work.  Her instructor directed her to this little girl who will be Layla's partner in the ice dancing duet performance she has for the Christmas program.  Layla jumped right in with teaching her some basics and the moves for what they will be doing.  I'm impressed with her teaching skills and so is her instructor. 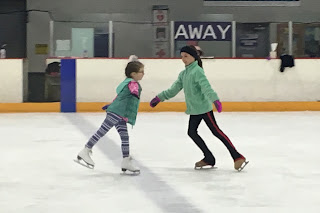 Layla's cheer season is over.  I had the pleasure of chaperoning Layla to the awards banquet.  We both dressed up semi-fancy because we wanted to.  As we were waiting to leave she sat with Max in the living room chair.  I took a picture because her black and white match his colors so well.  The look on his face is so common when Layla gets ahold of him.  She believes Max needs kisses and squeezy hugs just like she does, but we've learned from science that dogs don't like hugs at all because they get that flight or fight instinct.  Anyway, Max just tolerates the affectionate gifts from Layla like a champ. 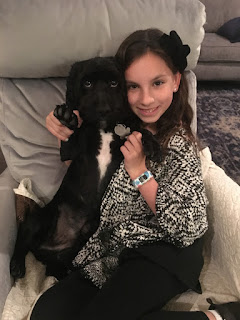 at the awards banquet Layla sat with her pals.  The three of us dads just happened to be there while wives and friends were roaming around.  I was proud of her for being such a friendly connector who helps include girls in conversations and fun. 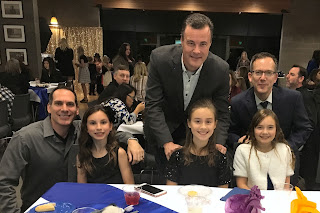 Each girl is paired up with an older buddy to help them along.  Layla's buddy won the coveted golden bow award given to the best cheer leader of the whole group.  Layla received some nice gifts, complements, and a certificate she can be proud of. 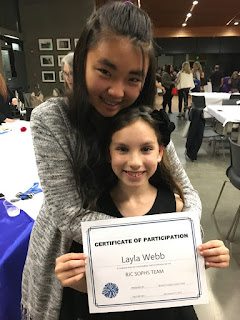 Because she isn't in competition cheer, she is still able to ride the fence of participation in cheer and figure skating both.  Not sure how much longer she can do that, but for now she is loving the social aspect of cheer as much as the talent and challenge of skating.