I succeeded yet again as temporary single dad while Kendra was in Sacramento.  She celebrated 20 years since graduating high school.  I celebrated her coming home because I hated every moment of being without her.  Yeah, the twins and I had a blast, but this I am fully convinced it is possible to miserable (without Kendra) and ecstatic (with the twins) at the same time.  I took the twins shoe shopping because Easton takes forever tying his shoe laces and Layla's shoes had holes in the mesh material.  Easton has velcro and Layla has purple running shoes. 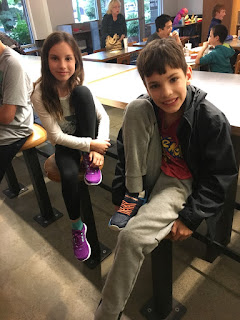 We spent a lot of the weekend in our pajamas.  I told lots of dad jokes that resulted in this picture, one of my favorites of the month because these are the most genuine smiles I've seen on their laughing faces in a long time. 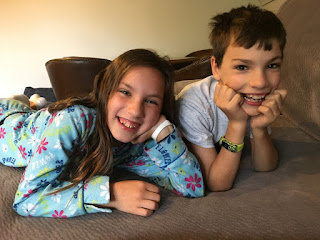 We took a walk to their elementary school.  Max exercised his stumpy legs and sniffed every bush along the way.  Once there they showed me some of the things they do during recess.  Layla ran down the hill and Max gladly followed. 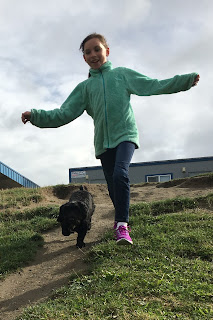 This is a weird season in Seattle.  Summer was 24x7 sun for weeks and weeks.  now we have a coin toss every morning to determine if we'll be wearing rain coats or short pants.  Last Saturday our neighbors decided to go for a hike they invited us so we joined them. The weather station said no rain until 5 pm.  however, when we arrived, it poured like Noah's flood from the time we started until 5 pm.  We were soaked, but it was such a great bonding experience.  We were in the forest running from one covering to the next while listening to the extremely loud rain. 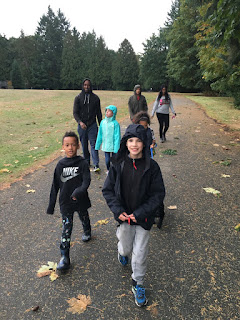 The twins were happy to have a buddy to hang out with once we arrived at the lake front.  it's hard to see, but just over their shoulders is a short beach and an amazing lake scenery. 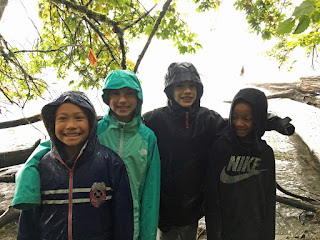 Then it was sunny the next day.  Easton and Layla felt the sun break through the clouds and shine on our kitchen table.  Layla gave a sigh of relaxation and Easton cowered like a vampire away from the light.  Their differences are so visibly wonderful. 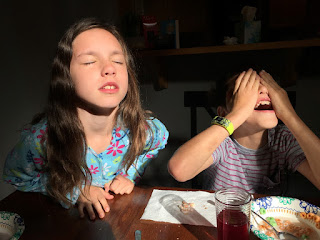 I forced them to go for a walk on another day down by the local park.  Sometimes they want to, but those are rare occasions.  Easton is working on his scouting achievements and Layla is keeping her legs limber in between cheer leading and figure skating sessions. 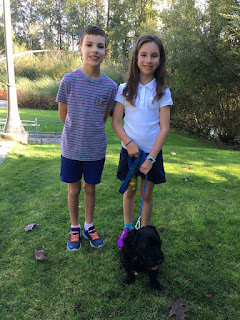 Lately, they both would rather be hanging out with friends instead of me, but I still get time with them before bed.  during my nightly routine a few nights ago Layla told me likes a boy named Brooks.  We talked openly about what it is like to have feelings for someone.  I was proud of her for opening up to me about such a sensitive subject, but I can't believe she is already at this age of liking boys. 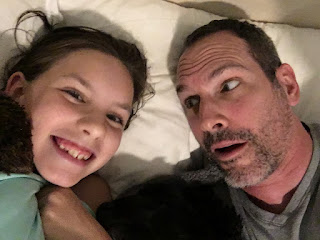 Then I realized how I kissed a girl in the third grade so they are a year late when compared to me.  It's easy to rationalize and say, "yeah, but that was me and that was then.  this is my daughter and this is now!"  Even so, there is no getting around the fact that I'm going to need to be even more aware of what's going on with boys and my sweet Layla.  At least I can say confidently that Easton still thinks girls are annoying and odd.