We are quickly wrapping up the most sunny summer in Seattle's history as we fade into fall.  This season appears to last about 2 weeks, then we will slide right into winter.  It's cool enough for us to wear our onesies around the house and even to our neighbors for football on Sunday afternoon.  We walked next door and proudly paraded into their house with food and smiles. 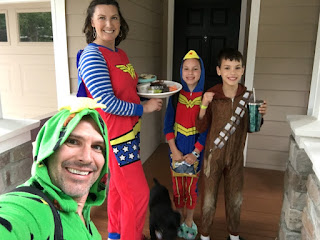 Easton spends much of his play time on wheels.  He has a bike, a scooter, and a skateboard that he is learning to ride.  I'm happy for him to get all the outdoor t-shirt activities he can handle because winter is coming. 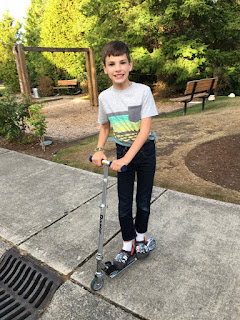 Layla's cheer leading is going really well.  She cheered for a game and then our neighbor Kain played in the next game.  I caught the brief moment of everyone passing to get a picture of them.  Kain is a year younger than our twins, but he is Easton's best friend and tells Layla he loves her.  and he means it.  I'm not convinced he really wants to play football or that he is even good at it.  Mainly because he is too kind for running over the opponents.  Even so, he fits in well at our house and while i'm happy he is Easton's friend I'm getting a little protective as a daddy over Layla. 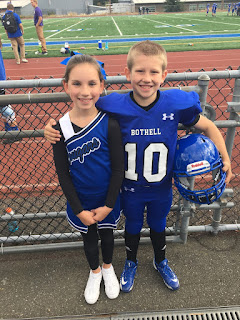 She is by far the best cheer leader on her squad.  We decided not to put Layla into the competition team because she would have to give up figure skating.  She said she doesn't want to give it up so we are keeping her in the 8 week session for cheer and then she'll be done for a while. 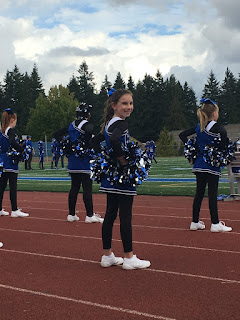 I didn't buy the pics or video of her most recent ice skating performance.  She we out on the ice and competed well, but it wasn't her best.  There are several factors that led to that, but the short version is that we were super proud of her for getting out there and giving it her best shot. 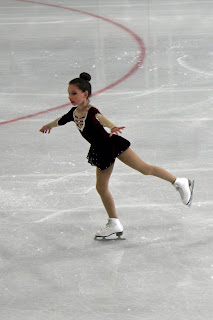 The best part of the day was the huge cheering section Layla had.  Ouma was in town and our neighbors and friends joined us to encourage her.  Layla was a little discouraged, but she went back out on the ice for lessons the next week and continues to have a passion for skating. 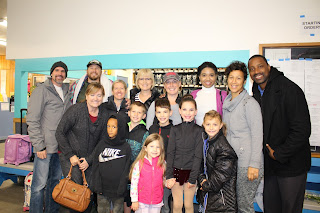 Kendra is going for long walks and physical therapy and even doing some yoga to help with her back pain.  Her latest CT scan results were negative, confirming she has no sign of cancer in her body!  It's difficult to describe the roller coaster of emotions that happen before during and after these scans.  When she told the news on the phone (since she was in Sacramento) I let out the biggest sigh of relief I've ever experienced.  Part of me wanted to cry and part of me wanted to shout and jump, but none of that surfaced as I hung up the phone.  Just one less thing occupying my mind and I'm completely fine with that.  There are so many great things happening in our lives and i'm grateful for all of it.

Bring it on, winter.  we're ready.