we have a cheerleader on our hands at the Webb house.  Layla wanted to try it out to see if she is interested.  The answer from Layla and her instructors is a resounding "yes".  Layla attended a week-long camp in Arizona and a 3-day camp a few months ago.  That was her only experience with cheerleading before jumping into the real deal.  She's been at practice every weekday for the past two weeks.  That means Kendra and I have been playing taxi.  This momentous picture is one i'll have etched into my memory forever.  Not because anything significant occurred, but because I see my lovely Layla being passionate about cheer and Kendra smiling brightly with her hair growing out long.  These simple flashes of normal life are the ones I believed so deeply for when Kendra was bed ridden. 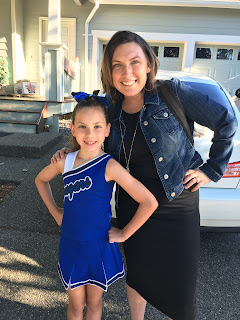 Layla is so good at cheer that she was immediately placed into the big girl's league of older cheer leaders as a "flyer", which means she is the one that gets tossed around up in the air.  God help us be trusting in you and not anxious about anything. 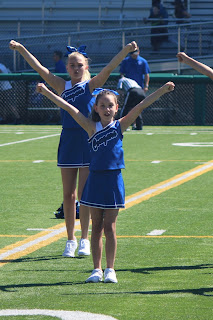 Layla's first performance was a half-time show for a scrimmage game between junior teams.  She was understandably nervous, but came out onto the field shining like the star we know she is. 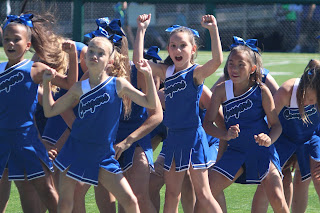 There is one dark spot in the sun-shiny summer for Layla.  Her friend from down the street is probably moving out of state soon.  Layla came home one evening acting crazy and stressed. Kendra paused our whirlwind of crazy to get to the bottom of Layla's reactions.  turns out her friend told Layla about their potential move and that made Layla sad because Makaya is her best friend.  We will miss them very much, but I am glad for Layla to develop deep friendships with other kids too. ﻿ 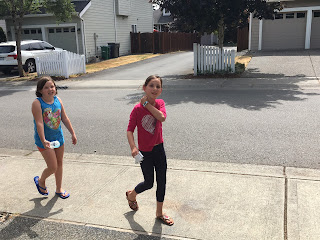 Speaking of dark spots... about that eclipse?!?!  Uncle Wayne visited a few days at our house since he is spending much of his time at their property in southern Washington.  He stayed an extra day just to share in the eclipse experience.  In Seattle we had about 95% obscuration where 100% is "totality" where it goes dark.  The darkest moments made the world around us look like dusk or sunset, but it was still a very bright, sunny day. 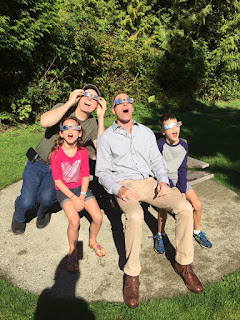 We had four pair of $3 eclipse glasses we used in hopes that our eyeballs wouldn't be burned out.  The 4 Webbs + Wayne had such a memorable time watching this once in a lifetime event. 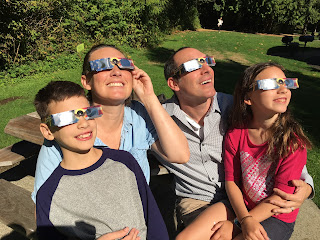 The murder of crows flocking over Bothell is legendary.  Every day more and more crows fly over at dusk, peaking sometime in the late fall when about 10,000 will fly over our house.  It's fun to just sit on the porch and watch them fly over in a never ending stream of "caw". 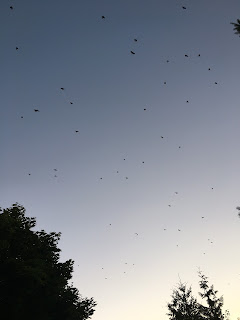 The 4 Webbs went to the police station.  Thankfully, the purpose was to get passports for the kids.  We are in full preparation mode for the Disney cruise coming up in 5 months.  It is possible to just use their birth certificates, but we wanted to be official with their passports so we can travel internationally over the next few years. 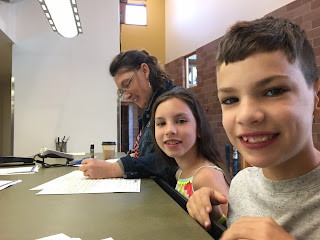 Easton moved up to be a Weblo in cub scouts.  We read through the achievements he must tackle during the next 9 months.  One of those is to change the battery in a smoke detector.  Lucky for him, one of ours started beeping during the day so I told him to change the battery and figure out what it takes to do it from start to finish.  He proudly completed the task and I gave him a high-five after he hopped off the ladder. 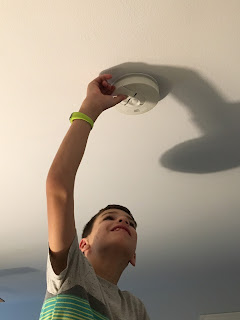 Ace is a family friend who is already in boy scouts.  He is a few years older than Easton so I take every opportunity for them to hang out together.  It's great for Easton to have that in common with a good influence.  We went for a long walk with Max through the neighborhood.  We ate an apple and handfuls of blackberries fresh of the tree and vines because everything is in season right now. Winter is fast approaching and the sun is going down earlier every day, but for now this is summer all the way through the start of school. 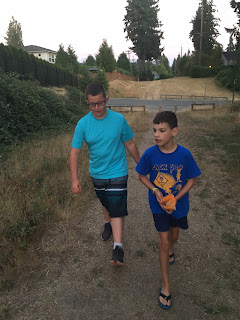