Here's a huge dump to play catch up from the last few weeks.  Summer is still going on according to the weather and calendar here in Seattle.  We set the record for the most consecutive days of sun and highest number of days above 72 degrees.  Now those are records I want to be a part of.  The only thing that doesn't feel like summer is the back to school days.

Luckily the sun is still staying light long enough for neighbors to play.  These are three neighbor boys and my employee's son who came to visit.  We sent them off to play in the neighborhood park and they created some serious Nerf gun wars.  Easton is coming around with his happy heart and really loving the friendships.  Kendra and I are so relieved to see his maturity taking leaps forward while at the same time being a boy who knows how and when to be silly. 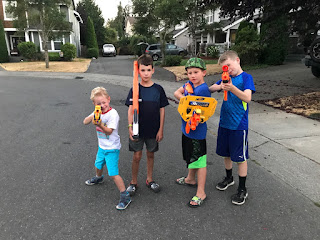 On a weekend morning I found the twins watching some tv in the den.  I brought Max with me and sat down right in between them.  Their natural instinct was to cuddle up with me closely and get a group hug.  This is one of the ways I gauge my connection with them.  If they were indifferent or push me away then I would have recognized this as a sign of "work required".  I'm glad to give and receive affection with them so freely. 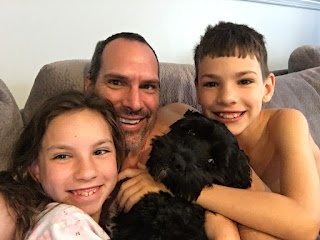 Ouma came for a week long visit and we loved every minute of her presence.  We went for a walk in the downtown park and discovered the local museum houses were open for tours.  The twins sat at old timey school desks with slate boards and chalk.  They were amazed at how primitive the equipment was back then. 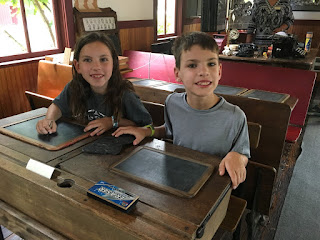 This is the only picture I have of Ouma with the twins.  That is maybe my only let down of the whole trip.  We had a few adventures, but did our best to allow Ouma to rest and Kendra to spend quality time with her.  Luckily, shipping the kids off to school each day gave several hours of kid-free, me-free time together. 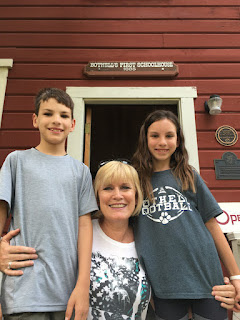 This picture was taken eight years ago. 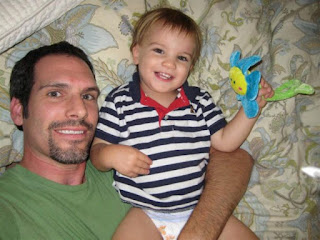 This picture was taken last week.  Easton was cool enough to do a photo recreation just for fun.  I showed him the picture above and said, "we could recreate this...  I wonder where that flower is?"  He said, "it's on my bed!"  I was shocked.  nobody knows why we've kept the stuffed flower, but there is is.  The comforter we had on our bed back then is now the one we keep on the guest bed so we crawled right up on it and captured this gem. 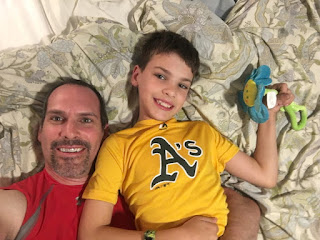 sunsets are usually uninspiring here in Seattle.  However, one evening I took Max out to run a few miles and noticed the sunset was awesomely scenic.  My crumby iPhone camera didn't do it justice, but you get an idea of it. 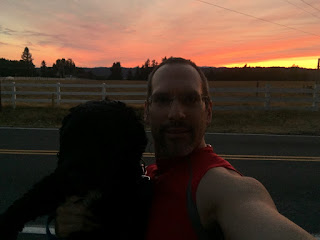 We took Ouma to Silver Lake to meet Christy and Evelyn on a sunny afternoon.  There were a few days of heat that made our house an oven so we were happy to get out and cool down.  The thing we will remember about this lake is jumping off the dock and dodging duck poo as we walked through the sand.  super busy beach, but we were content to just float around in on our rafts and tubes. 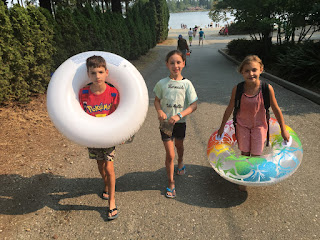 Layla has been overwhelmed with trying to juggle cheerleading and figure skating.  It was a brief few weeks of daily practice for starting cheer and frequent practice on the ice to prepare for her performance.  As you can see by her smile, she loves being on the ice and her coach brings out the best in her. 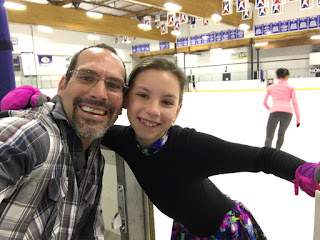 Easton and Layla are best friends... still.  Even though they bug the crap out of each other and there are still moments of annoyance, kicking and tattling, they still care for each other deeply.  Easton took time to let Layla shoot his helicopter rocket thing.   He showed her how to do it by example, then walked her through it step-by-step.  It got stuck in the tree and I came to the rescue with my long handle something from the garage.  At least I'm still feeling useful! 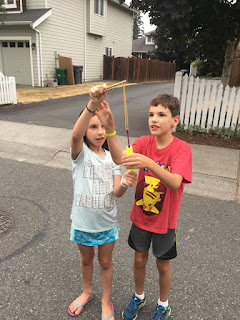 Easton created a miniature paper fortune teller.  There isn't a fortune inside, but that's what they are known for.  Anyway, he did it to prove his origami skills.  we were impressed!  He's getting to the age where he's starting to believe in himself enough to try new things and figure it out.  before recently I was the catalyst to encourage him and give him ideas and point him in the right direction, but now he doesn't even need that.  Cub scouts started again and he's happy to be a Weblo! 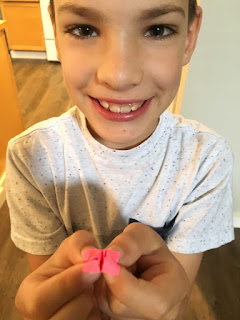 Along with cub scouts, Easton is taking an interest in skateboarding.  I have no idea who gave us a skateboard or when, but somewhere along the way he discovered it sitting in our garage.  He asked me to help him ride it so I gladly gave my attention to him.  First, I explained some basic concepts and elements of the board.  Then, I showed him by skating on the street to demonstrate.  Next, I told him what to do and pulled him slowly on the street while he held my hand.  I noticed the skateboard didn't roll very well.  It was so bad that it wouldn't even roll down hill on its own without some manual pushing. 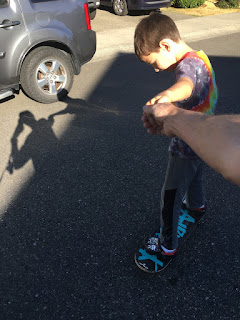 I took him to Zumies to buy some new wheels and bearings.   He hopped right on the board and has been riding every day since then.  I admire his willingness to try something new and figure it out! 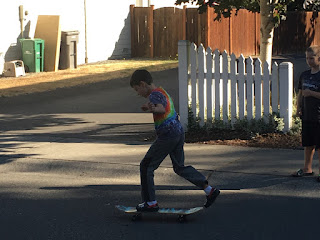 Layla did her own skating at the figure skating competition performance.  We invited our neighbors and I was pleasantly surprised by the turn out.  so many great supporters for her.  I took other pics on my big camera, but haven't uploaded them to the my computer yet so i'll save that for next blog. 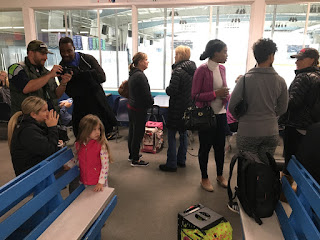 Alaysha is leaving for Los Angeles in one week.  We are sad to see her move out of our house after living with us for the past 18 months, but we are happy to send her off to pursue her dreams in the big city.  Layla requested a special Alaysha day and they had a great time laughing and shopping like sisters.  We will miss her very much! 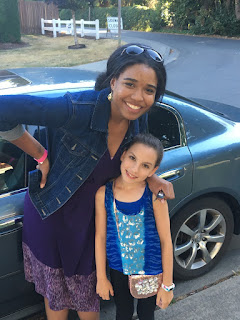 As for Kendra, she is becoming the connector of our neighborhood.  She is developing some deep relationships with several ladies within walking distance of our house.  One night she had a little get together at our house before they went out dancing.  It's a little dark, but I loved seeing this scene of Kendra and several ladies interacting with so much aliveness.  The night out was a huge success.  I'm optimistic for Kendra to build a great group of friends around her here to make up a little bit for the loss she experienced in moving from Phoenix to here. 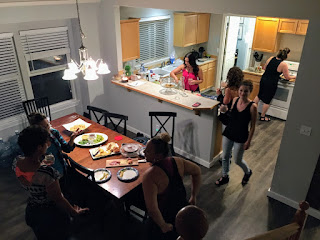