Kendra and I hit the big milestone of 15 years of marriage.  I probably should have made it a bigger celebration, but that's not how things worked out. The week before our official day, we went to a near-by island for an overnight stay.  Was great to be alone and sleep in for a change without a single peep coming from the creaky upstairs bedrooms.

So on the day of our anniversary we took a family trip up to Mukilteo.  We soaked in the sun, smelled the fresh ocean air, and had a semi-fancy dinner.  We are spending our disposable income on medical bills and finalizing the extra perks for our Disney trip in February.  We posed for this next picture and asked some stranger on the beach to take our picture.  Turned out as good as I expected. 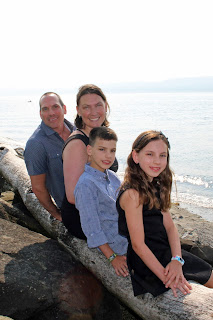 Kendra rested on a bench as the twins scampered around the boulders on the water's edge.  Easton took a break to get some cuddle time in (such a momma's boy).  The lighthouse behind them is the historic one we toured when we first arrived in Seattle a year ago. 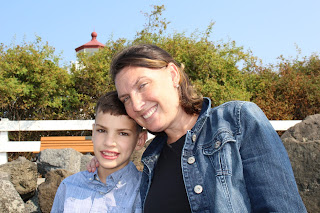 This picture blows my mind.  Not the quality of the photo, but how Easton looks like a young man.  I just stared for several seconds and blinked to see if my eyes were just not focusing right.  sure enough... he's growing up quickly. 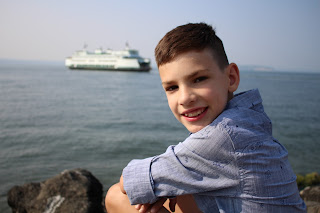 Layla has always looked much older than she is, but seeing her natural beauty in such a natural setting is confirmation that I am definitely going to be in trouble as an over protective dad when boys start swarming her.  We had a conversation tonight in the car on the way to cheer leading practice that caught me off guard.  She asked if she is going to be pretty when she gets into her teenage years.  I quickly and confidently reassured her that yes, she absolutely will be beautiful when she grows up.  I don't want her thinking that beauty is all that matters though so I continued in the same sentence telling her all of the other things about her that are true.  I said something like, "yes you will be more beautiful every year that goes by, but you'll also be stronger, smarter, funnier, friendlier, and many other ways you'll grow". 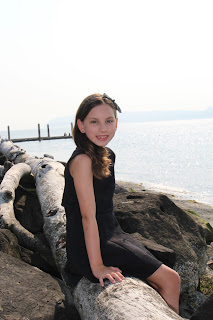 This other picture is the match to Easton's individual pic above because of the ferry.  Timing is everything! 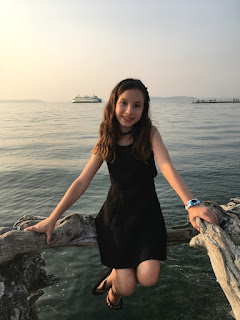 These two are never-ending barrels of joy.  Easton annoys Layla.  Layla manages Easton.  Those two things are the biggest problems we deal with every day, but they are both a work in progress.  I am still holding tightly to the wisdom so many people have given us that perseverance and consistency will pay off. 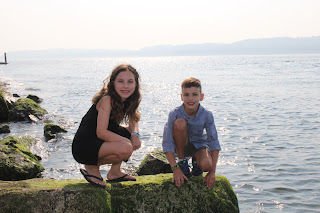 Our dinner at Arnie's seafood was the highlight of the trip with excellent views and delicious sea creatures.  There is a song called "cake by the ocean" we sing around our house.  Every time it plays I say how much I want to eat cake by the ocean.  Mission accomplished!  our anniversary dessert fulfills the long time dream of mine. 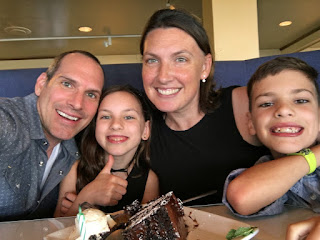 I attempted to take a few selfies with the sunset.  Our goofy looks and silly personalities were captured pretty well in this one.  I'm perfectly happy calling this our official 15 year anniversary picture because it represents us much better than the formal, cheesy smile pictures we normally take. 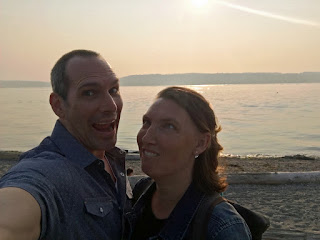 Happy anniversary to us and many more to come!  See you soon.
Posted by The Four Webbs at 9:31 PM