One on one time

My summer vacation days are well utilized and well earned.  Before I get into the adventures, I'll do a product endorsement, which I rarely include in the blog.  I bought Easton and Layla matching Garmin VivoFit Jr fitness watches.  They keep track of their steps, chart sleeping cycles with data, and (most importantly) provide an application on my phone that tracks their chores and rewards.  They get virtual coins for brushing teeth, taking out the trash, and doing laundry.  Then they cash in the coins for real things like nerf guns, movie nights, and money.  We had them over a month and they are working out very well to motivate the kids.  I couldn't be more pleased with the durability and usability. 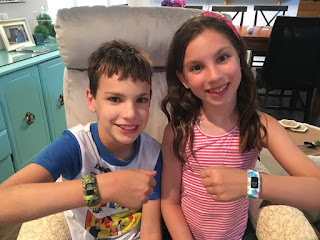 One on one with Easton:

The biggest adventure of the last few weeks was resident camp with Easton for cub scouts.  We were at Camp Edward, an hour away from our house, deep in the woods.  The scenery behind us in this next picture shows the massive fort and clubhouse area. 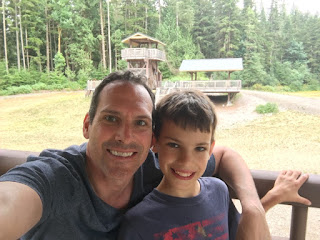 Easton and I left Kendra and Layla at home for 3 full days of one on one time.  We were actively engaged with each other from 7:00 am to 10:00 pm every day.  He walked more than 25,000 steps on one of the days.  We shot guns, bow and arrow, and learned how to tie knots and navigate using a compass.  just to mention a few. 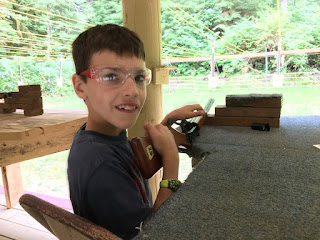 We played frisbee and dozens of games during the limited open time slots. 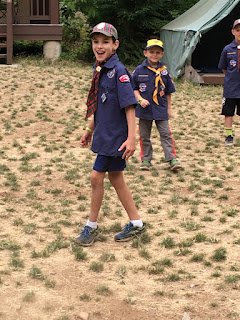 I was proud to watch him, along with all the other dads, as each boy followed instructions, respected authority, and managed himself in various scenarios.  Some did better than others.  Easton was a role model. 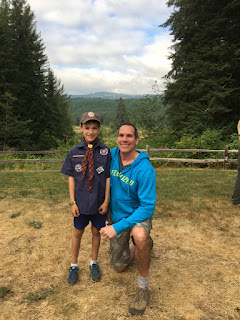 My favorite picture from the weekend is this one where he is cleaning the toilet.  Each scout had bathroom duty once during the trip.  Easton gladly jumped in with rubber gloves and tools to scrub the bathroom clean.  He wasn't supper excited about it, but he did this with a happy heart and very few grumbles. 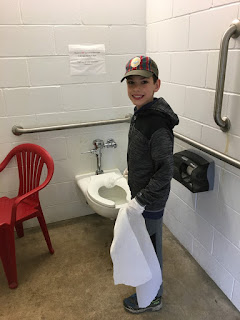 The theme this year at camp was around pirates.  One of the crafts was to make a pirate ship.  They had two rain gutters lined up and filled with water to race each other by blowing into the sails as the boats floated.  His boat floated well and made it to the other end. 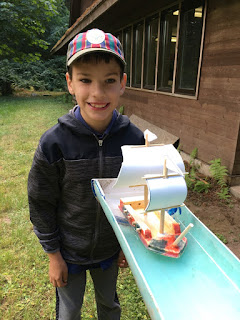 We had many silly moments where boys were boys.  He grabbed two of the free pirate patches and placed both of them over his eyes.  He kept trying to convince me that he could see just fine as we stumbled down the path. 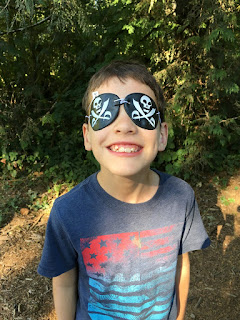 one of the things i learned about Easton is how much he likes fire, almost as much as i did at his age.  He was right in the middle of the fire building process and excited for the fire to be lit. 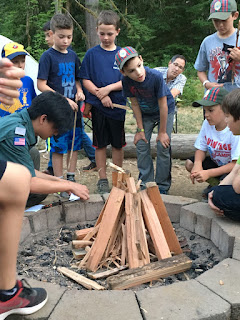 He sat around mesmerized by the flames until the smores came out.  nothing can keep a kids attention when burning marshmallows is an option. 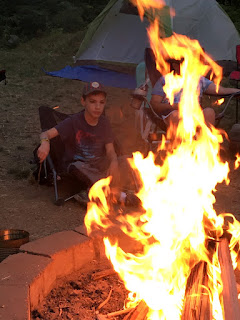 Easton was a part of a flag ceremony for the first time.  every morning and every evening we raised and lowered the American flag over our campground.  it is a very somber, meaningful event and an honor to be a part of it.  I was proud of the way he respected the flag in carrying, saluting, and respecting the flag. 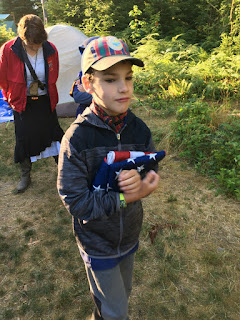 Among the memorable things about resident camp, none is more deeply ingrained in Easton's brain than the pocket knife cuts.  I bought a new $10 knife at the campground and then promptly cut my finger trying to show him what not to do.  Then an hour later I came out of the bathroom and noticed Easton jogging past me with blood dripping all down his hand.  He was genuinely freaked out, but I stayed calm.  We washed his hand off in the sink and discovered it was just a slice on the edge of his finger.  Nothing a band-aid couldn't fix!  I call this a winning picture because the lesson was learned (for both of us) without a trip to the hospital. 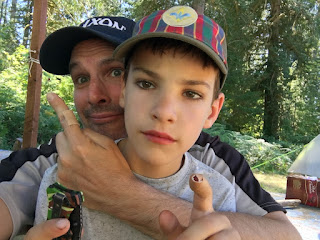 One on one with Kendra:

Our 15th wedding anniversary happened last week without much fanfare.  Since we spent so much towards our Disneyland trip and cruise coming up in February, neither of us wanted to splurge for this occasion.  Instead, we left the kids and took an overnight trip to a local island.  We watched a comedy show and stayed in the hotel.  It was a nice break from the day to day kids routine.  We haven't been spending much time alone lately, but it's just one of those short seasons that I can't wait to be over. 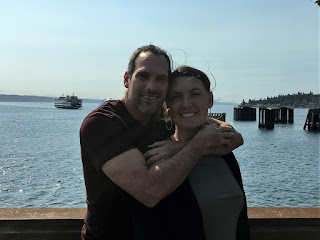 I looked back through our last few weeks of pictures to find a more official anniversary picture, but there aren't any.  I had to go back to our trip to Judy's beach to find a good quality picture.  This one does a good job of summing up our life in Seattle this summer.  We survived the record rain fall amount in the winter and reveled in the record number of consecutive days without rain all summer (55 days).  what a year it has been ! 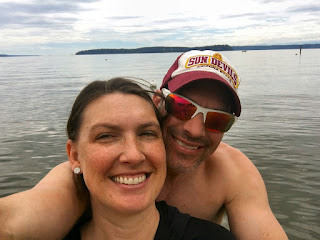 One on one with Layla:

I've been with Easton a couple of times this summer where we have multiple days/nights together.  I wanted to take a weekend trip with Layla to go stay at a castle somewhere in the Seattle area, but that didn't pan out so i did the next best thing.  We took an entire Saturday for just the two of us.  We started out by going for a tandem mountain bike ride in Duthie park.  We tackled some intermediate trails.  I was very proud of her for pedaling so strong and trusting me on the difficult parts. 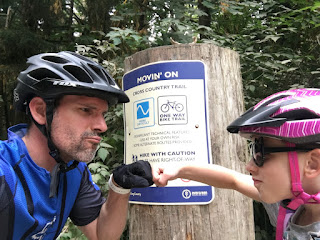 Our setup with the trail-a-bike is an attention getter because it is rare.  She gladly waves and greets those who comment and stare.  Layla has her own two-wheeled bike, but the advantage of riding tandem is that she gets to experience more intense trails. 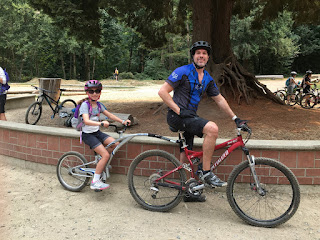 After the ride we went to downtown Seattle for a visit to the aquarium.  Her favorite part was touching the slimy sea cucumbers and star fish in the petting tanks.  We saw otters and jelly fish and a thousand other sea creatures.  She was always out front, pacing me through the exhibits, but her level of excitement was contagious. 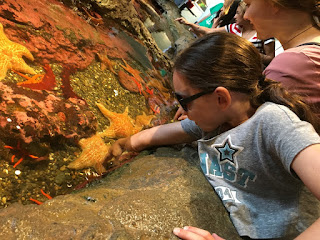 After the aquarium, we walked around the Pike Place market and ate at the Pike Brewing Company.  It's a fairly fancy place to dine so I had the correct princess daughter, but the incorrect mountain biking outfits for such a place.  We stumbled across the gum wall by accident.  It was disgusting, but interesting at the same time.   Even so, I'd put this day trip in the top 5 daddy/daughter outings ever for us.  I'm working on a plan for next summer to take a trip with just the two of us some place exciting for a few days. 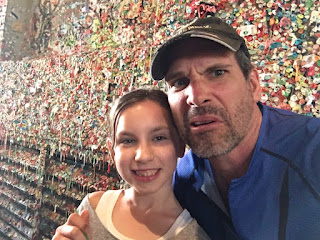 The 4 Webbs have also shared time together being locals in Seattle.  We picked fresh blackberries from the extraordinary amount of wild bushes lining every wall and pathway in the city. 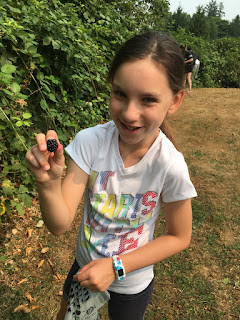 We also brought our neighbors with us to share in the picking and eating.  Kendra baked a homemade black berry cobbler and shared with our friends.  The season lasts a few weeks so we'll take another trip or two out to gather and freeze these free delights. 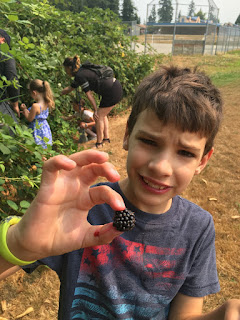