The biggest news of the year is that Kendra met with her oncologist who gave her the all clear on her cancer-free status.  Nothing new was discovered and she will move to a longer time between scans after the one coming up in early summer.  Kendra's hips and back are still causing her pain and lack of mobility, but it is manageable with some over the counter meds and lots of rest.  I am relieved and thankful.  Every day with her in my life is a gift and I will continue to see it that way for the rest of my life.

The 4 Webbs decided to take a Sunday and get out of town.  The weather was relatively nice, which means 58 degrees, no wind, and no rain.  That's what counts as opportunisitic weather lately.  We drove the battle wagon up to Anacortes where the ferry docks.  Layla asked why the town was named "Anacortes" so we did some research on the drive.  It's named after Anna Curtis, the wife of the founder of the town.  Not really relevant to the blog, but just showing an example of the conversations we have and inquisitive nature of the twins.

While waiting for the ferry we took a walk along the ocean to look for shells.  I staged this picture of the twins as they were playing around on the old dock stumps. 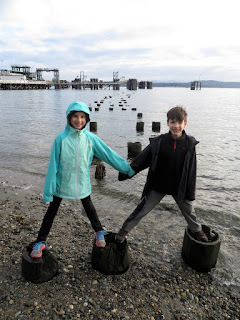 The ferry ride was uneventful and exciting at the same time.  I can't wait to take the 4 Webbs on a cruise sometime... 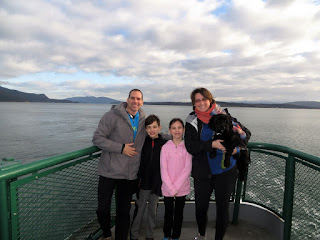 We brought Max with us because he's a family dog who likes to hike.  Layla and Kendra cuddled up with the fur ball, who is so difficult to capture in pictures. 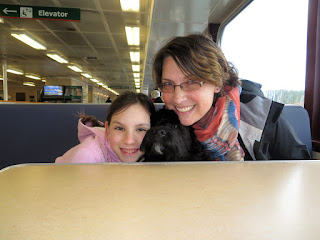 After disembarking on Orcas Island, we drove to Moran state park.  We stopped to get this picture because it's the official entrance to our day of adventure. 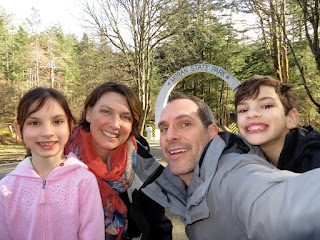 We drove as high as possible on Mount Constitution, but were blocked from reaching the peak by car because the gate to the road that leads to the top was locked.  We hoped out and hiked 1.2 miles to the top.  My favorit part was walking with Kendra, hand in hand, while the kids ran off into the woods exploring.  This is the kind of day I dreamed of during those months she was bed ridden with her fractured vertebrae.  I was believing and praying for this moment. 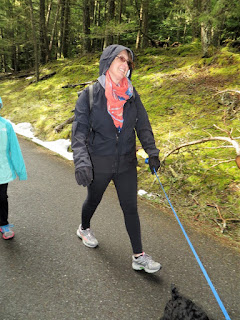 The sun poked through the clouds several times and our sun-starved reaction as a family was to stop in our tracks and face the sun with our eyes closed.  soak it in! 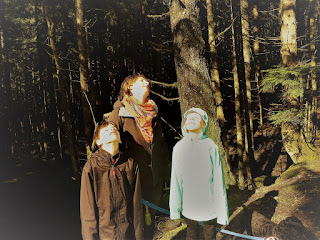 We passed by a frozen pond that was straight out of a movie seen.  I gave Layla my Canon camera and she snapped this picture. 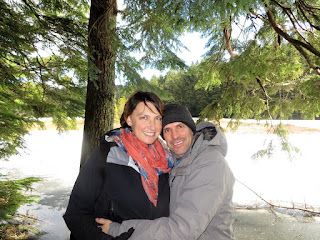 When she attempted to hand the camera back to me, she bobbled it and we watched it roll down the bank into the water.  I stuck my hand in and fished it out quickly, but it was water logged.  Layla immediately froze in a moment of panic, but I responded in a loving way by giving her a big hug and telling her that she is more important than anything, even my camera.  I haven't always responded that way, but I'm getting much better at it as the years go by.

At the top of the mountain we climbed a stone town to the top of the world, literally.  we could see the curvature of the Earth along with many islands and Canada.  The view was amazing and I'm happy we made the scenic trip up there to see it. 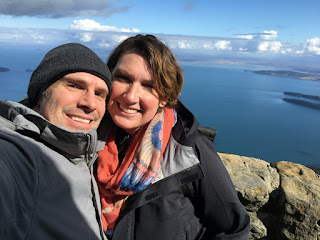 Here are the twins standing next to the stone tower we climbed.  The thing I can't get over in this picture is how tall they are getting.  Layla is catching up with Easton for the first time since the day they were born.  He's always been two inches taller, but now Layla is closing the gap quickly. 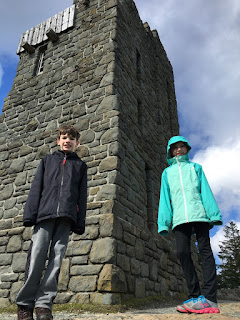 One of the few other people on the top of the mountain was willing to take a picture of us.  This panoramic pic shows a little more of what we experienced up there, but doesn't do justice for the 360 degree scene. 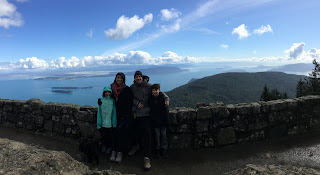 We walked back down the 1.2 mile road back to the battle wagon as we kicked chunks of snow across the asphalt like a cheese grater.  We had a bunch of laughs and enjoyed our time out in God's creation.  At the bottom of the mountain is a lake.  A fresh water lake in the middle of an island in the ocean.  We packed our lunch because picnics are fun and cheap, just like me. 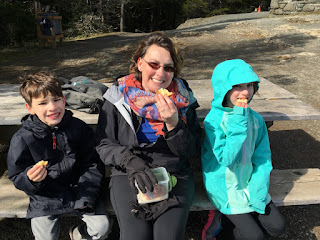 I took a selfie because I like to get in a picture now and then without it costing me a camera that falls in the water.  We scoped out the surrounding area because we might try to go camping here some time. 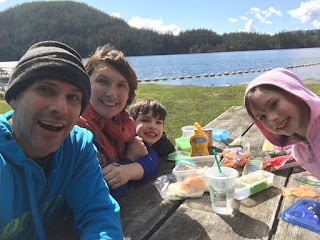 One of the interesting things we saw by the lake was a huge cross section cut of a tree.  In the middle it has pilgrims landing at Plymoth rock.  Layla is pointing to the growth ring area that says George Washington was born. That's an old, old tree... 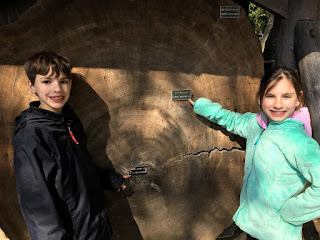 I am excited about the upcoming summer when we can get out and explore more like we did on this one-day excursion.  There is more to life than just getting all the experiences I can because that is a selfish legacy to leave.  We use these experiences to teach and connect with the twins, which is as noble of a cause as I can think of for a mom and dad. 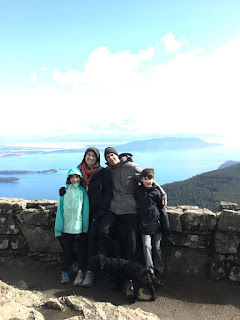