Easton and Layla are nine years old today! Kendra and I are in some state of disbelief or shock because it feels like only a few years ago they were babies in our arms.  This morning they piled into our bed asking if today was another snow day.  We said "yes" and they cheered.  They've never had a snow day because we lived in Phoenix.  Now they have two in a row because it snowed 5-6 inches across Seattle.  I'll use this as our official birthdy picture because it's a rare photo of the 4 Webbs all together. 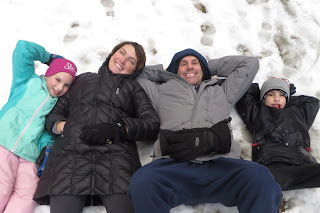 Our friend's son, Gabe, had a one night layover in Seattle as he heads off to Korea to complete his last year of service in the military.  He went with us on our family walk and was kind enough to take a pic for us.  Yesterday they played outside almost the entire day.  We had snowball fights and snow ice cream, and sledding down the neighborhood hill on a neighbor's sled.  Kendra shopped around for a sled, but there were zero in the entire city so we had to wait around to borrow one.  We are very resourceful!

Alaysha had a fun time with the kids as we did all sorts of childish things on our day off together. 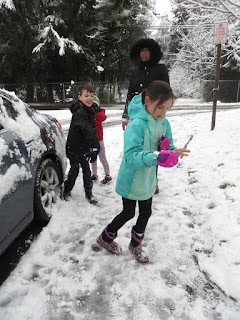 Our closest neighbor Tshinga hung around us most of the day and I convinced the kids to jump for a picture.  They spent around six hours outside playing in the snow and that's a record for the amount of time spent outside for them. 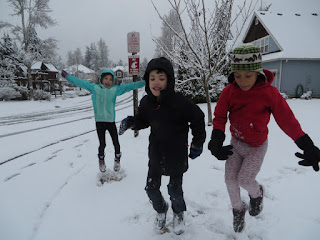 I'm looking forward to late spring when we can send them down the street for an extended period of time to play with neighbor kids.

I have a longer post in draft mode waiting for me to finish the writing, but I wanted to at least post a brief one for the birthday.  Their birthday was spent hanging out at home on their second snow day off from school!  They played XBOX kinect, painted some pottery at the local shop, and ate cake.  Easton is extremely passionate about all things Pokemon and dinosaurs.  Layla is a dabbler in style, fashion, baking, and art.  Every year their passions shift and we are gladly following along with them as they expand their horizons. 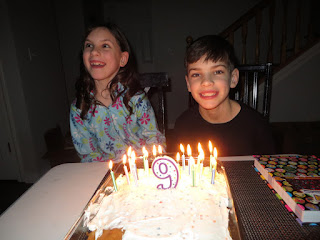 Their birthday celelbrations will be on Saturday the 11th.  Kendra will take Layla for a girl's spa day and I will take Easton for a downtown adventure to a museum and the space needle.  I'm expecting an epic birthday bash without a single friend or official party.

I can't believe we have nine year olds living in our house, but by the time i finally get comfortable with the idea, they will be ten.  I'm going to sleep now and when i wake up they'll be 18.