A few weeks ago I found a Star Wars Lego set on Craigslist that Easton has been asking about for the past year or so.  I took him to be a part of the purchase (in a van outside the circle K).  I took him because I want him to see what it looks like to do business and relate to people with integrity.  I gave the man the amount we agreed on and he gave Easton the Lego set new in the box.  He was super excited for it.  As we were driving home i told him this was not a gift, but a reward.  a gift is given out of love with no strings attached or performance needed to obtain it.  A reward is earned.  I told him he will need to memorize five Bible verses of our choosing.  He gladly agreed and promptly bugged us every day until we gave him the verses to memorize.  He has never memorized a single verse in the Bible until now, but I knew he would complete it quickly because of the Lego set hanging in the balance.  Talk about motivation!  OK, it was bribery...  but i don't care what it takes to get him to see how easy it is to commit God's Word to memory.  Here he is hitting it out of the park!


As soon as he finished he was ready to bust open the box.  This face is one of pure excitement and joy.  This is my favorite picture of Easton in the past few months.  Many children become adults long before they should have to.  I am very grateful Easton and Layla get to be kids and don't have to step into parenting or adult roles like so many less fortunate kids do. 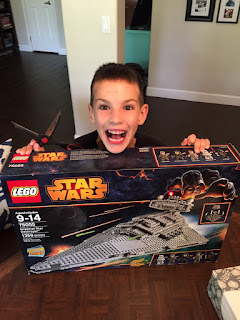 We talked daily about the Star Destroyer.  We guessed how many bags were in the box (turned out to be 16 bags) and how many instruction books.  Seeing all 1,359 pieces on the floor didn't cause him to hesitate one bit.  I thought he might get a little overwhelmed, but he didn't at all.  He is doing everything and I just get a question or two every few minutes to confirm how pieces should connect.  I help him and then back away again because he's going to build this all by himself.  The first morning after he started working on it I heard some rustling noises at 5:30am.  I walked in the living room to find Easton working away on the next steps.  I said, "You know it's summer vacation and we don't have to get up early, right?"  He said, "yes, but i just couldn't sleep any more because I am so excited about working on it!" 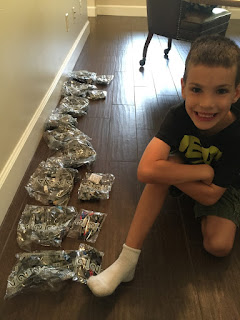 Kendra and I are not just surviving, we are thriving.  We moved out of survival mode about three weeks ago when her fractured vertebrae began healing.  The biggest challenge is no longer getting her out of bed so she can go to the bathroom.  That sucked.  every time.  She had 6 weeks of pain medication that barely helped, lots of tears, and more uncertainty than we ever thought possible.

I asked Kendra what was the worst day of this whole cancer experience so far.  She said it was the day after her hysterectomy.  Her vertebrae was newly broken, her woman parts were cut out and the 8 inch incision was freshly stitched back together.  The air trapped in her body from the surgery was incredibly painful because it had to be absorbed through her body.  That hurts.  I never thought about this aspect, but she says it was a big contributor towards the worst day ever.

Since then she's been through a jagged upward trend that included the laser radiation and beginning Chemo.  She completed her 5th round of chemo today out of 26 total planned.  Her low white blood cell count was a concern, but they checked her blood again and it was above the minimum level necessary to go another round of chemo.  We are not in denial of Kendra's current condition or the challenges ahead of us, but we are both confident in God and his healing power.  This is Godfidence! I like our shirts and we plan to get Easton and Layla the same ones to match us so that the 4 Webbs can be unified in support of Kendra and her recovery. 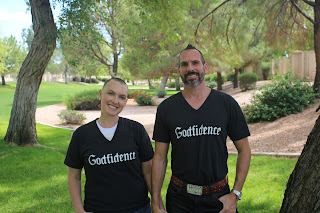 Kendra's hair is completely shaved off as of yesterday and she is as attractive as ever.  She had a big mo-hawk a few days ago, but as that started falling out by the handfuls she went ahead and shaved it.  Our friends came over to hang out with us a few days ago and she has the same haircut as Kendra had before she shaved it off.  The thing I like about this picture is the relaxed, comfortable nature of Kendra and our friends.  It's nice to have people around whose view and demeanor is similar to ours.  unfortunately Tiffany is pregnant so we won't see them at our house for several months since they will be bound at home with the new born. 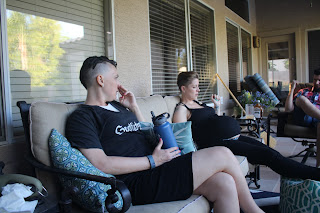