The 4 Webbs are almost back to a fully functional state with no live-in assistance.  Kendra is through 4 out of 26 weeks for her chemotherapy.  Seems like a long time when it's written that way, but i know it will go by quickly.  Her hair is all but gone so she decided to shave it off.  She looks just as beautiful as she did with a full head of hair or a mohawk. 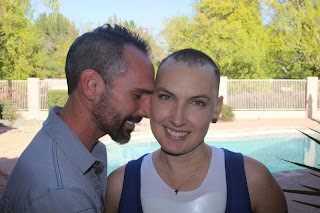 I took this picture of us because I wanted a picture to attach to our marriage life group.  Hosting a life group probably seems like a really bizarre thing to do, but we don't operate in the normal way people do things.  Most everyone I know who went through chemo had a tendency to isolate themselves and go into hiding.  Maybe it was because their symptoms were so painful or extreme that they didn't feel like talking to or being around anyone.  I can understand that, but for Kendra doing so well that she is enjoying a fulfilling daily life of lunch with friends, shopping, and shuttling the kids back and forth to school.

A man at church approached me and asked if I would consider hosting  a life group for marriage.  My other friend is on the verge of divorce.  Those two conversations sparked something inside me so I pitched the idea to Kendra.  She said she is willing to go along with this if I'll build the curriculum and set it all up.  Yes I will!  so starting June 8th we'll have a six-week class.  I have no idea who will show up or how many.  might be just Kendra and I and one or two couples.  Doesn't really matter to me though because we are just getting started on this journey.  I feel strongly that Kendra and I will be given opportunities to help people build strong marriages.  This is a deeper level of passion even beyond individual transformation.  So much fun doing this together.

I took the twins to an Arizona Rattler's arena football game.  My work gave me free tickets ($40 each is crazy expensive!)  Easton was very observant, but Layla was the one asking all the questions about football rules and the point system.  The game is much faster paced than an NFL game and they play loud rock n' roll music through most of the game.  We were out late, but the slight grumpiness the next day was worth the experience.  I wanted to leave in the 3rd quarter, but the twins were having so much fun they asked to stay longer!  that was a good sign that they were having a great time spectating. 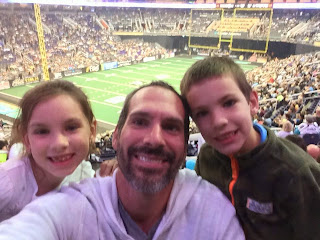 Easton and Layla have one more day of 1st grade on Friday.  The idea that I have two second graders living in my house is spooky.  I've had to say that out loud a few times for it to really sink in...  "My kids are in second grade..."  sounds so weird, but i'm really happy for the way they've grown and proud of their school achievements.

Time for us to enjoy a long weekend since I have Monday off work and the twins are all done with school!  Summer is almost officially here.