The 4 Webbs are gearing up for the biggest Super Bowl party we've ever attended or hosted.  We're expecting around 35 friends to flood the Casa de Webb.  We have three TVs, 20 seats in the backyard, plenty of space, and a house built for parties.  We shall see how it goes.

I let Layla dress herself one morning and this is what our stylish princess decided. 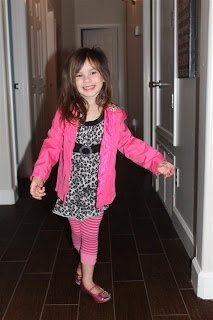 The day was rainy and overcast so her rain jacket was the perfect appropriate match.  She looked alright to me, so I congratulated her and headed out the door with Easton to a birthday party.  The invitation was for a day at the park with train and carousel rides, but because of the rain we ended up at Peter Piper Pizza.  Otherwise known as "the germiest place on the planet outside of the African continent".  I'm not a germaphobe, but I could barely stand touching the handles of the rides or the watch the twins crawling around in the play structures.  I didn't prevent them from doing or touching anything, but my spidey senses were tingling the whole time we were there.

Their favorite ride was the simulated roller coaster.  The seats rocked back and forth and vibrated to coincide with the scenery.  They screamed often and laughed whenever they weren't screaming. 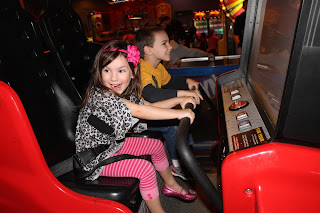 Layla wanted to ride the carousel even though it was only a lame three person ride.  Her smile says, "I'm still having fun no matter how big the ride is!" 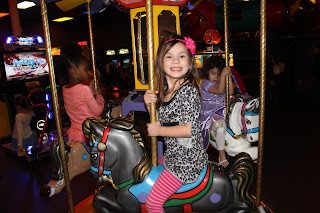 They climbed around the germ-infested play structure.  I'm surprised they didn't come back with a lost-n-found dirty diaper.  Neither of them got sick from the outing so all my concern was for naught.  We all three had a great time there and since we had to leave early I kept several coins for a return visit some day in the next few weeks. 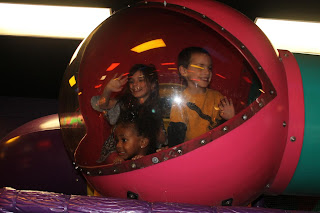 And the highlight of the party is always the same.  It's all about the cake or cupcakes.  The twins enjoy watching the kid open their gift, but cake still tops their memory banks.  The princess cake was nicely decorated, but five-year-olds couldn't care less about the design.  The only people impressed by the decorations were the parents.  The birthday girl's parents were kind enough to send me home with a big piece, which I devoured. 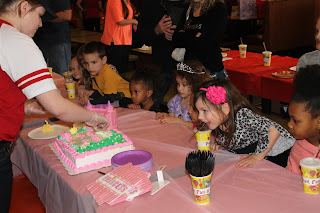 We arrived home and I had plans to crawl in my mancave and be alone for a few hours.  However, I noticed the rain was really coming down.  I asked the twins "who wants to go for a walk in the rain?"  Layla jumped at the chance while Easton just wanted to go play in his room.  Fine with me!  Layla and I suited up in our rain gear and headed out the front door. 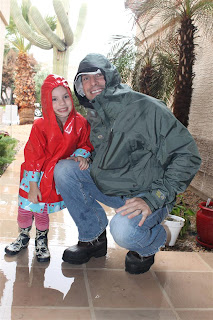 We splashed in a couple of puddles as we walked down our street.  I looked down the sidewalk to our greenbelt and noticed it turned into a pond.  We walked down to get a closer view and saw a raft of ducks! 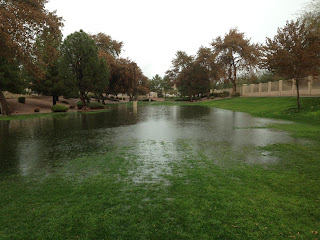 We walked along the edge of the pond to our back door and invited Easton to join us with promises of a  new found adventure.  He agreed and off we went to splash and play. 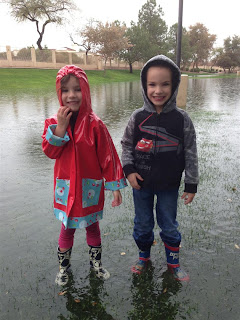 I caught a self-portrait because there was obviously no other neighbors crazy like us out in the rain to take our picture.  I love shocking them by doing crazy stuff like this together.  I shrugged my shoulders and gave my typical response of "why not?"  and away we went splashing in the mud. 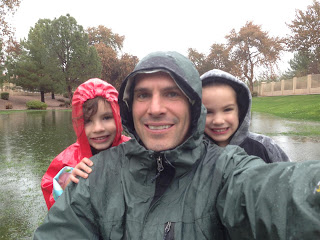 The three of us waded out deep into the center of the greenbelt.  The water got so deep it was higher than the tops of our boots.  They flooded with water and we laughed hysterically while sloshing as we jumped. 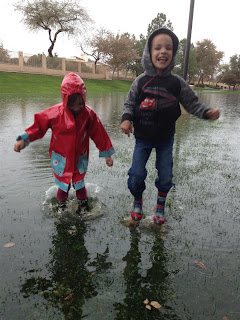 Our pants were wet, boots were filled, and at one point they both admitted their underwear was soaked.  The twins were having a blast, but I could tell it was getting a little chilly for us so I gave them a chance to wade across one more time. 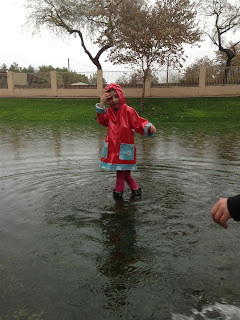 They will probably never forget this hour of bonding time.  I know I won't.  It's been mentioned several times since that day.  Rain of this magnitude only happens a couple of times per year and sometimes those occurrences are at night.  This rare alignment of elements made for a great day together.

On some other random occasion we were all sitting around in our pajamas.  Layla brought out her box of hair bows and asked if she could put one in my hair.  I agreed and she didn't stop until every last hair accessory was stuck on my head.  When I say to her, "Do you know what Daddy REALLY needs?"  She is conditioned to reply with, "a kiss and a hug."  She is more than willing to meet my need even though in reality I'm meeting her need too. 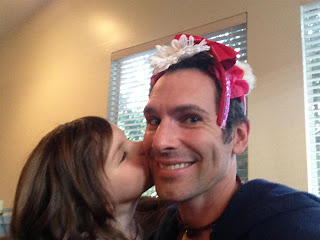 After the hair accessories were yanked out we did whatever Easton desired.   He wandered over to the hall closet and chose Playdough as his activity.  Nothing wrong with a little imagination to create all kinds of animals and scenes with a boat-load of Playdough. 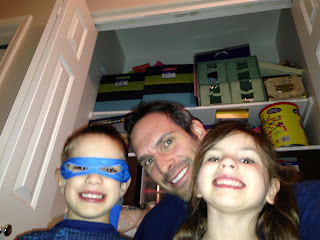 I took a day off work this week to indulge in a little getaway.  I won free tickets to the Phoenix Open with free parking, free meals, and free seats overlooking the 18th green.  Talk about going in style!  This was by far the most elegant way to attend the event that draws over 500,000 attendees.  Best seat in on the course?  for free?  Not bad for a lowly corporate lackey. 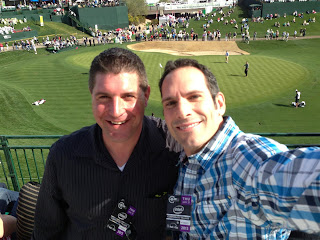 Once my afternoon of vacation away from Kendra and the kids and work was over I was happy to jump  back in the groove.  Teenage Mutant Ninja Turtles?  Absolutely.  There will be Phoenix Open tournaments every year from now until the day I die, but Easton and Layla will only be four for a few more days.  Cowabunga, dude! 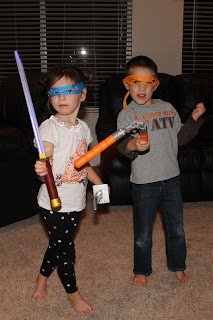