Hey family,
We are kicking into high gear with the whole "love your neighbor" thing.  With spring weather approaching we'll be having more front-porch-sitting time.  Kendra and I are being the light in the world because we were never called to be the light in the church building.  This is the only girl on our street who is close to Layla's age and she happens to have very similar beliefs to our family.  And she is also similar to Layla in her adventurous spirit of finding frogs in the pond.  Makes me so proud.  :) 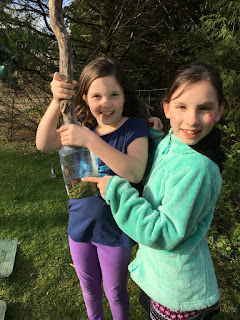 And our next door neighbors are getting a full dose of the 4 Webbs because we are loving on them as intensely as they will allow us to.  Instead of zero sunny days per week we are averaging one sunny day per week.  It's an improvement we are making the most of.  Here is Layla coloring with our next door neighbor on a blanket in the front yard.  She is getting with the groove as we talk regularly about what it means to love our neighbors. 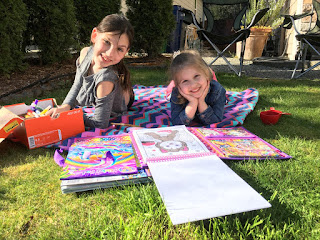 Layla is a figure skater, but she's dabbling into the world of cheerleading.  She joined a week-long cheer camp and we are extremely proud of her for jumping in (pun intended).  Every parent thinks their kid is the best at whatever thing they do, but I am not biased when I say she was the best in her age group.  She had a high school cheer leader pair up with her as her buddy through the learning and performing.  I know cheer leading can get expensive, but it sounds like there is a way for her to be involved without having to go all-in crazy with time and money.  we're just letting her explore some new things to help her discover her passions. 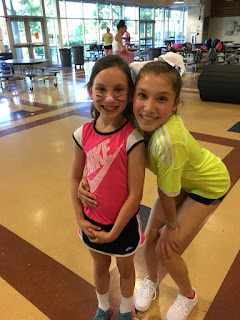 On the last night they invited the parents for a performance.  Layla was loud and proud through every cheer and the thing I enjoyed the most was watching her be genuinely enthusiastic about it 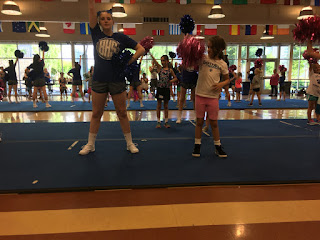 The end of school finally arrived.  The twins started early in the fall in AZ and ended late in the spring in WA.  They attended four 3rd grade schools if we count Kendra's month of home schooling them.  That is a ton of transition and adjustment, but their grades help up and their spirits did too.  Here is a pic on the first day of 3rd grade and the last. let the summer begin!  that means we get many beach days.  we took Max to Medowdale beach park for an afternoon of playing in the sand and soaking in some sun.  The twins found shells and seaweed and all manner of weird creatures to explore.  This is probably one of the last pics we will ever take of us giving them a piggy back ride because they are just so tall and lanky it barely works for us to hold them this way. 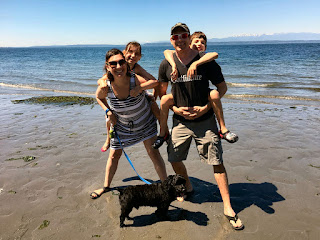 We walked along the beach with handfuls of sand and gross stuff.  Easton and Layla both like to squish it in their hands and throw it in the water.  We are big encouragers of Layla feeling comfortable getting her hands dirty (literally) and being a well-mannered princess.  She doesn't need a label or her friends to tell her who she is.  One of the great things about Kendra is her versatility in being fully womanly and willing to get her hands dirty with rough and tumble play or digging in the sand. 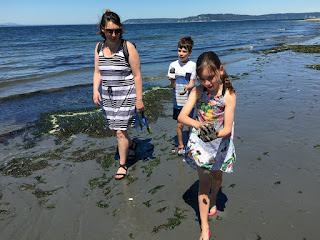 I am grateful for the way our twins still see each other as their best friend.  They play together so well.  There are definitely times where they bug each other, but I like how they are forced to understand and cooperate with the opposite sex.  It will serve them well when they get married. 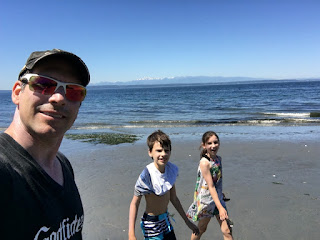 We brought snacks and the twins laid out in the sun to get some toasty buns.  Layla's normal bikini tan lines are non-existent for the first time since they were toddlers.  My pasty-white skinned kiddos are becoming fully Seattle residence without their AZ tan.  ﻿ 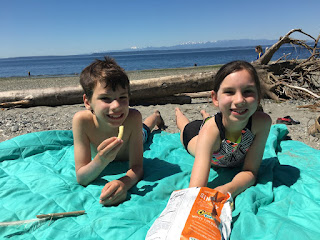 Easton said they made a tide pool for the tiny crabs they caught.  being constructive is a core value of the Webb house.  I'm haven't defined the full list of core values for us, but I regularly tell Easton he is a constructive boy as a way to bring out the real Easton instead of the occasional destructive actions he does.  That being said, he discovered the excitement of breaking rocks with a hammer.  I know it doesn't sound like a big deal, but I was happy for him to head out to the front sidewalk and smash the rocks into dust as he enjoys seeing what's inside.  I like his curiosity. ﻿ 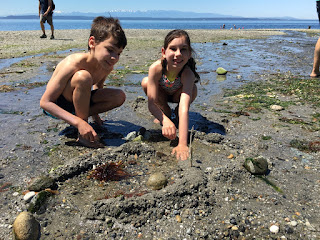 The thing I am having trouble with is his lack of caring about his hygiene and clothing.  He would wear the same outfit ever day and never shower, if we let him.  He grabbed his Velcro shoes and I said, "let me see the bottom of those".  He stuck his feet up in the air and I see this...  completely worn out soles that don't even have enough tread to be water proof.  oh well, there are bigger fish to fry than forcing him to wear proper shoes for playtime. ﻿ 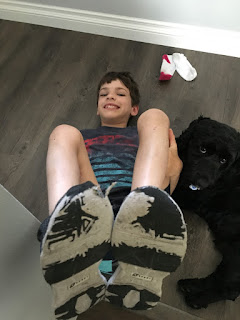 I took Easton for a dual haircut outing.  my hair gets bushy on the sides and his grows like a chia pet all over.  What I noticed most when he was getting his done is that he is so kind and respectful to the hair lady.  They werent engaged in conversation much, but when they did interact I was proud of his demeanor and responsiveness.  Everyone says he looks so much like me and I take that as a compliment every time. ﻿ 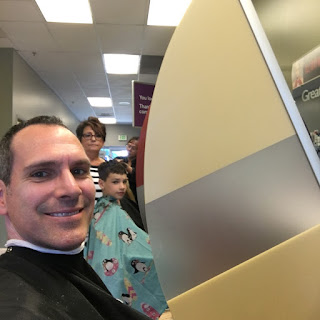 Uncle Wayne will be living in Washington with Dawn Marie in a few years.  Kendra went to Sacramento with the kids so they weren't here for the time Alaysha and I spent with them before Dawn Marie took a flight back to Wisconsin.  Once she is ready to retire they will move to Goldendale, a few hours away south of Seattle.  We had one evening together with dinner, coffee, and a long walk by the river in town.  ﻿ 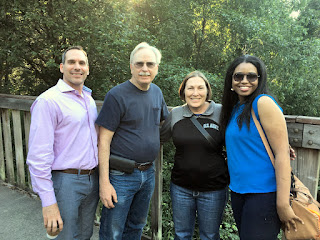