usually my posts are mainly focused on the twins because that's what the blog is all about, but this one is mostly about me and Uncle Wayne.  As we shift into summer gear, it is becoming obvious how the twins prefer to spend time with friends more than me.  I'm ok with it, but nobody told me it would be a toggle switch moment in time where virtually overnight Easton and Layla became independent.  They are gone when I arrive home from work and I get about an hour with dinner and bed time routine each night.

Speaking of work, I took a field trip with my team and we went to the western air defense sector where they monitor the nations air traffic.  I also toured the C-17 training facility and had the opportunity to sit in the cockpit of one. 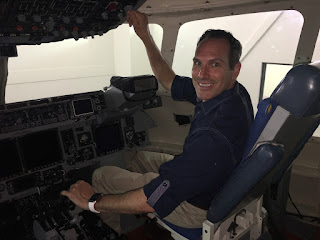 talk about a monster airplane.  these things are massive and powerful.  We met with the colonels and high up ranking officials.  it was a once in a lifetime field trip.   ﻿ 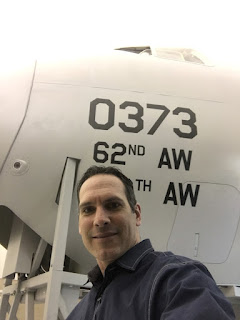 Other than that I've been grinding through the weeks waiting to take my extended summer vacation starting in mid-July for a couple of weeks of family fun.

My mom's brother is Uncle Wayne and he visited us for a few days.  He brought his dog, Piper who was gentle in our house and older than dirt.  His wife flew into SeaTac so they can go to Goldendale where they bought land to build a retirement house over the next four years.  I've only seen Wayne a handful of times in the past three decades, but he is family and we connected on so many levels during his stay.  We visited him in Tennessee a few years ago on our US tour.  It was great to catch up.  We were all worn out like dogs from the local adventures. 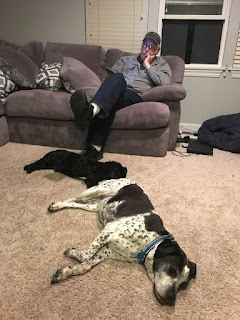 We went to Marymoor park to witness the largest off-leash dog park we've ever seen.  Piper loved it. 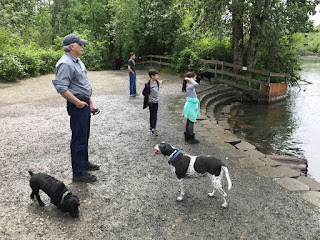 The twins were a personal tour guide with all of the excitement we've come to expect from them.  I'm proud no one fell in the river and the dogs were well behaved.  ﻿ 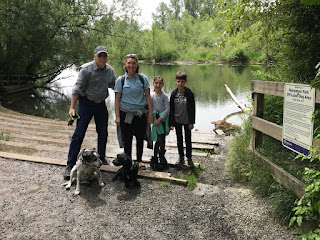 It's rare for the 4 Webbs to get a picture of all of us because I'm the camera man of the crew, but with Wayne there he snapped a picture of us giving a big family hug.  It's very odd for me to imagine wearing a stocking cap and jacket in June, but here I am trying to stay warm.  ﻿ 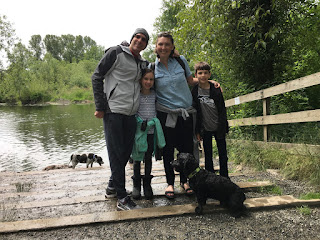 There were about a hundred dogs running around the property, but somehow we were able to capture a pic like this where it looks like it's just us alone.  everyone needed a minute to rest from our hike through the park so we sat here and commented on the interesting dogs that walked by.  ﻿ 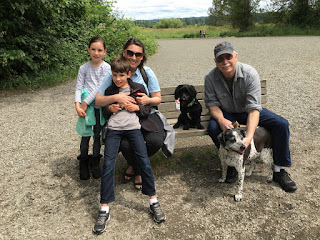 One of the outings was to the Museum of Pop Culture in downtown Seattle.  Wayne likes sci-fi and fantasy so we took a trip to the best museum I've seen in many years.  They have an amazing collection of movie props and costumes.  This is THE costume from the original Tron movie.  There is a significance to this movie between Wayne and I that I haven't thought about for years.  When i was seven years old I went with my mom and uncle wayne and some other people to go see Tron.  towards the end of the movie I was frightened and asked my mom if I could leave the theater.  Wayne kindly agreed to wait outside in the lobby with me until the movie was over.  ﻿ 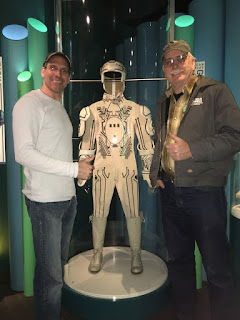 There is a section of the museum dedicated to gaming, but we ran out of time to go see it.  We couldn't pass up the chance to take a picture in super Mario bros. world though.  Wayne hasn't been around kids... ever...  but he's really great with them and appreciated the time with the 4 Webbs.  ﻿ 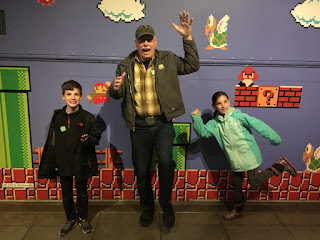 I, on the other hand, am used to the noise and energy and involvement.  Being silly with them is something that will never change.﻿ 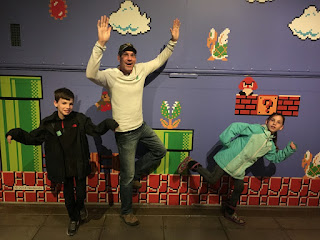 When the kids went to school I took Wayne and our dogs to useless bay on Whidbey island.  We walked a mile on the beach just talking and watching the dogs play.  ﻿ 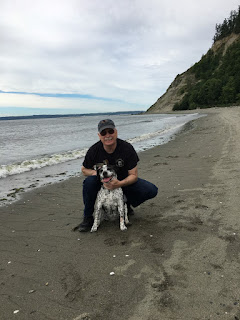 Piper is a fetching kind of dog and a water dog.  this is her first time in the ocean and it was awesome to see such an old dog forget she's old and go have fun even though it probably hurts her aged hips.  ﻿ 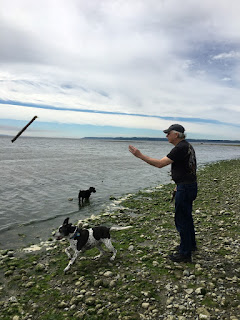 Max is not a water dog or a fetching dog, but today he learned to be!  I found his own stick to throw and after watching Piper do it a few times, he jumped right in and returned he stick to me.  ﻿ 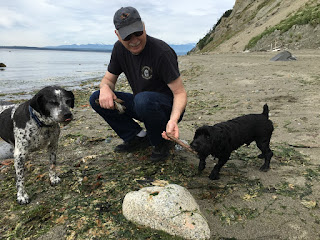 Much of our time was spent talking about the things of God, but he was kind enough to help me install the ceiling fan in our master bedroom.  Summer is here and mama is hot!  Kendra was very grateful for Wayne's home improvement know-how and I am glad to have a cooler wife as the days heat up without AC in our house...