The weekend after Kendra and the twins arrived home from a 15-day trip to Sacramento, I loaded up the twins and headed to the mountains.  Leaving Kendra in her freshly cleaned house alone for a weekend was hard for me to be away from her, but happy for her to have some peace and quiet.  Wouldn't it be funny to name my twins Peace and Quiet?

Anyway, this is my primo photo from the trip showing the sun, the forest, the river, the rustic railroad bridge and three smiling faces.  We had a blast.  No major injuries = successful camping trip. 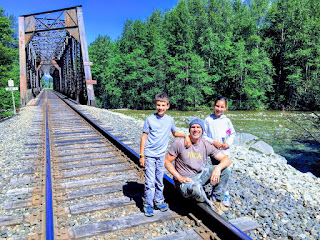 but wait!  there's more!  Our next door neighbors joined us for the weekend.  Clay, Kain, and Rowan made this a daddy campout times two.  His wife stayed home as well so the six of us had a memorable time together. 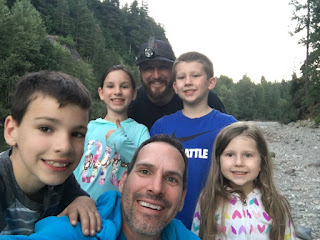 We did some semi-dangerous things like walk out on a railroad bridge, knowing a train could come at any moment.  The scenery was just too much to capture in a picture, but this is a decent representation of what we experienced.  Our weekend in the Cascade mountains was much richer and different than I expected.  The last many years of camping in the desert has it's own beauty, but setting up our tent next to several 60 foot tall trees was a whole new ball game. 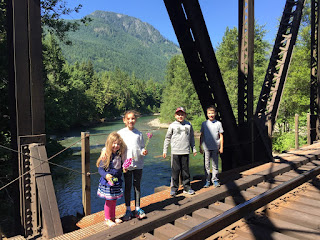 On Saturday afternoon we took a trip into the small town of Skykomish.  The names of many towns in Washington are Indian so they sound very odd to me.  Anyway, we heard a tip from our campground host that they have free train rides.  He was right!  This ride-on train took a loop around the property.  It was a longer ride than expected and that was a good thing.  We all rode it once together and then the kids rode it without the dads twice. 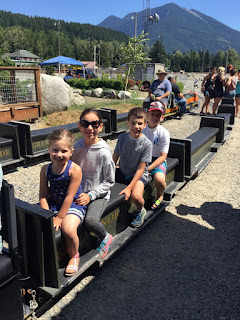 There were two trains on separate tracks and this guy rode facing all the passengers every time.  kind of creepy to be stared at the whole time, but not enough to deter us from riding it again. 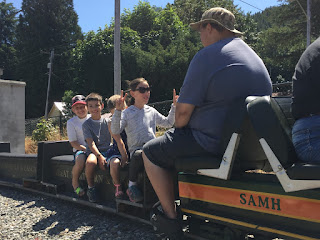 The train conductor driving the train looks exactly like you might imagine one to appear.  These are all volunteers and the nicest people you'll ever meet.  The tunnel was super fun for Rowan, the five year old, as well as the bigger kids.  Us dads screamed loudly as we passed through it, much to the embarrassment of the kids. 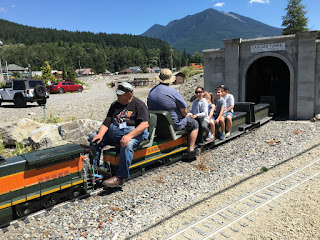 Back at camp we had a great fire both nights.  wood was purchased at $6 per tiny bundle of logs from the camp host because although we were standing in a FOREST it is illegal to chop dead wood for logs.  so here's us, following the laws because that's just what we do. 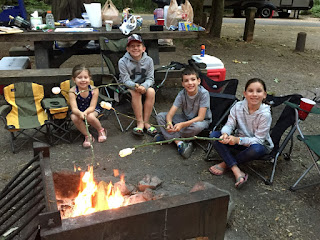 I brought an extra tent.  I told Easton and Kain that if they want to stay in their own separate tent, then they have to put it up all by themselves.  no whining, no instructions from me, and definitely no help from Layla, the extreme helper.  Well, they did it in record time just as I expected.  It's amazing how resourceful and full of grit these boys can be when there is something on the line. 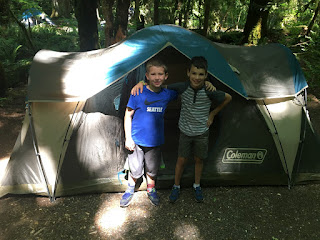 As they were getting ready for bed they poked their heads out of the tent to keep the mosquitoes out while responding to Clay's instructions. this sums up their friendship really well.  Easton has never had a best friend before, but these two get along so well and like to hang out every day if we let them. 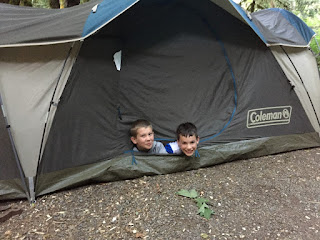 These pictures are out of order because i'm lazy. just and FYI.  When we first arrived at camp, Kain rode with us to stake out the camp sites and lay claim to one.  We jointly decided on a sweet one between the main road and the railroad tracks... because all of them were in the same lousy location. 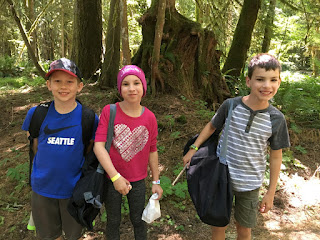 The saving grace was the river a few yards away from our tent.  we went down to check the current and conditions.  I staged this shot for grins.  It's my favorite one of the trip too. 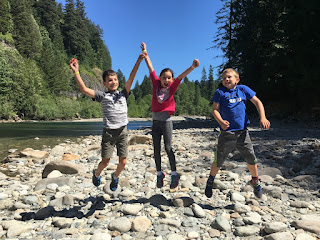 Layla and Easton brought their water socks because we are overly cautious parents who don't want our kid's feet being lacerated with glass or barnacles.  Layla looks much older than nine.  Some moments I look at her and think, "wow, she's already a young lady?!" 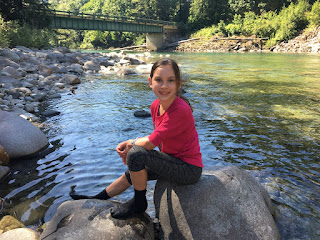 The only good part about the railroad tracks being so close is the excitement of watching a train go by. We were up close and personal with this train with 125 boxcars in it. 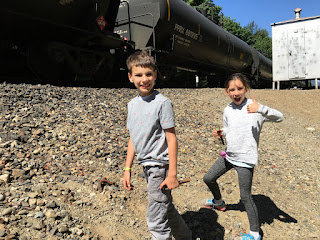 I requested Easton and Layla to hold hands and walk down the railroad tracks.  This is not a normal thing for them to do, but their hearts really are like this when it comes to friendship.  They are best friends and we are fortunate to have set that foundation from birth. 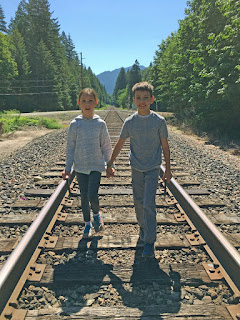 As with all of our campouts, we ate like ravenous raccoons including ice cream for afternoon snack overlooking the river. 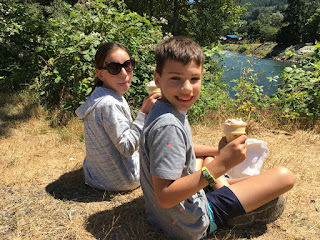 We asked the camp host where to go for a river with a beach and he directed us to a bridge on an abandoned highway.  We walked down to the water and found a jewel of a location where the water wasn't too deep or fast moving.  Easton looked in the water and saw a newt or salamander creature moving.  He bravely scooped it up and we spent the next two hours making a newt zoo. 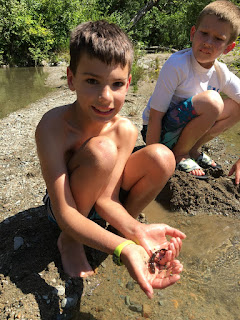 Clay built some dams with sticks and rocks and mud.  the water flowed through and the creatures stayed put. 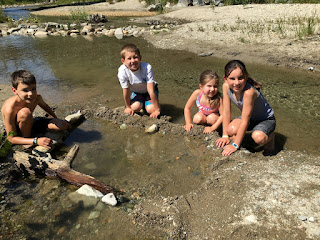 Layla jumped in on the action and caught her own collection of newts (or salamanders... whatever they are).  She gave them names like daisy and rainbow and jumper.  This adventure was the most memorable one of the trip.  We were splashing and playing and catching these things until we were water logged and hungry. 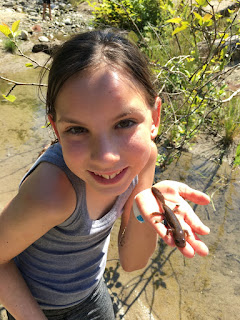 Easton discovered the joys of using a hatchet on dead wood.  This stump was fair game for him to whack away although the blade was so dull that it barely stuck in the wood. 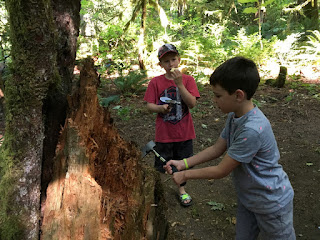 On the other side of camp, Layla and Rowan were coloring pages from her coloring book.  They got along so well.  I'm proud of Layla for being a big sister and taking care of her. 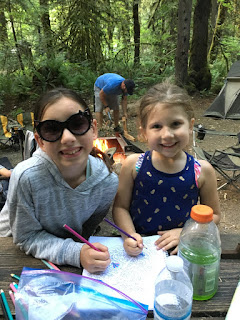 We watched the sunset by the river as we avoided mosquitoes and skipped rocks.  I skipped so many rocks that my elbow as sore.  The boys were throwing rocks up in the air and watching them break so they can look inside.  They are little, inquisitive explorers. 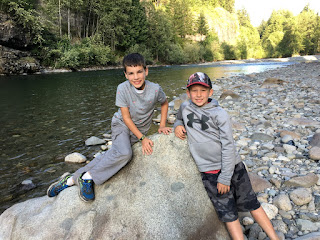 The water wasn't as cold as I expected.  It was tolerable up to our knees, but that's it.  There was no sitting in a tube and floating down the river.  forget that!  The warm sun and cool water with sand between my toes was good enough to get through the days.  Besides...  it was the only bath or shower i took in 48 hours. 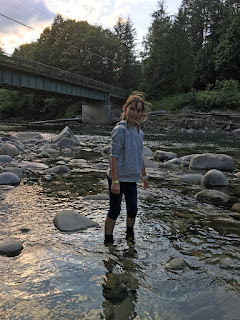 The trees are indescribably huge.  I don't even have a scale to reference how tall and wide they are.  I stood the kids up in front of this one for a little perspective, but it doesn't do justice at all.  Our tent was nestled in between two massive trees with moss growing on the branches.  It was a unique experience all the way around and I hope to repeat it often. 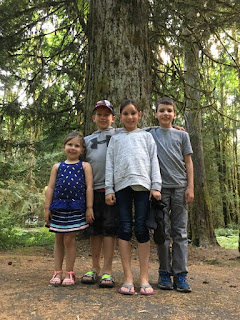